All projects on hold for the return of Gurggl Greenwake.

I have put the Skaven army project and the Chaos Nipponese project on hold.

After chatting with my old friend Justin, who runs the excellent Masterwork Guild Blog : http://themasterworkguild.blogspot.co.uk/  we have decided to stage a 5,000 point a side 3rd Edition Warhammer Fantasy Battle game. Justin will field his Wood Elves, and I have decided to field the Slann.
For us it is a classic match up as both of our armies fought against each other many times in the 1980's and early 1990's, and I am really looking forward to it and getting back to painting up some Slann for a while. Once the Slann painting is completed I will get back to the Skaven.

As I was in the middle of a repaint and remodeling of my Slann army before I decided to focus on other projects, it means that I have to switch my focus to getting the Slann army up to speed. This is'nt as a much of a task as it sounds, but requires me to paint:

one regiment of 10 Warrior Priests,
one War Altar on a littler, with 4 Warrior Priest Guards,
finish off the repainting of 40 Spawn Bands,
base 20 Jaguar Warriors,

all in about four weeks. This should'nt be too much to handle, although I need to knuckle down to painting as I have been a little lax in painting recently due to sunny weather and lethergy after work. We plan to stage the battle at Justins on his new gaming table with me travelling up north, to Surrey.

With the remaining points I might buy an Animal Handler with a pair of Giant Scorpions, or maybe another Wizard. I might use the Ambulls as stand-in's for the Giant Scorpions, as alien monsters drawn from the universe by powerful magics to do the Slann's bidding!

We have both deceided to avoid using Level 25 Wizards so as not to use Level 4 magic.  Normally in my army updates I would explain the tactical plans for the army, but in this case I'll leave that for the post battle report.

I thought it would be fun to have the army led by Gurggl Greenwake, the hero (and hopefully victor if you played the Slann right!) of the 'Magnificent Sven' scenario in Warhammer 2nd Edition. I thought it would be fitting as he had Generalled the army in the 1980's, and because Kremlo is to General the 3,000 point list I wrote last year.

Here is a quick look at the list of what I am to paint: 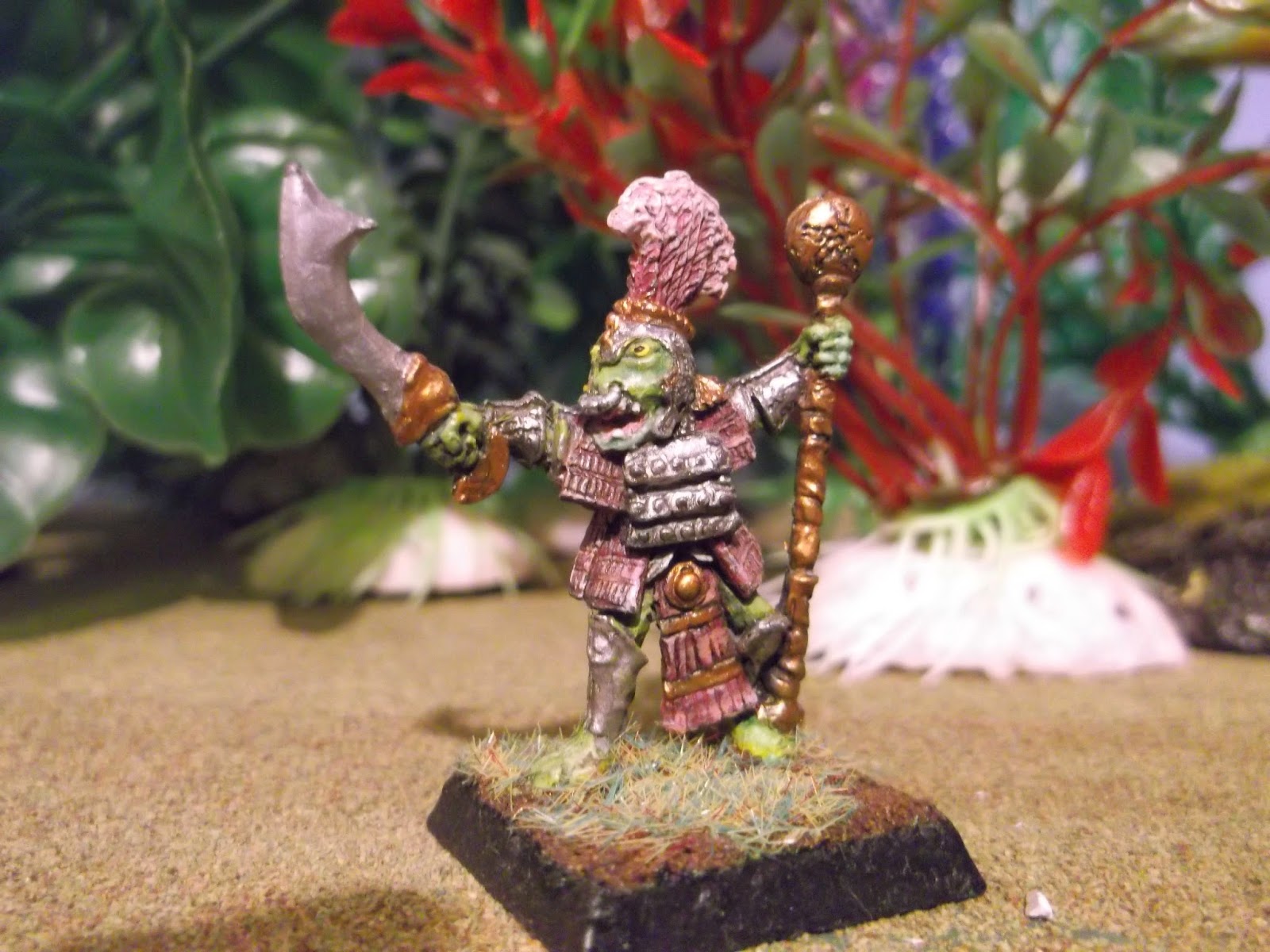 Gurggl Greenwake, Army General and vanquisher of Vastervik. ;)
He does'nt need repainting or tinkering with. 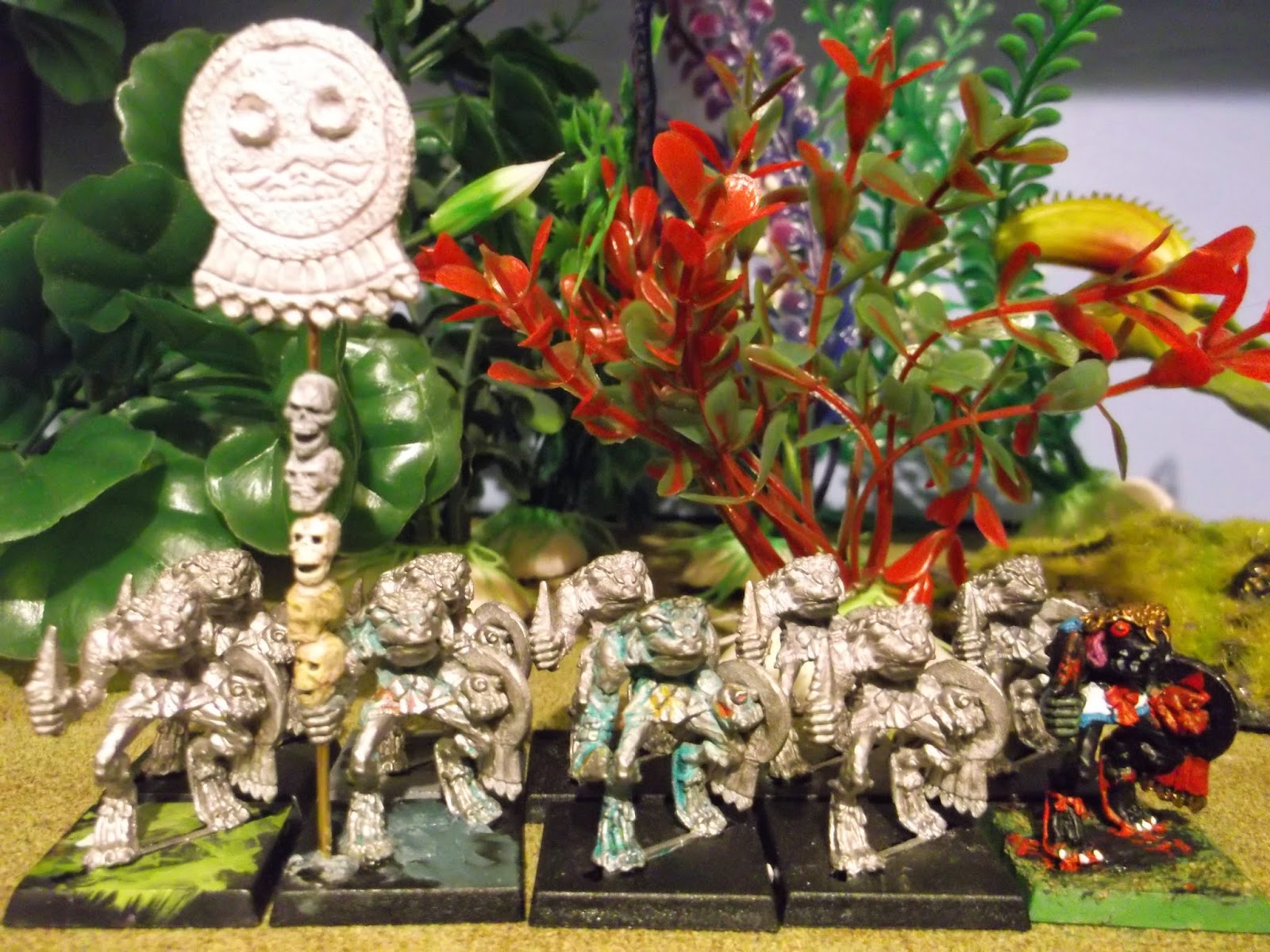 10 Warrior Priests with Bane Banner.
The banner is made from a a 'Smiling Demon' Aztec banner bought from Outpost Wargames, re-mounted on brass rod and with skulls on the pole, just give that added sacrificial horror from the Warrior Priests which the Bane Banner represents. 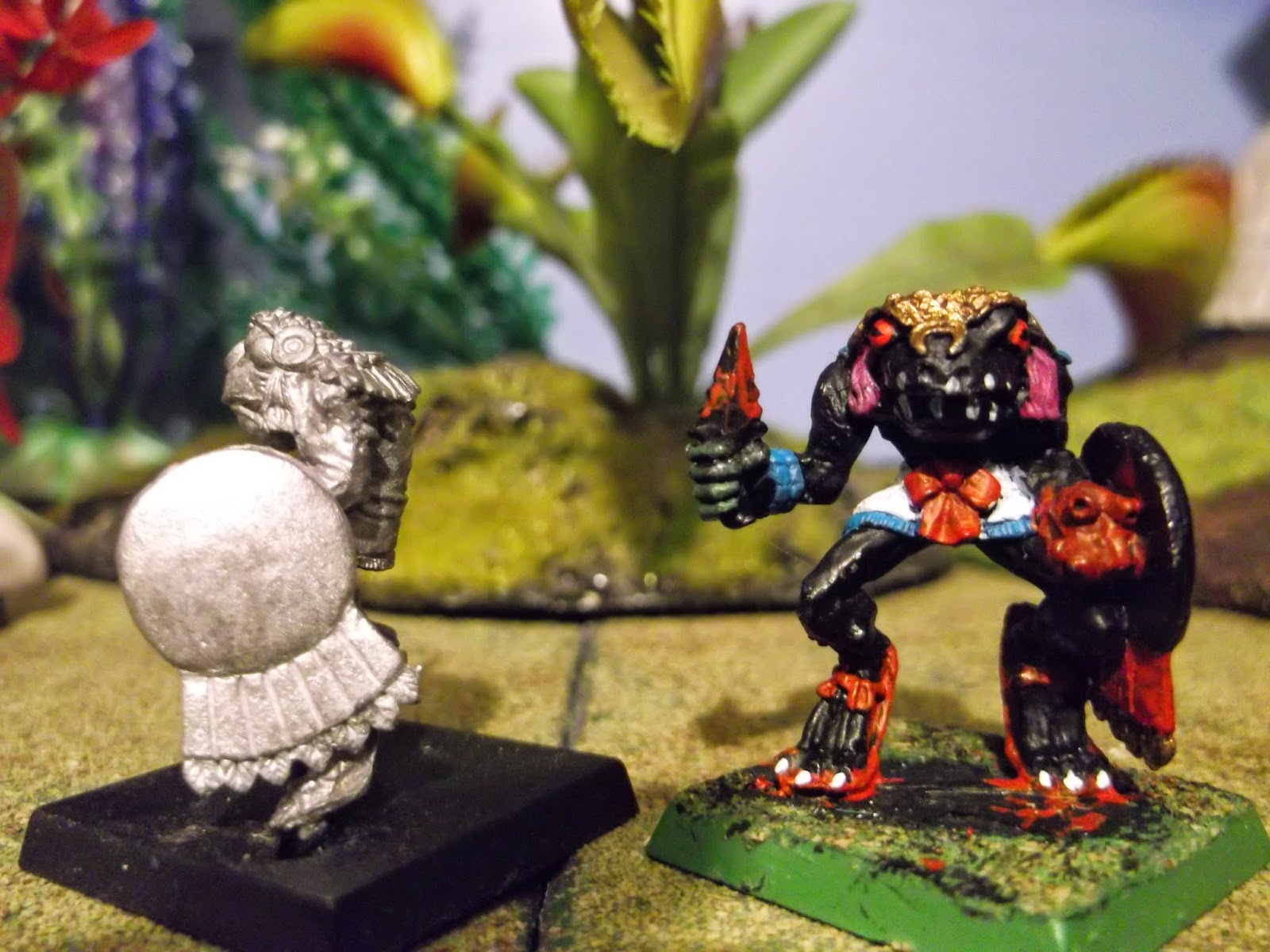 On the left a shield from Outpost Wargames, and on the right a test model from a while ago. I will largely keep to the paint scheme of the test model. 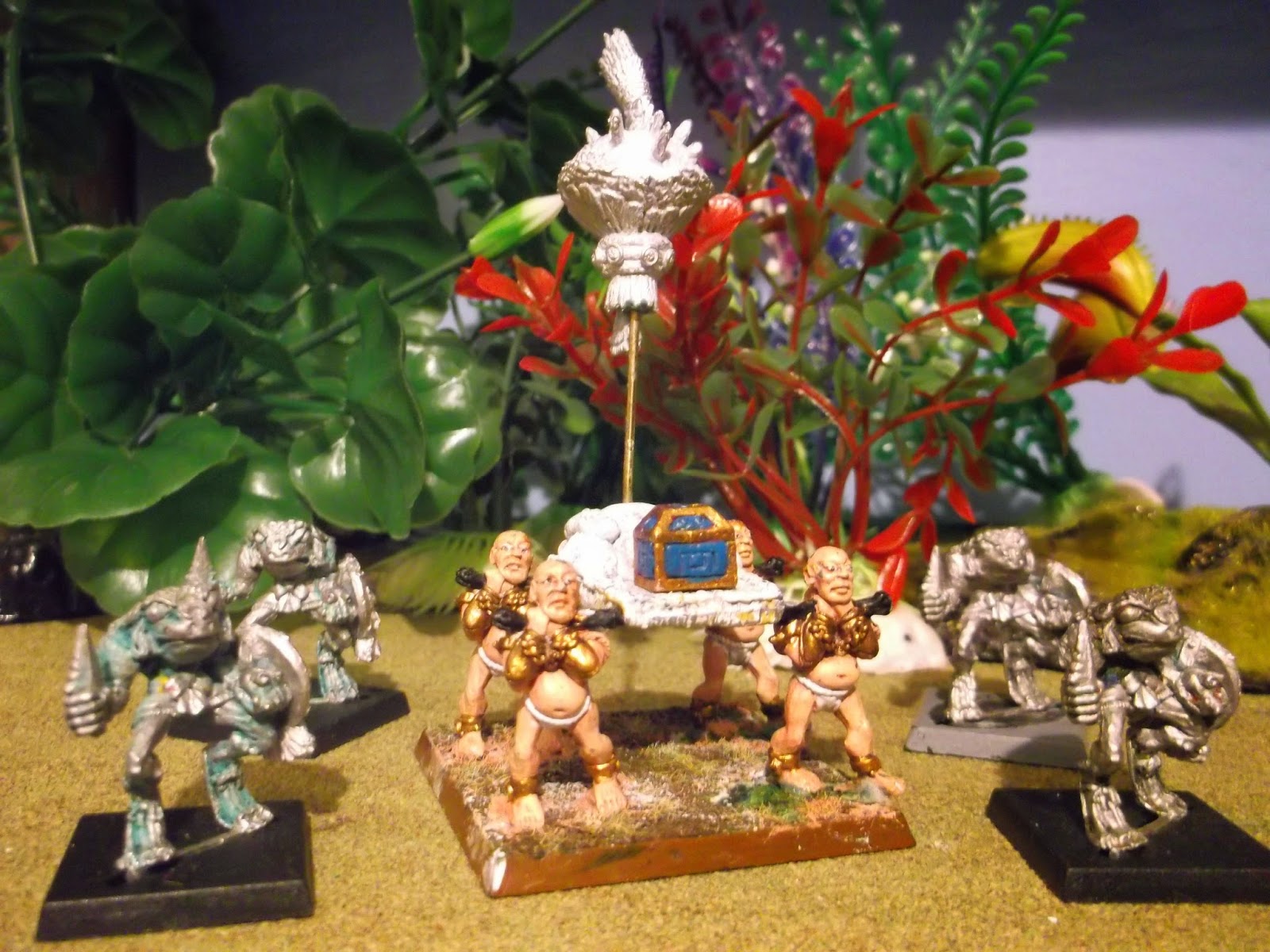 War Altar on Litter with Guards.
It is simply a Slann Wizards Palaquin without the two Slann on it, but with a little Citadel C39 range Treasure Chest on it, backed with an Outpost Wargames banner attacted to the back of the cushions.
To give it a better look, the model is based on a 50mm square base.
As an aside, when Warhammer Armies was released in 1988 there was a promotional deal for Mail Order customers where you could buy a basic army on offer. I placed a mail order for the Slann, and the War Altar was the Palaquin model above, but without the Treasure chest, guards, or course banner.
After taking the photograph I notice that the banner wasa little wonky, so I have since straightened it.
I have used the Treasure Chest to represent the remians of a Slann Wizard of great renown, hence it's use as a War Altar focus and being placed on a Wizards Palaquin. 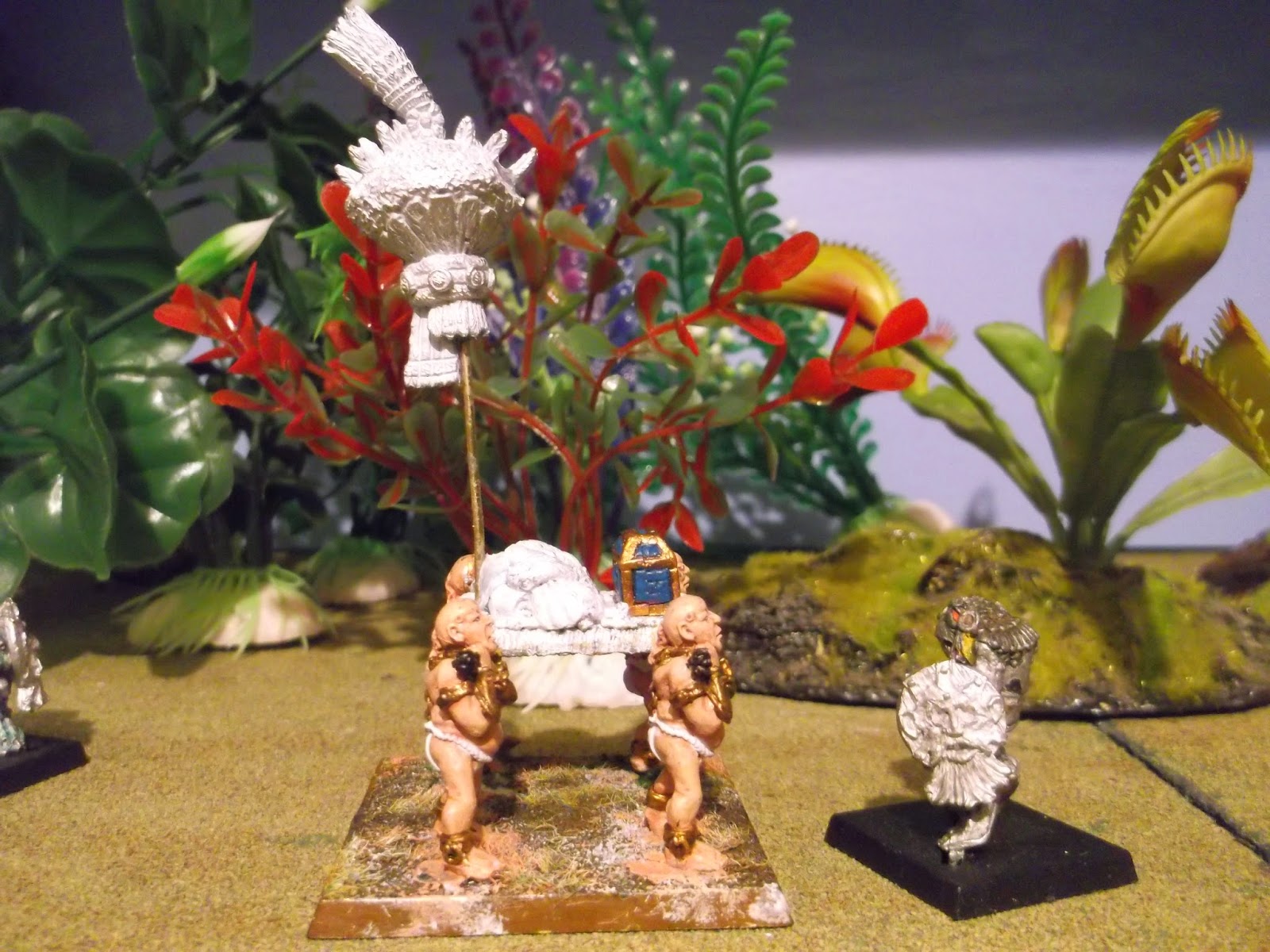 Side view.
For the Altar Guards I have given them an shields from Crooked Claw Miniatures Goblin Range which feature the flayed face of a Dwarf on them! 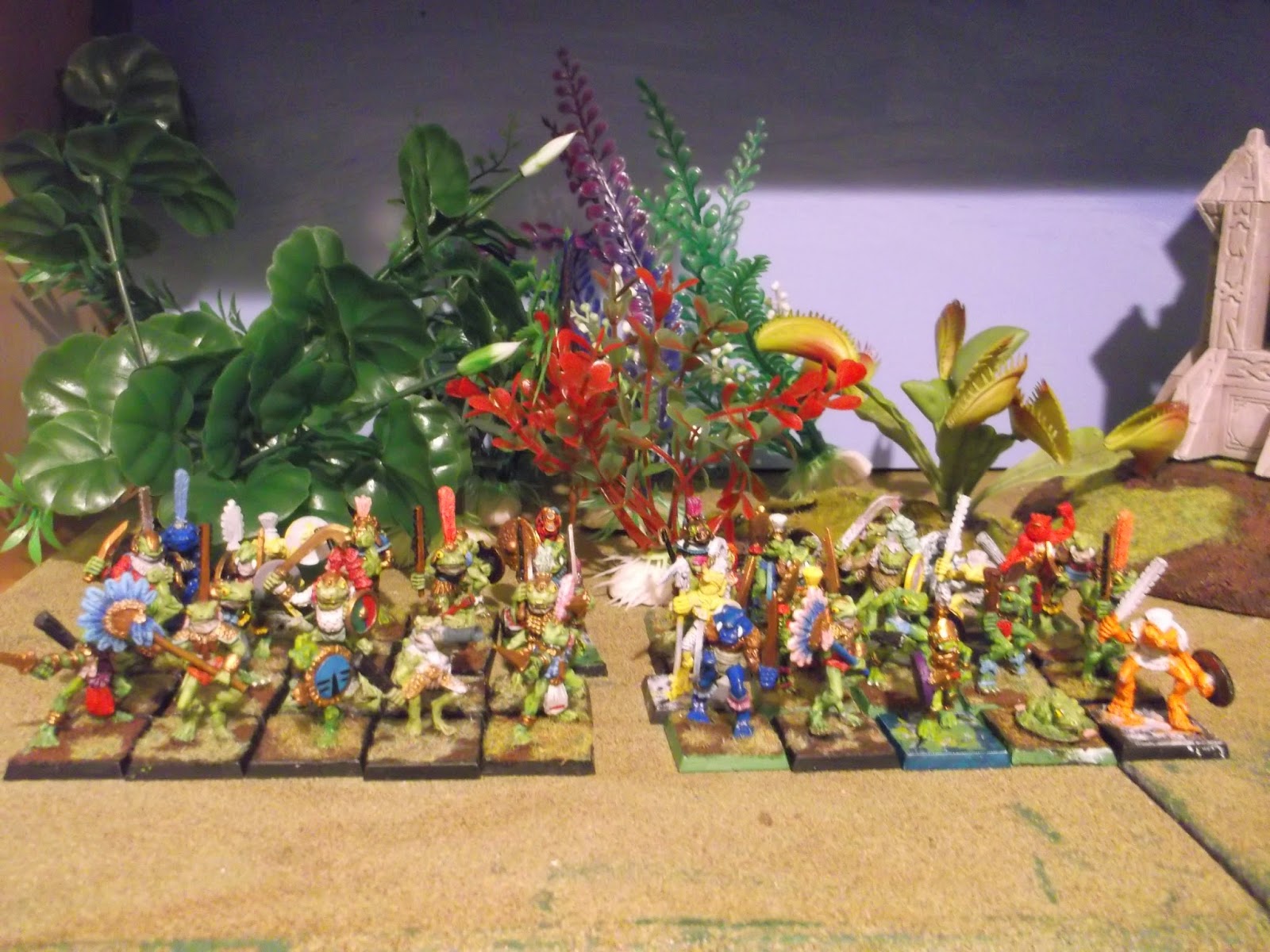 40 Spawn Bands.
About half of them are painted up the the standard I want. The rest require some painting or tinkering with. Instead of just painting the Spawn Bands flesh green as I had previously decided on, I thought I would give a mix of flesh colours to add more colour, but keeping about 60% of them still painted green. 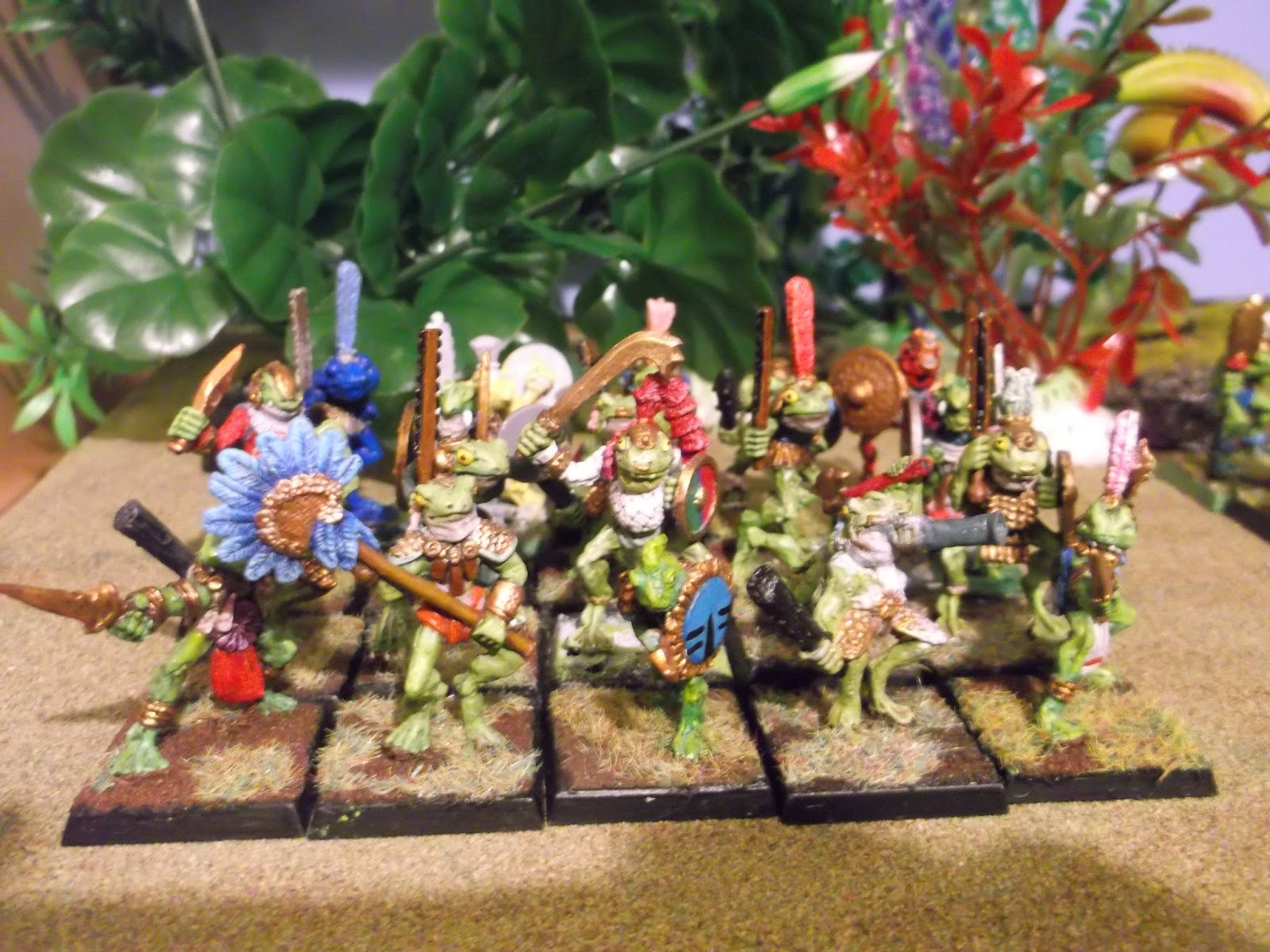 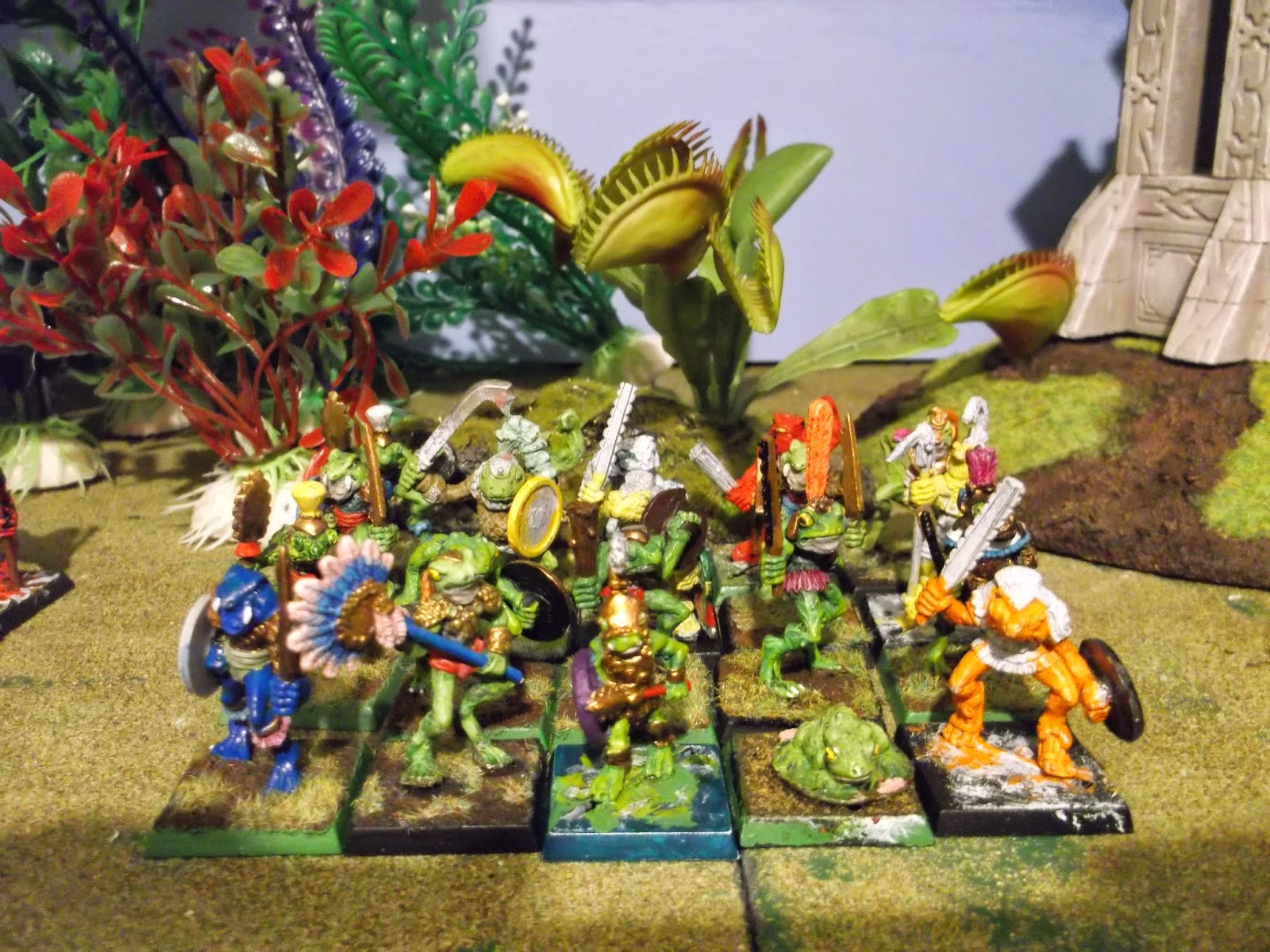 Spawn Band mostly not completed.
I have added the Talisman Toad model as a musician model for fun. 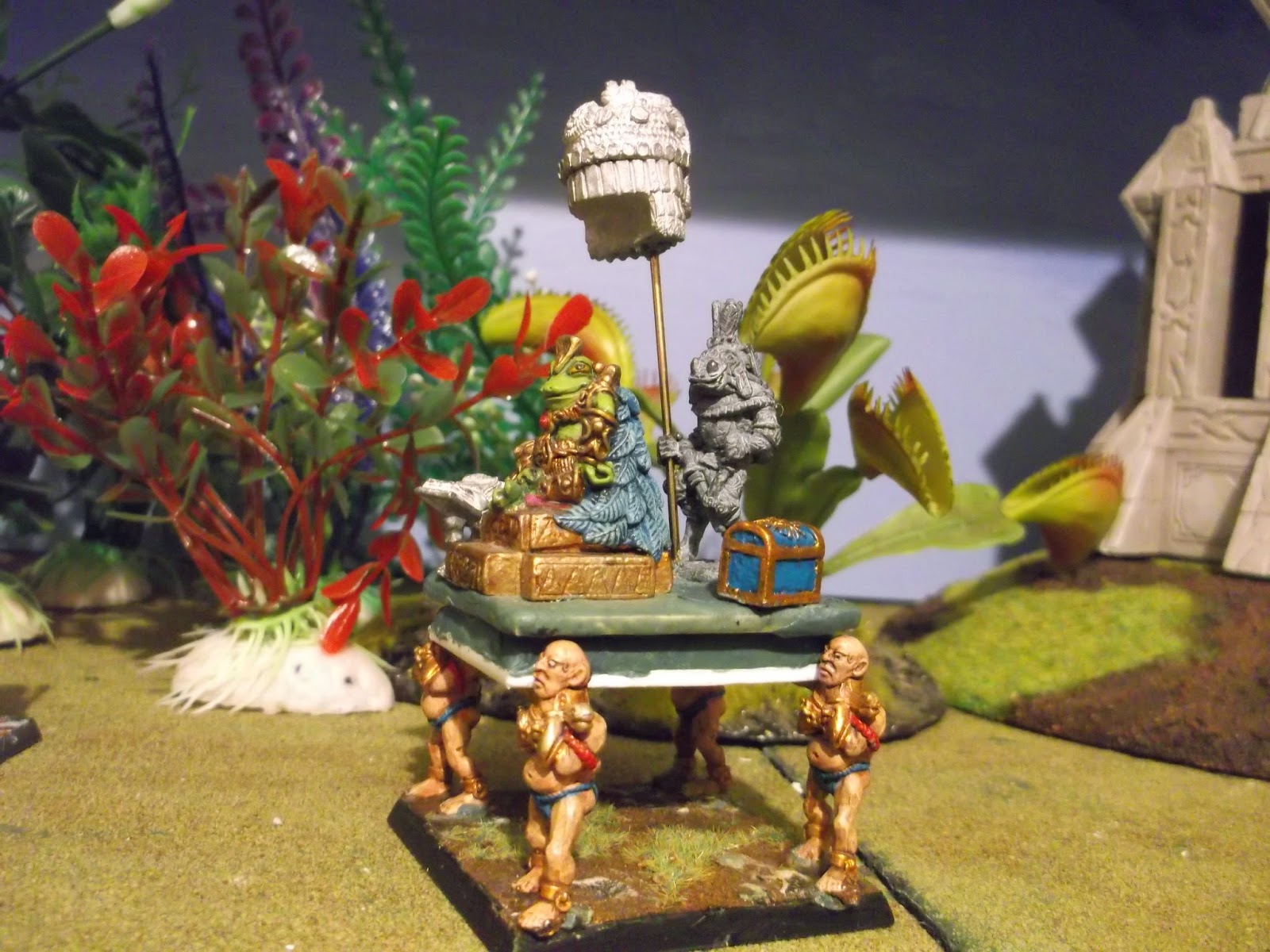 The Slann Emperor Model.
I have scratch built this model from a variety of bits, and changed it since the last time I posted it.
Gone are the unwieldly looking banners, and I have replaced them with a converted C23 pre-slotta Slann 'Herald' model to hold an Umbrella style Aztec standard from Outpost Wargames.
The Slann Emperor is the Coach model from Gaspez Arts, and they are both mounted on a sctrach built palaquin carried by C22 Slann Wizard Litter.
The whole model is a WIP an I am not planning on getting it finished for thegame as I have several other C22 Palaquin riding Wizards I can use. 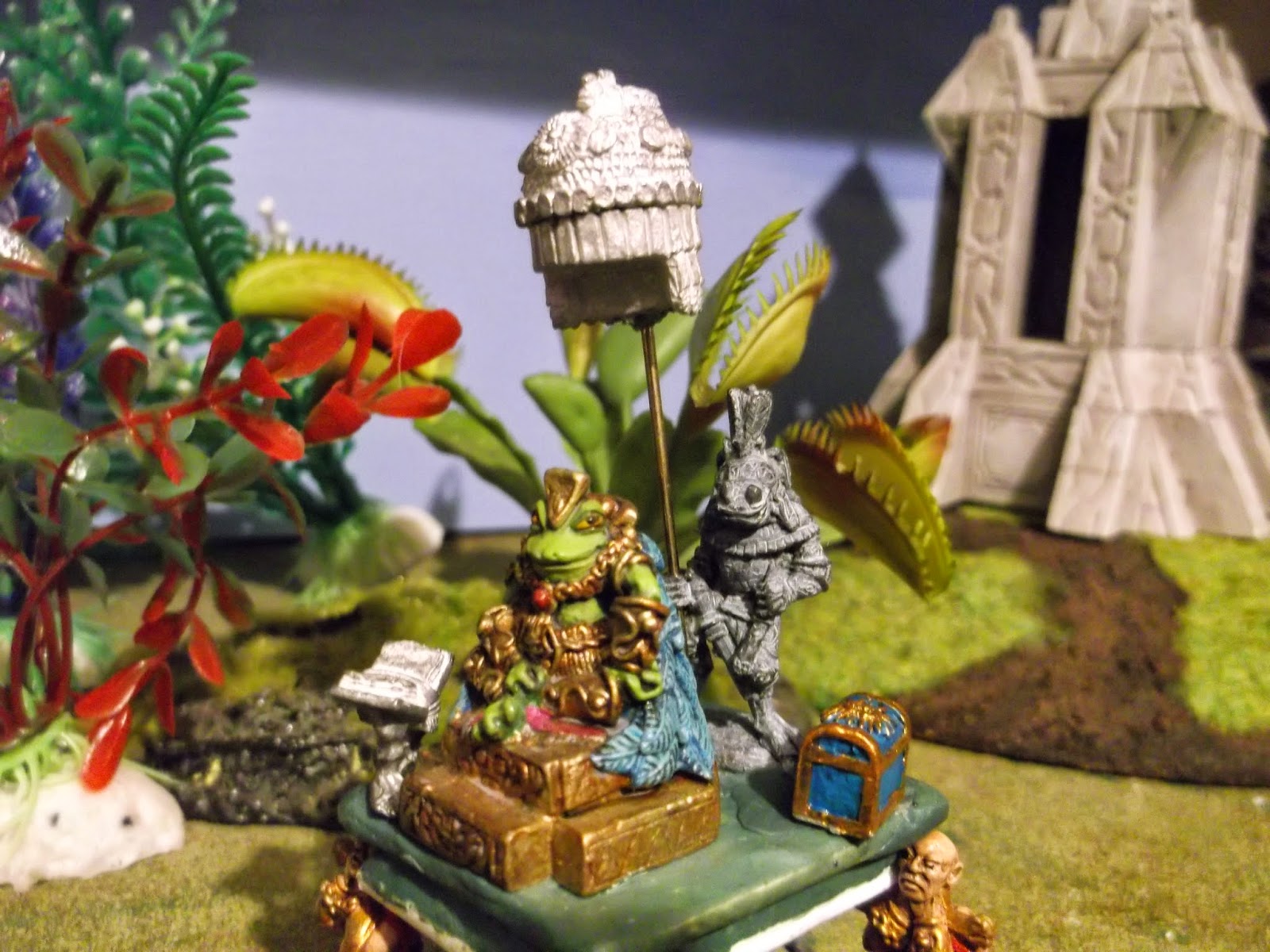 Close up view.
I have added a C39 Treasure Chest and a CH5 Chaos Sorcerers Familar named 'Walking Book' to add character, and niether of which are glued on yet as I still have finish the palaquin itself. 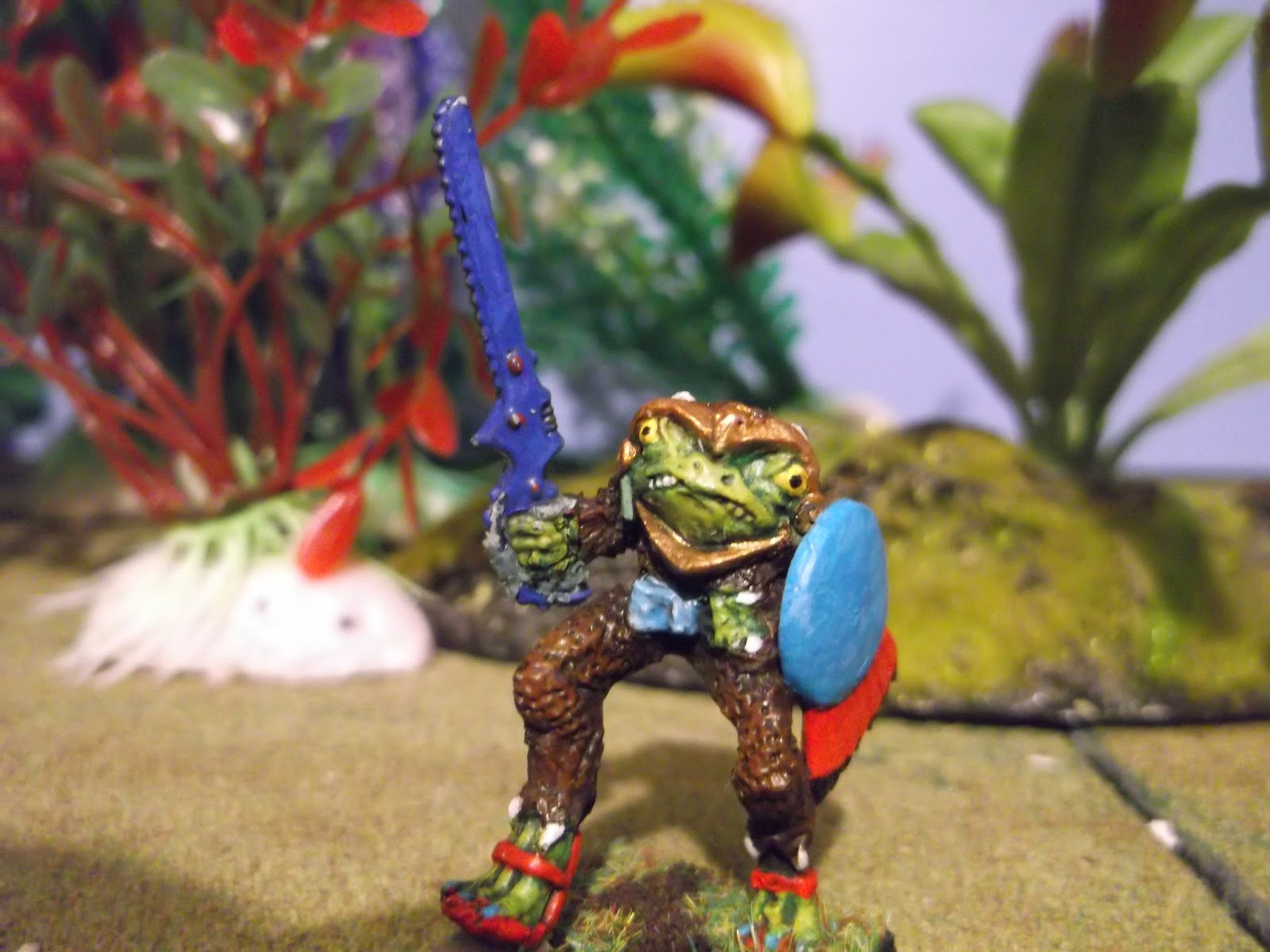 Eagle Warrior.
This afternoon I re-converted up one of the Eagle Warriors Heroes, losing the gold blade and replacing it with an Old Slann High Age tech weapon, in this case a slightly modified Rogue Trader Eldar Chainsword, which will need repainting. 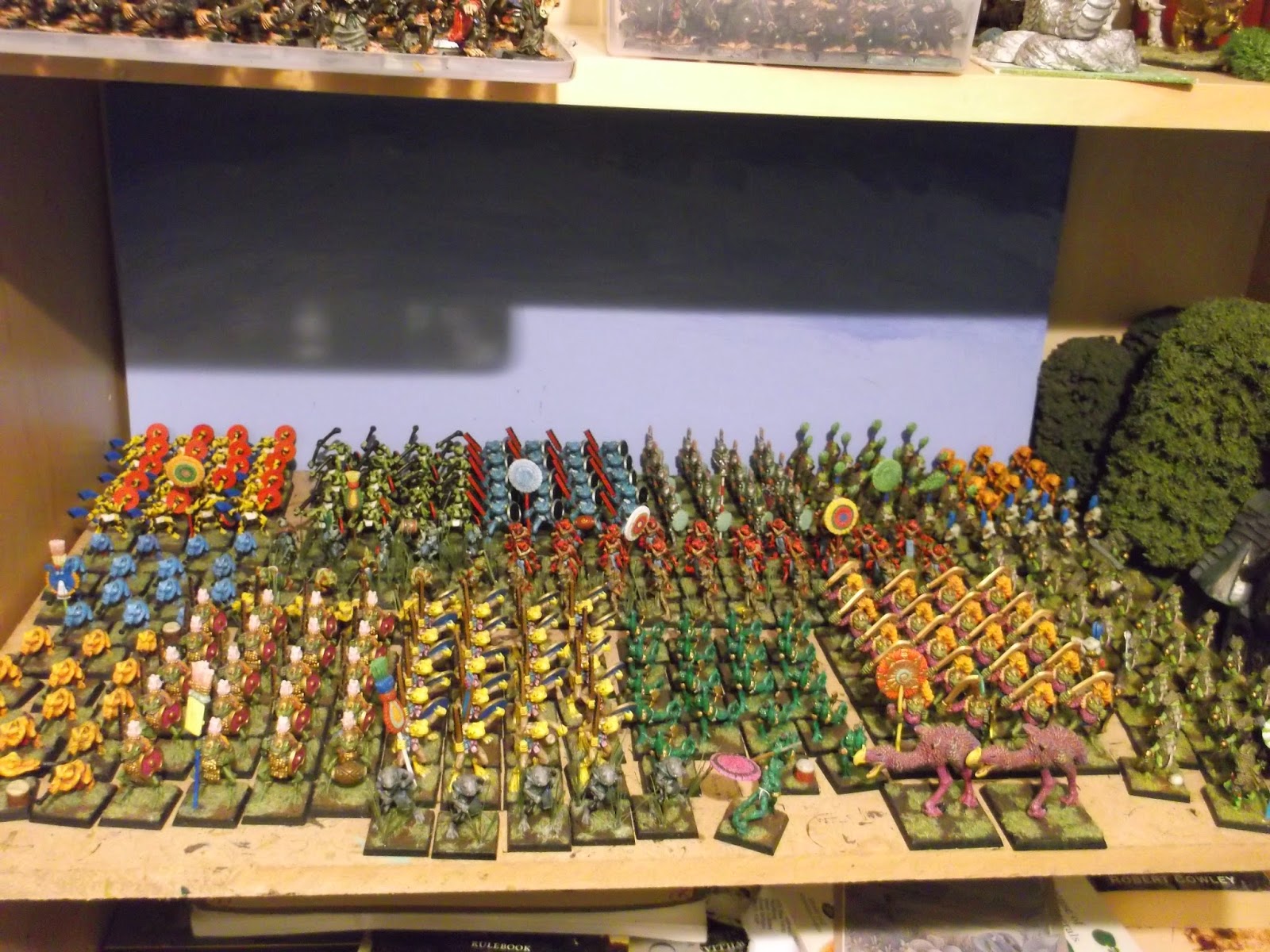 Most of the painted Slann from which the pick out the rest of the army.

Next update will be the progress of the Slann army, and also an update on Great Goblins/Gnolls as I have been picking up a few more on e-bay recently.
Posted by Goblin Lee at 23:43