...but I have been very distracted of late, and not been painting at all.

Work has gotten in the way, as well as a lack of focus, and a weird two weeks of being ill after a spider bite left me very tired and unwell and in need of antibiotics (and I live in Southern England, hardly replete with deadly arachnids). I have also been buying stuff, but not really painting any of it. So as a consequence I have'nt really updated my blog in the last four (yes four!) weeks, which is quite terrible.

However I have been part-focusing on three things:

First are the Snakemen. I want to finish these critters off as they are wonderful miniatures and deserve the time and attention. I also bought yet another one, making a total of 45, to convert into an army standard bearer. I also purchased some Dark Fable Miniatures to complement them but more of that once they are painted.

Secondly, I have been pursuing my interest of Ancient Egypt, ancient civilsations, and the Undead,  by revisiting my old Tomb Kings, and looking into an Age of Sigmar 'Death' army. With the coming of the Age of Sigmar the Tomb Kings have been removed from sale and reduced to a niche aspect. However they can be still be used, with no need for re-basing, and so I have been buying a few more odds and ends, mainly Tomb Guards. The main advantages of Age of Sigmar Tomb Kings is the lack of reliance on a Hierophant, and no limitiations on army list restrictions.

I like Age of Sigmar, and I liked the idea of having an actual Age of Sigmar Army rather than just the Tomb Kings. I have some Ogres, but I am not really that fussed with them. So I turned to Death. The Death army is very similar to the Tomb Kings in many respects, with the Skeletons et al. So I have been intermittently collecting current Death miniatures to create an army with a Tomb Kings twist. This involves basically taking the Death miniatures and adding Tomb Kings parts, such as Tomb Kings shields, banners, and arms to Skeletons and Black Riders, and other items to a Zombie Dragon. As an extra addition I plan to use an old metal Tomb King's King as a Wight King.

Thirdly, I have looked again at the 40k Squats. I like the Squats but have felt my past efforts with them have'nt quite done them justice. So the plan is to paint strip them all and start again, something easier to do now I have discovered that Dettol strips plastic. I will also slightly break my own rule with some of my old armies in that everything should be as it was at the time, by re-basing some of the bikes on modern bases, and adding a few more contemporary items.

The plan with the Squats has been to break them down into their component types. By that I mean have formed seperate forces of original 40k metal Squats the 1987/8 metal Squats designed by the Perry's, the RT301 and RT302 ranges; the Bob Olley Squat range; the 1989 plastic and plastic armed range; and finally a Guild Expeditionary force. For the most part I have done this, and plan to paint each of the forces with their own, or mix of their own, paint schemes. I will also have enough spare for a small force of Chaos Squats, something I have wanted to do since 1989.
Someday I would like to assemble a 'Squat' army consisting of Hasslefree Grymn and Tau hardwear, all painted in Tau colours, but that will have to wait a while.

On a releated topic from the Tomb Kings I bought and am reading a history of Ancient Egypt, 'The Rise and Fall of Ancient Egypt, by Toby Wilkinson. This inspired me to go shopping for something in an Ancient Eygptian vein. With that in mind I ended up buying (with provenance) an actual Ancient Egyptian Scarab from an antiquites dealer in Mayfair. It's made from from Blue Frit. It is dated from the 18th to 19th Dynasty, approximately 1570-1185 B.C.
I just thought I would include it on my blog as something of interest as I really like it, and it feels strange to own something over 3,000 years old. 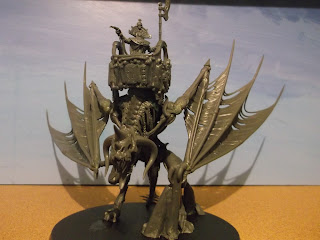 Vampire on Zombie Dragon.
I have removed the saddle from the Dragon's back, and added the howdah from the Tomb Kings War Sphinx. For the Vampire Lord I am going to use a spare plastic Tomb King, although I will add a more Vampire looking head. 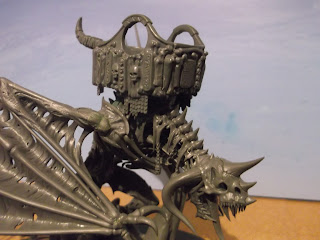 Close up of the howdah. 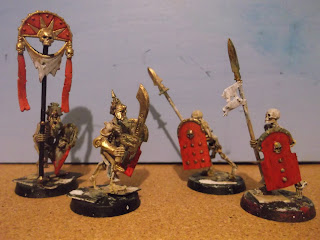 A few of the Skeleton Warriors.
All I have done is rebased them onto 25mm round bases, and added Tomb King shields, a sword, and banner. I have about 60 of these to assemble and paint. 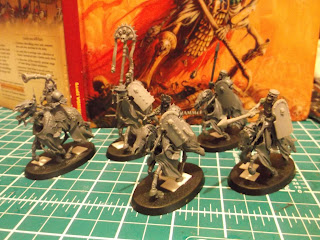 Black Knights.
Like the Skeletons I've added some Tomb King parts, and also a few head swaps as well. I plan to have a couple of units of these as an hard hitting mobile alternative to the Chariots which the Death army does not possess. I see them as a slight homage to ancient cavalry, such as Assyrians or Sarmations, but with a Tomb Kings slant. 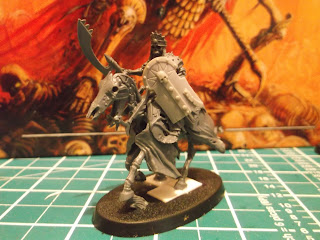 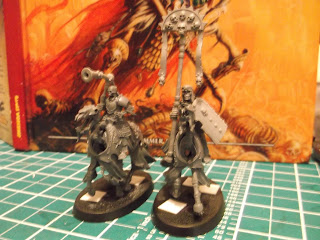 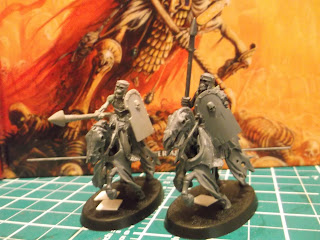 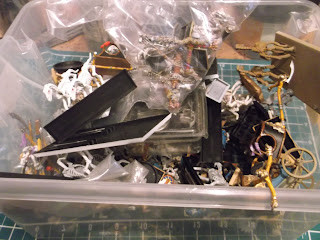 Box of Tomb King bit to be sorted out! 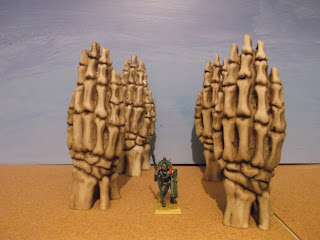 I also picked up some Halloween ornaments of giant Skeletal hands for the Tomb Kings. They were only about £4 each, and there seem to be lots on e-bay, so I might get some more. 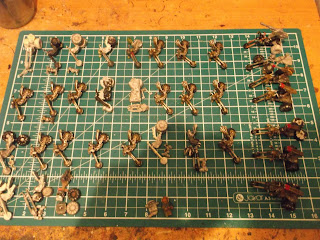 Squat bikes in need of paint stripping.
I also have another five for the Exo-Armoured Squats. 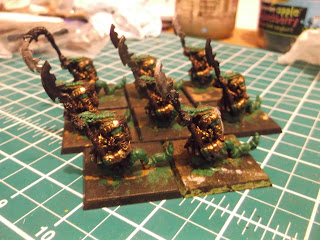 Snakemen, which I need to finish! 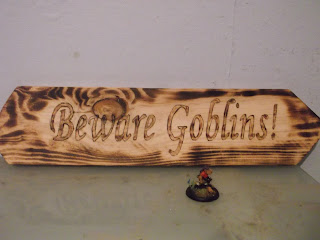 Beware Goblins!!
A friend of mine had this made for me a little while ago, but I kept forgetting to photograph it.
Goblin shown for scale, and mischief purposes, only. ;) 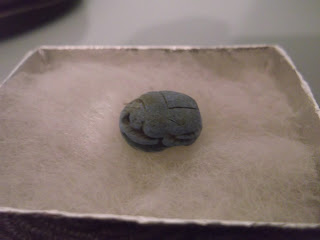 Blue Scarab.
It is 13.6mm x 9.74mm x 6.49mm and made of Blue Frit.
I absolutely love this, the detail is great and it is really charming.
The Scarab has a hole drilled through it (in antiquity), so it could be worn as a pendant. 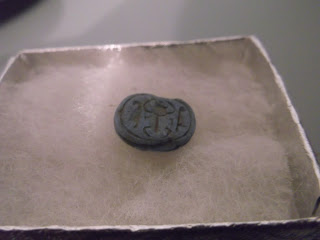 The underside, showing a Scarab flanked by a pair of Maat feathers. 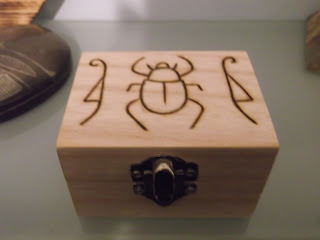 To keep it in I had a custom made box made from a box seller in Brighton, taken from the underside decoration of the Scarab.


Next week, I not only intend to update the blog, but also to have painted some Snakemen too!! :)
Posted by Goblin Lee at 21:59 2 comments: