It is a bit of a late post this week as I have had a very busy week and weekend.  I have also not made much progress with painting the Skaven, but fortunately they don't take very long to paint, although I want to finally get them finished soon they are taking long than planned (mainly becuase I have'nt been painting them!).

Anyway, the 5,000 point Slann army is all painted and ready for the game at the end of this week. The actual amry list can be found on a previous blog update here: http://goblinlee.blogspot.co.uk/2014/08/all-projects-on-hold-for-return-of.html

I am happy with the army compostion, although I would have liked to add Pygmies, and maybe some Troglodytes and Cold One Riders. The overall look of the army is a lot brigher than I thought it would be, and is going to look a colourful sight on the gaming table, and I think I have picked a good mix of coloured regiments, with a mix of blues, greens, yellow, orange, and mottled.

The battle is next weekend, and will be over two days (unless something goes really wrong with panic tests on either side! ). I intend taking lots of photographs and writing up a turn by turn report on the battle, but this might require a little time to write up, so the next blog update will be after the weekend. Justin and I are working on a back story for the battle as well.

Other than that mixed news concerning wargames/model shops in the South of England. Onslaught Games in Hove has closed, due to personal reasons of the owner. However in Portsmouth a new shop called Fistful of Dice has been opened up by someone I knew from  Portsmouth University. They don't as yet have a website, but it will be coming soon I have been told.

Here is the Slann army, ready for battle.
Enjoy :) 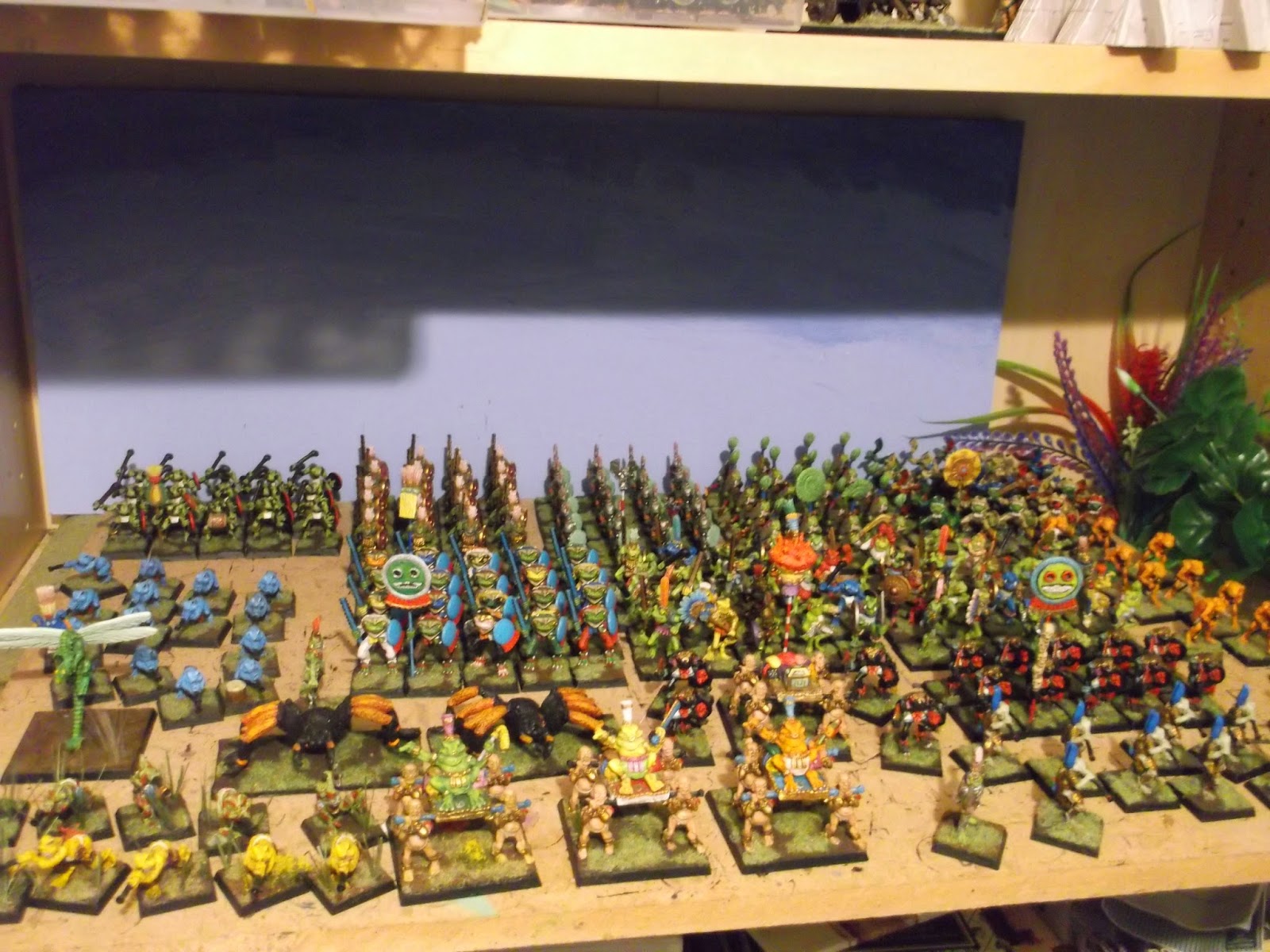 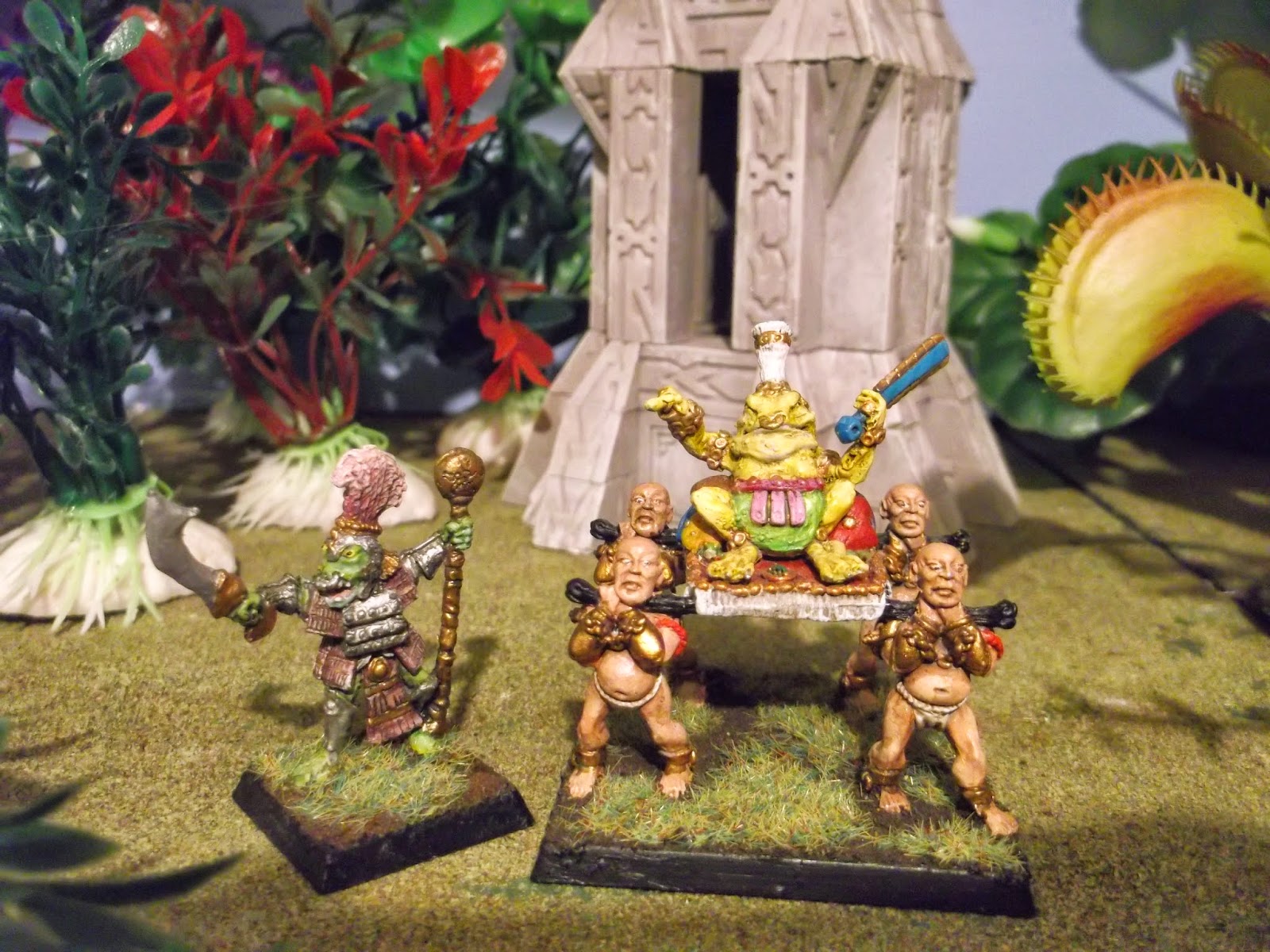 Gurggle Greenwake, Army General, escorting Level 20 Wizard.
Before the weekend I am going tothink up of names for the Wizards, in true poor punning 1980's style! :) 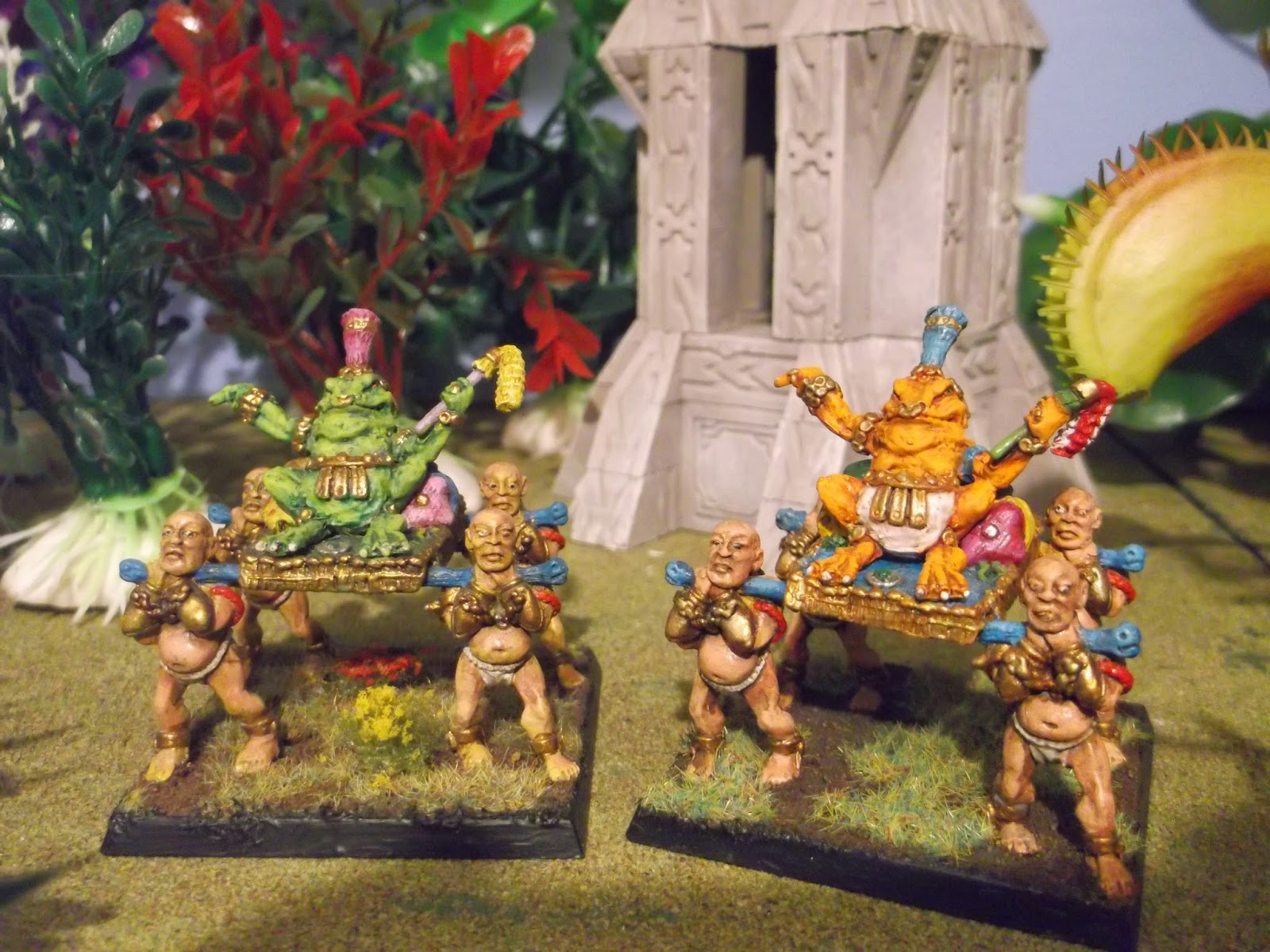 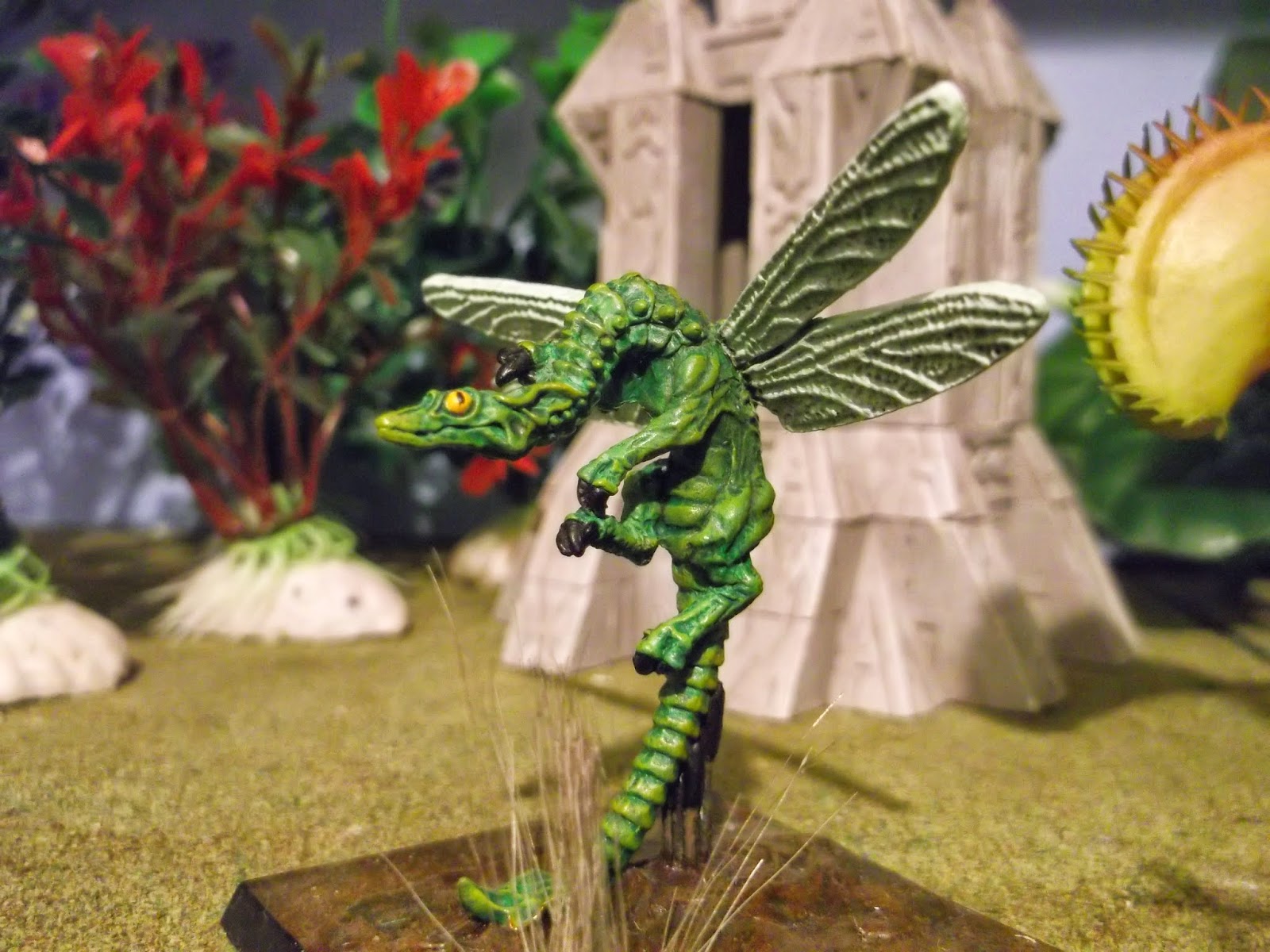 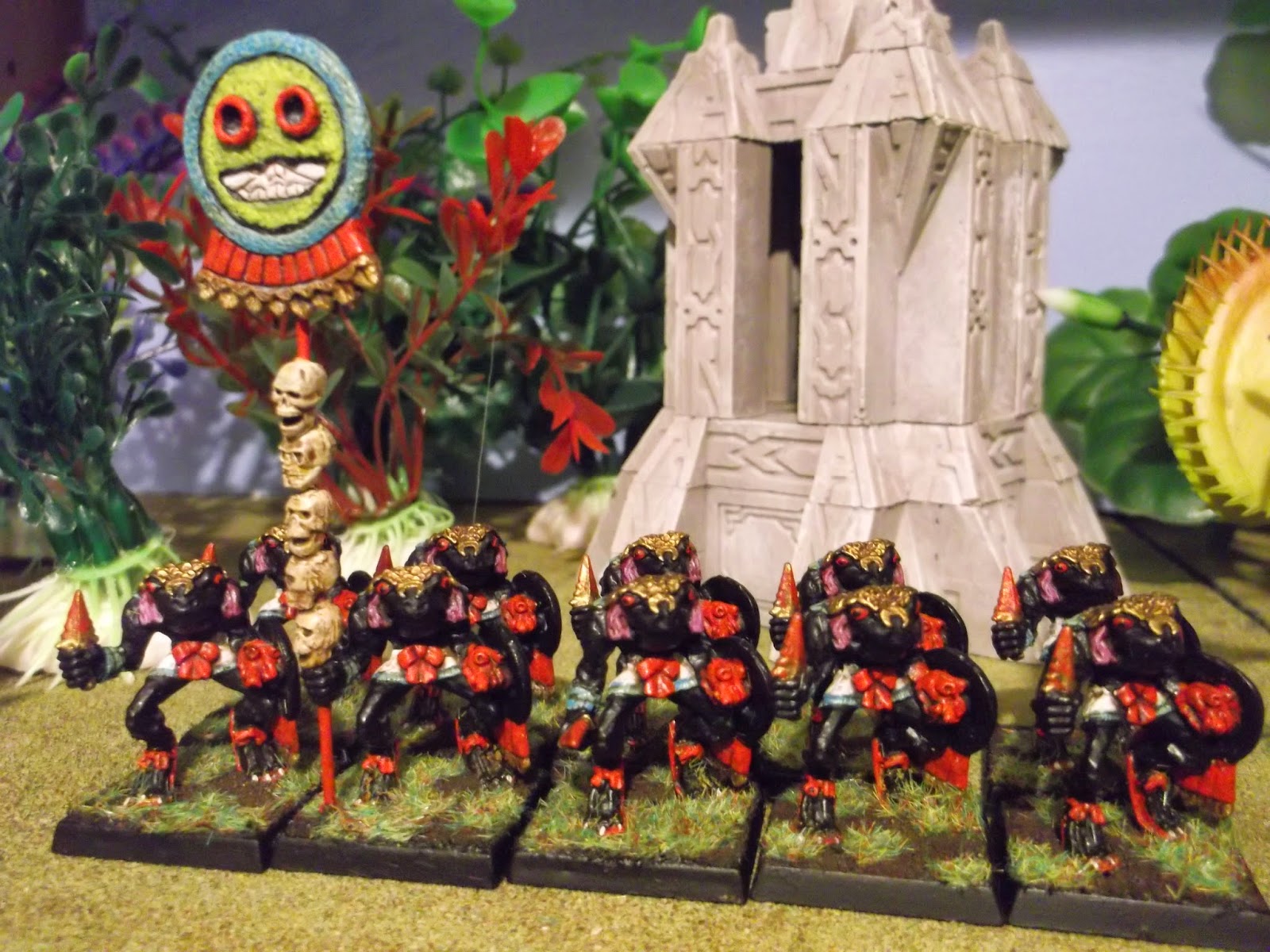 10 Warrior Priests, +4 Shock Elites, with Bane Banner.
I re-painted the Bane Banner green as I was not happy with it. 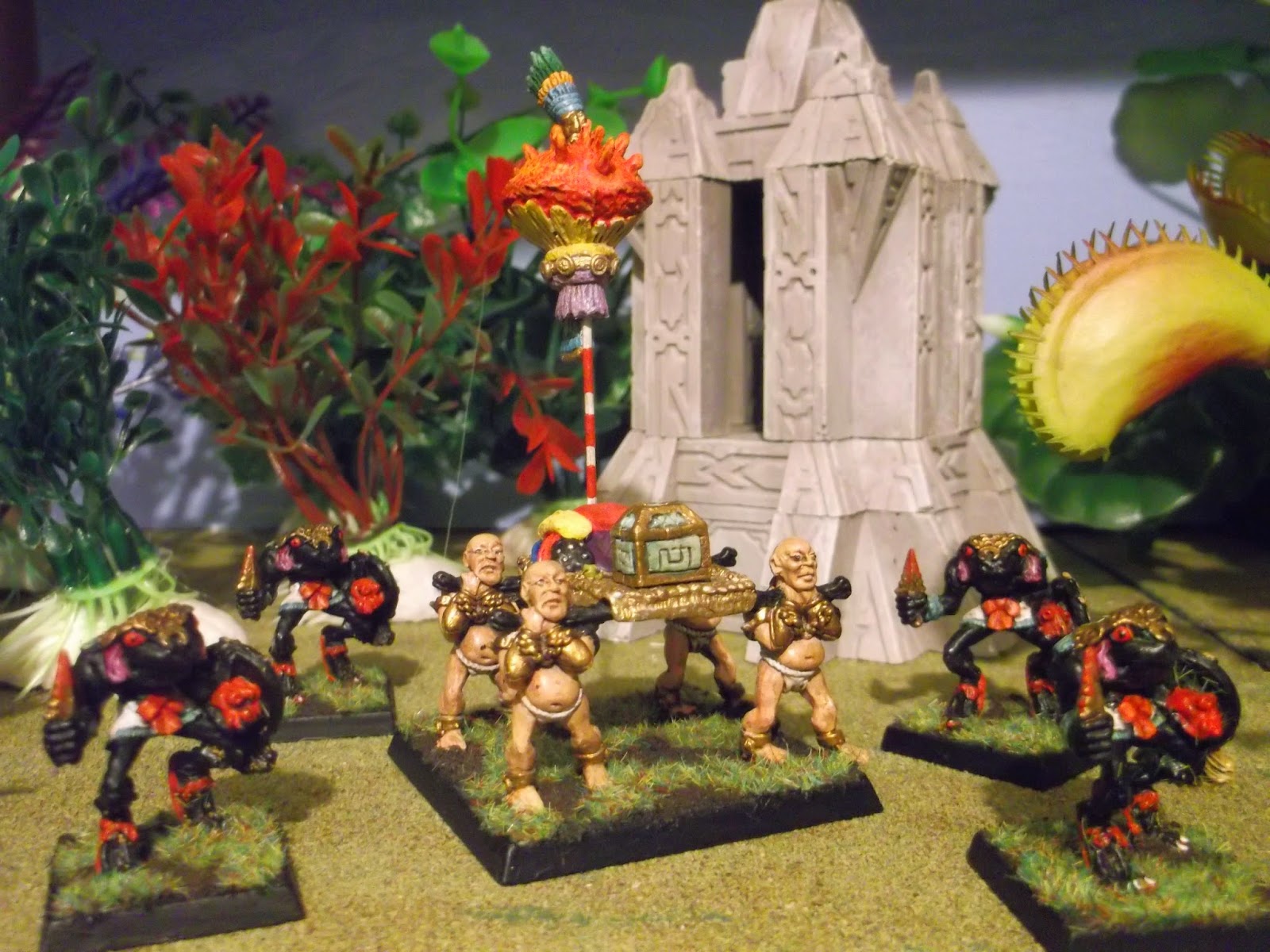 War Altar on a litter with Warrior Priest Guards. 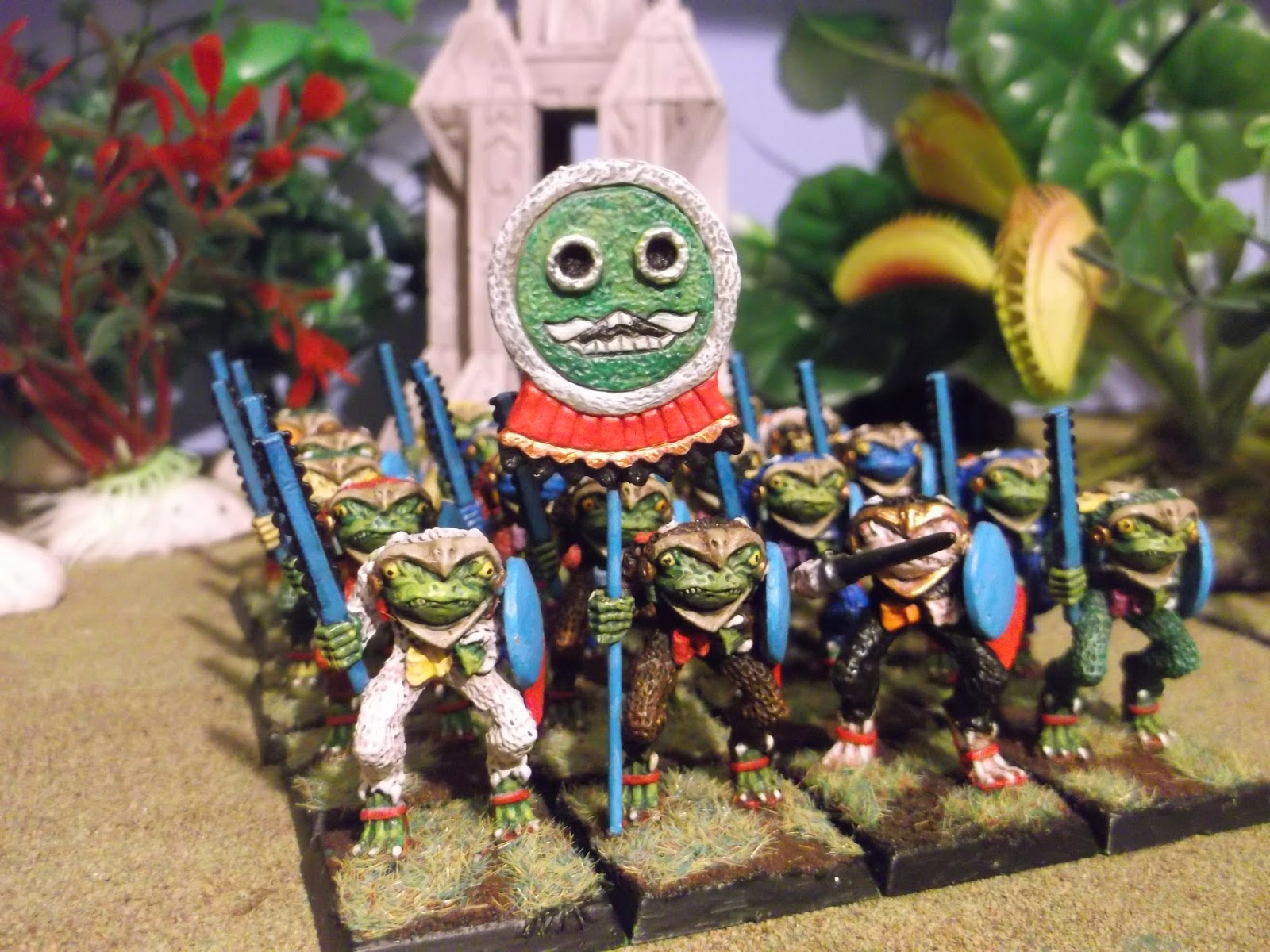 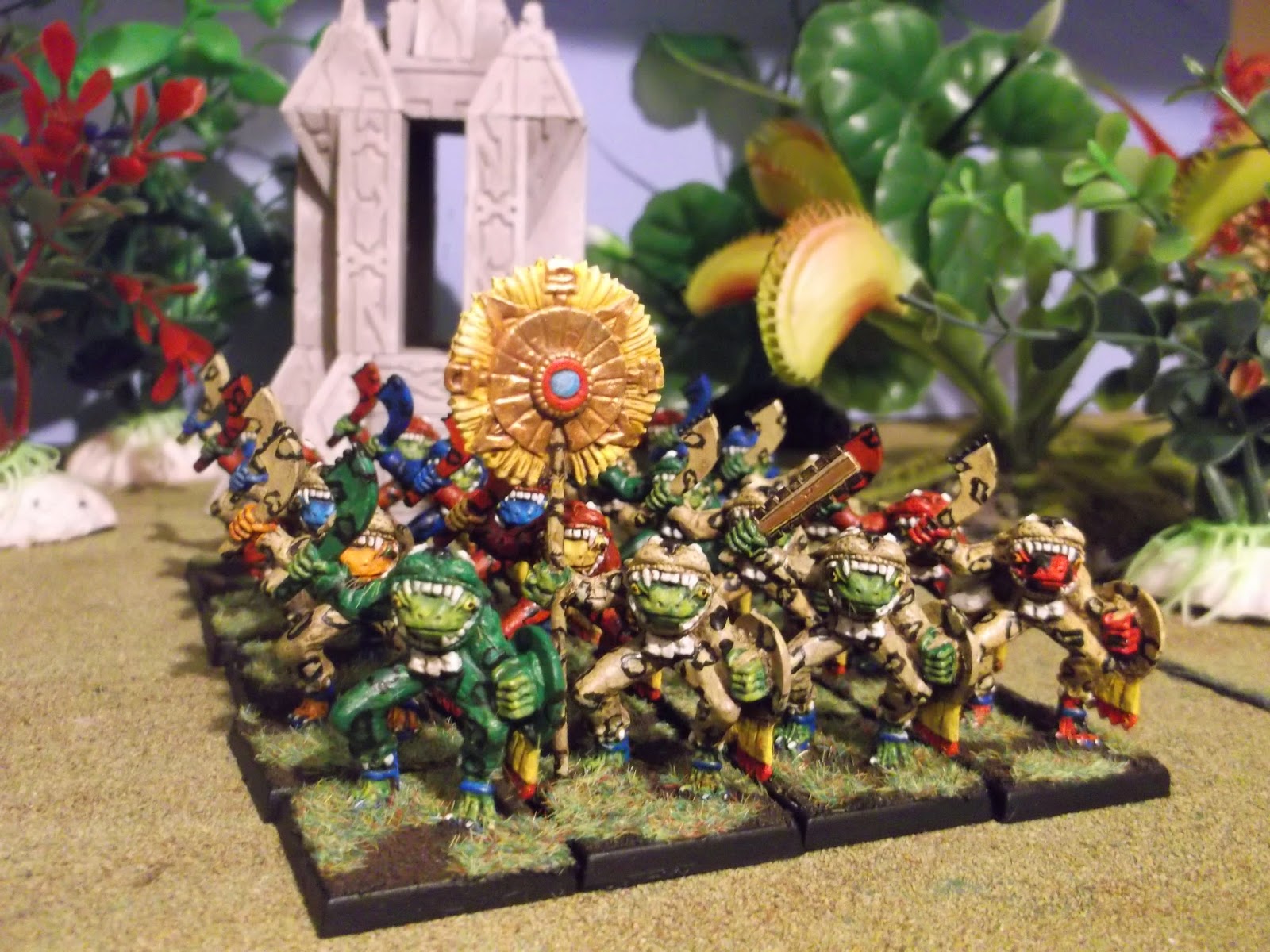 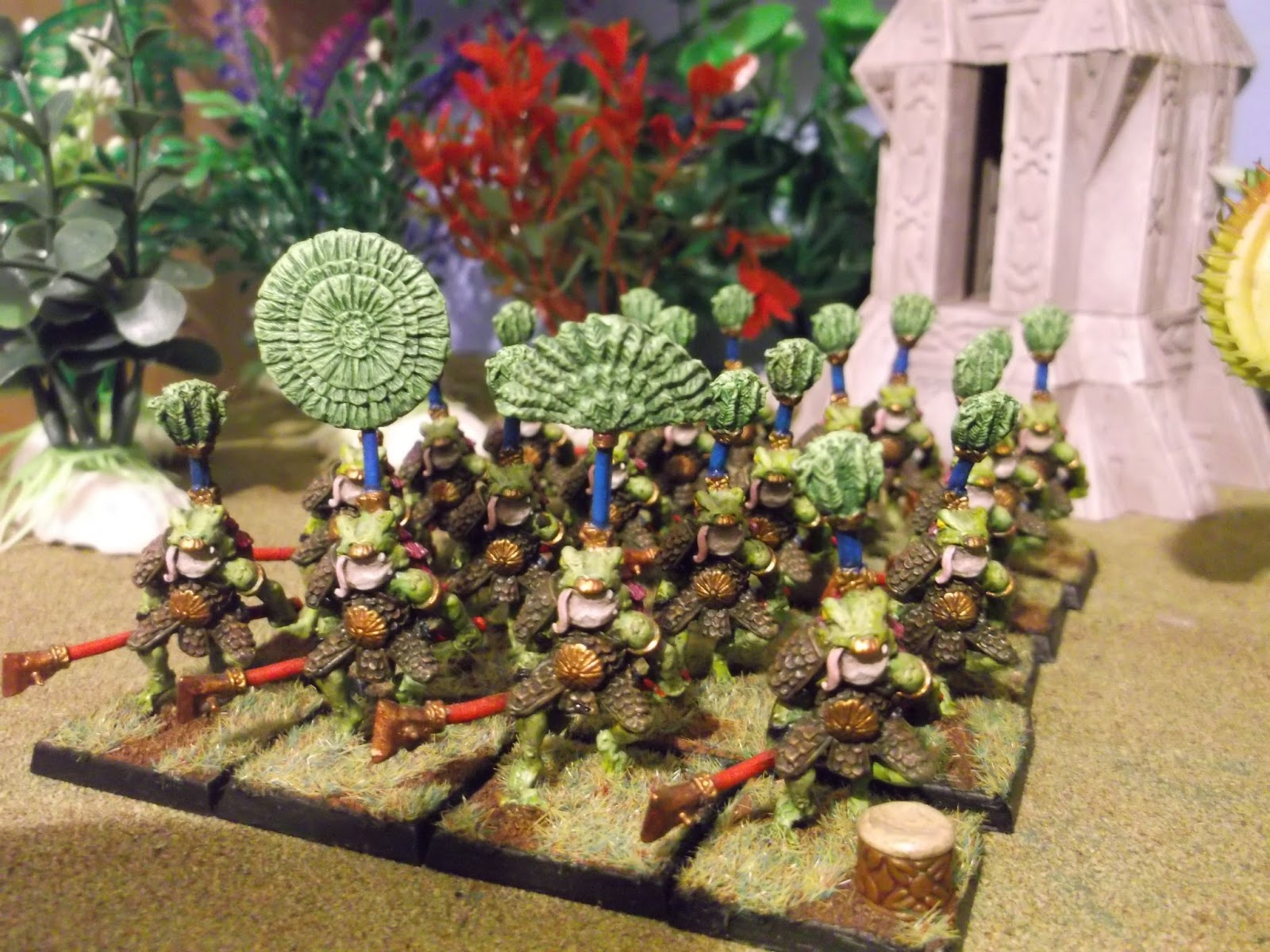 20 Aligator Warriors, +1 Shock Elites in Heavy Aligator skin armour.
The regiment is made up of the C32 Slann model 'Pintamilkada' 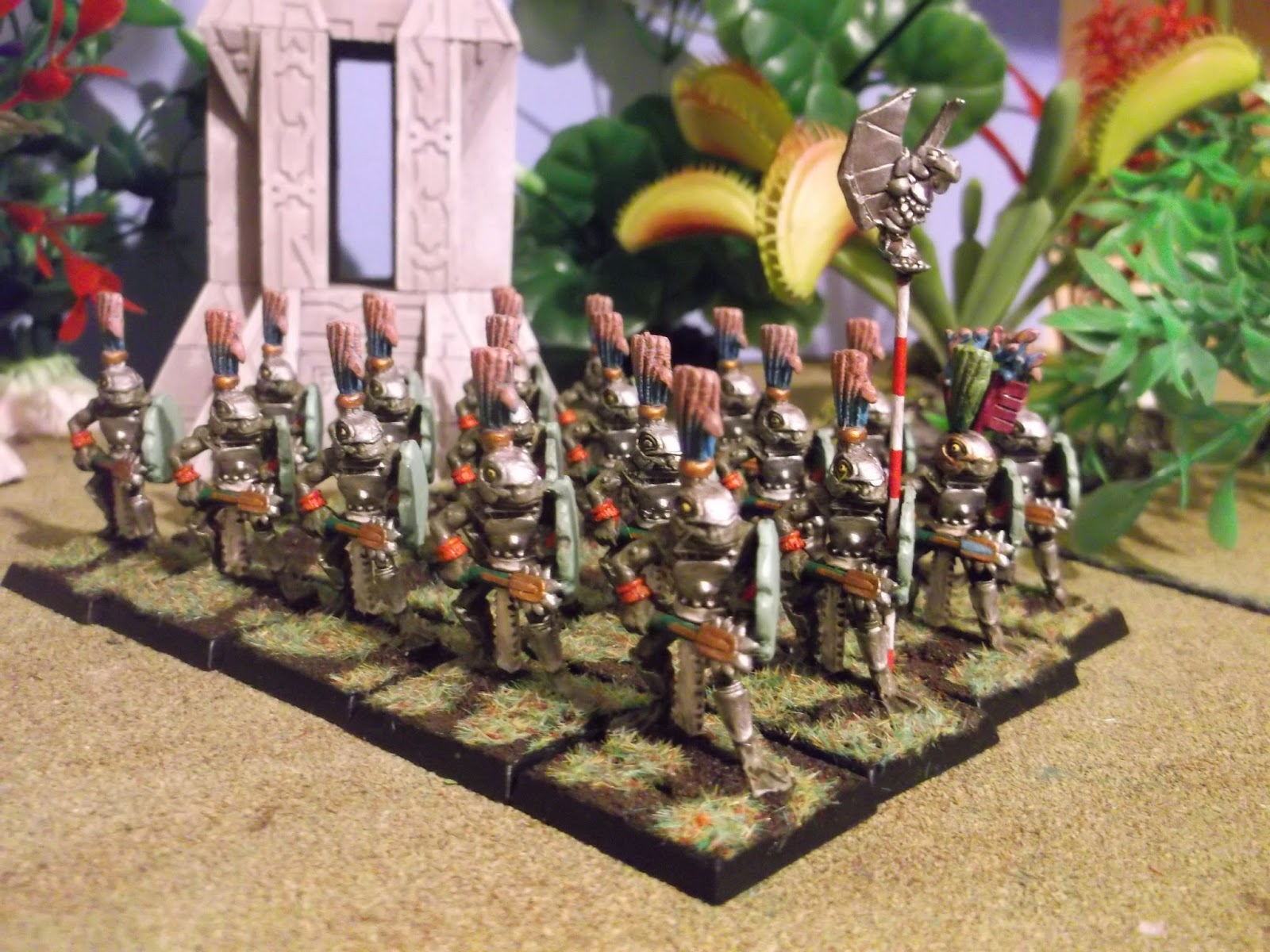 Bull Slann regiment, +1 Shock Elite Slann garrison soldiers.
They are made up from the solid based C32 Slann 'Palace Guard Officer'.
I have painted them up slightly different to other Slann giving them new-fangled steel armour and edged weapons. 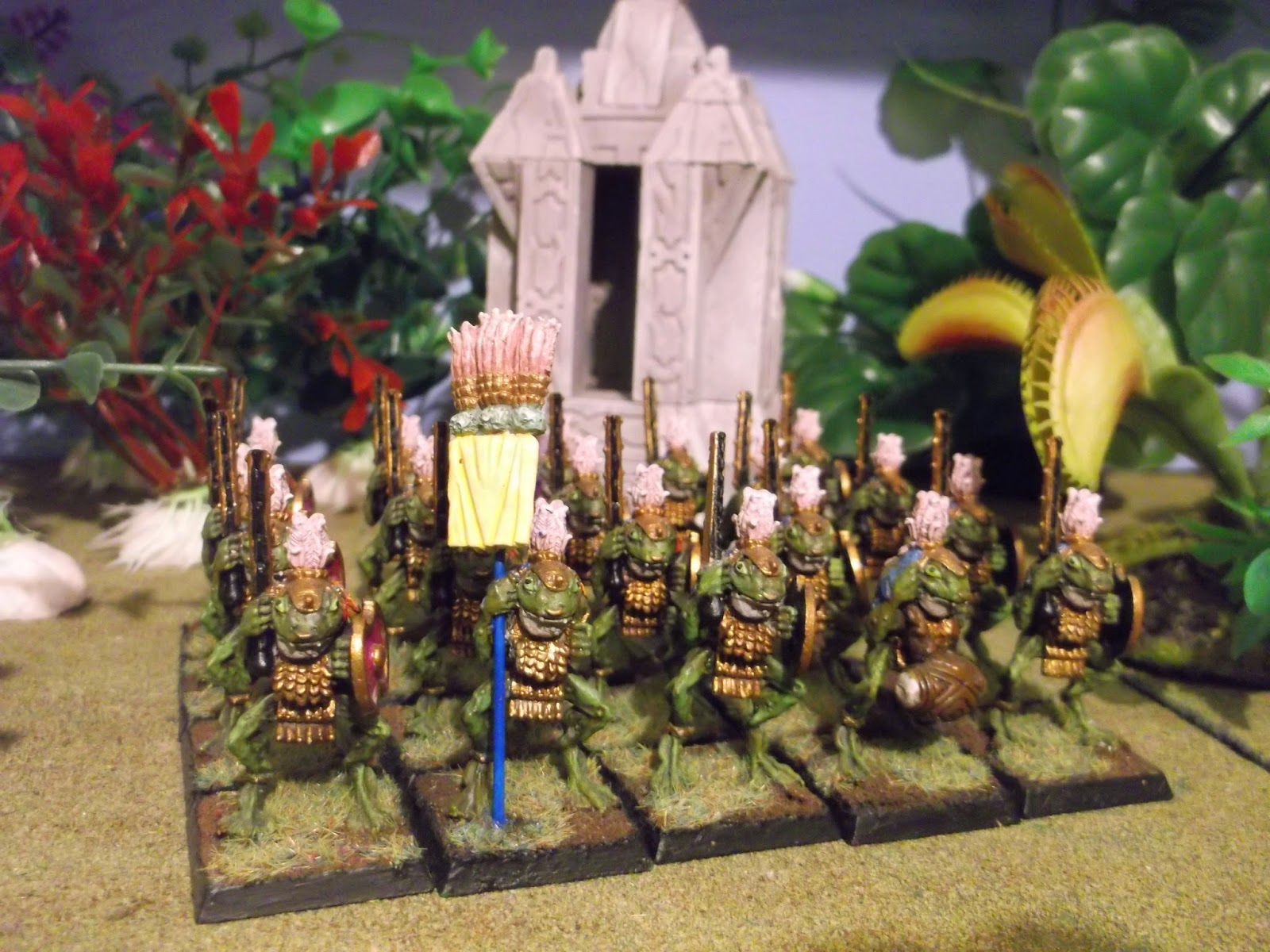 Another 20 Bull Slann +1 Shock Elite.
Made up from C32 Slann model 'Ethelalco'ol'. 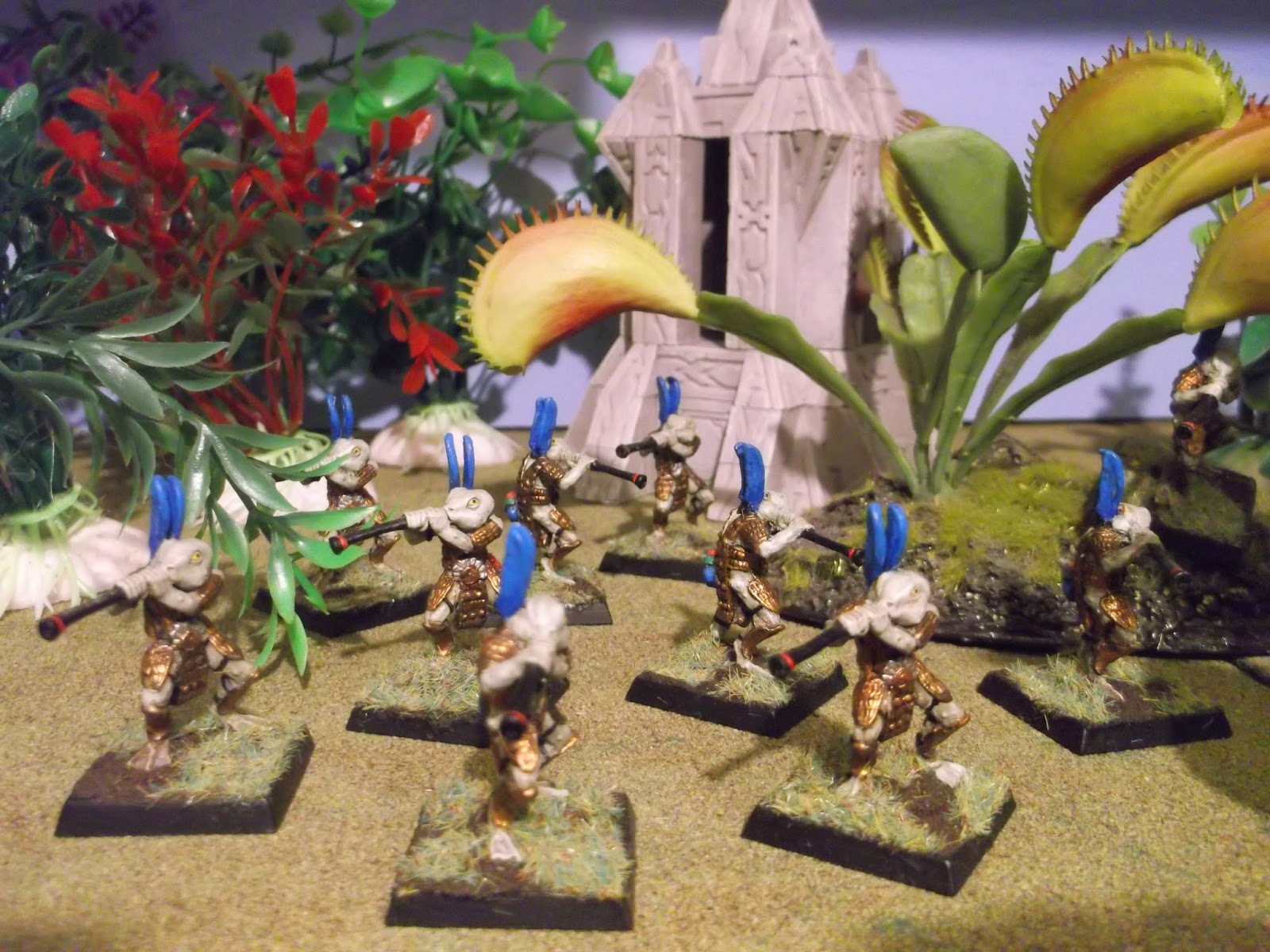 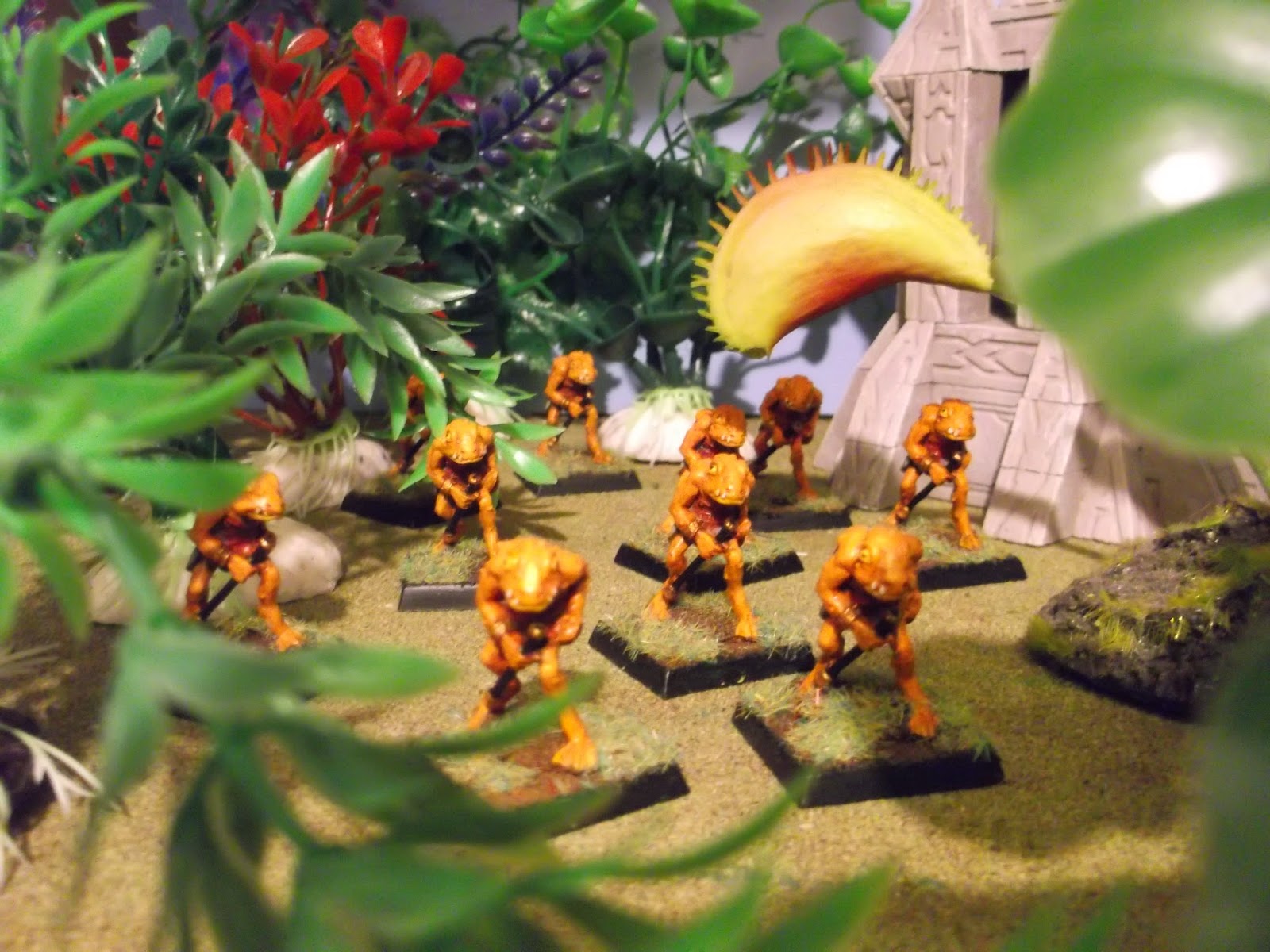 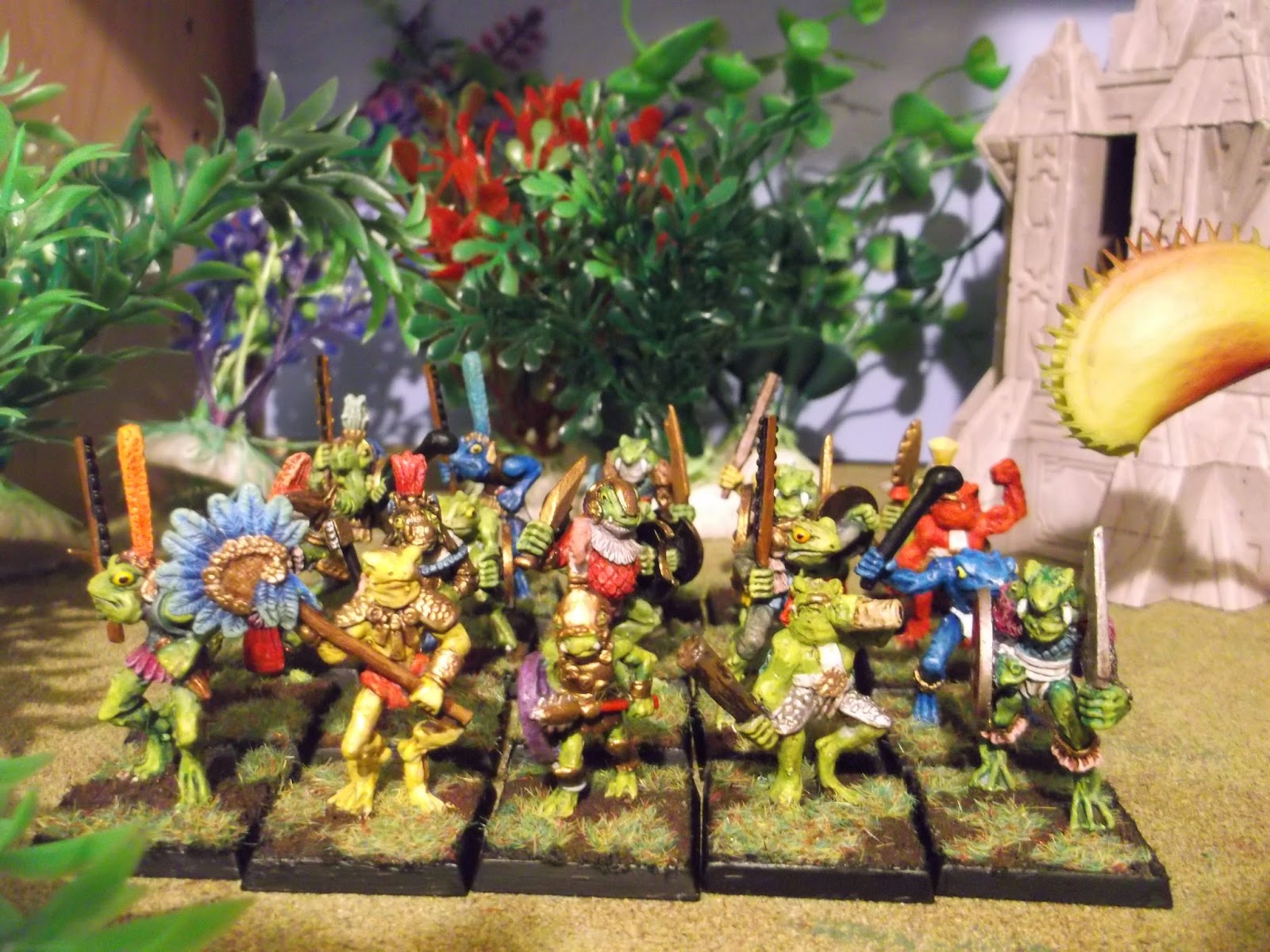 20 Spawn Band, normal profiled Slann warriors made up from a selection of C32 models. 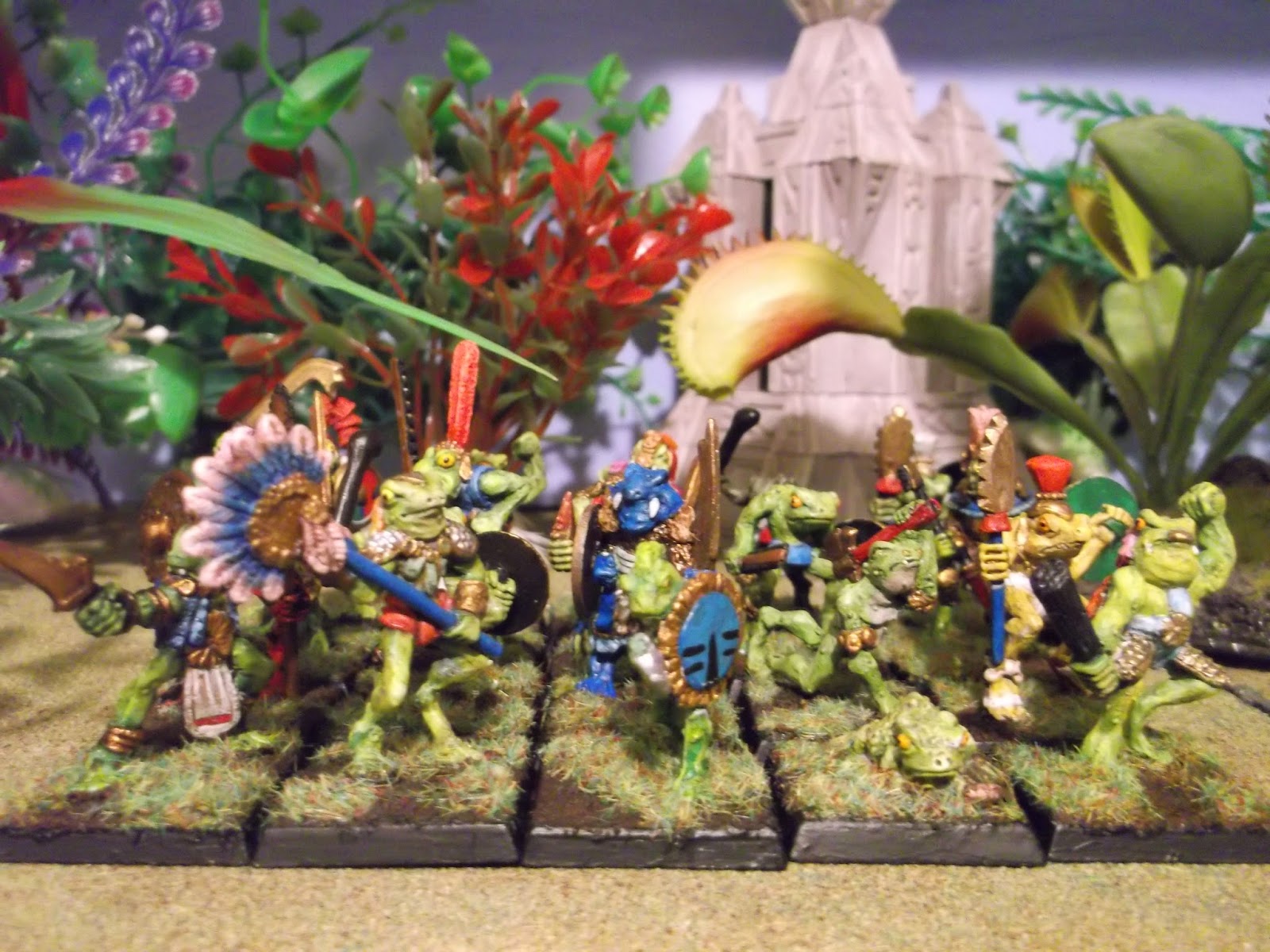 The second regiment 20 Spawn Band, normal profiled Slann warriors made up from a selection of C32 models. 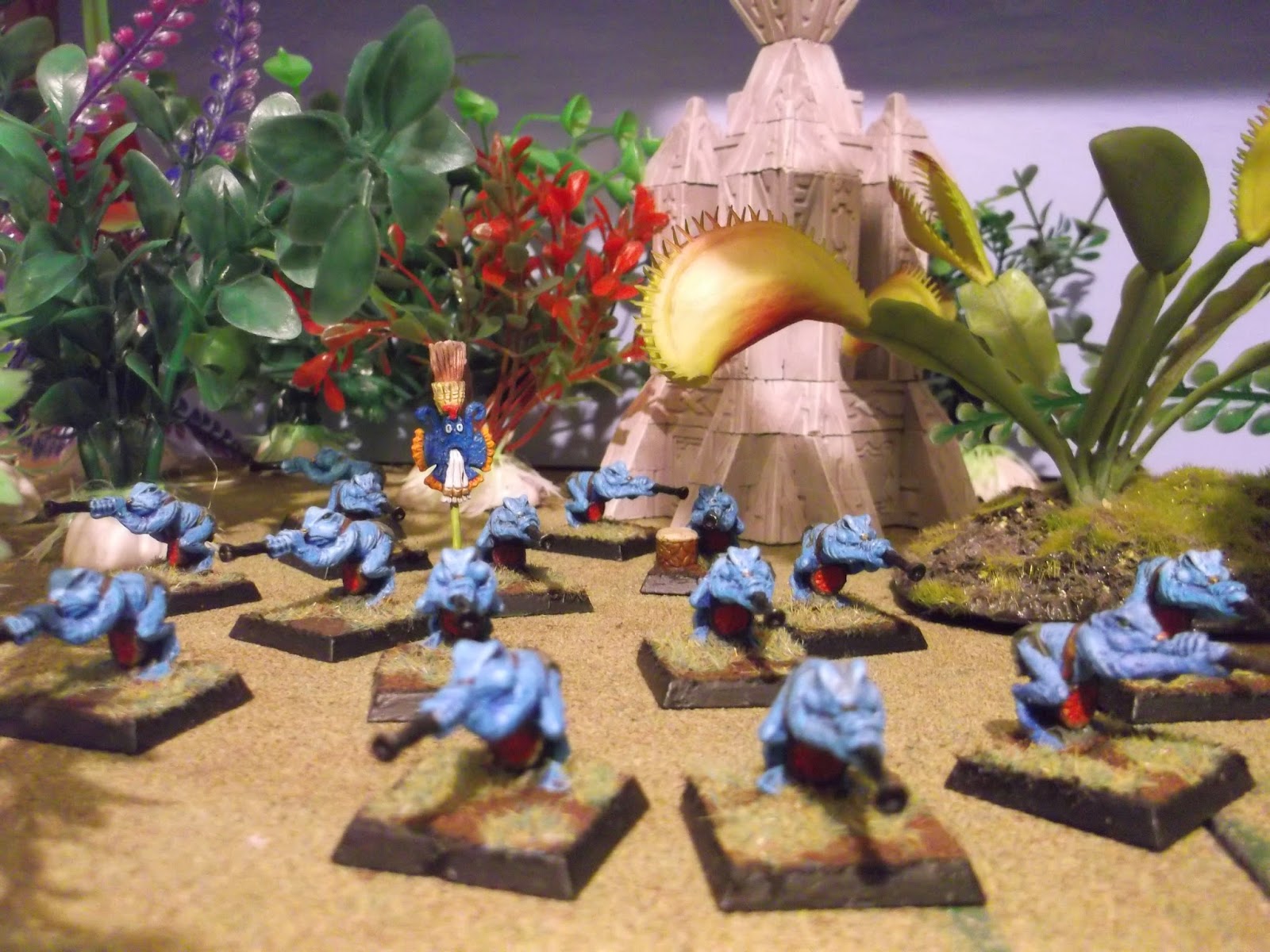 15 Jungle Braves.
Slann levy, made made up from the C32 Slann blowpiper model 'Akabylk'. 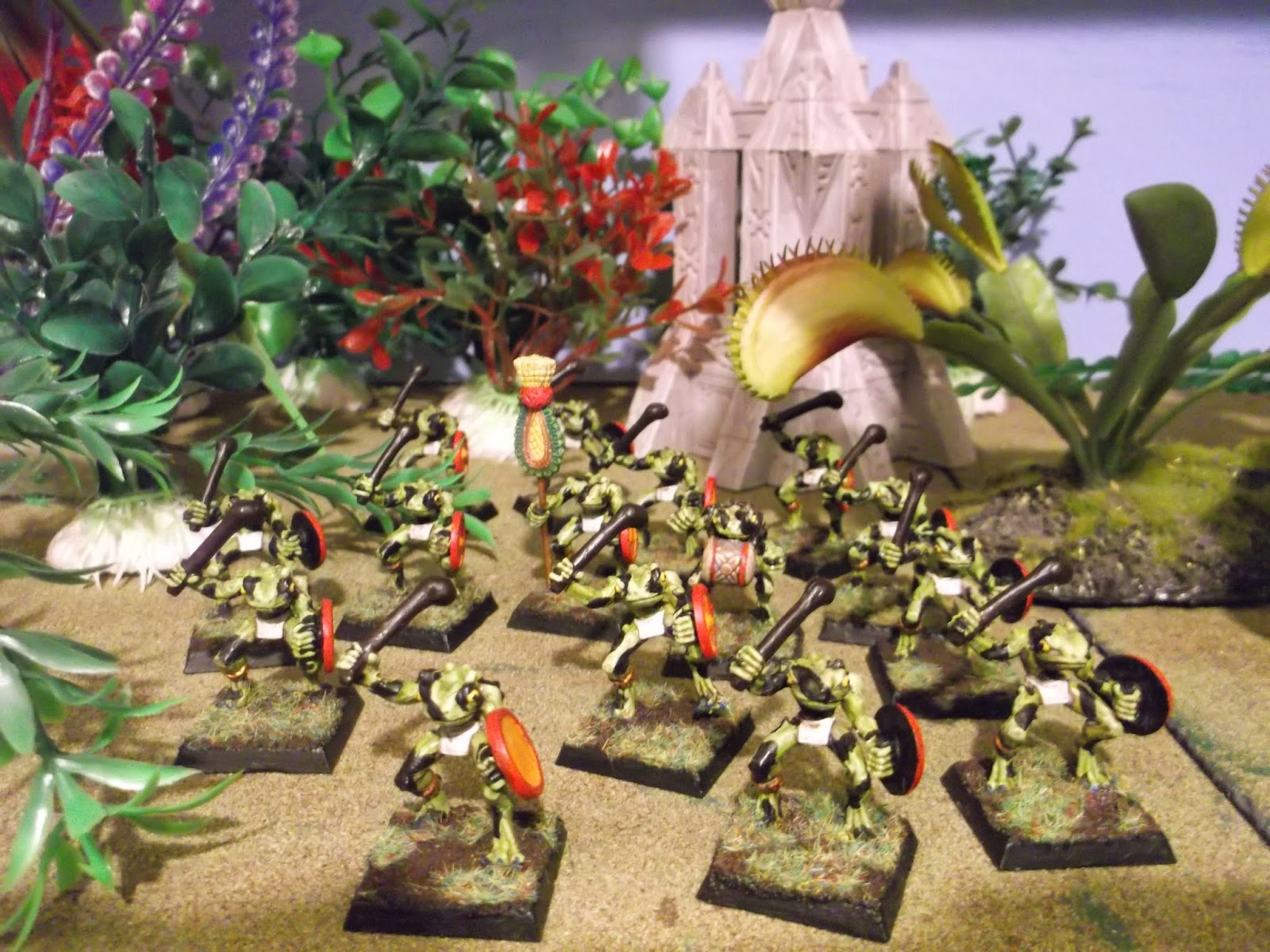 15 more Jungle Brave levy, armed with hand weapon, shield, and darts. The regiment is made up from the C32 Slann 'Naxlatl', and I have re-postiooned the arms and legs of many of them to avoid a 'cookie cutter' look of bland uniformity. 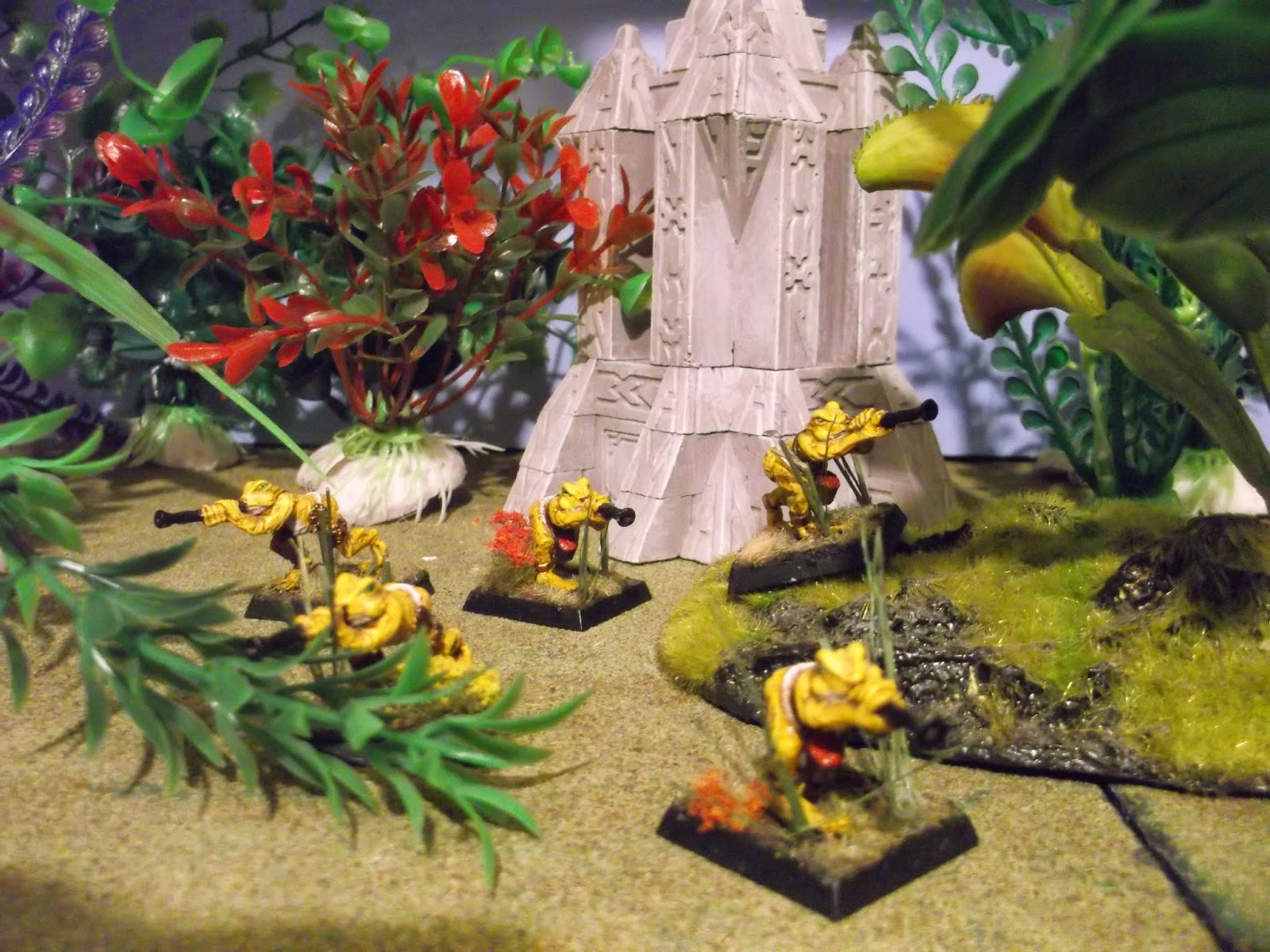 5 Slann Scout, er, scouting.
The model is C32 Slann model, but is unlisted.
I think it is quite appropriate to have the more independent minded Slann represnted by a 'Slann with no name'. :) 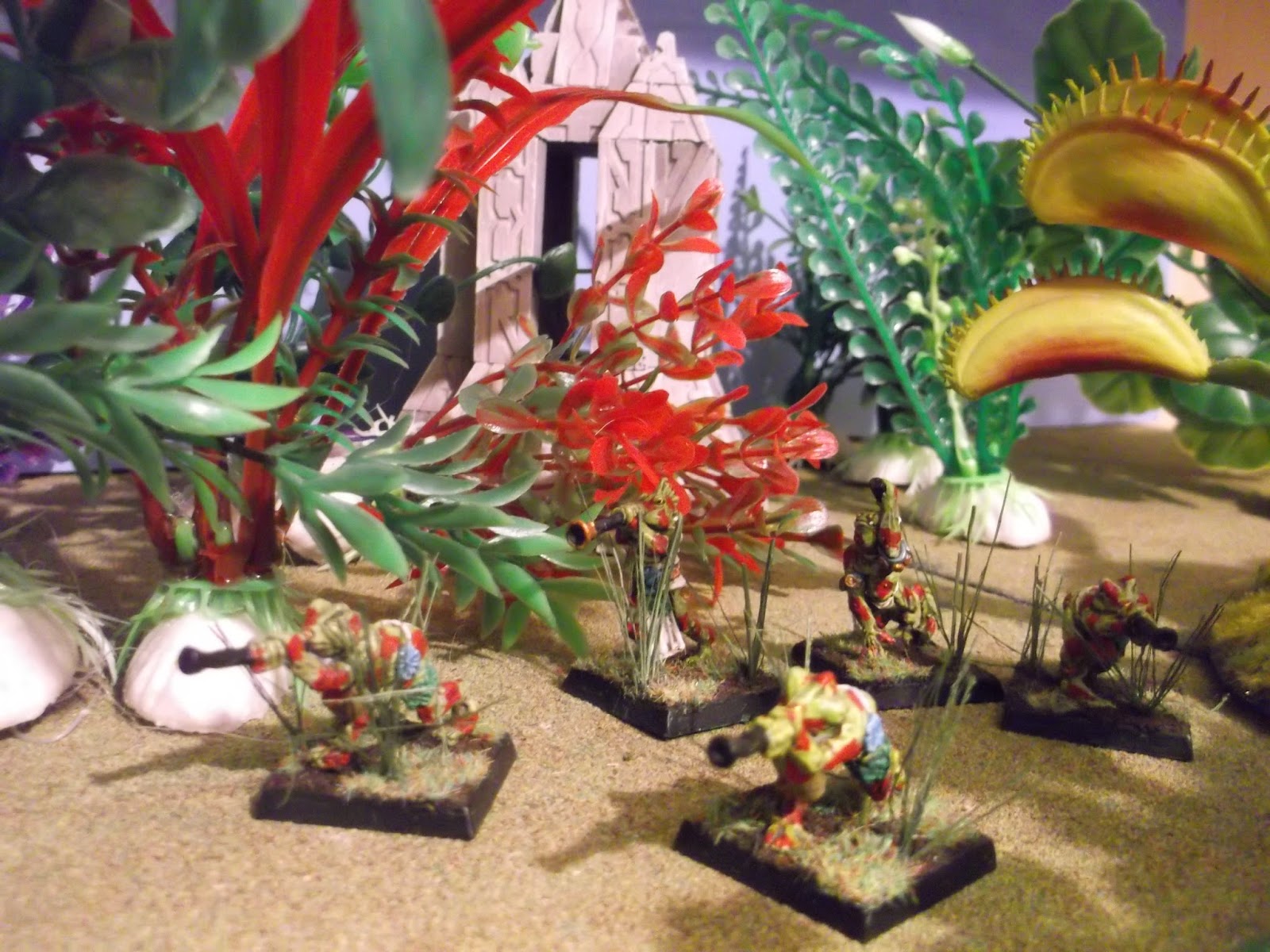 5 more Socuts, blending in to the jungle.
They are a mix of models, the leader being the Slann Lieutenant Blowpipe (sometime listed, wrongly, as a Musician), one ofthe models being the C32 Slann 'Lep'nluni', and the other 3 unlisted Slann. 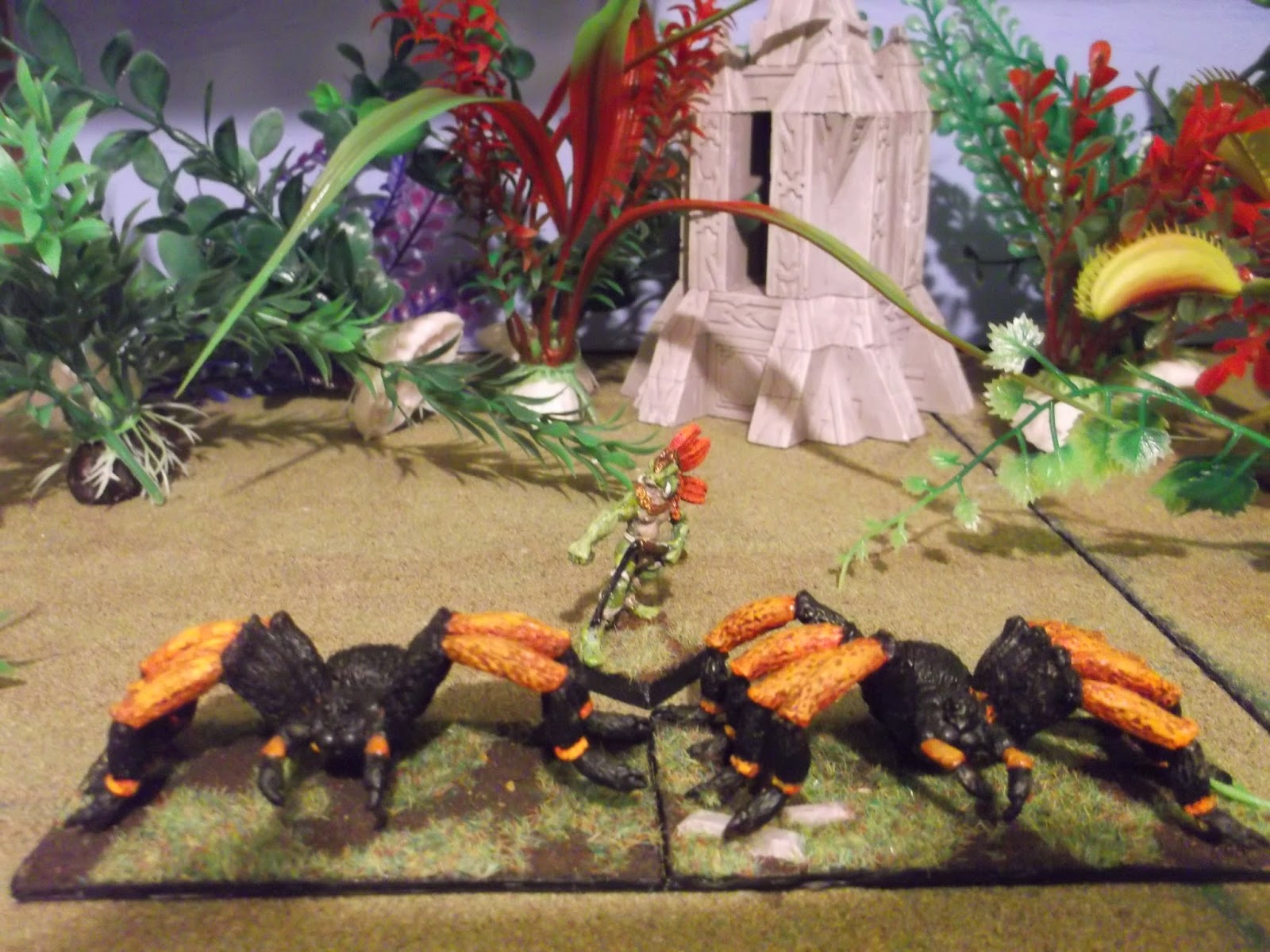 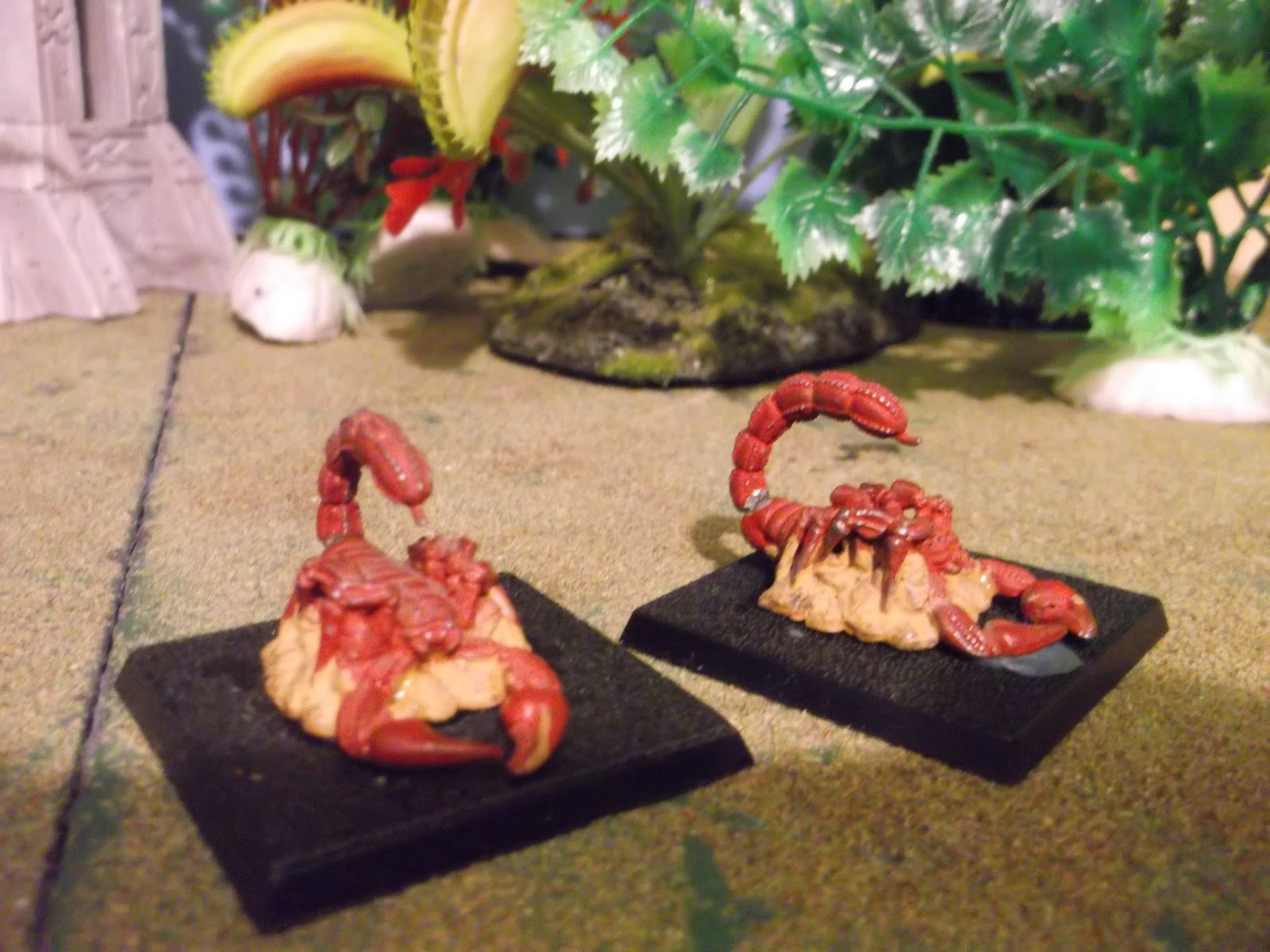 .... these arrived in the post today from e-bay.
They are a pair of old Grenadier Scorpions, and I might paint these up as soon as possible and swap them for the Giant Spiders as they are both 45 points.

As I mentioned earlier in the blog the next update will probably be after next weekend, with lots of battle news to report. :)
Posted by Goblin Lee at 23:42