Growing up in the UK in the 1970's and 1980's meant that there were always a lot of old World War Two films on TV. One of my favourites from the British 1950's era was Dunkirk, with John Mills as a British Corporal leading a squad of soldiers through Northern France to the coast, and being chased by the advancing Germans.

Now when Rogue Trader was released in 1987 with the Space Orks looking very Wehrmacht in their in Stahlhelms, it instantly fired my 13 year old imgination. It was'nt a short leap of my imgination for the relentless Wehrmacht to be transformed into Space Orks. This is why I painted Luggub's Drop Legion in a World War Two fashion here: http://goblinlee.blogspot.co.uk/2013/06/rogue-trader-orks-luggubs-drop-legion.html

However, apart from actual World War Two historical humans, I never found a suitable looking opponents for the Orks. The Imperial Army/Guard always looked too 1980's or American (good for Kelly's Heroes) so I never bothered. However a few years ago now Hasslefree Miniatures started to produce a small line of World War One Halflings, known as Kindred:
http://www.hfminis.co.uk/shop?category=miniatures~kindred-%28weird-war-halflings%29

So I thought when I get around to re-painting the Space Orks I will look at getting some of the Halflings. I finished the bulk of the Orks a couple of years ago, but never got around to starting the Kindred. With Orkober I decided to finish off the odds and ends of the Orks, and buy a few of the Kindred for the fun of it, which I purchased from Tritex Games as they had a few cheaper old stock from the initial release of some years ago ( http://www.tritex-games.co.uk/ ).

In line with the World War Two looking Orks, I painted my Halflings up in World War Two British colours, rather than World War One. The uniform cut with it's tunic rather than Battledress, although World War One, was similar to the early war uniform Battledress of 1937. And anyway, they are Halflings fighting Space Orks, so I was'nt too concerned with too much exact accuracy, as long as they looked about right.
I also bought a 1/72 scale Airfix kit of a 'Matlida II' tank to convert up and accompany them.

In other things, I am continuing to paint up the Space Ork Assault Grenadiers, with only seven left to paint, and then base and varnish them all. Then onto the Wartraks and the Sleazy Rider.
However, I have not started on basing the Skaven, but will soon.
I did paint up 8 Halflings, a Tank, and 14 Space Orks this week though. :) 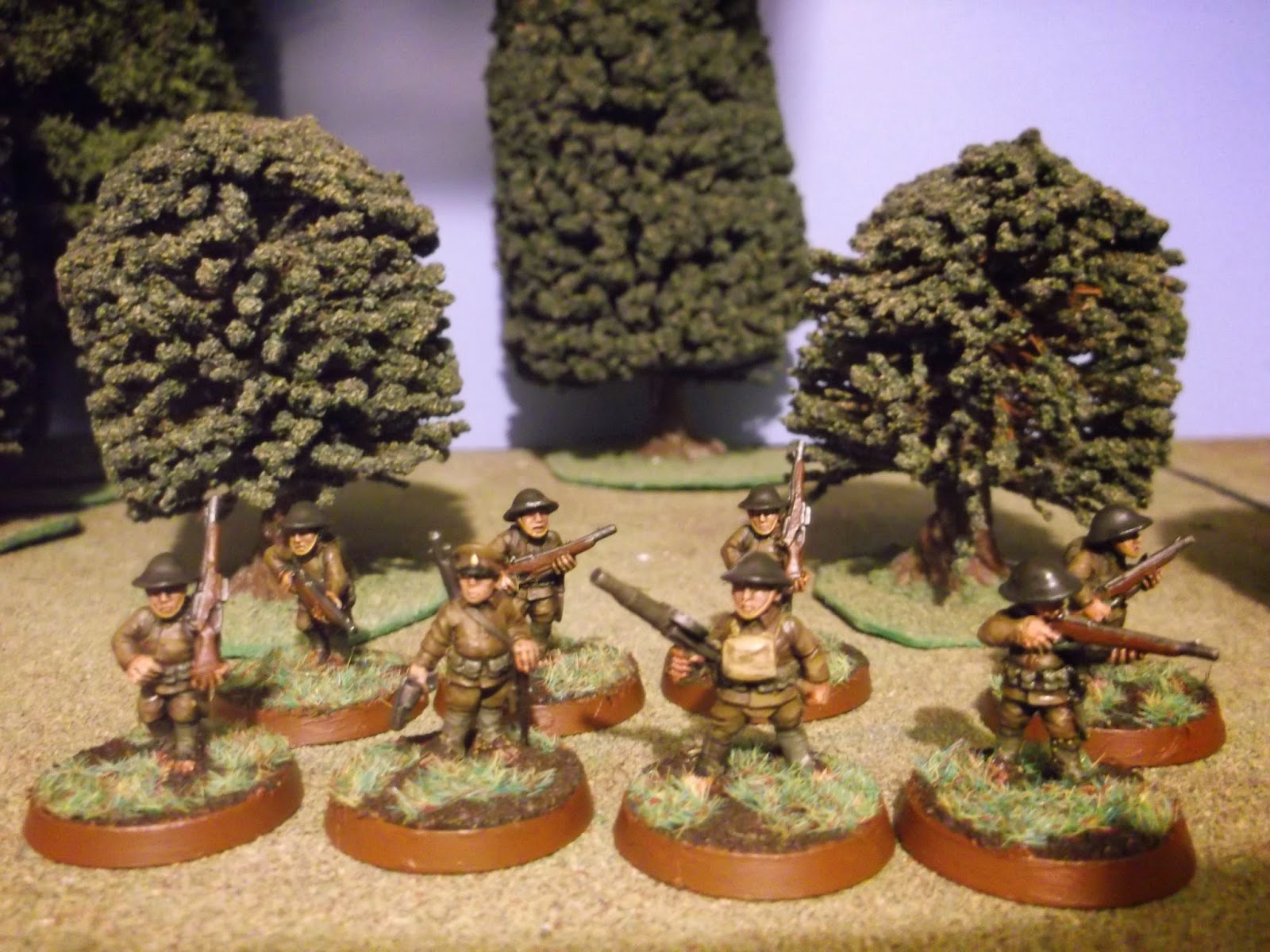 Eight Hasslefree Miniatures Kindred/Halflings.
Painted using Vallejo World War Two English Uniform (unsupringly) for the uniforms. I used Vallejo Violet Brown (which is a Green!) for the equipment, and mixed a little with black for the helmets.
I am pleased with how they look, but they are really tiny, even for Halflings. 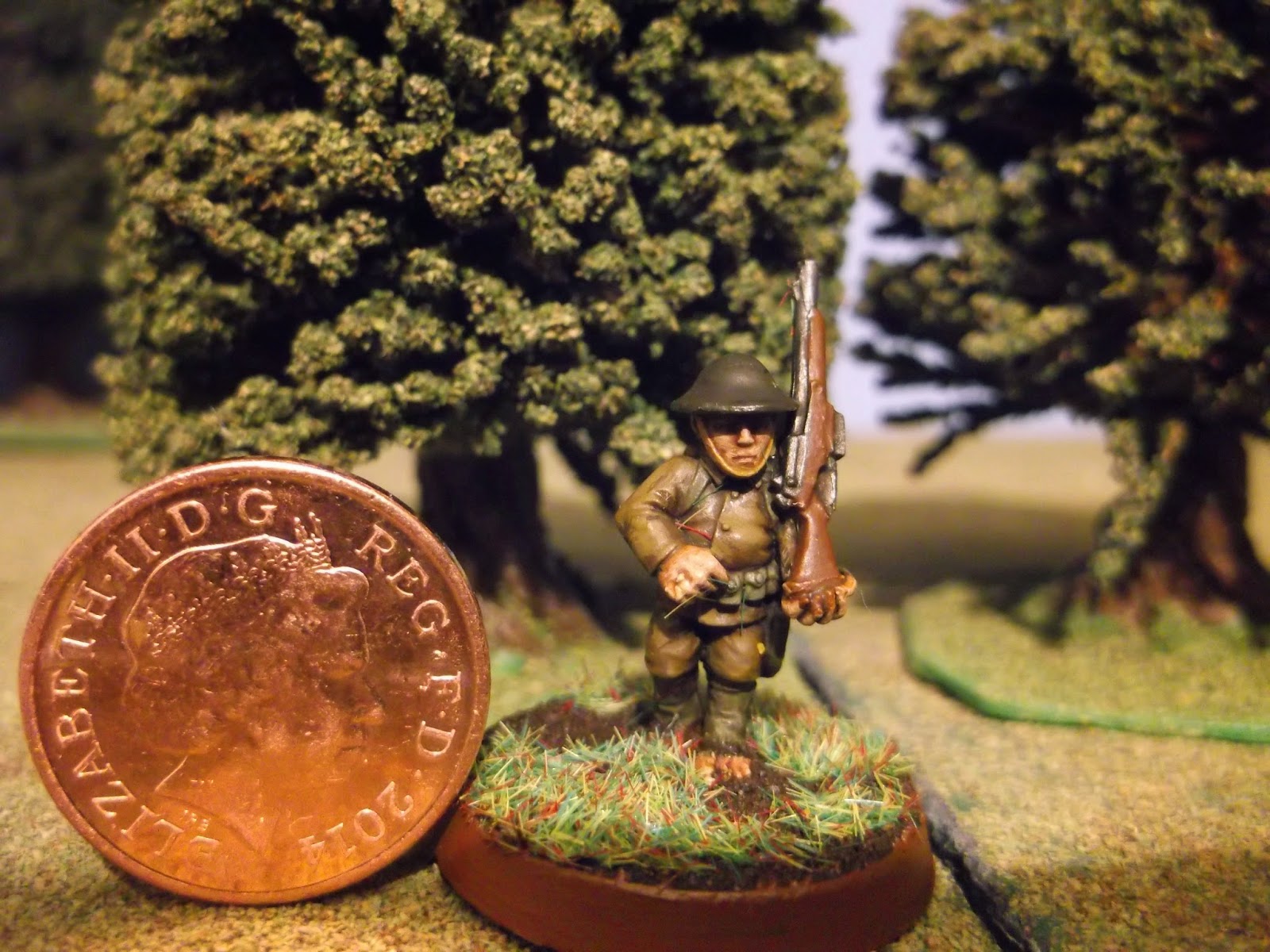 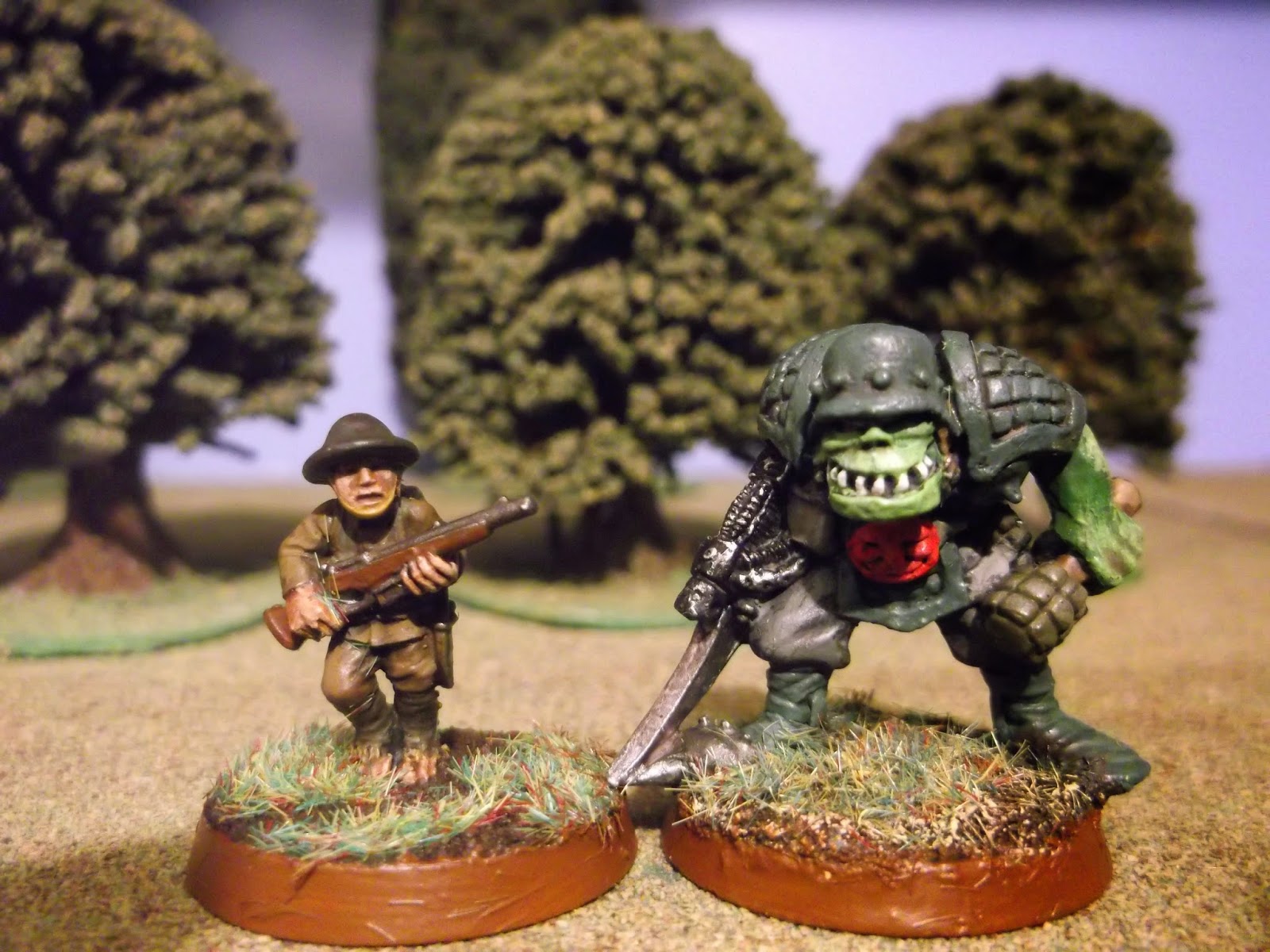 Scale size next to Rogue Trader Ork (in Stahlhelm!).
The details of the Halflings are excellent, and they are very characterful, as are a lot of Kev White's sculpting. However when placed next to Space Orks, even old Rogue Trader ones, they really do look tiny. I had planned on buying a little (excuse the pun) army of them, but not so sure now. They really do suit their Toughness 2 characteristic. 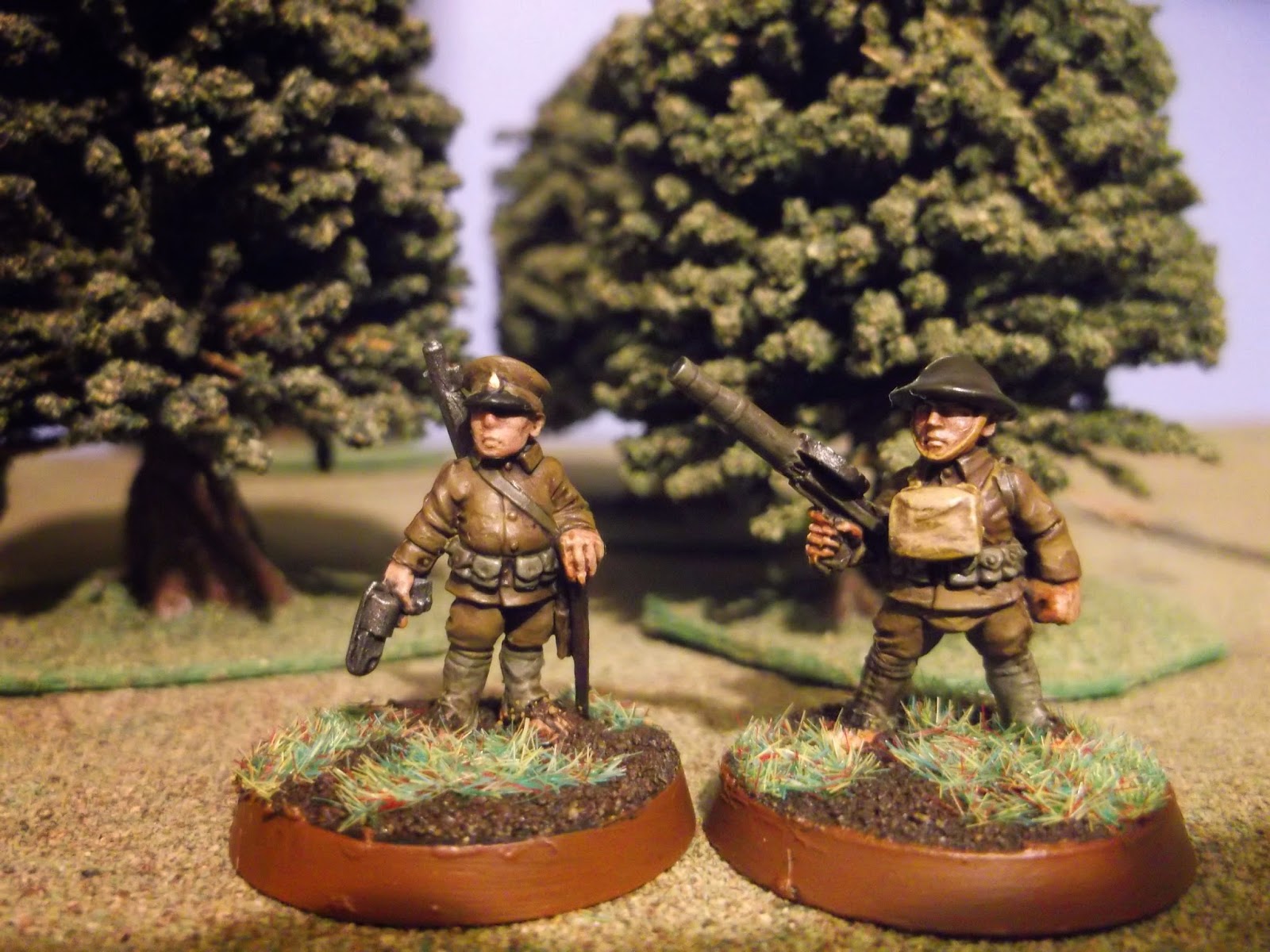 On the left, Captain Freddy Bagshott, officer in command.
Next to him is Sergeant Stan Gammage, with a dinky 'Lewis Gun'. 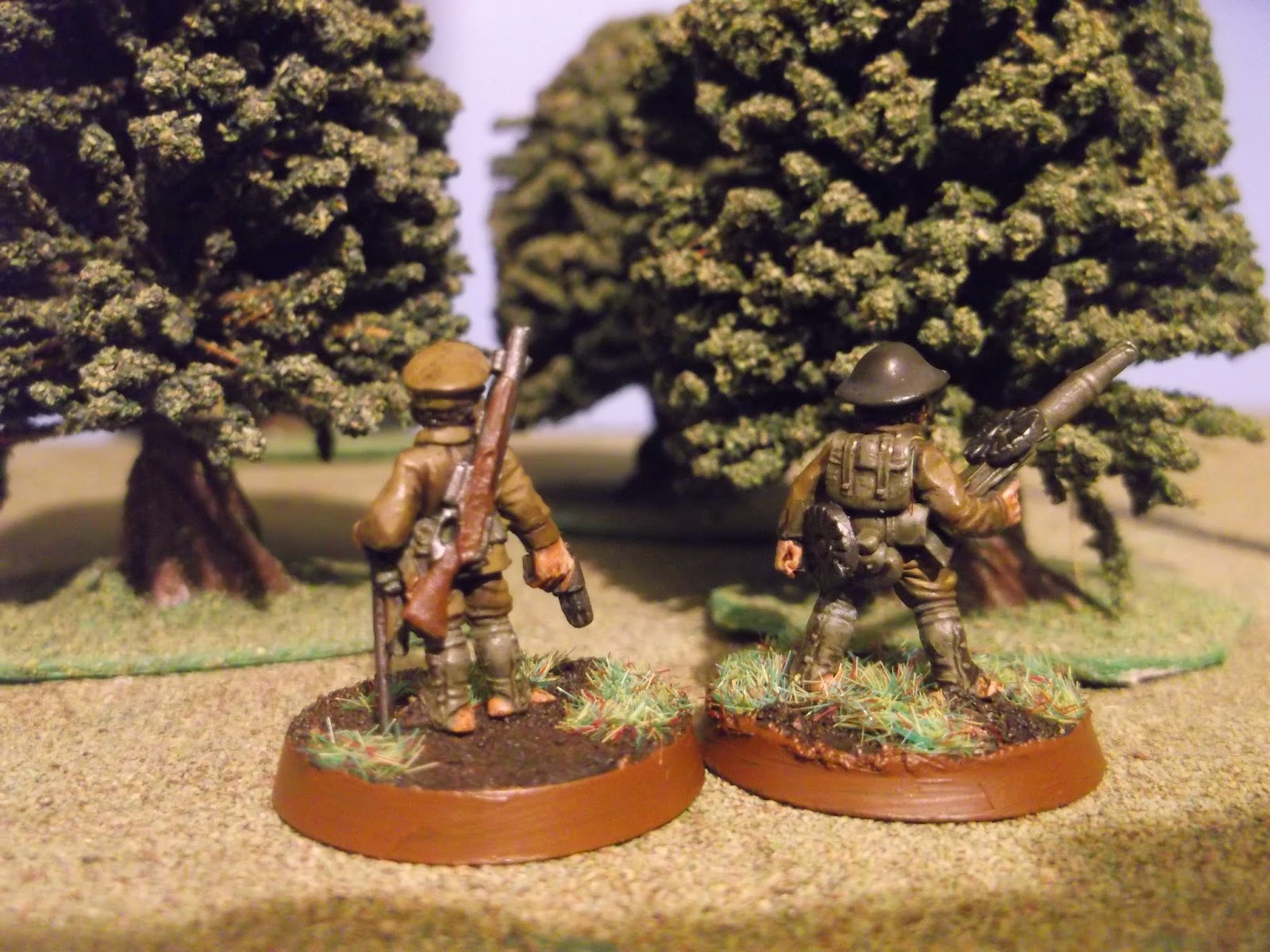 Rear views.
I love the detail of the spare 'Lewis Gun' ammo. 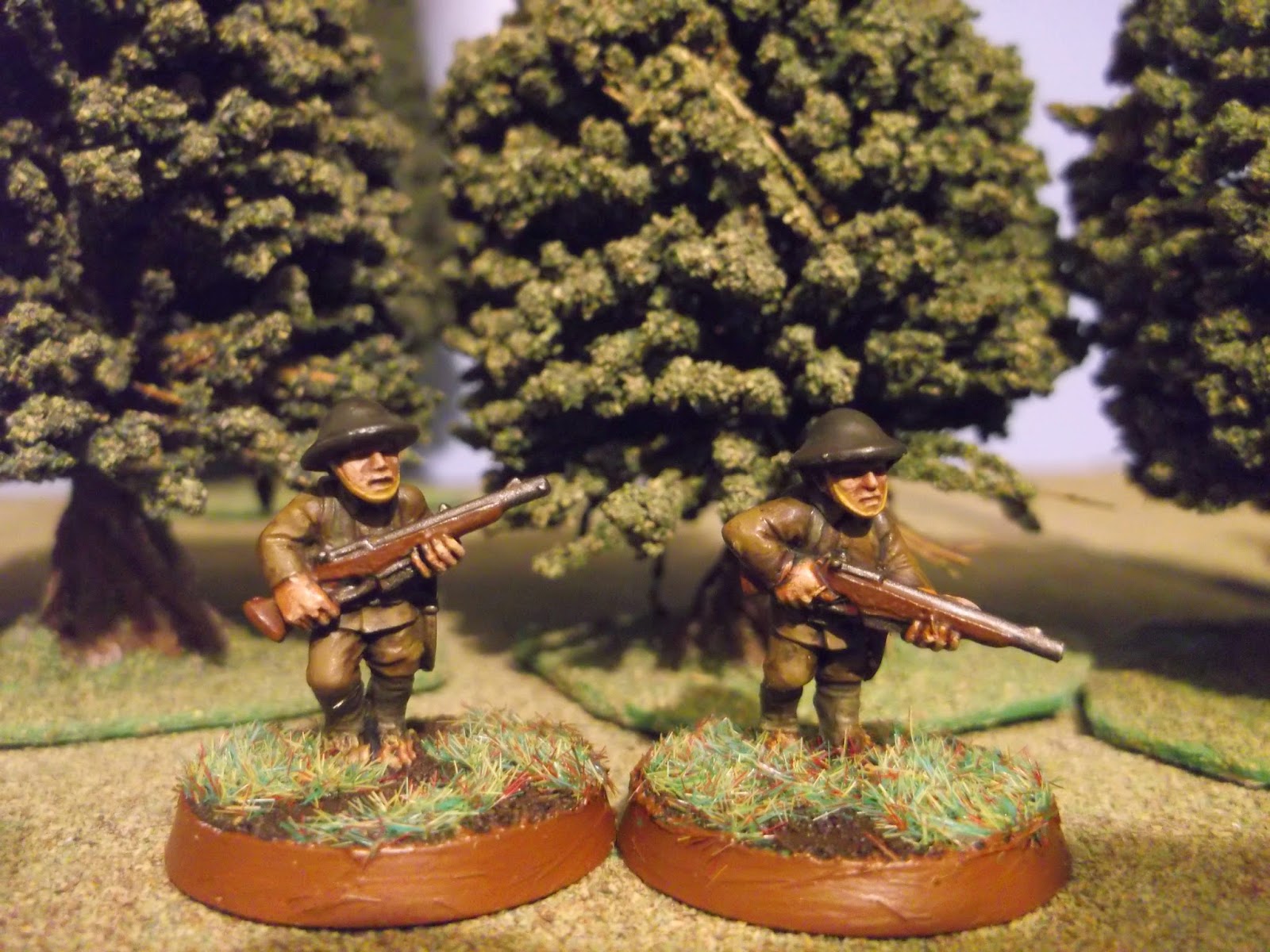 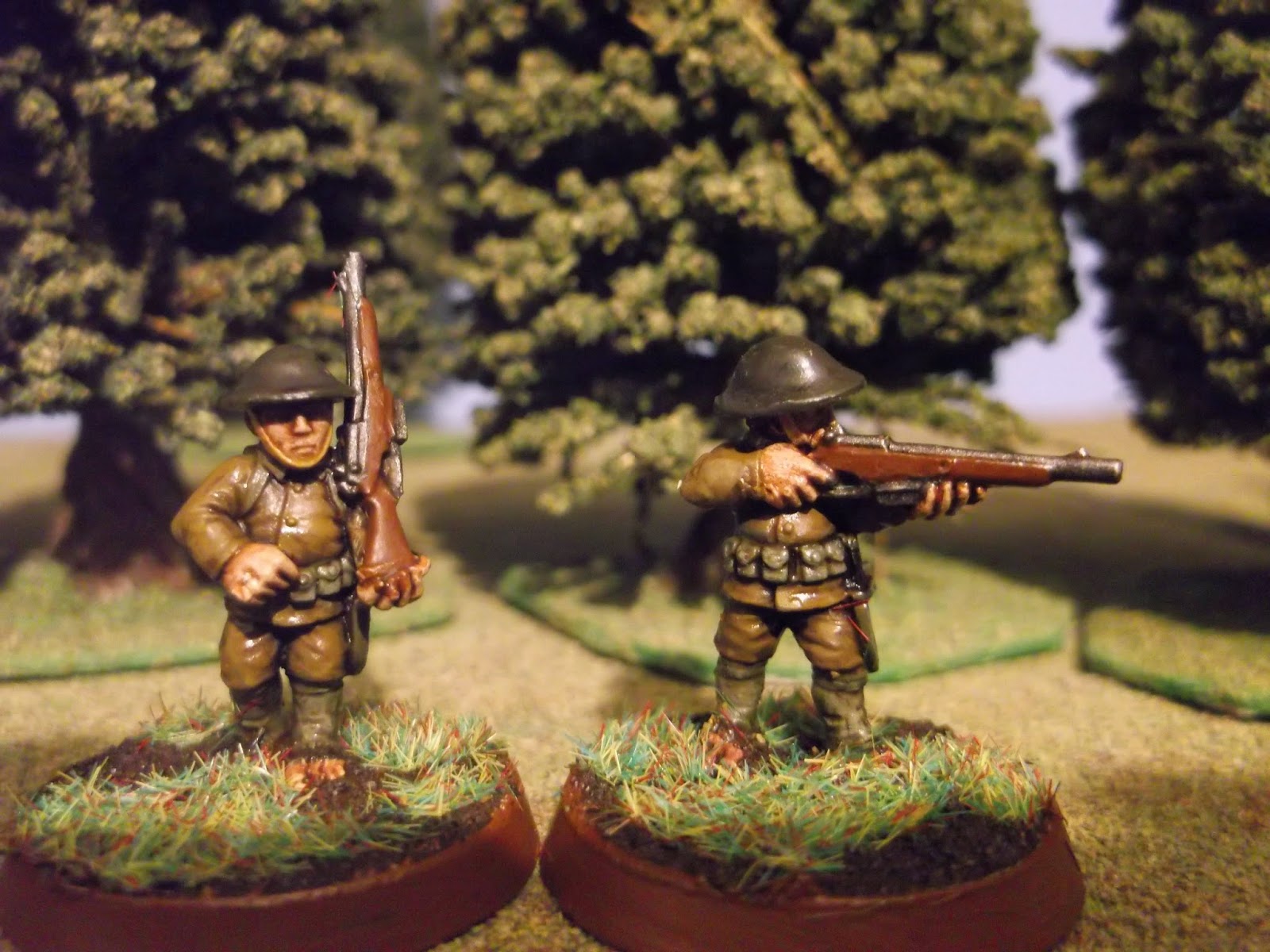 Left, Private P Yew, and Private H Yew on the right.
Those who grew up in the UK might recognise the names given to them by Hasslefree Miniatures as similar to the Firemen from the children's TV programme Trumpton. 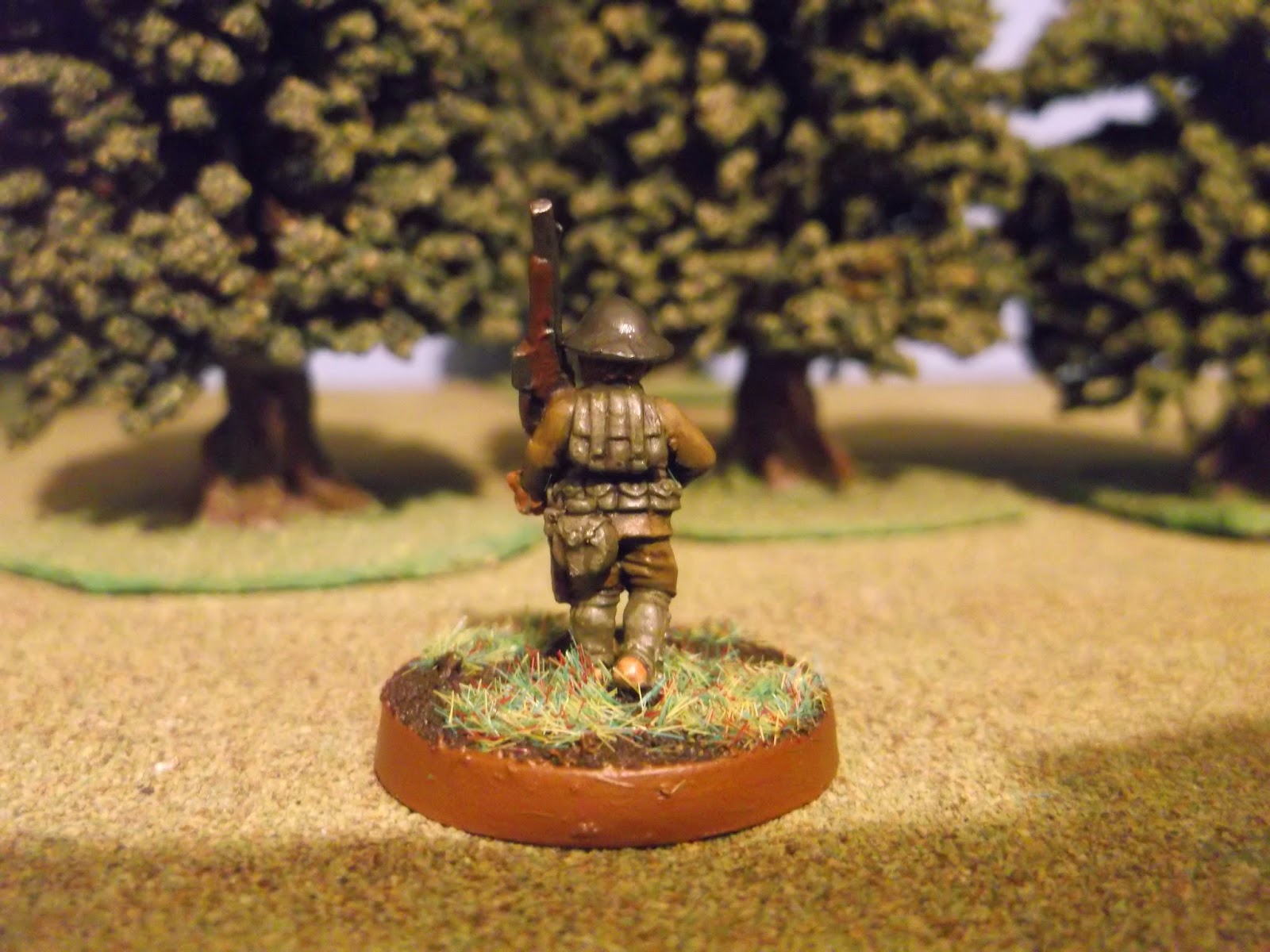 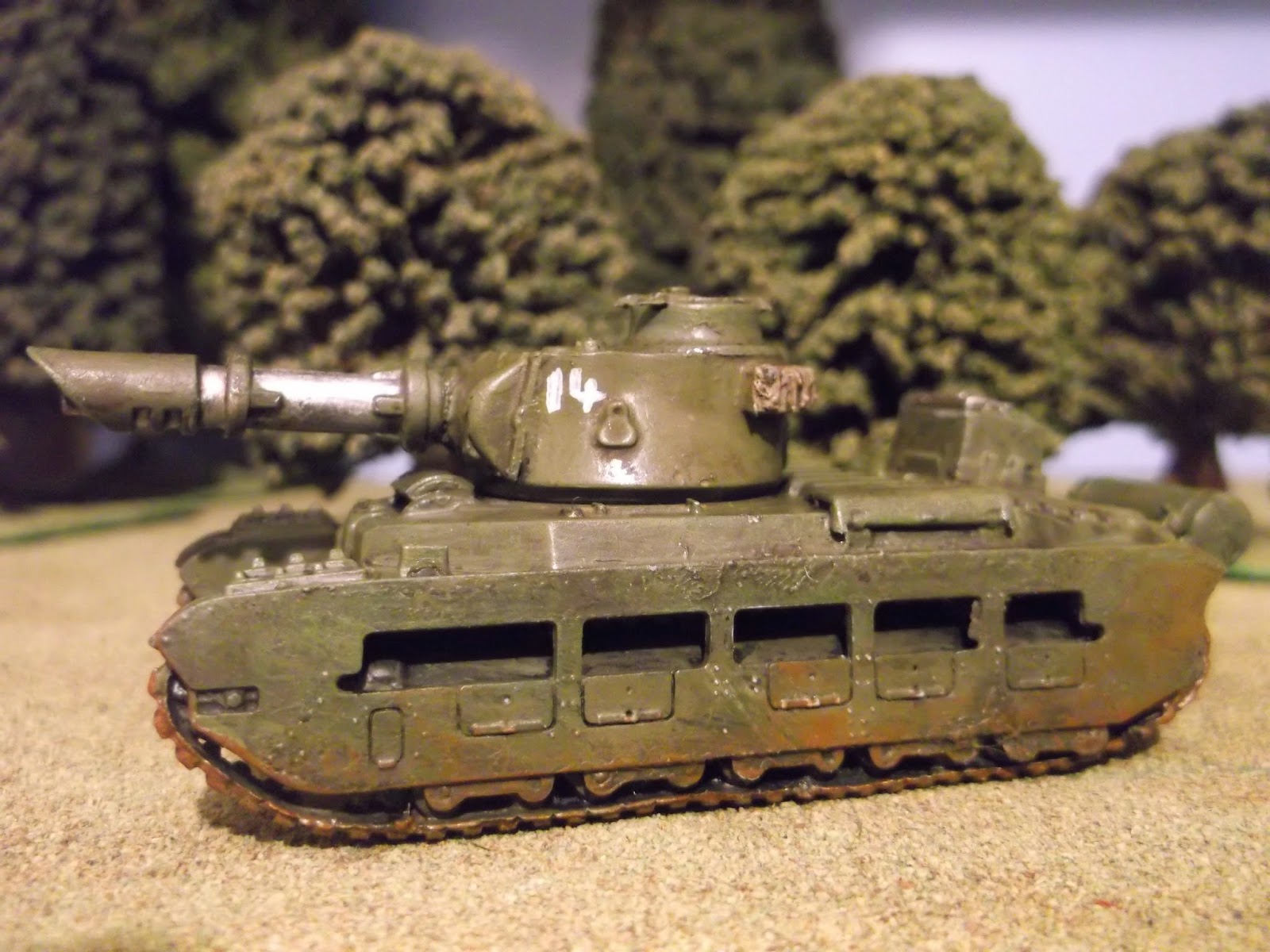 1/72 Airfix 'Matilda II' British Tank, used from 1939 and all through World War Two.
I have converted it up to have a Las-Cannon, from the Catachan Heavy Weapons set, and added the power pack on the back, and some pouches on the turret.
I love the fact with tanks named 'Tiger', 'Panther', 'Sherman', etc, we named our main tank 'Matilda'! 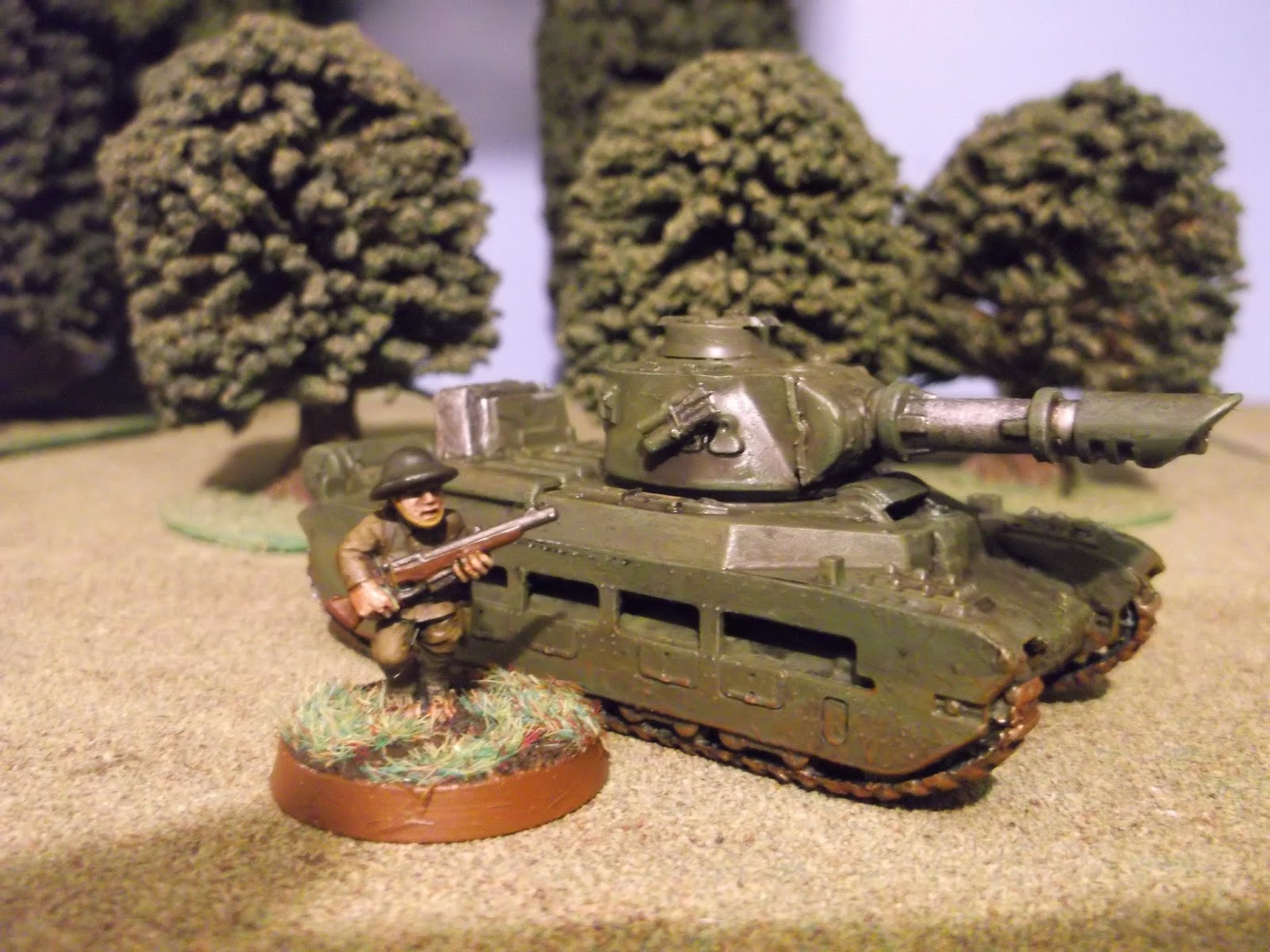 Right hand side view with a Halfling for scale.
I wanted to convert up a plastic tank kit to accompany the Halflings in a Rogue Trader style. I did'nt use Rogue Trader parts as they Kindred are'nt Rogue Trader themselves. 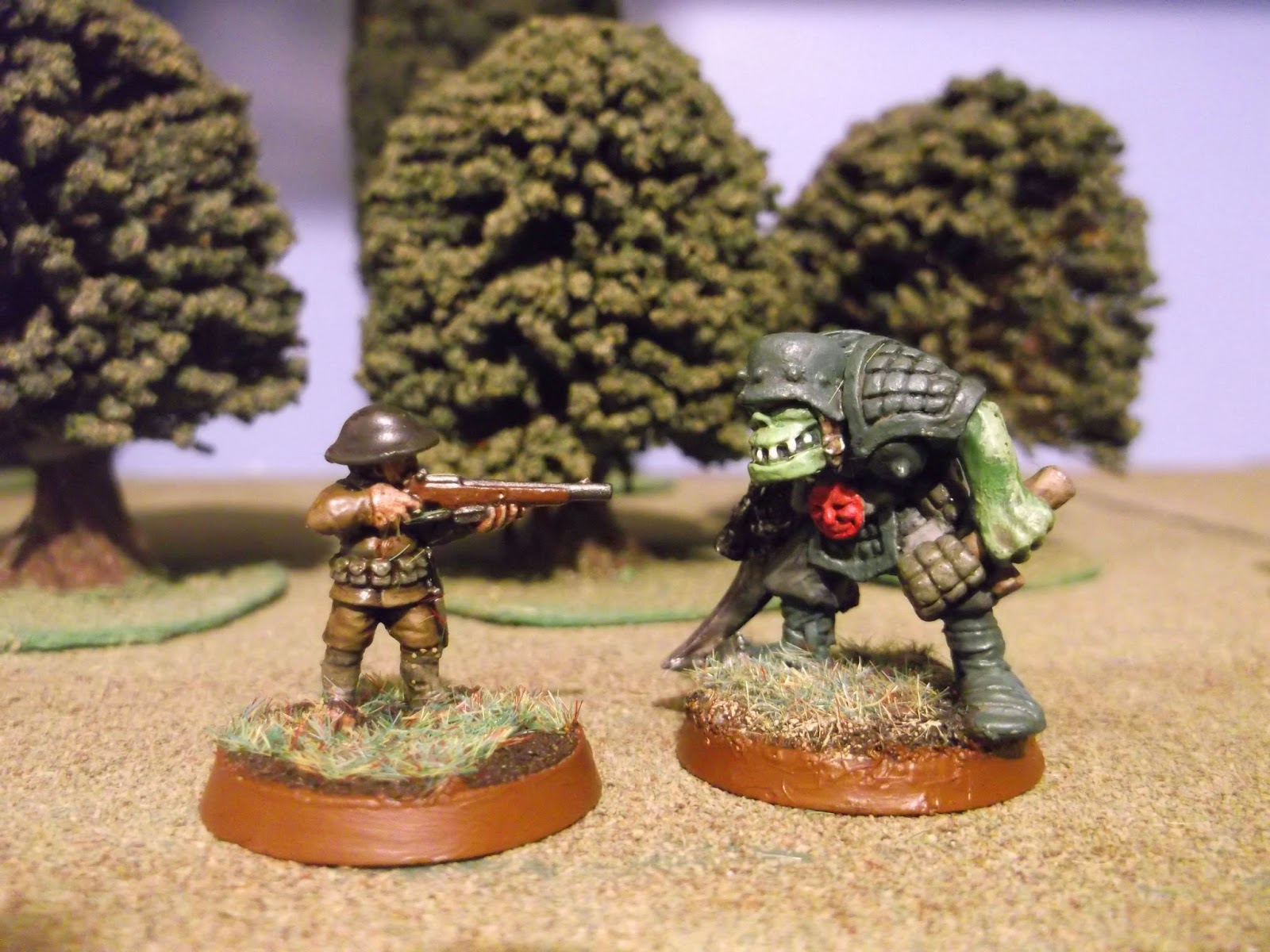 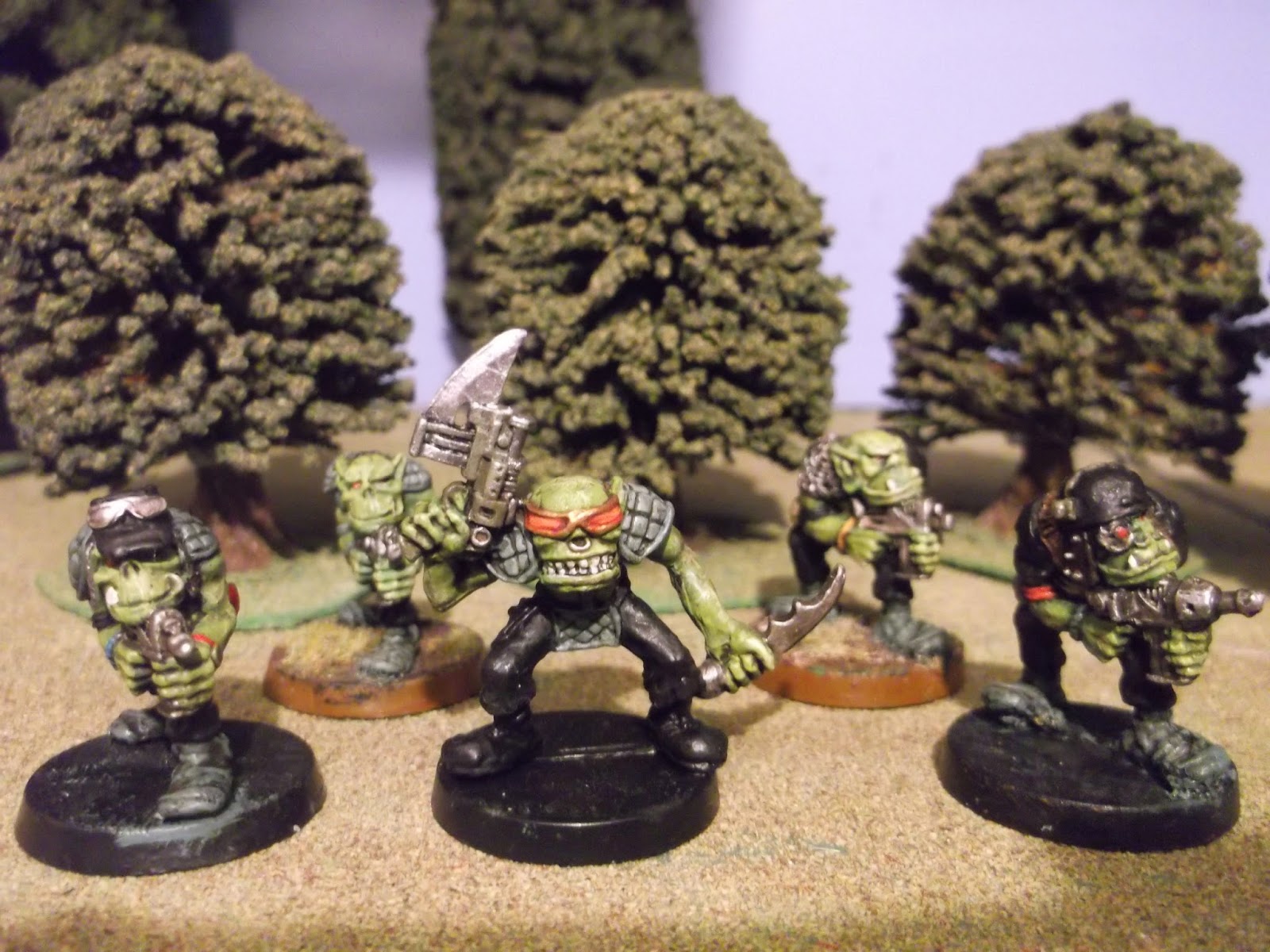 Space Orks of the Assault Grenadiers!
4 Orks from the Space Ork Raiders set being lead by Squad Leader 'Smiler Bogit'.
I have chosen a paint scheme to mathc the Luggub Drop Legion's Wehrmacht look, but also keep them slightly seperate. So I have opted for black uniform, but with Vellejo World War Two German Uniform Green for the flak armour and leg wrappings. Adding the green stopped them looking too bland and black, and also too much like the later Goff Clan concept. 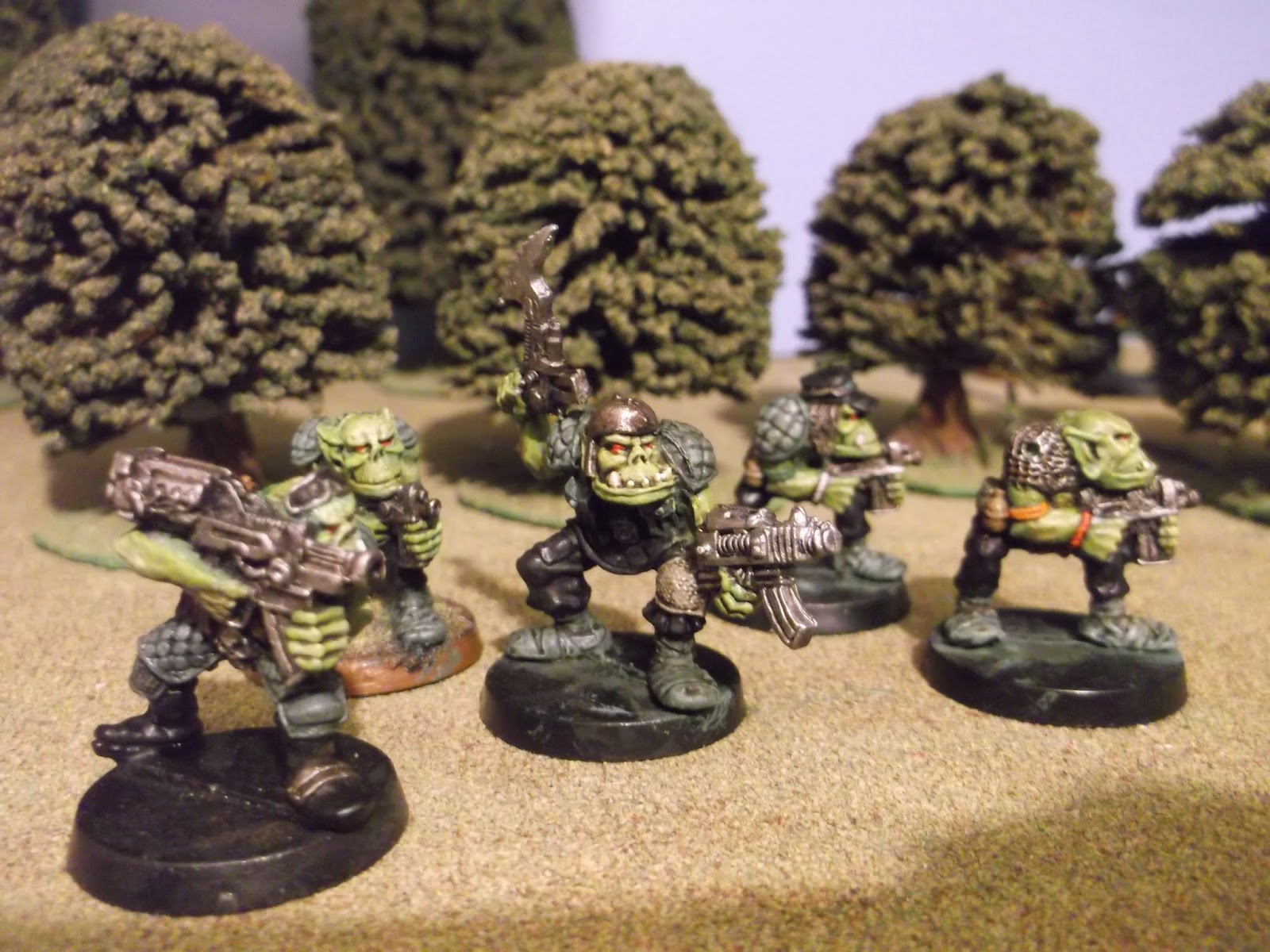 Second Squad, all from the Ork Raiders box set, including a Heavy Bolter Ork. 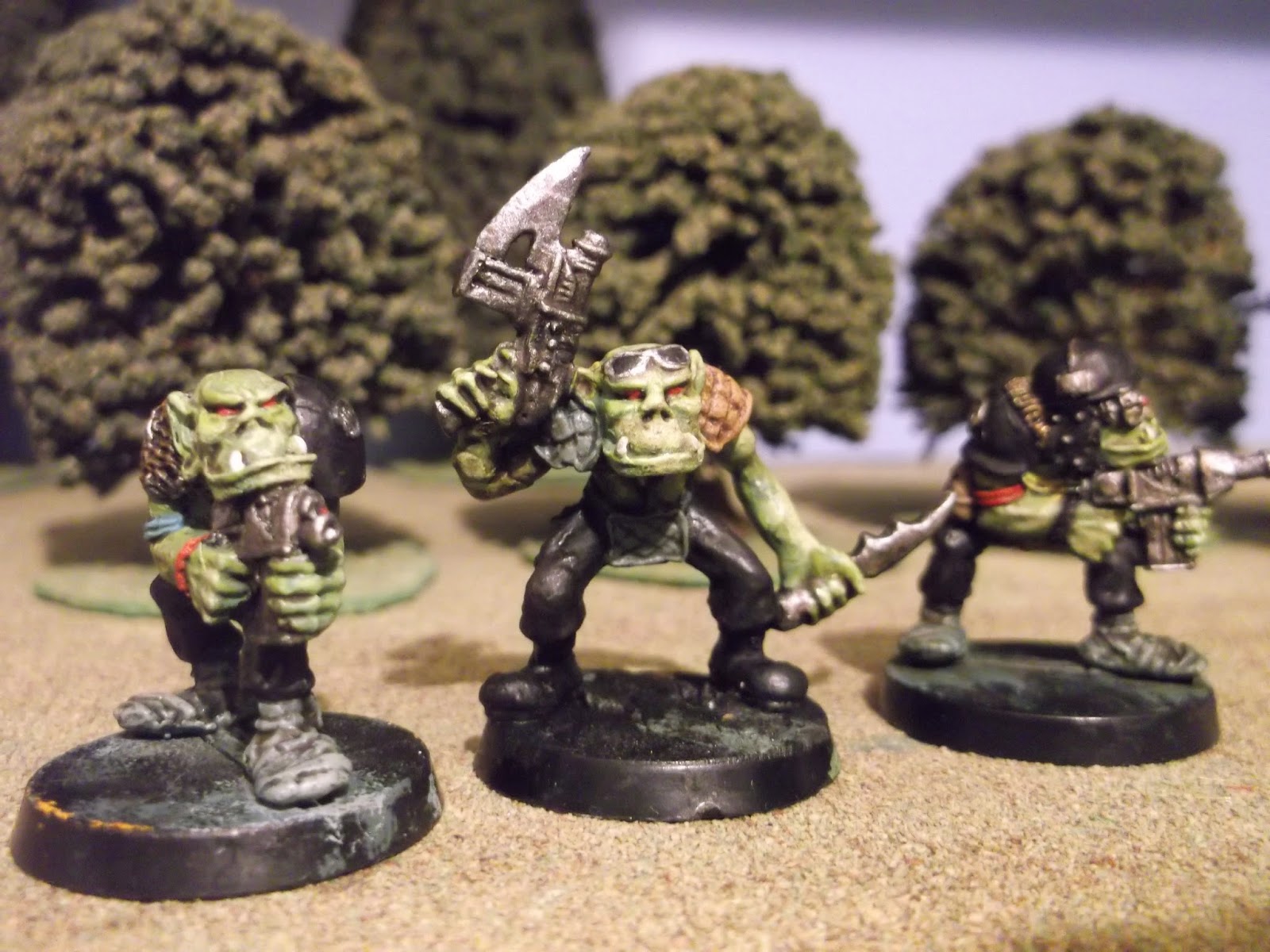 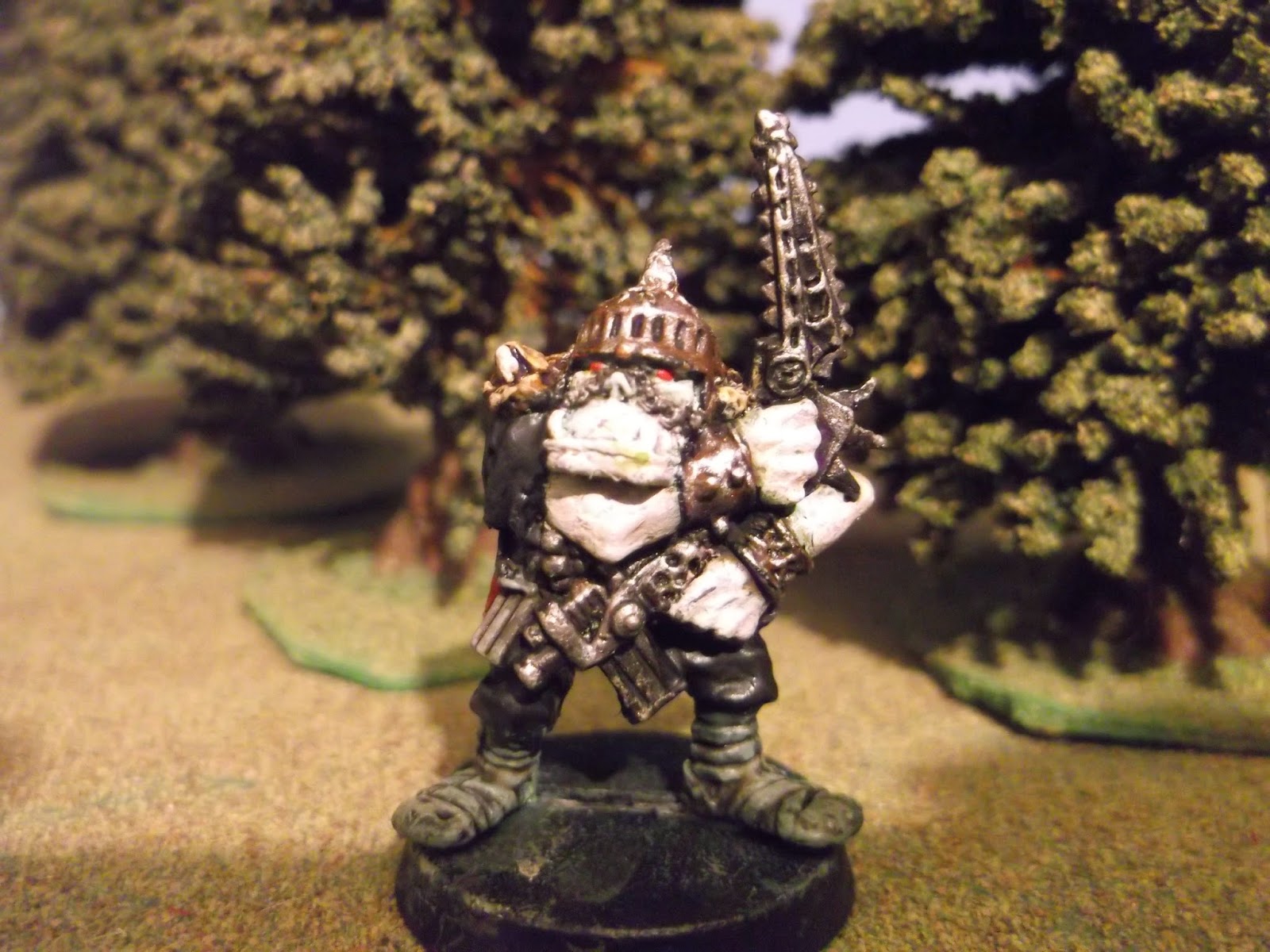 The albino Ork Captain Ulruk of Mergabenurga. leader of the Ork Assault Grenadiers from the Scenario 'The Battle of Jadeberry Hill' in White Dwarf #94. The miniature is the 'Buzzy Bazzacks' model I have used to represent him as he is similar to the Thrugg Bullneck model from the Space Ork Raiders box set.
I don't think it's too obvious to point out the similarity to Michael Moorcock's albino Elric of Melnibone? 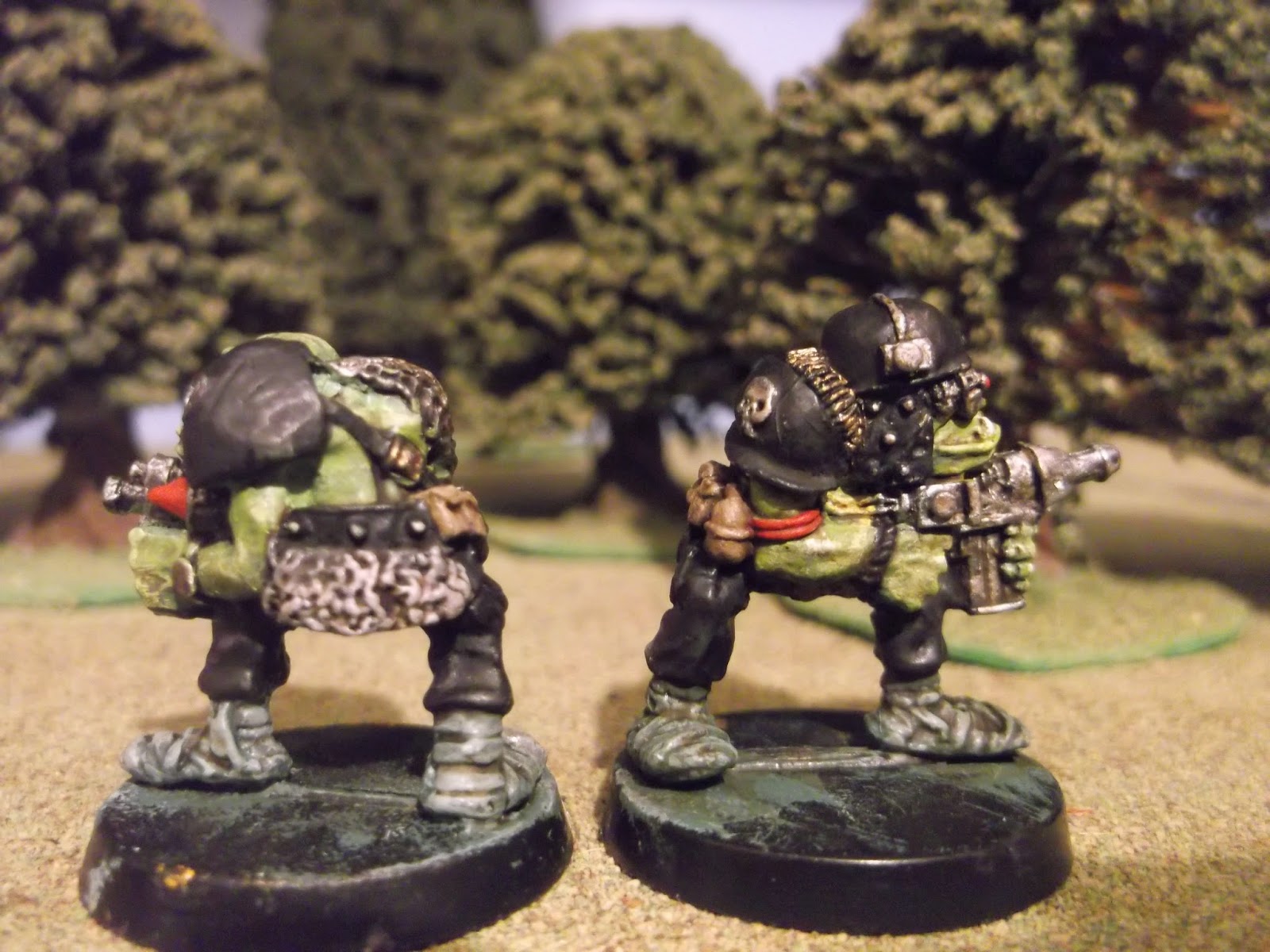 
Next weeks update will be on the finishing off of the Space Orks. I will be basing up the Skaven as I go, but I want to start a new project, and so will decide what to tackle over the next week or two and update accordingly. :)
Posted by Goblin Lee at 22:16