For this Blog update I am going to focus on one particular range of models, the Black Orcs by Iron Claw in the 1980's.

Recently I was lucky enough to the pick up the last of Black Orcs I required to complete the set. As I have also been sorting out my Orc Army at the time, I thuoght I would be good to paint up, and then look closely at this range in it's entirety.

The range was designed and sculpted for Games Workshop by Bob Olley and released as part of his Iron Claw Range, designated IC601. 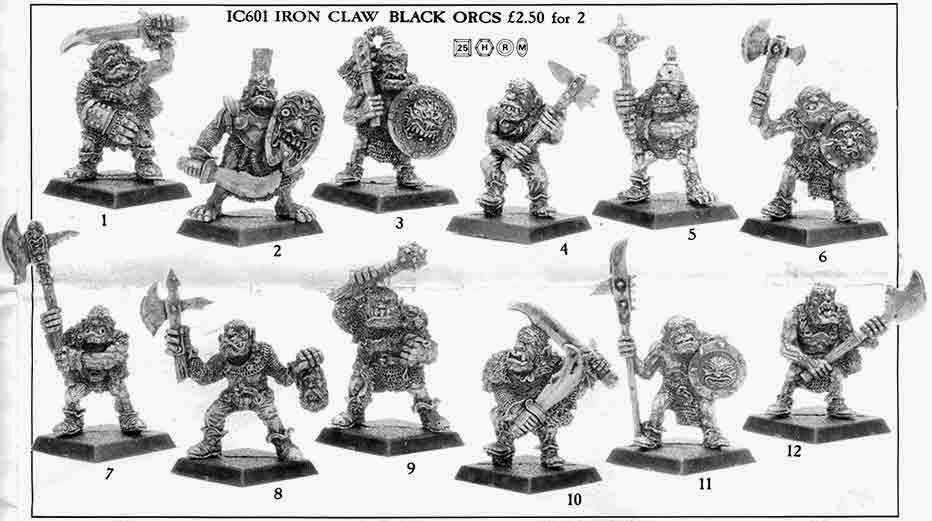 There is a discrepancy in both ranges I have noticed. I have assumed that Black Orc #7 from the 1998 release is the same as 'Halberd 2'. However, the stand of 'Halberd 2' looks slightly different, and he has a (plastic) shield on his back, something which Black Orc #7 does not have a tab to allow. So the may be another Black Orc variant. 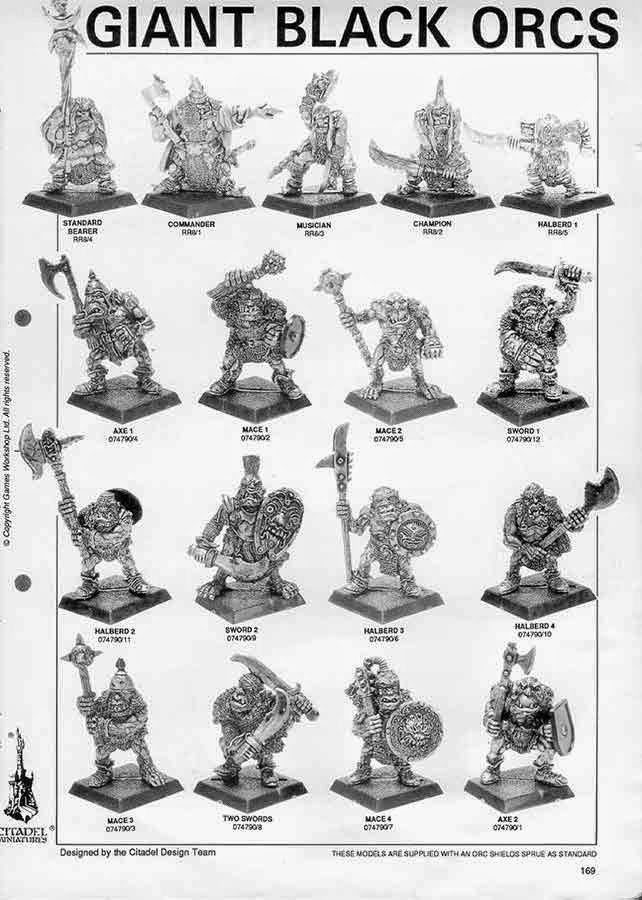 Many of the miniatures from 1988 failed to make it into the 1991 catalogue, but from memory I recall that several of them were still avaliable in blister packs for some time.

Personally I like Bob Olley's sculpting, but I do understand that they are not to everyones taste. I confess that, apart from the Goblins, I was never very impressed with the any of the Iron Claw ranges, especially at the time. However there is a certain 'true-ism' that Bob Olley's sculpting looks awful until you paint it and then it all comes together, something which I have found also to be true, especially the Squat ranges.

One of the best details I liked in this range are the shields. Personally they are reminiscent of Ian Miller's excellent Lord of the Rings artwork. With that in mind I have painted them up in the sympathy with the artwork. 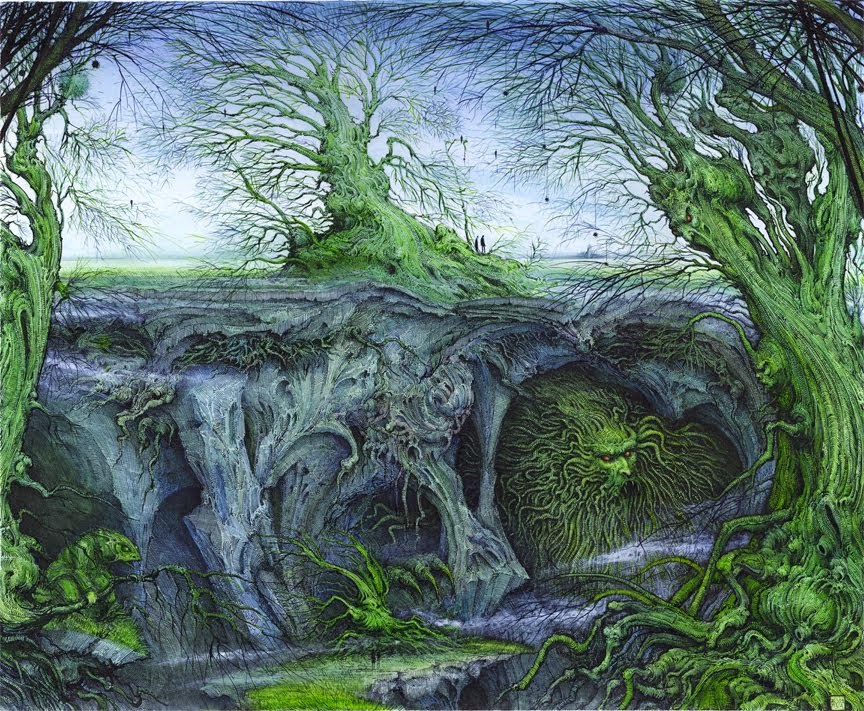 Ian Miller's artwork  which inspired my shield painting.
(Legal bit: this belongs to the wonderfully talented Ian Miller and is only shown to illustrate the sculpting and painting of the shields).

I plan to use these miniatures as some of the Mordor Uruk-Hai in my larger non-Peter Jackson Lord of the Rings army. I have painted them in sympathy with the description of Uruks ans Orcs in Tolkiens books, 'dark clothed, flesh the colour of wood charred by flame, and eyes like hot coals'.
To achieve this I undercoated the miniatures black; drybrushed the whole model a mid brown (Citadels Mournfang Brown, the old Bestial Brown colour), and then lightly applied the rest of the colours allowing the dark undercoat to come through. For the flesh I used Vallejo German Field Grey. All the miniatures were given a black wash to give greater depth and tie in the details.

I have photographed all 15 of the Bob Olley Black Orcs, both front and rear to give a better idea of the deatils and sculpting. 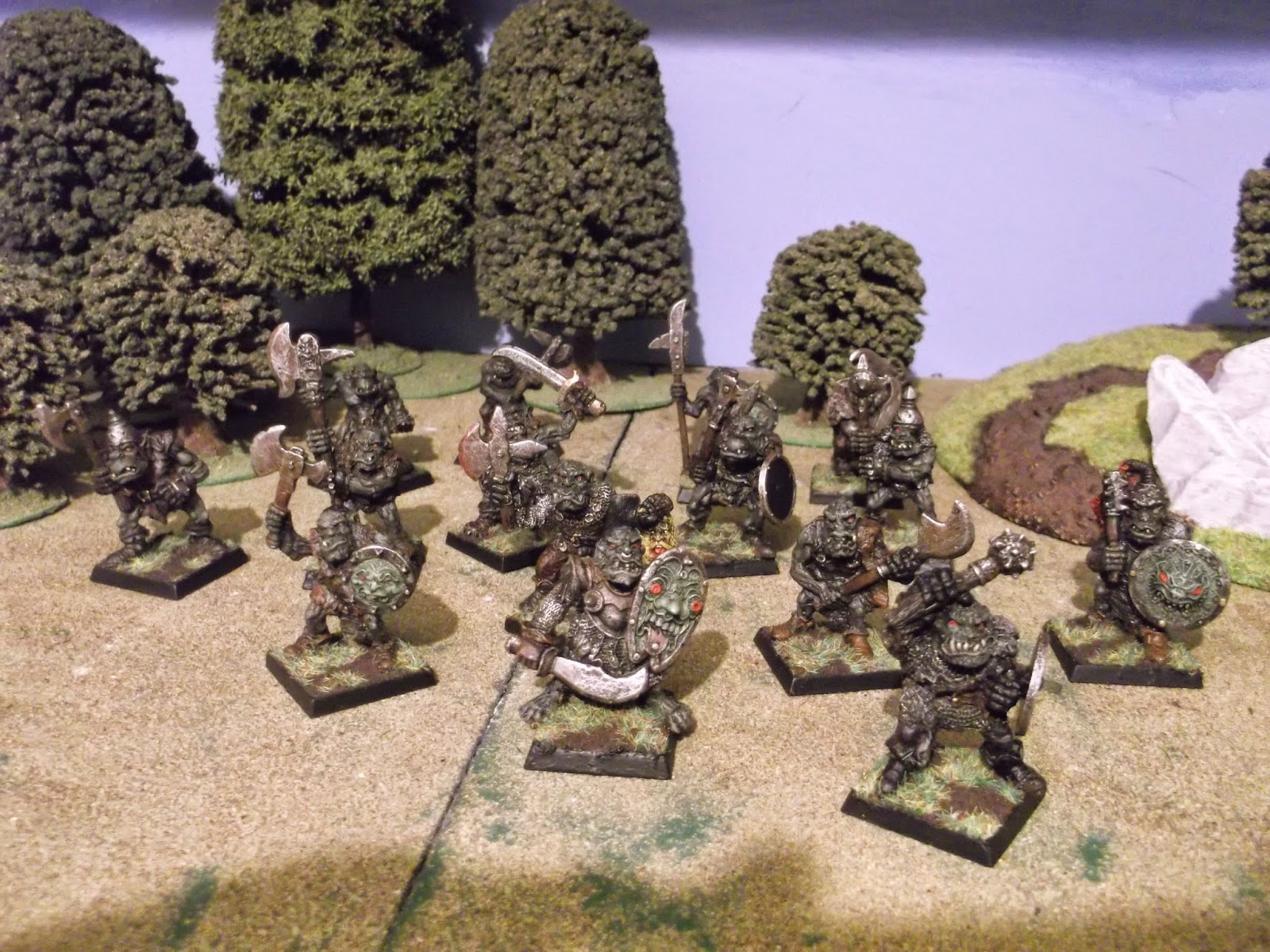 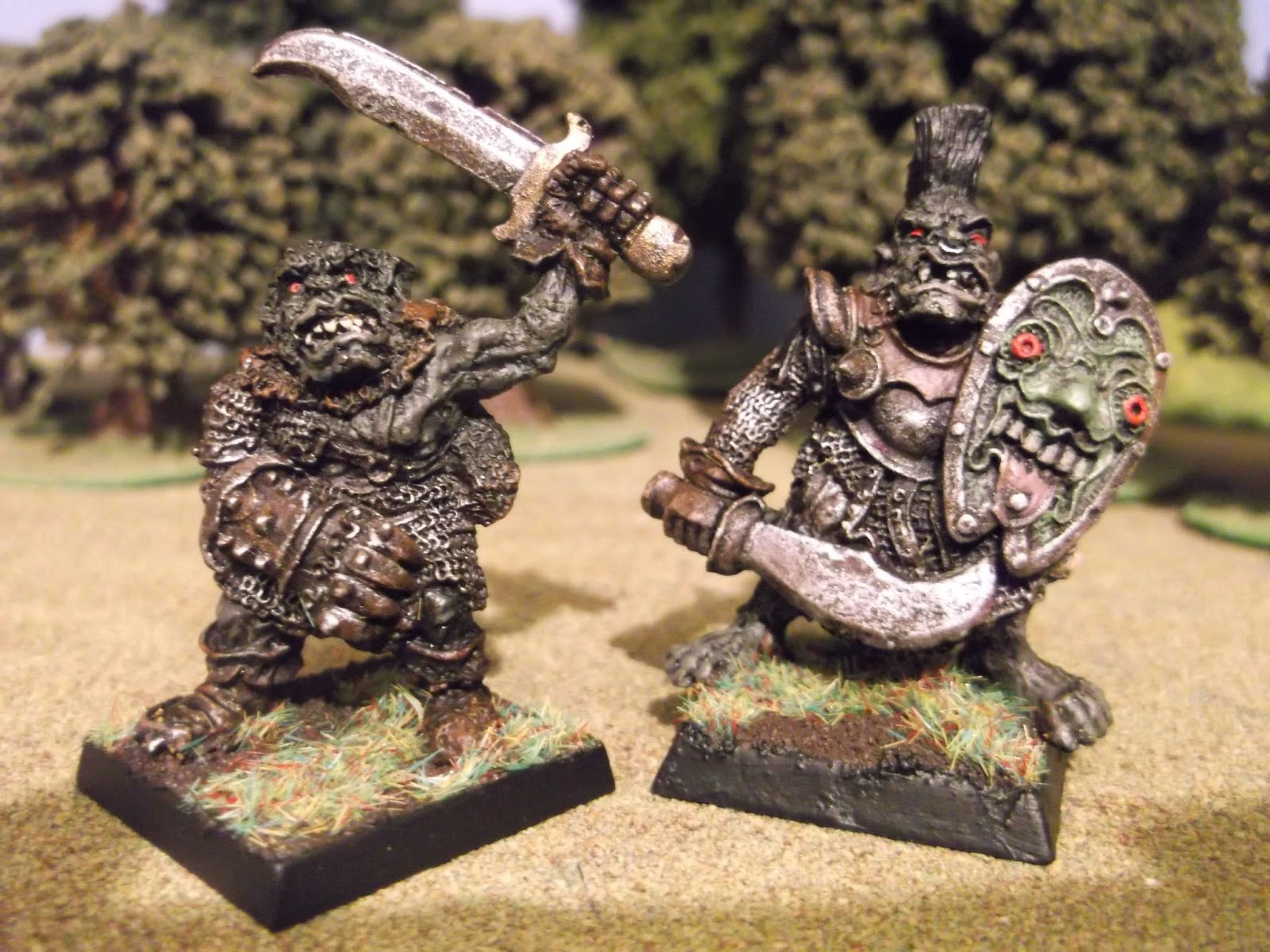 From the 1988 release sheet, Black Orcs #1 and 2.
I love the detailing on both of these miniatures. Number 1 has an excellently detailed and very heavy looking gauntlet.
Black Orc #2 is a very much a leader model, and the shield has a lovely detailed face to it.
I have photographed closer shots of the shields later in the blog.
As a point of reference, all the miniatures are based on 25mm square bases, which may give you an idea of the larger size of the miniatures. 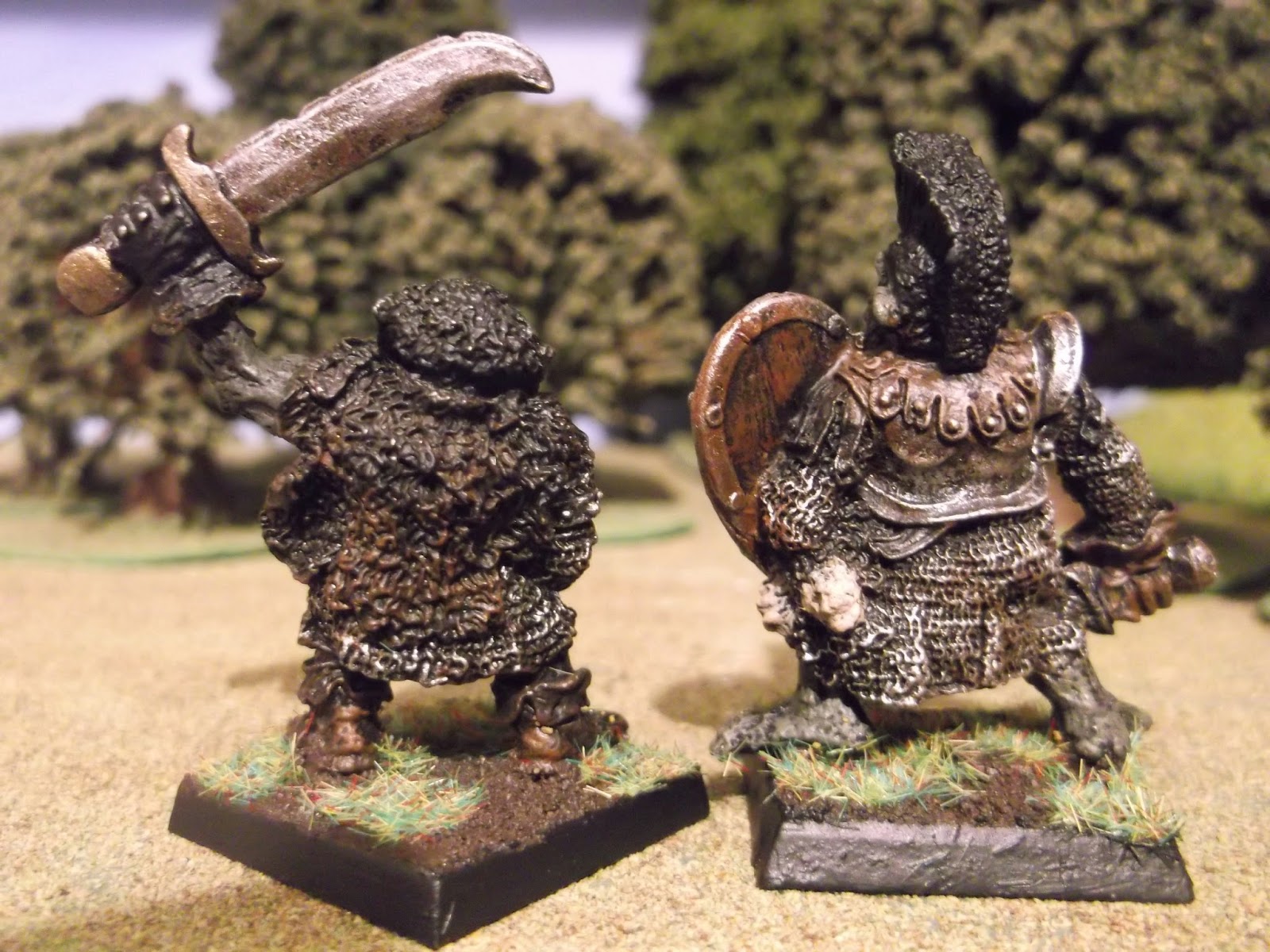 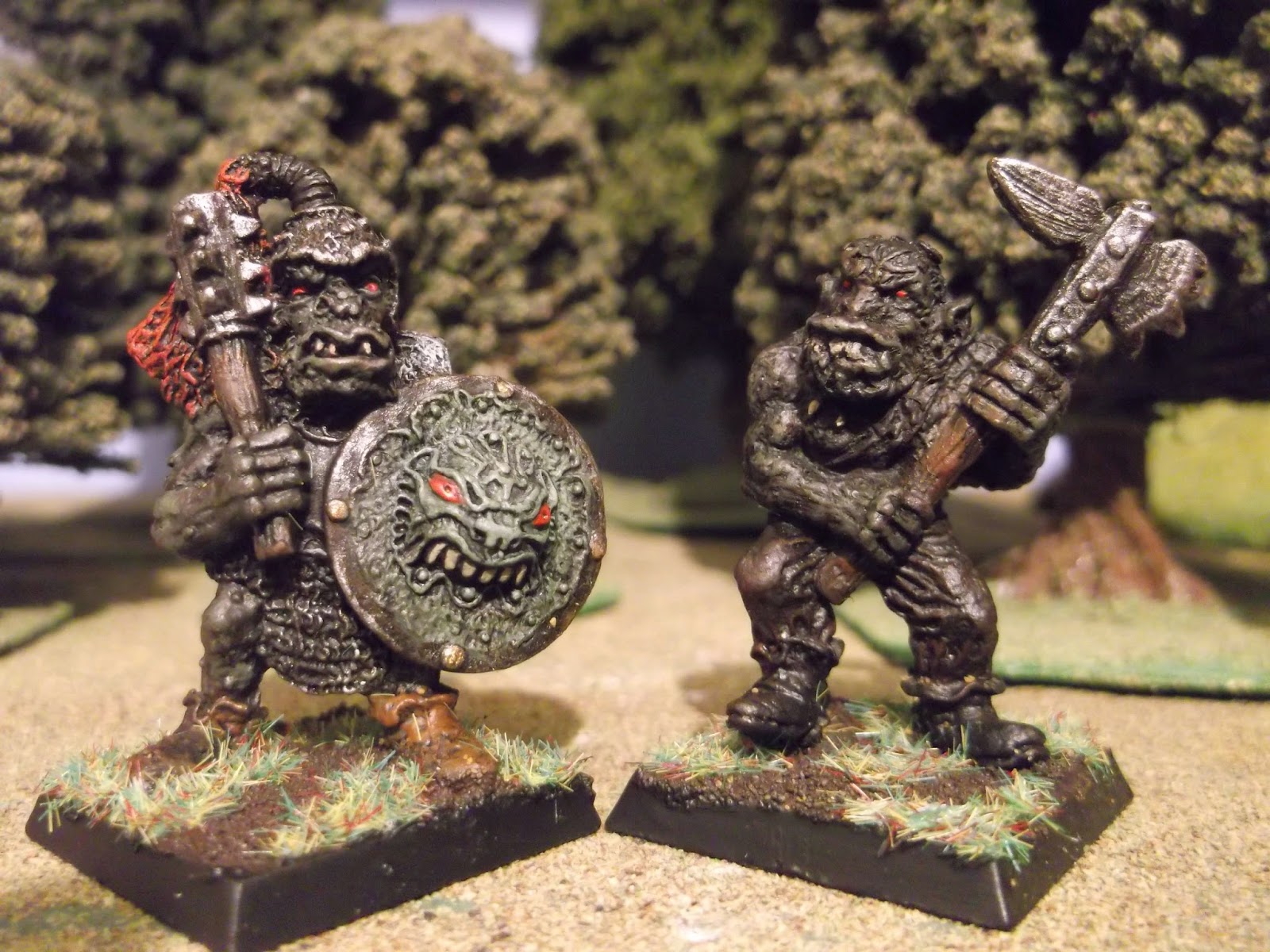 Black Orc 3 and 4.
Again an excellently detailed shield on #3, which is also based on the same body type as Black Orc #2.
As I have noted in other previous blog updates, Citadel, and those sculpters who worked on sister ranges, built up ranges from a basic core of sculpts and then converted other models from that range to add additional models. 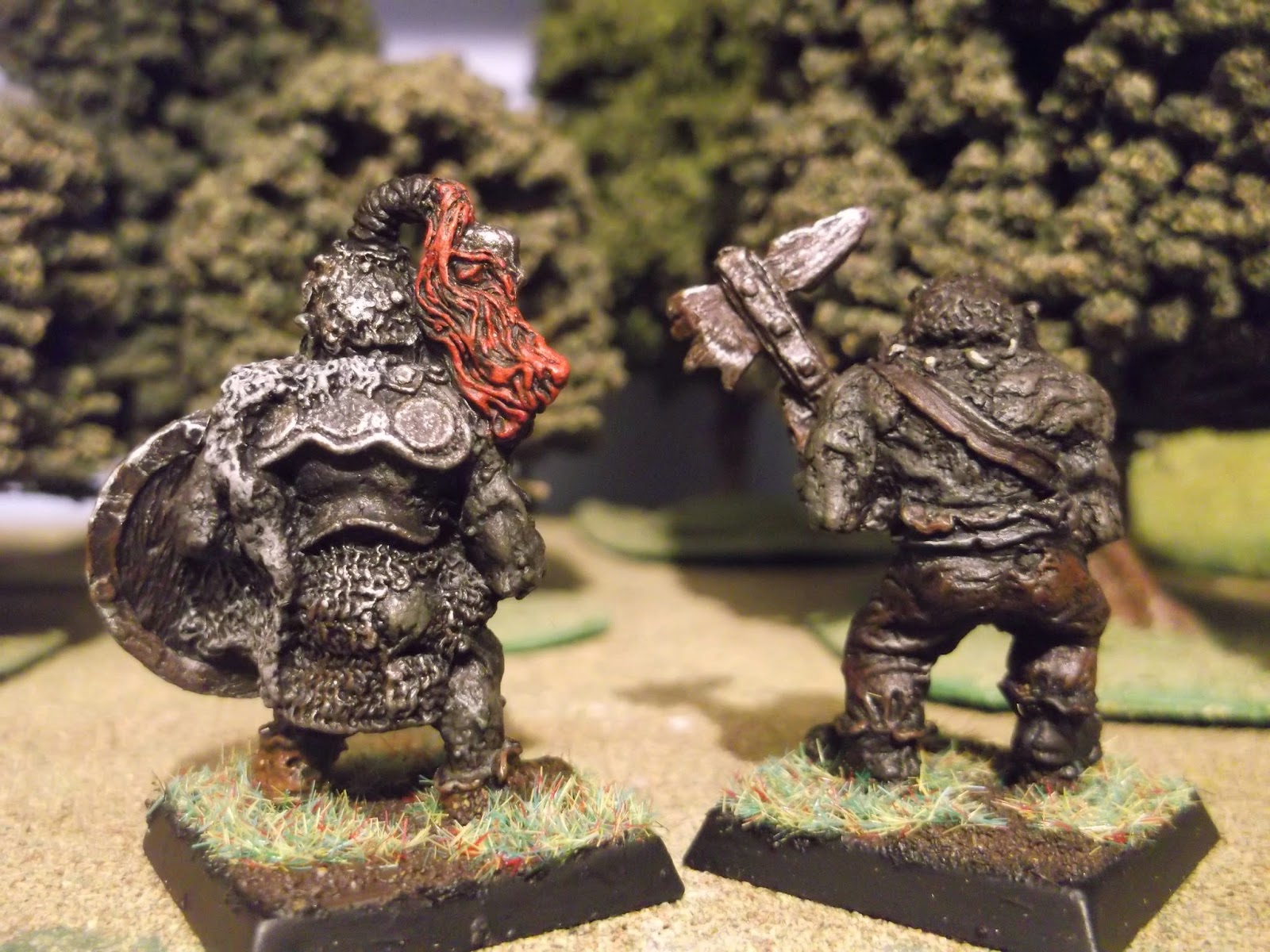 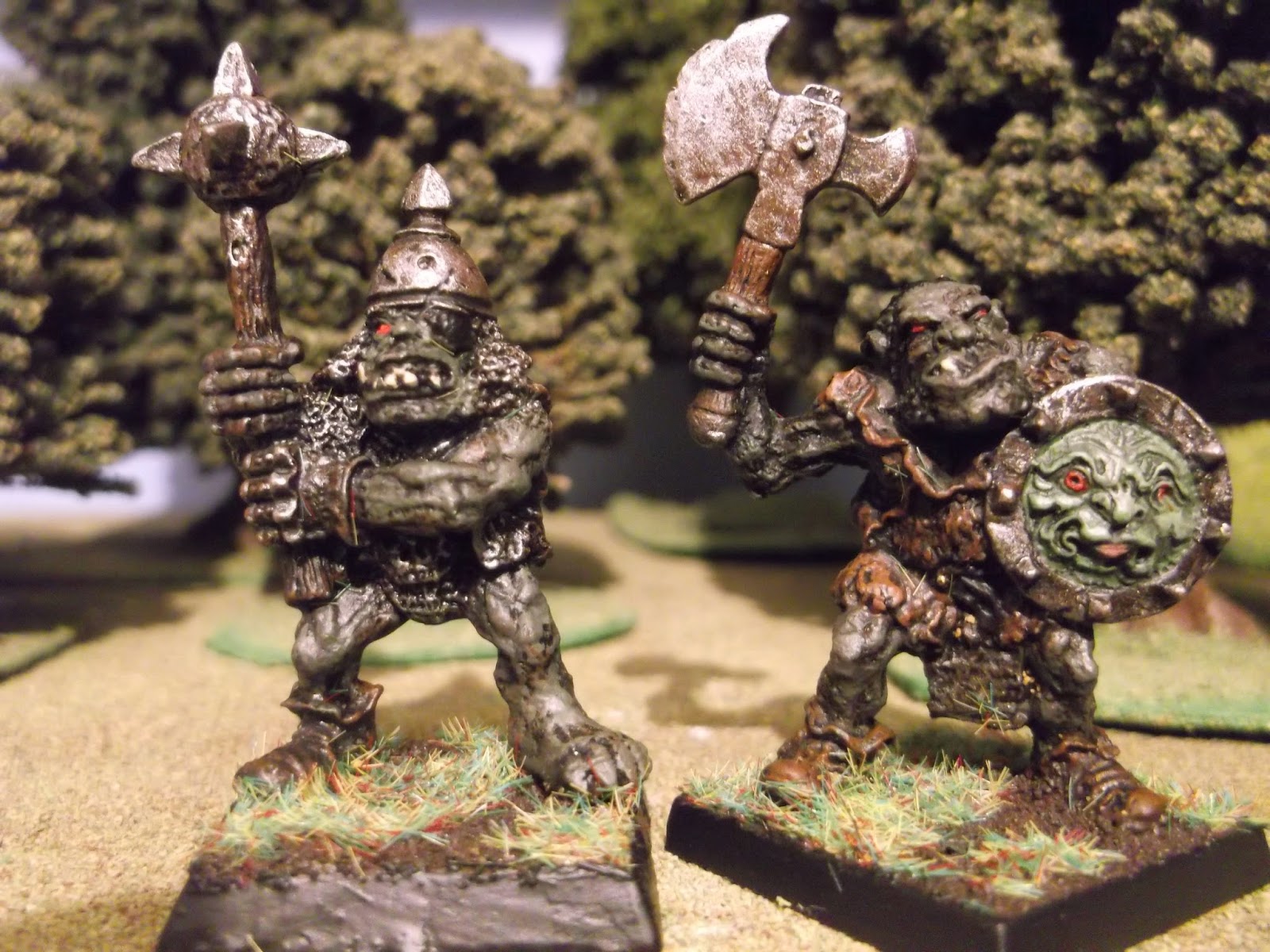 Black Orcs #5 and 6.
Black 6 has an eye patch and vicious looking mace, whilst #6 has another Goblinoid looking faced shield. 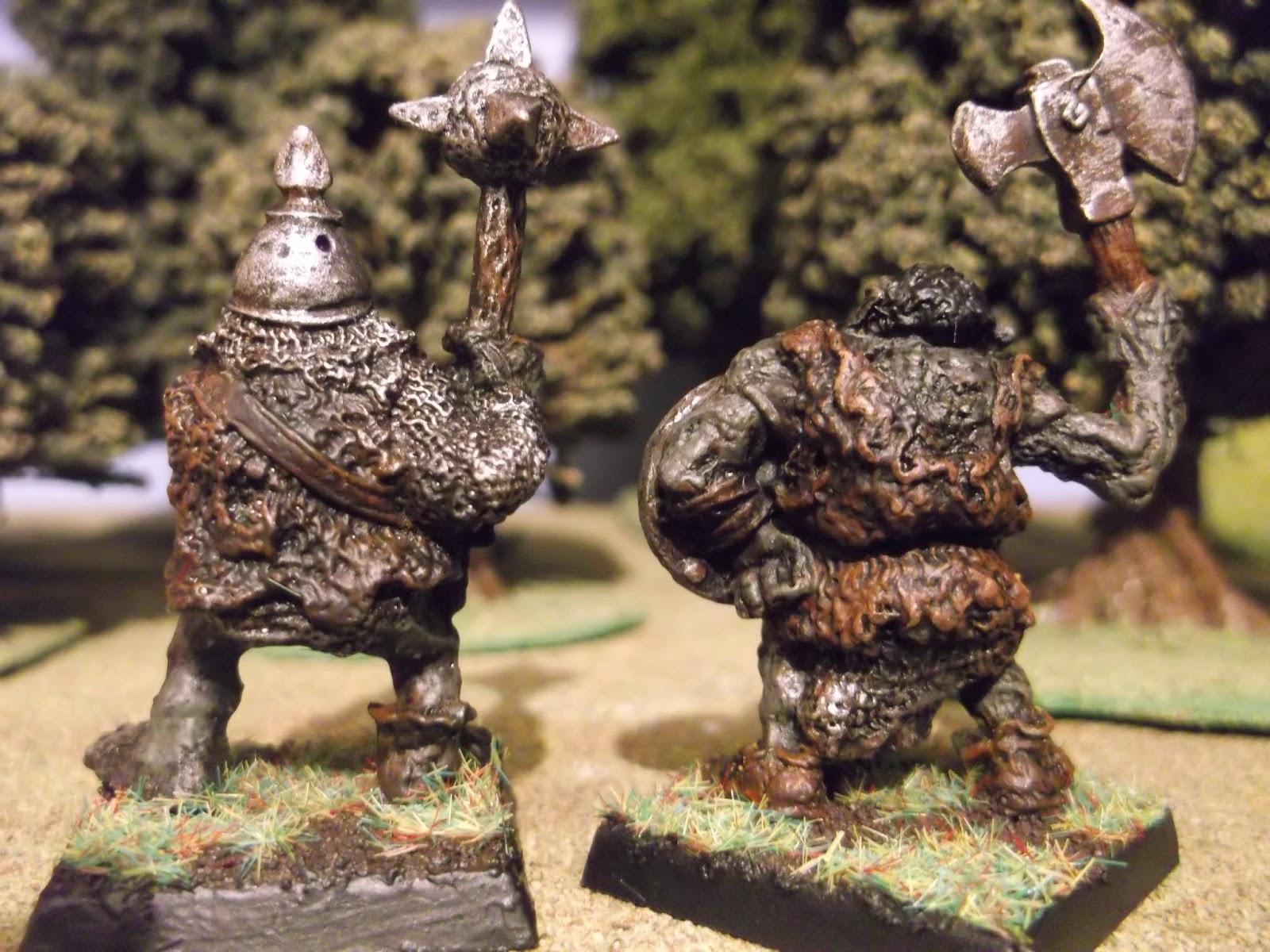 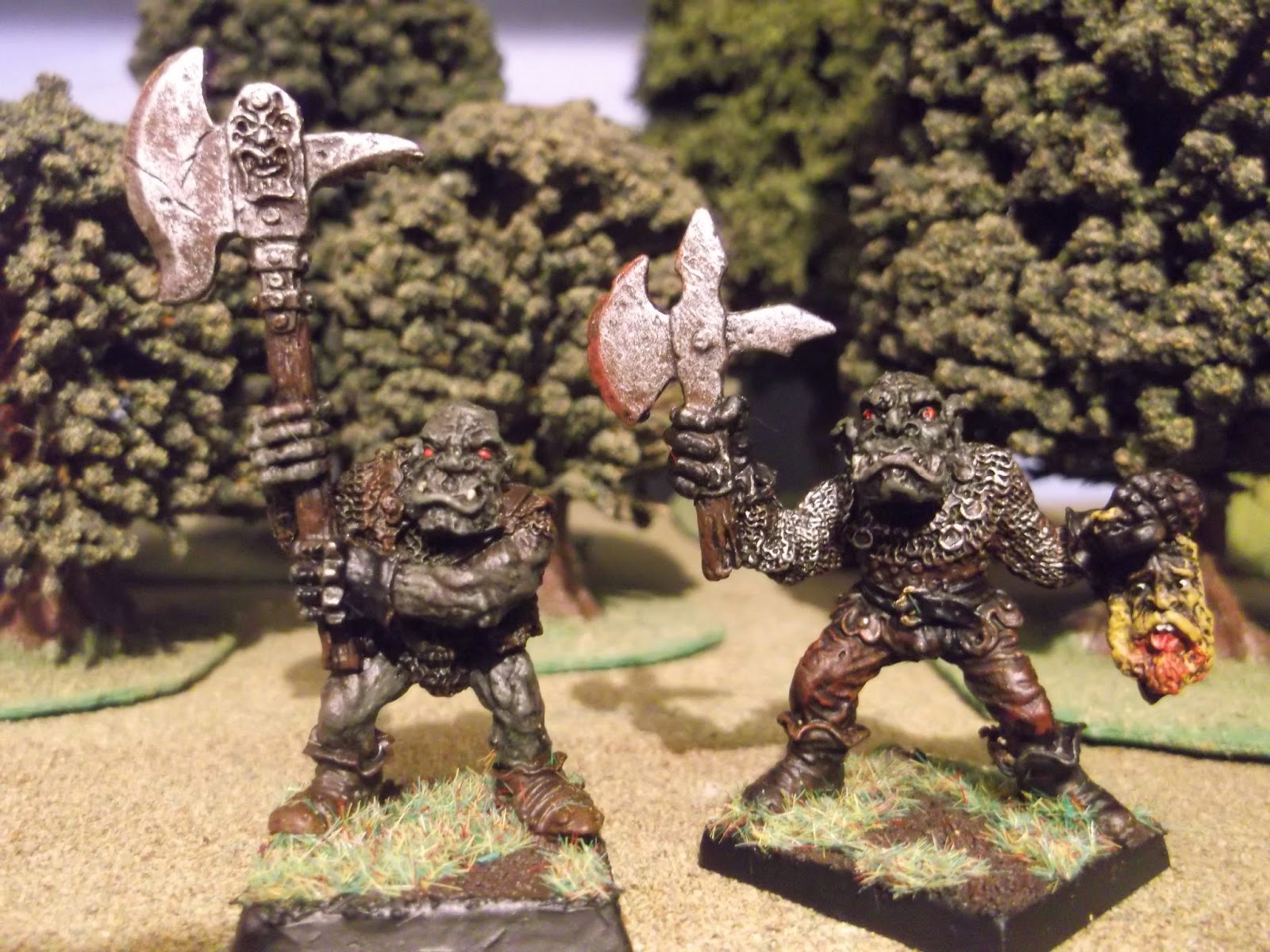 Black Orcs #7 and 8.
Black Orc 7 has a nicely detailed halberd with a face.
Black Orc 8 has the severed head of either a Dwarf or Human. I have painted him blond, like a Rohan, in keeping with the Lord of the Rings theme. 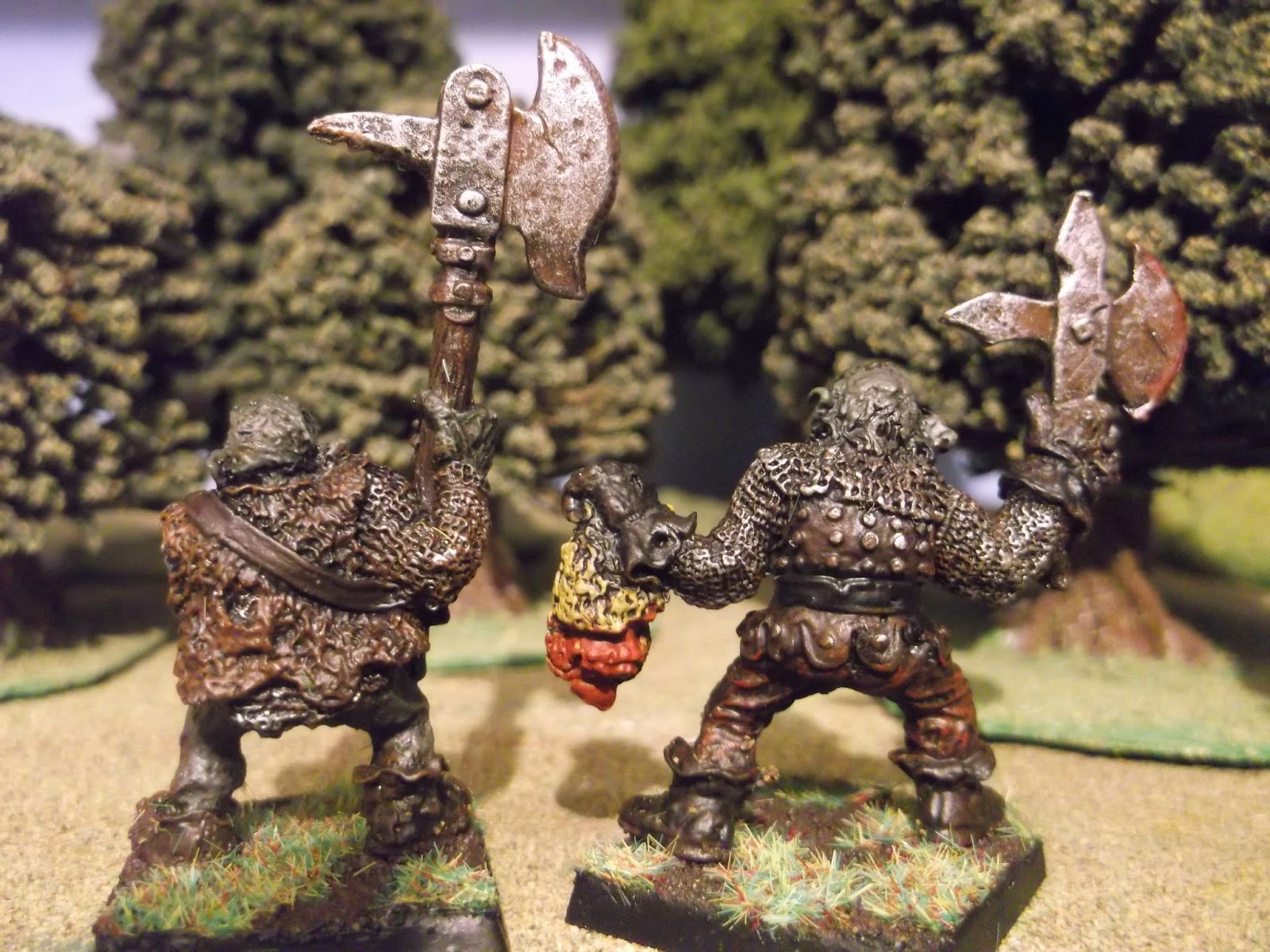 Rear views.
Number 8 has the same body sculpt as #5. 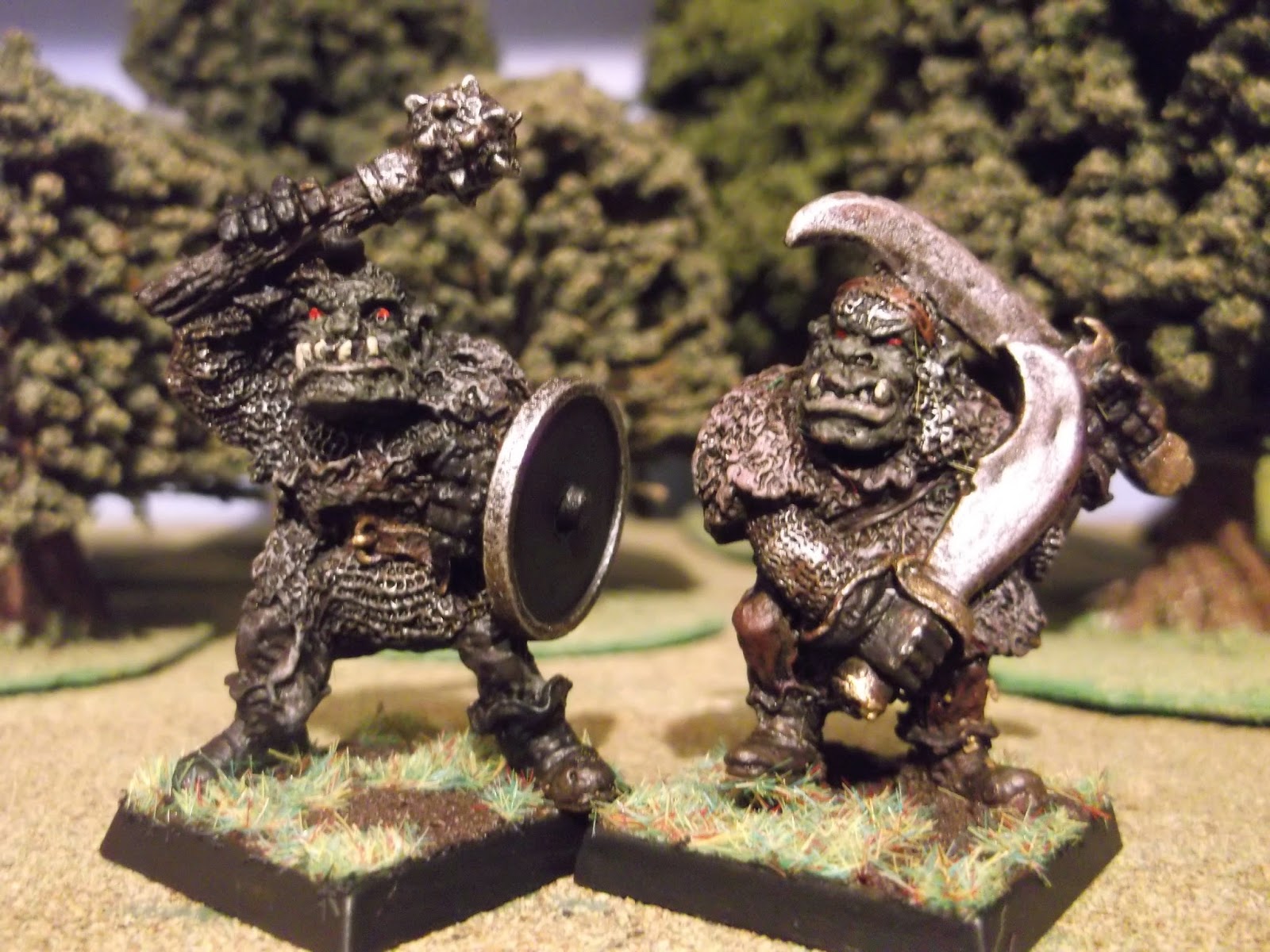 Black Orcs #9 and 10.
Black Orc 7 is pictured in the release sheet without a shield, but on the miniature there is a tab for a plastic shield. 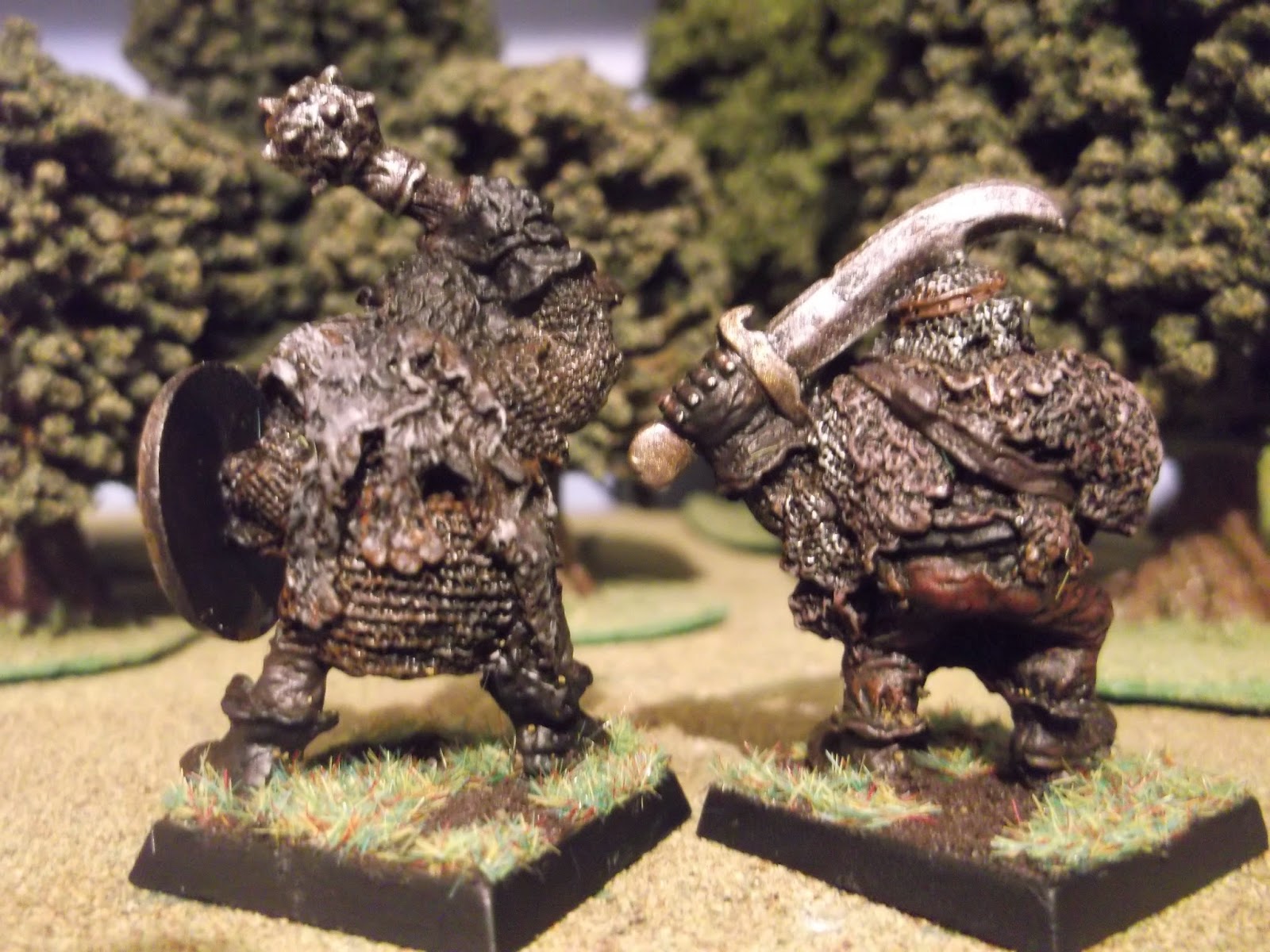 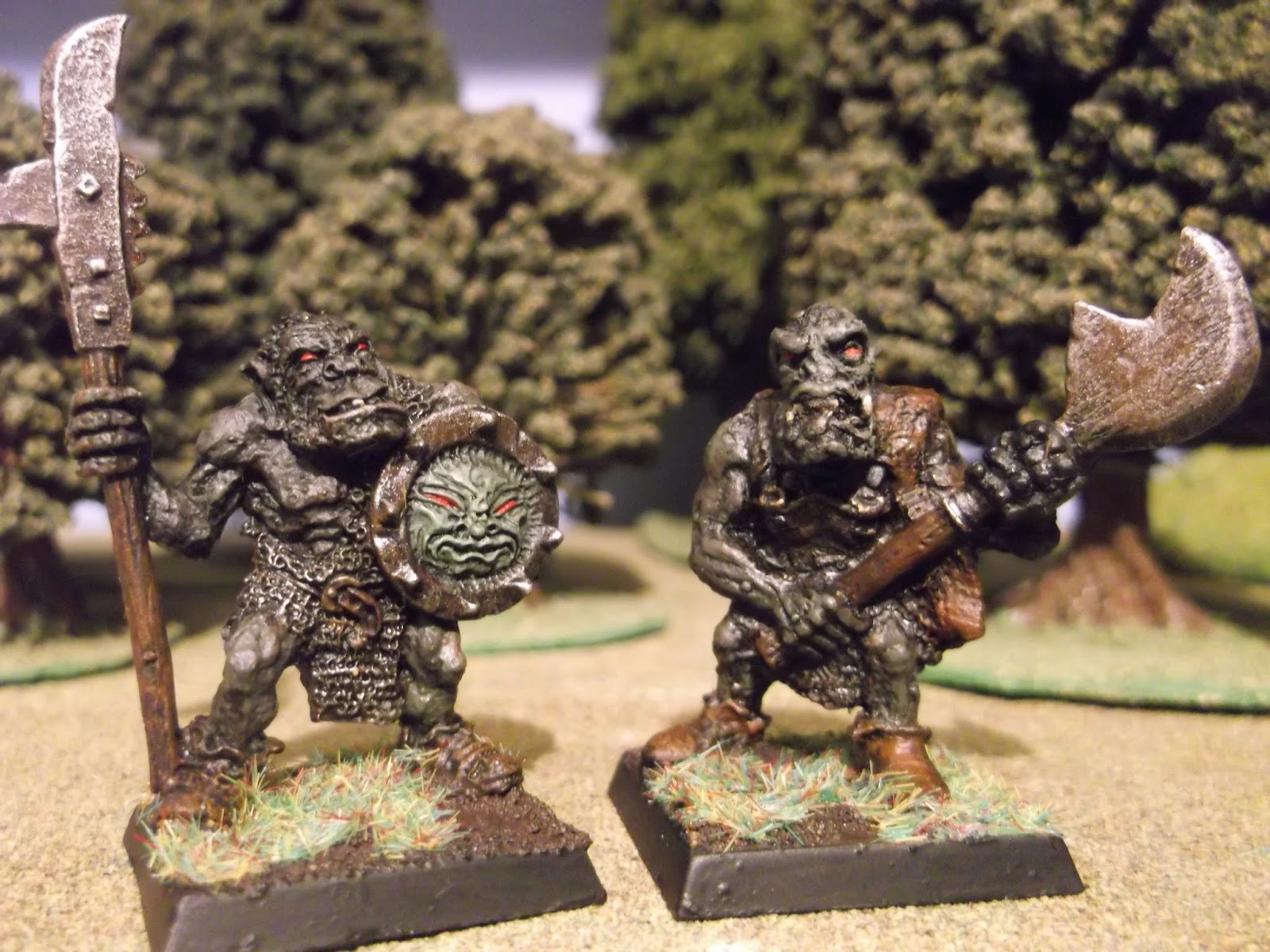 Black Orcs #11 and 12.
Black Orc #11 is one of my favourites heavy looking pole arm and face shield. 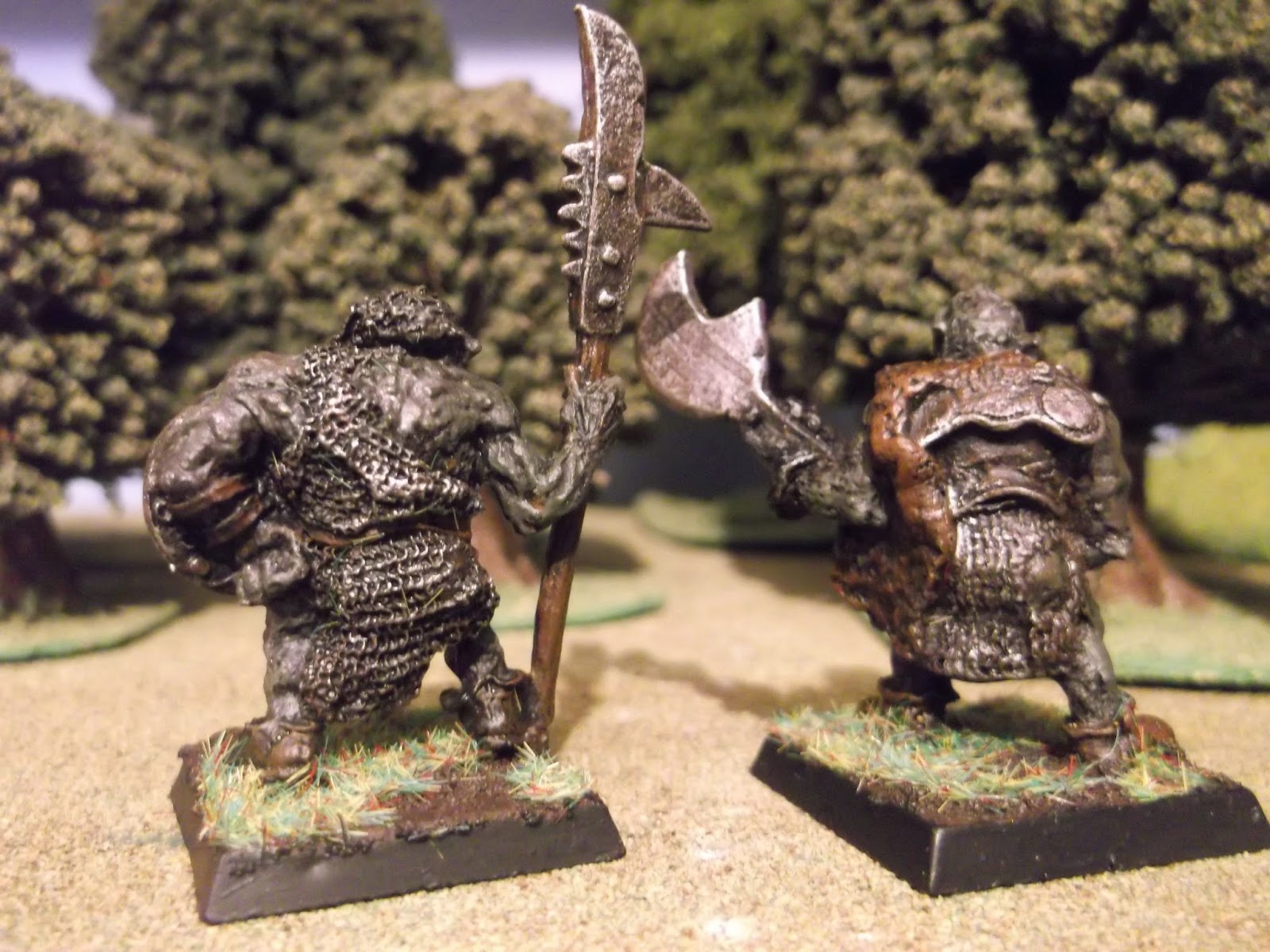 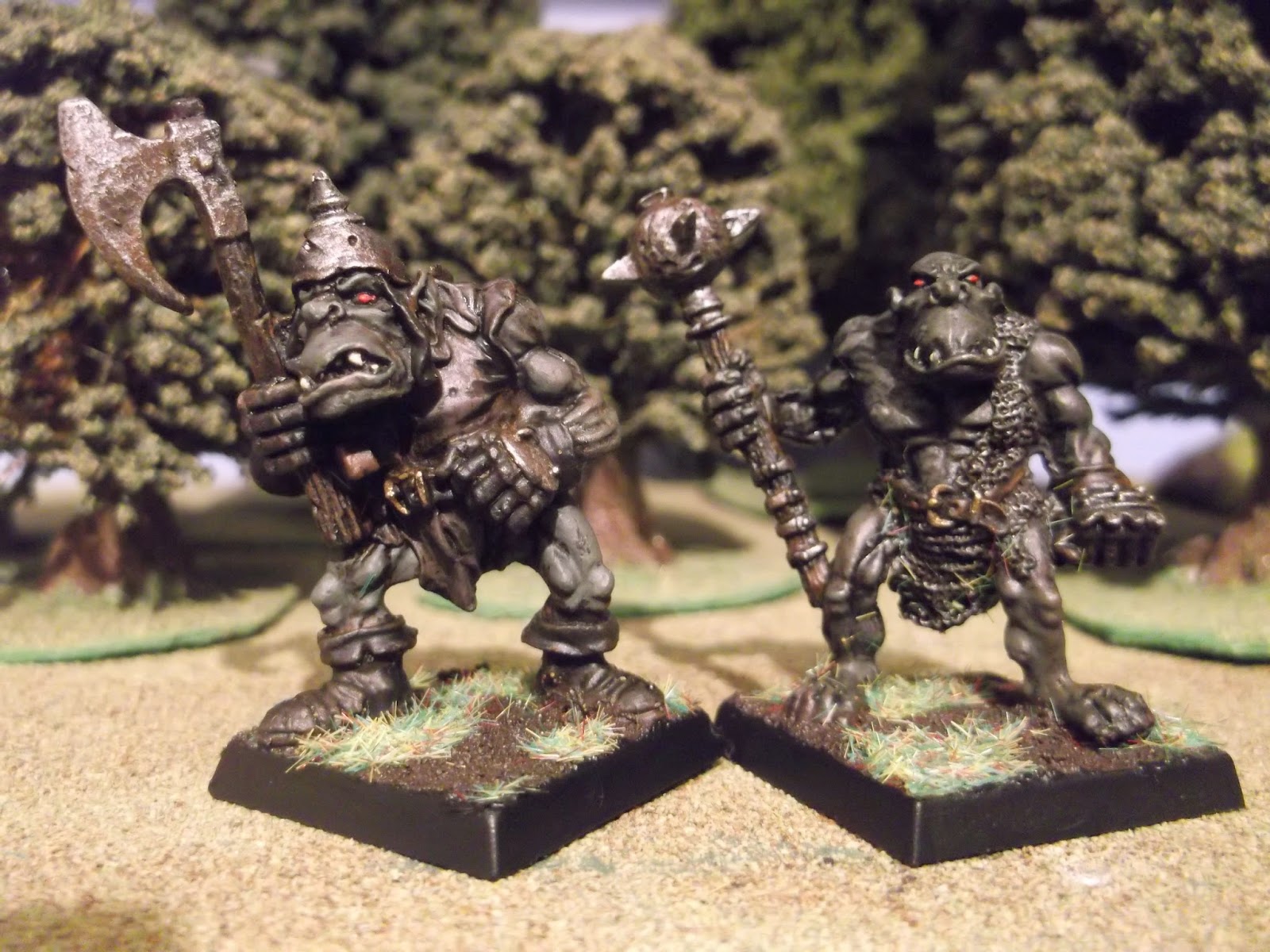 'Giant Black Orcs' from the 1991 Red Catalogue, 'Axe 1' and 'Mace 2'.
I am unsure why these miniatures were not released at the same time as the others. 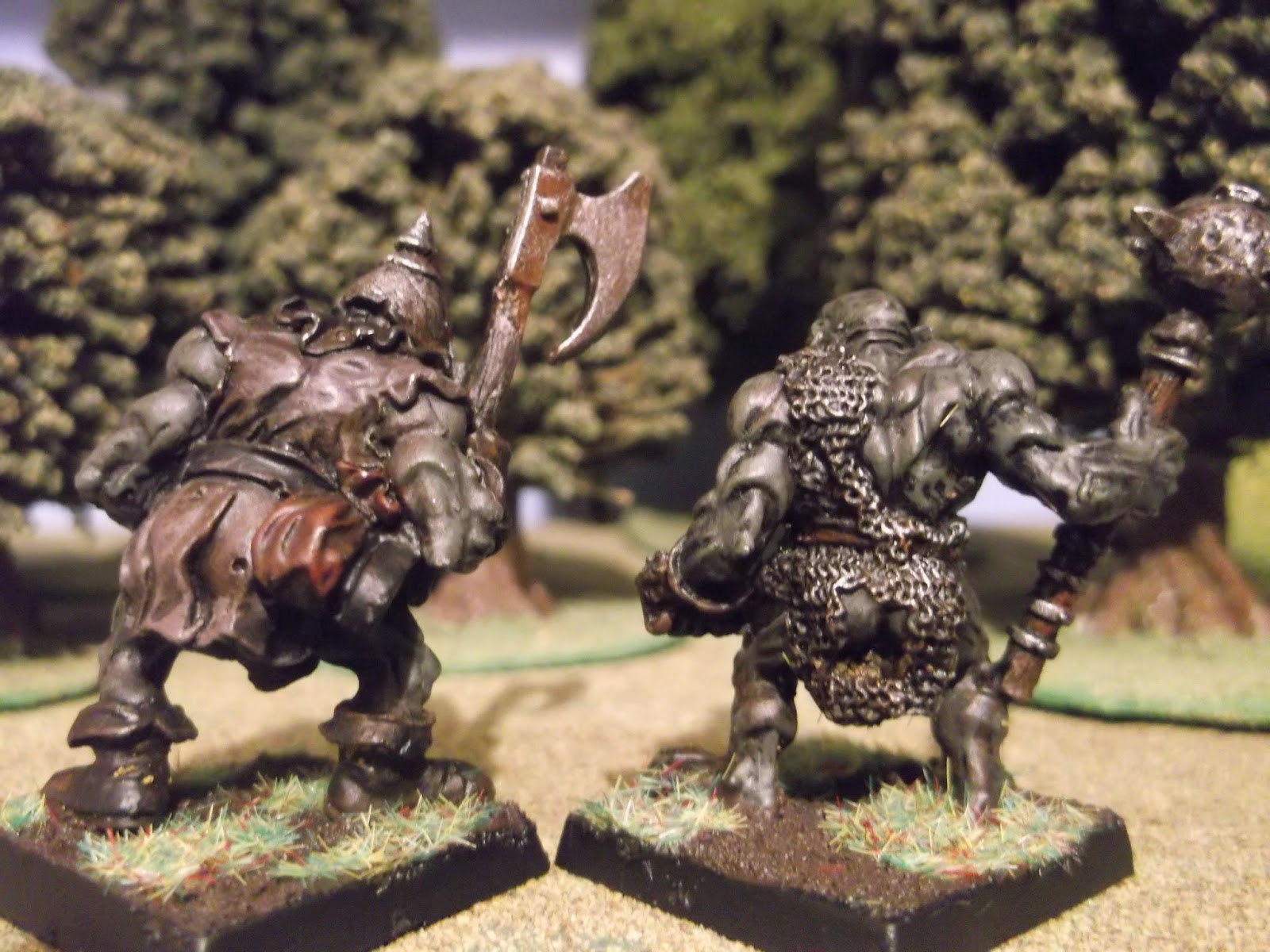 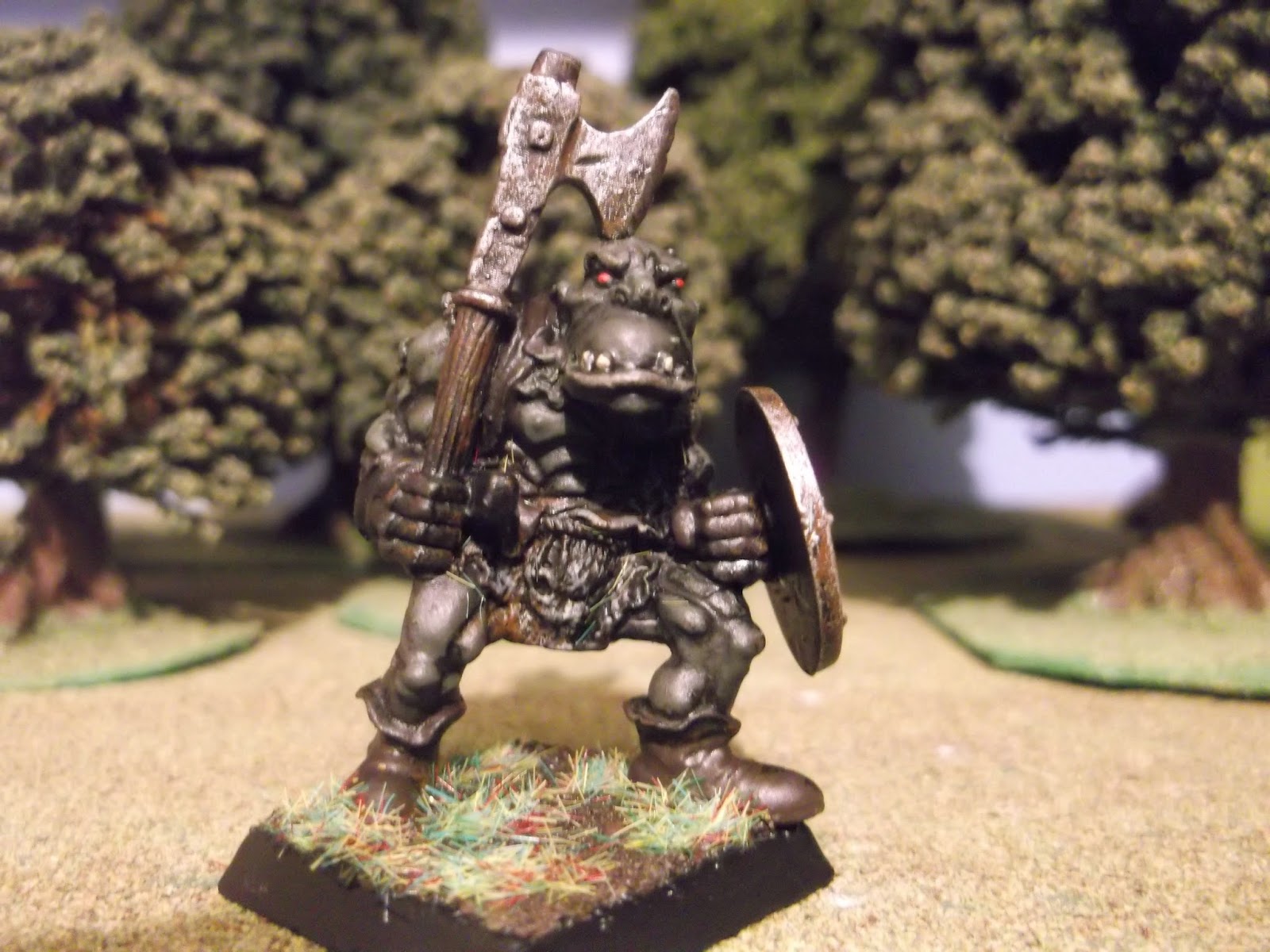 'Axe 2'.
He is again another Black Orc with a tab which allows a plastic shield to be added. 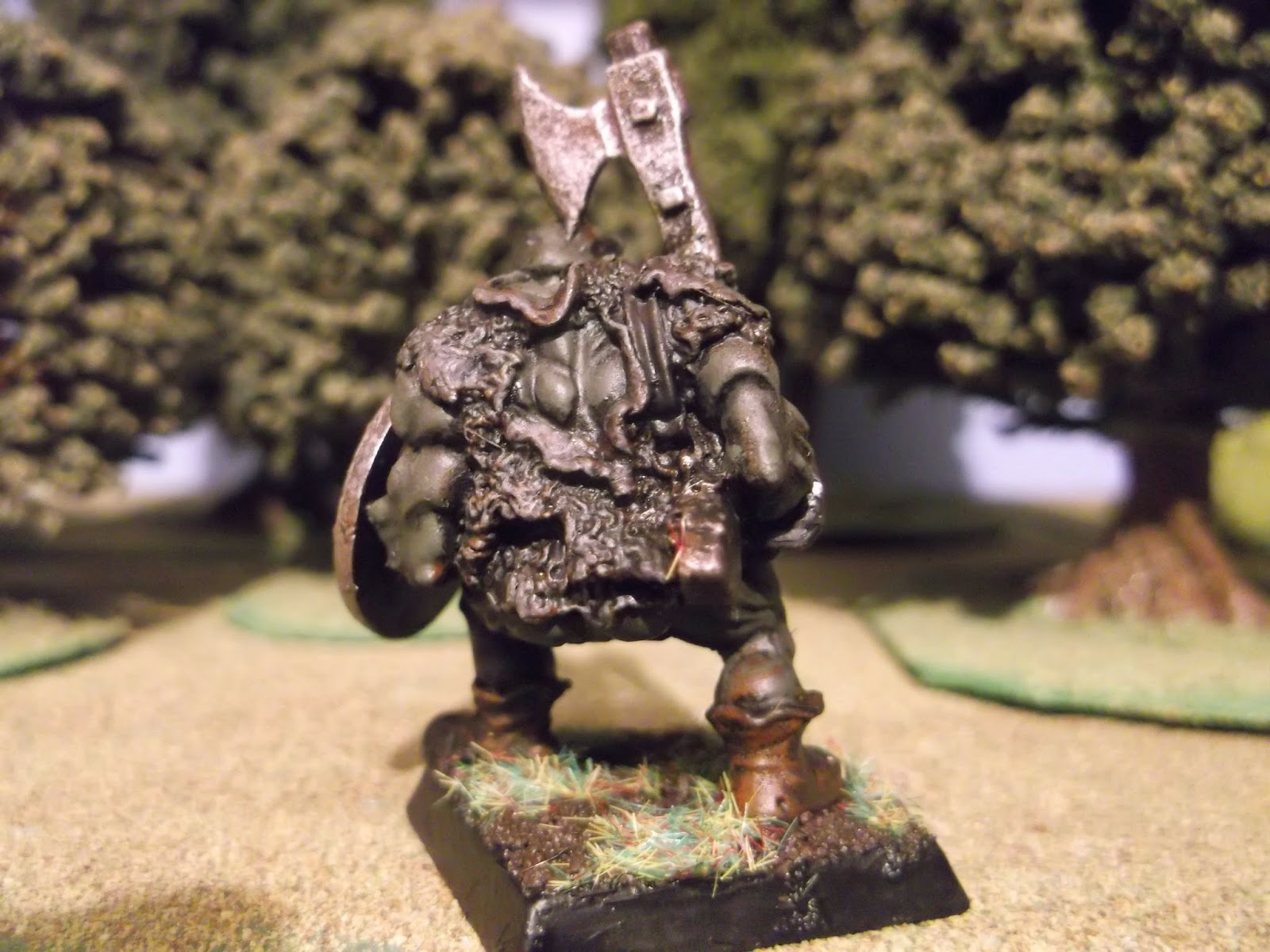 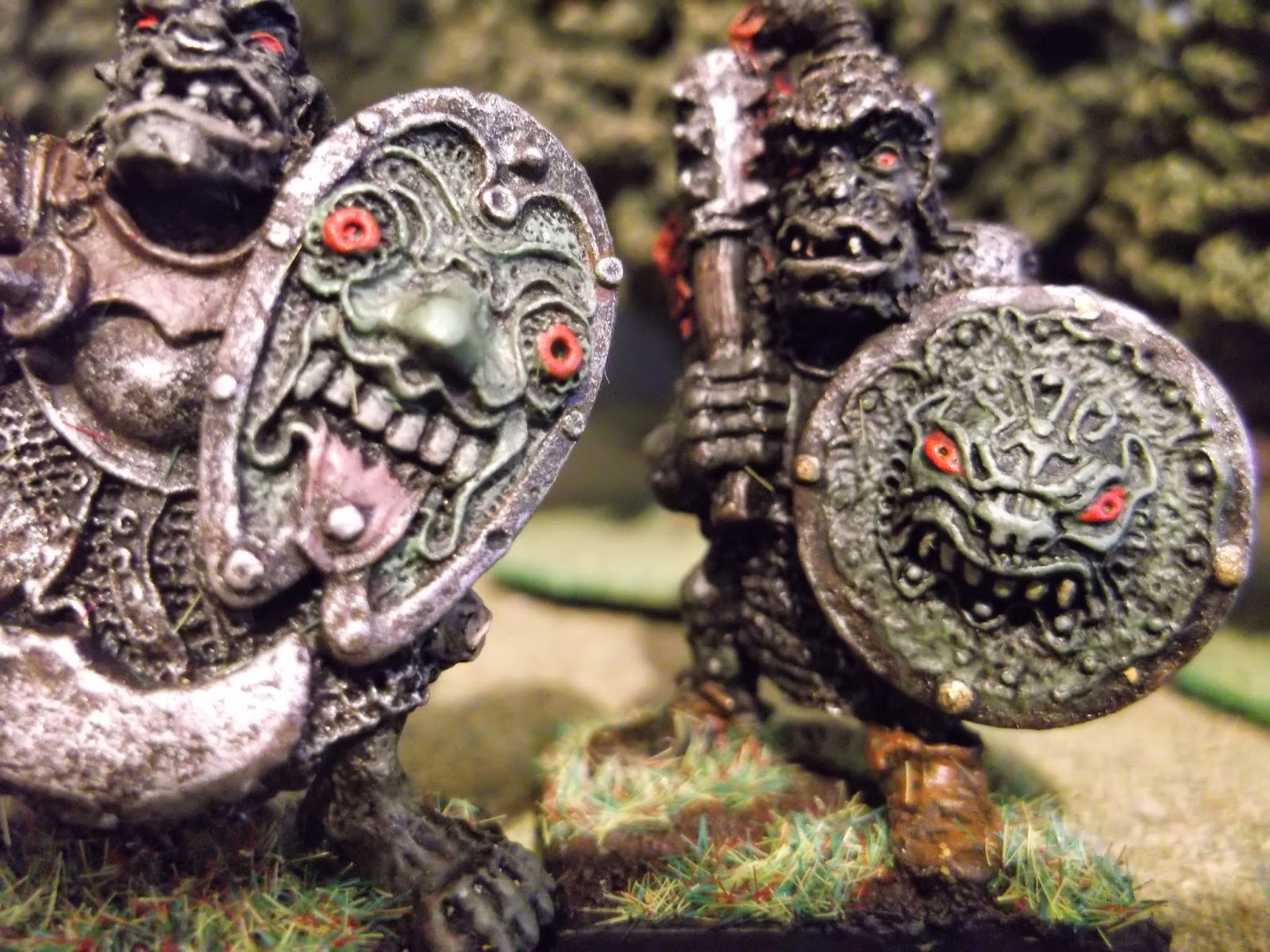 Close up of the shields of Black Orcs #2 and 3. 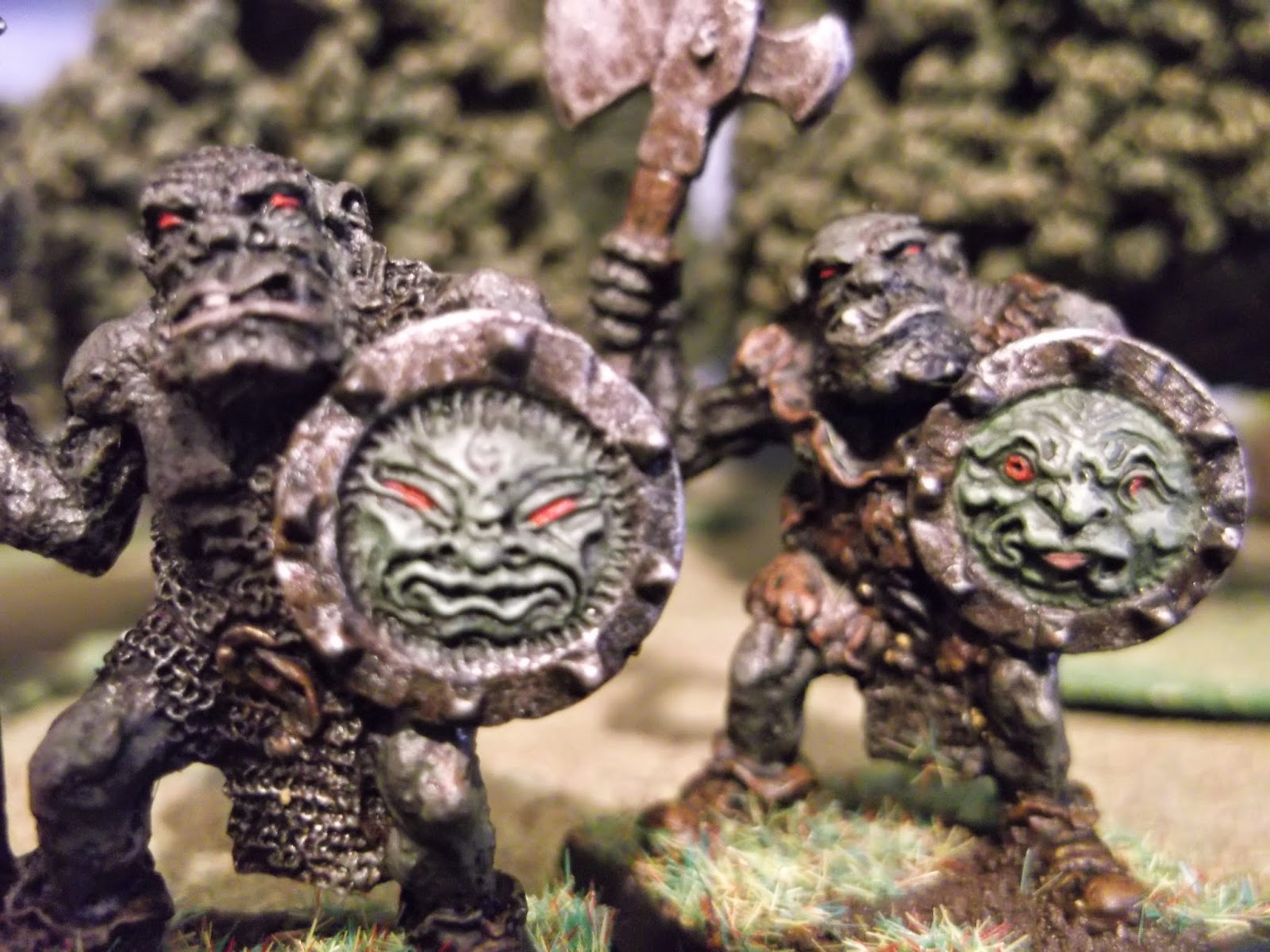 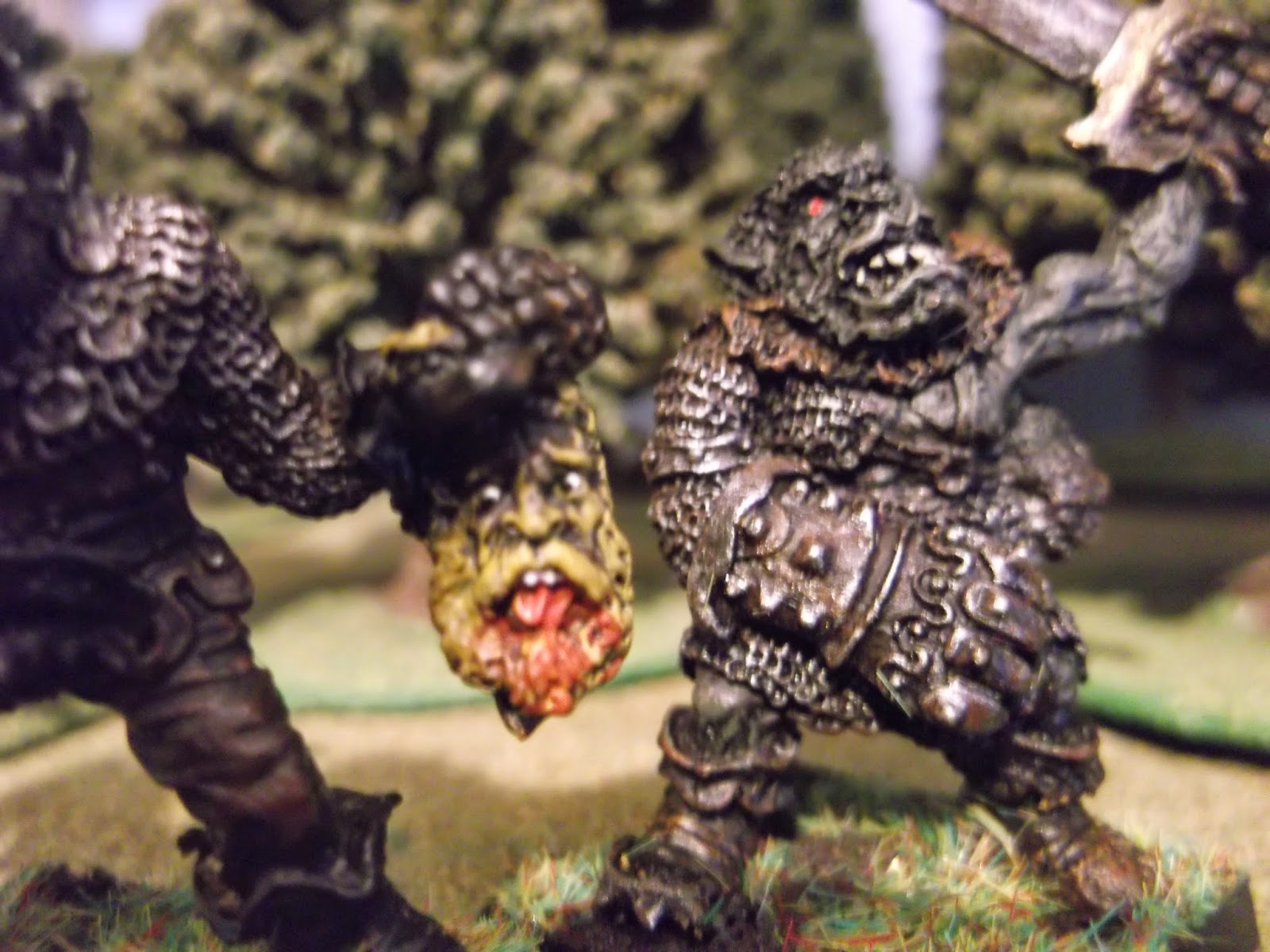 The severed head acquired by Black Orc #8, and the gauntlet of #1.


EDIT: March 2015. For a look at another set of the Iron Claw Black Orcs, painted much brighter, please check out :
http://www.oldenhammer.com/2014/12/bob-olleys-black-orcs-best-of-iron-claw.html

Not sure what the next blog update will be on.
I am getting bored with sorting out the Lords of the Rings Orcs and have a a mind to finally finsih off the fantasy Slann army off.
I do need to focus on a project as I have been remiss of late with my blog updates and painting, and so wish to get back into the habit of regular painting and blog updating.
Posted by Goblin Lee at 21:59