A bit of another late blog update this week.

Pygmies.
I've had a few Pygmies for a while, and have quite happy with them. The 70 or so little chaps I have formed a nice compact Ally Contigent for the wildly out of control Slann Army collection. I have never gamed with them, but thought they would form a nice addition to the Slann army, and provide more blowpipe armed skirmishers/scouts.

This month I got my yearly bonus from work. So I thought e-bay deserved a little look. While doing some shopping for Slann I came across someone selling 100 Pygmies. How could one resist!? :)

So I bought 100 Pygmies, plus another 12 from others sellers, to add as odd and ends (don't worry, I did'nt spend all my bonus, only a very small part of it!). This now means I have a complete Pygmy Ally Contingent under the 3rd Edition Warhammer Armies book, 143 Pygmies in total, plus a couple of dozen spare. The spare ones will form a minor second Ally Contingent.

I won't get around to painting the Pygmies for a while as I am concentrating on painting Slann, and I am really enjoying paint the Slann again. I have based most of the Pygmies as the person from whom I bought them (Peter Acs, check out his blog here: http://www.lead-rising.com/ )  informed me that the previous owner had trimmed off a lot of the tabs, and so had to re-based them with a glue and greenstuff. 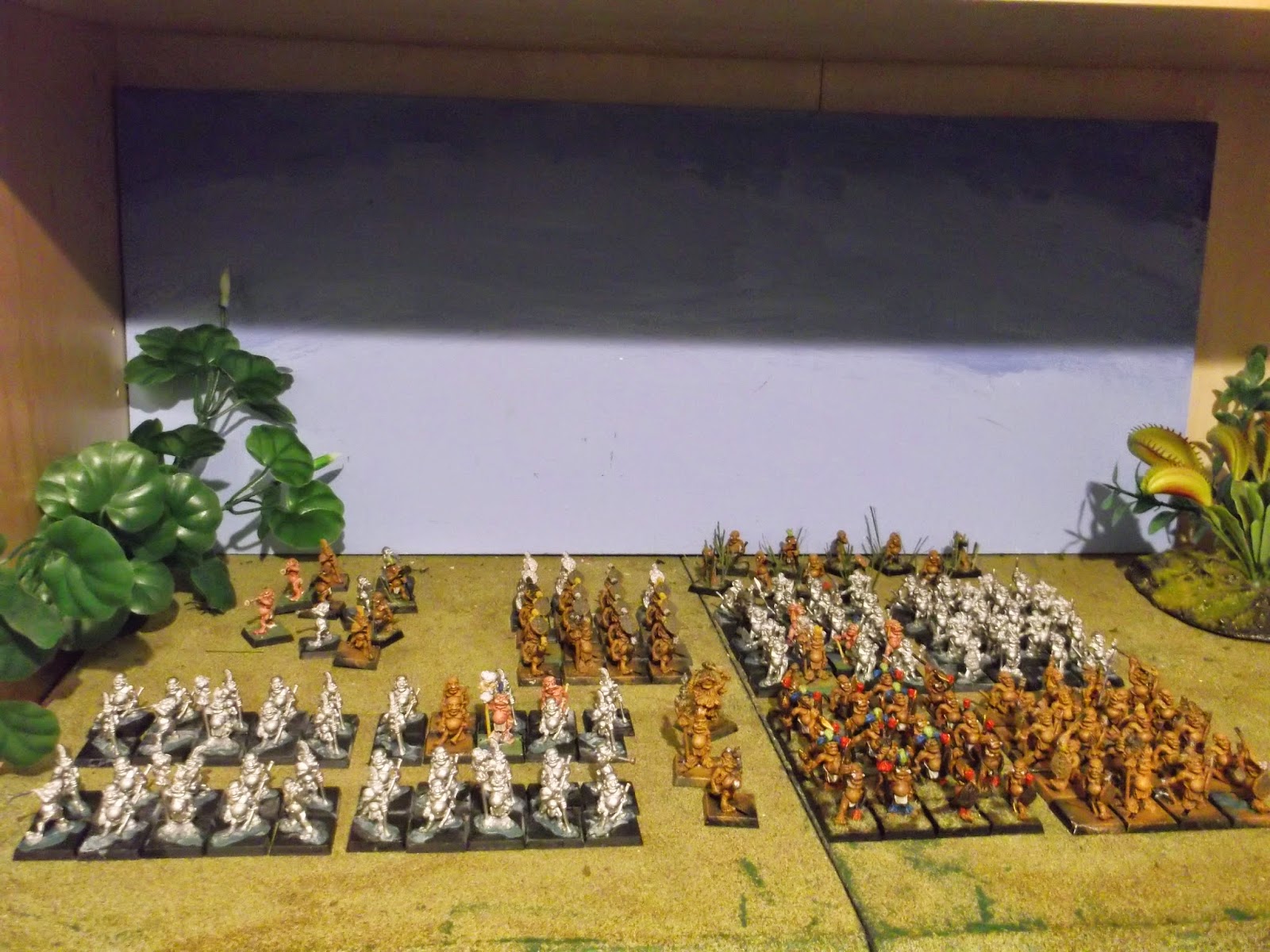 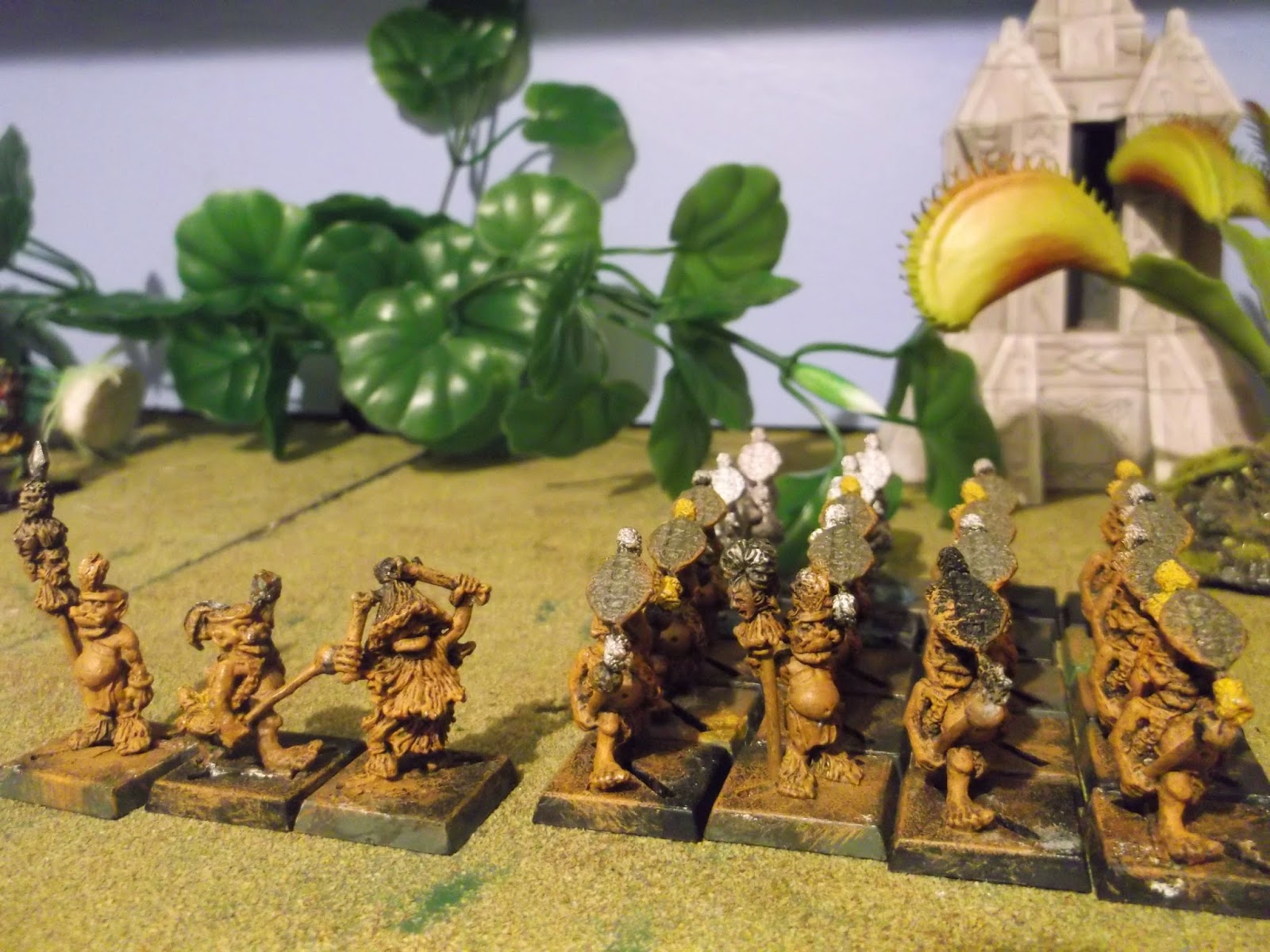 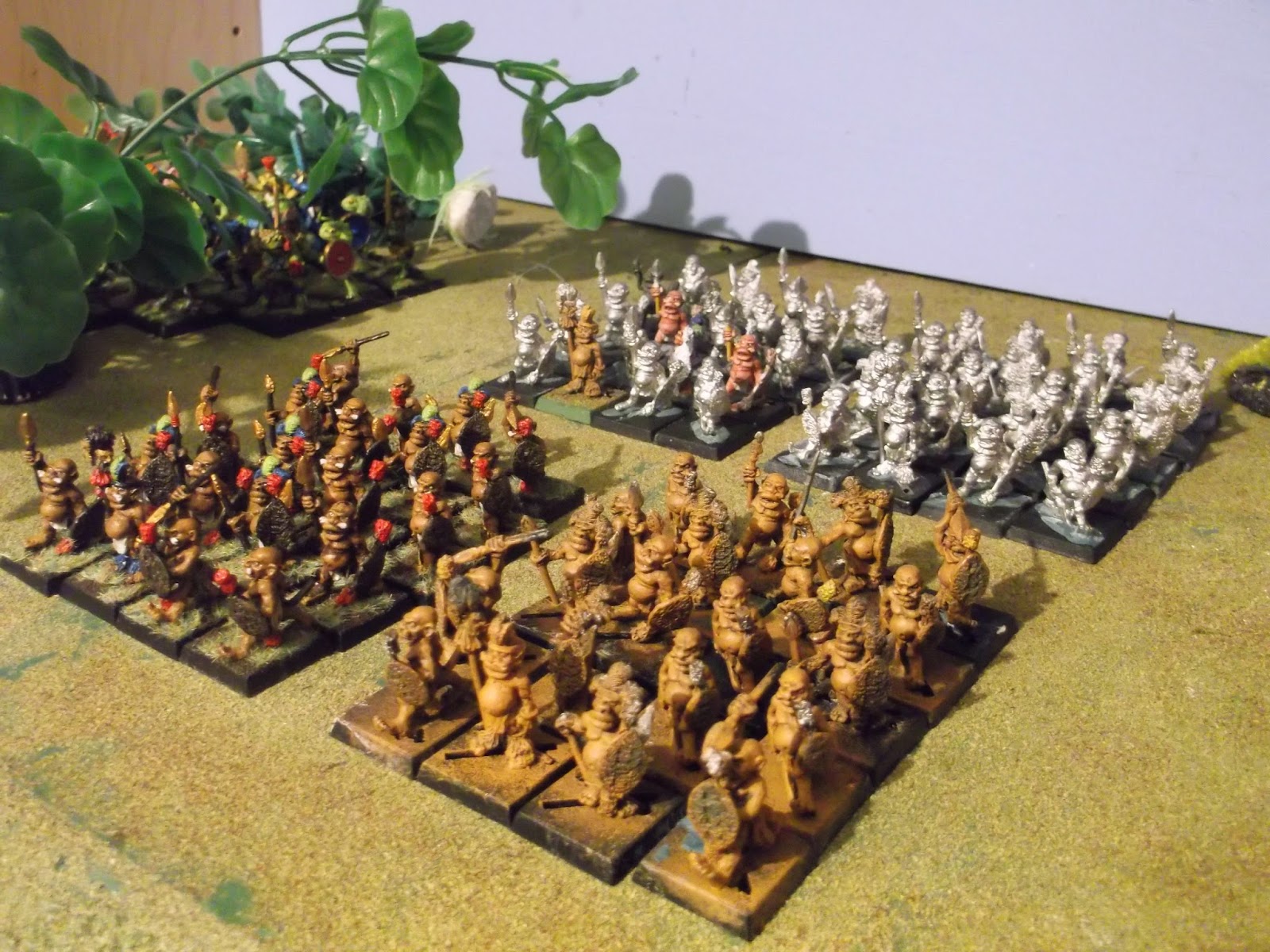 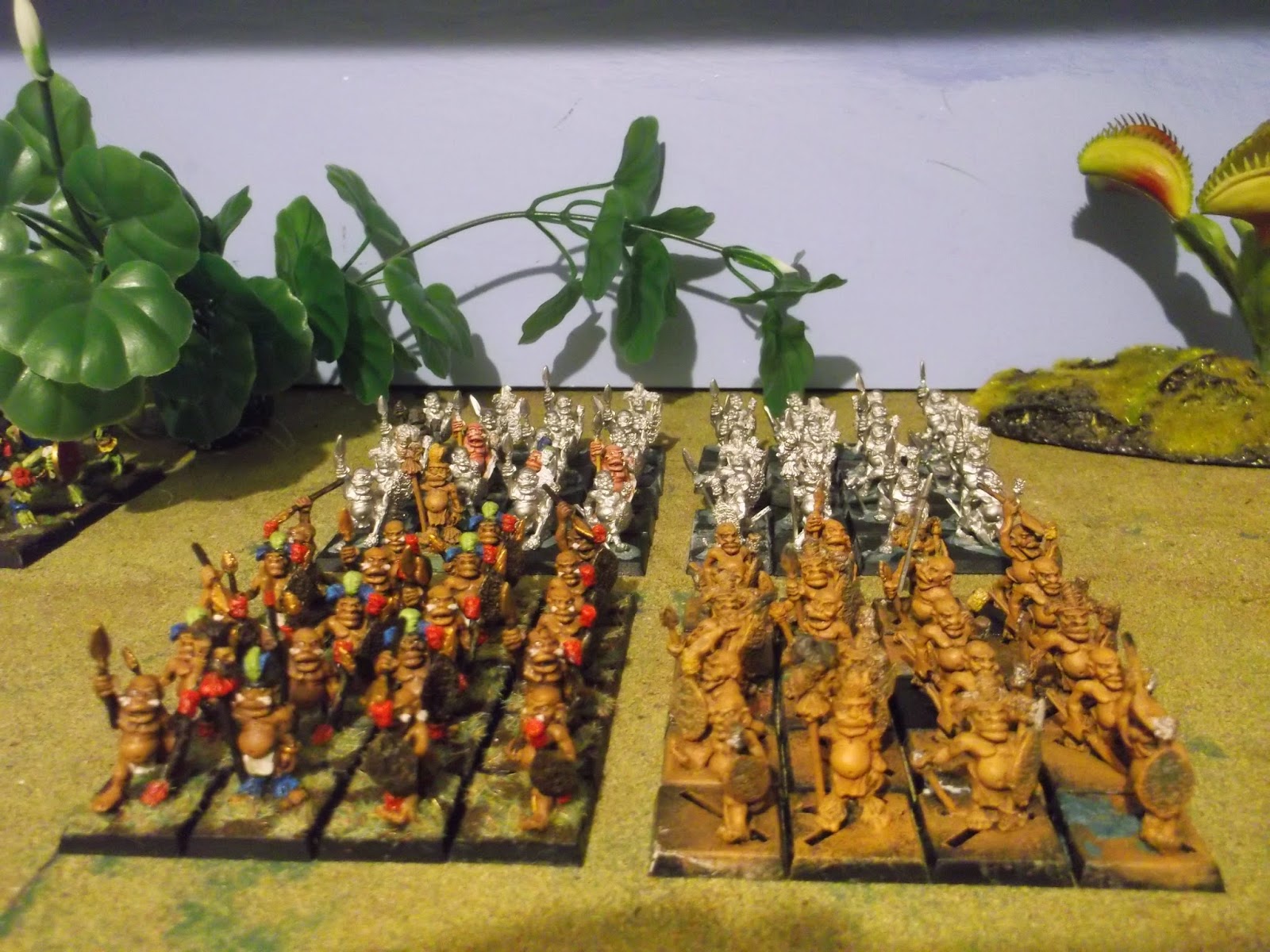 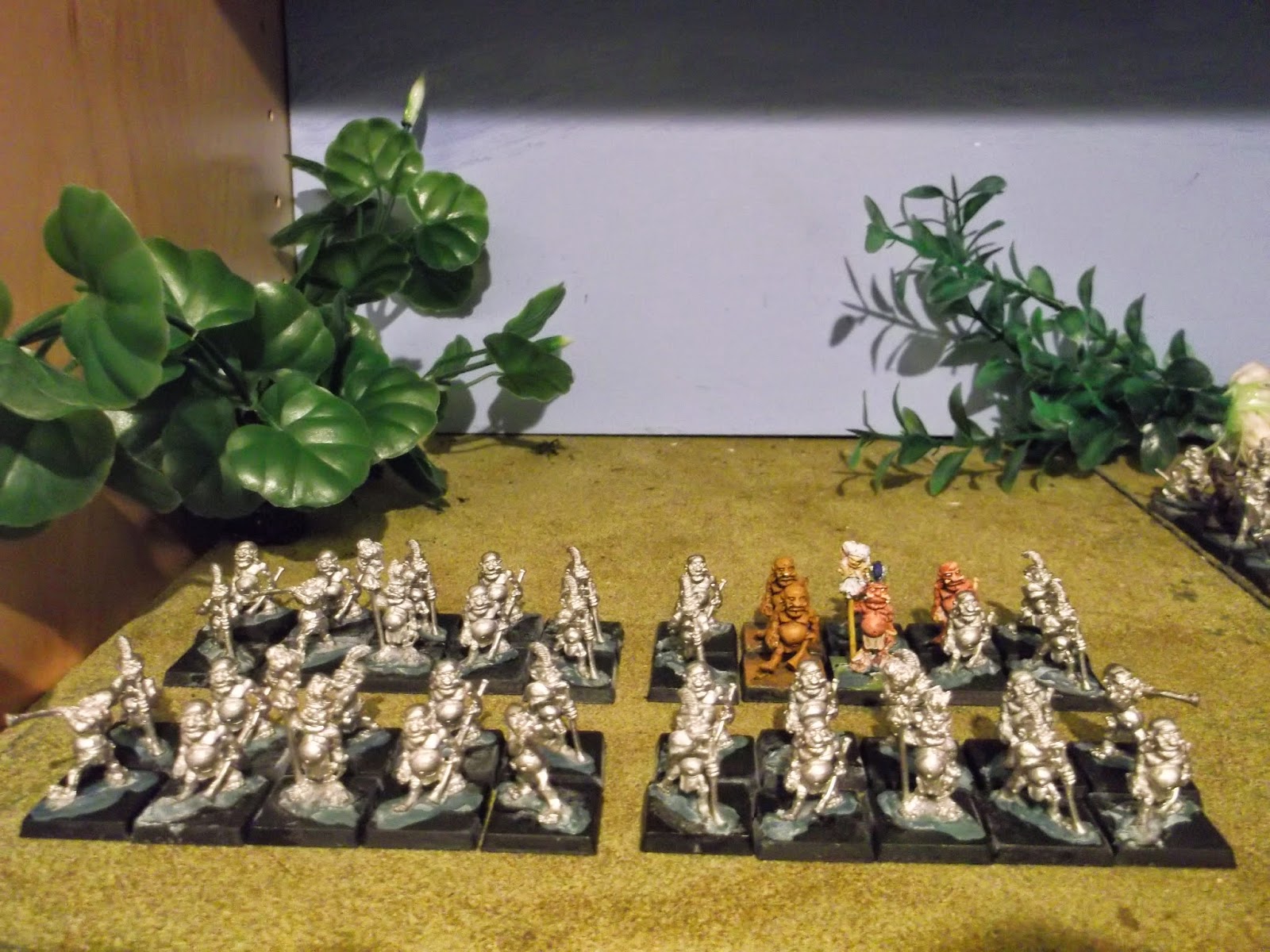 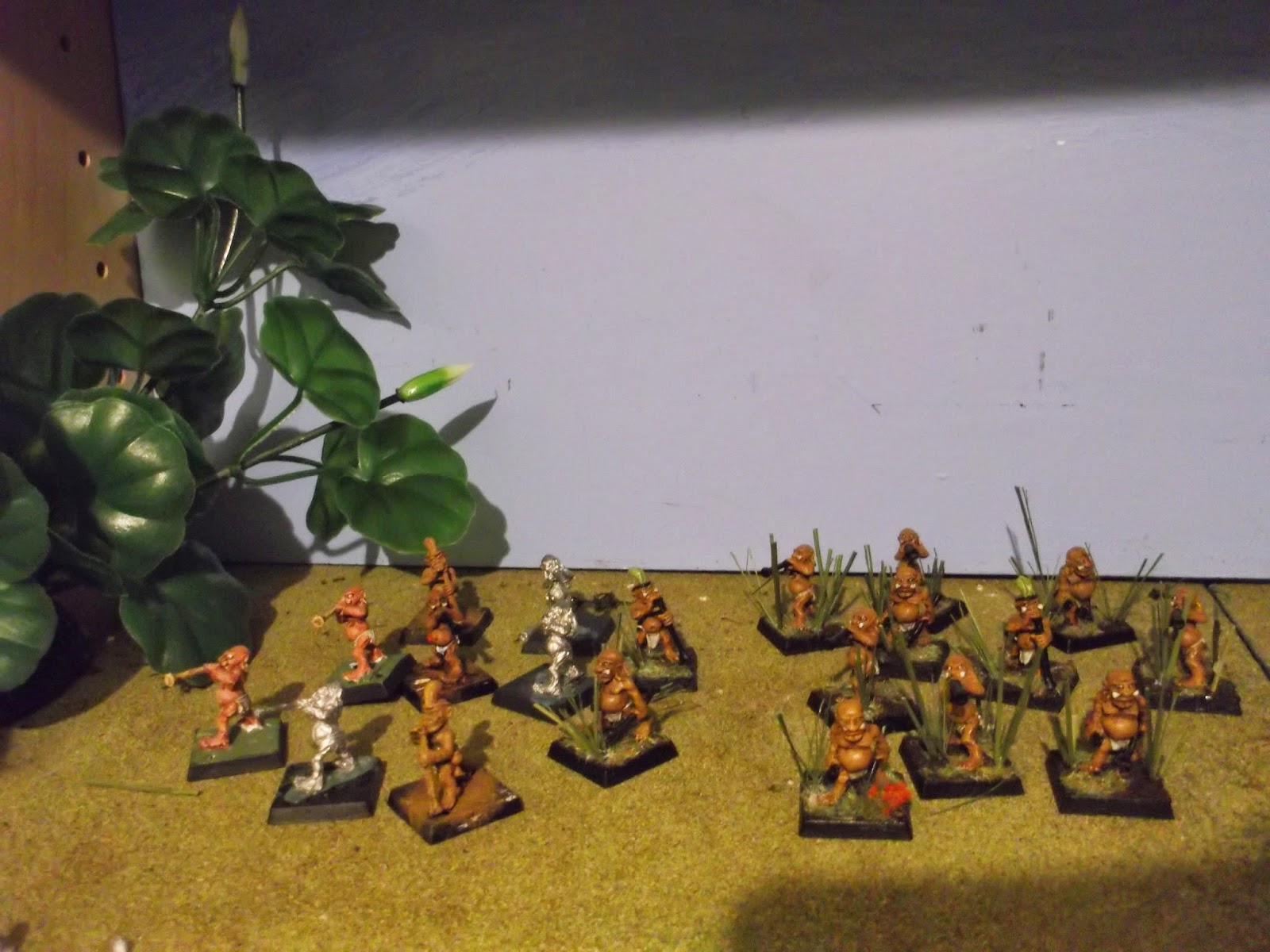 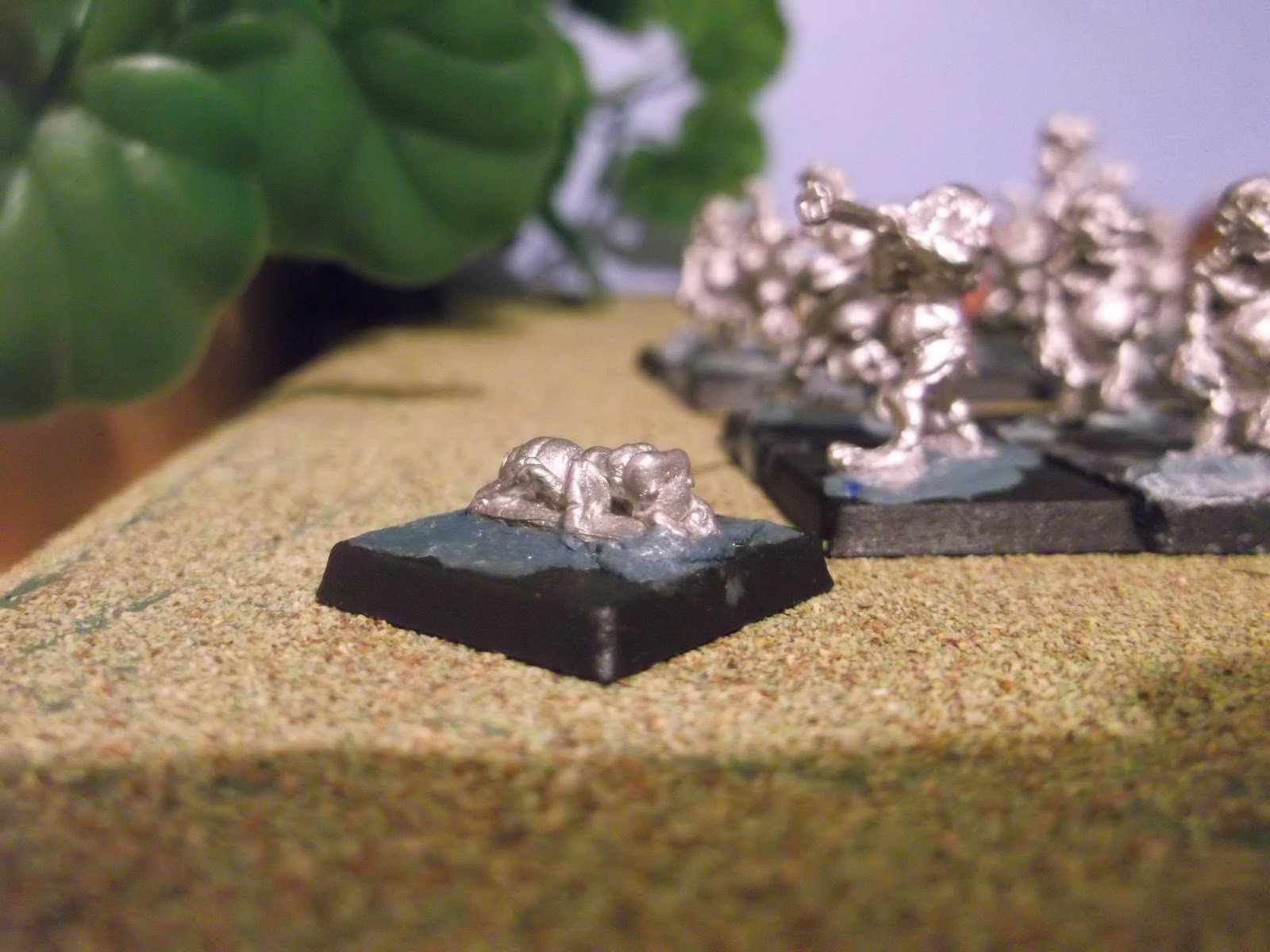 1980's Citadel FS45-1 Large Ant.
I might use this a unit filler for the second group of Pygmies. 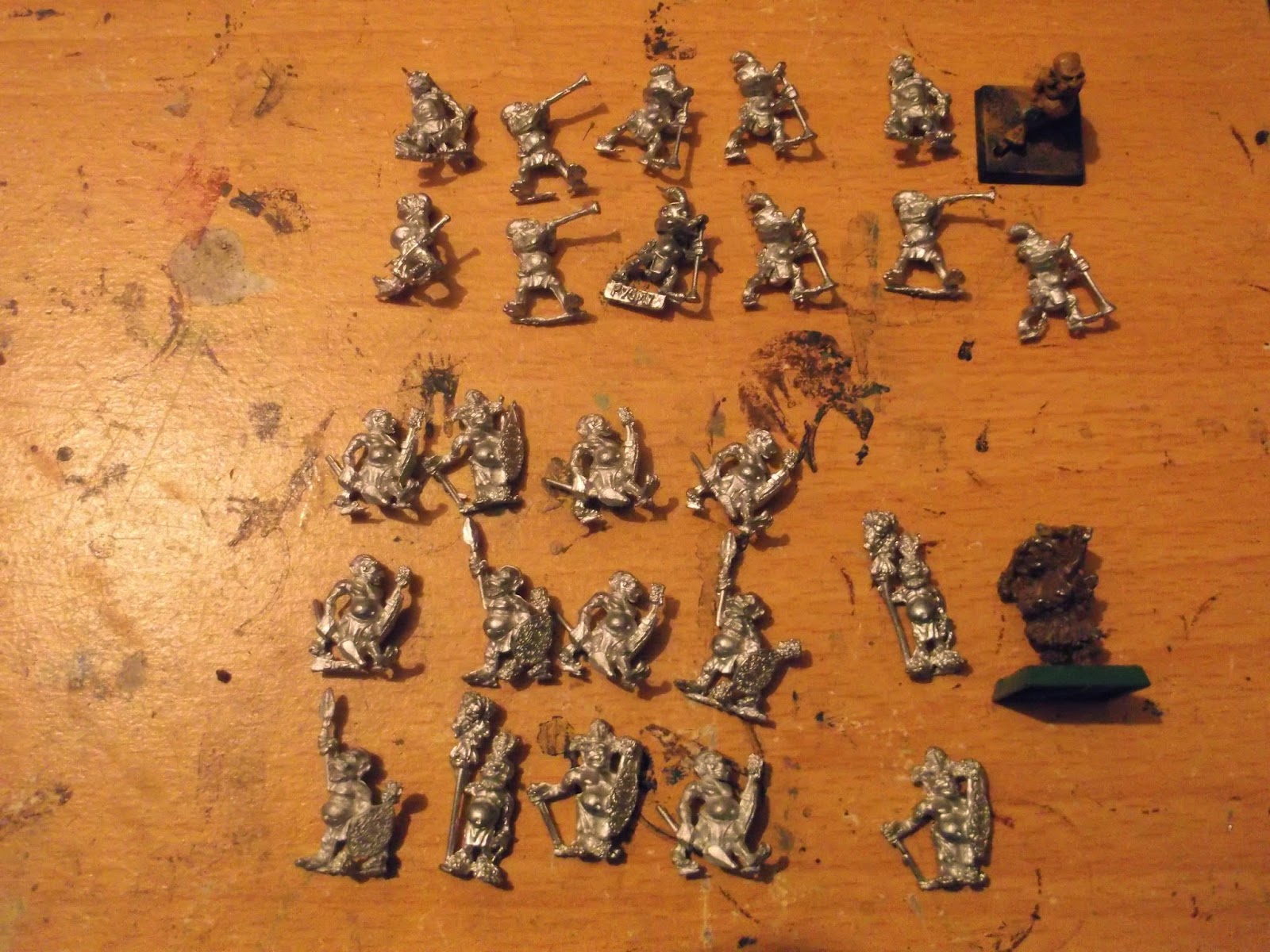 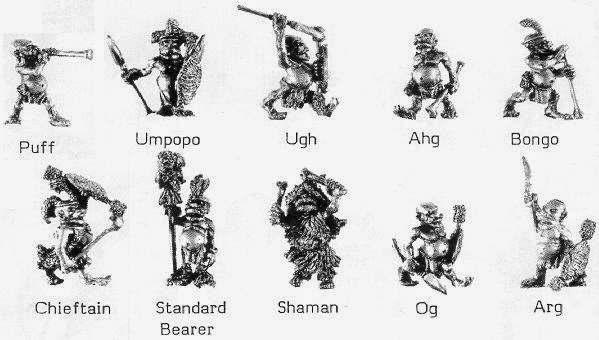 The Citadel C27 Pygmies.
They were slotta based, made in about 1984, were designed by Alan and Michael Perry, and were still available in blister packs for a number of years during the later 1980's. I don't seem to recall them around much post 1990.
They were designed to fit into the Lustrian background as tribal cannibal types which took pot-shots at Slann and other more civilised passers by. In White Dwarf #100 they were given a expanded background as descendants of marooned Space farers, in the Warhammer Fantasy Roleplay scenario 'Floating Gardens of Bahb-Elon'.
The overall look of the weapons and shields is suggestive of the Zulus, and given the influence of the film 'Zulu' and the historical interest of the Citadel design team of the time, it isn't unlikey.
I am not going to go into the debate on the racial design of the Pygmies. Anyone who has seen the range is well aware of the caricature nature of them.  Needless to say I consider the Pygmies in Lustria to be more South American rather than African, and so I have painted the flesh tone to match.
As for the range, they are fine for what they are and for the time in which they were made, a range of 1980's minatures designed as a cliched group of tribal allies for the Slann/Lustria. Personally the faces always reminded me more of the giant Olmec heads, and are in keeping with the pseudo-Meso American vibe.
There was an interesting discussion sometime ago on the subject of Warhammer Pygmies on the realm of zhu blog:
http://realmofzhu.blogspot.co.uk/2013/07/lstri-pygmies.html#comment-form 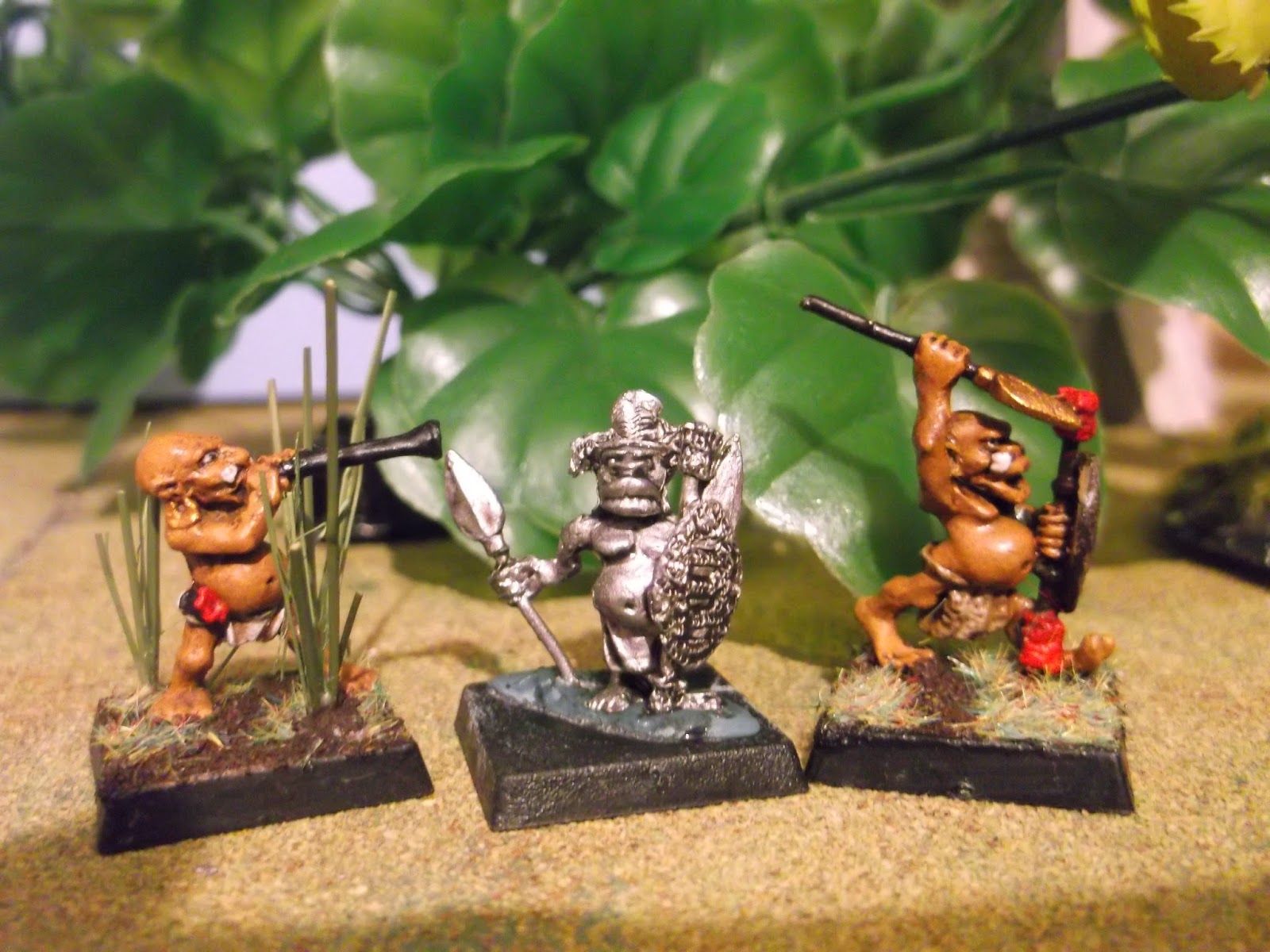 Puff, Umpopo, and Ugh.
The Umpopo miniature is very, very fragile where the spear head meets the hand, and are well known for breaking off. Most of mine break,  and have either been repaired or had the spear replaced with a different spear similar to the old one. 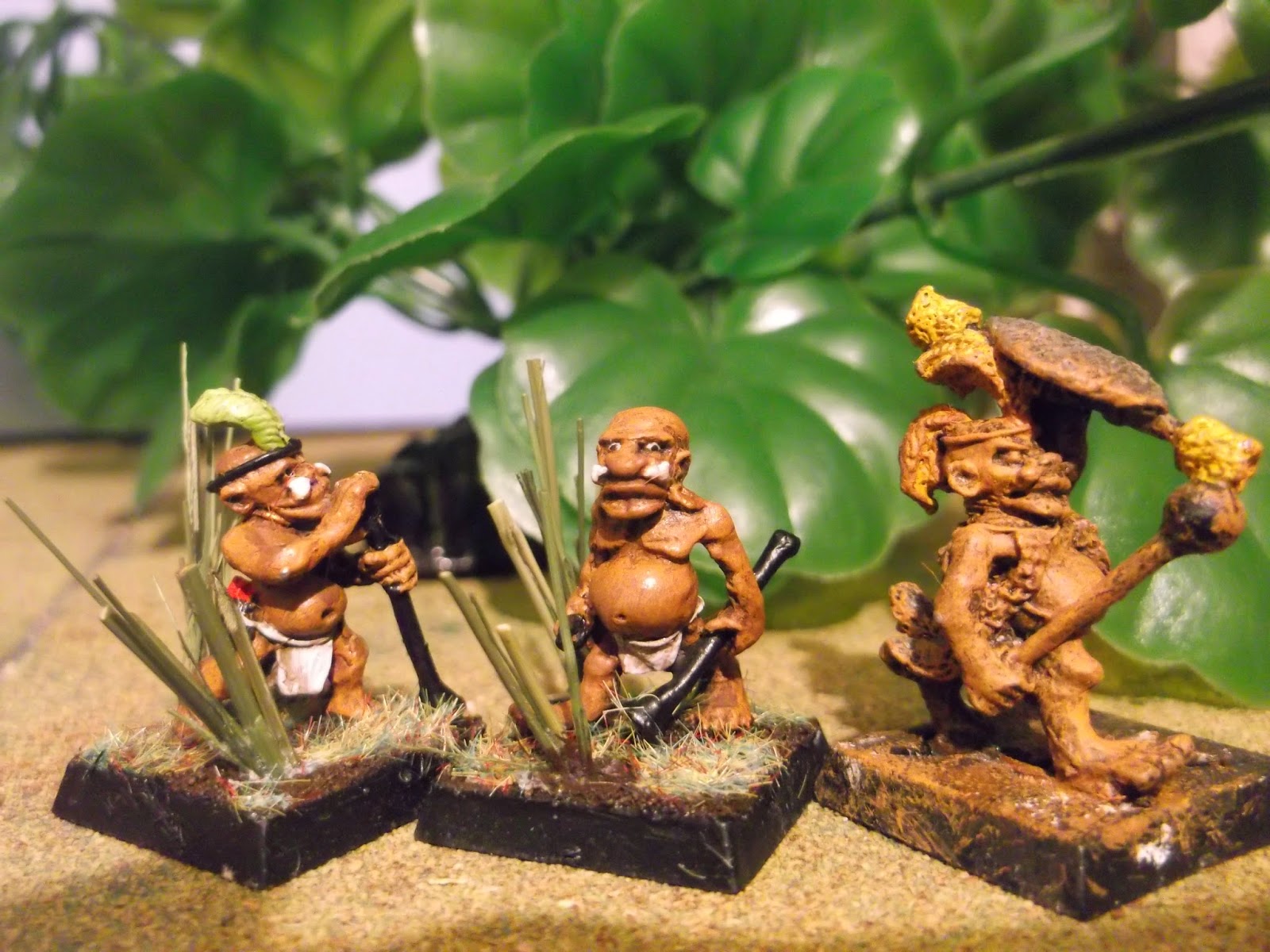 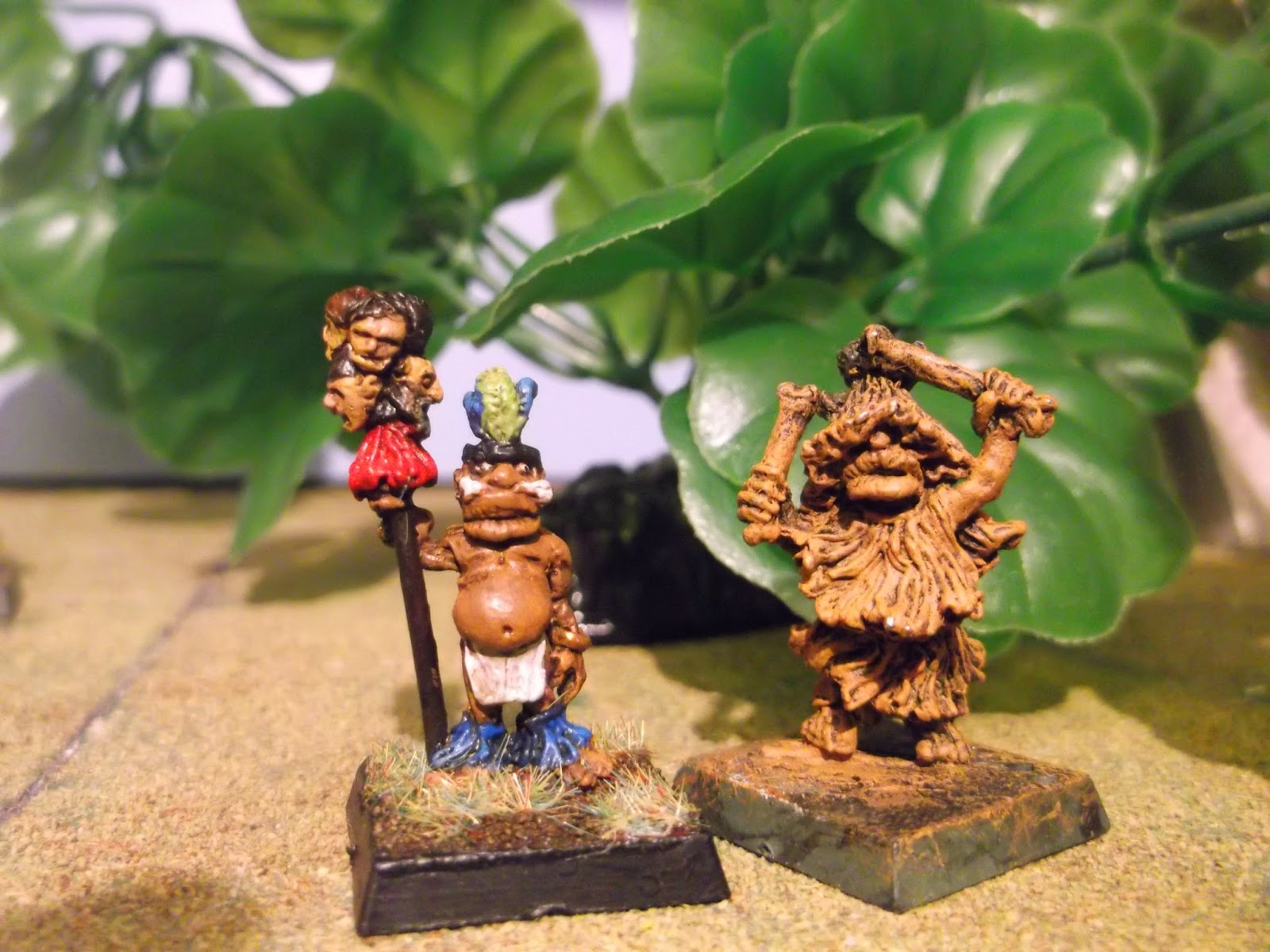 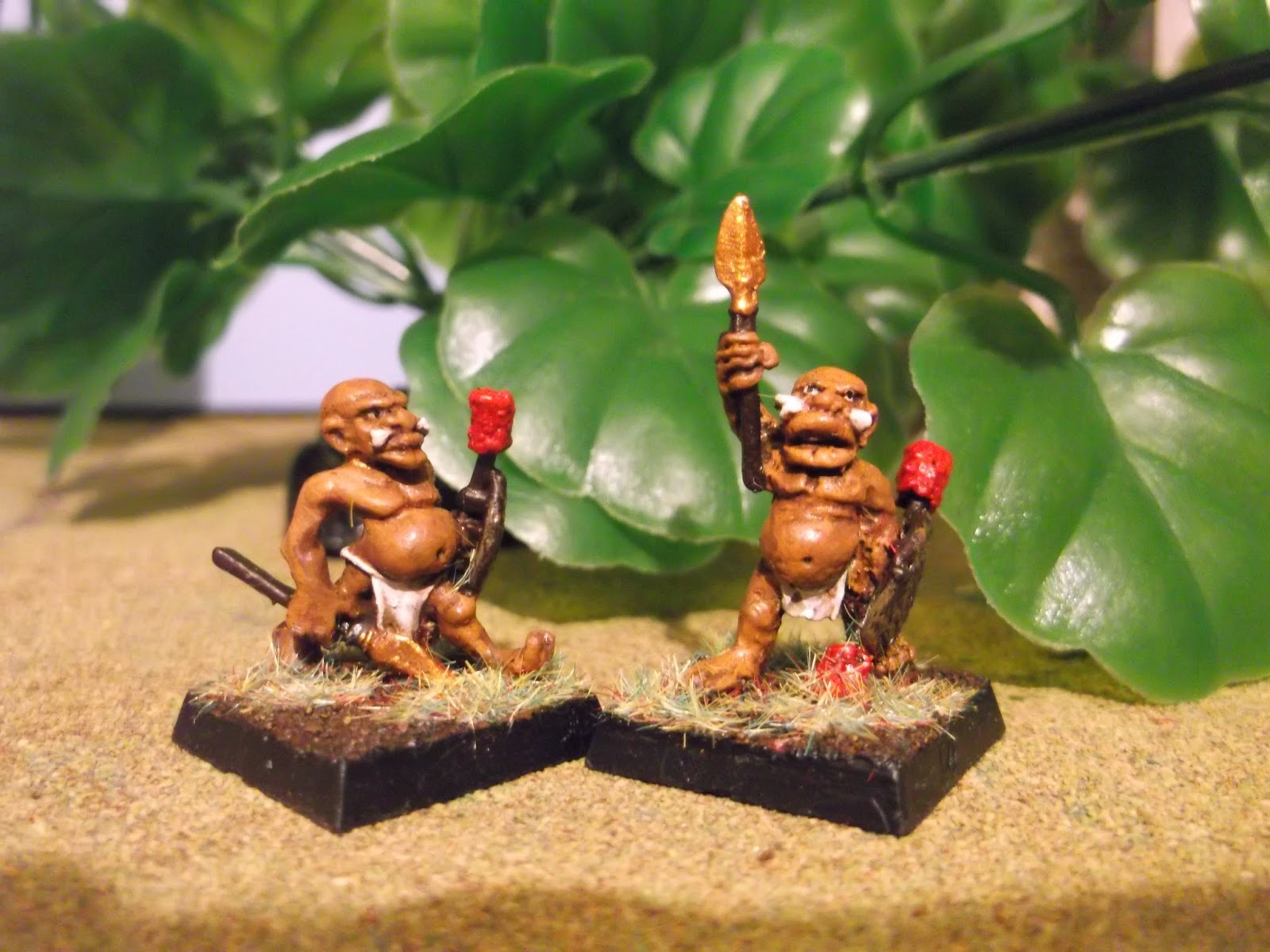 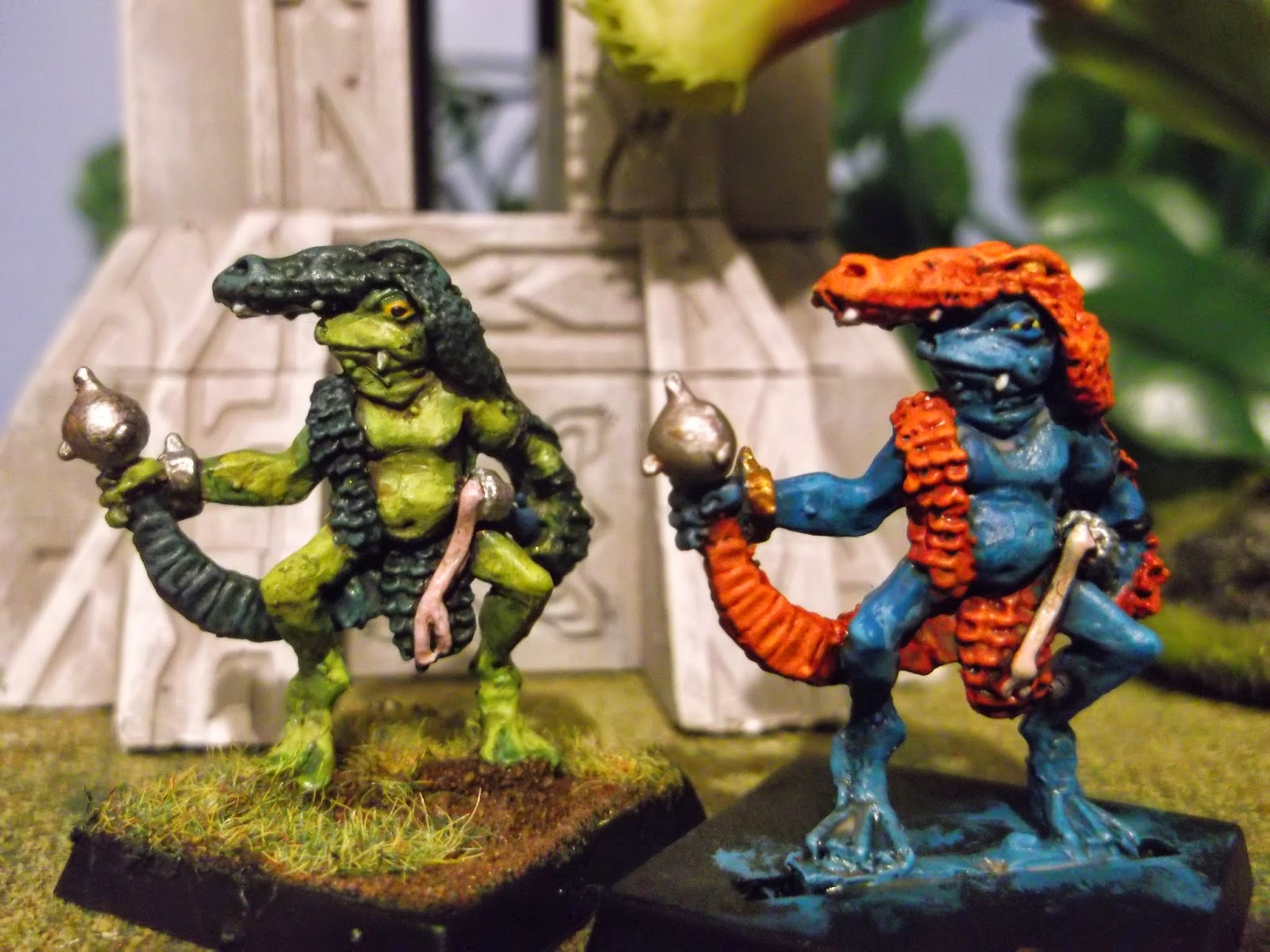 Alligator Warriors.
I had two spare of these miniatures and so reassigned these two to the Spawn bands. With that, I could paint them in non-uniform colours and give them more of an individual feel to them. 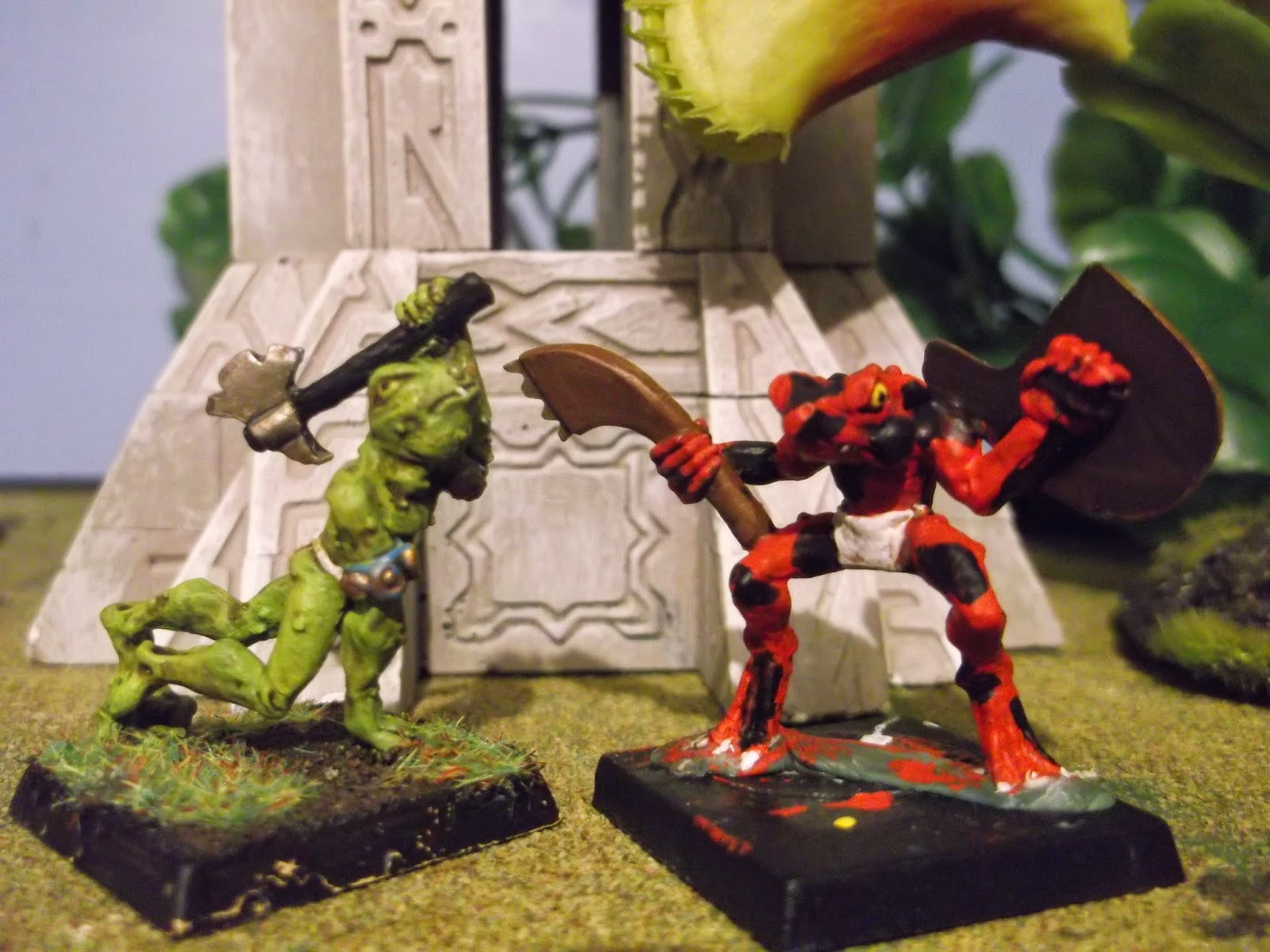 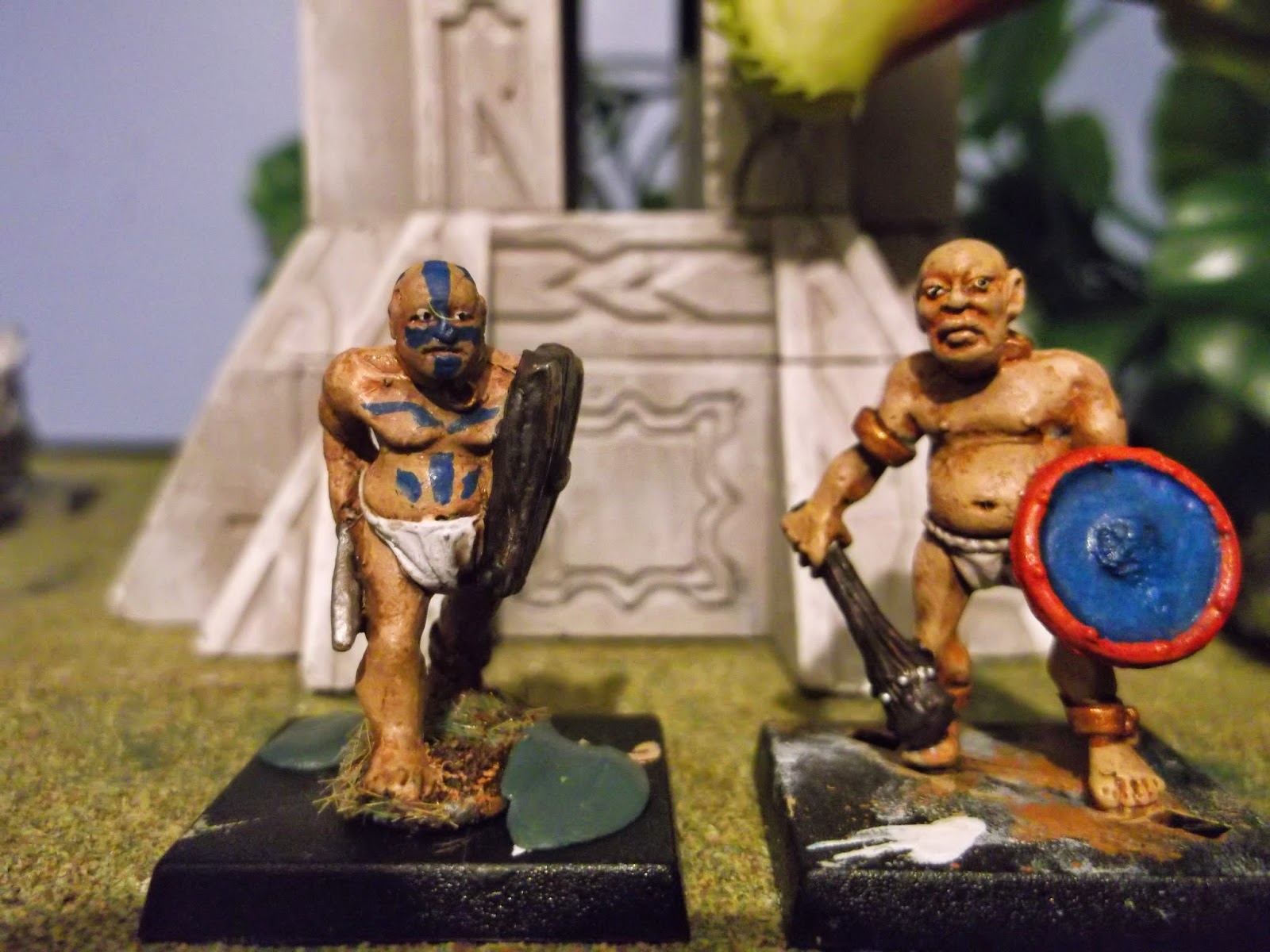 Lobotmised human Slaves.
Left is solid based slave, right is slotta slave from the 1987 release.
I am going to put these in theSpwan Band units as unit fillers. 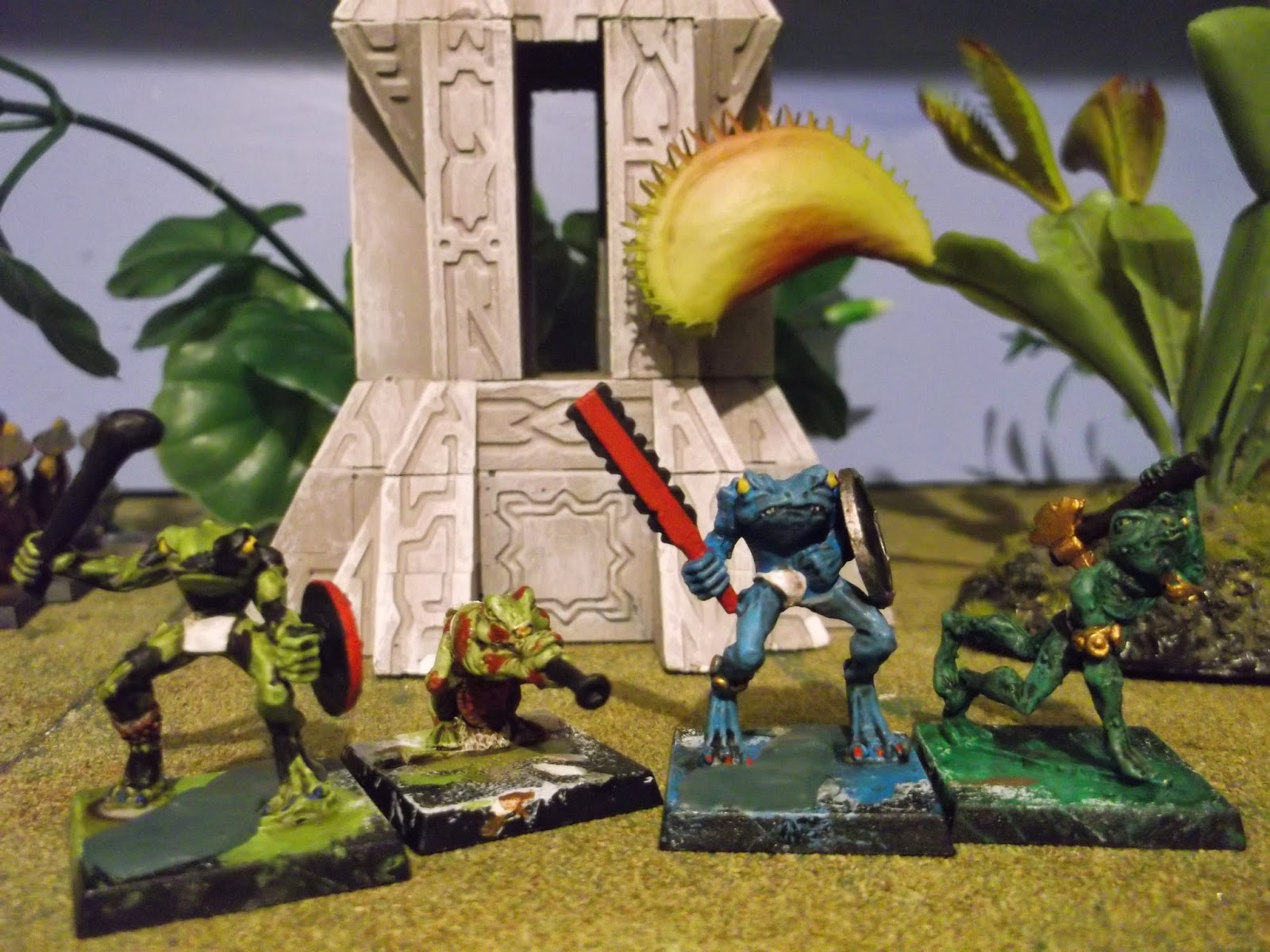 Four Slann replacements for Jungle Braves/Scout units.
I removed the converted musicans from the Jungle Brave as I did'nt see the point in having musicans in the units. So I replaced them with uncoverted miniatures. The blowpiper is a replacement for a miniature in a scout who had an axe and did'nt have a blowpipe.
Left to right: Naxlatl, Akabylk, Mixtecas, and Lep'nluni. 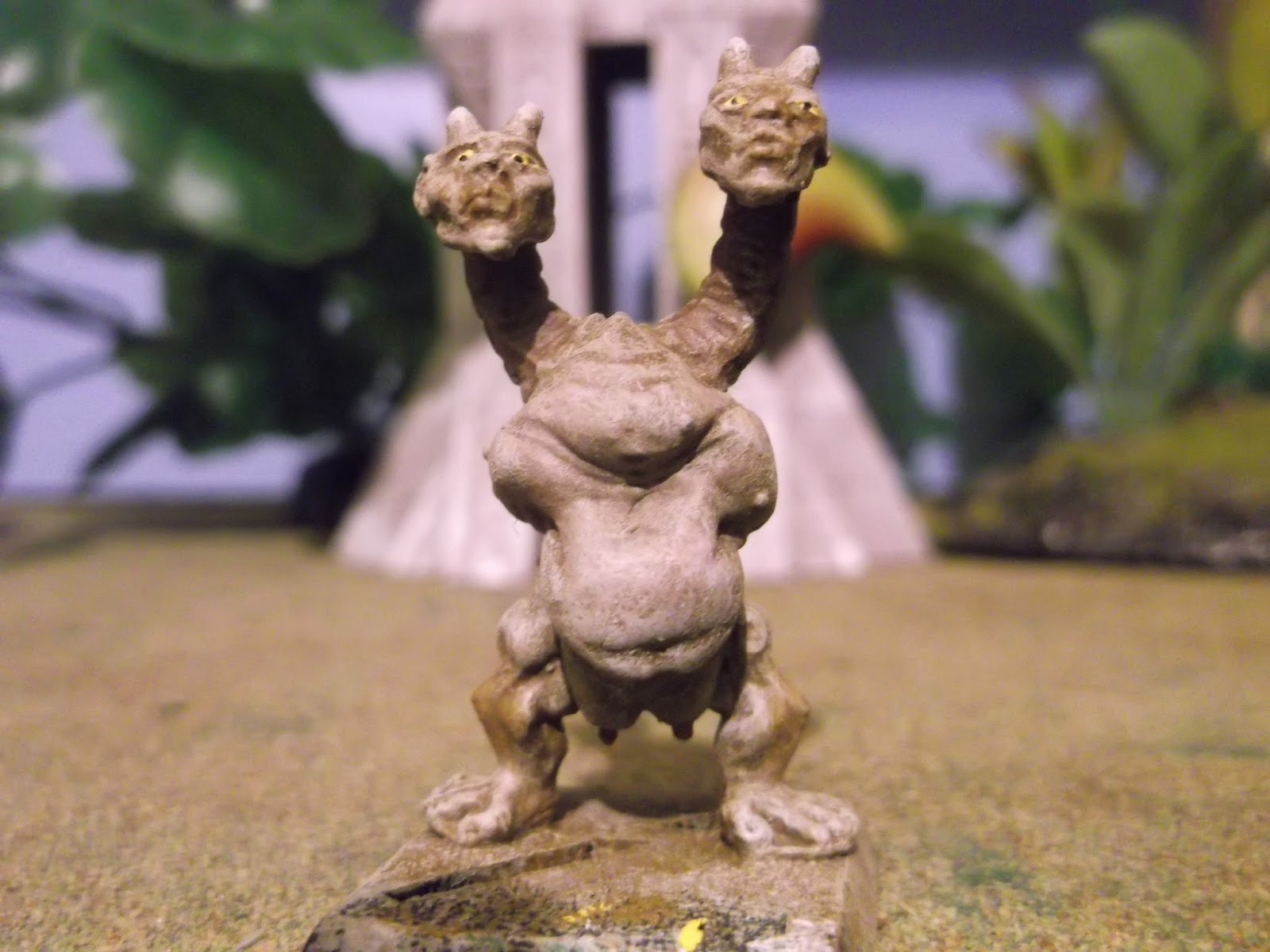 Citadel C22 Creatures 'Chaos Demon'.
I normally don't like two headed things, but I have always liked this model, and only mamanged to buy it very recently. I especally like the way the two heads look slightly different. The miniature is unsual in that it has no arms, its legs seems to be its arms, and the feets are more like hands. It also seems to have to female looking breasts hanging down from underneath. 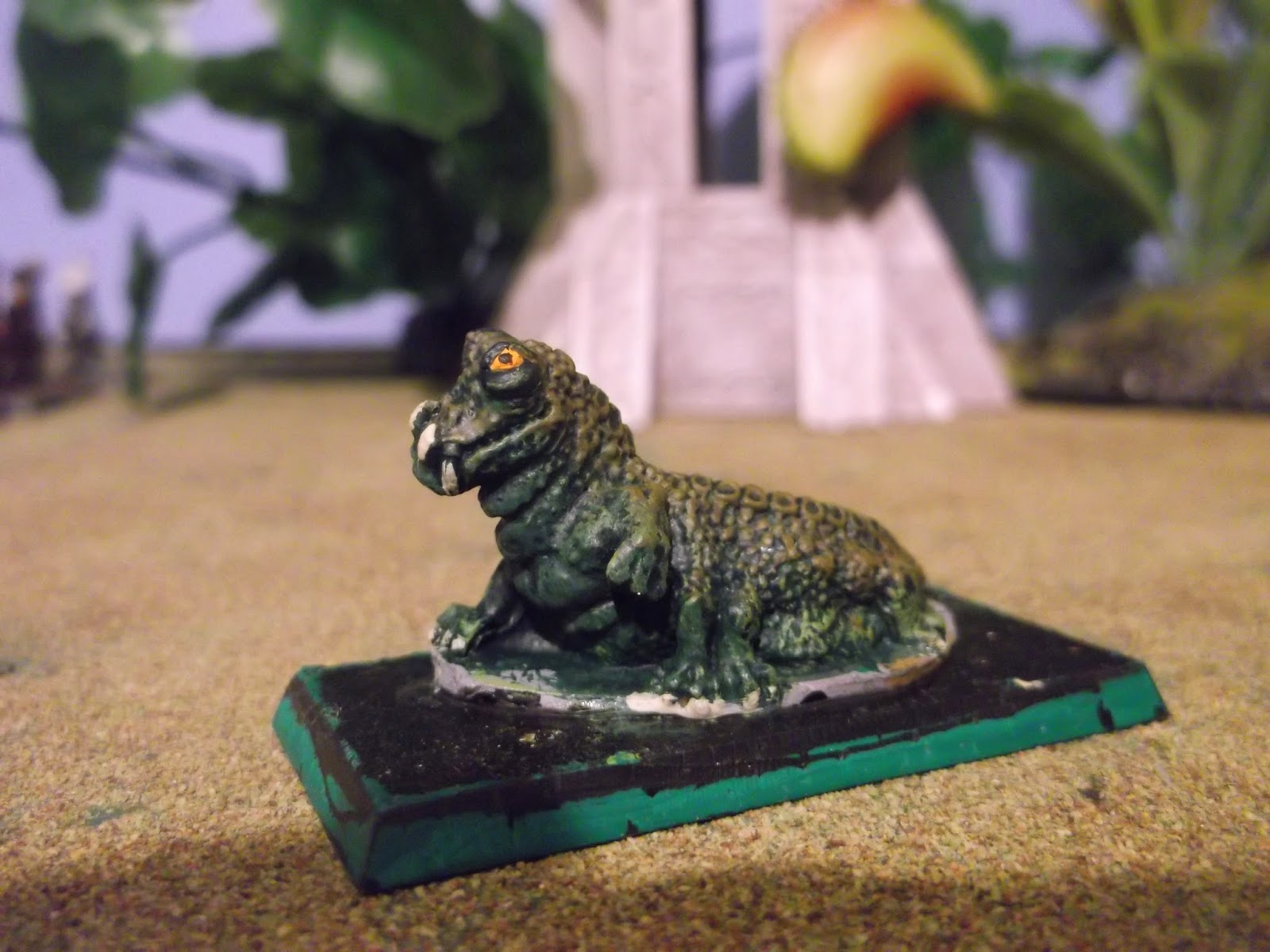 From the same C22 range, a solid based Basilisk.
I think he looks quite cute, and with propably end up with the Slann Cold One Warhounds.


Next weeks update will be the third in my series of anaylses of 3rd Edition Warhammer Armies army lists; the Wood Elves.
Apart from that I hope to be painting more Slann, on which I will update the week after.
Posted by Goblin Lee at 22:54