I've been busy painting a lot more Squats, this time mainly Las-Gun armed Troopers, but also a few others. These are just the ones I have based, I've painted at least this again, and they are just awaiting basing and photographing.

In addition I have been doubly distracted. Firstly there has been talk on the Oldhammer Facebook Group about painting Bob Olley sculpted miniatures, and so I have made a start on, guess what, more Squats! This time his IC501 Iron Claw range. I have found a very quick and easy way of painting them which I think looks good. It gives them a look of Chaos Squats, so the plan is for them to be the army of Warlord Thargrim 'the red', Tratior Squat Commnader, from a quote in the 1989 Squat army list. More on this later as it is more of an on/off side project.

Speaking of Tratiors, my second distraction is to return to sorting out my Rogue Trader Tratior Legions. I started this a few years ago, but after a painting related problem with the Nurgle Marines, I kind of ran out of steam. I have been paint stripping old miniatures, buying up odds and ends, and am preparing to sort them out into their repesctive Legions. However, I will finish the current Squat project first. 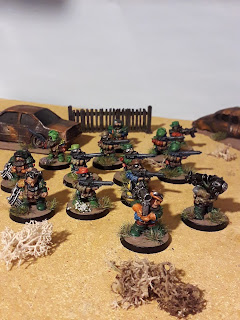 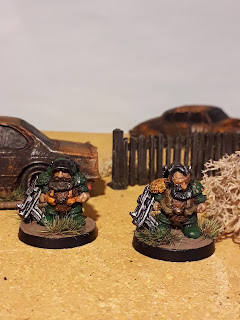 'Owen Garand' and 'Roth Bergmann'.
A pair of Squats with Bolters. I think I made the varnish a little too strong, but it might be better than them chipping. 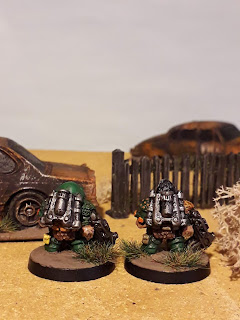 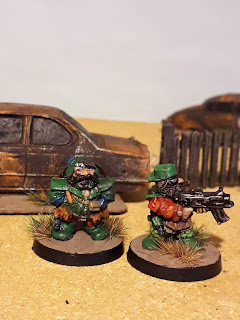 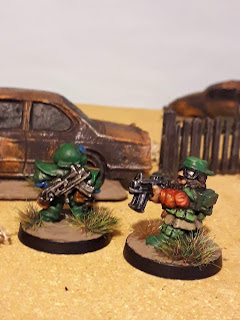 Rear views.
'Mauser Von Dreyse' is the same sculpt as the 'Lewis Gunn' miniature, but armed with a Bolt Gun. 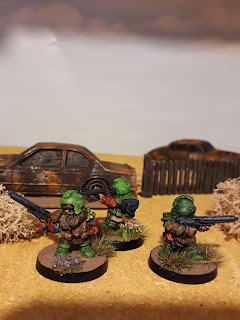 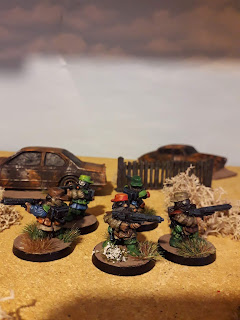 Five 'Lewis Gunn'.
He seems to be one of the standard basic sculpts from which several of the original Squat releases were sculpted. As an aside, there seems to be a lot of cigar smoking in t he Squat Military! Perhaps that's really why they only have a move of 3", they are all sort of breath! 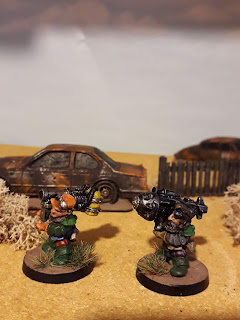 Heavy Weapon Crew.
On the left  'Gunner Karl' armed with a Rogue Trader Ork Heavy Flamer, which I intend to use as a normal Flamer.
On the right is 'Gunner Keif', with a Conversion Beamer. 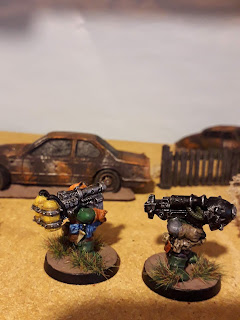 Rear views.
I like how the yellow flamer tanks turned out, I painted them to look like old plastic tanks. 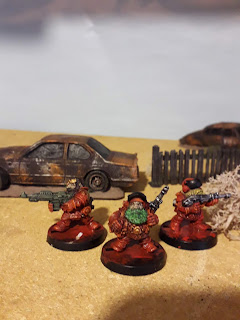 Bob Olley IC501 Iron Claw Squats.
I am painting them as a Chaos Squat Army of Khorne, and so picked a very straight forward red paint scheme, using a limited palette of red, black, gold, and Iron: the colours of Khorne!

Next update will be on the full range of the RT302 Space Dwarf/Squat Command range.
Posted by Goblin Lee at 17:27