My progress on the Snakemen has recently ground to halt. I tried to figure out why, and concluded that despite them being wonderful miniatures, I had chosen the wrong route for them. Although the paint scheme and approach was fine, I became bored with painting them. So I had left them be for a while, concentrating on assembling my Age of Sigmar 'Death' army, as well as concerned with work and other things. In short, as my lack of blog updates shows, I hit a doldrum in painting.

However all that changed with me looking again at my copy of Rodney Mathews art book 'In Search of Eternity'. The colours and style of art inspired my to looked again at the Snakemen, and to consider a much more brighter colour scheme, with a broader palette. Less dull colours. Also, I don't want to have a mono paint scheme for the army, with all green skinned Snakemen but a mix of vibrant colours. I will probably keep the gold colour for the armour, with a couple of exceptions, as it looks nice. 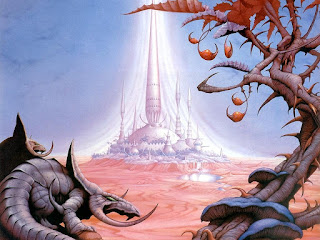 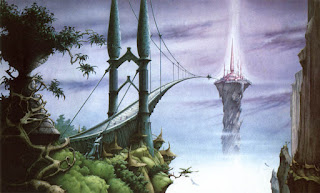 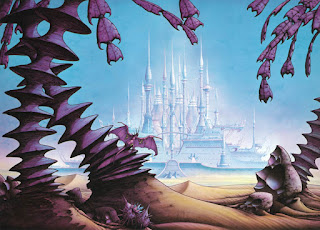 "Tanelorn" (1976).
(All pictures property of Rodney Matthews, or something else legal here that shows it's his stuff. Check out his website and/or buy the book! :)  )
http://www.rodneymatthews.com/main.htm

So the plan is to give the Snakemen more individual skin tones, brighter, with more blues, bright greens, purples, yellows, and as well as more convertional snake colourings. Afterall they are also creatures of Chaos, and suggestive of Slaanesh in the Warhammer setting, and so bright colours and pastels seems more appropriate. It will be more fun too!

I have also rebased them, putting them on my first choice of base, a 40mm lipped round base. I like these bases, and have based many Goblins on the 30mm version. The Snakemen can still be used for Warhammer Fantasy Battle, but they also feel more open if I ever decide to use them for Rogue Trader or skirmish gaming. I'll probably keep the desert basing effect though. Also, I have broken a little with the '1980's only' and added several parts from plastic kits from the 1990s' and 2000's. I have abandoned the purest appraoch for the Snakemen to add a little more different details to them.

In addition, I have also picked up a few more Snakemen from e-bay, bring the total to 45. This works out to four units of 10, one army General, one Army Standard, and two heroes. The last remaining Snakeman I might convert into a Chaos Sorcerer in Chaos Armour. But I'm not above expanding the army. 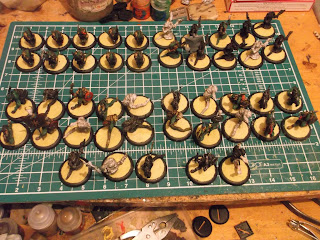 All 45 of the critters
(please excuse the state of the painting desk!). 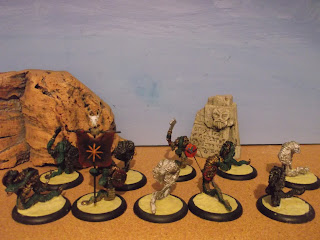 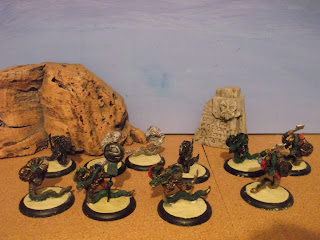 The second unit of Snakemen largely as above, but with a converted Higgat Dwarf Slicer standard bearer. 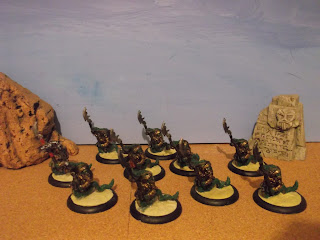 The third unit is made up of ten of the Saranth Elf Mangler, with a converted standard bearer. 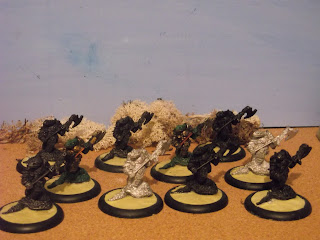 The fourth and final unit is of ten S'Sirron Fangthrane Snakemen. I need to convert up a standard bearer for this unit. 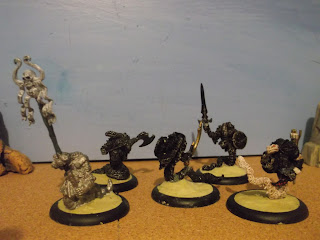 The Characters.
From left to right are the Army Standard Bearer; a 'spare' S'Sirron Fangthrane who will probably end up as a Chaos Sorcerer; the Army General; and two Chaos heroes. 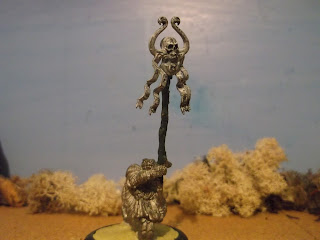 The Army Standard bearer.
I converted him up from a broken Saranth Elf Mangler by adding a standard top from the Warhammer Tomb Kings Necropolis Knight set. It reminds me of the standard top of Thulsa Doom, from the film Conan (1982). I have a wonderful Thulsa Doom miniature to paint as well, but more on that in a later update. 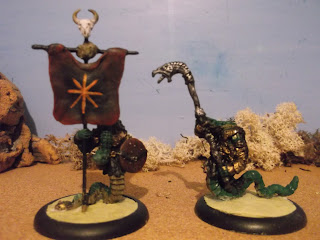 Two unit standard bearers. The one on the right is made using an old Citadel Elf horn. 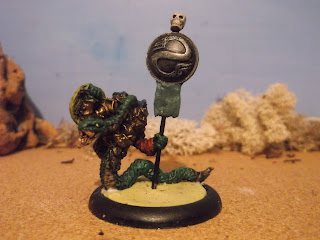 Another unit standard bearer. I added a little greenstuff banner below the shield, otherwise it looked a little like a lollipop sign! 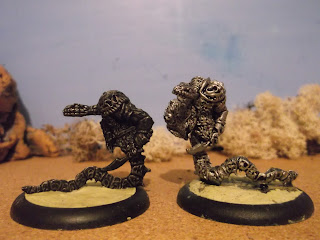 To add a little variation to the S'lon Life Smasher miniature (and some of the others) I have re-positioned the tails and head angles on some of them. On the left is the original pose, on the right one of the variants. I have repostioned a few of the heads previously, but I stook the idea of moving the the tails and bodies more from a fellow bloggers blog here:
http://leadplague.blogspot.co.uk/2015/12/chaos-snakemen-again.html 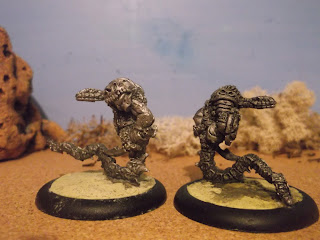 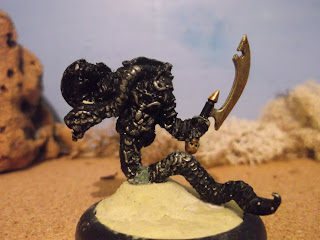 The Army General.
He was a Higgat Dwarf Slicer who had seen better days, with a damaged midriff and broken off sword. However with a little green stuff and the addition of a another Tomb Kings item, this a plastic Khopesh, he looks a lot better. I think that the sword give a slightly more exotic and perhaps travelled look to him. 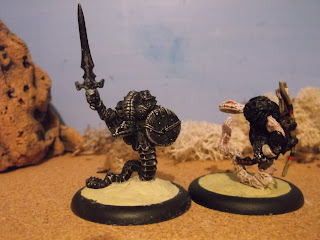 Two Chaos heroes.
After reading some of the Elric books I thought it would be fun to have one of the Snakemen as an alien aspect of Eternal Champion concept. Orignally this was going to be the Snakeman on the right, but I decided to convert up a S'lararet Splintered Fang with an old 2nd Edition 40k Chaos Marine sword which to me looks a little like a kin of Stombringer. I will paint up this miniature Albino skinned.
The other Snakeman I converted to have a bow. Now I am going to repaint him in red armour and have him as a sort of Rakhir the Red.

The next update will be on some painted Snakemen!! :)
Posted by Goblin Lee at 20:39 4 comments: