I have been sorting through my Oldhammer armies of late, and have realised that I have been neglecting the Slann. I have quite a sizeable collection of Slann, many of whom are either unpainted, or I am not really happy with. I haven't quite settled on how I want to paint all the Slann, so I thought I would paint a small regiment in more simple colours, and try out some different basing, the regiment below being the end result.

I chose the Slann Alligator warrior miniature, named 'Pek', released in 1986 as part of Trish Carden's (then known as Trish Morrison) slotta based range of Slann which served as the mainstay throughout 3rd Edition. One of the interesting things about this particular miniature is that are two different types, which I have shown below.

One version has a fin on the back of the Alligator hide, the other does not. I am not sure why. The fin version appears to be genuine as it isn't a conversion, and I have purchased them on two different occasions from differing sellers. I suspect, but do not know for certain, that the finned version may be a later GW studio conversion. I have spoken to Trish Carden via a mutual friend, and she said in about 1988 GW were going to refresh the Slann range by releasing some more miniatures, largely based on her existing range. Various sculptors then sculpted more Slann, which received a limited casting run but were not released (or released widely). I think that this Pek might be from then, although if anyone knows otherwise please let me know.

Painting wise, as stated, I took a simple approach. The Slann themselves were a dark green base (Citadel Warpstone glow), highlighted with Vallejo's Goblin Green, which is the same as the old Citadel paint of the same name. The hide is Citadel Castellan Green, highlighted with Citadel Moot Green. I wanted to give the Slann's bases that jungle feel, so I based them with Vallejo's thick mud, and added various tufts to give them a more jungle look. I am relatively happy with the more simple paint scheme as they are a test unit. I want to paint the Slann in a more straightforward manner, and then add detailing, rather than get too lost in trying to do too much. 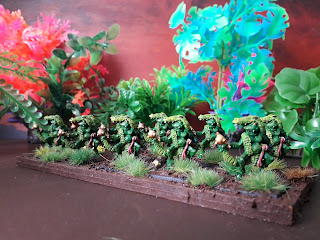 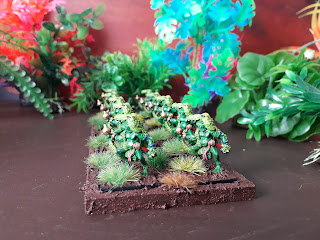 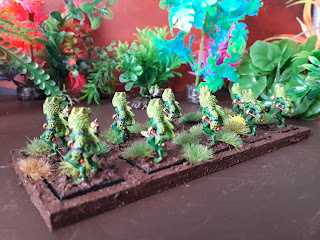 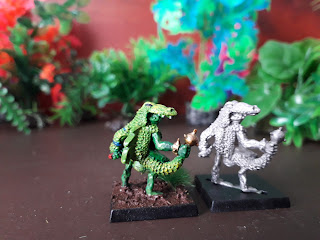 Comparing the rear views of the two 'Pek', one with, and one without, the rear fin.

The next blog update will (well, hopefully!) be an Oldhammer themed showcase of something quite special and interesting.