I have a lot of miniatures to paint (well, that's an understatement!), and recently realised that I have been approaching things in what I consider the wrong way. Instead of picking one project and ploughing on with it regardless, which often results in getting bogged down and disenchanted, I am now just painting things I wish to paint. This, I have found, is a lot more enjoyable, and still allows be to delve deeper into any particular army as an when.

One of these projects is from the photograph of the regiment of Empire Helblitzen in the 3rd Edition Warhammer Armies book (below). Like many people over the years I was always intrigued by the photographs, and a  few years ago I was looking at this photograph on page 58. Now I thought to myself I must have most of those miniatures somewhere, and low and behold, I had all but two. A little visit to e-Bay and one to Wargames Foundry, and the Regiment was completed.

Why do this? Well, it's a fun thing to do, and I am going to require a couple of Helblitzen Regiments in my 3rd Edition army anyway, so why not this one? I am going to paint them in the colours in the photographs, after all it would be a shame not too. 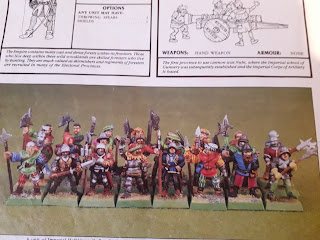 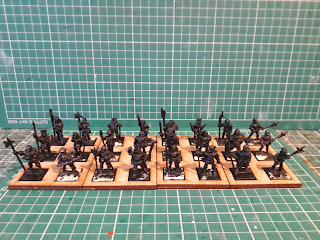 The regiment is comprised of a mix of Citadel Human miniatures from their various F-series Fighter ranges, and the C46 Militia range.
I would think, although of course I do not know, that the regiment was just quickly put together with the painted miniatures which they had at the studio at the time, rather than someone's specific component of an army. I think that gives it a little ad-hoc charm.
Below I will detail each of the miniatures in the regiment, with the Citadel series code and range in brackets). 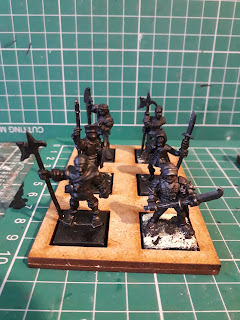 Front to back, and starting left to right:
Dwyer (F2 Dogs of War); Dransfield (F4 Men at Arms); 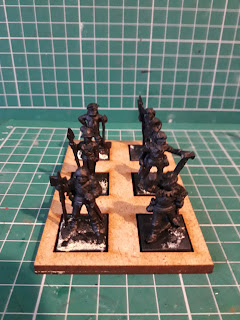 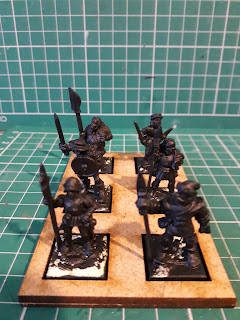 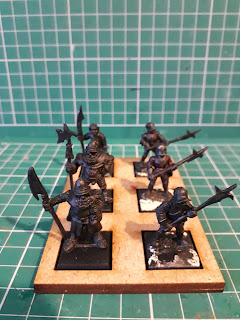 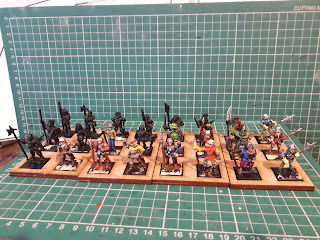 ...I've made a start, work in progress!
Next update will probably be some Turnip28 conversions or more Helblitzen or something else.
Posted by Goblin Lee at 20:03 6 comments:

I have finished painting the Alpha Legion Land Speeder Squadron.

As per my last blog update, I have been painting my Rogue Trader Alpha Legion in the old colours suggested in the artwork in Slaves to Darkness, namely green. I think this makes them look quite striking, and I am quite happy with the result.

They were fine to paint, not fun, but not a chore. For those of you unfamiliar with the models, they are a bit of a task to assemble, and so painting them was the least of the challenge 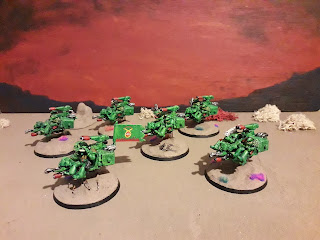 Land Speeder Squadron scouting ahead, looking for Loyalists.
I mounted the Speeders on 60mm round bases to give them a better look and more sturdiness.
I also had a go at a free-hand Alpha Legion banner for the squad leader, which I think looks good enough for the tabletop. 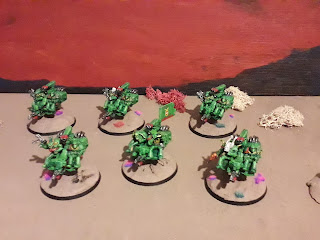 More of a top view. "Coming right at you!"

I have been busy converting some more Turnip28 stuff, and painting a few more Rogue Trader miniatures. I also am looking to start a bit of an iconic Warhammer Fantasy 3rd Edition Regiment from the Warhammer Armies book. I also want to get some goblins painted at some point too!
Posted by Goblin Lee at 20:41 8 comments: