Amongst other things, I been continuing painting my Horus Heresy Thousand Sons. Now after last months internet related debacle, I am pleased to say I now am back online (after three weeks, and a £70 Computer repair bill!).

Anyway, painting wise I have painted 3 Contemptor Dreadnoughts, and a 10 man strong Missile Launcher armed Heavy Support Squad. I have a few more odds and ends for this army to paint, but I am eager to move on to some older miniatures. I have been paint stripping and reorganising a couple of my more Late and Middle- Hammer armies, namely Tomb Kings, and Praetorian Imperial Guard, with an eye to re-visiting the look and feel of the armies. More on that another time though.

Returning to the Thousand Sons, I have been painting them following the suggestions from an old Games Workshop YouTube video which I have found to be useful, for which the link is below. There is a more recent version of the video as well, but I found it unnecessarily complicated, and so I followed the older one.

The bases were achieved by first cutting up some plasticard in small squares to look like stone slabs. I painted them in a black and white chequerboard style to add some contrast to the base, and because I like the style. I added the texture by using Citadels Martian Ironcrust texture paint, and then when it has dried, dry brushing the Martian Ironcrust, the slabs, and the bottom parts of the legs with Citadels Eldar Flesh to suggest dust.
I still need to add add the Thousand Sons transfers, but I shall probably do that for the whole army in one go. 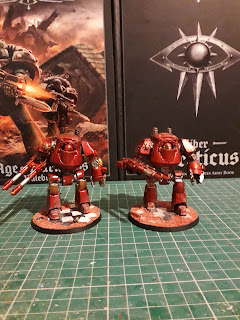 Contemptor Dreadnoughts.
I have opted for the twin-linked lascannons as I like the anti-vehicle punch, and they look good. I also added a spare Tomb Kings scarab (from the Warsphinx kit I think?) to the shoulder to give that little extra decoration which you sometimes see in the Thousand Sons artwork. 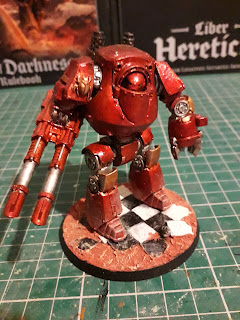 I should really name these, but for now here's the first one! 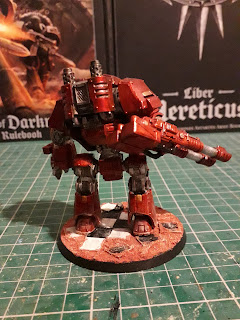 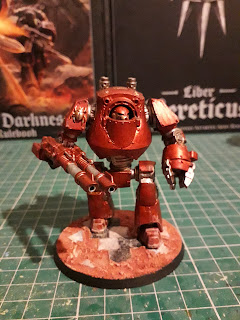 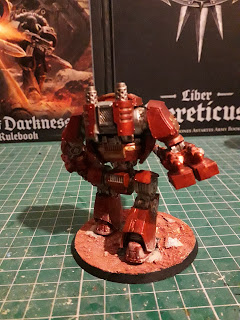 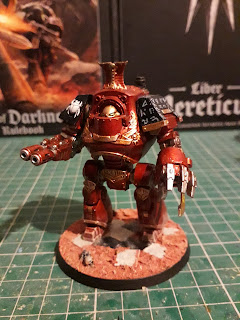 My converted Contemptor-Osiron Dreadnought.
This mark of Dreadnought is unique to the Thousand Sons and is a form of Psychic Dreadnought. I thought it would good to have one in the army. It is converted from the Dreadnought kit from the Betrayal at Calth box set. I did this rather than buy the Forge World kit because I didn't want to spend the money on the expensive Forge World kit, and because being Forge World resin I didn't really trust it not to snap or melt, or to arrive damaged. So I converted my own unique one for a kit I had to hand. 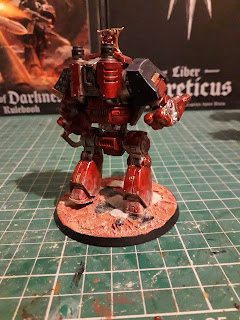 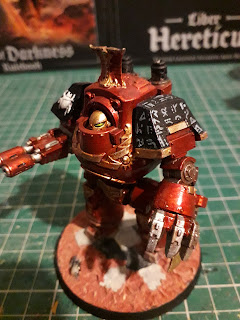 Side view showing the magical inscriptions. 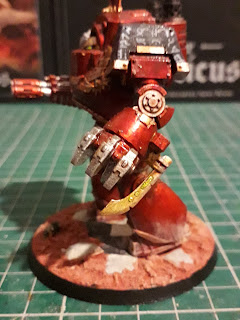 The Contemptor-Osiron Dreadnought is also equipped with a Gravis Force Blade. In order to have one of these on the Dreadnought I used a Tomb Blade from an old Tomb Kings Tomb Guard arm. This I found was a good size, has lovely inscribed arcane details on the blade, was free as I already had one (!), it fitted the look well with the skull hilt being away from the arm, and of course it is less like to snap off or droop, unlike the Forge World one. 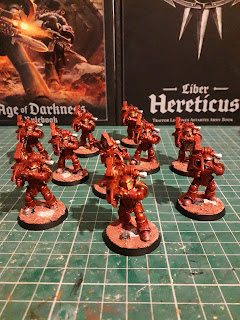 Heavy Support Squad.
I wanted a Heavy Support squad in the army, and opted for the Missile Launchers as they have a good anti-vehicle role, anti-aircraft role, and can also shoot infantry if the need arises. I wanted to use the Mark III bodies to give that heavy, chunky feel, however I didn't have any Mark III Missile Launcher arms. So I used the Mark IV ones I already had, which I don't think really notices greatly. 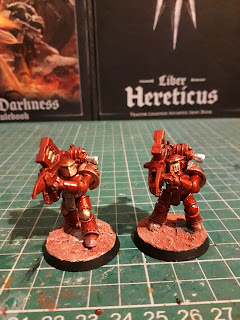 The Sergeant (he has extra gold painted on him) on the left, and an ordinary Marine. 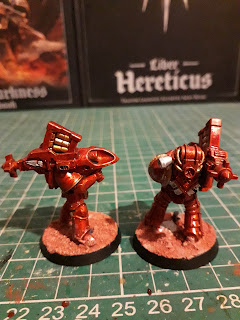 Views of the missile launchers.

Next blog update may be on some more of the Thousand Sons. However I am currently (last night and this morning in fact) test painting and working out colour schemes for my revamped Tomb Kings army, and so I might feature some of those. I also want to get the Tomb Kings painted with a wish to working on some Goblins toward the end of the year.
Posted by Goblin Lee at 14:12 4 comments: