Yes yes yes,  I know I should really be continuing with painting the Daemon Legions, which is a fantastic project. However, yet again I have had a busy month and not had time to do any real painting. Indeed, I have had to dismantle my painting table in order to remove carpets and attend to a leaky radiator! None of these shenanigans, and working, has left any time for serious painting.

Instead, I have only painted a few test miniatures for my 4th Edition Chaos Dwarf army, painting them whilst sitting on a bed and using a couple of plastic boxes as an impromptu painting table! I never really got on with 4th Edition Warhammer Fantasy Battle. After 2nd and 3rd Editions it seemed such a let down. I was further put ill at ease with the dominance of the so-called 'Red Period' of Citadel Miniatures, both with the painting and sculpting, and so drifted away from Games Workshop for most of the 1990's.

I did however buy a few of the Hobgoblins which I always liked, but I never liked the 'big hatted' Chaos Dwarfs at the time. Over 20 passed and I decided to reappraise my view of the Chaos Dwarfs, and to my surprise I really liked them! I picked a few off of e-bay and, which as is often the case, this led me to collecting an army of them, well over 100+ including Hobgoblins, monsters, and artillery.

I really would like to paint these, but I have never settled on a paint scheme. The old 1990's red scheme is actually quite nice in it's own way, but after a test model or two I found it to be a real faff to do. To paint them in that style would take a lot of time away from all the boxes of other stuff I have to do, and I also wasn't too struck on them en-masse as an army. The paint scheme seemed 'too busy'. I tried a couple of other schemes, but It was only until the other day I considered the rusty look. I like the idea of the Chaos Dwarfs living in some fantasy version of a polluted industrial wasteland, and so have gone for the grimy grim look, using Citadel's Technical paints. I picked up the idea of adding old watch parts to the bases from the Nergling blog ( http://nergling.blogspot.com/search/label/minis ) . 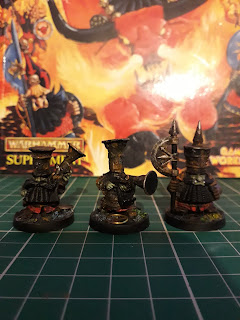 Three Chaos Dwarfs.
I used Citadel's Typhus Corrosion over a black undercoat, with Ryza Rust. I have kept the palette quite small and simple to avoid looking too busy.
I also chose a pallid green look for the skin, to make them look less healthy. I will vary some of the colours and tones as I go on. I also might need to highlight the beards a little more.
A controversial topic, but I prefer them on the 25mm round bases rather than the smaller 20mm square. 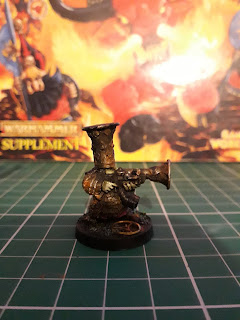 Blunderbuss.
I have kept the watch parts on the bases to a minimum to avoid clutter, and also so that I can paint the dark bases with dashes of bright colours to suggest chemical pollutants. 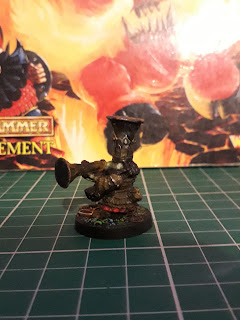 The left side.
I want to keep the red clothing to add a bit of colour and contrast, otherwise them might look too dark and amorphous when in regiments on the table. 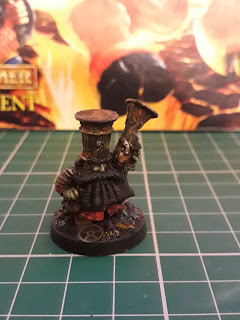 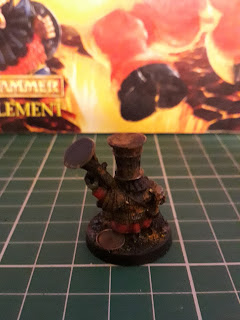 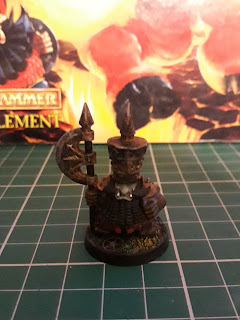 Chaos Dwarf Axeman.
This is one of the mono pose plastic Chaos Dwarfs. He is actually quite full of character for a mono pose miniature. He requires a shield. 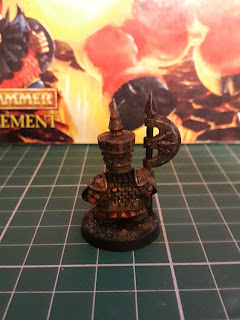 Next blog update might be the Daemons or the Chaos Dwarfs. I might even paint up something Christmassy!
Posted by Goblin Lee at 00:49 12 comments: