A quick visit to Nippon.

As I have been sorting out my old miniatures, sometimes I have come across old miniatures and ranges that I have always wanted to paint, but have never got around to. Some of those are a few of my Nipponese miniatures, from Citadel's OH and C05 Oriental Heroes ranges, with two of the cannon crew from the C22 Nippon rocket. At the end, there is also one of Jes Goodwin' wonderful C23 Ogres.

I am not planning on painting the whole army yet, but I wanted to paint a few test miniatures. These were just to get a 'feel' for painting the ranges. I enjoyed painting them. Why green? Well I used to play a lot of the computer game Civilization 3, and when I played the Japanese, the Samurai icons were always green, with some blue. So I thought I suited my idea of a fantasy Nippon. Also, in my mind it is going to be a fantasy army as I did'nt just want to paint a Samurai army with an added Ogre and Wizards, but to give the Nipponese army a slightly different feel to an historical Japanese army.

As for the army itself, I am planning to base it on the 3rd Edition Warhammer army Empire list. This gives me some good infantry, archers, cannons, a Dragon, and access to mercenary Ogres. However I have other things planned before I paint them, and I still need to finish off the army list. As a clarification, I have based the miniatures on 25mm square bases, rather than the standard human sized 20mm. The reason I did this was that many of the miniatures, especially the Samurai, were too squashed and crowded on 20mm. Building a regiment seemed less fun and more like and exericse in tessellation. I think it suits them fine, and won't really impact gaming.

For reference, the Oriental Heroes ranges can be found here:
http://www.collecting-citadel-miniatures.com/wiki/index.php/Oriental_Heroes
and
http://www.collecting-citadel-miniatures.com/wiki/index.php/Oriental_Heroes_-_C05_(solid_base)
with many currently still for sale at Wargames Foundry,
https://www.wargamesfoundry.com/collections/samurai
and
https://www.wargamesfoundry.com/collections/ex-citadel-games-workshop-modelsThe pre-slotta C05 miniatures and later OH ranges are sculpted by Aly Morrison. The Ninjas are the work of the Perry Twins. 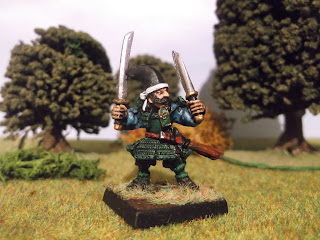 OH2 Samurai with two swords.
He is one of several sculpting variants, this one with facial hair. I like this, and the other two sowrd miniatures. I have read that they were also a crossover range with Citadel and TSR's joint 1980's AD&D range.
They are quite bulky. As a test model I think it turned out well, but I might add a little more colour to the armour and sash, and pattern detail to the clothing when I paint the rest of the army. 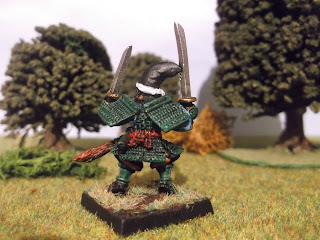 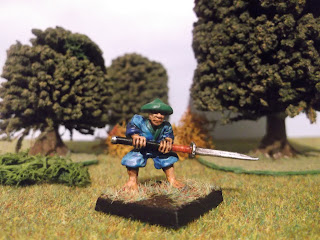 OH3 Rampaging Ronin.
Again another nice sculpt, one of several variants, from the OH range. 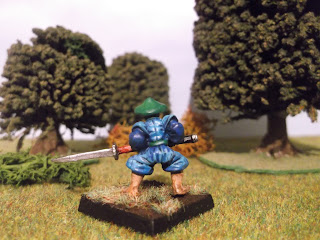 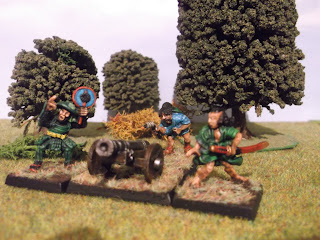 Nippon cannon!
The cannon itself is an old Citadel sculpt, re-released by Wargames Foundry. Two of the crew are spare crew from the C22 Nippon Rocket, the third being a pre-slotta C05 Samurai.
Citadel did'nt release a Nippon cannon, so I bought two rocket crew from e-bay, and added the Samurai commander to made a third.
I think the cannon works well as several early historical Japanese cannons were of European origin. 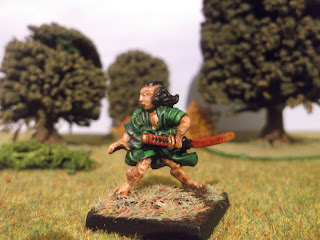 Pre-Slotta C05 Oriental Hero Goro Tokimane. This is one of my later Foundry produced ones. 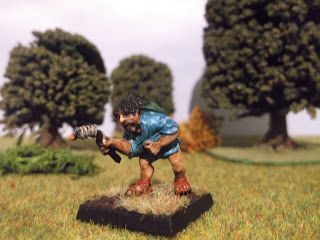 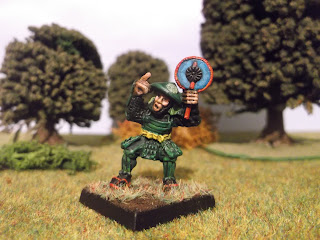 C22 Nippon Rocket crewman with fan. I assumed he is the commander waiting to giving the order to fire. 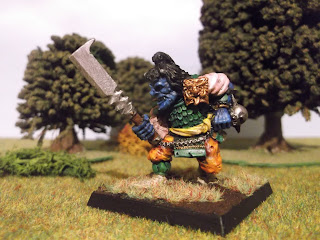 The C23 Ogre, 'Oriental Ogre', sculpted by Jes Goodwin.
He is a great sculpt, like all of Jes Goodwin's Ogres, and sculpted to look in a Japanese style.
I have painted him blue to suggest a large blue Oni from Japanese Folklore. 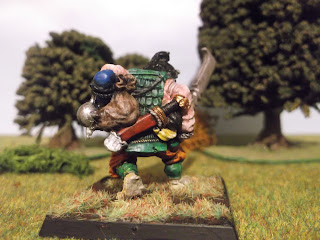 I am not sure what my next update will be on. I have several projects current at the moment.
My primary project is a 3,000 point Dwarf army of Renown and Legend, composed of 1980's Dwarves from the Regiments of Renown, led by the Dwarves from the BC3 Dwarf Lords of Legend. Another project is a re-visit to the Slann of the Magnificent Sven Scenario. A third project nearing completion is my collecting of a 2nd/3rd Edition miniatures for a Kislev/Dolgan Raiders army (complete with Centaurs!). If that was'nt enough, I have been collecting Undead and Characters for the Terror of the Lichemaster/Vengeance of the Lichmaster scenarios.
I also have a regiment of 20 Runequest Baboons to paint at somepoint!

The Golden Dragon Emperor of Cathay.

I've still been sorting out miniatures, and being ill, so I have'nt really been productive in painting or blogging. However, I have been full of ideas for armies, which I promise will be blogged on soon!

One of the ideas I have is for a 3rd Edition Warhammer army for Cathay. Now Cathay was the Warhammer Worlds equivalent of China. Unlike Nippon (the Warhammer equivalent of Japan), Cathay never really had a lot of attentionat the time. There was a little background, and a few 'Chinese' looking miniatures, but very little else. Post 3rd Edition the background was expanded a little, but again not a lot.

However, one of the things I did read about was that Cathay was (unsuprisingly) a land of Dragons, and the Cathay Emperor was rumoured to be a Golden Dragon in human form. I quite like this idea, and so decided to paint up an old Ral Partha Draconian miniature from 1989 to represent the Emperor in a more humanoid form. I chose gold for the skin, and Imperial Chinese yellow for the robes. He was great fun to paint, and I can quite imagine him as a Level 25 Wizard leading a Cathay army.

As an aside, concerning the Cathay army I have an idea. As I am building a series of armies only using Oldhammer era miniatures, am a little stuck for Chinese/Cathay miniatures. I have a few warriors from the Oriential Heroes ranges, but the only Chinese infantry miniature Citadel made was one in the Blanford Warriors range. Whilst still for sale from Wargames Foundry, he comes as part of a pack of other miniatures, rather than individually, and so not easy to build up an army from him, especially using one of the Human army lists.

So the plan is/might be is to use the High Elf army list (bare with me on this). As Cathay is a land of Dragons, the High Elf army list allows for five Dragons as part of the rank and file allowance, two Dragons in a bound monstrous host, and several Dragons as War Beasts for characters. The only non-Dragon miniatures would be the Emperor and maybe a Manadrin Wizard or two, so using High Elf profile for them is'nt too strange. It would be an interesting army to paint and field. As for Oldhammer era Dragons, I can use the re-released Ral Partha Celestial Dragons miniatures. 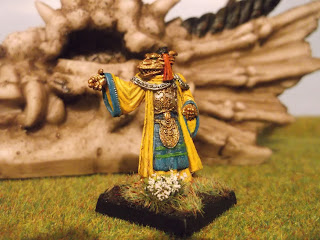 The Golden Dragon Emperor.
I love this miniature, he has a great feeling of power and menace. He faintly reminds me of Thulsa Doom.
I chose the yellow to give that Imperial Chinese look. The sculpting on his beastplate is lovely. 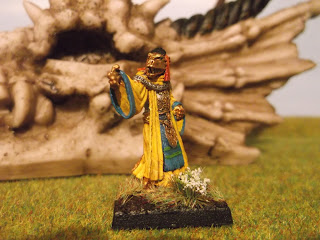 Beckoning barbarians to their doom. 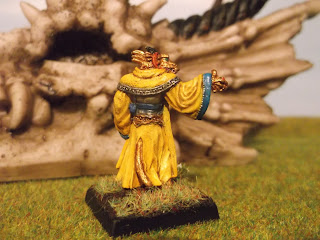 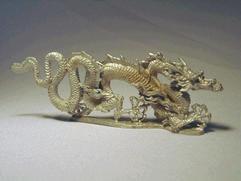 The Ral Partha Celestial Dragon. I plan to use five or six of these in the army, but I will have to send off to the USA for them.


Next week (I do promise to update next week too!) will be a few Nipponese miniatures I have been working on, including the C23 Oriential Ogre.