Part Two of the Kegox Dragon updates, and I have finished painting him! I have been really busy with a lot of other non-miniatures related things which have, quite frankly, got in the way of myself blogging and painting, although curiously not in the way of buying!

Finishing painting Kegox wasn't greatly interesting really, but it was good fun. Since the last blog update, I decided to mute the tone of the red I had been using for his underside as I thought it was too bright. I mixed a little dark brown to the red base and then progressively highlighted my way up to orange in places, keeping the depth of colour. I did a similar thing for the turquoise on the legs, redoing the base a little darker and then highlighting to a much lighter shade, this time to a white.

Concerning the green main body, I gave the body a wash of the original green colour (Citadels 'Warpstone Glow') to dampen down the previous highlights. I then worked the highlighting up using Citadels 'Moot Green', and then progressive mixes of that and white. I chose to do a green/white mix because I wanted the final highlighting to be very white-ish, in a similar vein to some of the older 1980's styles of highlighting on some of the Dragons. This can be seen a little more clearly on the spines, especially on the neck.

In order to tie-in the turquoise of the legs to the green of the main body I lightly dry brushed some of the Moot Green over the turquoise to blend the two colours together. I did this after I had already highlighted the turquoise. In keeping with the Sussex theme, I think this worked out nicely as both colours have a suggestion of the sea. In a flight of whimsy, I think the the green body and turquoise both give the impression that this particular Kegox has emerged from the soul of Sussex, with the turquoise representing the sea, the green the rolling South Downs, and the red representing  poppies and other Downland flowers.

Anyway, enough South Downs rambling. I really liked painting Kegox, and enjoyed the 'Dragon terrorising Sussex' theme. I was going to add more to the base, broken road signs, bits of car, or traffic cones maybe? However, I decided to keep it simple, I didn't want to over clutter the base. I did opt for a mix of flock and grass and flower tufts, to give a more uneven wilder Downland look on the chalk. 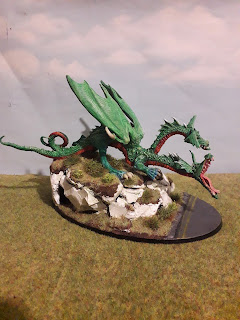 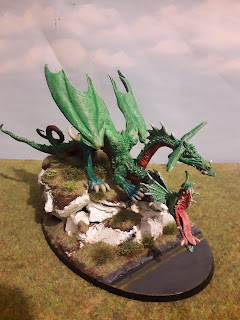 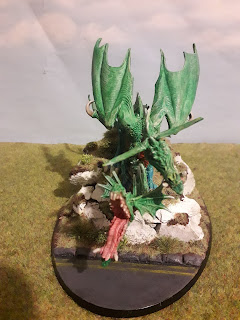 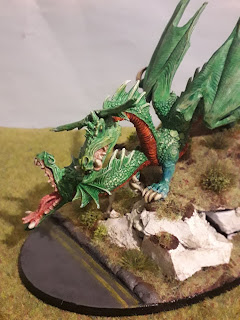 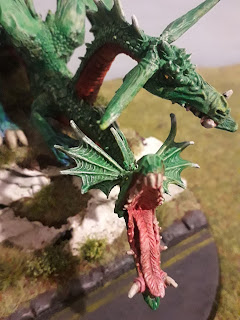 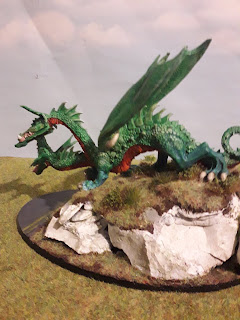 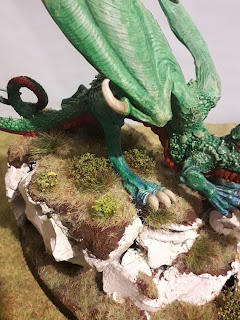 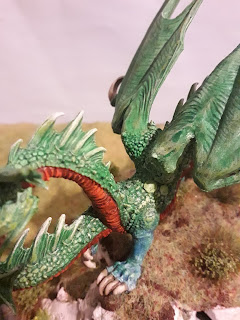 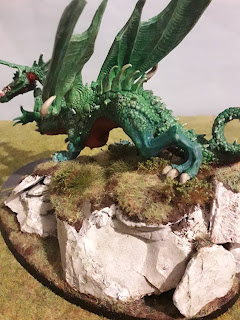 I have been sorting through my collection of armies, and so my next blog update might be on my 'Big Hat' Chaos Dwarf army which I have been tinkering with, although I do have a lot of other things planned, but I never seem to get the time recently. :(
Posted by Goblin Lee at 22:58 No comments: