The Bears of Kislev and the Tigers of Ind, and other stuff besides.

Now I know that I should be painting Goblins, however I have also been sorting through a lot of my other 3rd Edition Warhammer armies. Two of the armies are my Kislev army, and the army of Ind.

Neither of these armies were official armies at the time, nor did they have a 3rd Edition army list. The Kislev did appear as a Mercenary Contingent in the 2nd Edition Ravening Hordes book, and is mentioned in entries in both the Old World Ally, and Old World Mercenary contingent lists. Both were however mentioned in the background, and a few miniatures which could be used for either were produced more in the earlier C01 Fighter range than anywhere else.

For those of you unaware, Kislev was the Warhammer version of (Western) Russia, which was later expanded a lot more in later editions of Warhammer. Ind was the their version of India, which at the time, and since, has received little or no official attention, and very little from fans (there is an unofficial Army Book somewhere online).

So anyway, as part of my grand sorting though of my collection I am building a Kislev army, and an Ind army, amongst many others in my as 'it would have been' in 3rd Edition. This means only using Citadel and the associated miniatures from the 1979-92 'Oldhammer period'.  I will explain more of the details of each army once I come to spend time competing them, but for now here is a taster of some of the background work and collecting which I have been doing. 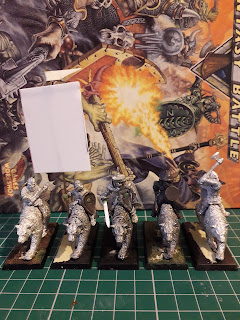 Bear riding Boyars.
I wanted to have bears in my Kislev army somehow as it seemed fitting. I owned two of the old 1987 Wood Elf Beast Masters bears, and I was going to just have one as a mount for the general (Tsar), with another as a summoned bear for a host. Then I luckily won an e-Bay auction for another two, so buying a fifth bear for a small mounted elite cavalry unit to accompany the general seemed a good idea.
All of the riders were originally dismounted miniatures, which I have converted to be mounted.
As I am using the Empire army list for the Kislev, and will count these as 'Temple Ritterbruden'. 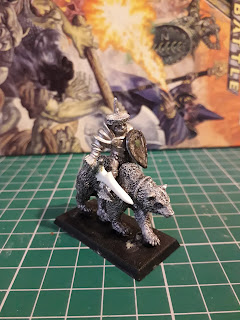 Tsar on a bear.
I have used the F2 Lord of Battle miniature 'Otto Wolvesbane' as he is heavily armoured and has fur trim around his helm. The sword blade was quite delicate and broke whilst I was converting him, so I replaced is with a plastic one from the Fantasy Regiments box set. It will be used as a 'Frostblade'. 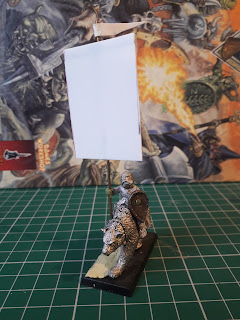 Standard Bearer.
This is a converted F7 Feudal Cavalry miniature, with a head swap from an F8 Viking/Norse miniature to make him look less Western and more 'Russian'. I have gone for a huge banner in the old 1980's style for the fun of it. 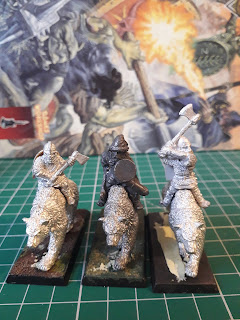 Boyars.
In the centre is a C01 Fighter 'Brigand' from 1985, and either side of him are two F8 Vikings/Norse. 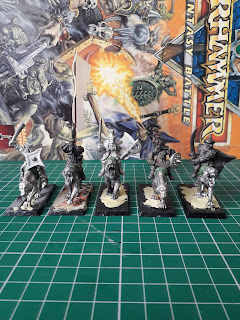 The Tiger Lords of Ind.
The Tigers are the EC04 Pan Tang ones from Citadel's Eternal Champion range.
I have sculpted saddles onto the tigers, but they are still a little WIP as I want to improve them.
With all of the Ind troops I have tried to select miniatures close to 14th to 19th century India as possible, but given the 1979-92 time frame, some of them might lean more to the Araby style, although some Indian warriors look did. 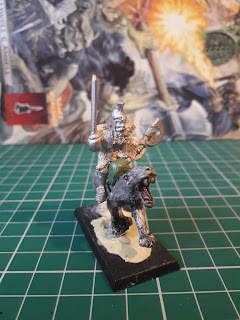 For the leader is chose another Pan Tang range miniature, Jagreen Lern. 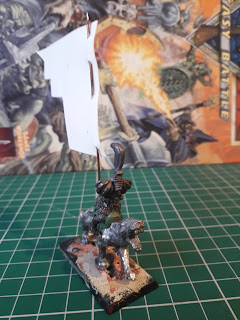 Standard Bearer.
He is a converted ME71 Corsair of Umbar. I have fixed the larger standard to the back of the saddle to rather than have the miniature holding it. I did this to keep the dynamic pose of the rider waving his sword over his head. 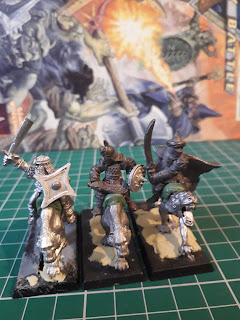 Tiger Lords.
From left to right, C13 Heroic Adventurer Luyt'Ama Rah'slyn; another ME71 Corsair, with an old Citadel metal shield; and a C01 pre-slotta Fighter. 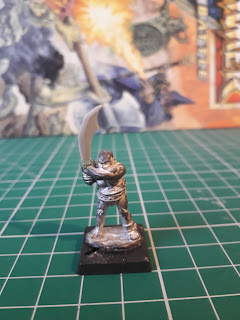 C32 Slann Slave.
This on had to top of his spear snapped off so I replaced it a spare Drastik Plastic scimitar blade to create a Eunuch Guard for my 3rd Edition Araby army. 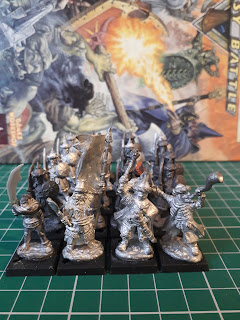 The above Eunuch will take the place of the rare Eunuch Champion in my RR6 Mad Mullah Aklan'ds Death Commandos Regiment of Renown. 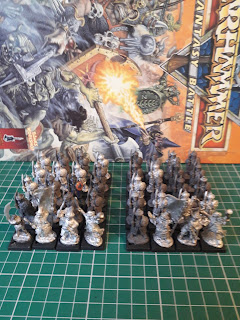 I actually have two Regiments of these. I don't have enough room in my Araby Army for them, so tone will go to the Ind army, the other to my Southlands army. 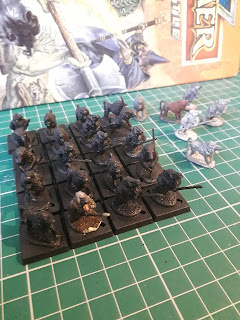 Baboons.
I have been collecting these on and off for a while. They are the Runequest and C22 Creatures range Baboons. 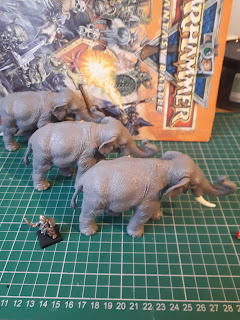 Elephants!
These are for use with my Ind army. I spent a little time to collecting the old style Brittains elephant which would have been the ones used in the 1980s. These, and the much larger African elephants (of which I also have a  a couple) were used in conversions at the time (usually with Orcs crewing). There is even a mention of them in the 1st Edition Forces of Fantasy book suggesting purchasing Brittains Elephants for 'Men of the east' armies. 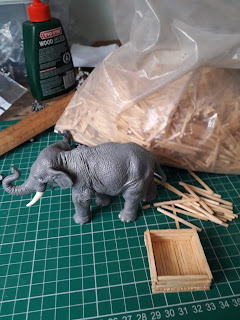 I have a big bag of model making matches and so I set about making a howdah. 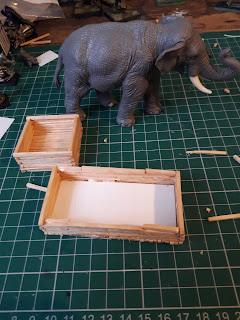 I added some plasti-card for added strength. 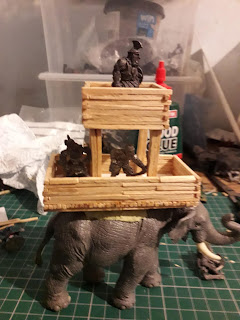 'Finished'.
Well, sort of finished as I intend to added more milliput to the elephant to create the cloth covering, and to the howdah to decorate it.

Next blog update should be the goblins, but I am getting distracted by other things a lot!
Posted by Goblin Lee at 11:32 6 comments: