After painting Agrat the Goblin Fanatic last month as test model I thought it would be good to start painting a Goblin regiment.

Over the last few months, years really, I have been sorting out my miniature collection into 3,000 point armies based on the lists in Warhammer Armies. Some of these armies are based on armies used in scenarios and sample army lists. One of these is the Orc and Goblin army used in the Warhammer Fantasy Battle 3rd Edition scenario 'The Valley of Death', found in White Dwarf #97, January 1988.

Without going in deep details (which I will do at a later date) the scenario consists of four armies, two Dwarf, one Orc, and one Goblin, all meeting up for a jolly good time (well, bloodbath really!) in a valley. Like all the Warhammer scenarios of the time the forces involved have a colourful back story and details.These armies were not designed to do anything other than be the forces involved in the scenario.

Now I have had the idea of converting many of these armies, some from 1st and 2nd Edition, into usable 3,000 point 3rd Edition armies. For many this isn't difficult, and only really requires the addition of a few extra troops or magical items. By combining the Orc and Goblin armies in this scenario straight from the pages, you end up with a 2,565 point army. I have been doing this for several armies, not just Orc and Goblin ones. So I am making a start with the Stuntie Spikers. If one is to start anywhere, I feel Goblins are the best place to start. :) 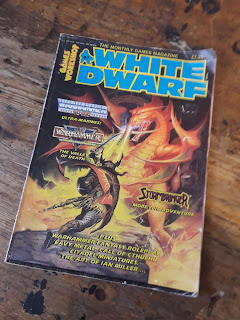 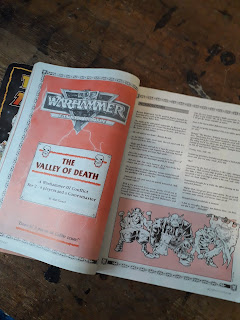 The Valley of Death. 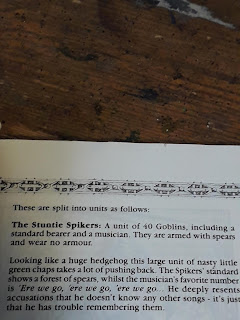 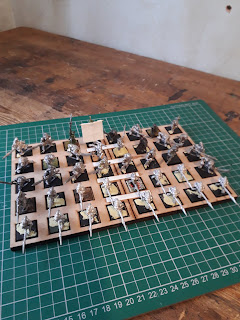 The 40 little Goblins themselves.
They are 40 Goblins with spears, but on armour. In order to keep the spikey/hedgehog look of the unit I have moved the Standard Bearer and Musician back into the middle/rear of the unit. In theory this negates their usefulness in the rules, but hopefully I would play someone who appreciates aesthetics over rules pedantry! 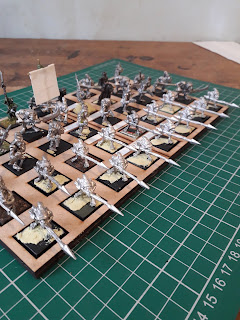 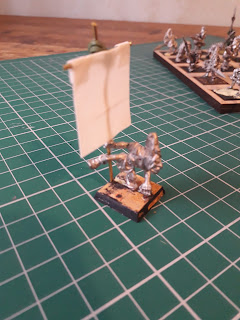 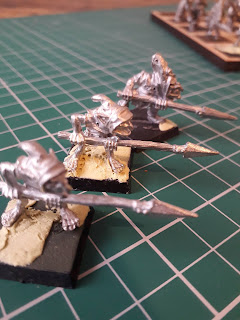 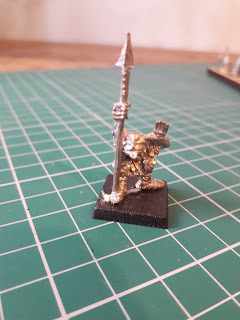 A very rude Goblin. :)
One of the Character in the scenario is a Goblin Hero named 'Zitpicker'. He has no specific miniature to represent him, but as he has light armour and spear, and he's a character model, I thought this Goblin would fit perfectly. 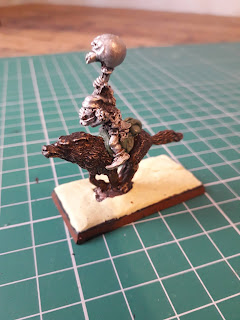 Another Goblin hero is 'Blackhead'.
Both he an 'Zitpicker' are known as the spot brothers, due to their awful complexions. Blackhead is mounted on a wolf, and so I thought I would make him look more characterful by mounting a normal wolf rider Goblin on a spare 1980s Lord of the Rings range Warg. He is a WIP, but I thought it would be nice to see him so far.

Next update will be Goblins!
Posted by Goblin Lee at 17:45 9 comments: