Aargh!
Another busy month with last minute blog update. I have'nt even done any painting! None the less, I have been collecting and sorting out armies. One of the armies I have finished (but not painted!) is my Citadel pre-slotta Fantasy Tribes Dwarf army.

I have been collecting the Goblins and Great Goblins for years (since I picked up some in a GW sale in 1989), but I only started collecting the Dwarfs a few years ago. My original idea was to base the miniatures on 30mm lipped round bases, just like I have done with the Great Goblins. However I decided to make a 'proper' looking army of them, something I have been doing with some of my other pre-slotta armies recently. This entailed re-basing some of them, including the pre-slotta version of Bugmans Rangers. I really love the FTD miniature range and think that they have a 'down to earth' quality which later ranges (Citadel and others) really fail to have.

The pre-slotta army is below. In addition, I have been assembling an army based on the McDeath scenario. In the scenario McDeath controls an army of Orcs and Goblins (and a Giant). So thought I would be fun to use the numbers of Orcs and Goblins in the scenario as a basis for an 3,000 point from the 3rd Edition Warhammer armies lists, and of course using only Oldhammer era miniatures. More on that in another update, but there are some WIP photographs at the end of this update. I am also assembling a similar opposing army from the Rebels facing McDeath. 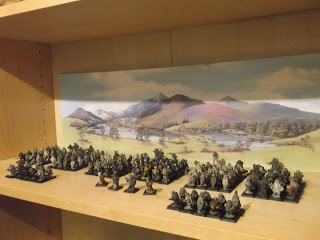 The army as a whole.
I can squeeze the miniatures into a 3,000 point army, but it would be better to have field the whole of them in 4,000+ points, allowing for more magic weapons, standards, etc, and maybe a Dragon or some Ogres. 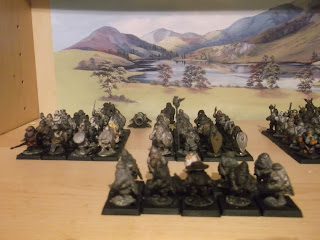 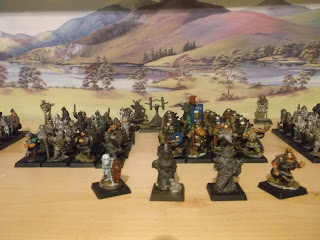 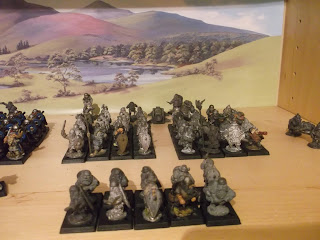 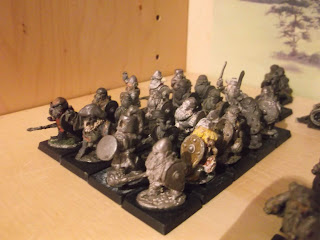 Spearmen unit, mainly consisting of FTD1 Dwarf with Spear and Sword. I need to convert the broken C06 range Dwarf Cleric into a standard bearer. 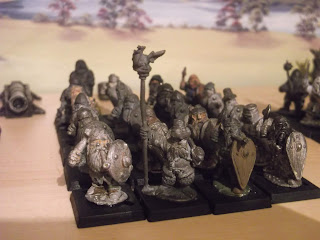 Dwarf warriors made up of FTD6 Dwarf with Axe and Hammer, and FTD7 Dwarf with Hammer and Pick, with an FTD8 Standard bearer with axe. 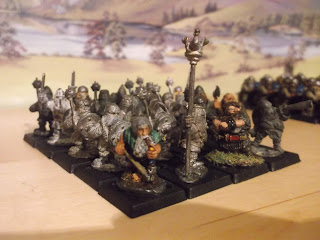 A regiment of FTD4 Dwarf with Axe and Mace, led by Drambuin from the 1983 Dungeon Adventures starter pack.
Some of these need repairing as the shafts of the axe/maces are quite fragile. 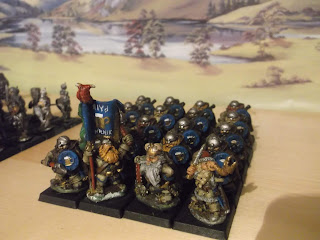 RR1 Bugman's Dwarf Rangers Regiment of Renown.
Although produced a little later that the FTD range, being made in 1984, the are contempary and fit nicely as an elite regiment for the army. These were originally based on 30mm lipped bases, but I have rebased them to fit with the army. 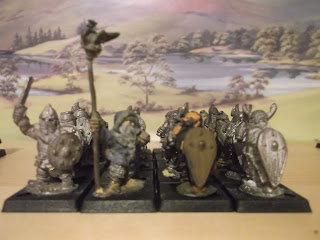 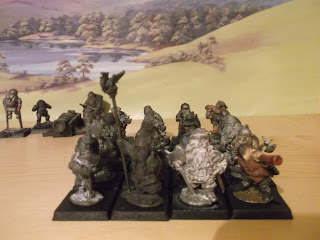 A regiment based on the FTD3 Dwarf Sword and Polearm. Like the FTD4, the shafts of the weapons are fragile, and a few require repairs.
The regiment is lead by the famous (and first incarnation of) The White Dwarf (code FS17, from the Fantasy Specials range). 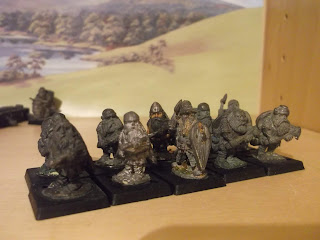 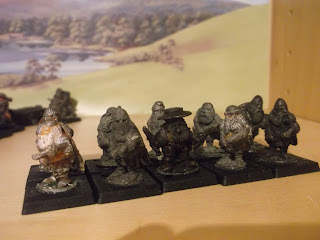 A second crossbow unit composed of FTD5 Dwarf with Axe and Heavy Crossbow, and FTD2 Dwarf with Light Crossbow, led by the FTD13 Dwarf with no name. Characters.
From left to right: FTS11 Dwarf Skeleton
with Axe and Shield (to be used as a bound Spectre); Queen Asabelle Dragonsmiter (and an unidentified cat) from the SS2 Dwarf Kings court box set; C06 Cleric; and Thorgrimm Brandedimm (Army General). 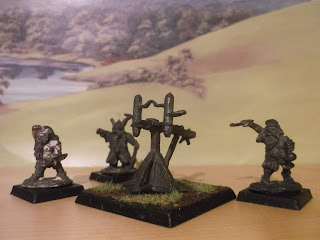 FTD16 Dwarf War Engine (on a reclaimed base). 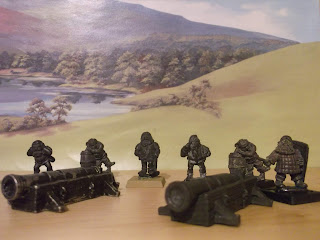 Two DS1 Dwarf Cannon.
I have two cannons, and all the five crew, plus one in addition. Seperating the crew into two groups of three allows them to be fielded as two 3-man cannons. 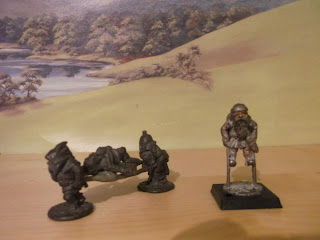 Random extras:
FTD14 Dwarf Stretcher Party.
WF5 Dwarf with Inferiority Complex (which I might use as a Bombardier). 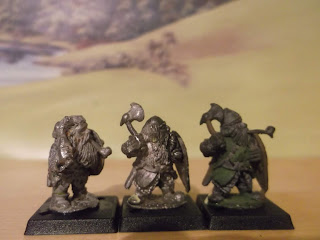 There seemed to be a lot of smoking in the FTD range of Dwarfs. Many of the Dwarfs are found smoking a variety of pipes. I think that it often give them a slightly German/Bavarian aspect. 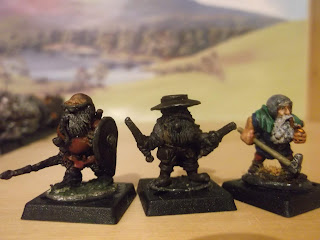 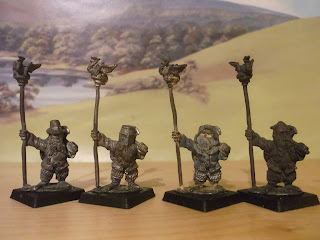 A selection of the FTD8 Standard bearer with axe. 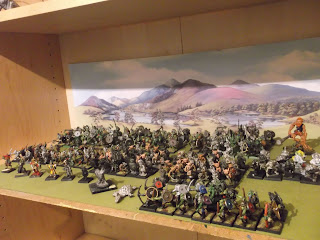 The army of McDeath! (WIP).
The idea is to assemble an army in the framwork of the 3rd Edition Warhammer Armies book using the forces at the disposal of McDeath during scenarios in the McDeath scenario pack, and the addtional 'Glen Woe' scenario.
Roughly this works out at 90 Orc Warriors, 15 Orc Archers, 12 Orc Crossbowmen; 40 Goblin Archers, and a Giant, not including the characters associated with McDeaths side. In addition, I have added some Goblin Warriors (Gobbos), the beastie of Lock Lorm, and a few Orcs/Goblins to top up units, and to make the army legal in a Warjhammer Armies lists.
More on this in a further update. 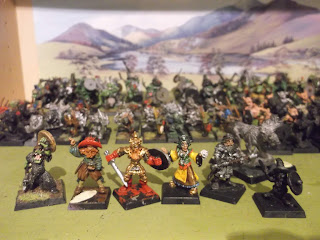 McDeath and Lady McDeath, with cronies.
I have no idea what my next blog update will be on. I'm kind of intriged to see what it will be! :)