More assembling and basing of the Traitor Legions, although I have finally started painting something again!

I have always been intrigued by the idea of mounted a Chaos Marine squad on vehicles, and not just upon the more ordinary jet bikes and chaos steeds. In the Slaves to Darkness book there is a section which details how one can mount entire squads on bike and sidecars, and on Land Speeders. I thought Land Speeders would be very Rogue trader, so I set about picking up the odd Land Speeder here and there over the years. Of course, doing this presents several problems.

Secondly is the points cost. Land Speeders are 200 points each. Six Land Speeders are therefore 1,200 points. Six Tech Marines (with Bolt Guns). One Tactical squad of Slaaneshi Marines (with the Sergeant upgraded with a  Power Glove) 168 points. The total for the whole squad therefore being 1,488 points. This is quite pricey, even for a Rogue Trader era squad, although as they are part of a larger 10,000 point Legion I think that some expensive squads such as this can be purchased as part of the larger whole, with cheaper units balancing out the Legion.

Finally, there is actually finding the Land Speeders. Not being 1988, it is more difficult to purchase some of the Rogue Trader era items now. On e-Bay Land Speeders are usually quite expensive, and so patience (and a little bit of tactically deployed disposable income) has been required, although I already owned three from 'back in the day'.

As an aside, Nico has constructed a lovely World Eater Land Speeder, as well several other World Eater items, and can be found on his blog below:
http://nico-realmsofchaos.blogspot.com/2020/11/world-eaters-landspeeder.html

*A note on my Traitor Legion organisation:
I am assembling the Traitor Legions in the style and manner of the Rogue Trader era. With this concept in mind I am making the assumption that the Iron Warriors and Alpha Legion are Slaaneshi Legions, and so I will base their army lists on the Emperor's Children list. Conversely, I shall base the Word Bearers and Night Lords on the Khornate World Eater list. The justification for doing this is the Traitor Legion illustration and artwork on pages 167 and 168 of the Slaves to Darkness book, which I have included in the blog below. I am also using the colour schemes mentioned here too for them. I think this adds a little bit of variety and fun. 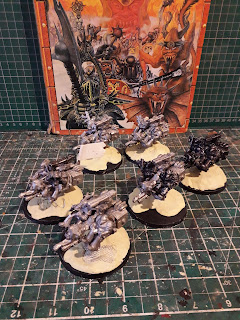 Land Speeder Squad, destined to be part of my Rogue Trader era Alpha Legion army.
I have based them on round 60mm Citadel plastic bases to give the more stability and I think they just look better bases. Throughout the squad I have kept a mix of the old Mark VI crew, and mixed in a few of the mounted Renegade miniatures to give that Traitor Legion feel. 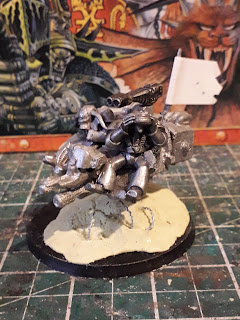 Sergeants Land Speeder.
For the driver I have used a loyalist Mark VI bike crewman with the goggles. I had to bend the legs together and remove the bolt pistol on his right leg to make him fit onto the seat. 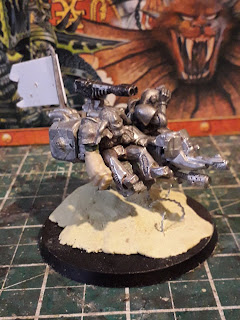 Sergeants Land Speeder, right hand view.
I have replaced both of the crew. For the sergeant I have used one of the mounted Renegades legs and body, but have replaced the bolt gun with a plastic RTB01 Power Gloves. I had to bend the legs a little to make him fit onto the seat. 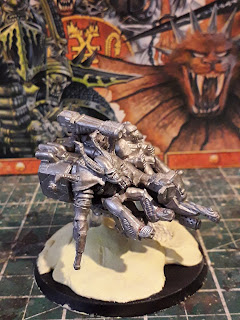 Land Speeder with a Bloodletter Renegade head. Although this will be a Slaaneshi Legion squad, I find that some of the renegade miniatures are interchangeable between Chaos Powers. This one looks very H.R.Giger inspired anyway, so I'm not too concerned. 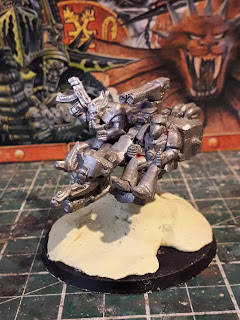 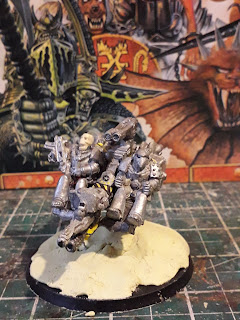 A head swap for this original Mark VI crewman. I was going to use a horse skull, but I have already converted a couple of miniatures with those already, so thought I would try a human skull instead. 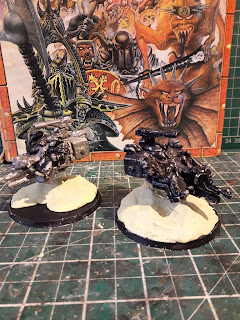 The final pair of Land Speeders, still with their original Mark VI crew. 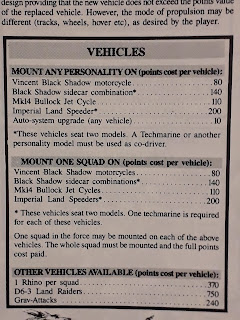 The Slaves to Darkness army list entry for mounting personalties and squads on vehicles. 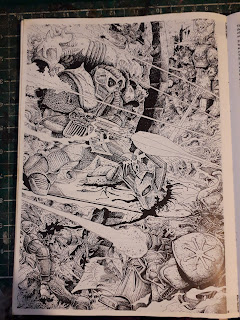 The artwork of a hover board riding Renegade on page 258 of Slaves to Darkness... 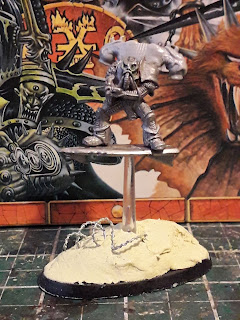 ...which inspired me with the idea of creating it. The artwork already matched a Renegade miniature, albeit facing left instead of right. So I picked up a Citadel Judge Dredd range hover board and here is the miniature. Not really much of a conversion, but a nice idea. He will end up with the Alpha Legion as well. 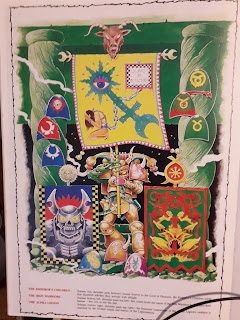 Page 167 of Slaves to Darkness. This illustration, and the entry below it, detail the Slaaneshi Legions, with the names of the Legions, banners, armour colours, and a little background. It suggests that the Alpha Legion wear green armour (maybe with some red trim), whilst the Iron Warriors wear a mid blue, and the Emperor's Children a mix of colours (also detailed in the rest of the book). I will be paint the Legion like this as they meant to be in the 1988 to 1991 approach, rather than how the Traitor Legions colour schemes evolved in the background over the years since. I will do a blog update about my approach to all the Legions at a later date.

Next update will be more Traitor Legion stuff, and maybe even with some painted! 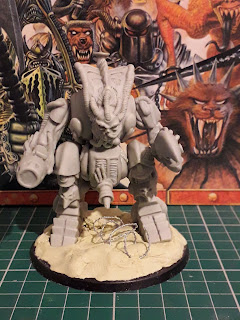 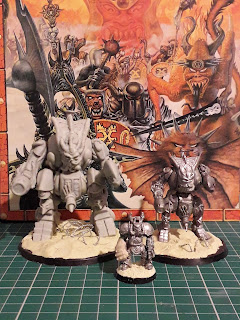 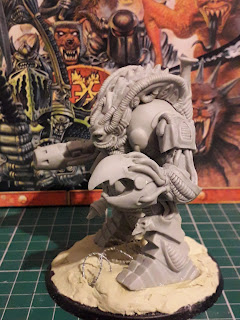 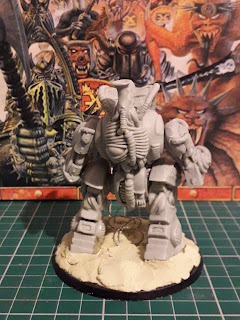 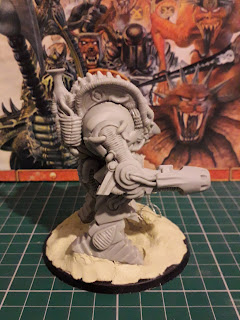 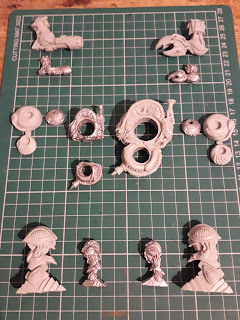 Next update will be more basing and showcasing of the Chaos Legions. I am still not getting around to any painting at the moment (I'm still renovating the house and working), but I am basing up a lot of Chaos Legionaries. Last week I based scores of Chaos Daemons, and the week before over 100 Rogue Trader era Chaos Terminators. This week I am working through their less armoured Power Armoured brethren, as well as Jet Bikes/Cycles, and Chaos Steeds.
Posted by Goblin Lee at 19:27 13 comments: