I have finally painted the last part of the Squats of Hylgar's Hellraiser: The Thudd Guns.

They were quick and fun to paint. I have always considered the Thudd Gun to be an iconic Squat weapon, and so they really had to be included, especially as they are allowed in the army list anyway.

In addition to the two Thudd Guns, I have included the alternative Thudd Gun, also released as the Imperial Guard Auto-Cannon. This was produced in France under license from Citadel by AGMAT, and is sometimes known as the AGMAT Gun.

To crew the guns I have added a few of the Squats from the wider early Rogue Trader Squat range as the Thudd Gun was only supplied with one crew, and the AGMAT with none. 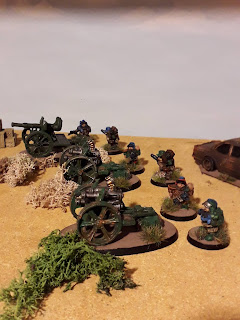 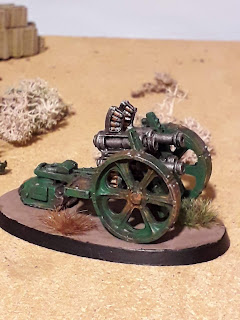 Thudd gun.
I added some of the rust effect to the gun to give it a slightly more battlefield feel. 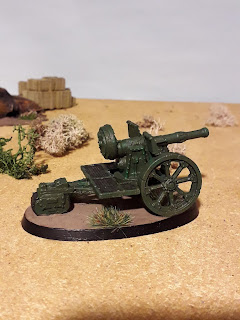 The AGMAT gun.
The rear track and the wheels are the same as the regular Thudd Gun, but that is all. The overall look is the same, and the chasis looks like a conversion ofthe original, but the addtion of a larger intergral footplate renders it different.
I think it looks fine and fits in nicely, and faintly reminds me of late 19th Century and First World War artillery. 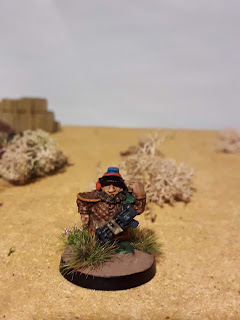 Squat gunner.
This is the Squat supplied with the gun. He has a peg under his foot rather than a slotta base so he can be placed on the Thudd Gun itself. I chose not to do this, and filled in the gaps on the Thudd Guns footplates with greenstuff. 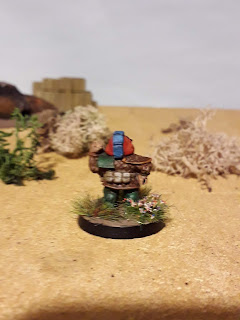 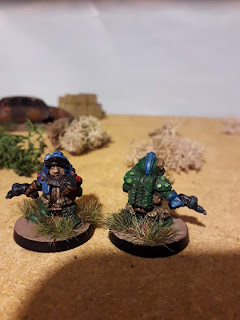 RT301 Squat "Blish" Browning".
I think he makes a good alternative crewman as he is holding a comm unit/control pad. 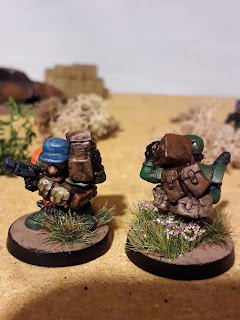 RT303 Squat 'Loader Grigg'.
He is part of the Squat  Heavy Weapon range, and seems to be designed to be an ammo carrier, which I also thinks works well as an alternate crewman.

For a variety of reasons this Squat project has taken more time than expected to complete, and my blogging has been very low key. It was, however, fun to paint them, and in the manner and 'feel' of the early Rogue Trader era from which they derive.

My plan now is to switch focus to what I have been doing in the background for over a year.
I have been sorting through my Warhammer Fantasy collections and organising them in 3,000 point armys based on the army list from the 1988 Warhammer Armies book. By and large this has meant sorting a LOT of miniatures into boxes, and so over the next few weeks I will be writing army lists for them. There is a lot of unpainted lead (and a little plastic) at the moment, but once sorted I can then focus on painting again, and then blogging the progress. :)
Posted by Goblin Lee at 19:52 4 comments: