More Rogue Trader era Slaves to Darkness conversions, this time based on the artwork for the Black Legion army list officers.

One of the many lovely things about the old Slaves to Darkness book is the artwork. Anyone who has looked through the book will have noticed many of the illustrations are similar to many of the miniatures which Citadel produced at the time. In the case of the 40k sections of the book, some of the artwork is linked to Citadel's 40k miniatures range.

One of the armies I am assembling is a Horus Heresy era Sons of Horus army using the Black Legion army list provided in Slaves to Darkness. However, looking at the army list entries I noticed that some of the lower ranking officers artwork was not based on 40k miniatures, but fantasy ones.

So I decided to see if I could match the fantasy miniatures to the 40k illustrations in the list. I did this easily by looking through the late 1980s Chaos Warrior ranges and finding the right miniatures. The main determining factor were the heads, matching the style of the helmets to miniatures with the same helmet in the illustration. After that, I just converted the miniatures, removing fantasy weapons, adding chaos backpacks and bolt guns, and swapping an arm in one instance. I have not gone for 100% conversions, but close. With the same helmets in the artwork and on the miniatures, I think the end result ties the two in nicely. 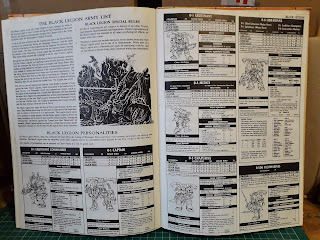 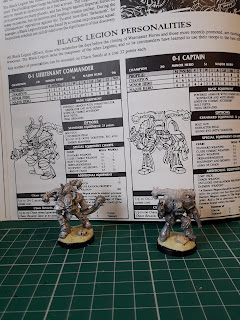 Lieutenant Commander and Captain.
Both of these officers artwork are actually based on two Chaos Renegade miniatures, so these were easy to replicate, with no conversions, just a few bits added to milliput enhanced bases. 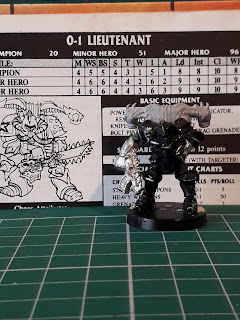 Lieutenant.
This officer was a Chaos Warrior originally holding a halberd. I had a spare Chaos renegade arm, and so just swapped the arms over, and removed the shield boss from the left arm. I was originally going to do a head swap with another Chaos Renegade miniature which has a similar bolt gun with chain blade in the illustration. However the angle of the Chaos Warriors head and left arm meant that it might be damaged too much if I tried. 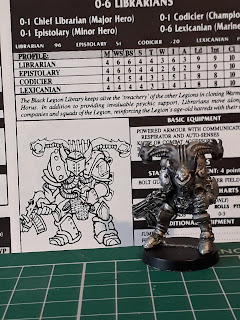 Librarian.
Simple weapon swap and addition of a chaos backpack. 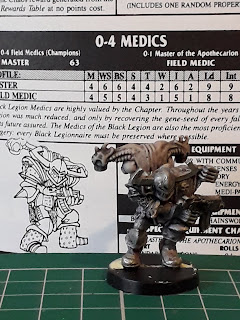 Medic
Again another weapon swap and addition of chaos backpack. I love the squared off looking horns on the helmet. 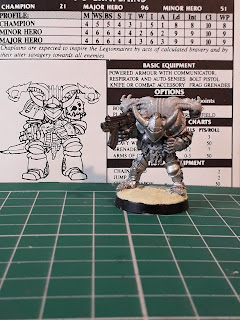 Chaplain.
Weapon swap and backpack. I might add a blade to the bolt gun from the RTB01 Space Marines box set (which is where the bolt gun came from) at a later date. 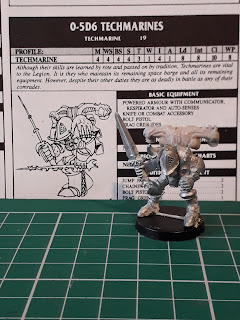 Techmarine.
This a Slaaneshi Chaos Warrior miniature. I just added the backpack and removed the shield boss. I was going to remove the sword and add Spawn-goads to each hand, as per the illustration. However, I like the sword too much, and you can equip Techmarine with Chaos Weapons (well, the Chaos ones anyway!). So it stayed.

Next update will be more conversions. I've been converting heavy weapon troopers and Sergeants, amongst other things.
Posted by Goblin Lee at 18:50 12 comments: