Continuing with my grand sorting out of my Rogue Trader era Horus Heresy miniatures, I have been converting a few as a I go. 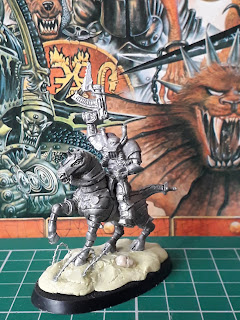 Chaos Renegade officer mounted on a Chaos Steed.
Personalities in the Slaves to Darkness Black Legion Army list are allowed to be mounted on Chaos Steeds for 32 points. I had a spare C13 range horse used for the Jaek and Helwud miniatures, and thought it would fit the miniature nicely. 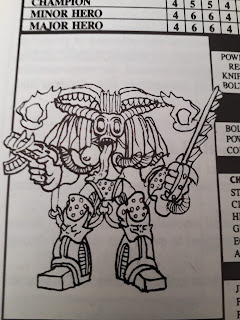 The Emperors Children Lieutenant Commander illustration is similar to a Slaaneshi renegade which was produced at the time. I can never be sure if the miniatures were inspired by the artwork, or visa versa, although I recall reading somewhere (sorry, can't remember where!) that it was often a bit of both. 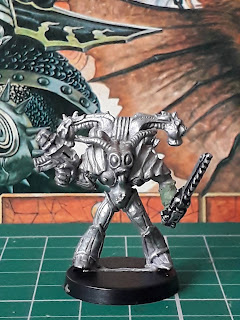 So, I decided to convert up the Slaaneshi miniature to fit. It only required a hand swap and drilling/pinning, but it's a nice idea. I am planning to use the miniatures which are similar to the illustrations for all of the officers of the three army lists included in Slaves to Darkness. Several of the Black Legion ones are based on Chaos Warrior miniatures which I have and will convert up soon. 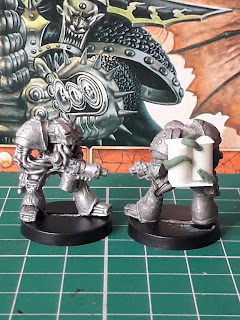 Flamers!
Although I have a lot of Chaos Backpacks, I want to make sure that not only I don't run out, but that I can use any spare ones on regular Mark VI Marines in order to 'Chaos' them. In addition, I think it would be nice to break up the look of all of the backpacks with other things. In that vein, I have taken the flamer miniature on the left, and modelled a few fuel tubes on the backs of them. I could have just used modern GW ones, but I wanted to keep with that old school style. 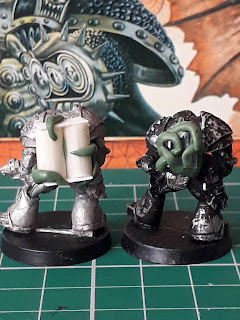 Two more flamer marines.
The fuel tanks are made from bits of old tube and plasti-card. I have green stuffed some tentacles over them to make it look less bare, and to fit in with the tentacled look of the miniature. 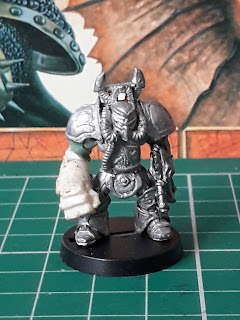 LE101 Chaos Renegade Marine.
I purchased himfrom e-Bay, with his tentacled arm missing. So I added a RT01 Space Marine Power Fist instead. He needs a backpack glueing on, which I forgot to do. 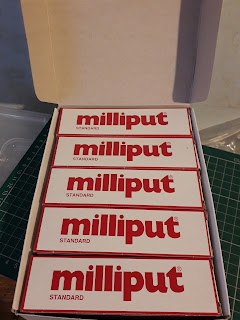 Milliput!!!
I am going to require a lot of milliput for bases, and someone was selling a whole case for £28. That's 10 packs! LOL

Next update will be more conversions and basing. I am not getting around to painting at the moment, so contenting myself with organising, basing, and converting. I am also renovating the house, so that (and work) is taking a lot of my time!
Posted by Goblin Lee at 19:37 9 comments:

I'm still not getting around to any painting, but I am spending some spare time sorting things out. I have so many different things to do, but I keep being drawn back to Rogue Trader era Horus Heresy. I did start on this a few years ago (2015 to 2016!), but a series of painting problems and other distractions moved my attention away.

I now want to make a serious effort to sort out what is an immense project and one which will take time just to sort out the miniatures. The armies involved will be Ultramarines for the loyalists, as they seem the classic Rogue Trader era Horus Heresy Imperial forces from the artwork of the time, and the blue is nice. They will be organised using the standard Spaced Marine list from the time.
For the forces of Horus, I will be fielding an army of each of the three army lists in Slaves to Darkness (with the Black Legion being painted in their Sons of Horus colours), and two armies from the two Renegade lists in The Lost and the Damned. But more on this at a later date.

For now I have been paint stripping and reassembling my Dreadnoughts. The Ultramarines will be able to field eight Dreadnoughts, consisting of three Contemptor (Chuck) Class, three Furibundus (Fury), and two Deredeo (Eddy).
The Traitor Legions have four of the old metal Dreadnoughts, and one large plastic Chaos Dreadnought from Space Crusade. I have rebased all the Dreadnoughts on 60mm round bases as I think it looks better, gives them more room, and actually gives them more of a battlefield presence. 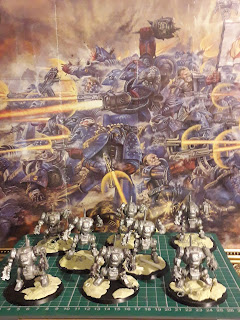 Eight Imperial Dreadnoughts.
I have added some milliput to the bases to make it look more like a battlefield and less like a bowling green. 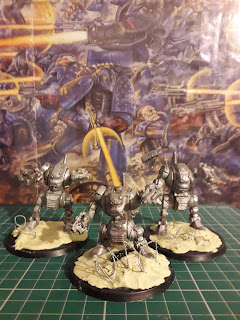 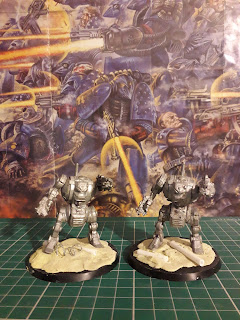 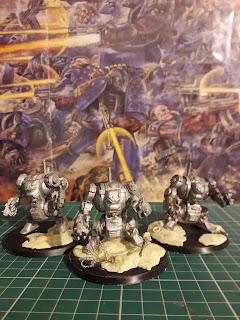 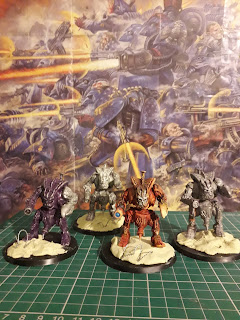 Four Chaos Dreadnoughts.
One of them I have already painted for my World Eaters some years ago. 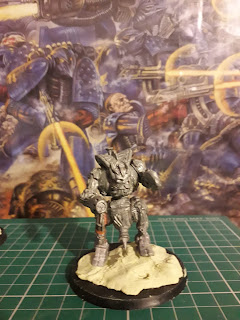 I re-positioned this Chaos Dreadnought to give it a look of hunting its prey. 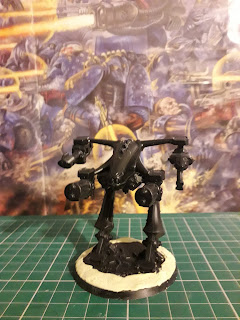 Chaos Dreadnought from Space Crusade.
I wanted one of these for the fun of having one. Its pretty large and armed very differently from the other Dreadnoughts, but I will probably use it as a 'counts as'  a Chaos Furibundus. 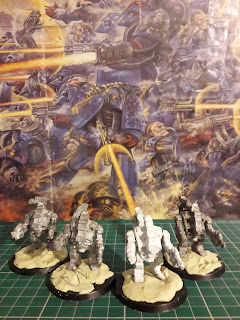 I also paint stripped, reassembled and rebased my Cataphract  Robot Maniple. These are on 50mm round bases. 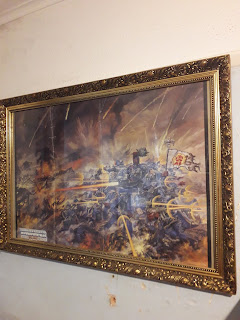 In addition to all that, I have finally got around to framing my old 1987 Rogue Trader poster. I had this on my wall for years after buying it in a now long gone model shop in Worthing named 'The Crazy Dwarf'. The poster has spent the last 25+ years folded up in a box.
I need to tinker a bit with the frame, I need to put some black edging on the sides of the poster.
I discussed this poster, and another 1980s poster, in a blog update a few years ago:
http://goblinlee.blogspot.com/2015/10/1980s-warhammer-posters.html 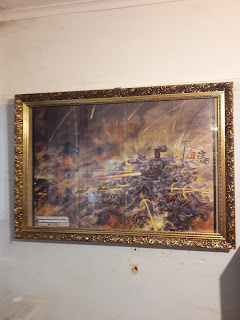 Another view. It is currently handing in the spare room where my painting table is. I am renovating the house, so the wall is a bit of a mess!

The next update might just be some painted miniatures finally!
...or maybe something I've glued together again (not my fingers though!).
Posted by Goblin Lee at 19:35 6 comments: