..an arcane Daemon from an earlier age...

I'm still not getting enough time to do some serious painting, but I have been sorting through miniatures, and decided to paint an old Daemon which has been lurking in the shadows of my windowsill: Golgoth, Lord of Balrogs.

Golgoth is a Greater Demon miniature from Citadel, released in 1984 as part of Tony Ackland's Arcane Monstrosities range. The range was released in 1984 (the Orc Catapult released in 1983), and was largely sculpted by Tony Ackland, although Chas Elliot sculpted the Chaos Battering Ram. Golgoth was only released for a few years before being replaced by the TA1 A-Angor Demon King.

The miniature itself, well, isn't miniatures really! Just like the rest of the range, he is quite large (the clue to this is in the ranges title really) being 13cm long, 8cm tall, and 10cm wide. Being made of the old lead mix he is quite heavy. The advert (see below) had the old 'For advanced modellers only' symbol on it, and whilst it's is not complicated to assemble in itself, drilling and pinning of the wings is advisable. The sculpting is very much what you would expect of the time, being good and full of character, but not as crisp as perhaps the contemporary GW miniatures. This is something I don't have a problem with.

When it came to painting I wanted Golgoth to have a dark aspect of the shadows. It would have been easy to just paint him black, but that would have been too flat. After a black undercoat, I lightly dry brushed more prominent areas in a mid red, and then less so with orange. I didn't want Golgoth to look too red, is was just to stop him from looking too flat by bringing out some of the detail. It was a very basic paint job, but something which I wanted to do. I didn't want an overcomplicated look to keep in with the idea of him from shadows. In the same vein, I kept his eyes, mouth, and claws black, to suggest a creature of the abyss rather than burning infernal flames of Hell. 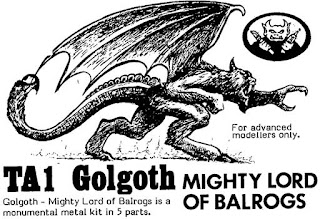 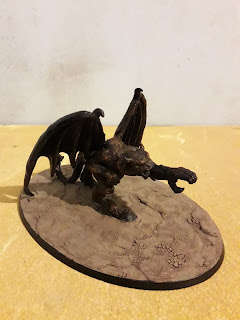 Golgoth advancing.
I have kept the base basic and plain for the time being, only painting on the Citadel Agrellan Earth. This is because Golgoth will end up as part of one of the Slaves to Darkness Daemon Legions, and I haven't quite decided on how to decorate the bases yet. 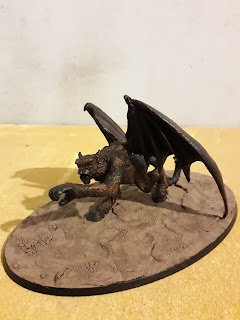 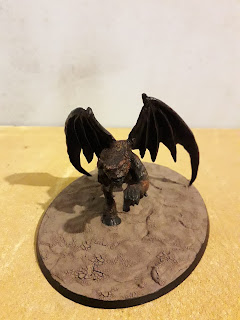 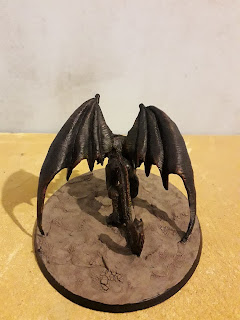 Rear view.
Look at the size of the solid lead wings! 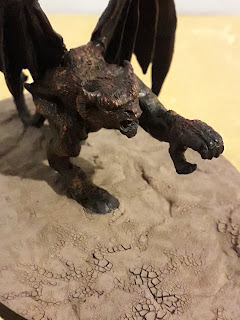 Head details.
I think he has a slightly cat look to him. 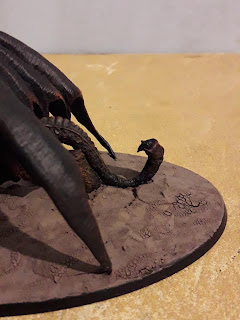 Tail detail.
It looks a little like a scorpion tail. 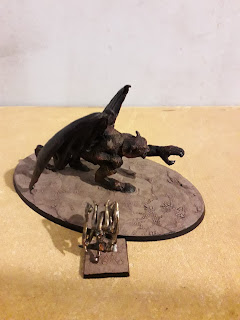 Scale photograph, with a Citadel Bloodletter on a 25mm square base for comparison.

Next update might be some Chaos Renegades, as I have been sorting through those, as well as my Daemon Legions.
Posted by Goblin Lee at 17:32 10 comments: