I've been putting off this blog post for a couple of weeks. It's an unhappy post. On the February 28th a good friend of mine, Justin Coutange died. He had been ill for a little while with a brain tumour, but his sudden death took all who knew him by surprise.

Many people in the 'Oldhammer' and gaming community knew him via his blog, The Masterworkguild. Although he had'nt blogged for a while, his collecting, painting, and contributions to the Oldhammer Facebook Group were well known. For those interested, his blog can be found here:
http://themasterworkguild.blogspot.com

I had known Justin for a long, long while, 32 years in fact. We first met at school, Shoreham College in West Sussex, when he was 14 and I was 13 years old, back in 1987. We both collected the ESCI 20mm plastic Napoleonics, inspired by the 1970 film Waterloo. We also collected fantasy miniatures. He had a few Wood Elves, and I Undead and Goblins, amongst other things. We hang out at school, and started gaming with hotpotch armies on his mothers living room floor (much to her disapproval!), or dining room table (even more so!). When I set up my table at home, we gamed there on a table of artifical Greengrocers plastic grass (my parents were Greengrocers) and rocks.

The first battles were messy affairs. Rarely did we finish a game, or if we did it was usually a bloodbath. By this time, late 1987 onwards it was 3rd Edition Warhammer. With the release of Warhammer Armies in 1988 armies and battles took better shape. I usually fielded Slann, sometimes Dark Elves, or Orcs and Goblins. Justin always opposed me with his Wood Elves. His mother disapproved of his gaming, and he had little time or money to spend on his army at first. I, by contrast had a part time job from the age of 13, and parents who did'nt really care what I spent my money on.

...and so we gamed, painted, and lived through the arguably the  'Golden Age' Warhammer.

Games Workshop Brighton opened in 1989, so we hang there, or gamed at our parents houses. Justin was never really taken with Warhammer 40k. Fantasy Battle was his love, and Wood Elves his passion. When he went to Uni, we stored his collection at my parents home as his mother did'nt want the clutter, and in the holidays we sat painting in the summer sunshine.

When we were older, we still kept in touch. Neither of us were impressed with 4th Edition Warhammer, or the following Editions. We looked into other games and manufacturers, and returned to 3rd edition Warhammer, and to Napoleonics. In fact, two weeks before he died he sent me a copy of General d'Armee. Deep in his heart he still longed to defeat Wellington. Strange considering his ancestors were disinherited by the revolution of 1789.

In later years we met up less. We didn't game much, but chatted and kept in touch. His job and family, and my work kept us in contact but not always in the same place. Blogging and Facebook kept us closer and that 'Golden era' alive. We had both diversified our collections, Justin spent time on Orcs and Goblins, and Undead, amongst other things. Some years ago we had a last hurrah as it turned out, with a two day 5,000 point 3rd Edition game. Our classic match up: Wood Elves vs Slann. The battle reports can be found here:
http://goblinlee.blogspot.com/2014/09/the-battle-at-tower-or-trouble-at-mill.html
and
http://goblinlee.blogspot.com/2014/09/the-battle-at-tower-or-trouble-at-mill_24.html

Sadly, we did'nt stage another of our epic battles. In the 'old days' 5, 6, 7, or 8, point battles took place. But alas no records of those epic stuggles remain (we even conducted a siege!). Life, and now death has got in the way of that. Time can do that.

Many people will remember Justin for his contributions to 'Oldhammer', for his sculpting, especially  his great Undead Ogre sculpt, and as a nice person.  He was much more than that, but for those he knew in the gaming world, I think that's a good way to remember him.
For me, he was my friend. 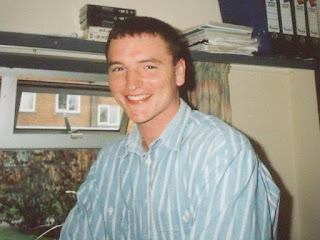 Justin as I always remember him. I think he's in his 20's here. 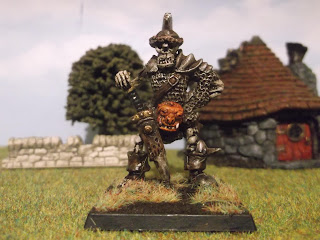 Justin's famous sculpt of the Undead Ogre. It was meant to be an undead version sculpt of Jes Goodwins famous C23 Ogre Hrothyogg.
He sent me one for free. 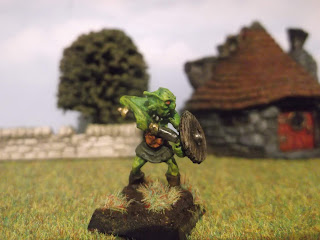 The Goblinlee.
Not many people are aware but he sculpted a Goblin, and sent me five of the casts.
Why the Goblinlee Goblin?  Look two photographs down... 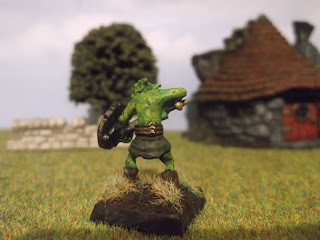 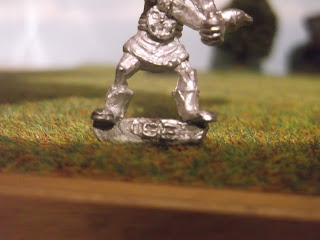 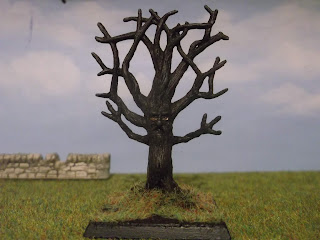 The Grenadier Treeman.
Why?
Well this was Justin's first Treeman miniature he ever bought . He never liked it, but I did. Years later, in about 2000 and something I saw a paint stripped one for sale on e-bay. Hmm, I thought. I have'nt seen one of those for sale before. I always liked Justin's, so I purchased it. It turned out it was Justin selling his old Treeman, and I bought it without knowing he had been selling!
Posted by Goblin Lee at 21:44 17 comments: