I've been a busy Goblin over the last couple of weeks.

Not only have I been sorting out hundreds of Rogue Trader era Chaos Renegades, but I have started, and finished, painting the first of the Chaos Powers Detachments: The Death Guard, servants of Nurgle. In additon I have made a new board for photographing, and made a start on the World Eaters.

Now admittedly the Death Guard are the smallest of my Traitor Legion Detachments, consisting of seven Squads of 5 Chaos Marines, one Dreadnought, and twenty one bases of Nurglings (I did'nt paint the Beast of Nurgle as it's not in the 40k list). However I'm pleased to have got them done and to be able to move onto the one the other larger Detachments, The World Eaters of Khorne.

I do have elements I would like to add to the Death Guard at a later date. I want to add two squads of Nurgle Terminators which I still need to buy. I do have 10 Chaos Squats, and a couple of Rhinos I want to add, but for now I am happy to move onto the World Eaters. I plan to go back an paint all of the tanks once I have painted all of the detachments, and the Nurgle Terminators once I buy them.

I painted the Death Guard armour similar to the old Rogue Trader style. They are an off white to green shade of armour, with red trim. I kept the red trim just to the shoulder pads to avoid too much red, and the off white to Green armour more grey-green ( I used Vallejo Grey Green in fact), with a highlight of Vallejo Stone Grey. I wanted to avoid an over mucky look to them as I wanted them to still retain some look of Marines, albiet much darker and plague ridden. With that in mind I painted the tubes on the armour in Tin Bitz to offset the armour, and added a black paint wash to the whole miniature.

Basing wise I went for a desert base. I will be basing all of the Tratior Legions in this way for two reasons. Firstly, for some reason when I think of Rogue Trader I think of them fighting in desolate desert planets. In addtion I always loved the look of the battelfield used in the 'Slaves to Darkness' photographs, so I feel it fits them well. Secondly the lighter sandy base lightens up the look of the miniatures, stopping them from looking too dark. It also means that I can decorate the bases or leave them as blank as I want without having to add static grass for the sake of it. I have added 'The Army Painter' 's  'Wastland Tufts' to the bases to suggest hardly plants, and to break up the bland plain sand look. 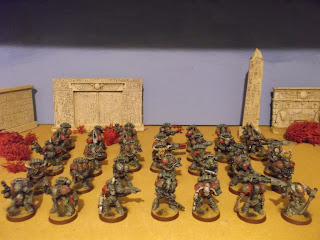 35 Death Guard Marines, ready to roll [Nurgle's] rot!
(on my new snazzy desert board. I will be making some better scenery in a 'Slaves to Darkness' vein, but have used my old Tomb Kings stuff for the time being).

As per the army list in The Lost and the Damned' the Marines are organised into squads of five.
It's an open ended army list, so I chose to limit myself to seven squads, seven being the sacred number of Nurgle.
As well as adding the specific Nurgle Renegade miniatures, and some generic Renegades Miniatures, I added a few normal pace Marine Armour Variants as I felt that the tubes and look of them worked well for the Death Guard.
The only Nurgle Renegade I did'nt use was the one armed with a flamer. He does'nt look very Nurgle-esque, and I have used all the ones I have in the Emperor's Children Tactical Squads. 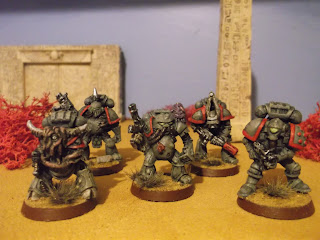 First squad.
They are lead by a Renegade with a Power Fist and pet Nurgling. To the right is a Space Marine Armour Variant. At the rear to the left of the photograph is one of Jes Goodwins Death Guard Chaos Space Marine concept miniatures from 1990. 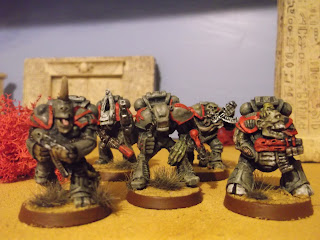 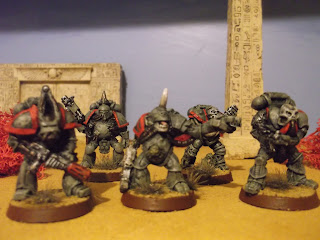 Squad Three.
Sorry about the blurred image, I have a better photograph further down in the blog of the squad leader. 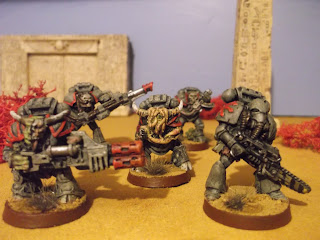 Squad Four.
On the left is the only Nurgle specific heavy weapon trooper, armed here with the Renegade Mutli Melta.
The miniature to the fore on the right is, to knowlage, the first ever Traitor Marine, being released as a 'Treacher Marine' in March/April 1988, just before the LE101 Chaos Renegade Marine. 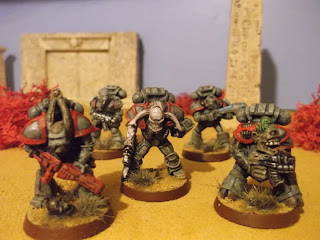 Squad five.
Lurking at the back on the left is another armour variant, and on the right a 'Death Eagle Marine' with Plasma gun. 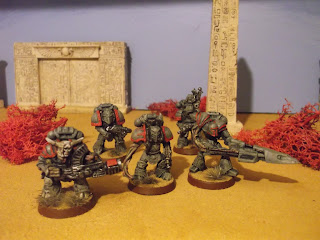 Squad six.
This squad is armed with two heavy weapons, a Missile Launcher and a Grenade Launcher. Chaos Grenade Launchers were provided in the Chaos Renegades packs, but if following the army lists, you were only able to use them in the 'Lost and the Damned' armies or as a lucky Heavy Weapons roll for a character.
I think the combination in gaming terms will allow for sone great anti-personel capability, whilst the Missile Launcher can switch to vehicle duties.
On the rear left is another armour variant, a Mark 3 Armour, which I think suits the Death Guard well. 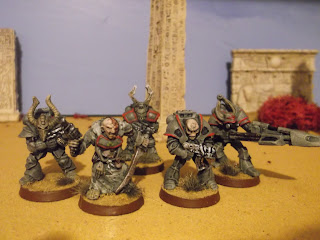 Squad seven.
I have used a Nurgle Champion with tech-pistol from the Fantasy range as the squad leader.
The Renegade on the left foreground is a Slaaneshi Marine, who should have a Rune of Slaanesh on his shoulder, but it was missing when I bought him second hand, and so I thought he might work as a Nurgle follower given his skull head. 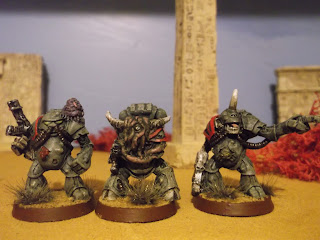 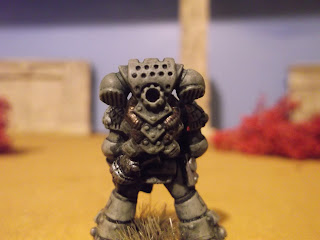 Death Guard Backpack.
I gave the Nurgle Marines a different backpack to other Chaos Legions. Instead of the normal Chaos backpack I aded the backpack used by Rogue Trader era loyal Space Marines in Mark 7/8 armour.
I did this for two reaons. Firsly I liked the idea of the tubes on the back, giving the a slightly different look to the Nurgle Marines. Secondly I was running short of the orginal Chaos backpacks. Chaos Dreadnought.
He fits the look of the Death Guard feel, and I painted him up as bacisally a large Marine. 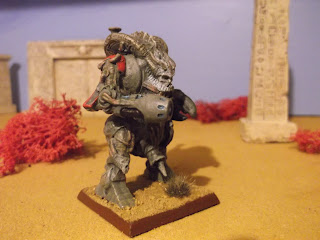 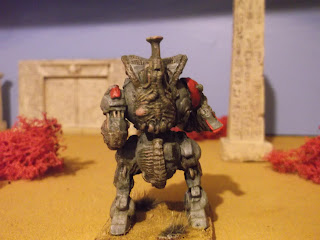 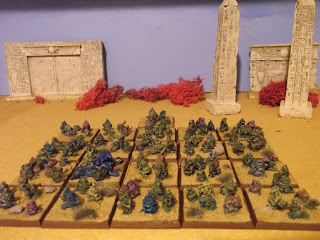 Nurglings!!!
I had 96 Nurglings, and so decided to base them onto 21 bases (three lots of Nurgle's sacred number seven).
I have added 4 or 5 Nurglings to each base.
Painting wise I painted them all a base green, with a few grey, purple, blue and yellow ones.  I wanted to give the Nurglings a mix of colours, without being too grimey or bright. 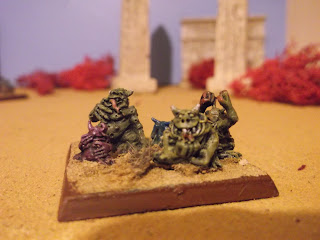 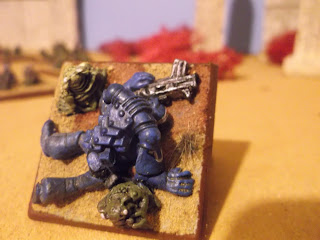 I added a dead Rogue Trader era Ultramarine to one of the bases to Nurglings as decoration. 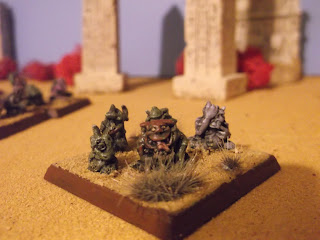 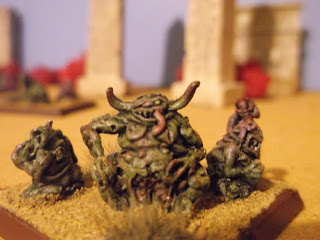 To this base of Nurglings I added an Epic Miniatures Great Unclean One I had . 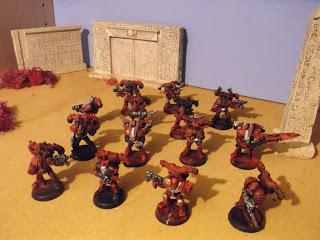 +++Sneak Peek+++
I had painted the Nurgle Death by the start of the week, and so started on the Khornate World Eaters.
More on these next update...


Next blog update will be World Eaters!!!!!!
I will be doing an update soon on some lovely Goblins after that :)
Posted by Goblin Lee at 21:30