This week I have painted the Balgorg, an old Citadel Greater Demon released in 1988 as part of the C31 Giant Monsters range. I have had a little break from blogging as I have been conducting my ongoing sorting out of my 1980's miniatures into armies, and also been ill with the flu.

Now by 1988 the 'C-series' listings were coming to an end, with the serial number listing taking over, but the Balgorg was listed in the C31 Giant Monsters range. The Balgorg himself is a Greater Demon (Demon, not Deamon) and is, I would suggest, based on the Balrog idea from the Lord of the Rings. In Warhammer Fantasy Battle 3rd Edition, it was possible to summon Greater Demons via 4th Level Demonic Magic, making this miniature perfectly practical for gaming.

The info next to the advert suggests that the miniature is good not just for gaming, but of such a good quality for collectors and painters. Although there is nothing exceptional in the sculpting, it is still a lovely sculpt from Trisha Morrison (soon to be co-founder of Marauder Miniatures), and part of the great sculpting from the era. There is not a lot of fine detail, but the nature of the miniature does not allow for that. Personally I think the the miniature is a beautiful and looks like what it is meant to.

I painted the Balgorg in the style of the Lord of the Rings Balrog. I opted for a dark colour. I undercoated the miniature black, and highlighted it with red. The 'hairy' parts of the model I painted to suggest flames, as I did with the sword and whip. All in all, I am happy with the model and how it turned out. A simple but effective paint. 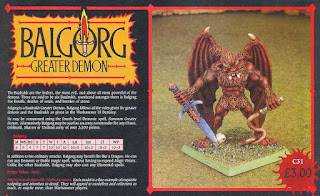 The original White Dwarf Advert from White Dwarf #97, 1988.
I am not sure, but I do not think that the miniature was a very widely released. 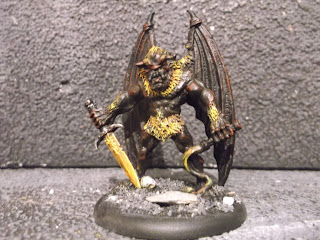 My take on the Balgorg. I have based him on a 50mm round lipped base. 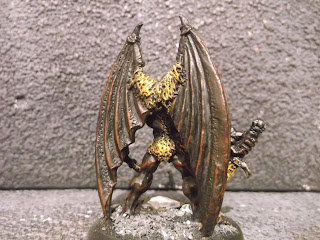 Rear view.
The model is a two part miniature. The wings are seperate to the body. 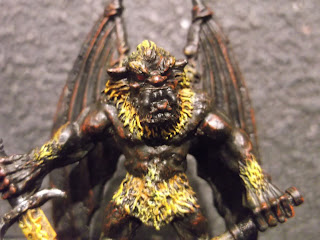 Close up of the face. 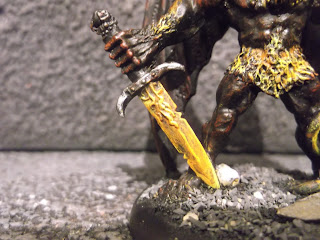 The sword, with flame detail. 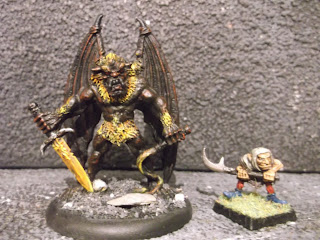 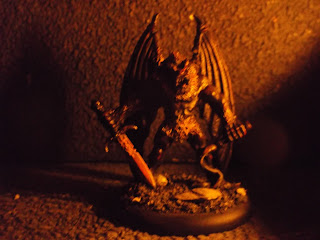 I decided to try something when photographing.
To give the idea of a Balrog in Moria, I photographed the Balgorg in the dark, with ambient lighing provided by a candle. 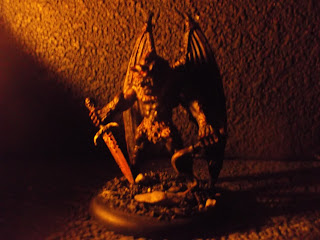 Something stirs in the deep. 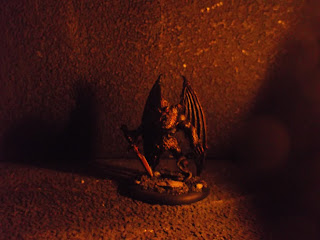 An old evil brought forth by Morgoth in an ancient age.

Next update should be on my ongiong sorting out of Oldhammer armies.
Posted by Goblin Lee at 21:31