The Terror and the Vengeance of the Lichemaster: Heinrich Kemler, Mikael Jacsen, Ranlac, and Krell.

After my last blog update on Ian Miller's artwork, I re-read Ratspike and looked long and hard at his Terror of the Lichemaster artwork. Looking at it I was really inspired by the bright colours used, so I decided to paint up the central Evil characters in this style.

I am really happy to be back painting again after not really painting anything for a few months (I've been buying things, but more on that in another blog update). I am also really happy to have chosen this paint scheme and style as it is really quite unusual. When I, and I am sure when many others, consider Undead, rusty and dull paint schemes often spring to mind, but the Ian Miller inspired really does look interesting. It may not be the most 'realistic' look, but for a fantasy army it does work.

Now, I find myself sorting out C16/C17 range Skeletons and Undead in order to build at least the bare minimum of the army for the Vengeance Scenario, and with an eye to using this as a core for a full 3,000 point Undead army. I have all the Undead required for the Vengeance scenario, and lots of odds and ends too. They are fun, and quite fast to paint, I painted all the four characters here in four hours (excluding varnishing and basing time). 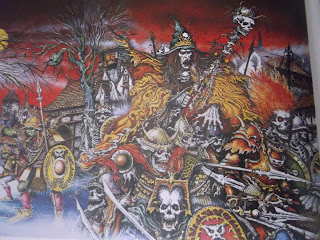 'The Terror of the Lichemaster' artwork by Ian Miller. 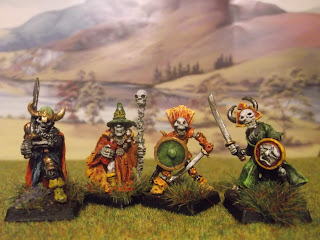 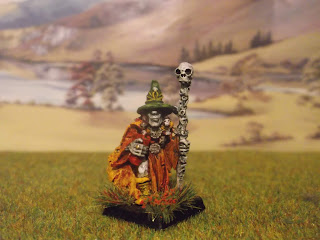 The Lichemaster.
I wanted to capture the look and colours of the artwork and looking at it the palette of colours was very simple: Red, orange, white, and yellow, with green for the hat, and a few items gold. . 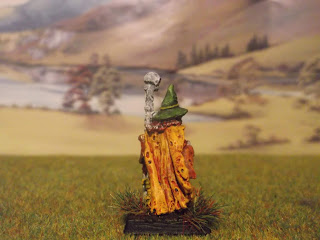 The Lichemaster's cloak.
I purposely went for a bold contrast in highlighting to mimic the art. I think that cloak alsmost looks aflame. 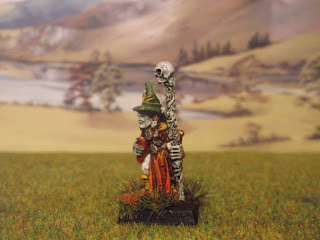 Side view.
I love the sculpting of the face, very much with a driven evil intelligence. I'm happy how the white flesh looks. A simple watered down black paint wash helped to give depth. 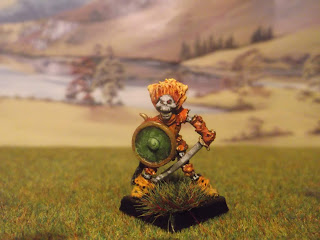 Mikael Jacsen.
In the Terror of The Lichemaster Mikael Jacsen is the lieutenant of the Zombies. He also has a flaming skull and shrieking piercing shriek.
This character is of course based on the singer Michael Jackson, and the infamous incident which occurred in 1984 when his head was set on fire during the filming of a Pepsi commercial. I think the shrieking alludes more to his singing.
The miniature was great fun to paint, and I copied the orange armour with gold trim. 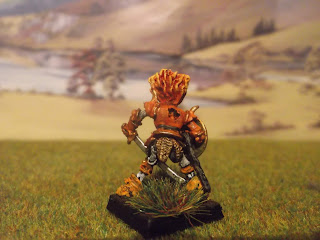 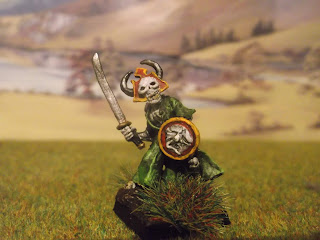 Ranlac.
Ranlac was the captain of Krell's Guard. The miniature has an oriental look to him, with the flowing robes, the Katana, the Oni or Noh looking face on his shield, and the Samurai looking helmet. It does make one wonder about the life time adventures of Ranlac. 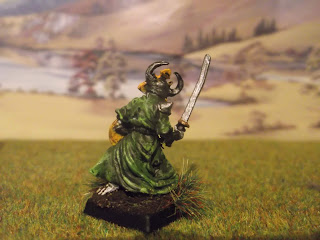 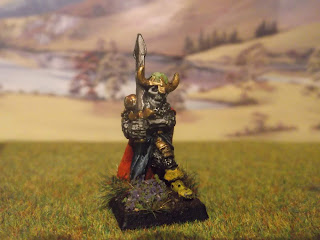 Krell.
Krell was in life a great Chaos hero. He now serves as The Lichemaster's lieutenant.
I like the look of this miniatures, he looks as all good Skeletons heroes should: a hero from an earlier age. 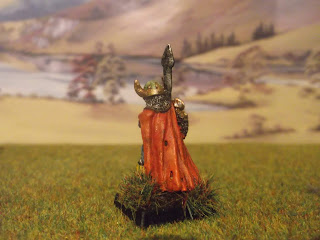 Rear view.
I enjoyed painting the rich coloured cloak. I only used highlights with red, orange, and yellow paint, without ink or contrast paints.

Next blog update will probably be more Skeletons, as I appear to be painting an Undead army now. :)
Posted by Goblin Lee at 21:10