Goblins...
...ah yes, Goblins. Got to love them (well, I do anyway). I have shamefully neglected my Goblins for some time, and that's not a good thing to do. So here is the first of many I have an intention to paint.

And by many, I mean MANY.

This fine fanatical fellow is a pre-slotta Goblin Fanatic from 1984, sculpted by Alan and Michael Perry.  He was one of six sculpted, all with the separate and distinct identities.

He was very straight forward to paint.
I chose to paint his flesh a different colour from Goblins which I have painted in the past, and different from the standard GW studio green. It was a simple Citadel Deathworld Forest base over a black undercoat, highlighted with Straken Green, and then Straken Green/white final highlighting. The whole Goblin was then given a very thinned down wash of black paint.This is the same technique I used for painting the Big Hat 4th Edition Chaos Dwarfs, but don't tell the Goblins that!

Whilst I like the colours I have used before, I will be shortly embarking upon a major Goblin painting project and so I wanted to have a lot of the Goblins a standard flesh tone, with some varieties of course. I chose this as whilst it's green, it's not the strong green of the GW studio style, but more akin to the 1st and some 2nd Edition Goblin tones.

As a side note, I have broken my Goblinoid collection down into a series of 3,000 point [3rd Edition Warhammer Fantasy Battle] armies. Two of the armies, the Tribal army of the Broken Nose Goblins, and Gnasher Goreslobber's Orc and Goblin army, will both feature more 'traditional' green Orcs and Goblins.

One last thing to note. I mounted Agrat on a 50mm round base. This is the template size for a Goblin Fanatic in 3rd Edition Warhammer Fantasy Battle, and so instead of having to use multiple templates I thought the base would look better. I chose the lipped base to differentiate to them from other miniatures bases on the table. 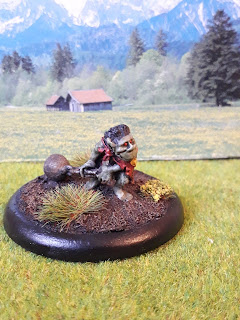 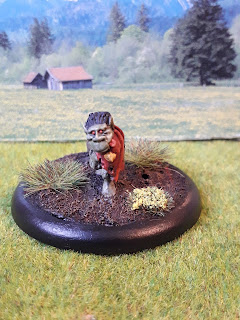 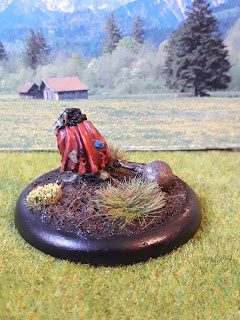 Rear view.
I love the patches on the cloak. 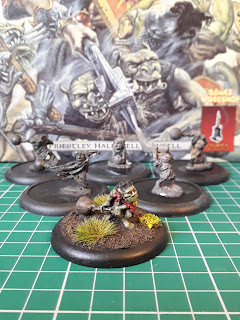 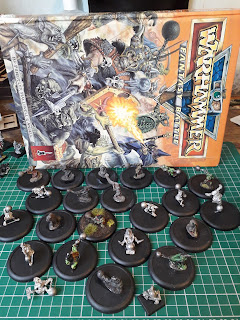 The rest of the Goblin Fanatics (excluding the Marauder and Iron Claw ones).
Next update might be more Goblins as I am sorting them into armies at the moment (well I'm sorting everything out at the moment).
Posted by Goblin Lee at 10:53