With all the sorting, organising, and rebasing of my Rogue Trader/Slaves to Darkness era Traitor Legions, I thought it was about time I actually painted some of them. So I chose a small, quick and easy Slaaneshi organised squad, and chose a colour scheme which I have been wishing to try out.

I have chosen the Alpha Legion squad, but this is probably not an Alpha Legion many people would recognise now. As mentioned previously on my blog,  I am planning to organise and paint my Traitor Legions in accordance with Rogue Trader/Slaves to Darkness era information. Much of this comes from the Slaves to Darkness book itself, as well as some of the White Dwarf magazines, and information from the Space Marine game. At this time (1988 to about 1991) there was not a great deal of detailed information on any the Traitor Legions, especially those less well know ones such as the Alpha Legion. It was mainly the World Eaters, Emperors Children, Death Guard, and Thousand Sons which received more information as they were the primary Legions representing the four major Chaos Powers, and to a lesser extent The Sons of Horus.

Concerning the Alpha Legion, my main source is from the artwork found on page 166 of Slaves to Darkness. Here there is a composite artwork of the Slaaneshi aligned Traitor Legions, which at this time we were informed were: The Emperors Children; The Iron Warriors; and The Alpha Legion. With this in mind I have chosen to organise these three Legions around the Emperors Children list in the Slaves to Darkness book as it seemed to make sense. There is a generic entry in the Lost and the Danmed book concerning The Iron Warriors and Alpha Legion, but this is only as add-ons to the Death Guard and Thousand Sons army lists, and isn't very interesting. I thought it would not be as fun to assemble as a Legion assembled using the Slaaneshi list.

Painting wise, the Alpha Legion shoulder pads are shown as a mid vibrant green, with bright red trim. There are no references to the rest of the armour colours, so I made the decision that this would be the colour scheme for the legion, something I probably would have done at the time. There are a few examples of Chaos Marines painted green, but whilst these could be Alpha Legion, I don't think this was anything more than just people painting miniatures how they wished. I also chose only to have the edges of the should pads red, as opposed to any other trim on the armour. I have done this so they would
not look too similar to the way many Nurgle Marines which were painted at the time.

Anyway, the background, or ' canon' as it appears to be referred to now, was a lot less developed then and everything was a little more fluid. In the intervening years the background, armour colours, etc have been expanded and revised, but in the Rogue Trader/Slaves to Darkness era, to which I am abiding, this is what I have. For my 'of the time'* approach to the Traitor Legions, the last 30 or so years are irrelevant. I think it is kind of fun approach, and I am enjoying it.

*'of the time'- by this I mean only using miniatures and conversion parts available from the Rogue Trader era, and using the paint schemes and army lists from the time. I have allowed myself the use of some of the newer shaped bases because some basing, especially of vehicles such as bikes, was not standard and often home made bases were used. 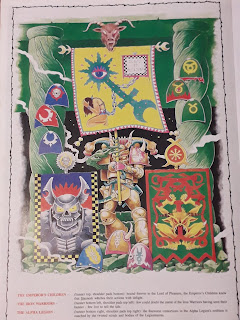 Page 166 of Slaves to Darkness. 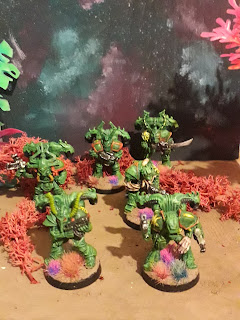 Alpha Legion Squad.
The six Traitor Marines, including a Sergeant and special weapon trooper, which comprises a Slaaneshi squad. Six, or course, being the favoured number of Slaanesh. 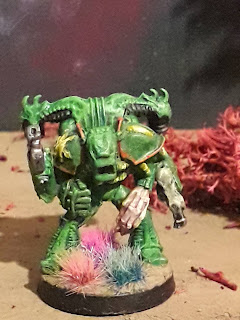 Sergeant, with power glove.
This miniature was listed a 'Four Arms' in the 1991 Catalogue. 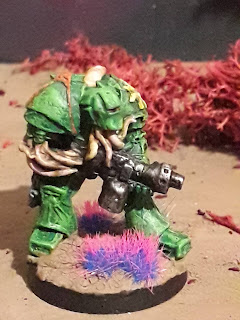 Flamer.
This miniature is listed as the Nurgle Renegade 'Tentacle arm and Flamer'. 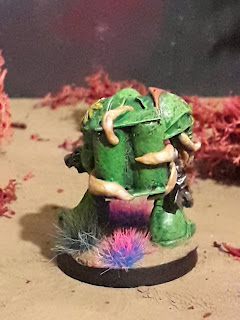 In order to make the number of plastic Chaos backpacks which I have go further, for some of the Marines I am using alternatives to the backpack. I also think it gives a little more variety. For the flamer armed Marines I have converted some fuel tanks, and in this case green stuffed some tentacles around it. 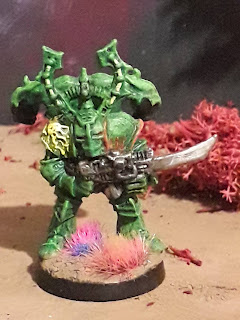 Chaos Renegade.
He is 'Bolter 13' from the 1991 Catalogue.
I like the sword like bayonet, and the textured shoulder pad. 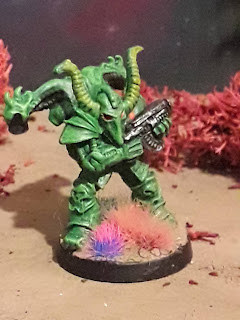 Chaos Renegade.
He is Slaaneshi Renegade 'Bolter 6'.
I should really have photographed he left shoulder pad as it has a little Slaaneshi rune on it, which I have painted yellow in line with the Alpha legions use of yellow for markings. 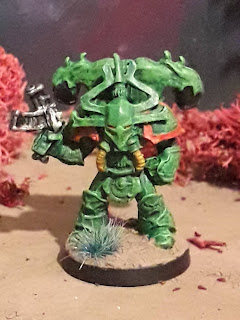 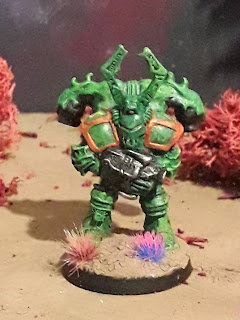 Next blog update will probably be the Night Lords squad which I am working on. I have been using the original  C100 Space Marines for the Tactical Squads, to give them an old school look, and in line with a piece of Slave to Darkness artwork.
Posted by Goblin Lee at 13:43