Unfortunately I wasn't able to do an update last Sunday but I have enough time to do a quick update today.

I have been slowly plodding on with the painting of the Autumnal Wood Elves. This week I have been able to finish one of the Scout units, the Army General, and the Wizard. I am currently halfway through the last five strong scout unit, leaving only 20 more Elves to go!

I will have enough time to do a proper update this Sunday :) .

The plan for this Sunday is to do the update on the early releases of Rogue Trader Eldar Ranges from 1987/8.  I thought it would be a nice to focus on these early miniatures before the introduction of new miniatures/background/aspect warriors etc in the famous army list article in White Dwarf #127, at a time before the move away from the Eldar as Pirates and Mercenary Raiders to an expanded  race/range with more background.
Also, as I am painting Jes Goodwin designed Elves I thuoght it will be fun to look at his equivalent miniatures for 40K, and the contemporaries to the Imperial Army, Pirates, Squats, and Orks which I have previously updated on.

I have a large Eldar Army based on the Eldritch Raiders Army list from the Book of the Astronimican and the additions from the later White Dwarf magazines. I havn't painted the army as of yet, but it's on my ever long army 'to do' list! (I do have a painted later Eldar army, and Dark Eldar from the 1990's which I will update on another time.)

Here are this weeks Wood Elves :) 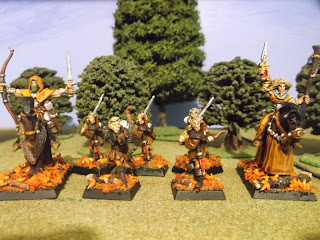 The scout unit flanked by the two characters. 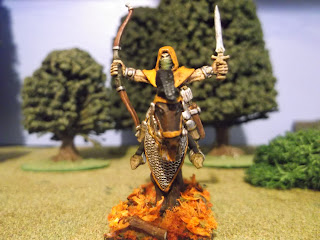 Army General.
I really like this miniature and am pleased I could use him as the General. He is from the Elf Personalities range from about 1987. 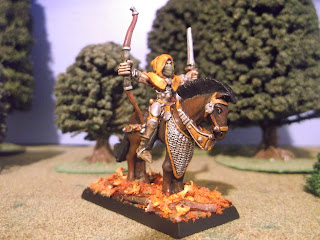 Side view.
The personalities range have different horses to the rest of the Elven Cavalry, they were more barded and standing still. I have placed the General on the least barded of them as I did'nt buy barding for the horse in the army list, but still wanted to use the standing horse.Also, as this and the Wizard are the only ywo mounted Wood Elves in the Army, I did'nt think it mattered and actually suited the army better than galloping horses.
The range also included add on extras/saddle bags such as swords, scrolls, bows, etc, but I left these off as I did'nt want to clutter the horses. 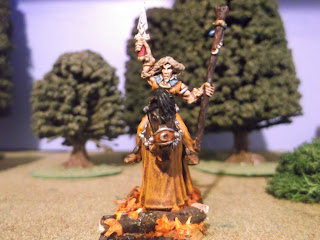 Elven Wizard.
He is on a barded horse as I paid for the barding. 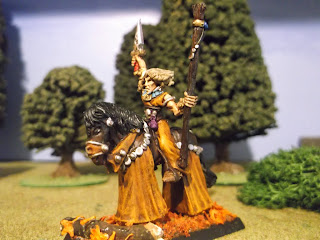 Side view.
For the horse barding and Wizards robe I went for the muted Autunm orange brown after first trying just brown. Just brown looked too dull, but the Autumnal orange looked brighter but without looking too much. 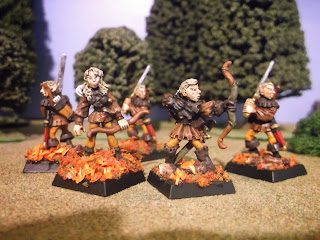 Five Scouts.
Four of them are from the old 1980's Citadel Lord of the Rings Range ME-31 Silvan Elves of Mirkwood.
I went for a largely uniform paint job for the Scouts to give the impression of small close knit units. 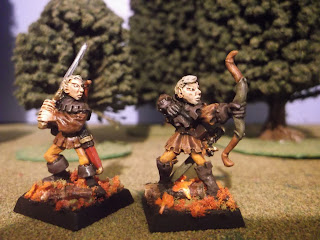 Two of the 'Mirkwood Elves' .
I will use the one on the right as the unit leader.
I am not sure who designed them, but they are not Jes Goodwins style, they maybe Aly Morrison. 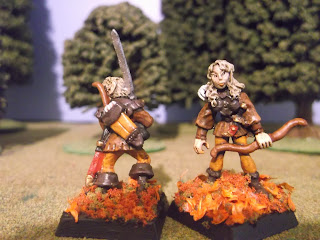 On the left is the rear view on the one on the left above.
The female Elf on the right is a solid based one from the C08 High Elves range. That range was designed by Aly Morrison and looks similar to the Mirkwood Elves, which is why I thought he might have designed them.
It is because they looked different in design I put them into units of their own so as not to break up the look of the Jes Goodwin Elf units. 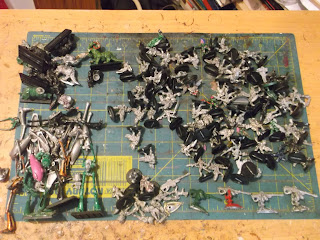 Rogue Trader Eldar!
Just some of the Eldar that I will be sorting out for Sunday. :)
Posted by Goblin Lee at 15:20