50,000 blog views!! And back to blogging and painting. And a Goblin, some Orcs, and some Skaven too.

First of all I am pleased to announce that my blog has reached 50,000 views (51,620 as of today) since I started last year. I would like to thank everybody who has taken an interest in my blog. I still have a lot of stuff I that needs to be added. 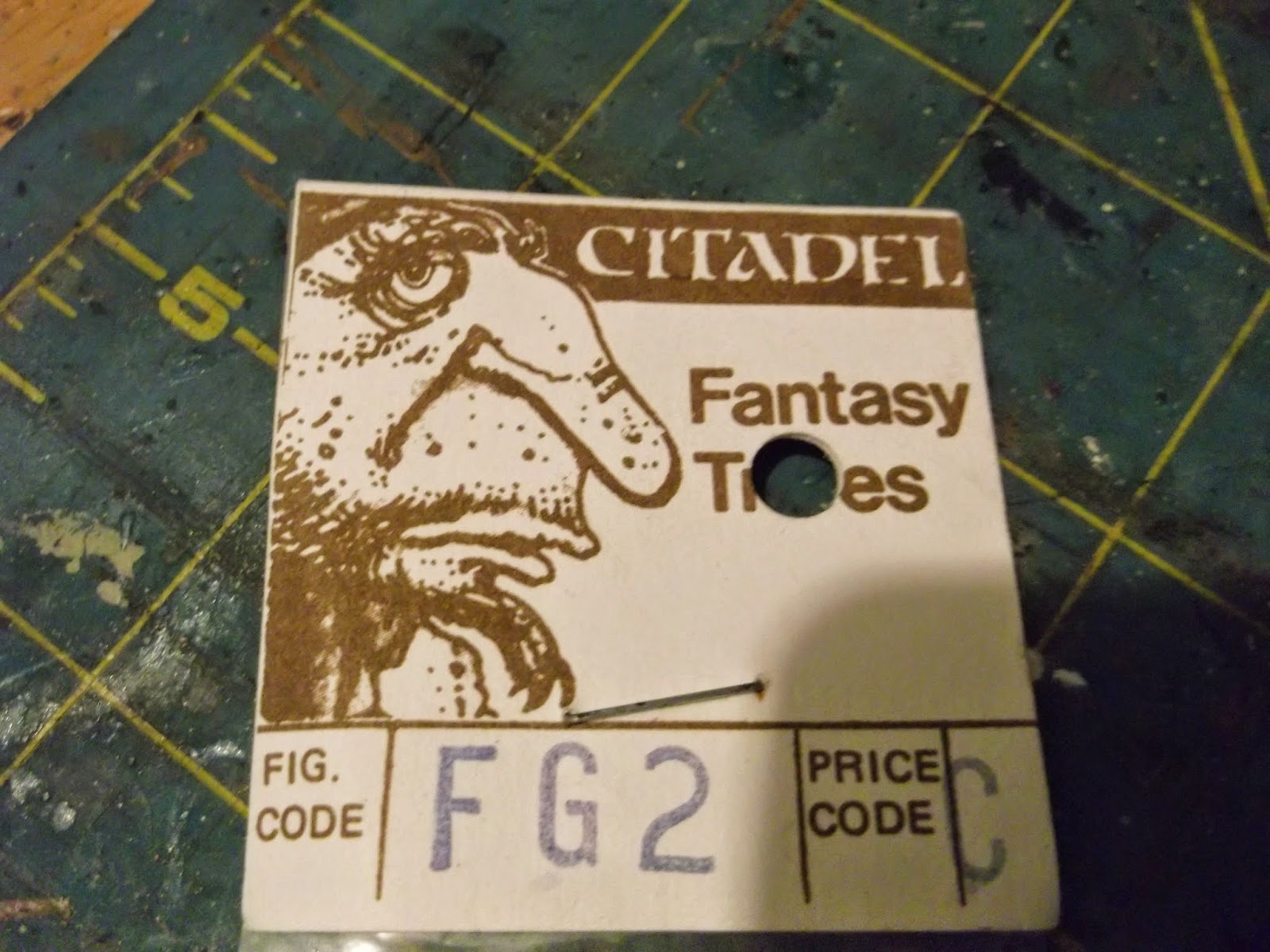 Secondly, I have taken a bit of a break from blogging over the last fortnight, but now intend to return to both blogging and painting with renewed focus. Recently my time has been taken up with the writing up of the 3rd Edition Warhammer battle report and the painting up of a few Slann for the battle before. Added to that a very busy time at work has lead to me doing very little painting recently. I did manage to finish 10 Gutter Runners though. 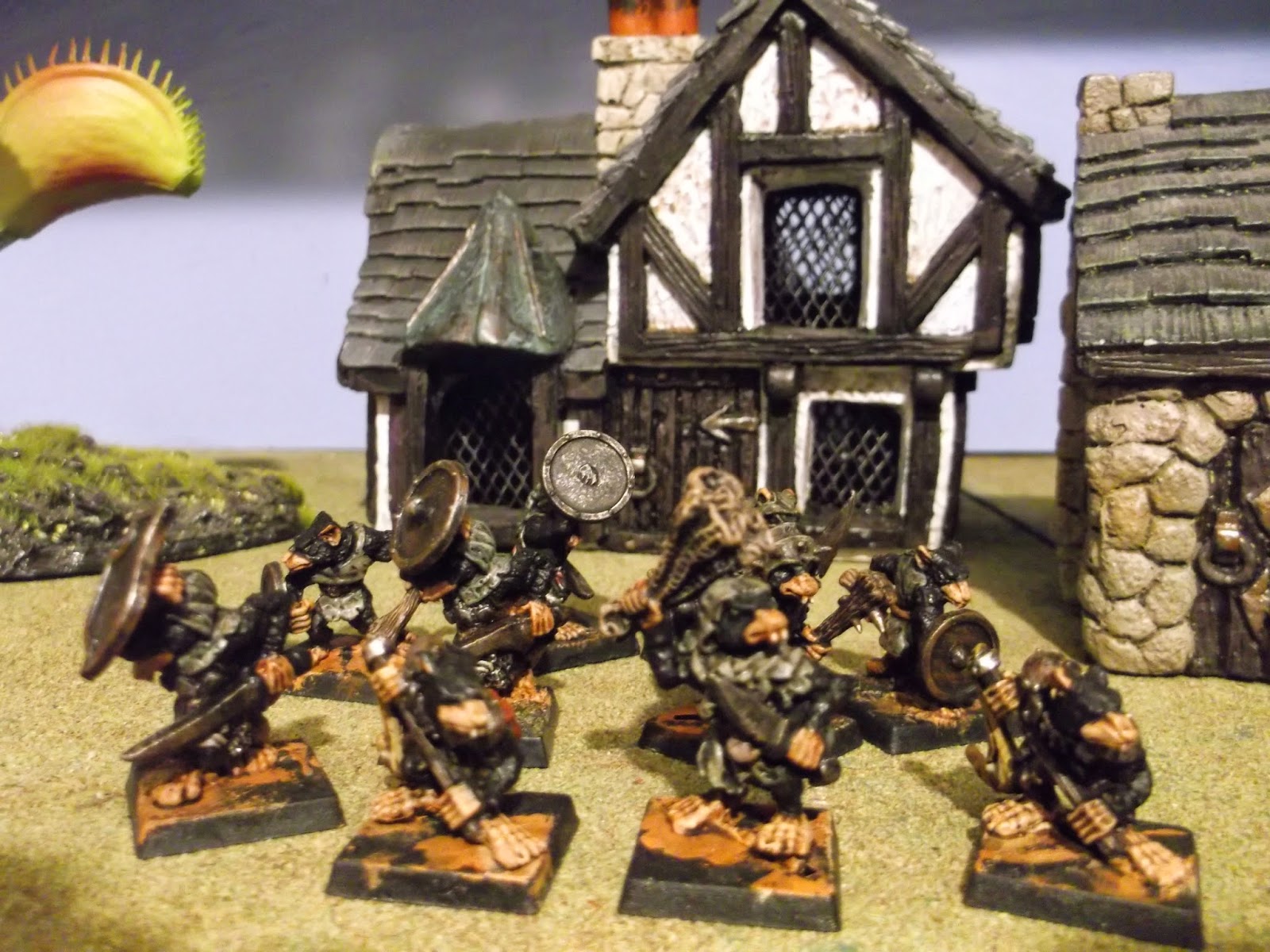 10 Skaven Gutter Runners, all from the C47/27 series Ratmen/ Skaven, or the later 1980's Citadel releases.
Unlike the rest of the Skaven in the army I have painted them with black fur to suggest their more stealthy lifestyle of hiding in shadows, and of course gutters. 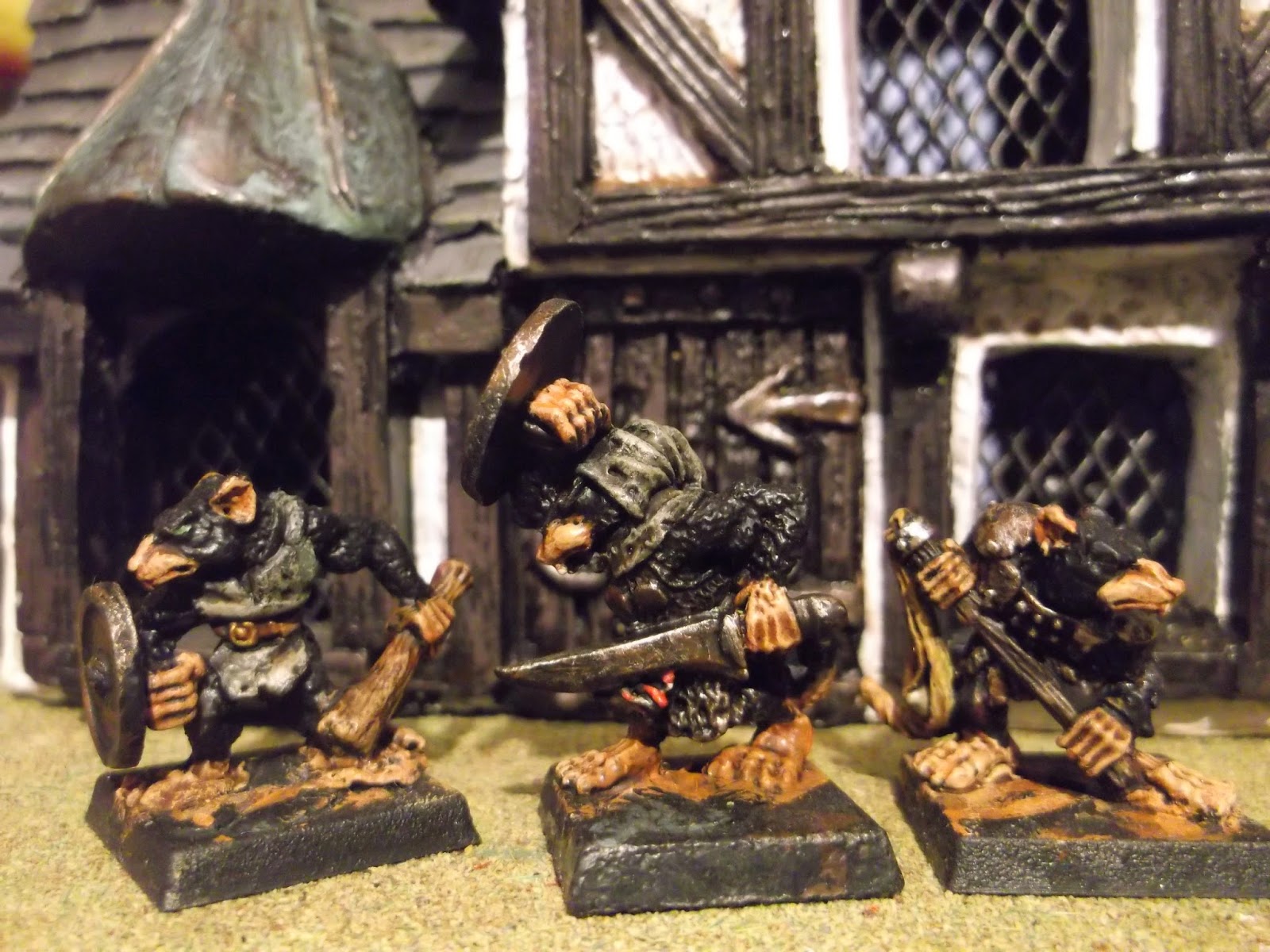 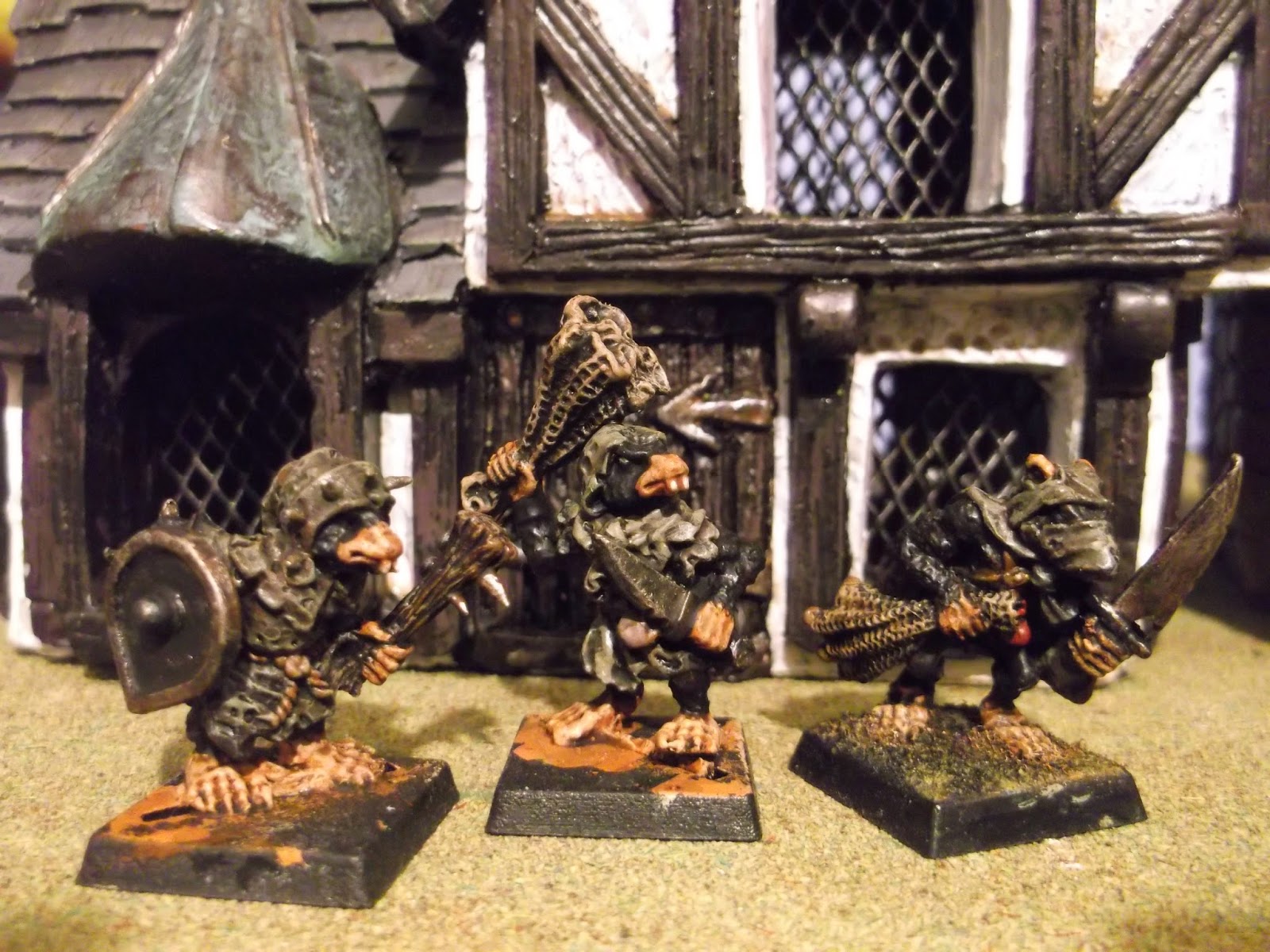 My plan is to finish off the Skaven army finally, an army which started way back in July. I only have about 30 or so Skaven to finish off, so I intend to complete them this week for next weeks blog update. 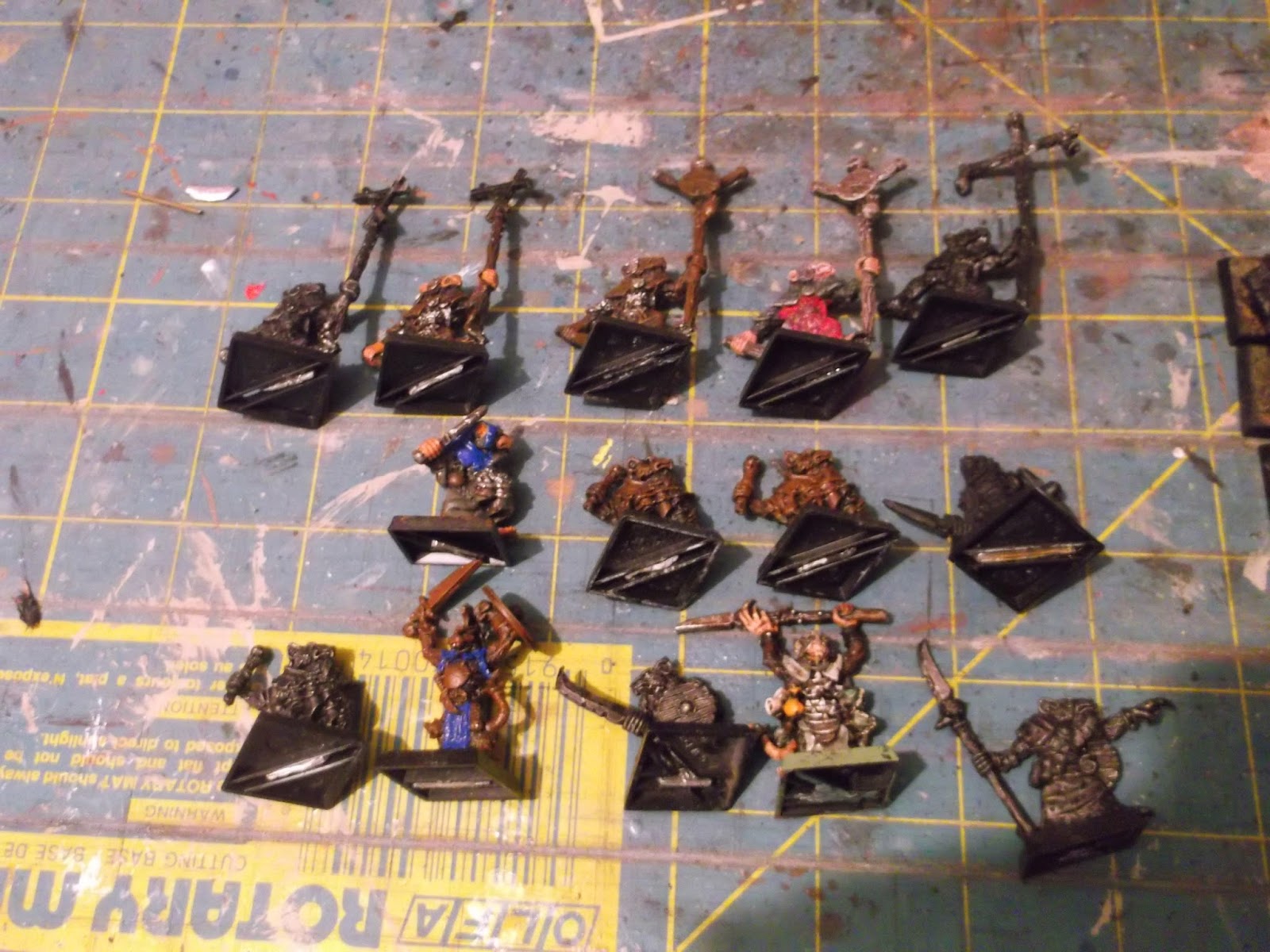 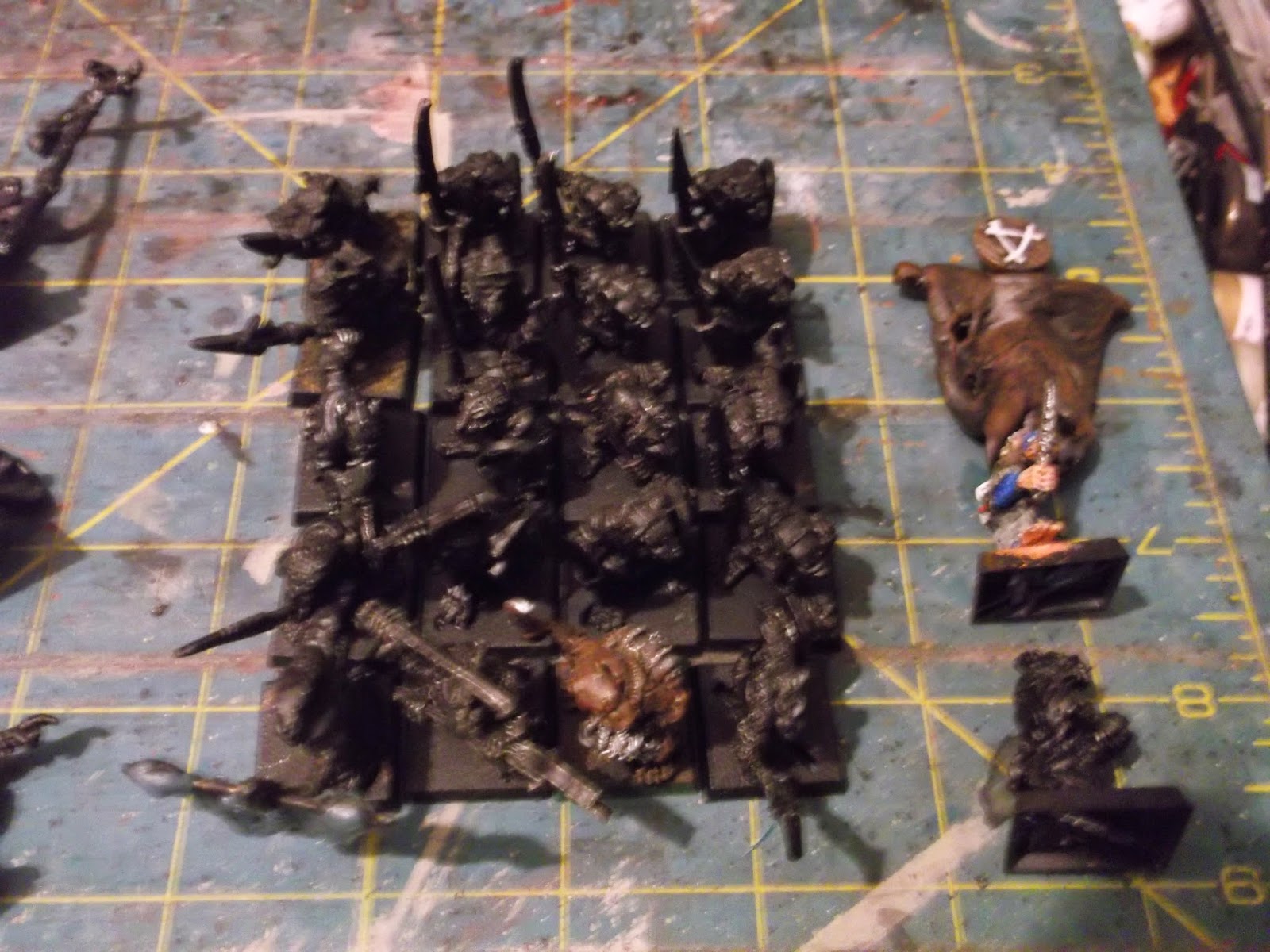 20 Stormvermin, the Army Standard, and Wizard.

Other than the Skaven I have another few projects to consider. Justin and I are planning another large scale 3rd Edition Warhammer Fantasy battle, about 6,000 points this time. He will again use his lovely Wood Elf army, whilst I am unsure whether to use the Slann again or use another army. I would love to use a Goblin only army based on a modified version of the Warhammer Armies list. To do that would require ignoring the requirements to take Orcs, and the maximum limits on the number of Goblins to be taken. However, if we are to stage a game in the next couple of months the Goblin army won't be ready in time, and the Slann will have a chance to fight again! It will also give an opportunity to paint up some Goblins, something I have missed doing of late.

Now for those of you unaware it's 'Orctober', where people are encouraged to concentrate on their Orc (or Ork) armies during October: http://ernysplace.blogspot.co.uk/2014/10/orctober.html

Now however tempting this is I am still going to finish off the Skaven as the project has dragged on long enough. I have though got an idea for using the remainder of the Orcs I have which I did'nt include in my 3,000 point Warhammer Armies Goblinoid army. I still have several hundred Citadel Orcs from the 1980's, and so my plan for them is two fold:

Firstly to increase the current 3,000 point army to 6,000 points so it can stand against Justin's Wood Elves, by adding enough Orcs to the army to do this. I want to keep it a largely Orc army, keeping the Goblins to a minimum, giving the army a tougher feel and character. And anyway, I want to have the Goblins strike out in their own army.
The modification of the army will require me adding another 10 Boyz, 20 Big Un's, 20 Savage Orcs, 20 Savage Orc Archers, 40 odd Archers (which I want to do using about 20 crossbow armed Orcs as well), some more warmachines, and about 30 Boar Riders. I have all of these and it just requires me sorting them out and glueing/basing them, and then painting those which require it.
I will sort out a prescise army list for them a little later. 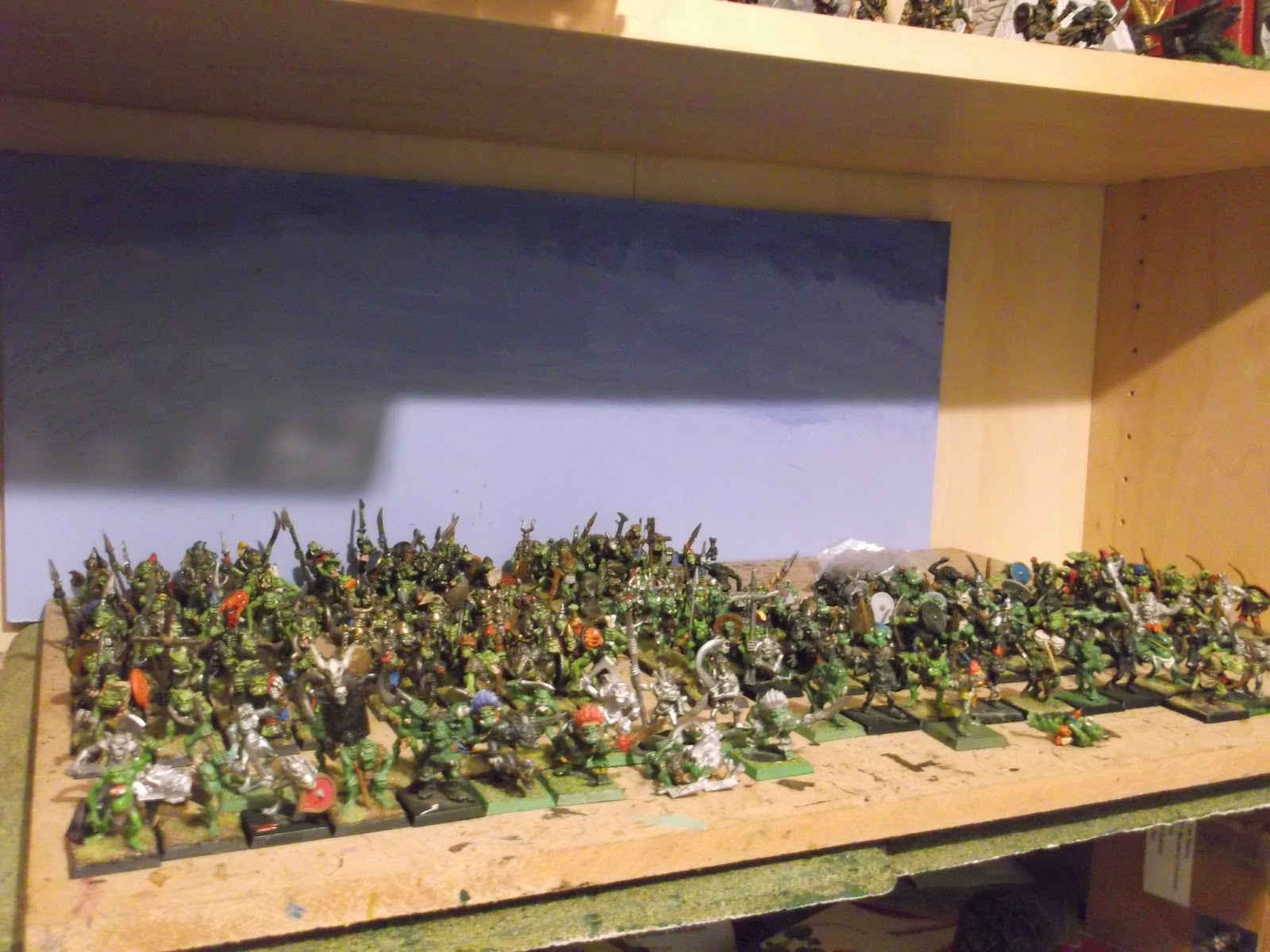 Most of the 220 Orcs needed to expand the army. 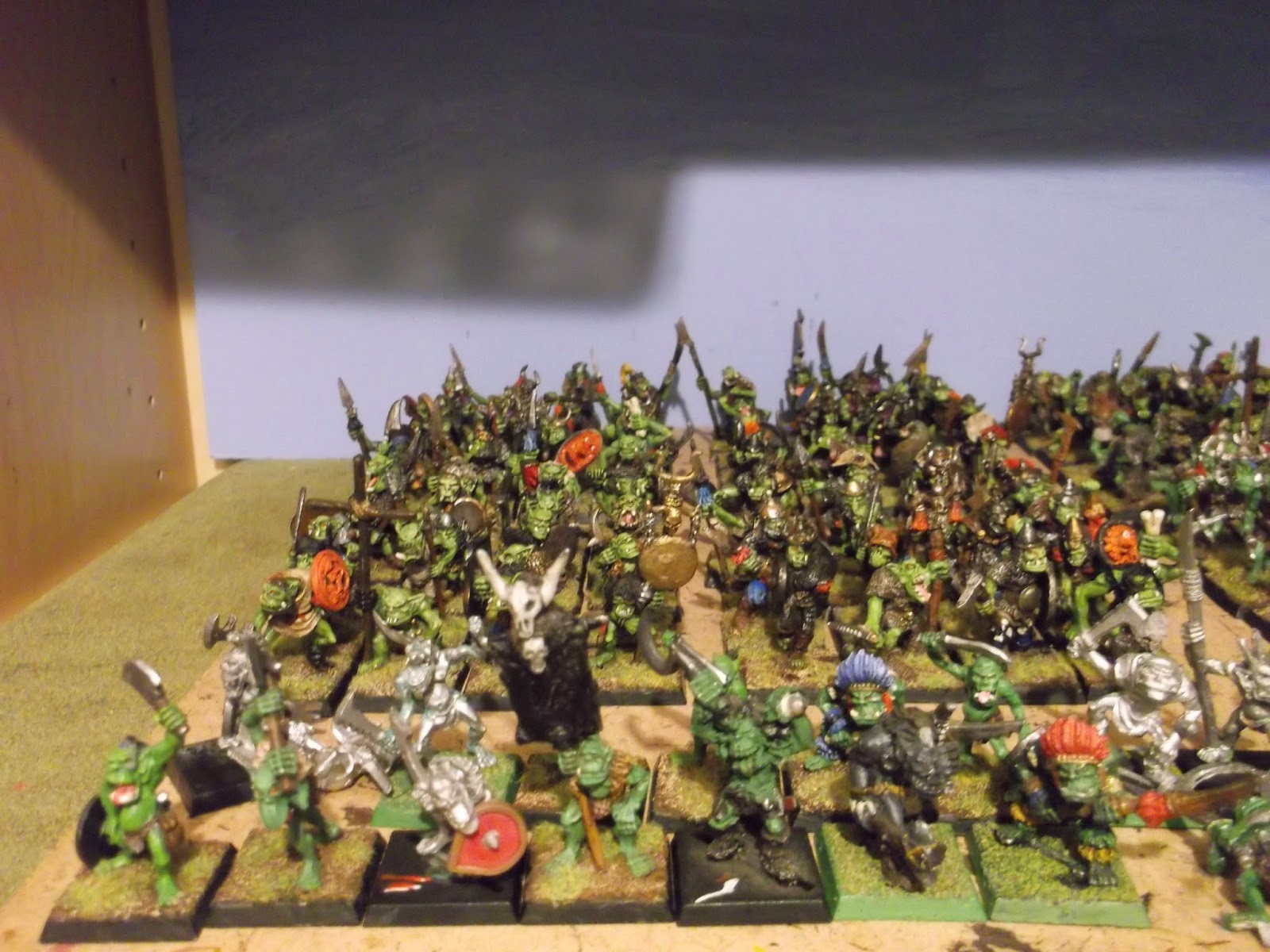 There's a mix of painted, need to be re-painted, and unpainted Orcs. 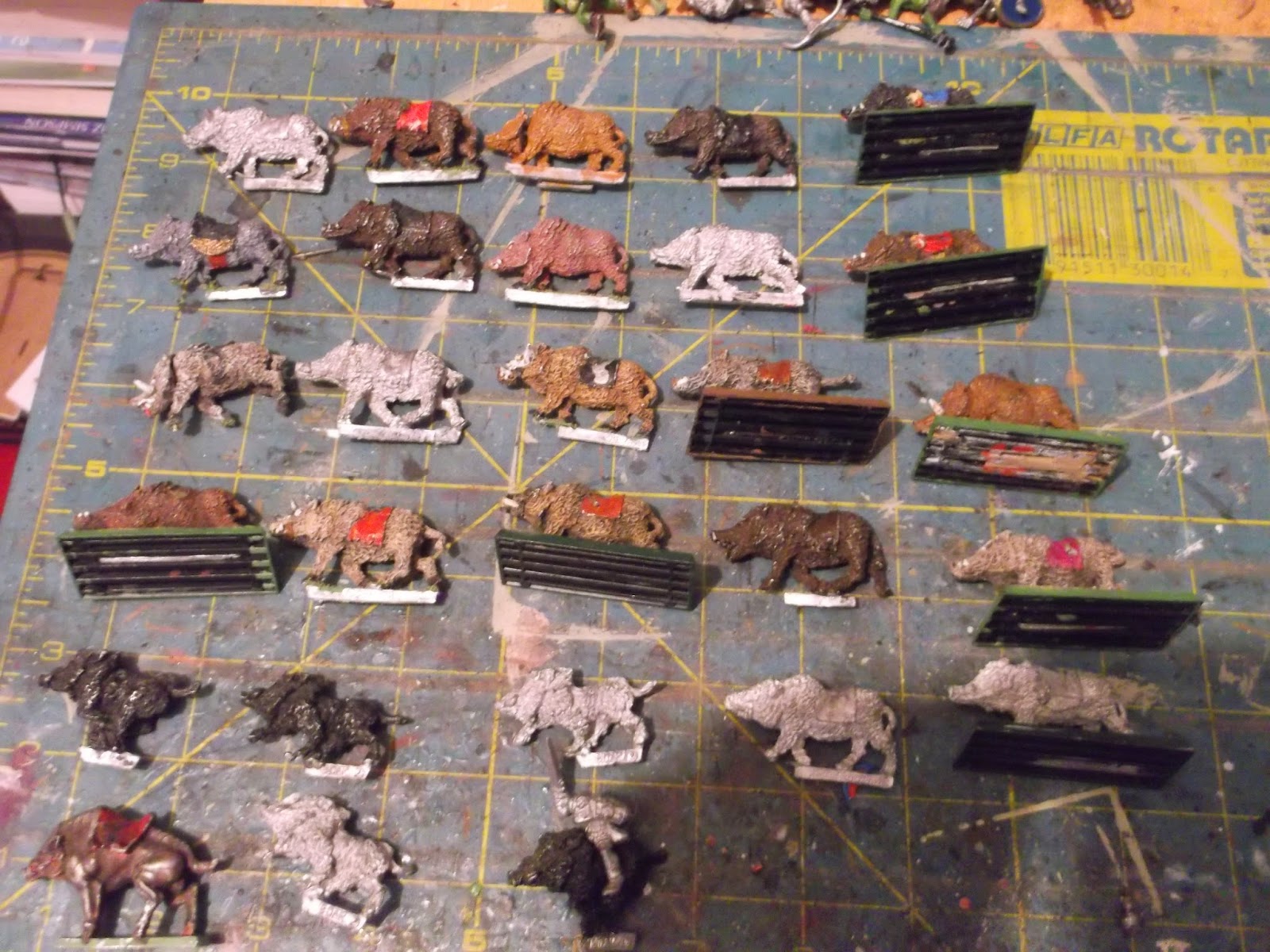 28 Orc Giant Boars.
I have more than nough riders for these, and I only need two more boars. I think I have some more somewhere, otherwise I might use a couple of spare Giant Wolves. 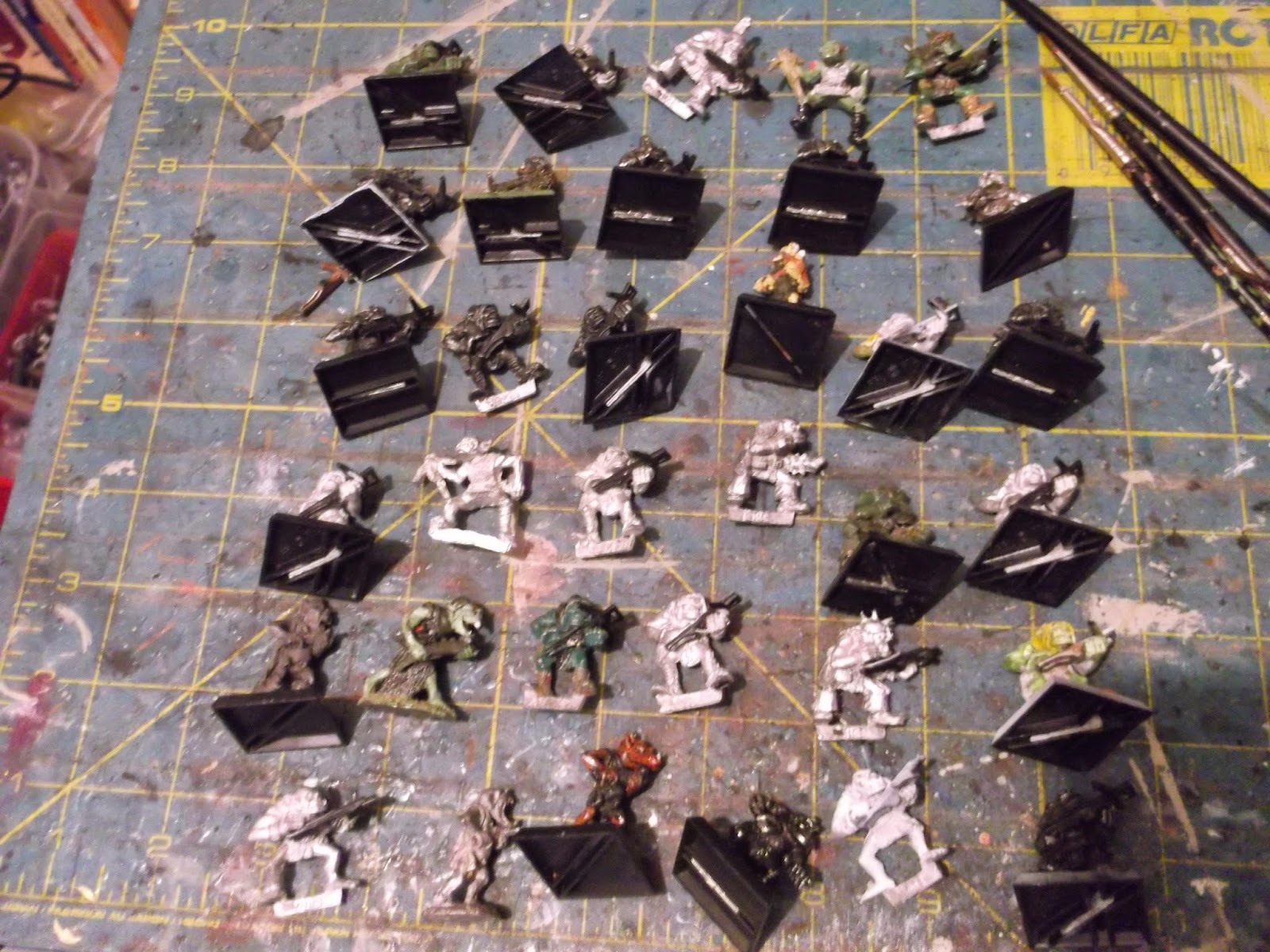 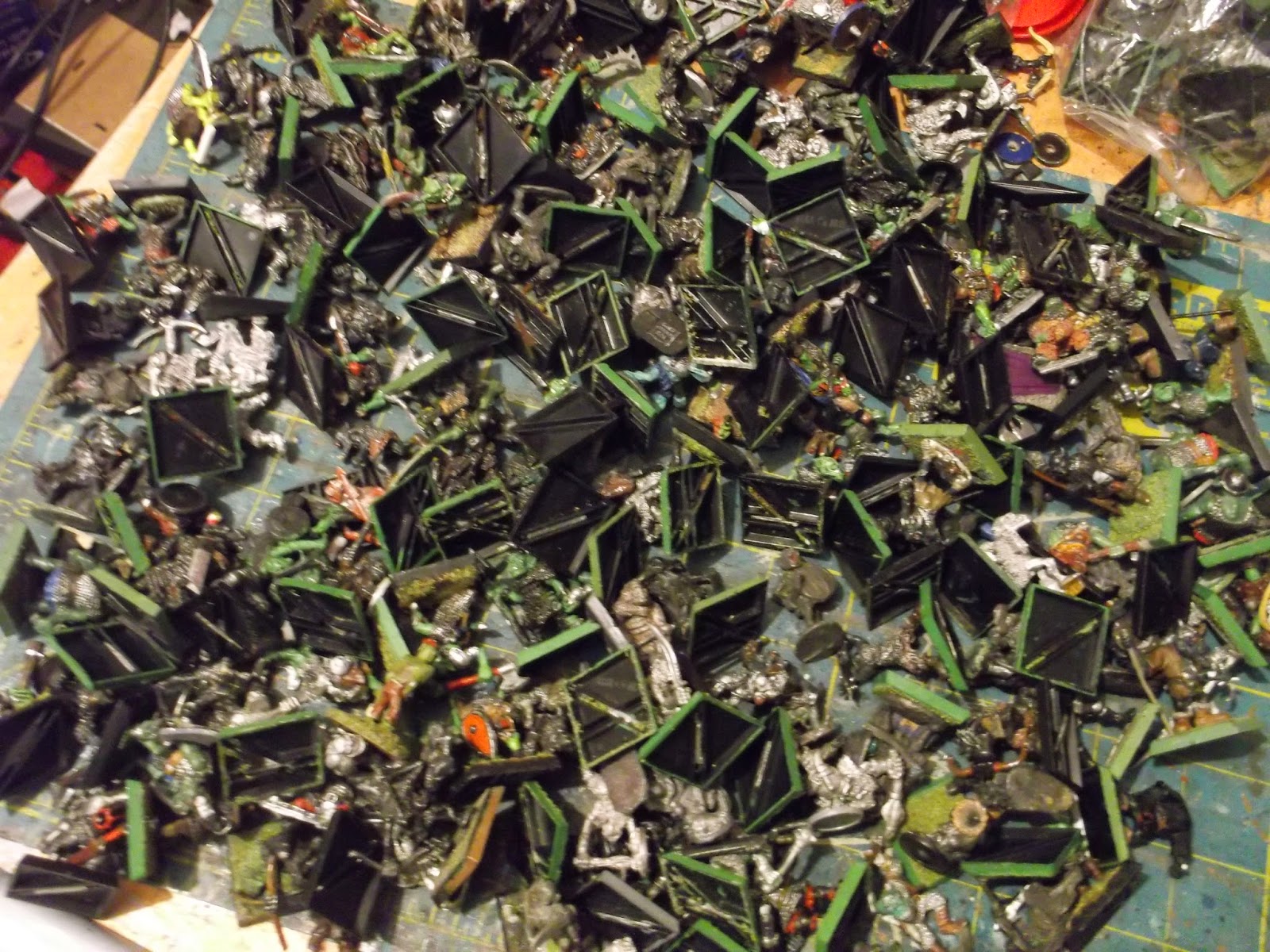 Secondly, once I have seperated the Orcs out needed for the above project, I want to use the remainder for a fun little 3,000 Orc army idea. Last year I painted up an Autunmal Wood Elven Army, which can be found here: http://goblinlee.blogspot.co.uk/2013/12/autumnal-wood-elf-army-completed.html


I wanted to have a companion army to oppose my Wood Elven army, whilst keeping and sharing the same concept. Therefore I plan to paint up, ideally this Autumn, an Autumnal Orc army. This will use a mix of 1980's Citadel, Marauder, Grenadier, and 1990's Harlequin Orcs and Goblin's I have spare. Again, I want to make it an Orc heavy army, and also an archer heavy army to suggest the Orcs taking on the methods of their Elven foes, albeit in a cruder fashion. 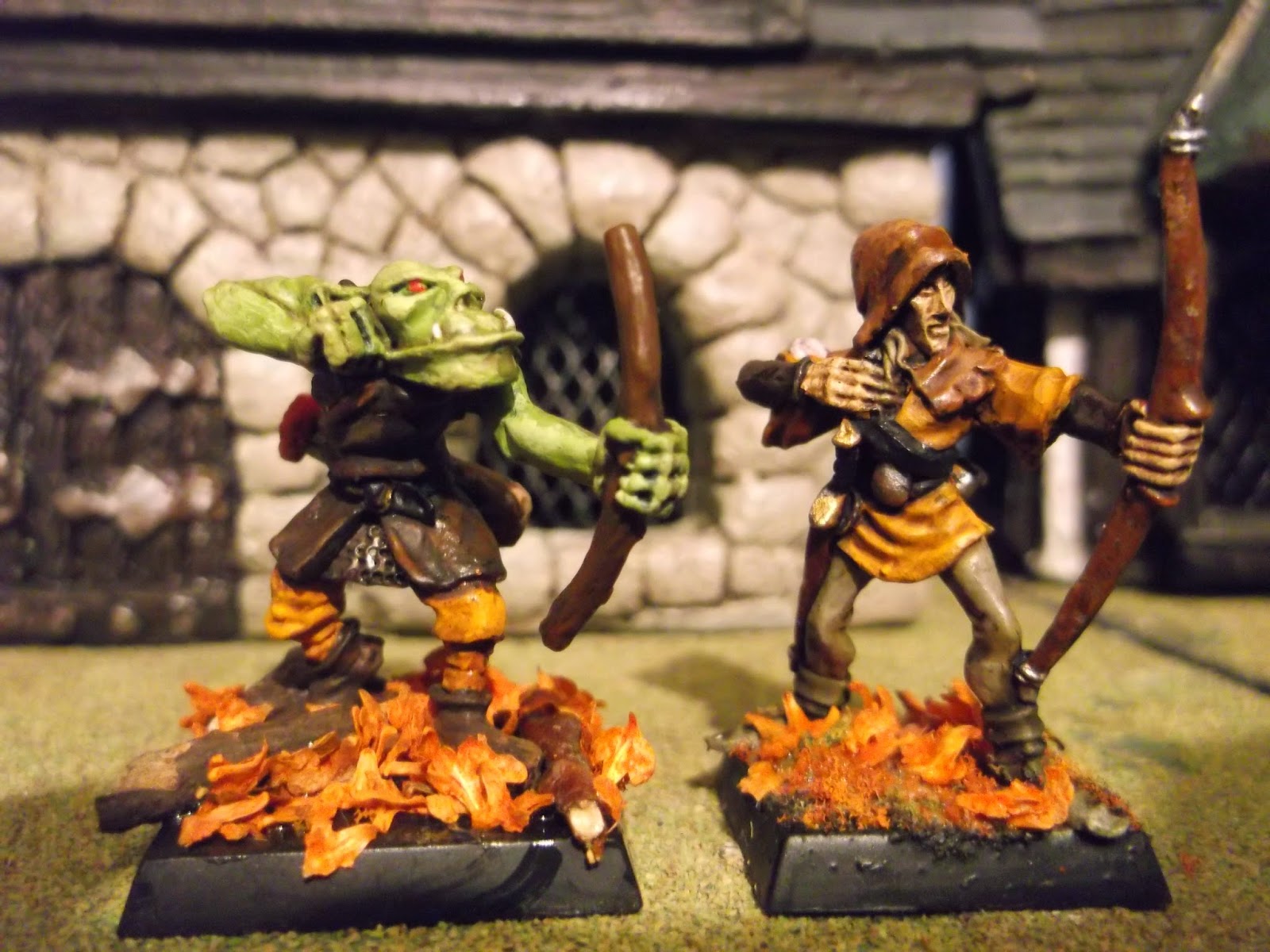 A test model 'Autumnal Orc' I painted this afternoon next to one of the Elves from last year.


Other than that, I have still been buying Great Goblins/Gnolls from e-bay, and I am steadily adding to them. I did buy a Gnoll/Great Goblin mint in his packet a few weeks ago and have been waiting to open him so I could post it on the blog. 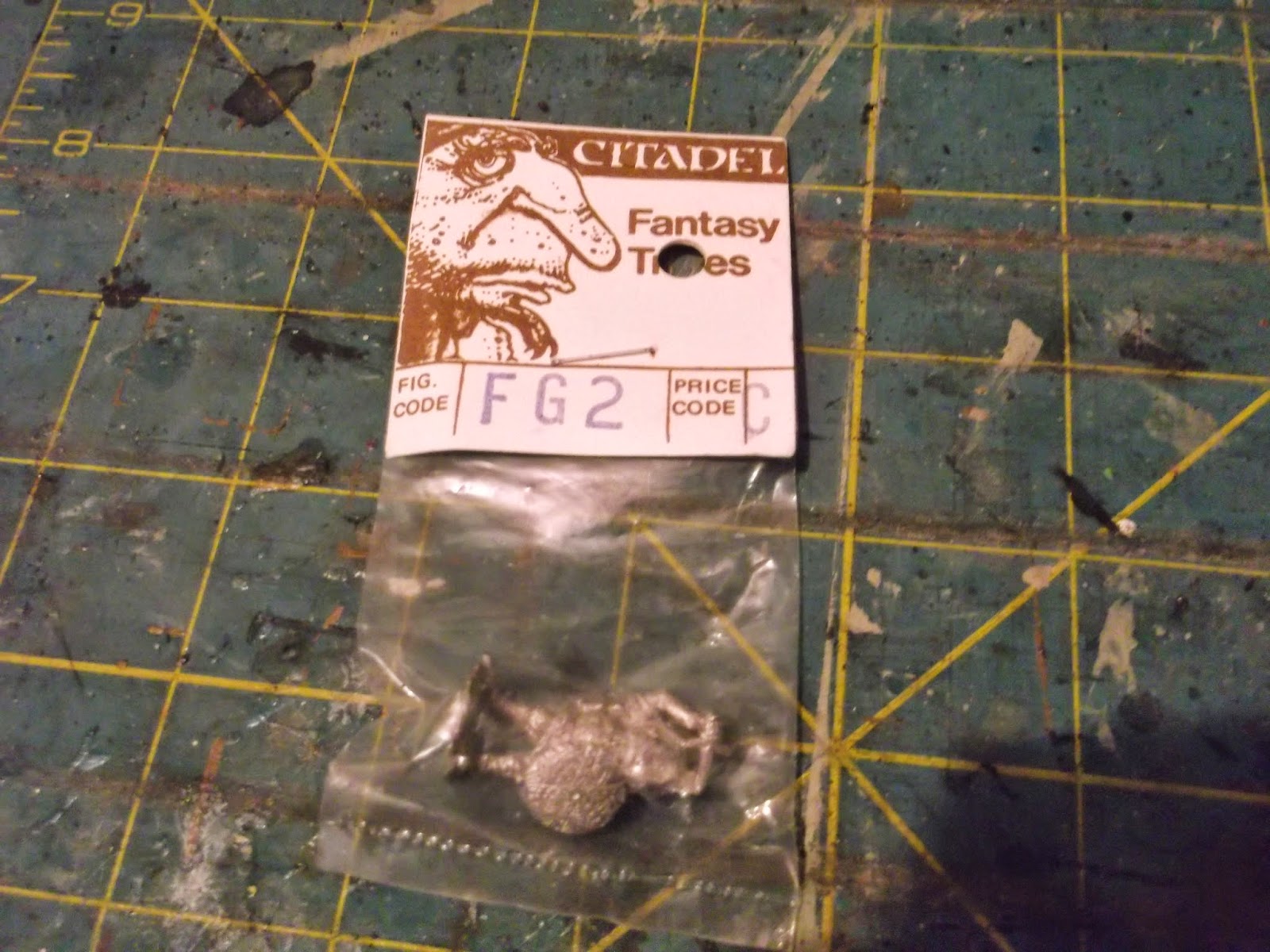 Still mint in packaging after 30 odd years!
An FTG 2 Gnoll/Goblin attacking with Hand Weapon.
Variation 11 according to the Collecting Citadel Miniatures Wiki. They also list the code as FTG, not FG as on the packet.
http://www.collecting-citadel-miniatures.com/wiki/index.php/Gnolls_/_Goblins_-_FTG_Fantasy_Tribe_%28solid_base%29

I am not sure how other people feel about the suggestion of keeping things unopened and mint in packaging. Personally, concerning miniatures I think it is almost a shame not to open them up and paint them. It might be a different case for other types of collectables (I have never considered my miniatures to be 'collectables' as such), but for miniatures, epsecially Goblins, I feel almost duty bound to set them free!

...afterall, if they are stuck in a packet, how can they be mischievous? 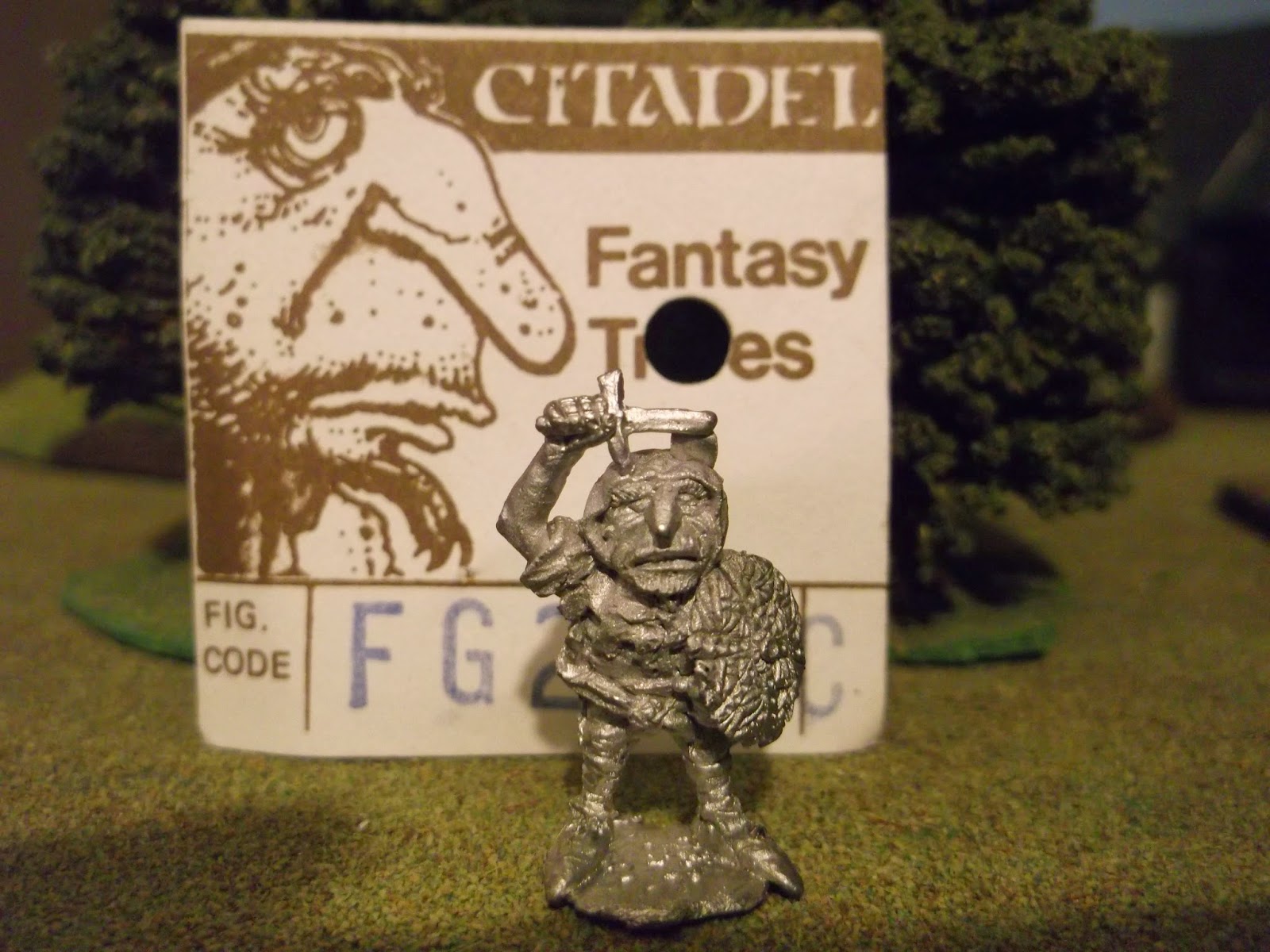 Free at last!!!
He has a shorter, probably slightly miscast, sword than online references suggest. I have found that this can be a common occurance for the Gnolls/Great Goblin ranges. They sometimes have slight miscastings, especially on weapons, but it does'nt detract from the character of the models.

Next blog update will be painted Skaven, and an update on the Orcs.
Posted by Goblin Lee at 18:14