Apologies for the brevity of this weeks blog post and that it covers some of what was covered last week, but I have had a very busy week at work, and a chaotic weekend (and not the lovely kind of Chaos which gives you rewards, followers, and the chance to Let the Galaxy Burn! :(  ) .

Given that, I was able to paint, varnish, and base the last of the Space Orks which I needed to paint to complete the small scouting force. The inital idea for painting these Orks was partly in line with the'Orktober challenge', that is to paint up some Orks or Orcs during October. For my part, it just gave me an excuse to paint up the last part of my Rogue Trader Orks (although I still have 3 unfinished Wartraks to do), rather than seriously compete for the prize.

The Ork force was based on the 'Ork Assault Grenadiers', the scouting force which were the protagonists in the Rogue Trader scenario "Skrimish on Rynns World: The Battle of Jadeberry Hill" published in White Dwarf #94. As I don't have a printer/scanner though, I cannot scan the scenario for the blog. :(

In the scenario the Ork force consisted of 4 squads of 5 Orks, armed with Bolters, combat-accessory, and  equipped with Flak Armour, Frag and Krak grenades. One of the Orks in a one of the squads was equipped with a Heavy Bolter and Bolt pistol in place of the Bolter.

This force was lead by the "moody albino Ork Captain Ulruk of Mergabenerga". He an Ork Minor Hero, and armed with a Bolt Pistol and Chainsword, and equipped with Flak armour and Refractor Field (but no grenades for some reason apparently). The Captain seems to be a humourful idea based on Elric of Melnibone.

The whole force is basically designed to be the same force as Thrugg Bullnecks force in the 'Battle at the Farm' scenario, and can be built using the RTB02 Space Ork Raiders boxset, and a few extra Orks. The only differences are that Ulruk does'nt have the Plasma Pistol Thrugg is equipped with; Thrugg's second in command has a Champion profile upgrade; one of Ulruk's Orks has a Heavy Bolter and Bolt Pistol; and none of Thrugg's Orks have grenades.

I painted them up to tie-in with the Wehrmacht look of the rest of my Rogue Trader Orks, Luggub's Drop Force, but still give them a slightly distinct look from the rest of the army. The fatigues and helmets/caps I painted black, the Flak armour I painted World War 2 German Uniform Green, to give a slightly SS feel. In addition I painted odd little different details as they are Space Orks and not always good at keeping to uniform and equipment regulations!
The Luggrub's Drop Legion update, including Thrugg's force can be found here:
http://goblinlee.blogspot.co.uk/2013/06/rogue-trader-orks-luggubs-drop-legion.html 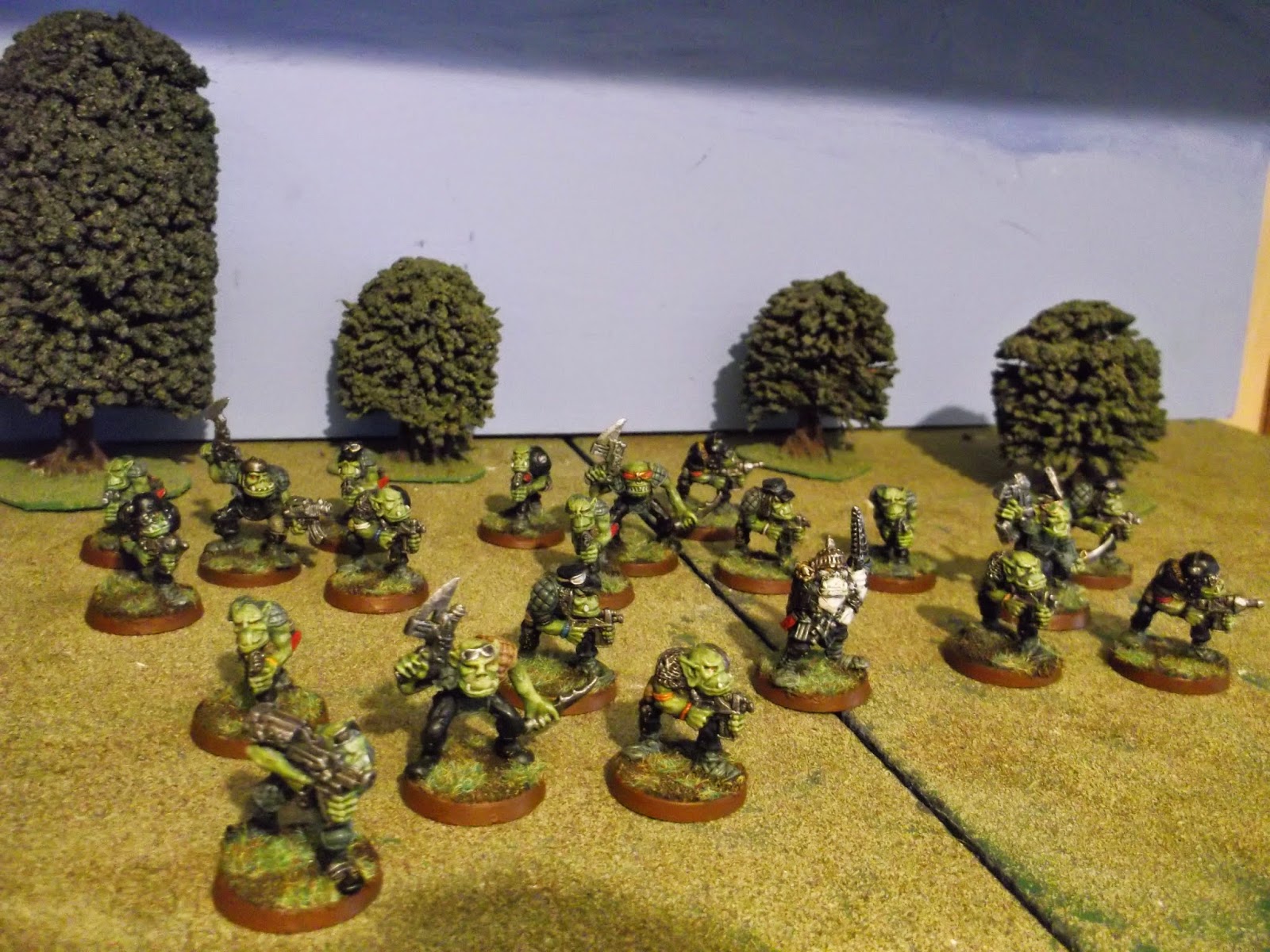 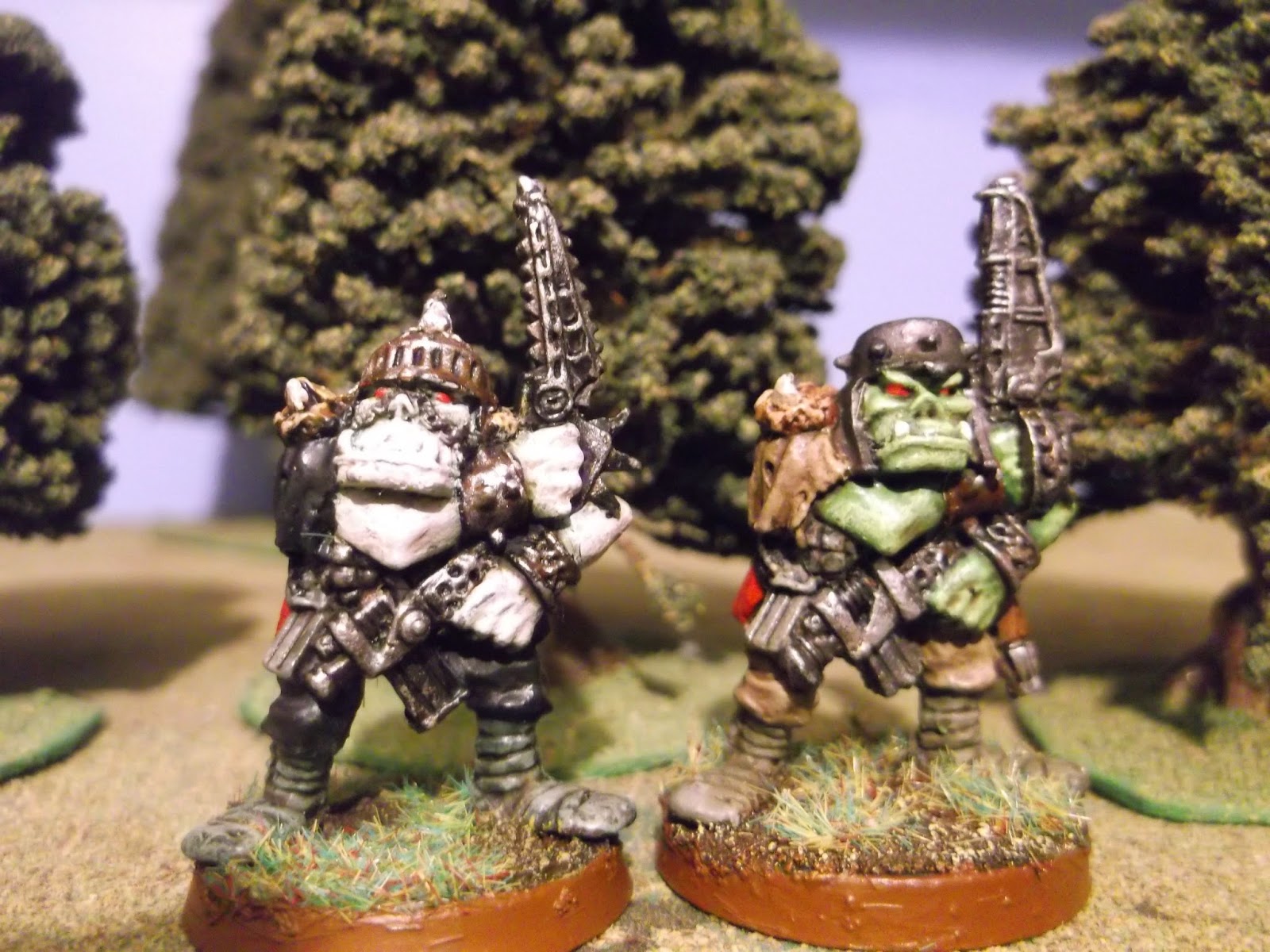 On the left is the model I use as Ulruk (he was released under the name 'Buzzy Bazzacks' , and on the right Thrugg Bullneck.
Both are very similar models and one was probably sculpted from the other, although as they were released at the same time it's not easy to know which. I would have thought it was Thrugg as they are present in the Rogue Trader Rulebook photographs. 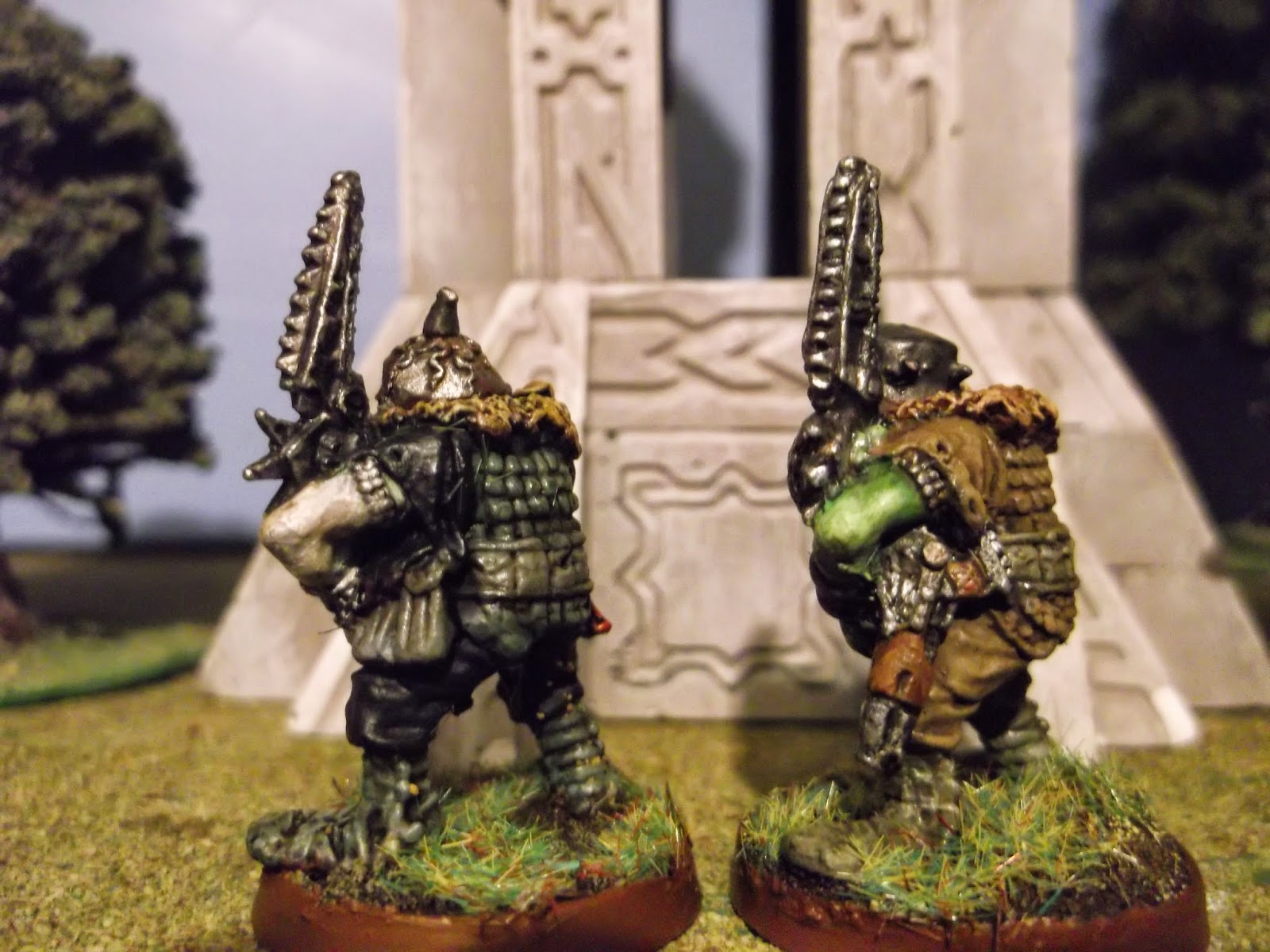 Side/back views.
Note Thrugg's Plasma Pistol.
As there was never a Ulruk model, I chose Buzzy as he was very similar to Thrugg. As both forces are similar, I imagined both them being rival commanders of similar scouting forces.
Think Father Ted vs Father Dick Byrne. ;) 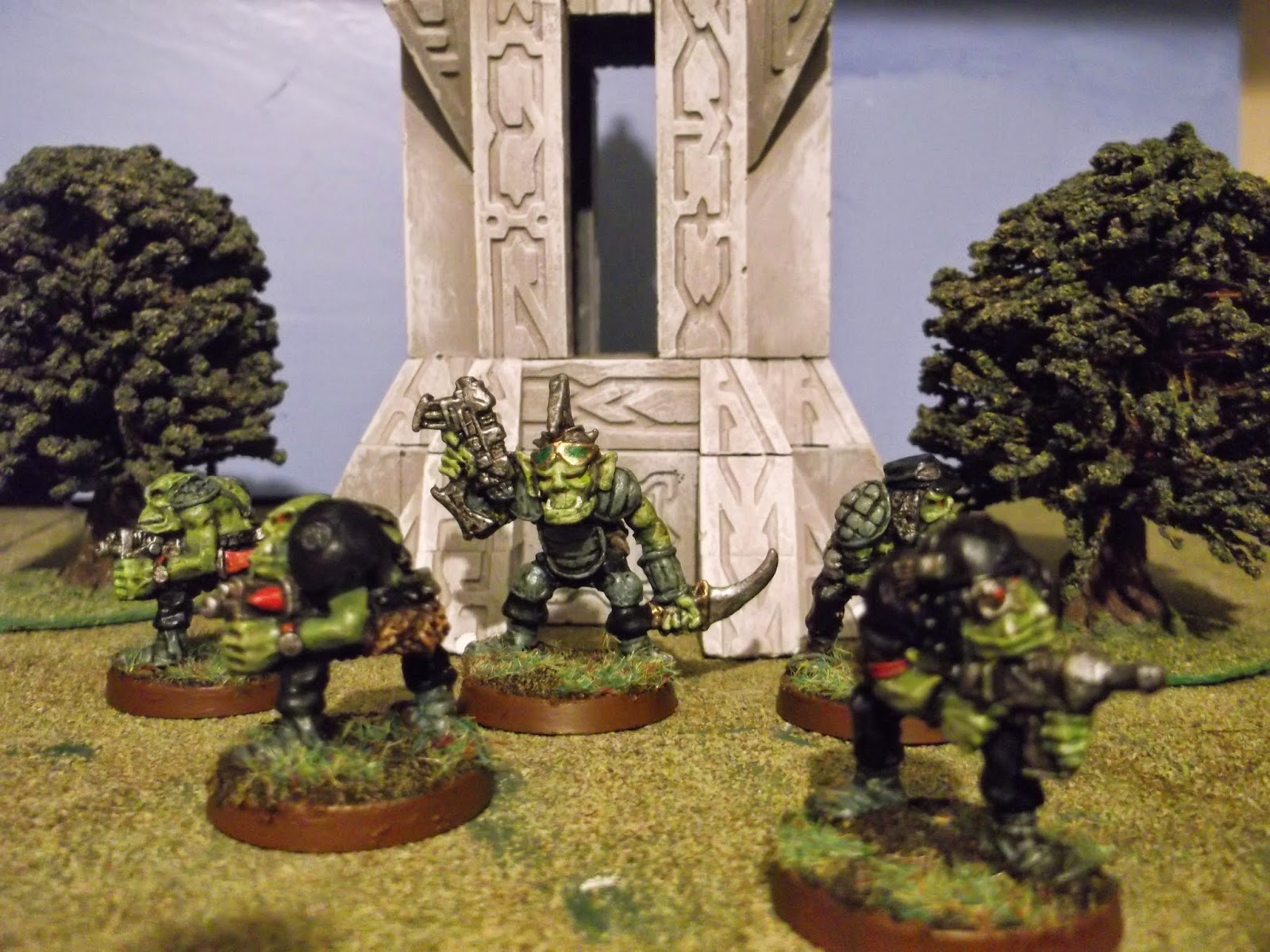 Keeping with the theme of the force being simialr to Thrugg's, I used the same basic Trooper models, the ones from the Space Ork Raiders box set minus Thrugg of course, although I did keep the Hruk model to serve as one of the Grenadier Squad leaders. 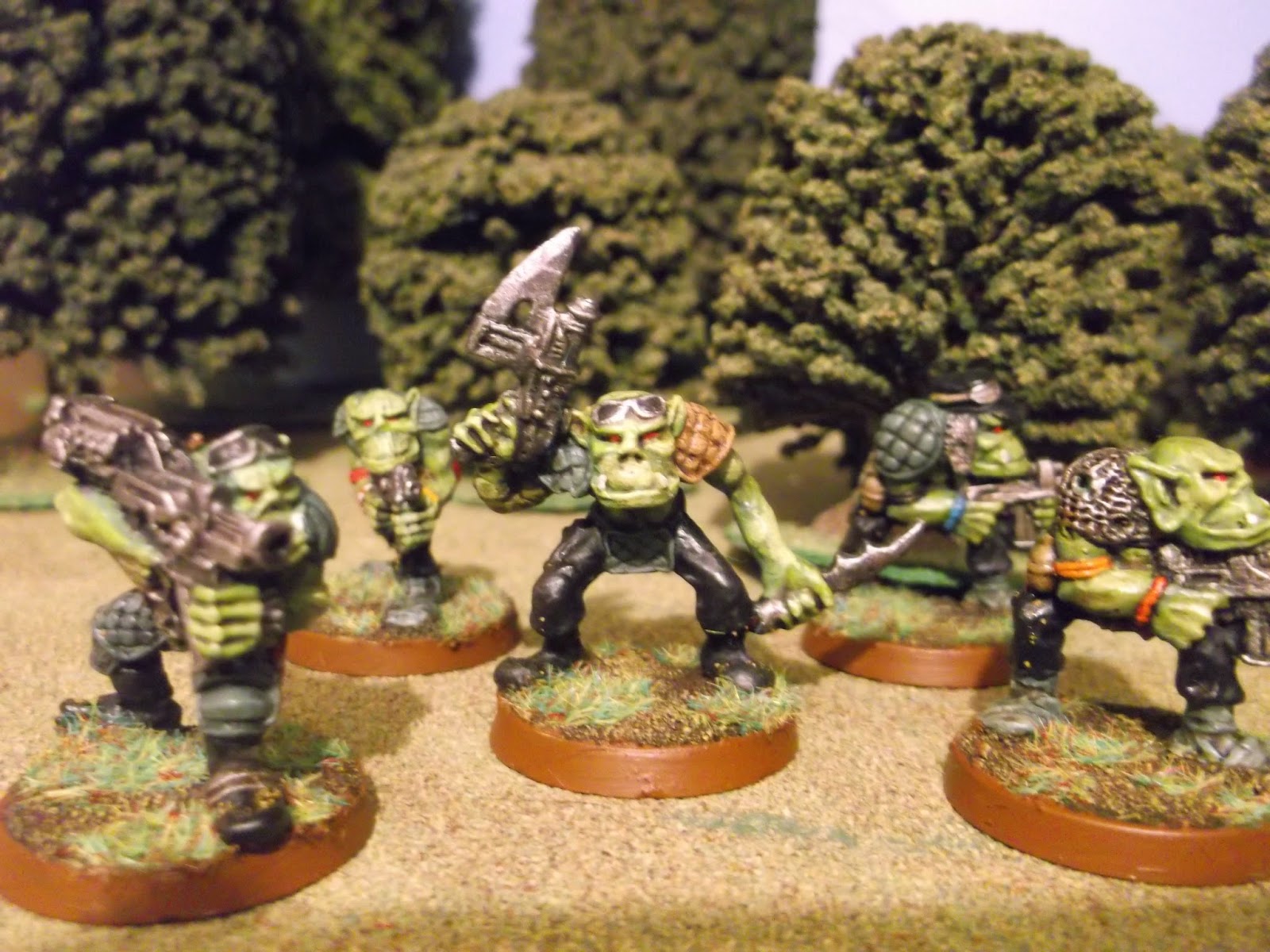 As the box set is a few Orks sort of the full number needed I added some of the RTO2 Space Ork models to act as squad leaders. I used the same one I used in Thrugg's force, which are the same ones used in the photographs of the battle scene of the 'Battle at the Farm' in the Rogue Trader Rulebook (page 65).
All of the Squad leaders, both from the boxset and those not seem to be based on the same inital sculpt. I think that adds a nice extra little touch of detail.
Here the squad leader model is 'Gog the Gogler'.
The model on the front left side is the Heavy Bolter Ork from the Space Ork Raiders box set. 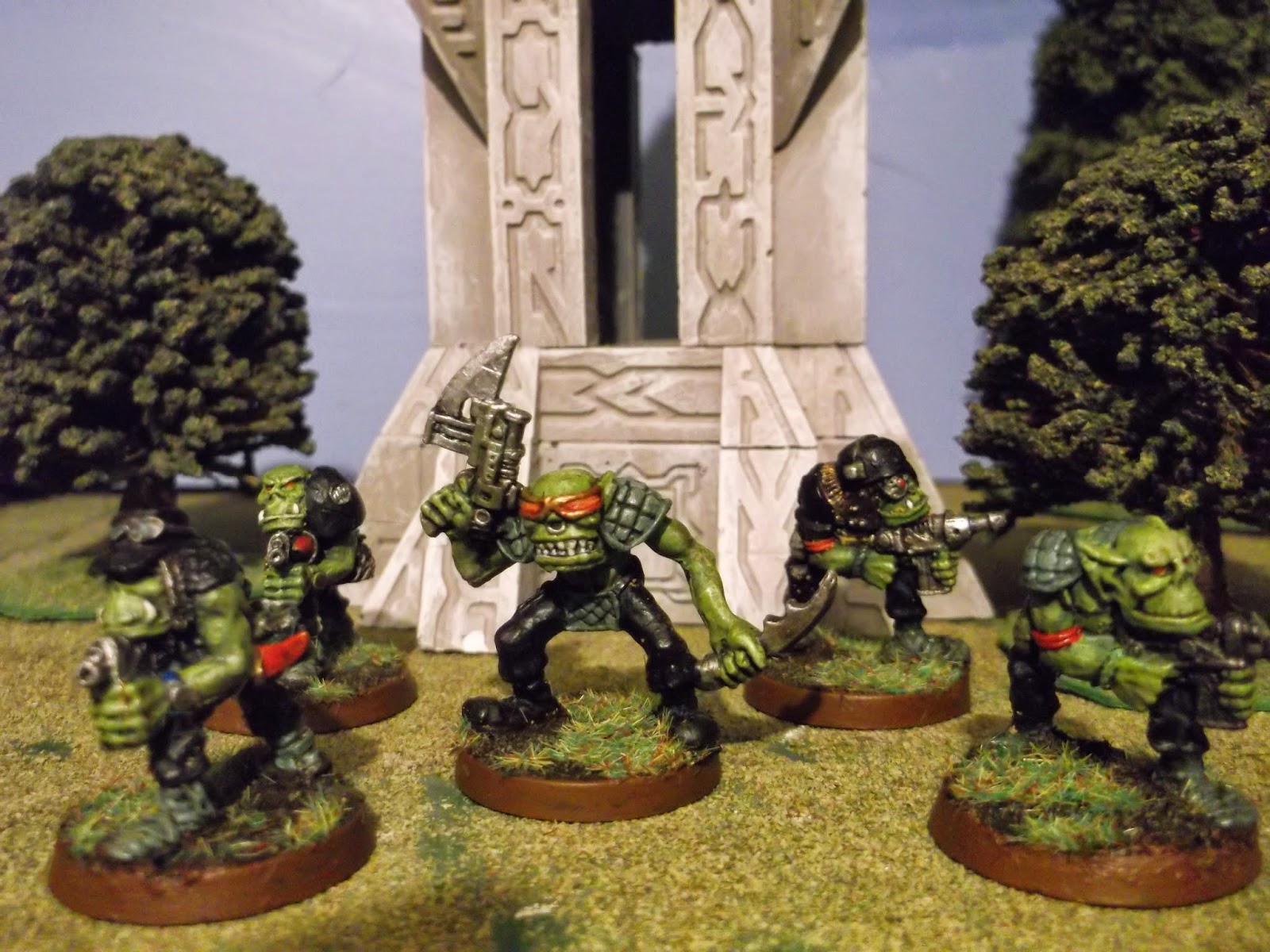 Another squad, lead by 'Smiler Bogit' 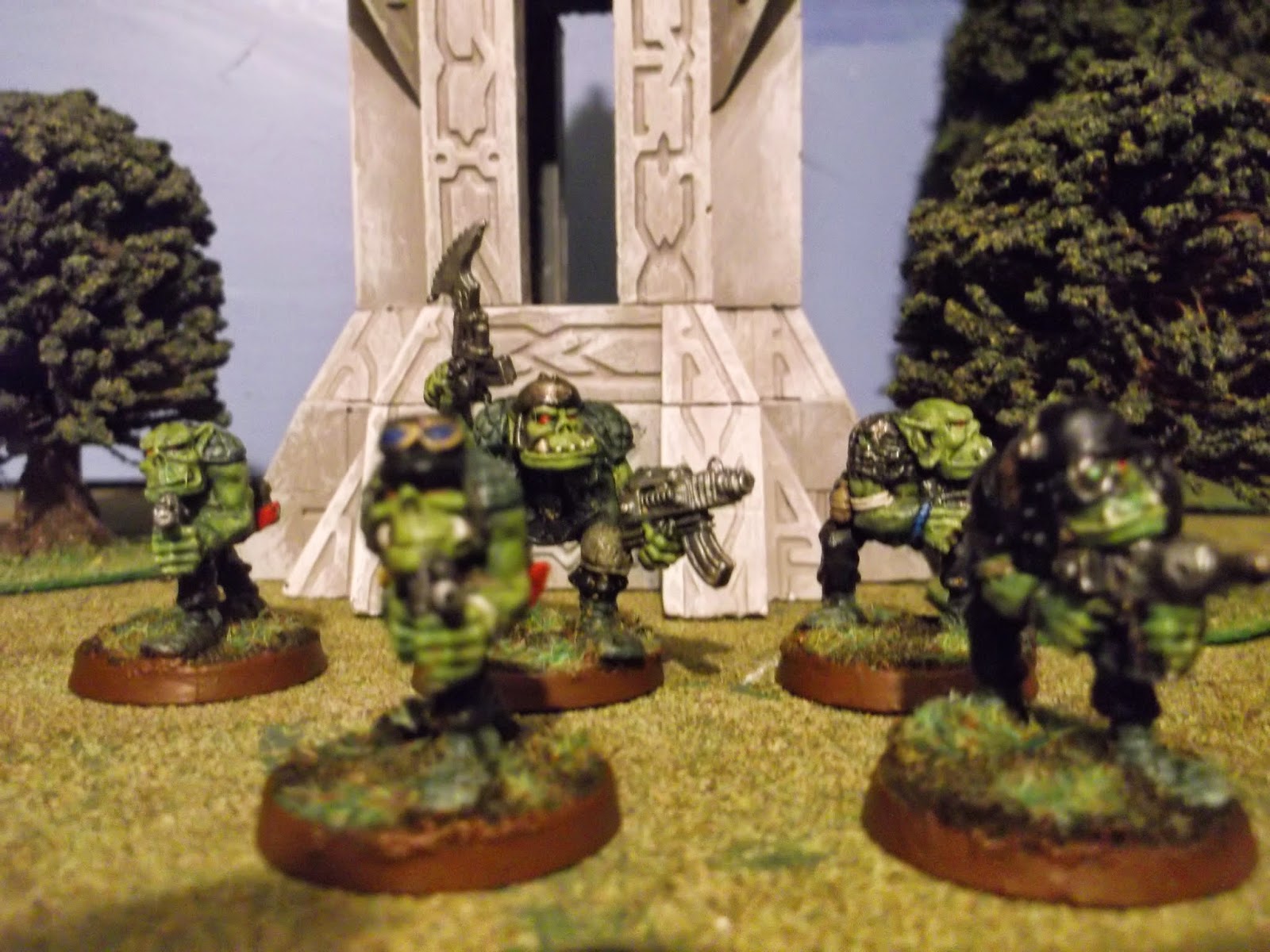 The final squad, lead by another model from the Space Ork Raiders box set. 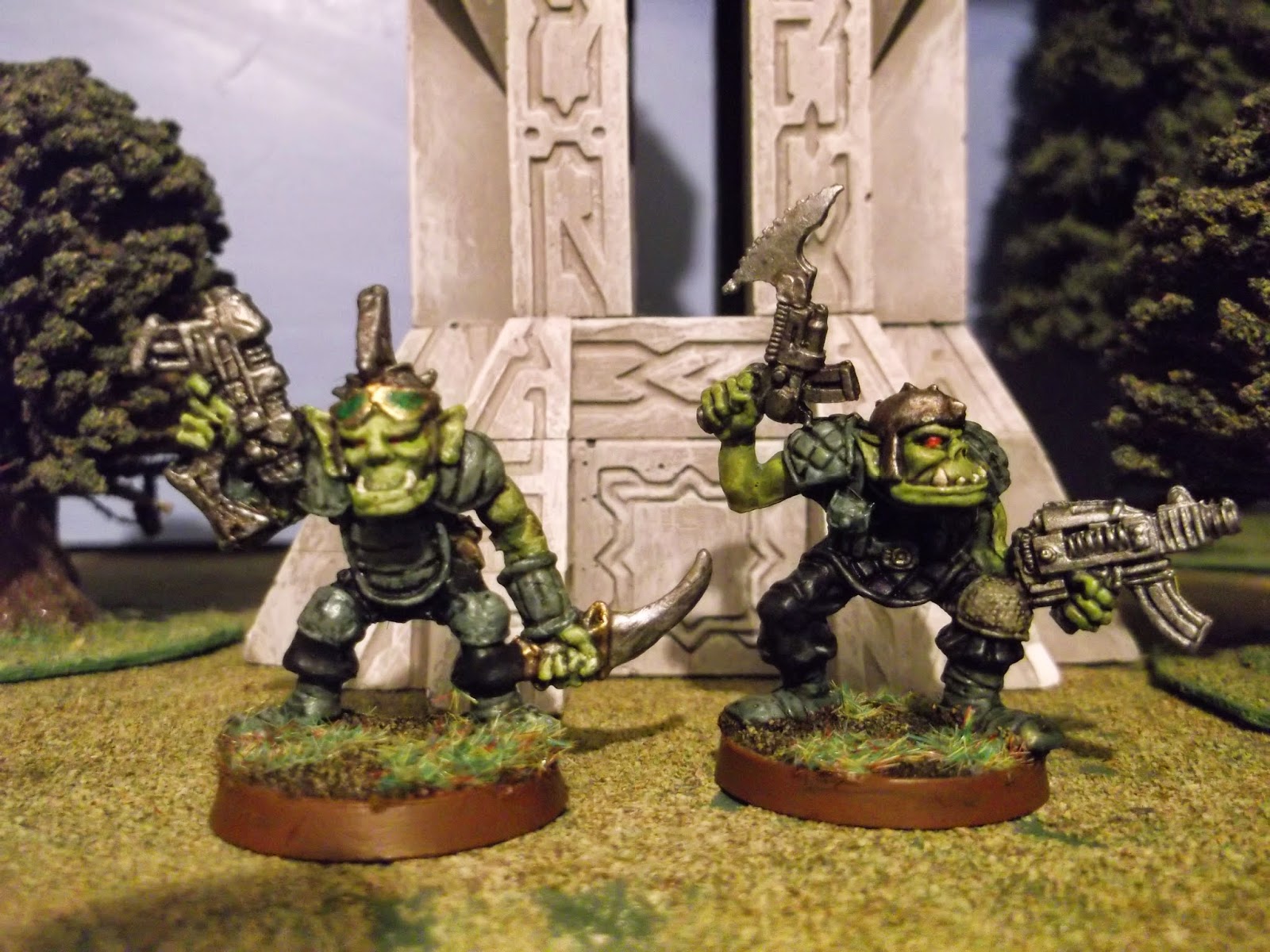 The 2 Squad Leaders from the boxset. 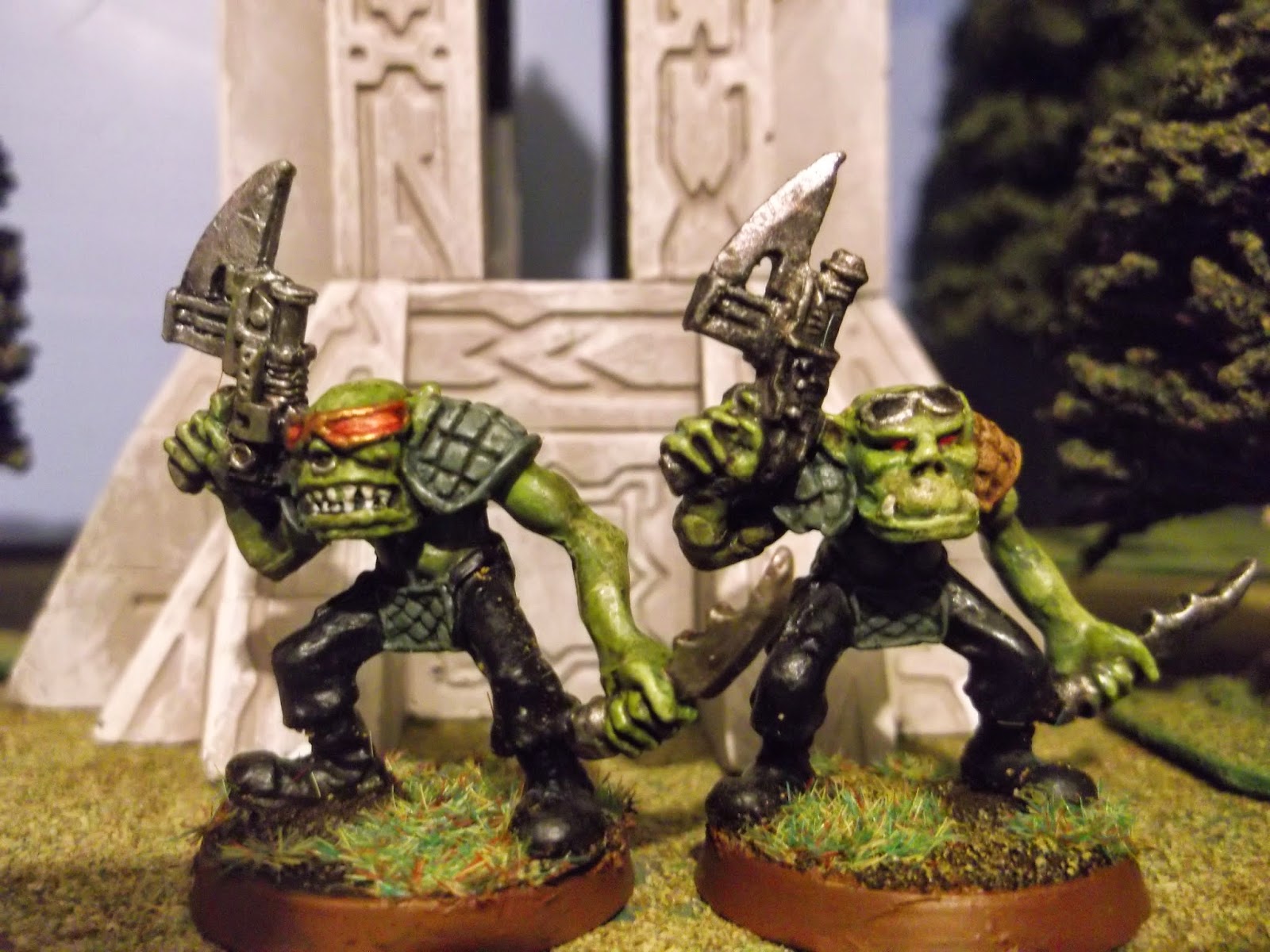 The 2 Squad leaders from the RTO2 Space Ork range. 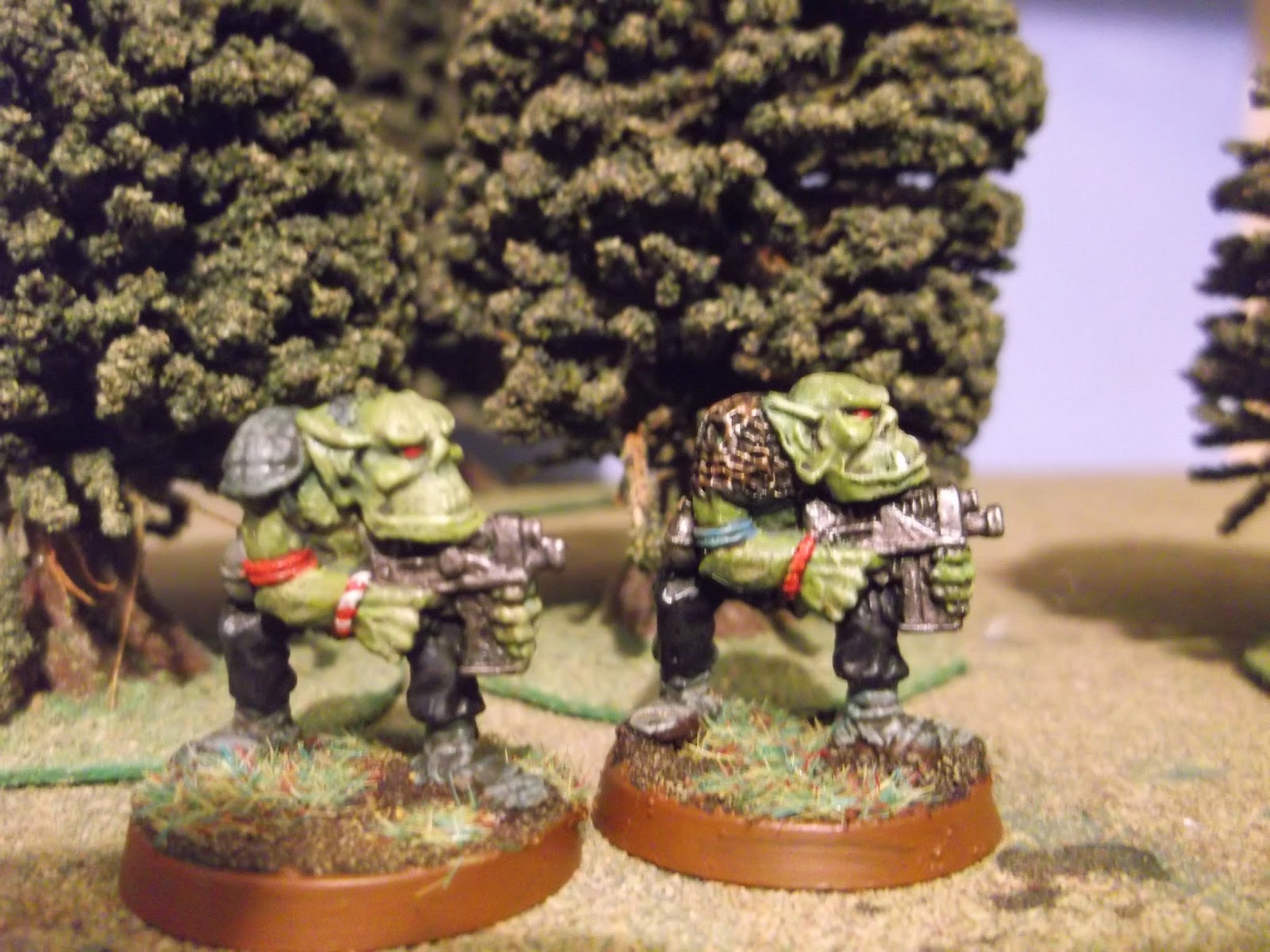 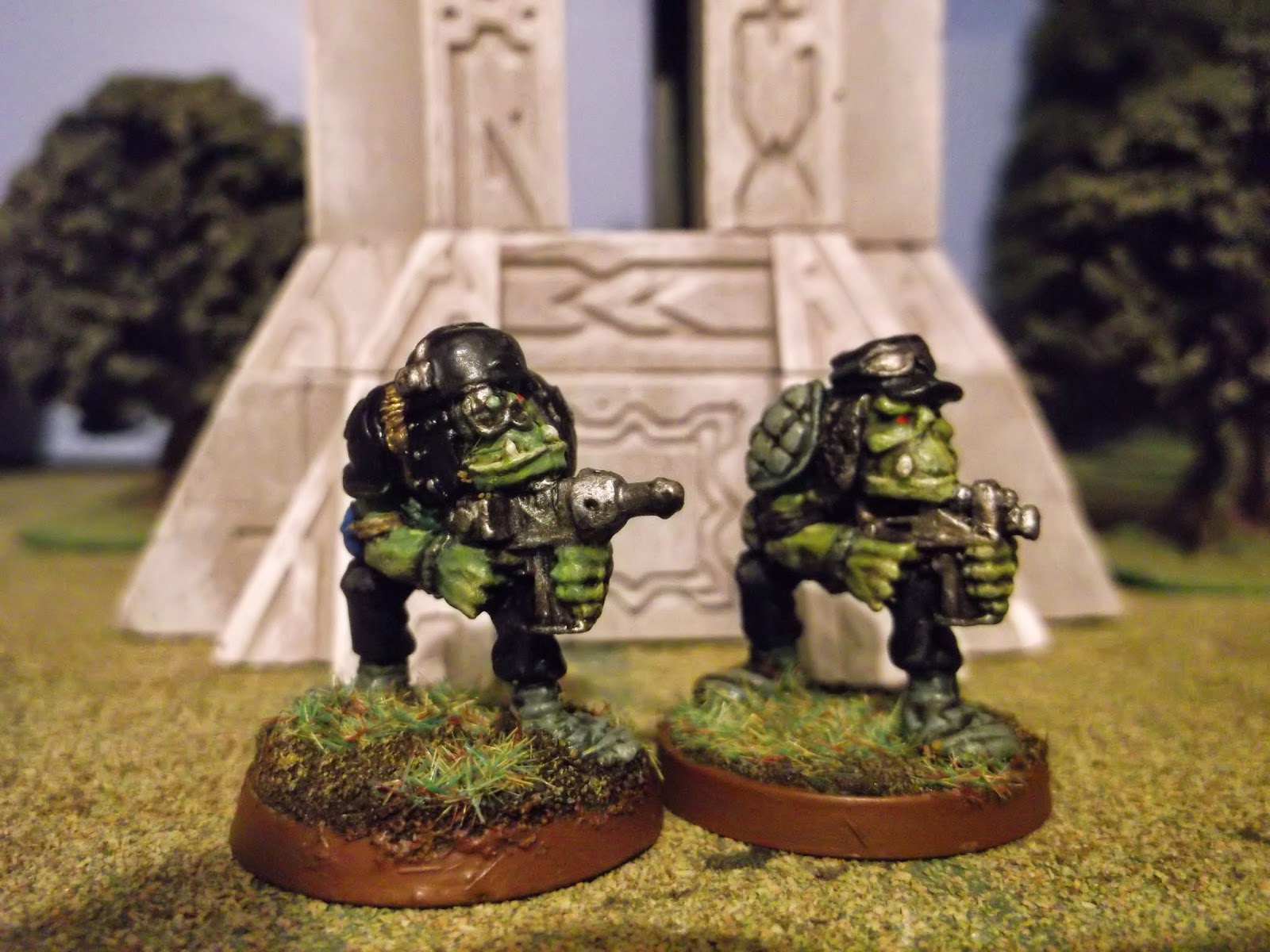 2 more Troopers, one with helmet and the other with a forage cap. 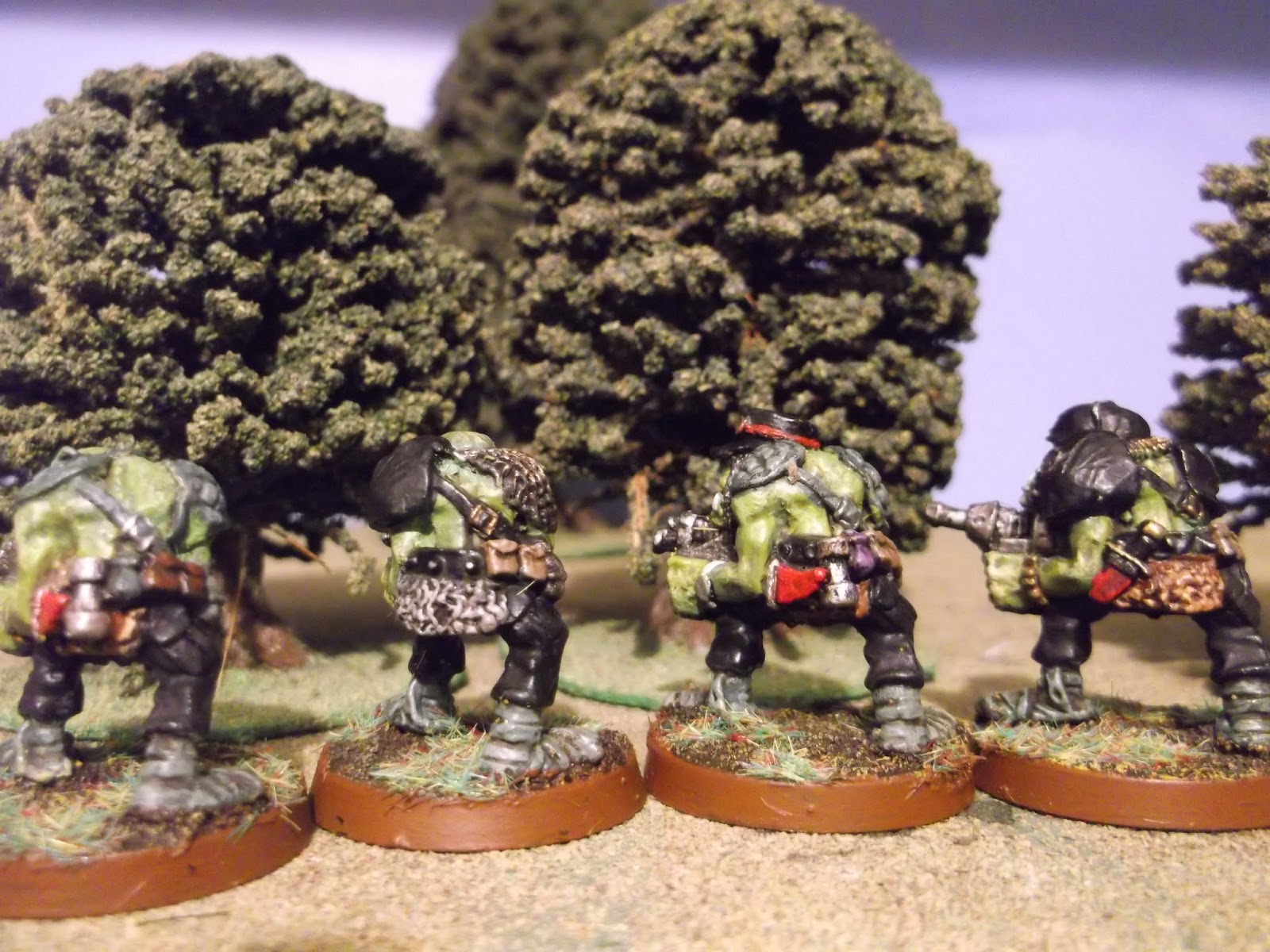 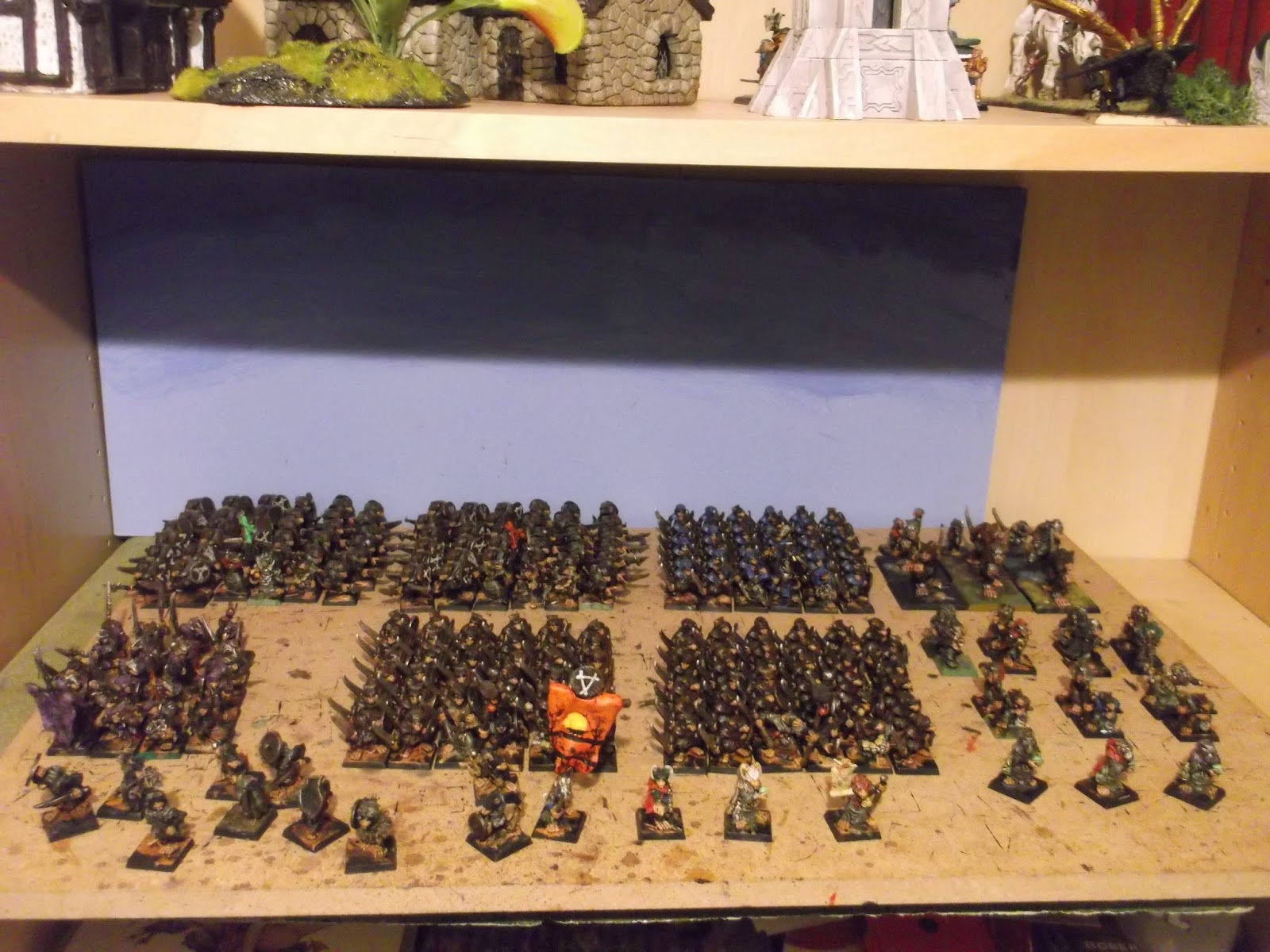 After the Orks, I still have the 3rd Edition Warhamer Fantasy Skaven army to base, so that will be my next thing to do.

Next weeks blog update will be a focus on a single thing. After an e-bay win completing the set, I will update on Tom Meier's CP3 Troglodytes box set, released in the early 1980's. It will be a companion update to the update I did earlier in the year looking at Tom Meier's CP4 Lizardmen box set.
Posted by Goblin Lee at 00:50