This weeks blog update is focusing on one particular set of miniatures: the "Citadel Presents: CP3- Tom Meier's Troglodytes".

Earlier in the year I posted an update in Tom Meier's Lizardman box set, produced in the early 1980's, which can be found here: http://goblinlee.blogspot.co.uk/2014/03/tom-meiers-lizard-warriors-box-set.html
I have always been a fan a Tom Meier's sculpting, and have collected a number of his Lizardmen, and occasionally, his Troglodytes.

After a recent e-bay win, I have now completed the set of Troglodytes which comprised the CP3 Troglodytes box set which was released as a companion to the Lizardman box, in 1984. I never set out to collect the set of Troglodytes, but after doing the update on the Lizardmen I gained a renewed appreciation for them. So, I decided to buy the final pair which I required as apart from being useful for gaming (and finding a home in my Slann army) and because they are beautiful miniatures. My only regret is that I have not, as of yet, got around to painting them, so apologies for the unpainted state of the models.

As with the Lizardman update, I have photographed the models to provide a more detailed record of the models and to introduce people to an often overlooked set of models which I personally think deserves more attention.
Enjoy :) 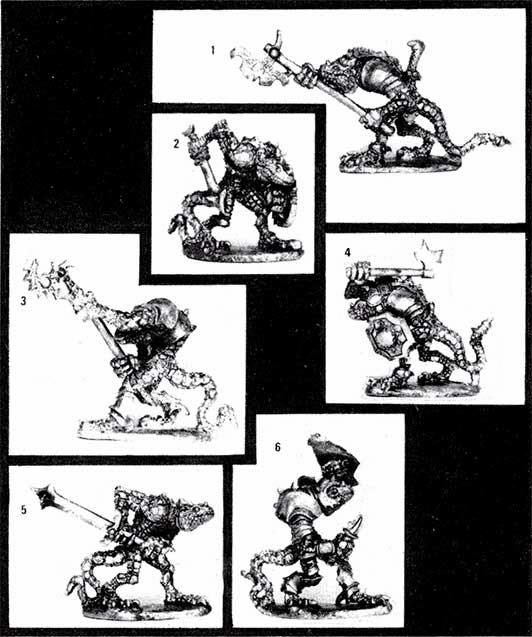 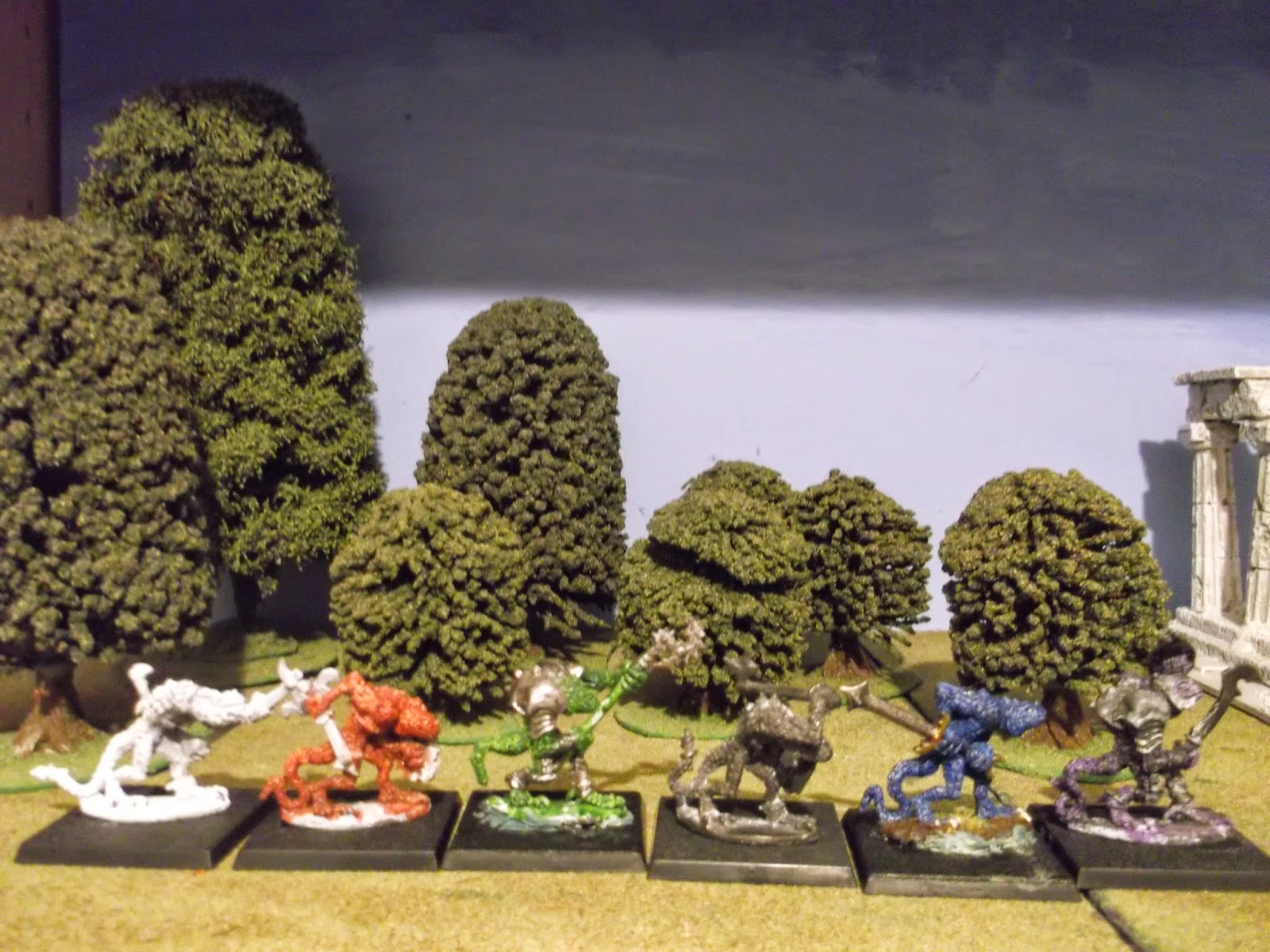 The miniatures themselves, mounted on 40mm square bases.
All of the bodies seem to be based on a single master model, and be variants of that.
The style of the miniatures are skinny, lithe, and wiry, rather than bulky as with later models. The heads look more Lizard-esque rather than the Crocodilian like the C19 series Lizardmen. 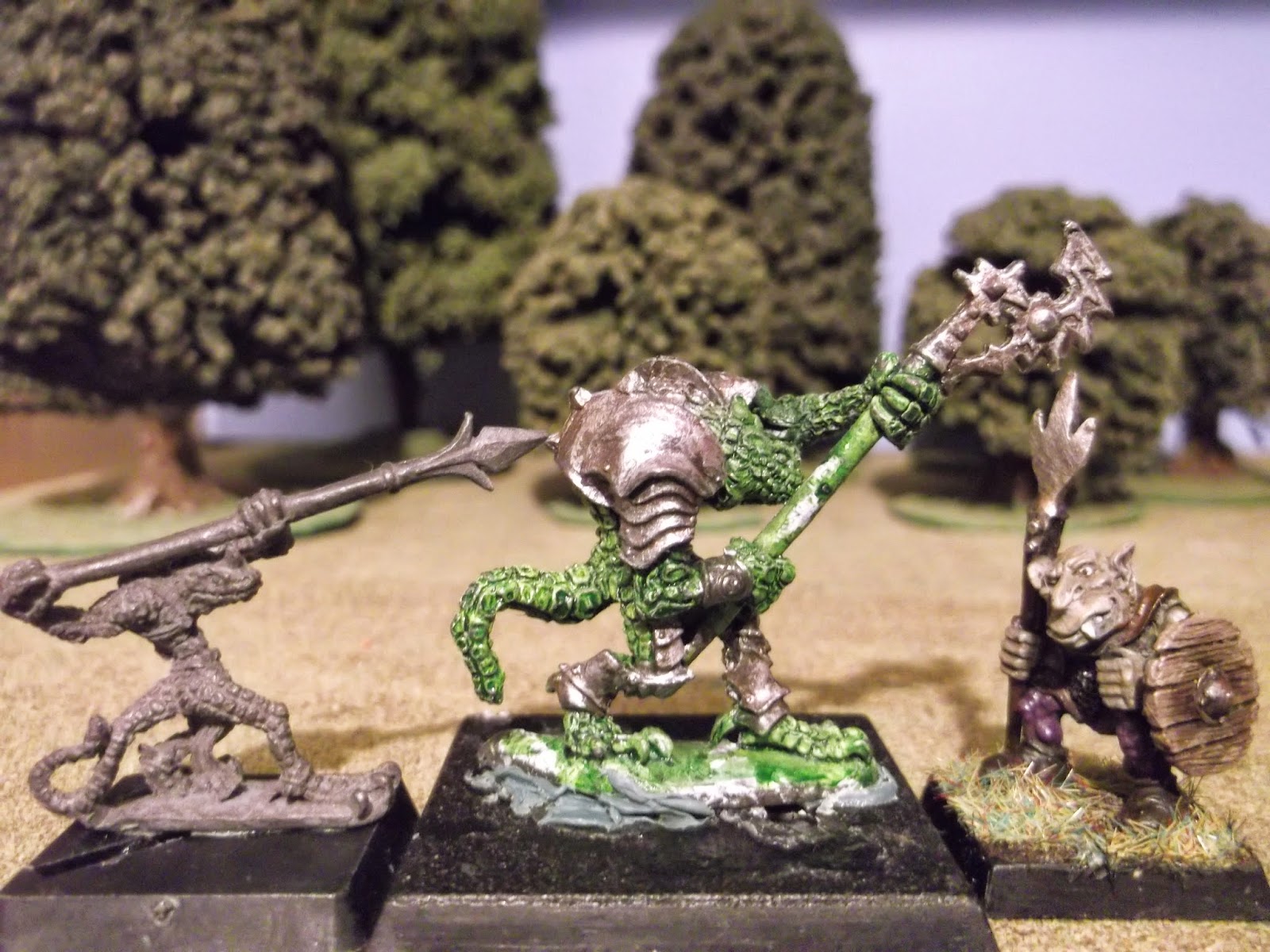 Scale shot to give an idea of the size of the miniatures.
Despite being larger than the dinky Tom Meier's Lizardmen, the Troglodytes are actually quite larger than the Iron Claw Goblin on it's right. 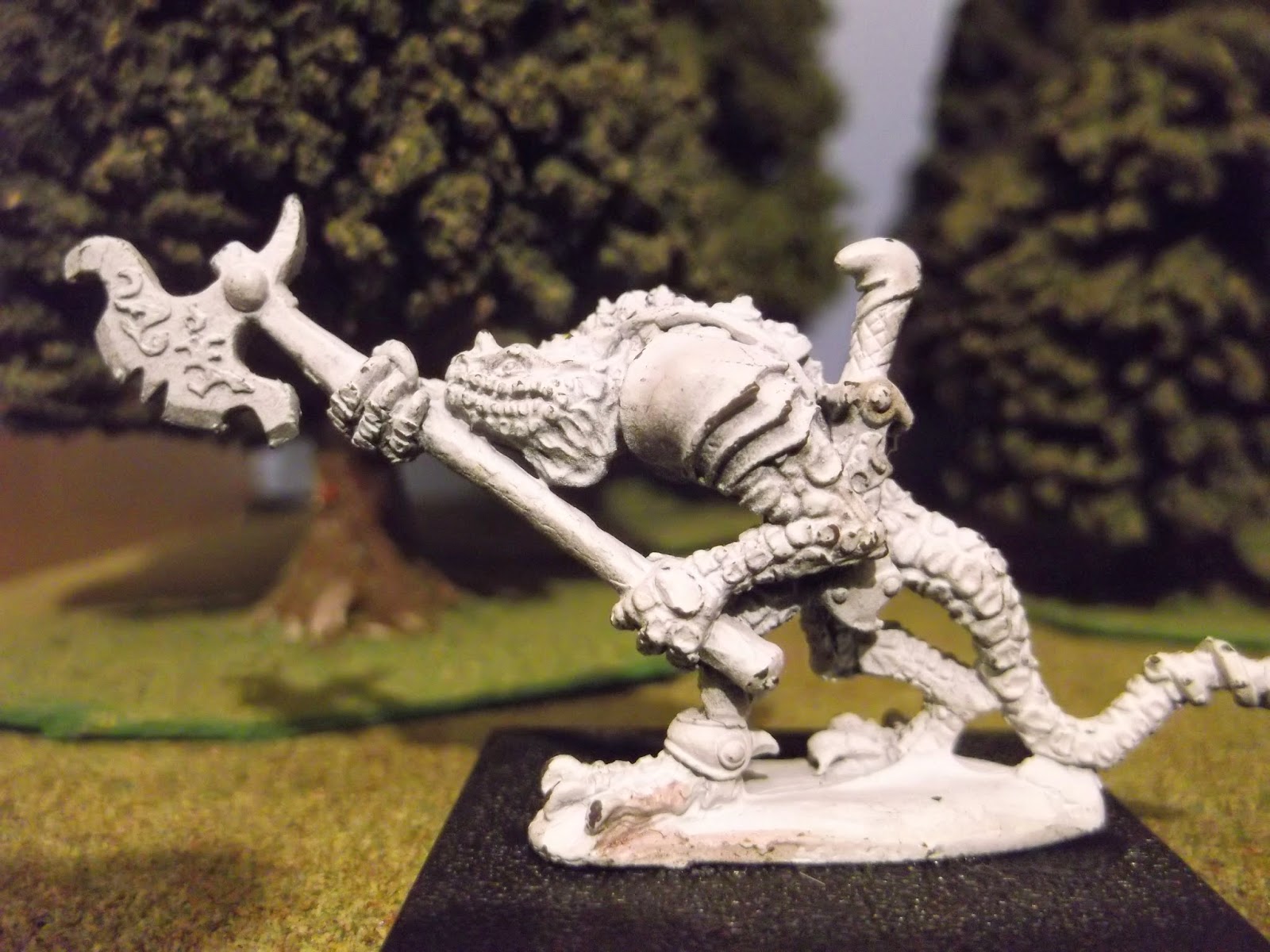 1. Troglodyte with Halberd.
The first model in the set is a halberd wielding Troglodyte. As with all of Tom Meier's sculpts there is a great attention to detail, especially considering the age of the sculpts. The detail on the blade has runes and arcane writing on it, as well as the detail on the sword hilt, and the expressional face. 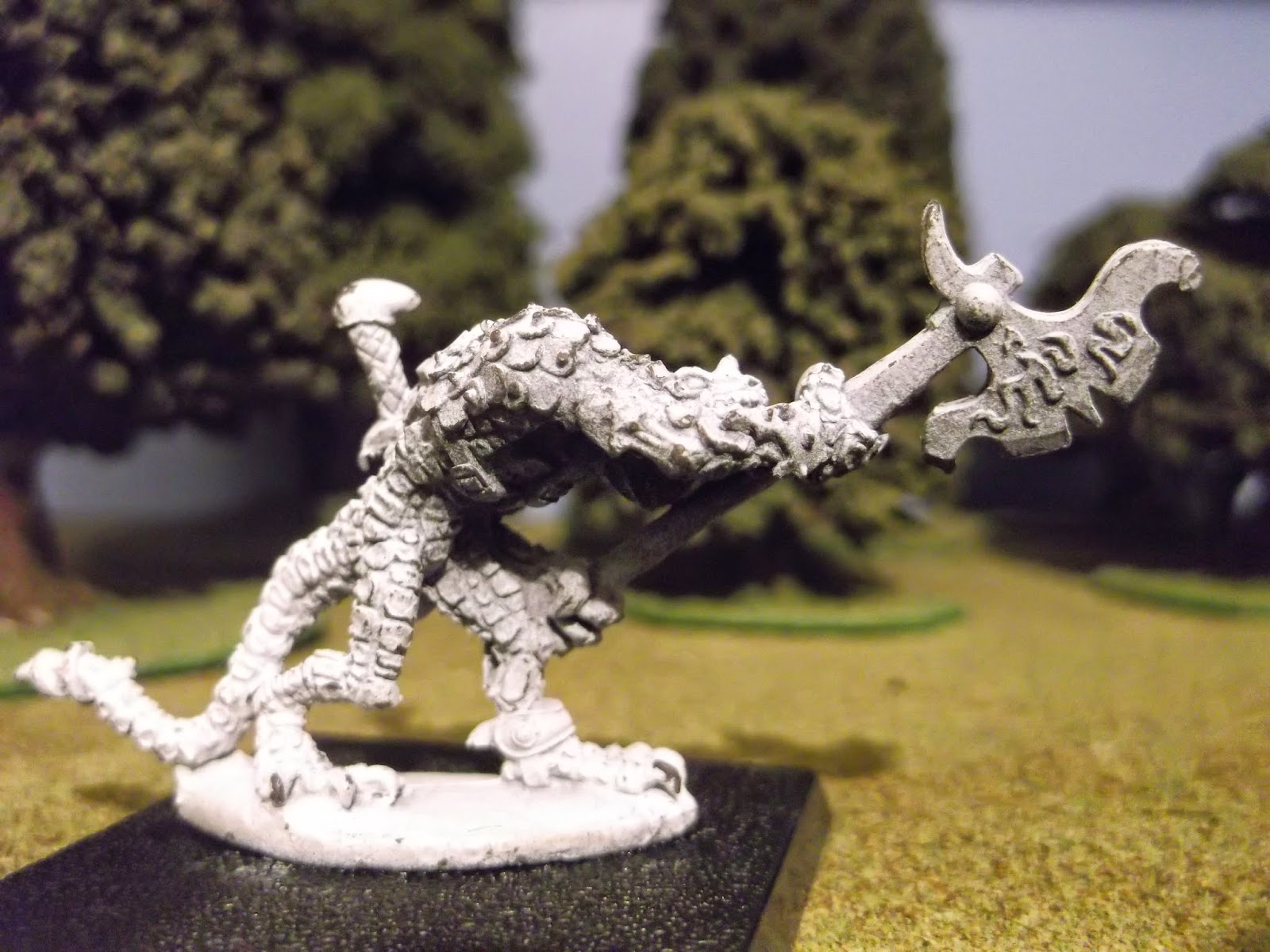 The right hand side of the model showing the body and scales clearer. 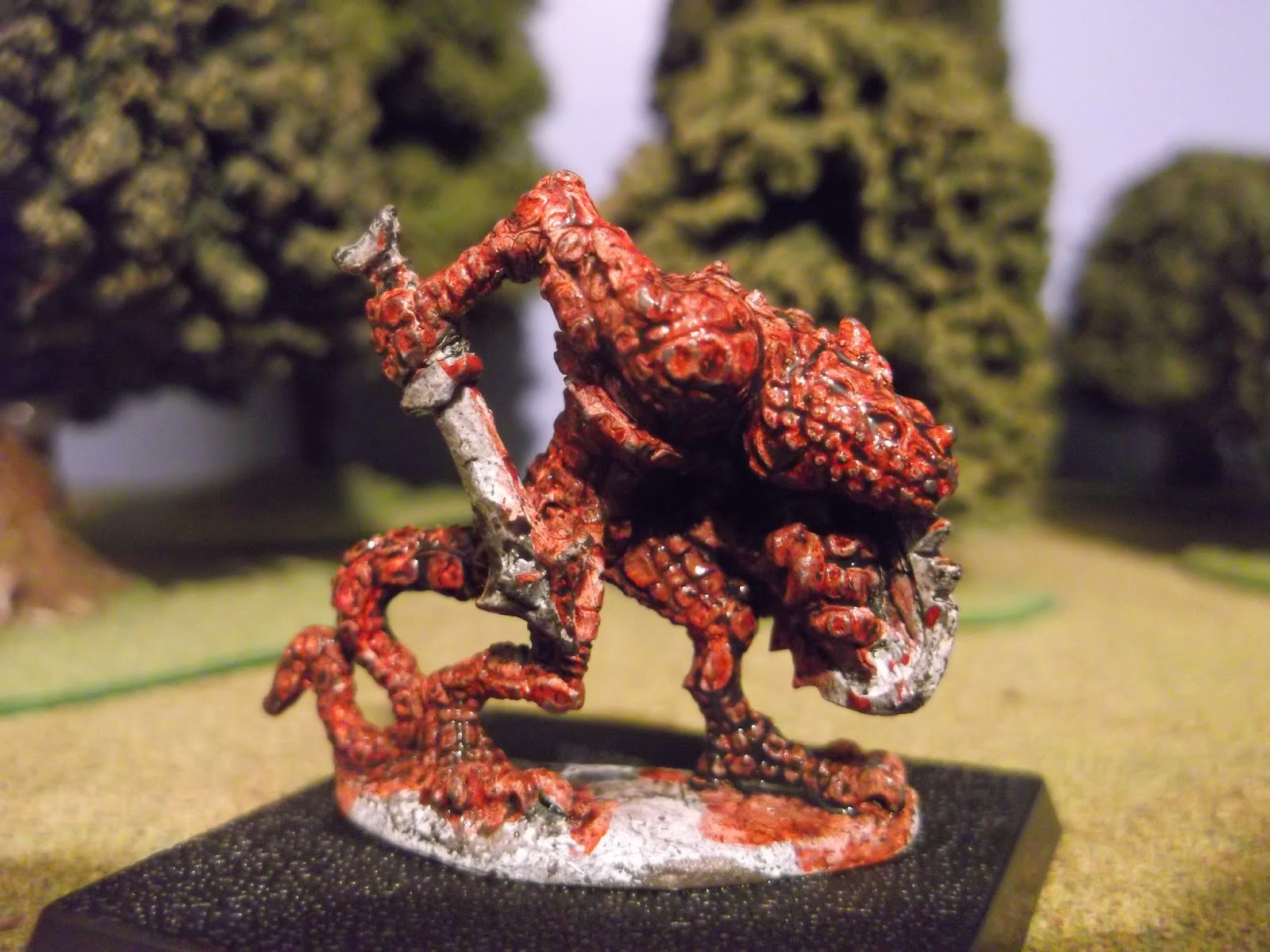 2. Troglodyte with spiked sword.
A Troglodyte armed with sword and shield, and although what maybe unlcear from the photograph the side end of the blade of the sword has a spike on either side of it, hence the name. 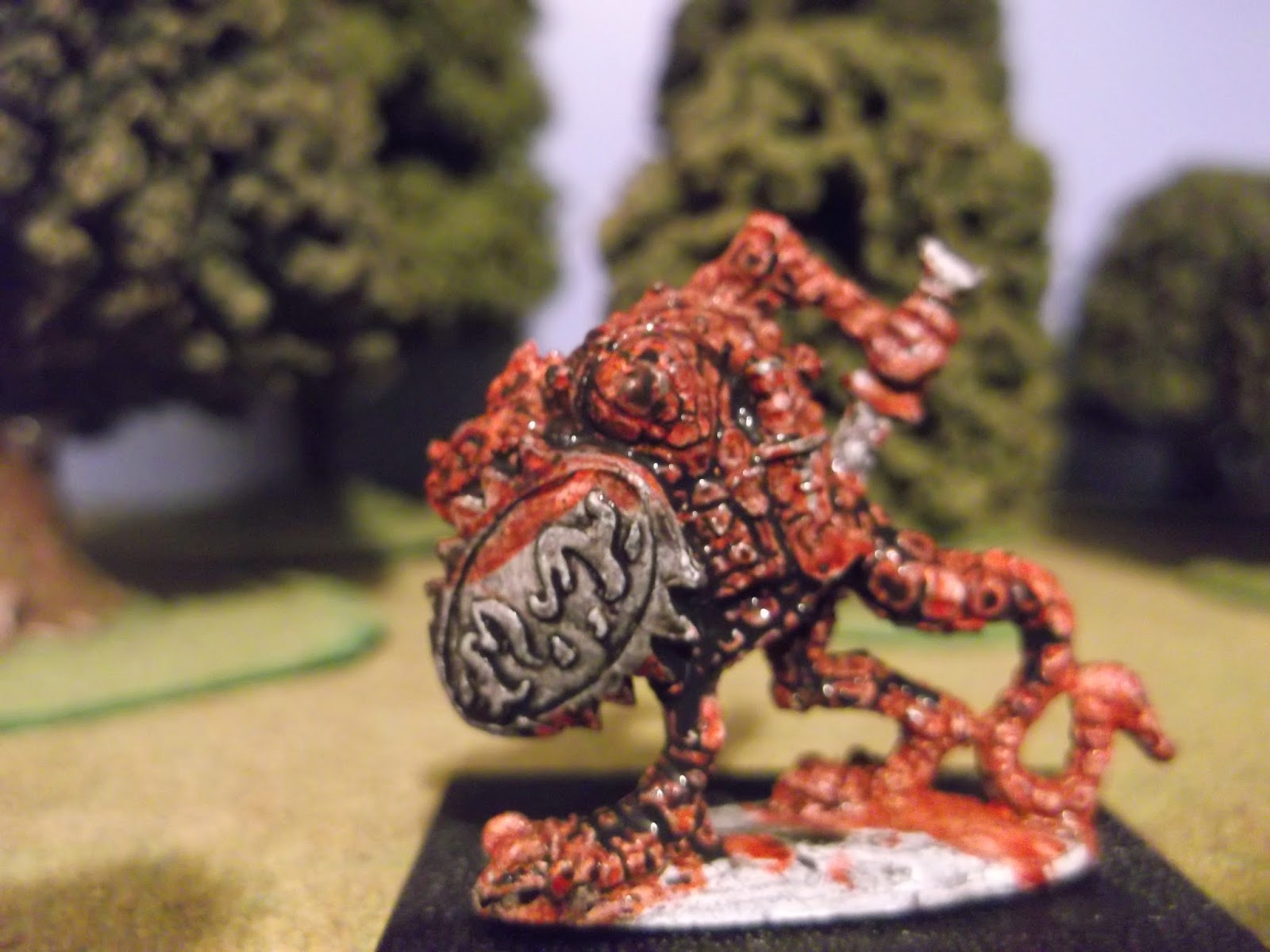 The left side of the model shwoing the detailing on the shield. I love the esoteric runes which to me evokes the First and Second Edition Warhammer magical details of the background and adds an air of mystery and wonder. The ridges on the shield are also a great touch. 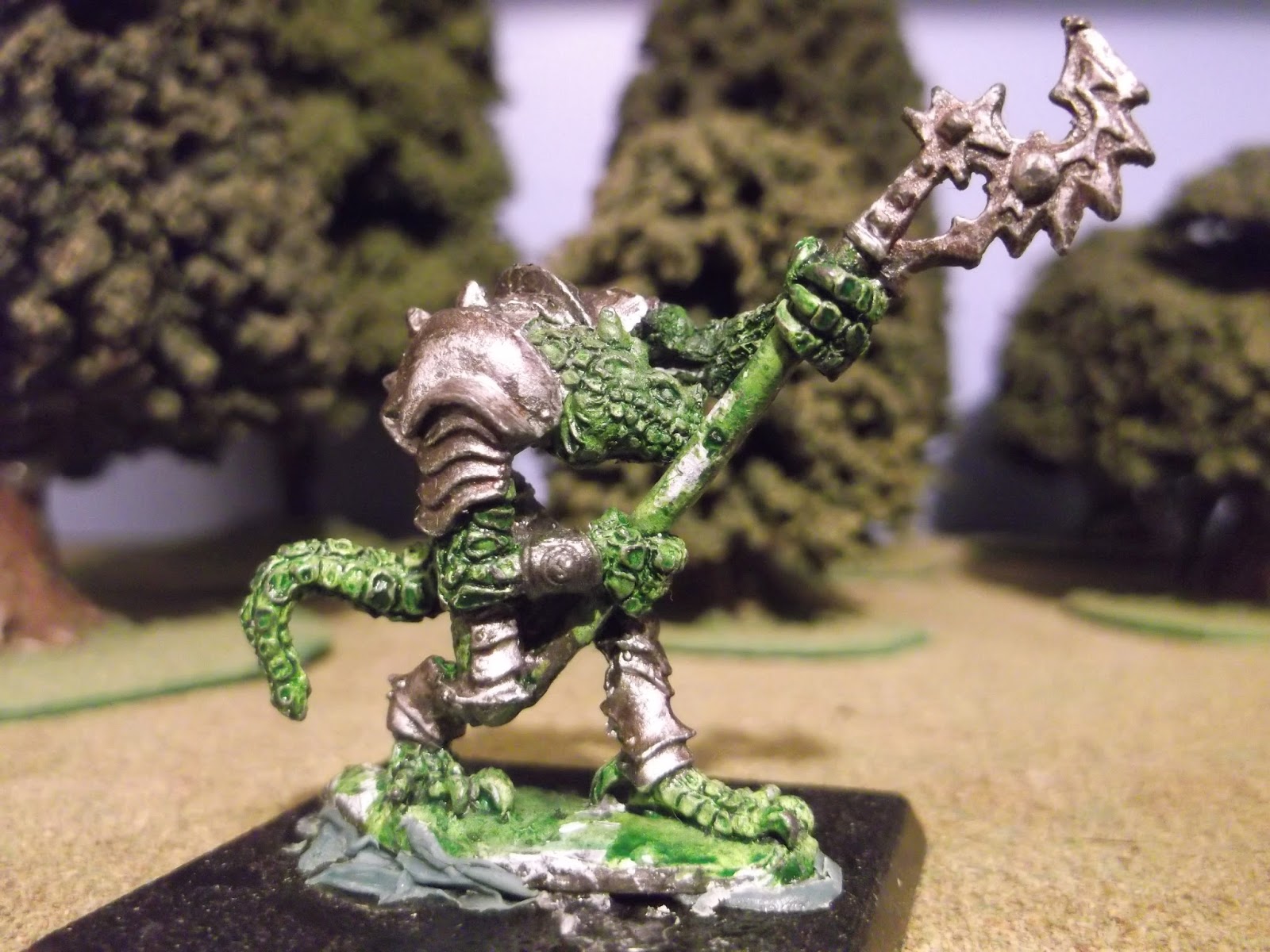 3.  Troglodyte attacking with Halberd.
Another excellent sculpt, wielding another halberd. The halberd does not have the runes like the first, but a magical looking lightning design. The heavy armour looks perfect for the Troglodyte's frame. 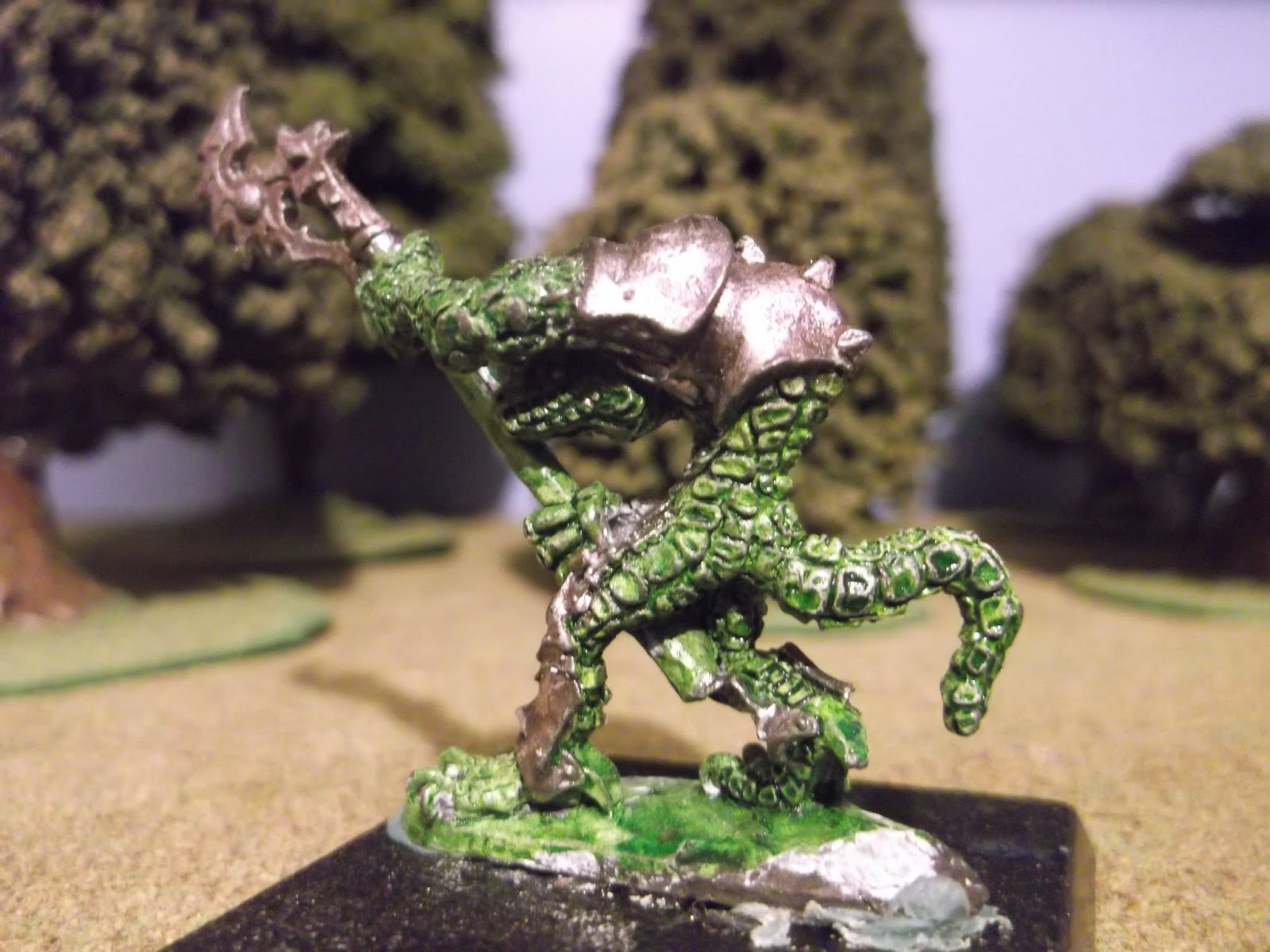 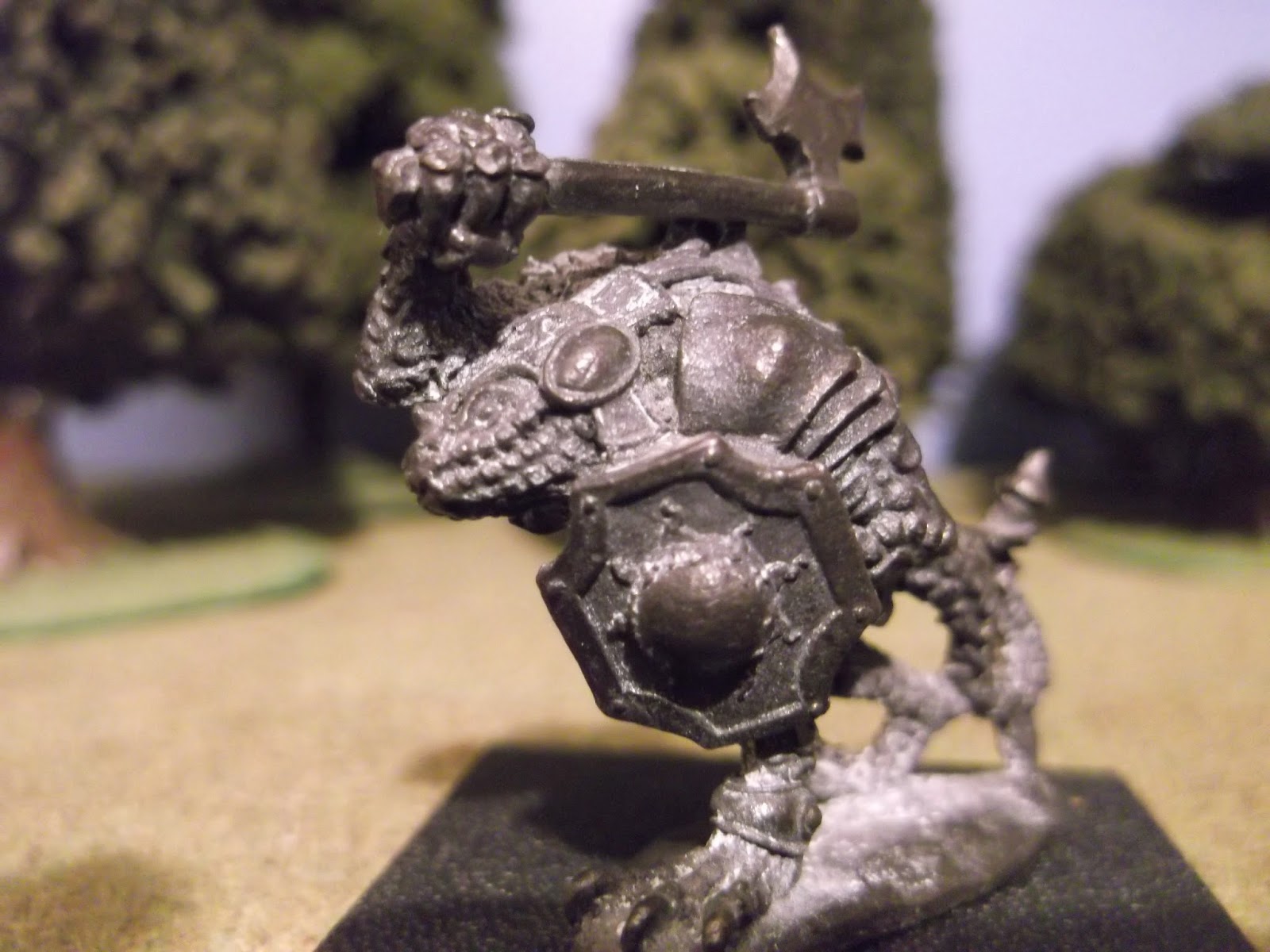 4. Troglodyte with Axe.
Axe, heavy plate armour, and a solid looking shield with blazing sun device on it. 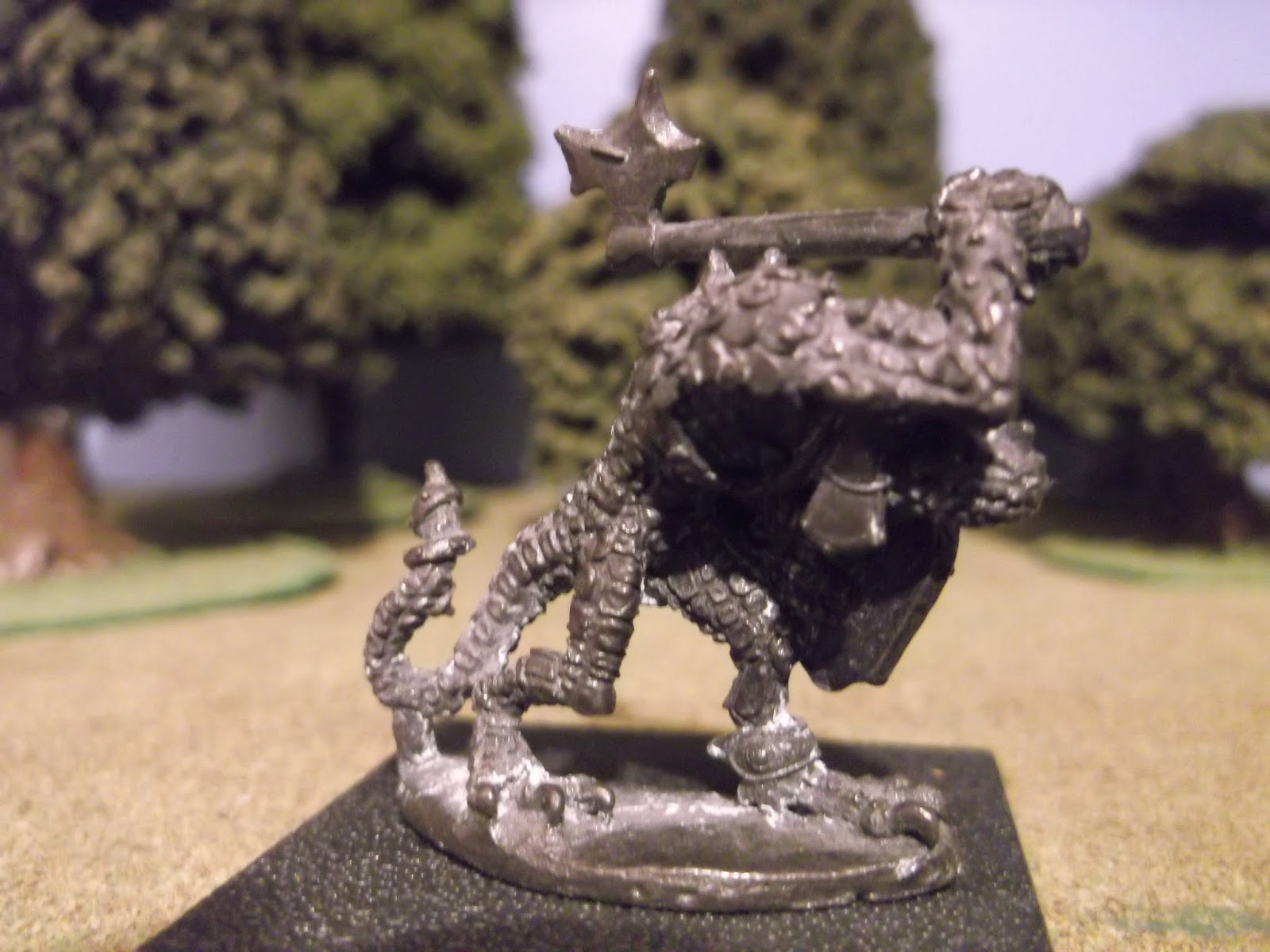 Right hand side.
I particulary like the shape and design of the axe which seems to give the miniature an even more fantasy feel about it. 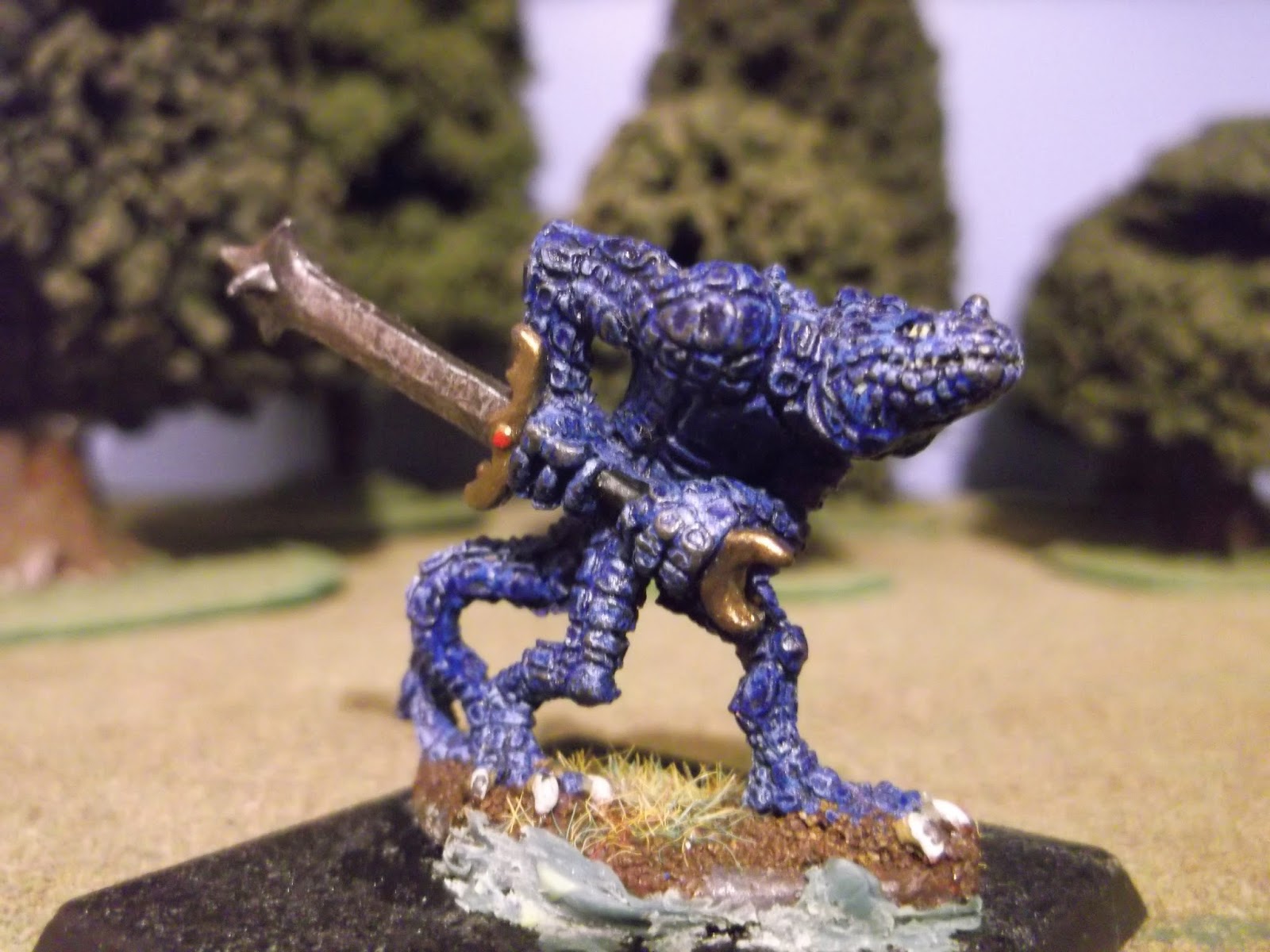 5. Troglodyte with a Spiked Sword.
Another Troglodyte with a spiked sword, this time a double handed sword. The half-moon pummel of the sword is another great mystic detail.
This miniature is featured in artwork on page 28 of the Warhammer 2nd Edition Battle Bestairy. 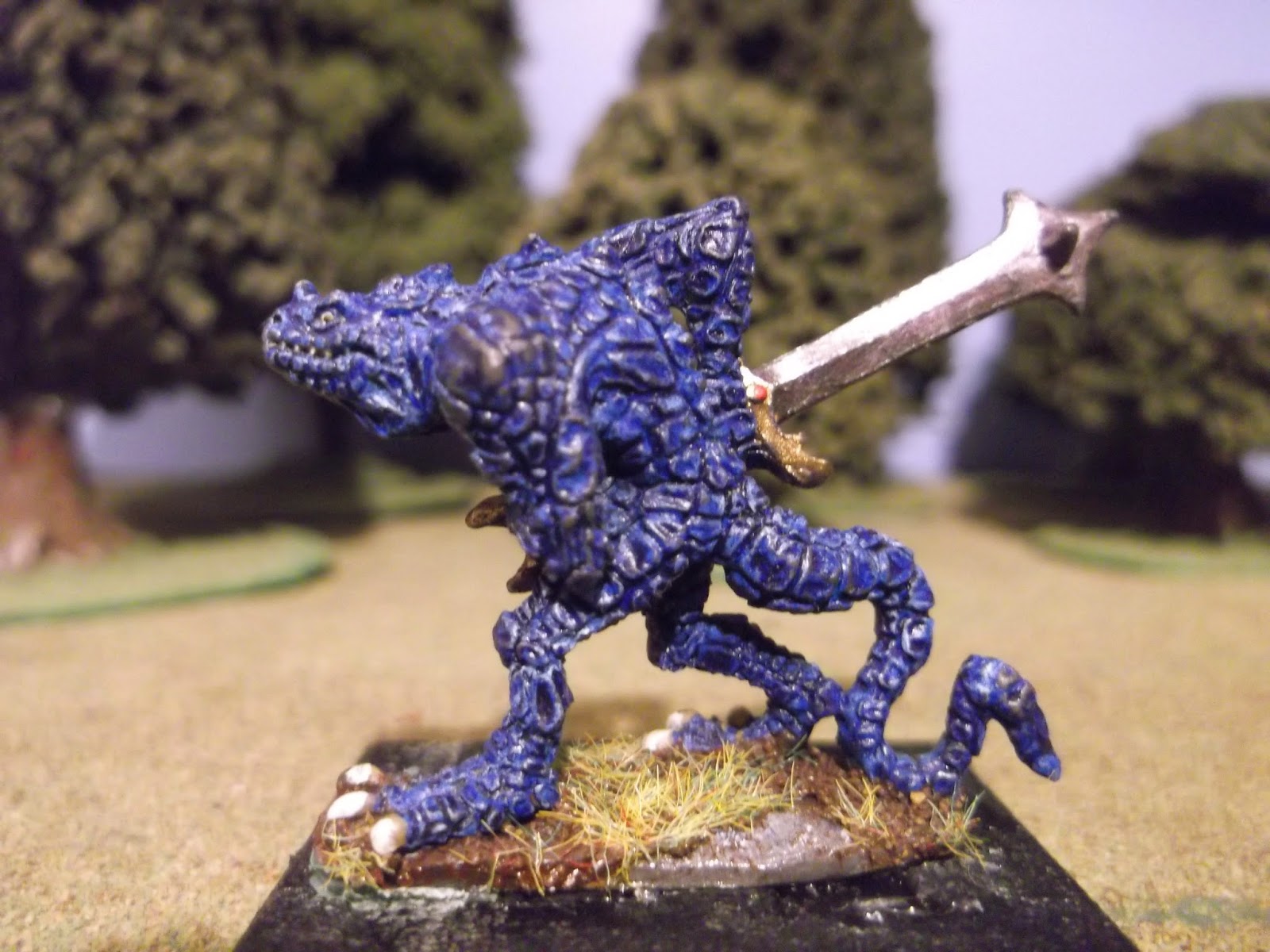 Left side showing more scales, and a clearer look at the spiked sword end. 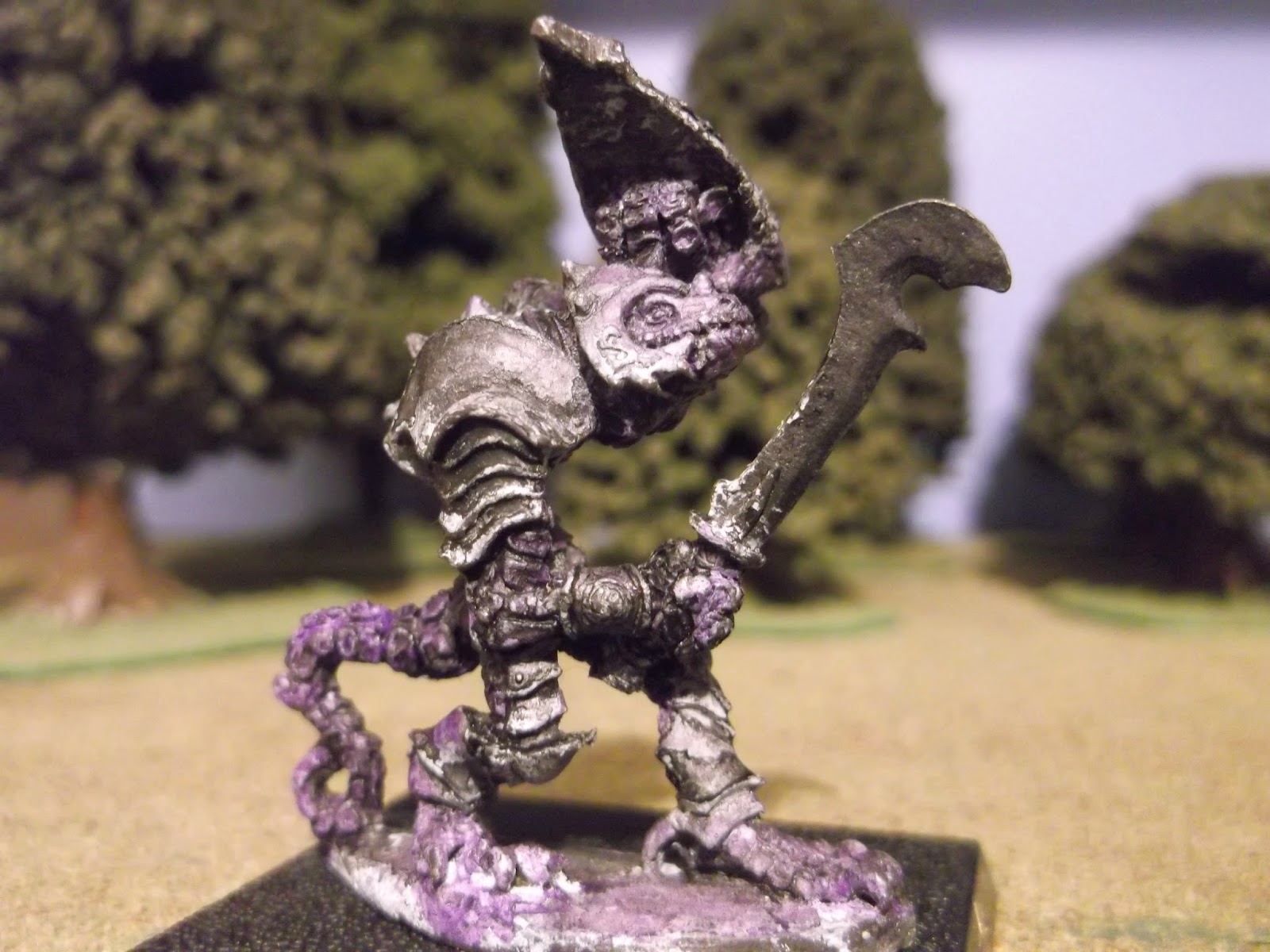 6. Troglodyte with Cleaver.
Perhaps my favourite looking of the weapons in the set, a hooked and curved sword. It does'nt look much like a cleaver, but has the feel of something which could lob off a limb or head with ease.
The armour is the same style of overlapping plate which is used throughout this set, and suits the models. I think it is nice that the armour cover the legs as well, rather than just the upper torso and arms. 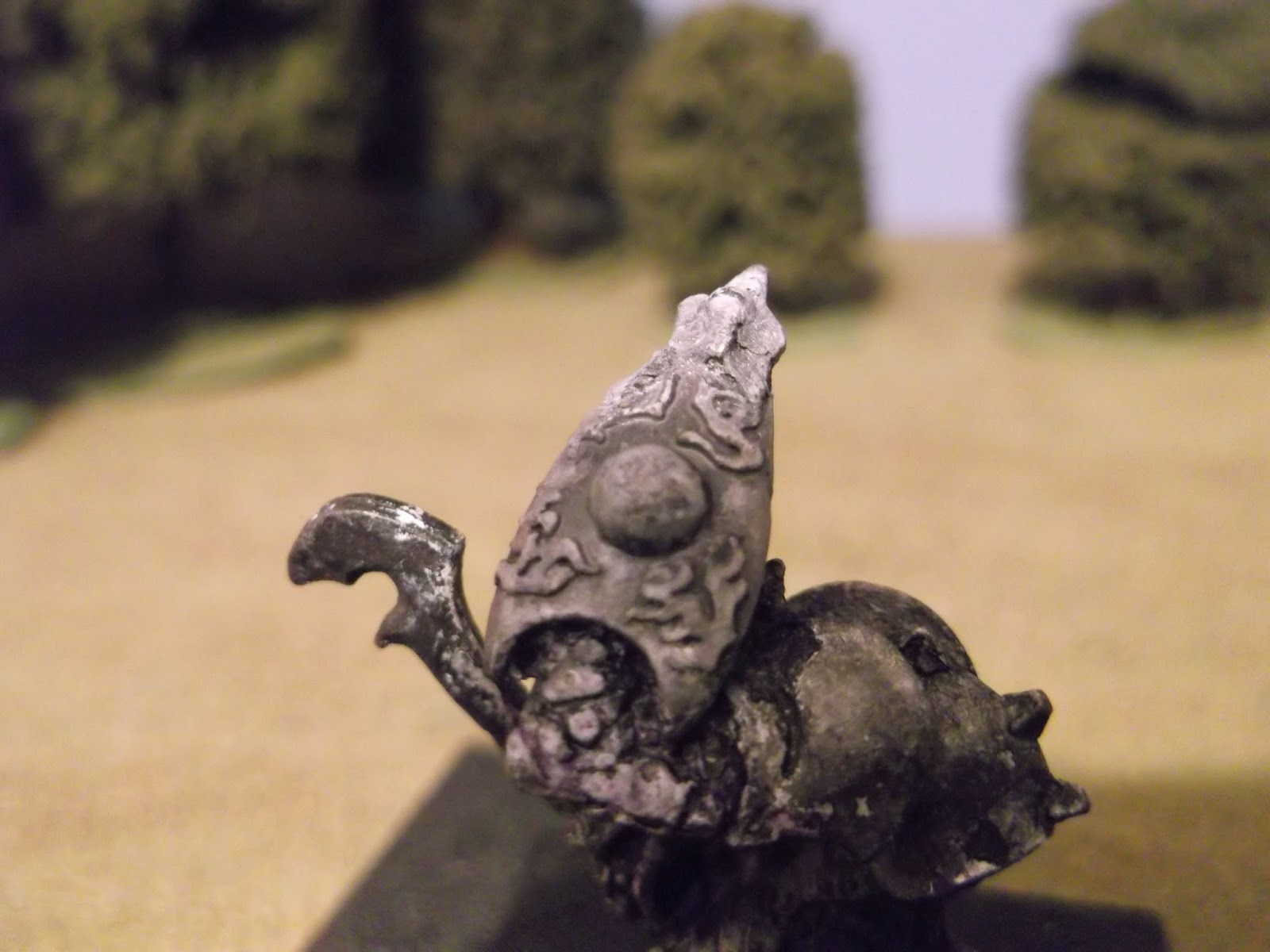 Close up of the shield details. 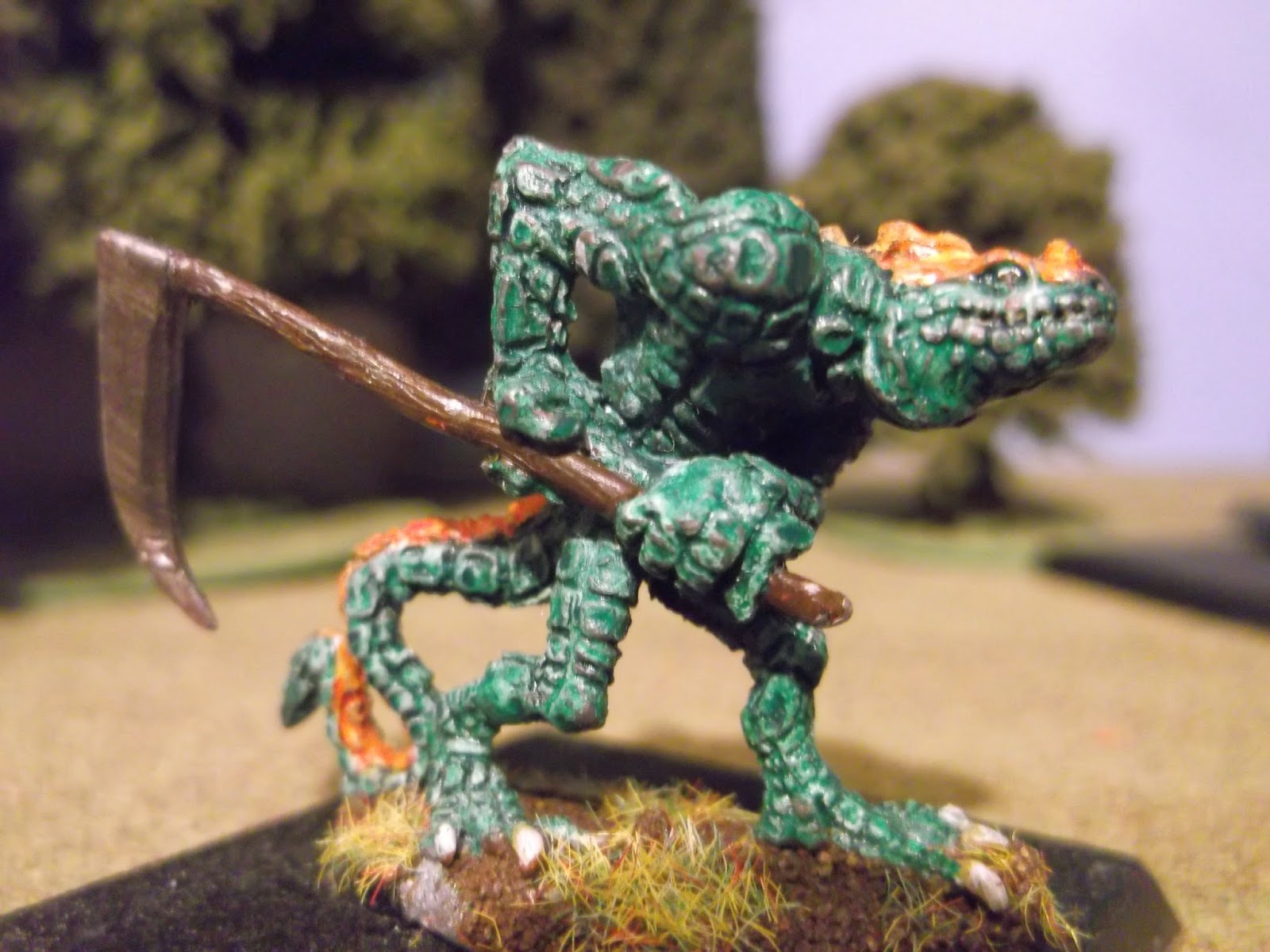 This Troglodyte with a scythe is not part of the set, but is definitely a Tom Meier sculpt. I am not able to find a reference for it, but I am sure he is present somewhere. 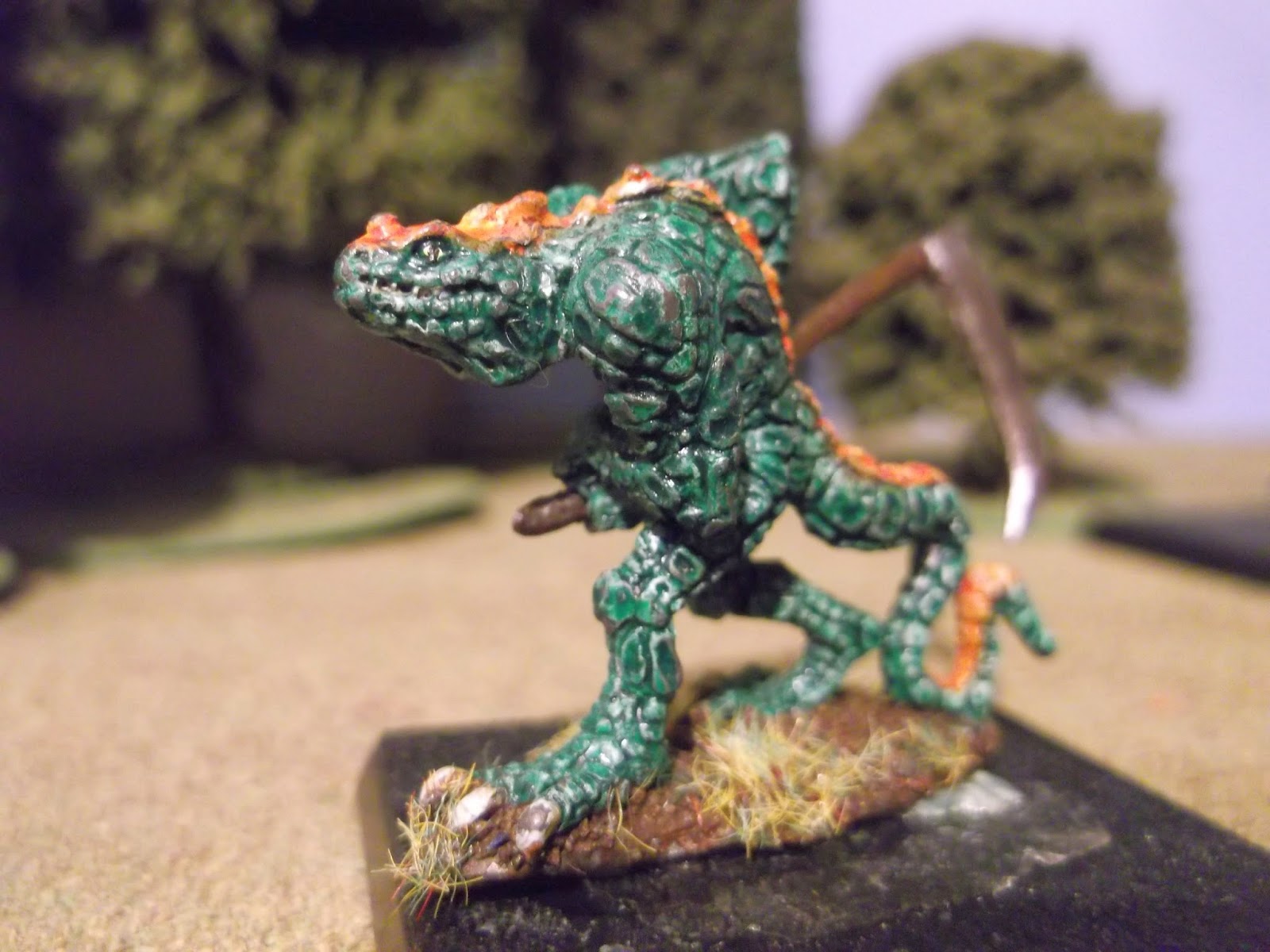 Left hand side, with that great Lizard grin expression.

Not sure on next weeks update, I have several projects ticking over, but have now decided on which to pursue.
Posted by Goblin Lee at 22:33