Yet more Squats, a few Zoats, and Nurgle lurgy.

Another slightly later blog this week as I have been ill with the flu and, when not wondering around dazed at work, I have been asleep. I must have annoyed Nurgle somehow to feel this ill. :(

None of these factors have sadly been conducive to painting, or any other miniatures releated things.

I have however been continuing to spend my overtime money on e-bay collecting Squats and generally expanding the army of the Brighthelmstone Stronghold.  I have managed to add 5 bikes to the army, including 3 Exo-armoured Trikes with riders! In order to field an entire Warlord and Hearthguard I moved the 2 converted exo-trikes I already had, gave them spare Exo-Armoured riders I had, and now have a lovely squad of 5 Exo-Armoured Trikes.

To replace the Trikes in the other biker units, I had to get a couple more bikes, one of which is still caught up in the Xmas post at the moment. Apart from that I have bought odds and ends of Squat models, most for not a lot of money, but the odd one or two hovering around the £10 mark. In addition I have (again in the post!!) another Zoat which will complete the two Squads of 4 I have. I am looking forward to painting them finally.

As I mentioned in a previous blog post, I am buying up odds and ends of Squats for two main reasons:

Firstly, I like them. Since painting the army at the start of this year I have really grown to like the models and the background, more so than I did in the 1980's. Indeed, I was never a fan of the Bob Olley Squat models, and used to blame them for the lack of success of the race/range. Now while I still think that this is true and may have influenced other peoples attitude to Squats, after painting mine I have grown to really appreciate them. For the record, I have always liked the Iron Claw Goblins :)

Secondly, I was never 100% happy with the finished look and compostion of my Squat army. The background I created worked, and the uniform colour worked too. However, the over look seemed too drab to me, and I felt that I had got the army 'done', rather than spent the time on it and it's finer details which it deserved.
Now I have a very bad habit of tinkering with armies, be it paint schemes or organisation, and is why my Catachan army is only part finished and a mess. I do however want to go back and lightly tiniker with the Squat army. This will involve re-basing them, painting up the new miniatures I have bought, lighting the uniform colour, adding a little more details and adding some green (what was Woodland Green) to the armour/helmets similar to the Mole Mortar crew shown later.

I want the Squats to be an on and off project. I'll paint a few as a break from other projects, rather than be an all encompassing thing. However as many people have found, the Squats can be a compulsive project.
Perversely, given the Squats fate in 40K, I have been really tempted to start collecting a new 40k edition Tyranid army! The models look very nice, and would be fun to paint, but it might be something for later next year. 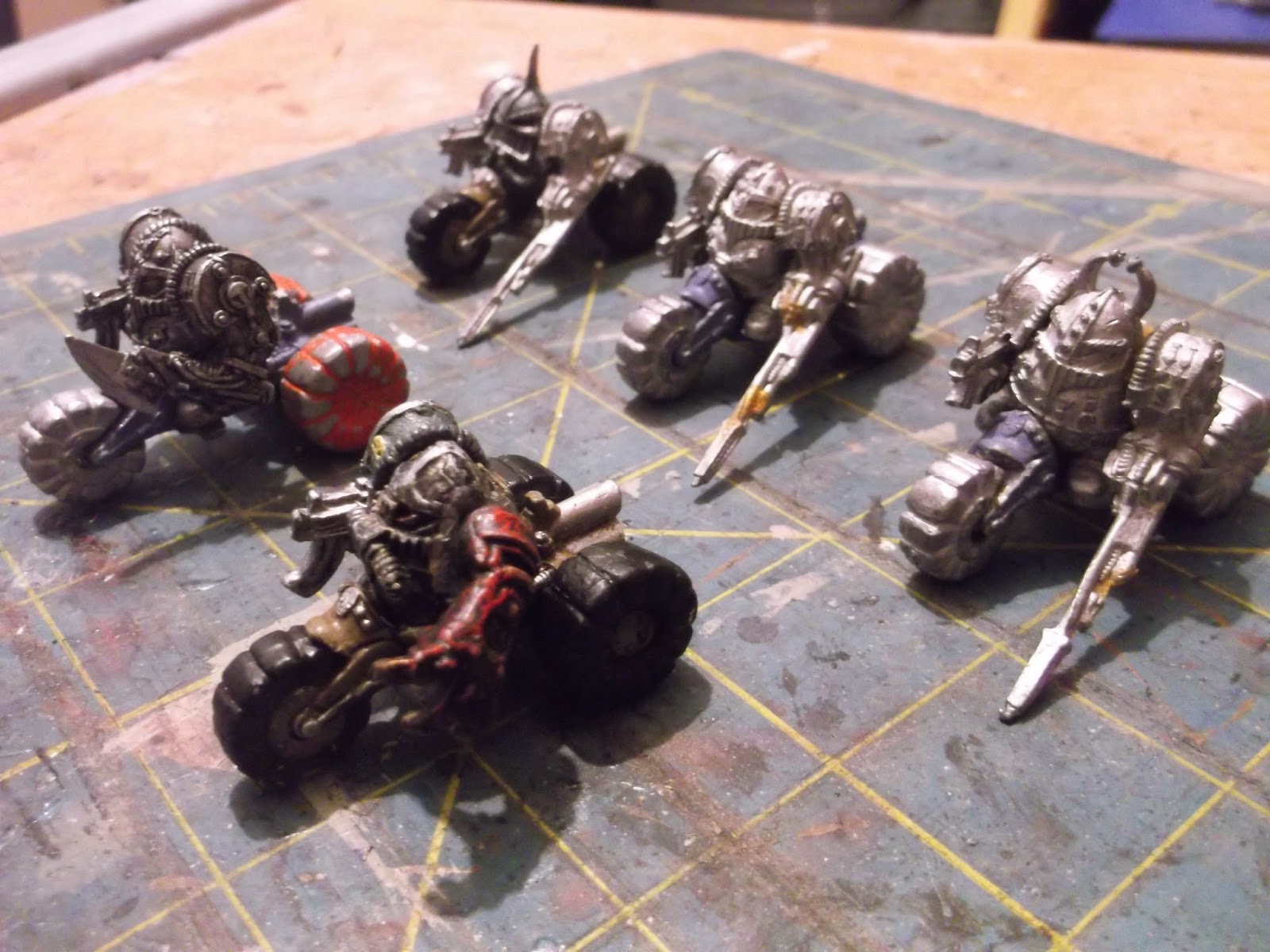 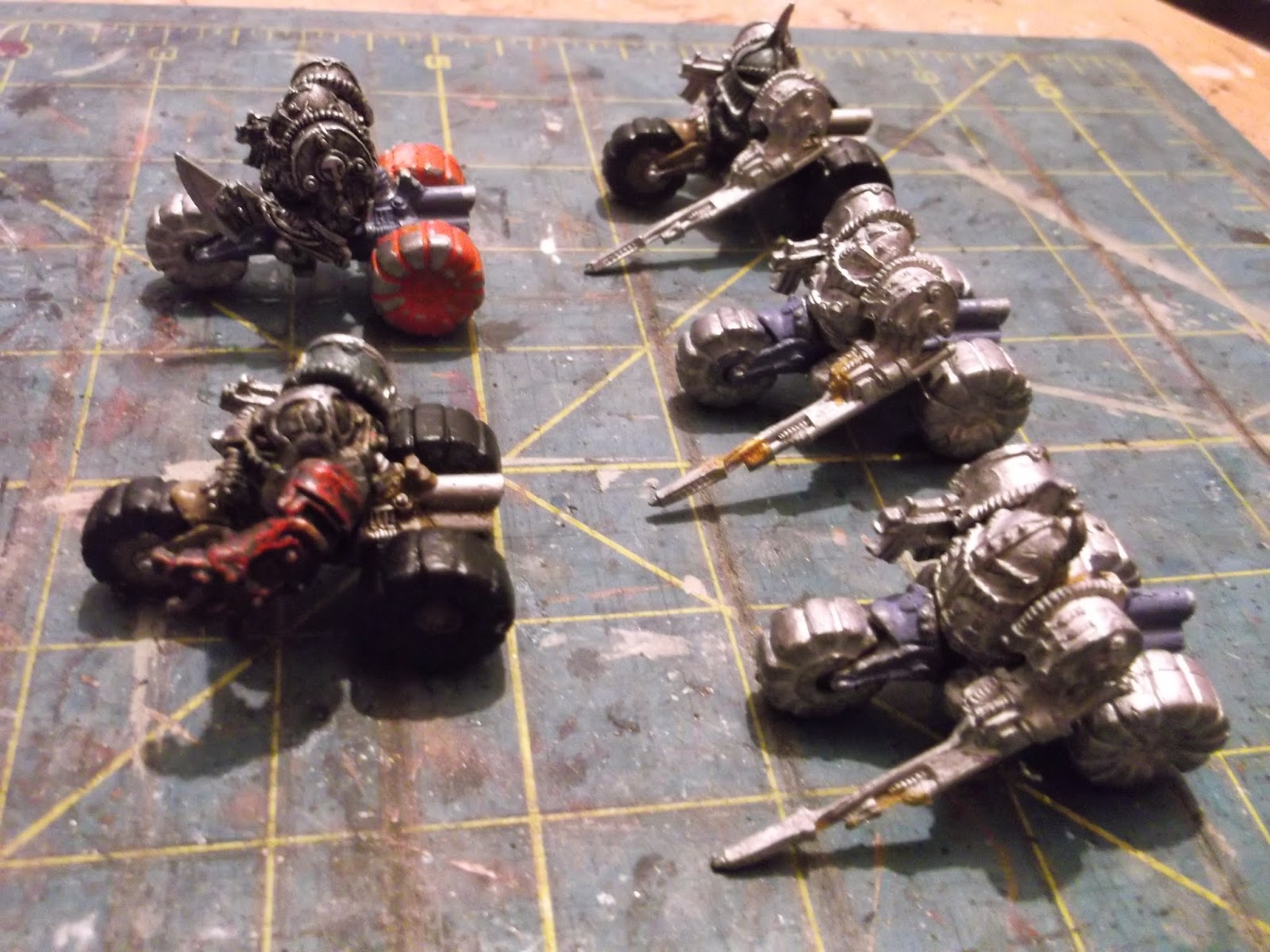 Side view.
They are not glued together which is why the arms don't look right yet. 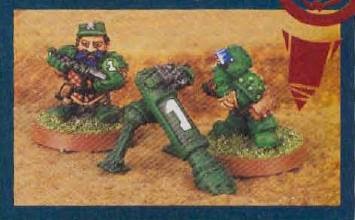 Squat Mole Mortar, circa 1988.
I want to combine some elements of this uniform with my current paint scheme. 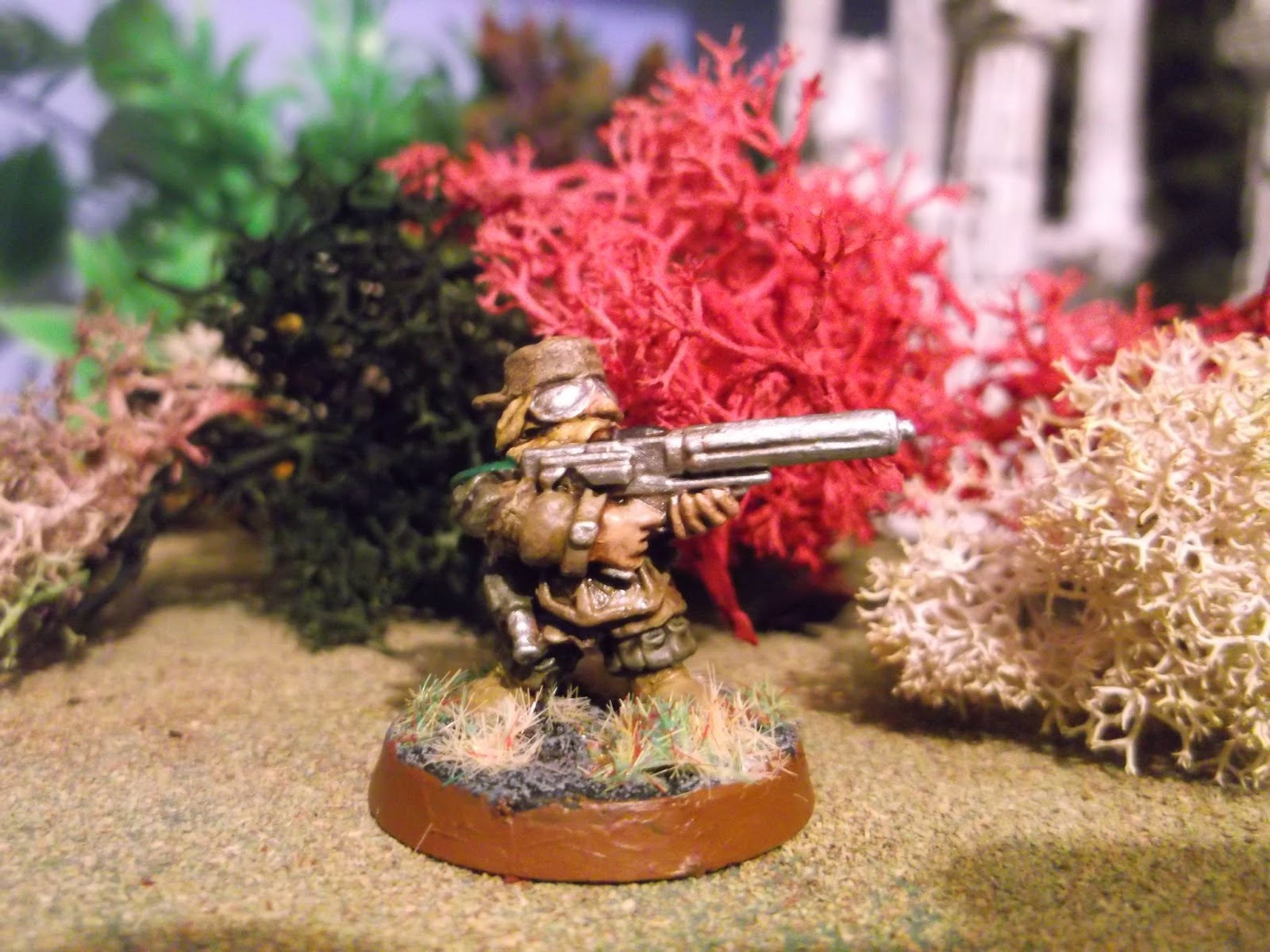 Test model, re-based, slightly lightened uniform, and with some 'Woodland Green' (now aka 'Warpstone Glow').
The base design is similar to the Skaven bases for my 3rd Edition Skaven army. I wanted to lighten the model and make them look slighly more 'Rogue Trader'. 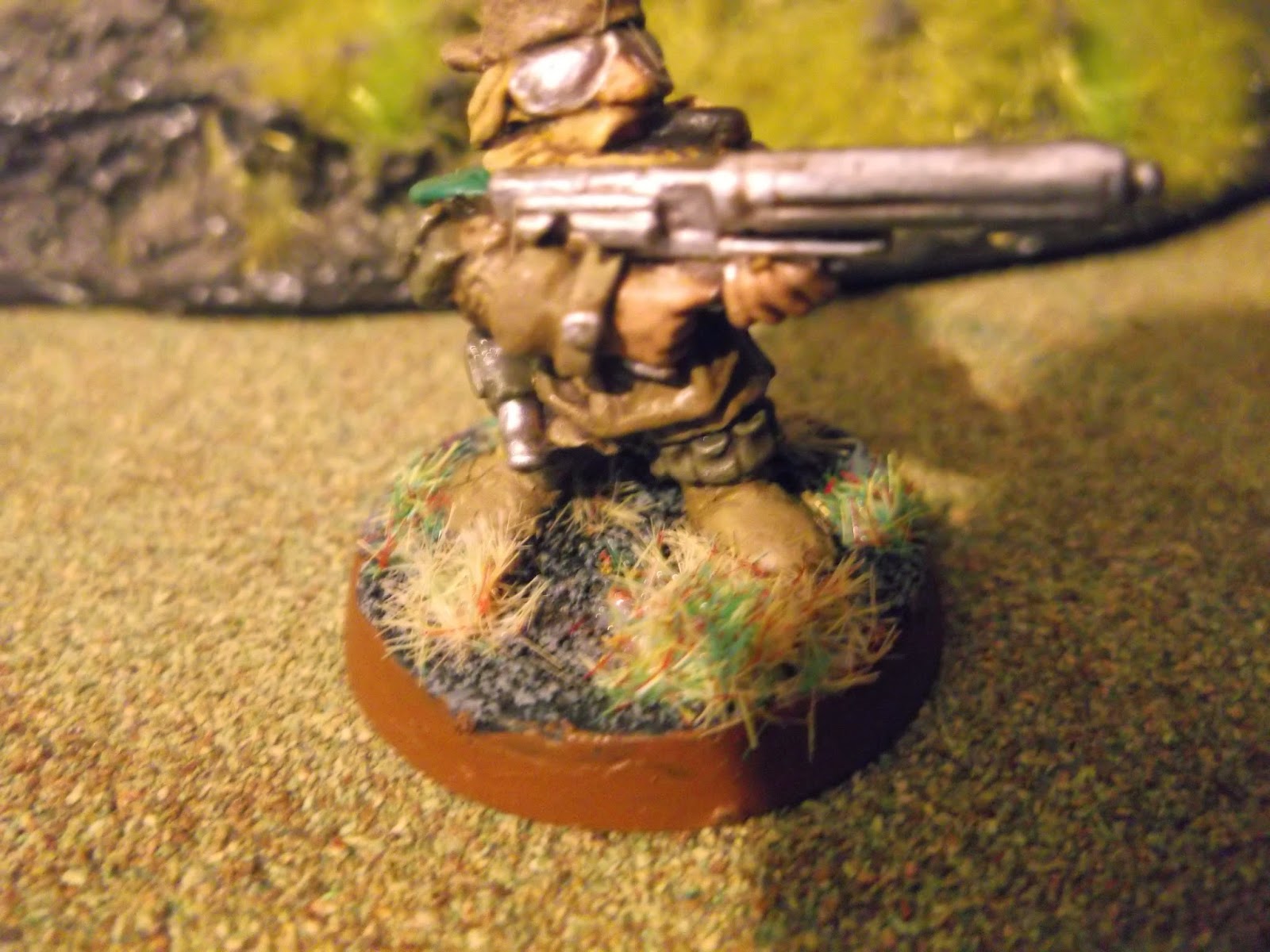 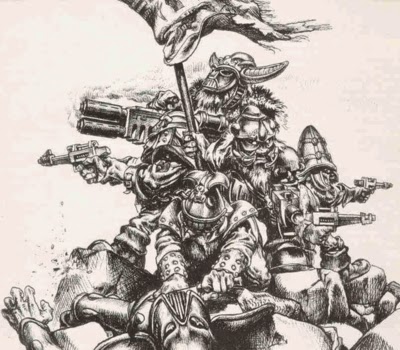 Warlord and Hearthguard artwork.
I always loved this picture, and so when I bought a spare Warlord model he had to have a Multi-Melta. Incedently I rolled on the Squat Heavy Weapons chart and actually rolled up a Multi Melta!
(I might need a legal bit, so the picture belongs to GW, or the artist, or someone, but not me. I only posted for educational purposes to compare with the miniature below). 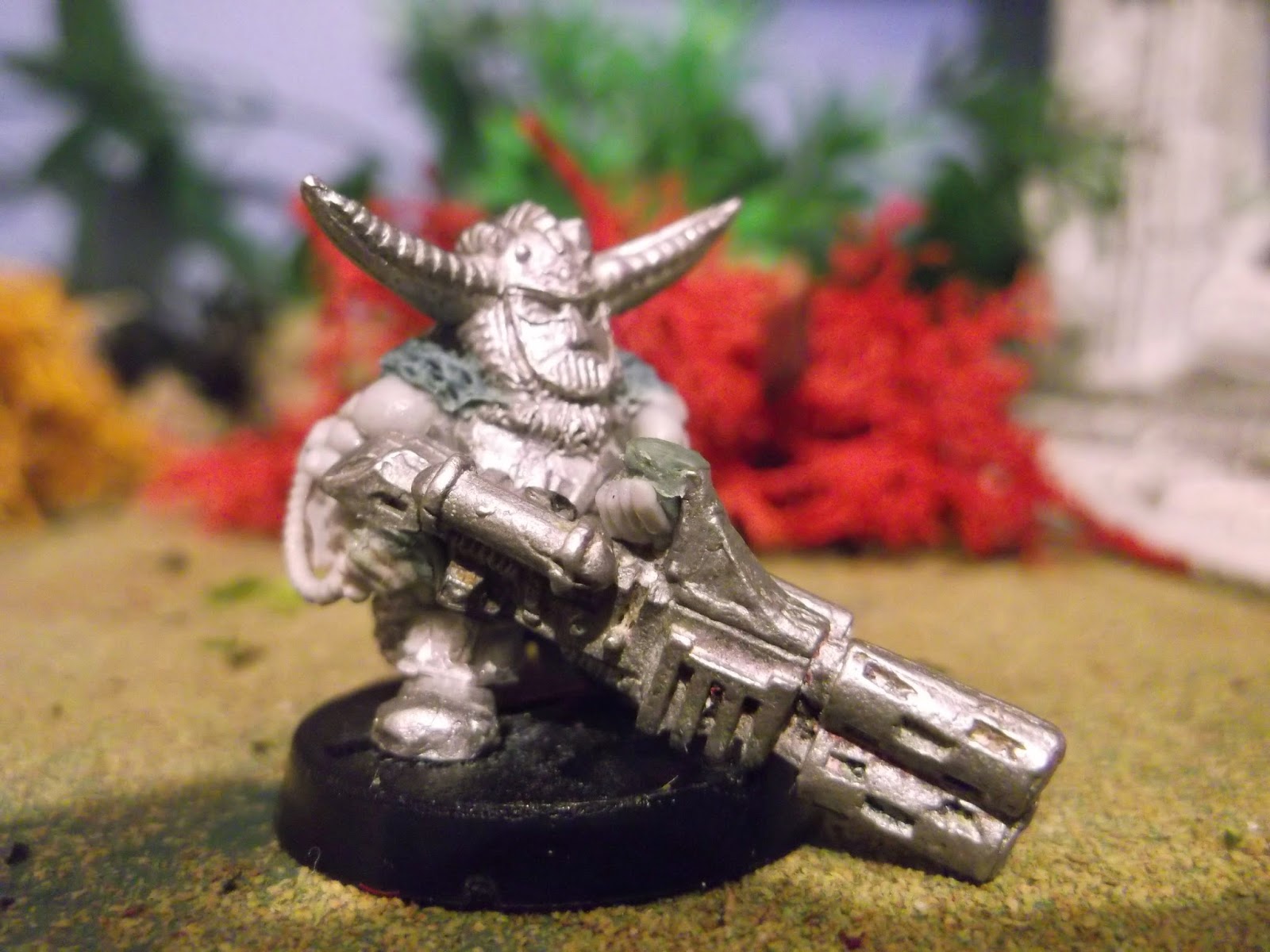 The converted Squat Warlord with a Chaos Renegade Multi-Melta and Eldar Armoured arms. 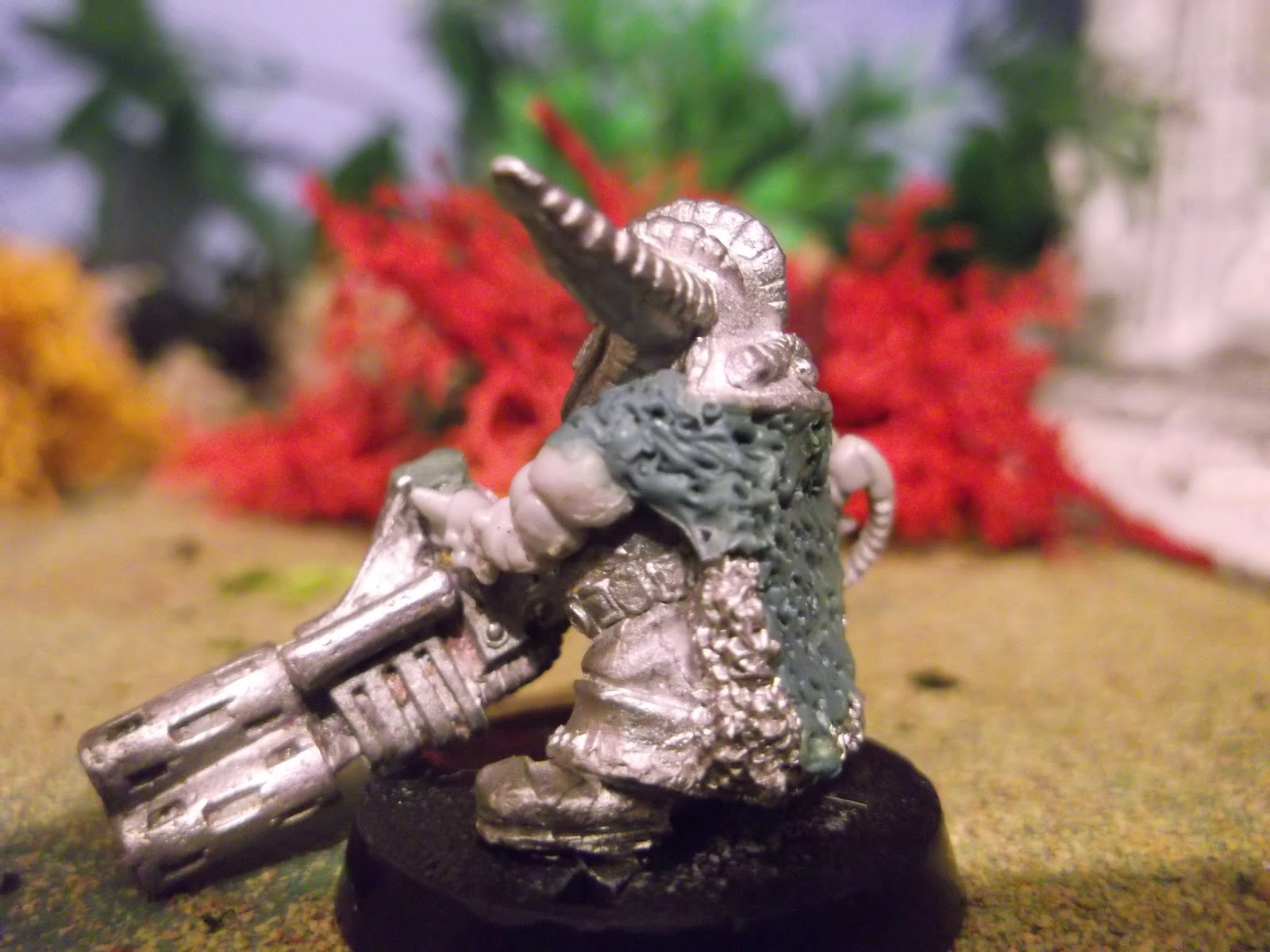 Rear view.
I green stuffed the cloak to make it look more furry. I might add more later. 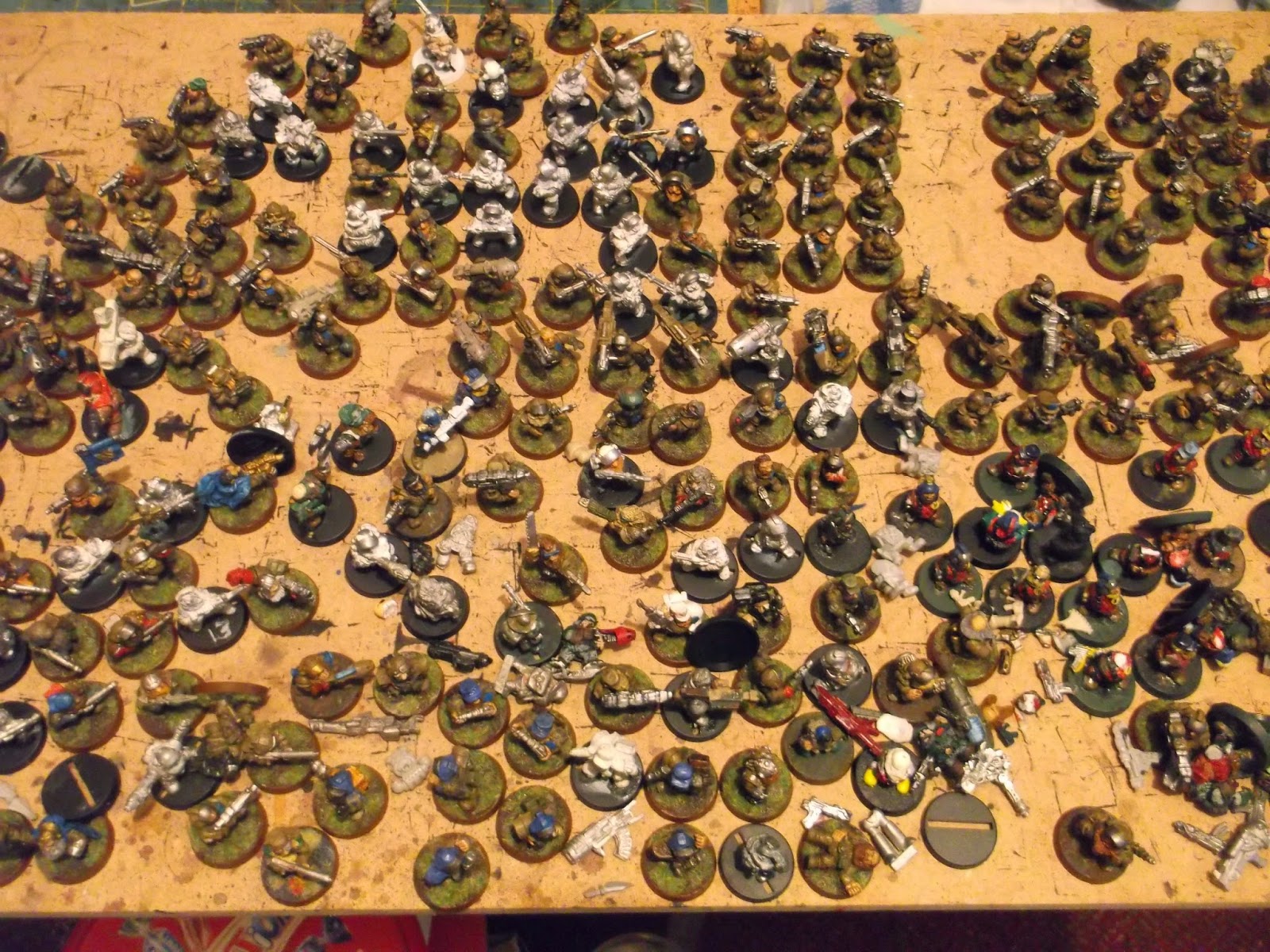 Squats on the workbench.
I have lots of Squats to sort out! 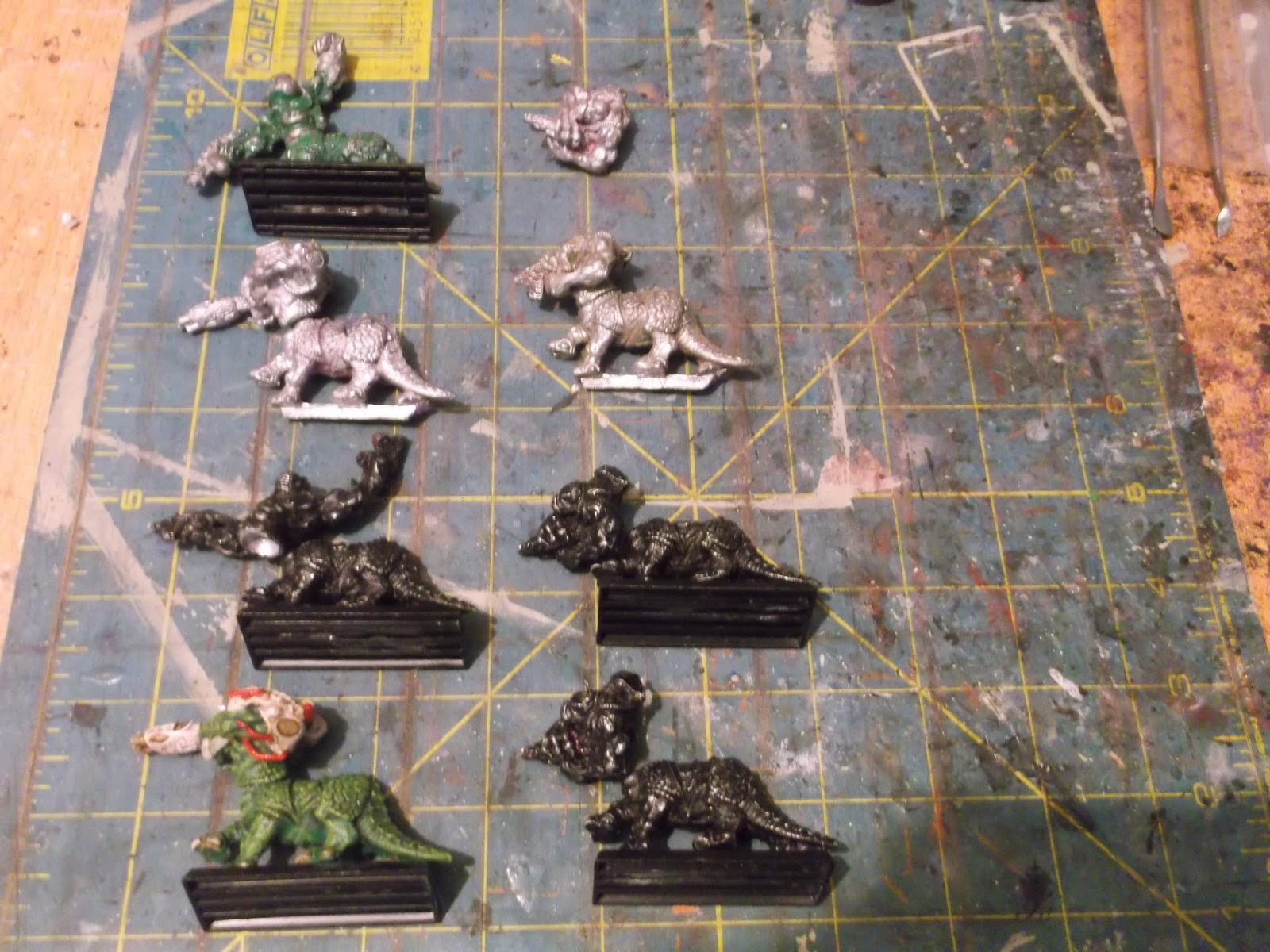 Zoats.
I have 7 Zoats, and one spare torso. I do have a fantasy Zoat in the post so I can use its legs. 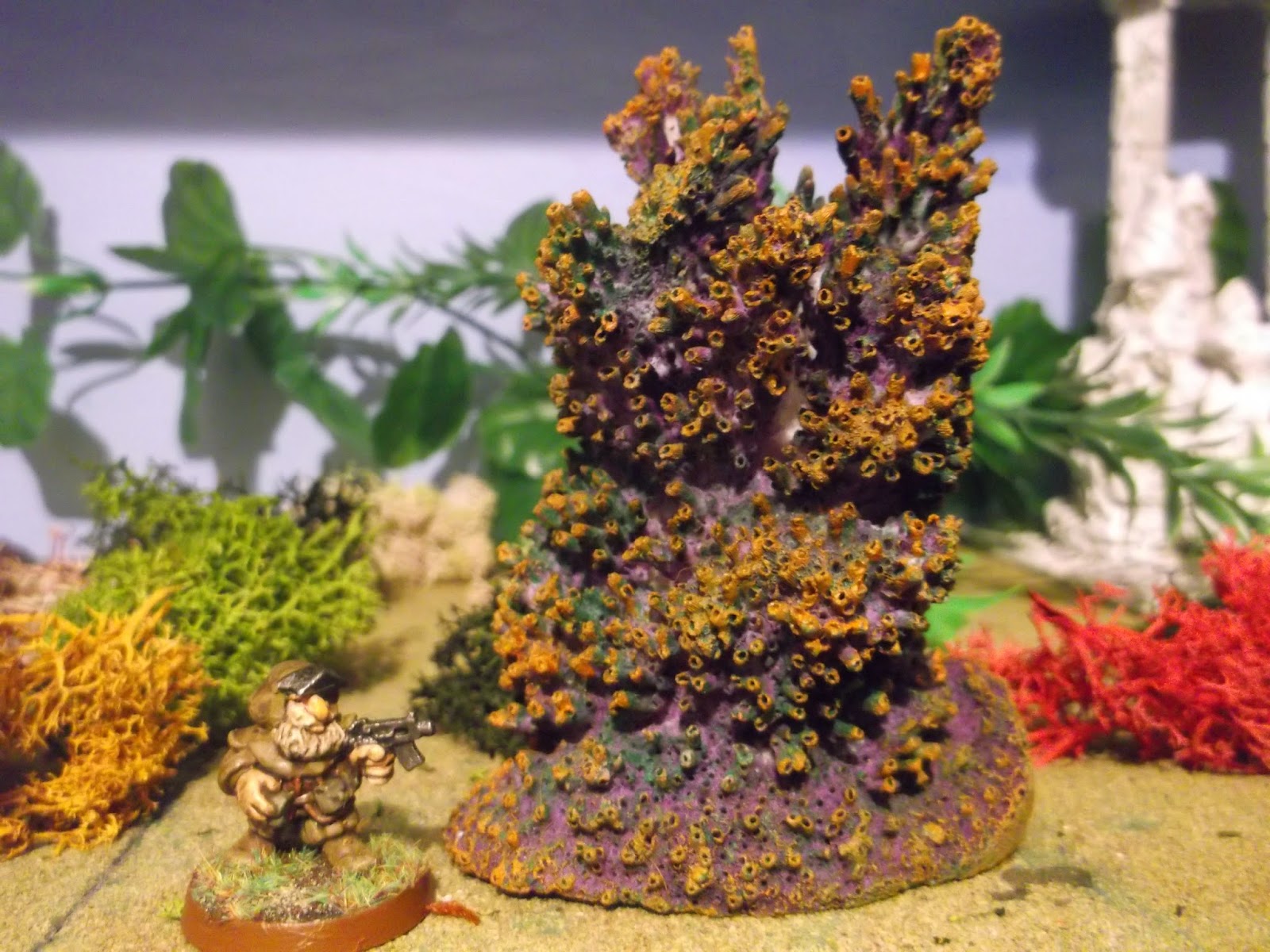 Something odd I found.
I had an old piece of white coral (I think it was a cast of some coral), so I painted it up the other night as a crazy looking alien plant. Painted purple, highlighted it green, and the orange.
It was just something random. :)

Hopefully I will be lurgy free by next week, and will have settled on a new project, or at least painted something.
Posted by Goblin Lee at 23:12