I've had a great start to 2015, as of today my blog has now reached 60,066 views. So again, a big thank you to everyone who has taken an interest in my blog and miniatures.

Secondly, after engaging in conversations on the Oldhammer Facebook group, and chatting with Andy Hoare about his current Space Slann project, which is located here:

...it has inspired me to tackle my own Space Slann.

It is a project I have been meaning to do ever since I managed to buy the final Space Slann I required for the complete set last year.

My Space Slann force consists of 27 Slann, formed into five squats of five, and with two independent Warleaders. I have always loved the Space Slann, both as a concept, and as a miniatures range, and have been wanting to paint them. Like my fantasy Slann army I have chosen to paint them in bright colours and to vary the skin tones, but have tried to keep the majority green skinned, although not to such a great degree as the fantasy army.

Since starting the project on the 2nd January I have managed to paint up 21 Space Slann! I still need to varnish and base them, and will base them the same as my fantasy Slann.
Once I have painted them all I will do a proper update with them all in squads, and going into the Space Slann range and background in more detail.
Enjoy :) 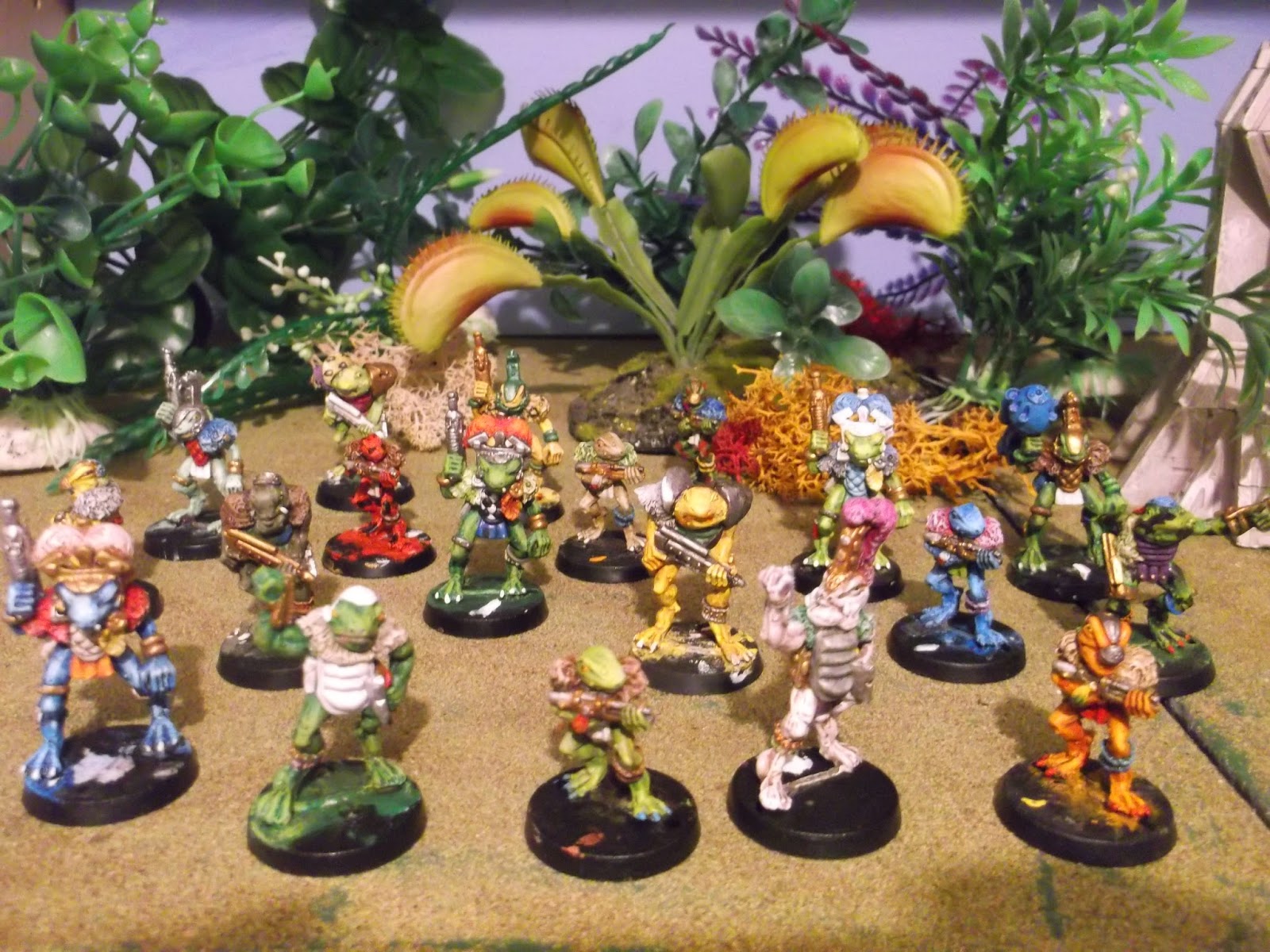 21 Space Slann in the jungle. 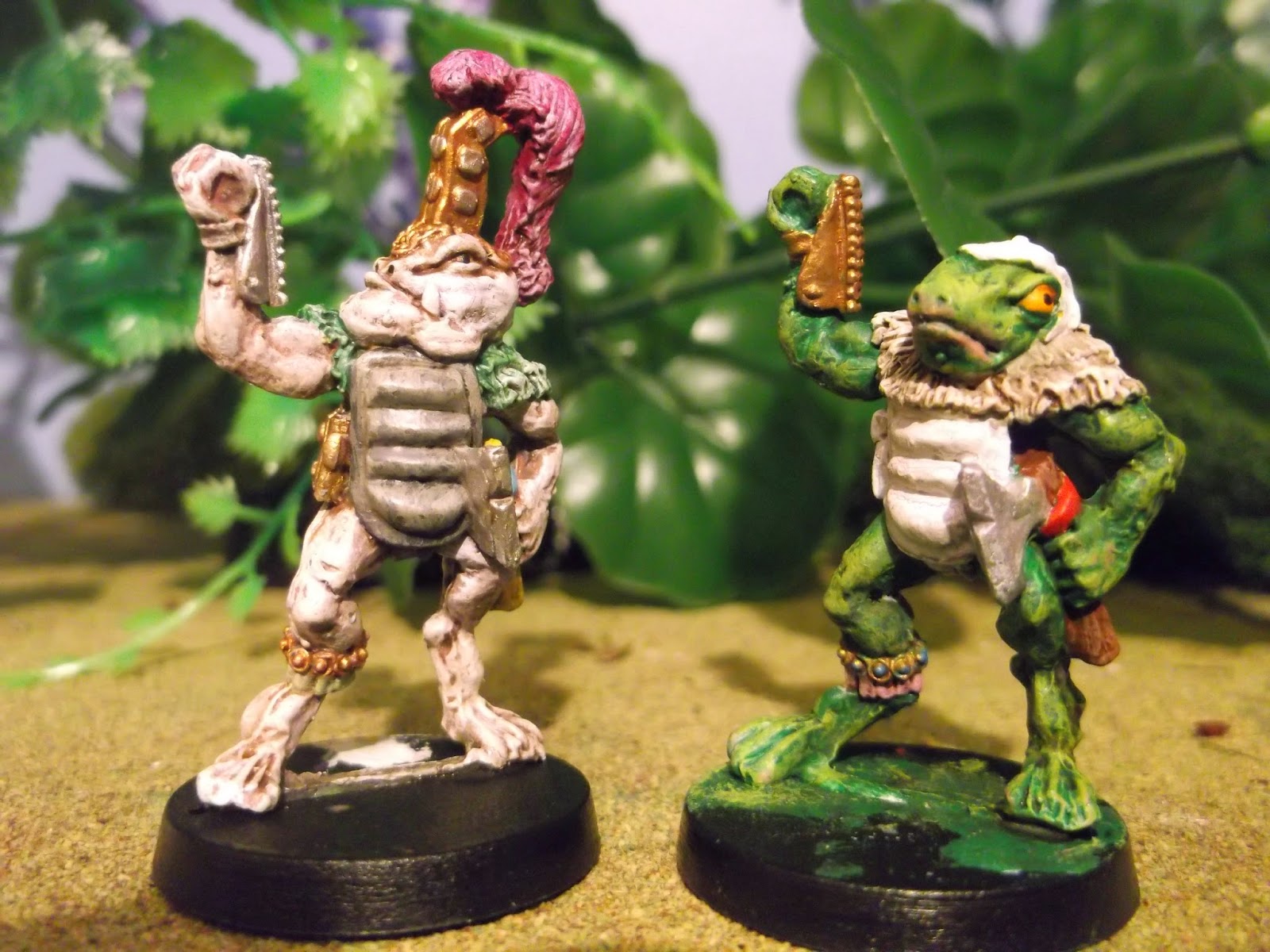 On the left, Quinletz, the Warbands Commander.
I have painted him up as an albino Slann as the background suggests that brightly coloured or albino Slann can be extrovert, talented, or noteworthy in some way.
On the right is his second in command, Huvez. 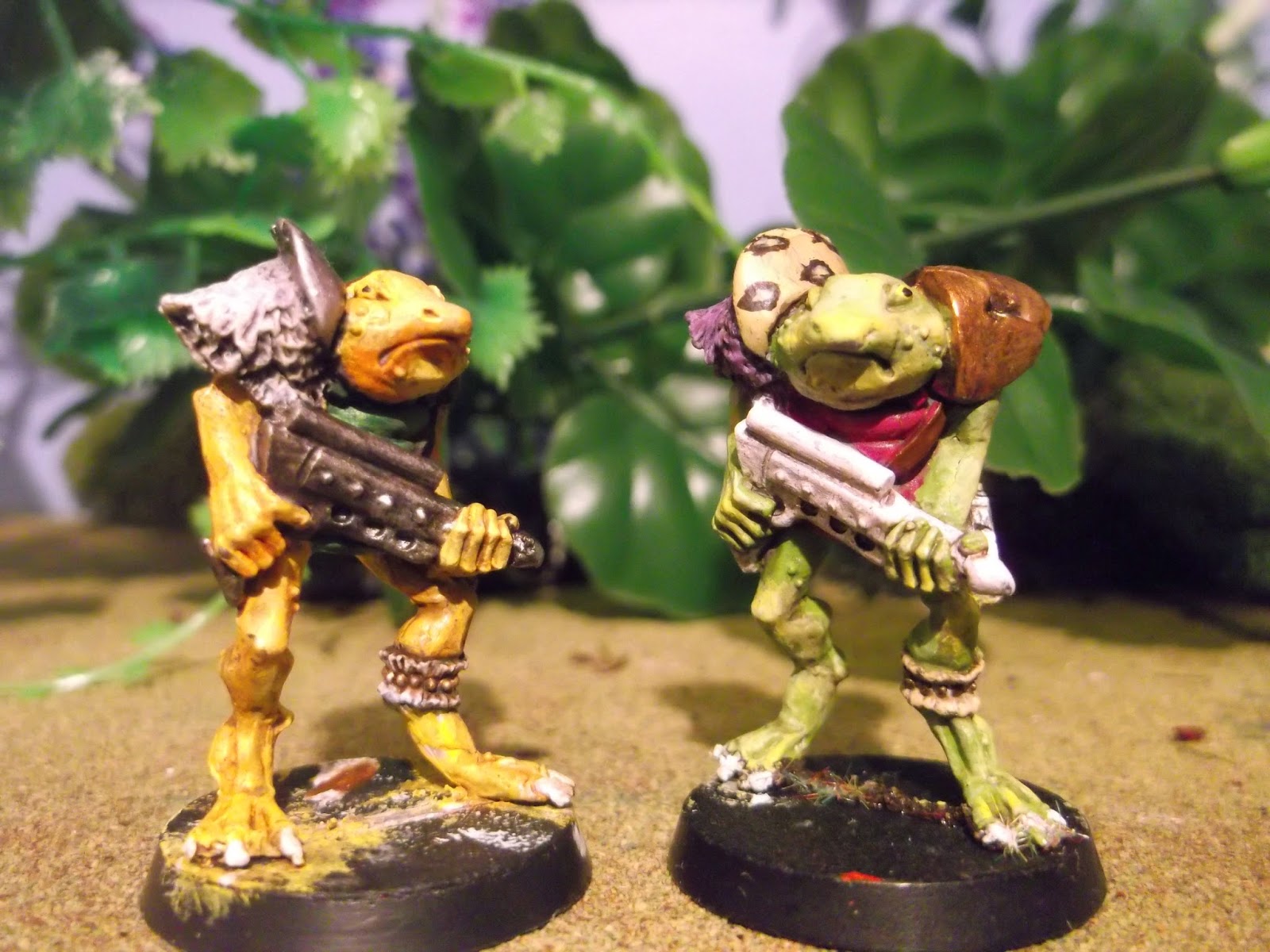 Two Sschoi.
I have painted the one on the left similar to the Slann on page 12 of the Rogue Trader rulebook. 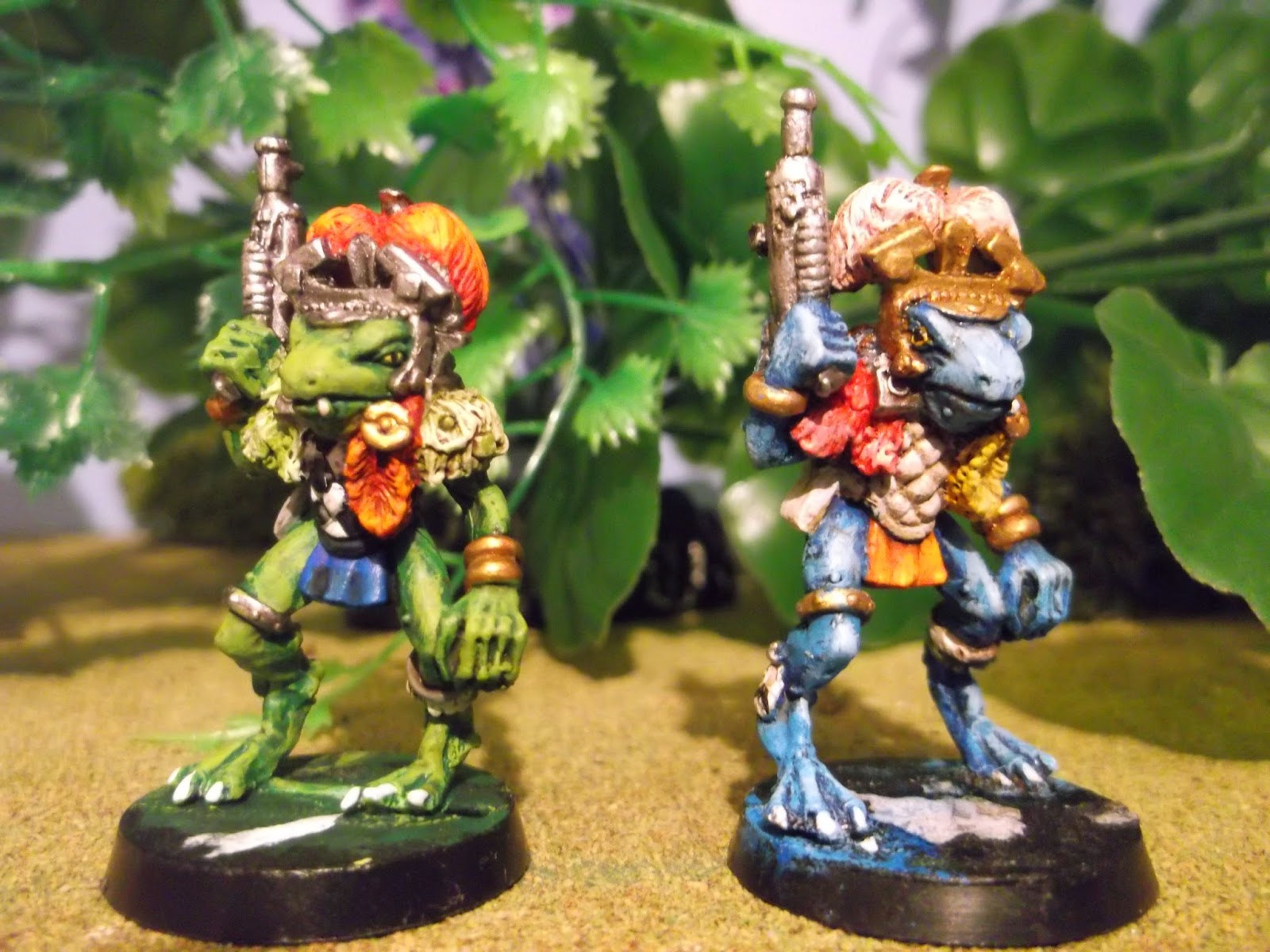 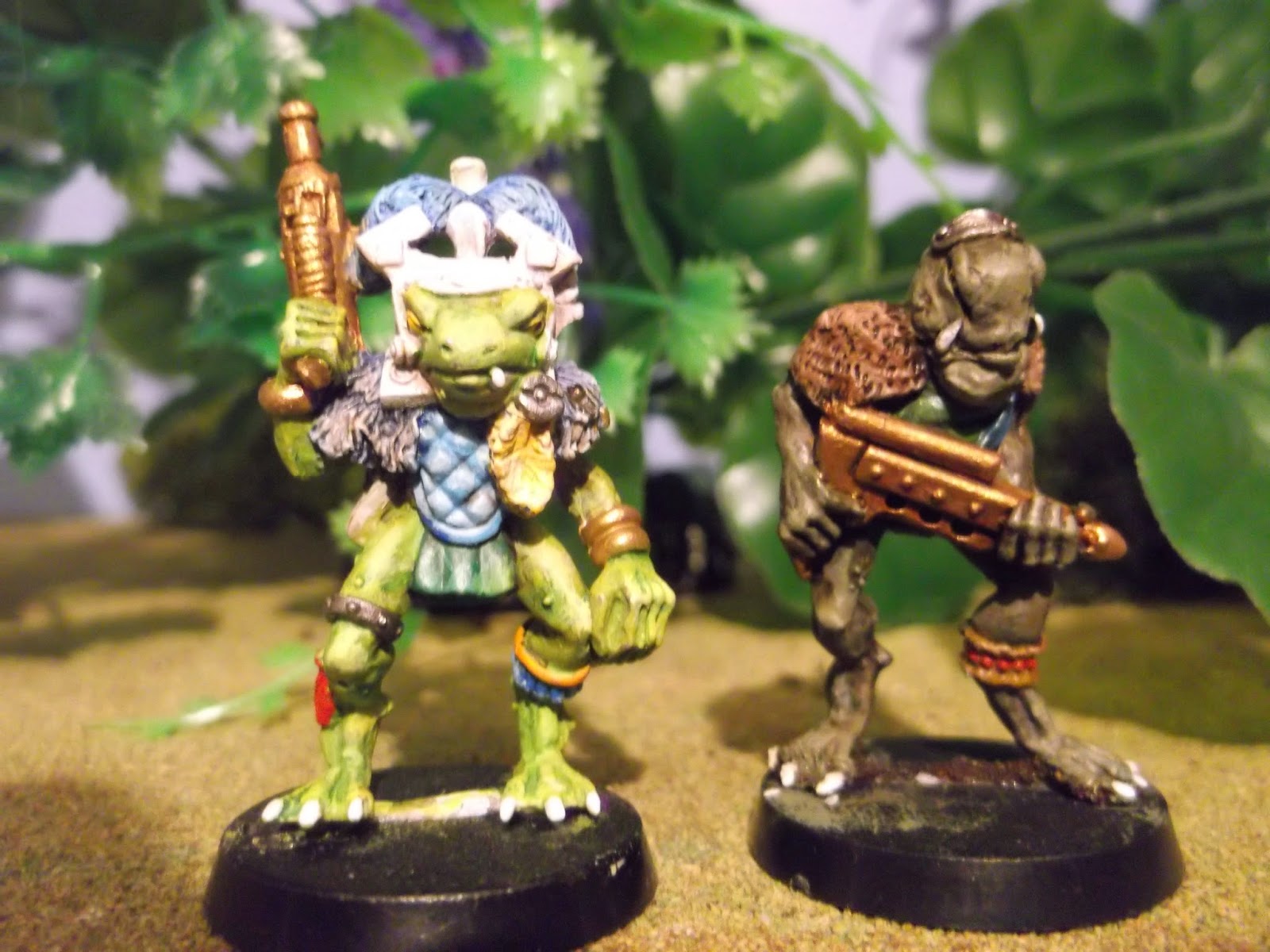 Another CMMR. Xix, and Llamas.
I am not sure if Llamas's gun is a Las-gun or a Graviton Gun, or maybe even a Needler? 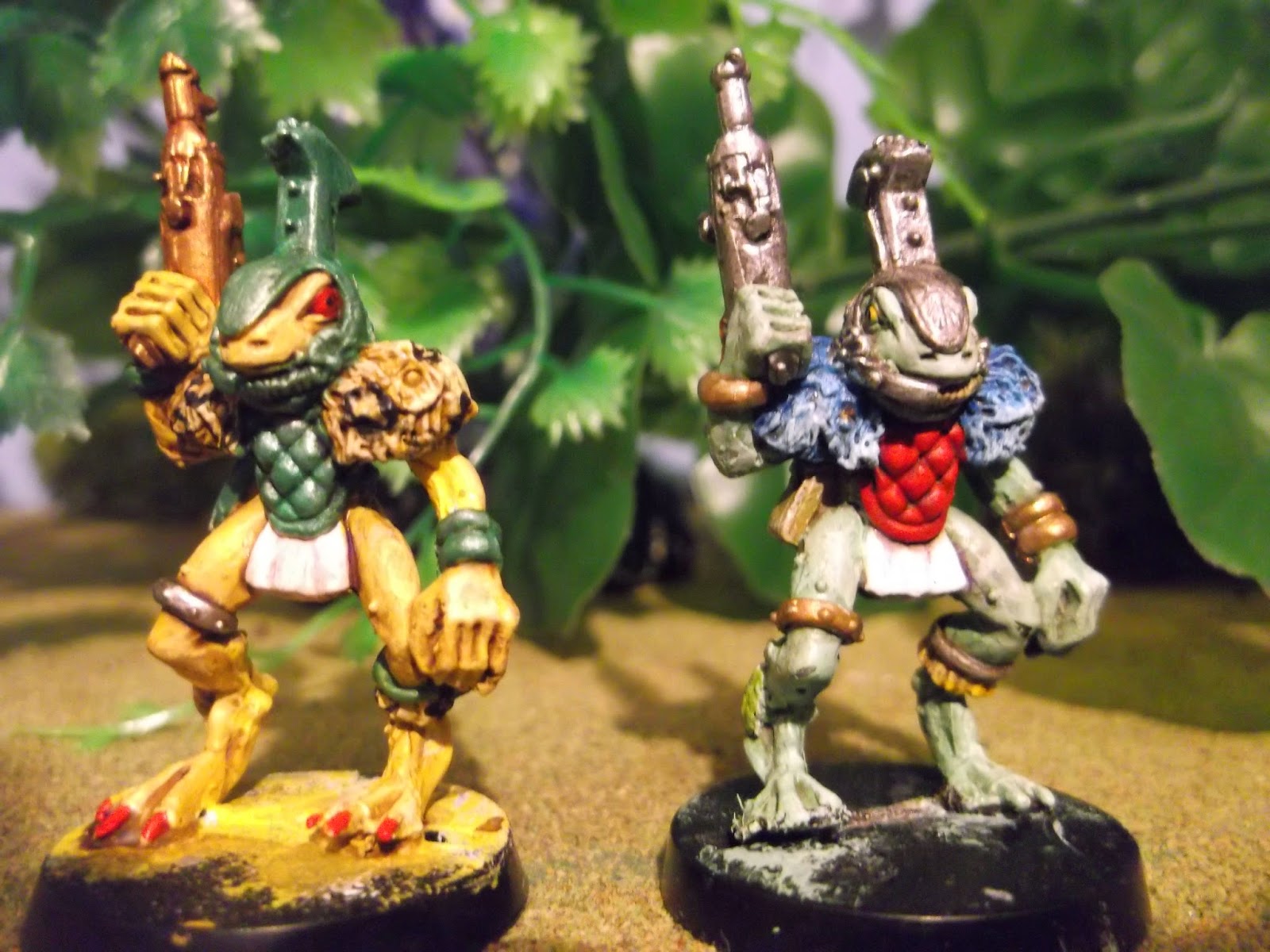 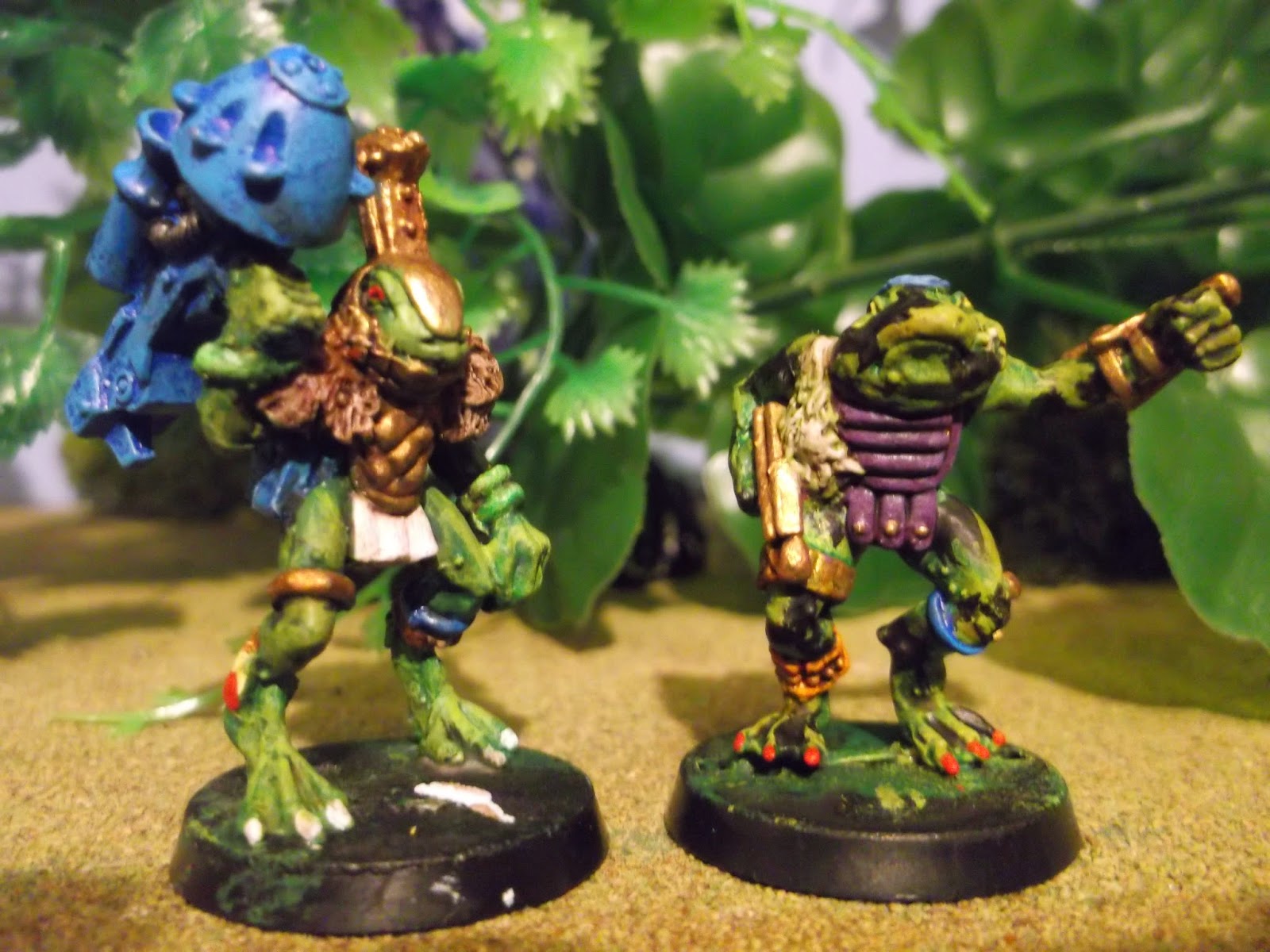 Another Holx, converted up to carry a Conversion Beamer. I had orginally converted this model up (yes, I chopped up a Space Slann!) to act as an army general for my fantasy Slann army, but I decided to go for Gurggl Greenwake instead. So I thought a Conversion Beamer might look good for him, and add some firepower to the Warband.
On the right is Xvarn, who will act as a squad leader. 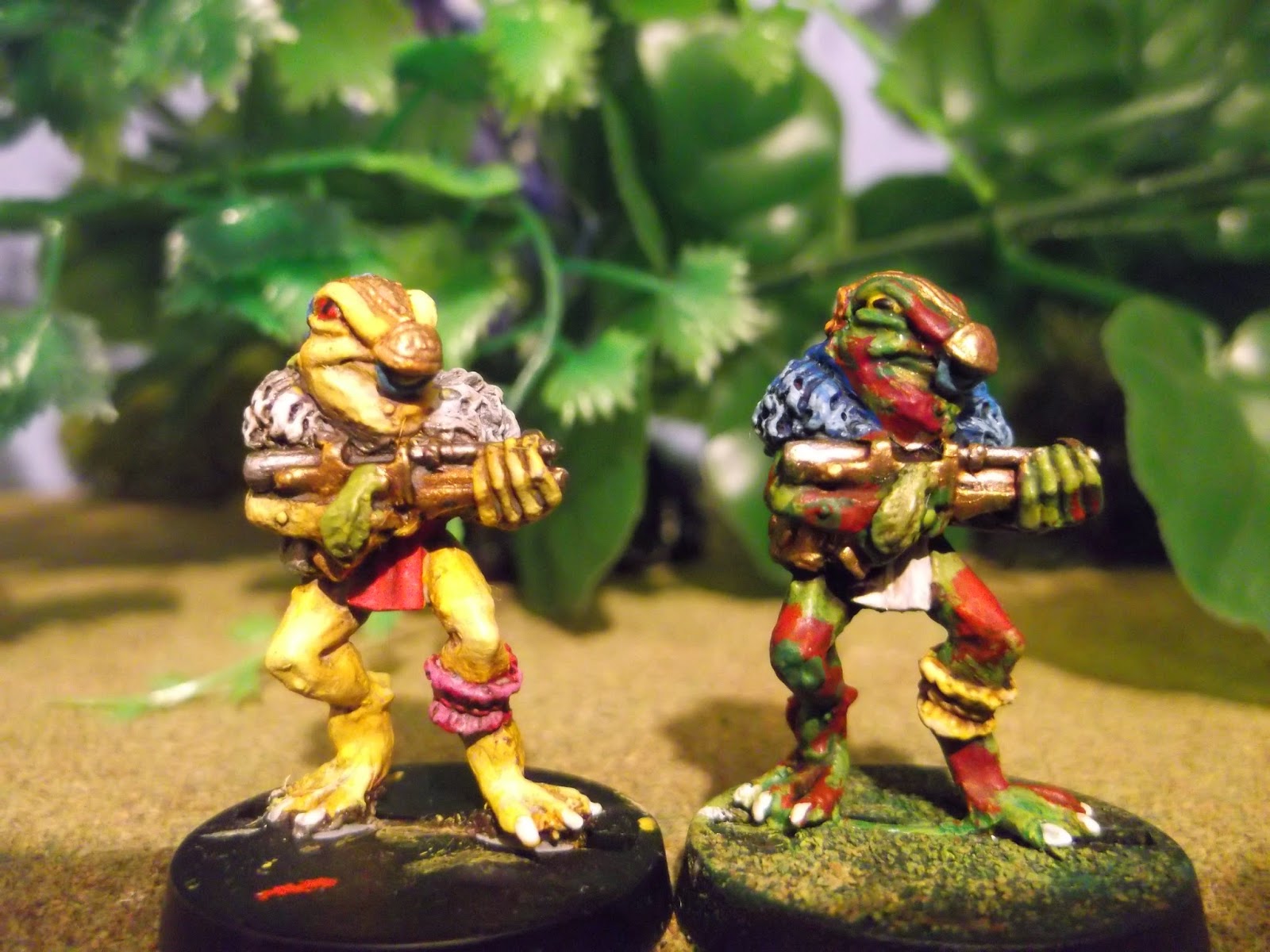 Two Scoitz's.
I painted the one on the right the same as one of my fantasy army's Scout units. 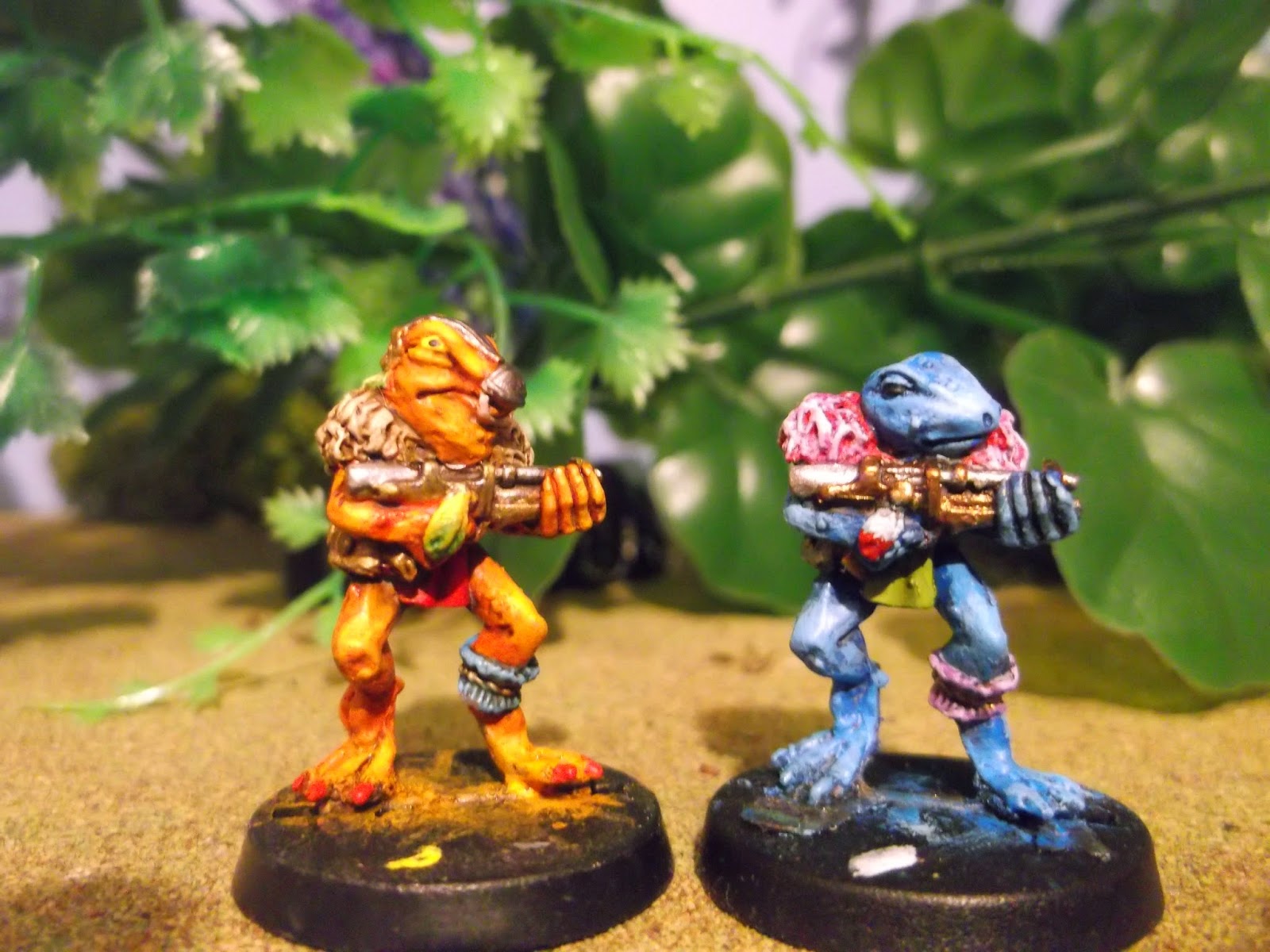 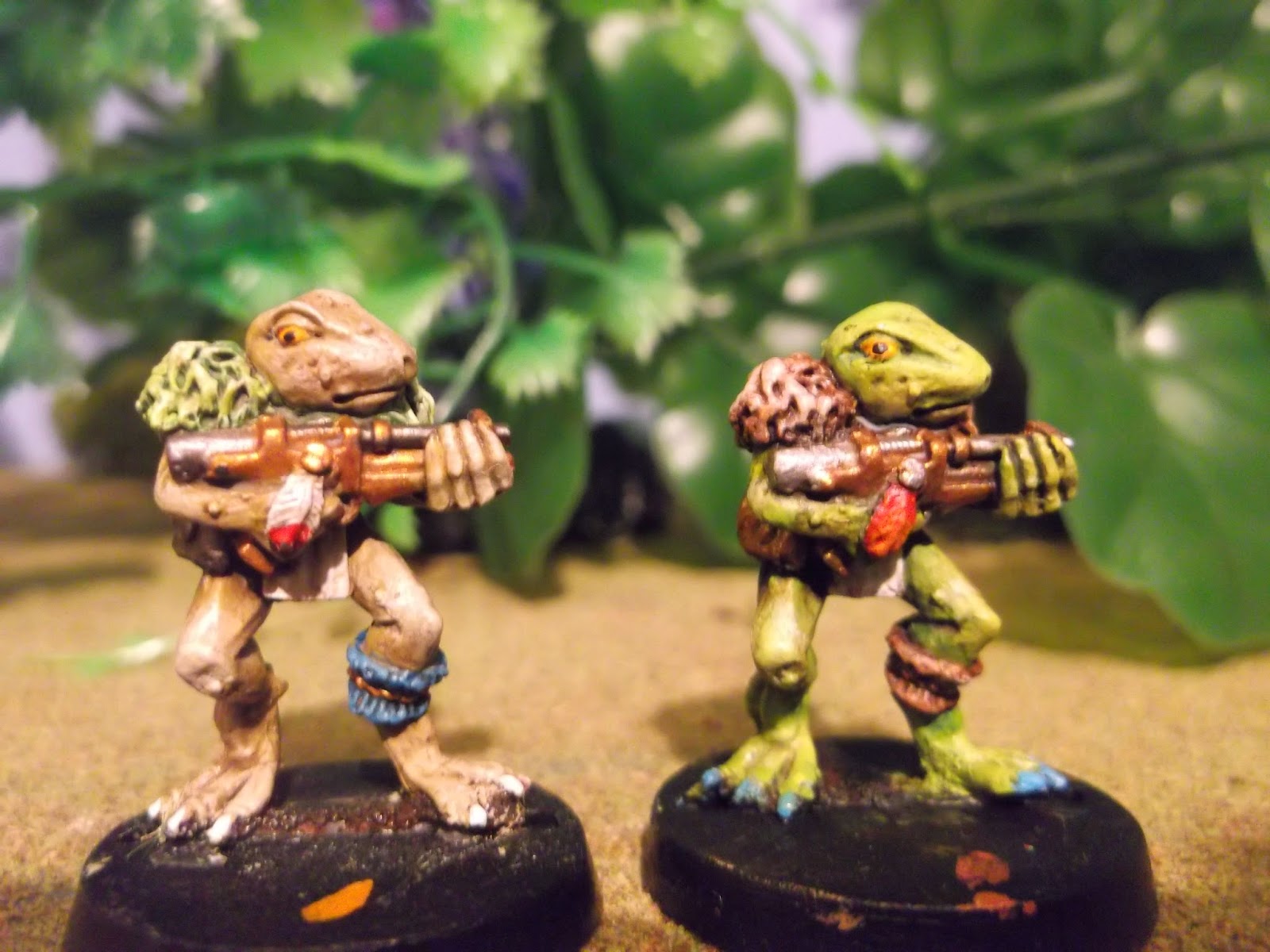 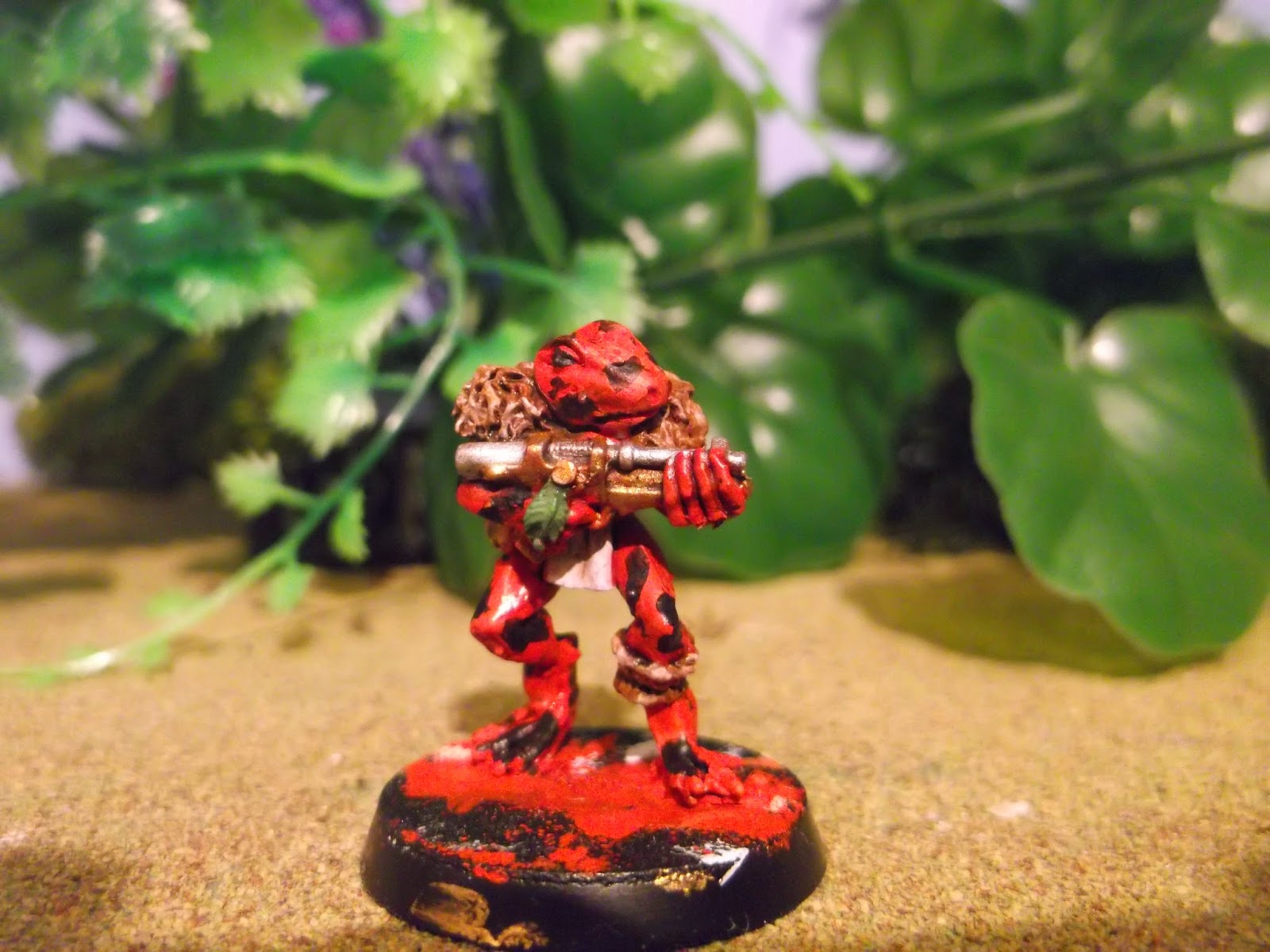 Final Olassa.
I have painted him up similar to the Strawberry Posion Dart Frog, which I also used as a basis for another pair of fantasy army's Slann units. 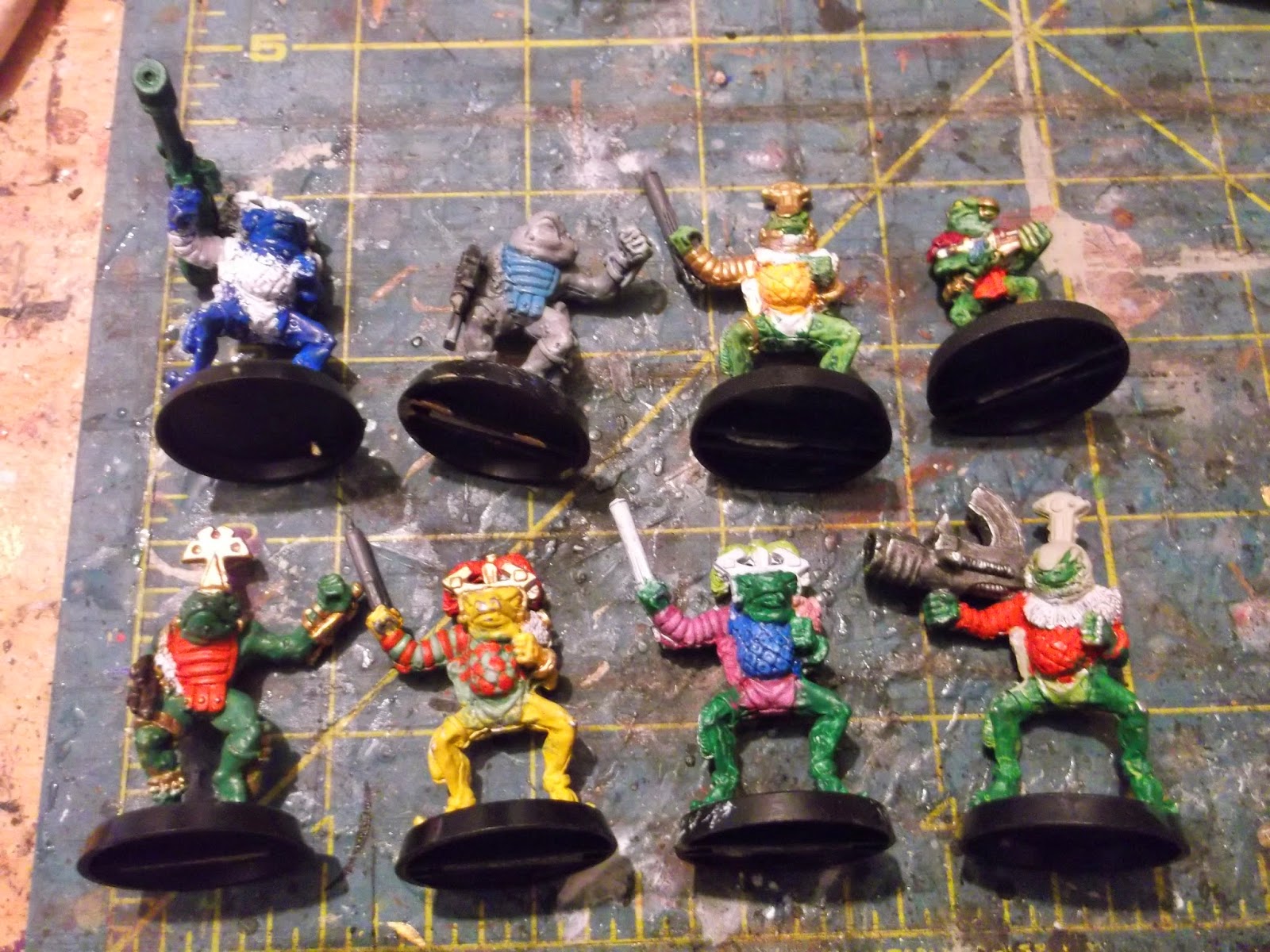 The painting table, only eight left to paint. :)

Next blog update will be the finished Space Slann. I have a lot more time free now that Xmas is over, so I can get busy painting :)
Posted by Goblin Lee at 10:45