A Death Guard 'glitch'; The Sons of Horus; and a few World Eaters 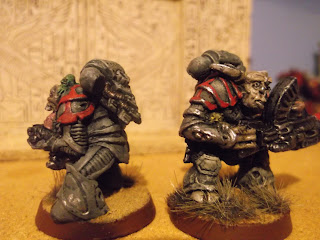 Look, it's rubbing off!!
(the red was Vallejo too, but I caught that with my nail as I rubbed off the grey green).

Now I had never had a problem like this before, and it seems to be down the the Vallejo Grey Green paint, as the Citadel colours I had used were fine. I can only put this down to a rogue batch of the paint as I have not had an issue with Vallejo before. I chatted to people on the 'Oldhammer' Facebook group and they seemed to agree. Needless to say I am not impressed and a little reluctant to keep using Vallejo paints. Also it means I have a Renegade army which requires repainting.

Originally I had painted the Death Guard in a slightly grubby version of their white and red armour from the pre Heresy Rogue Trader colour scheme. However, in keeping with my 1991 look approach I have decided that if I need to repaint them, I might as well do it in the colours of the time. So I have opted for the classic green and red of 'Lost and the Damned' and White Dwarf fame.

In happier news I have been shopping.
I been shopping on e-bay, buying a lot of Renegades with the aim of taking this vast Tratior Legions project one step further by adding some Sons of Horus, based on the Black Legion list in Slaves to Darkness. I have a force from each of the four Chaos Powers, but always felt that the most important force, that of Horus himself, should be present.

So to add both to this idea, and to fill gaps in the other Legions, I have purchased another 51 Renegades (actually 53, I bought another two this evening!), and in addtion I have added Terminators and Robots as well, but more on them next update. Needless to say that this has'nt been cheap, but I have also been lucky in a few auctions, but the total bill is around £270-ish. I'll do a proper update on the gathering Sons of Horus as a later date.

In addtion to repainting the Death Guard, and the test miniatures of the Sons of Horus, I have only been about to paint a few World Eaters. This is mainly due to the upcoming horror at work that is Christmas, and my sorting out of miniatures for the now five Legions. I have however still painted a few Renegades.
Enjoy :) 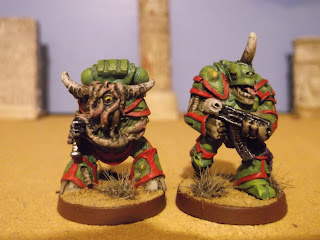 Death Guard reboot:
Two test model Renegades in the new, non rub-off paint scheme.
I have based these on the classic look from the 1980's. The armour is the shade of the old Goblin Green paint, and highlighted with that and some added yellow. I have painted the armour edges in Blood Red, and given everything a nice dark wash.
Personally I think that the glitch might be a blessing in disguise as I prefer the classic Nurgle look, and it seems to fit my idea of Death Guard Renegades. 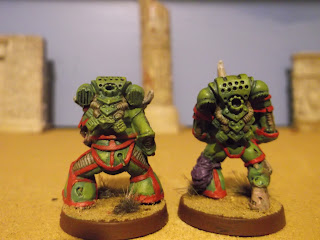 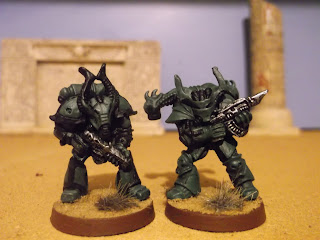 Sons of Horus test models.
At the time of Rogue Trader I wondered about the pre Black Legion armour colour. The epic Space Marine box suggested they were black, which was no help as they were meant to have painted the armour black later. A White Dwarf article at the time also suggested that the tanks were black, which while possible, did'nt help on the Marines armour colour.
At the time I recall discussions suggesting that the armour colour was either grey/off white, an idea derived from a lunar grey from the Lunar Wolves idea; or green from photos of painted renegades. The green was much later picked up by GW and is now the Sons of Horus colour. Now I did'nt want to paint them with 21st Century background fluff, but from the background of the 1980's. However without any firm evidence to work from, I chose the green for variety and that it looked good.
I painted them from a black undercoat with Vallejo German Uniform Green, then with a higlight of that mixed with Citadel Warpstome glow. The whole thing was then given a thin black paint wash. 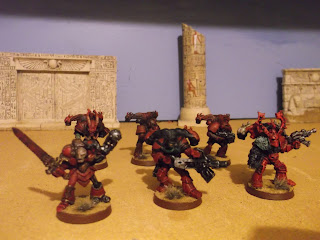 World Eaters!
I have only managed to paint a few in the last week or so. 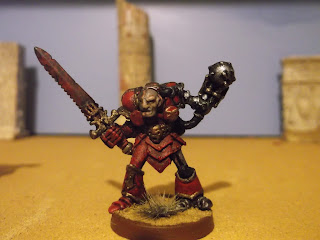 Warhammer Chaos Champion of Chaos, painted up for the World Eaters and to be used as a (non psychic power using) Libarian. 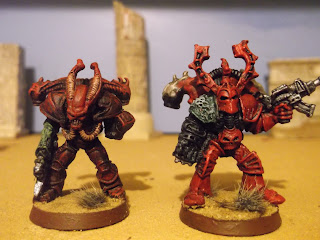 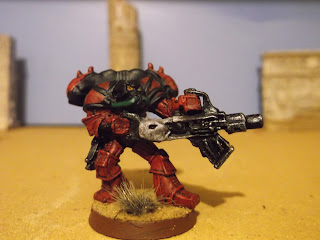 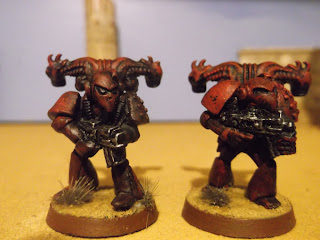 Two more World Eaters.
I have added a few normal Marines in amongst the Renegades to add a little variety, and to add some more number tothe Legions. I have added about 20 Marines to the five Legions, so they are not common. Adding the Chaos backpack I think gives them that more Tratior feel.


Next update will hopefully be on a few more World Eaters, and maybe some more Death Guard. Also there will be more on my e-bay shopping.
Posted by Goblin Lee at 22:12