I've had quite a productive week of painting. I managing to paint another World Eater Tactical Squad, a Predator, and two World Eater Officers mounted on Juggernaughts.

The Tactical squad was very quick and easy to paint and in the style of the others I have painted. In a similar vein I painted a Predator for the World Eaters, but with a little difference. I wanted to break up the solid red block look of the tank, and so graduated the red from an orange highlighted red at the fore, to the drybrushed black-red at the rear. Also, as the model had lost is turret mounted Auto-Cannon, I replaced it with a cut down plastic Chaos Auto-Cannon.

Finally I have painted two of the five World Eater officers mounted on Juggernaughts. In the Slaves to Darkness World Eater army list, any officers may be mounted on the demonic Juggernaught for 75 points. I always liked the 'Juggers' and over time ended up with five of them. The first two riders I have painted are more fantasy in design than the others, but I consider that in the 40k setting to be more that they are wearing a form of mutated power armour and/or Chaos armour. 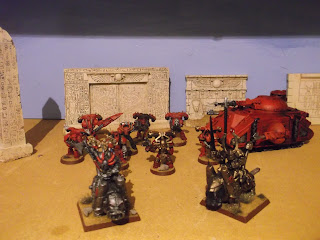 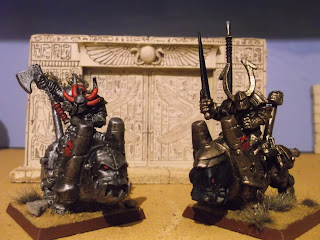 World Eater officers on Juggernaughts.
For these two I wanted to go for a look which suggested an almost fusion of man and demon, and so painted them in the same colours. For the others still on my painting table I have gone for a more seperate loo bewtween rider and mount.
I have not allocated the rank/position of the officers yet, but will consider which of them seems more of a Libarian, Captain, etc. 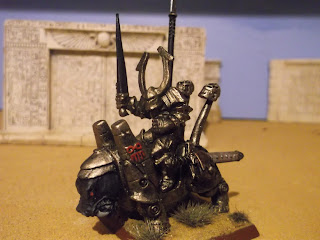 I painted this officer gold/brass. I wanted at least one of the officers to have the solid look of brass reminiscent of one of the colours of Khorne. 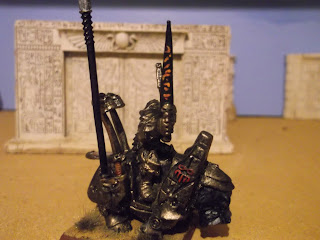 Right side view.
I am probably planning to add Khornate banners to the lances at a later date.
To add colour and background flavour I painted generic looking glowing runes to the sword. 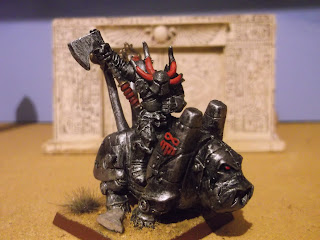 The 'Steel Officer'.
Keeping with the theme for these two offciers of blending with their demonic mounts, I opted for a steel look for this one. 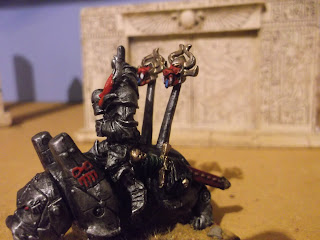 Left side view, with the demonic 'back banner heads. 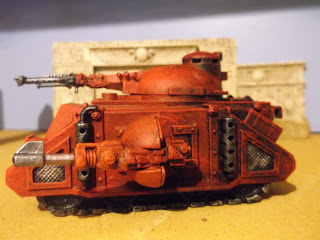 World Eater Predator.
As noted above, I wanted to break up the block of colour look to this tank, and to give it a slightly more unsual look and feel. So I painted the rear of the tank in the darker look, and make it look lighter towards the front. The photograph does'nt quite capture the contrast as well as in real life. 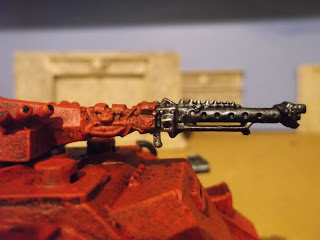 'New' Auto-Cannon.
As I lost the original Auto-Cannon I replaced it with this one, which I cut down to size and added to the turret. I think it looks suitability archaic and baroque. 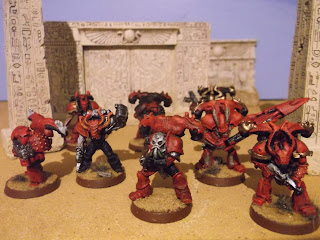 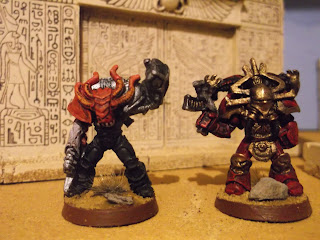 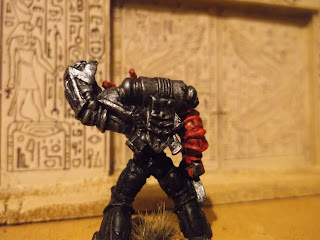 Rear view of the sergeant, showing the metallic look linking between the Power Glove and backpack. 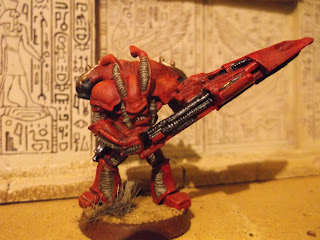 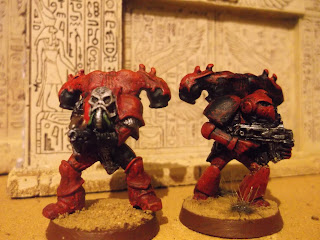 Renegades, one skull headed and other in Mark VI armour. 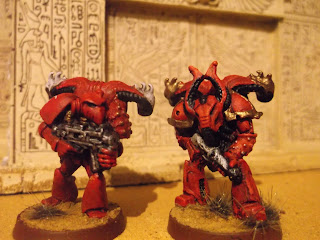 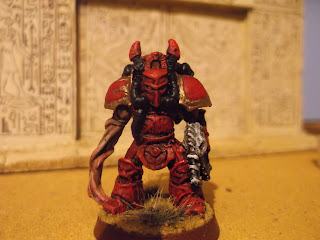 Renegade with tentacle arm.
He was orginally released as a limited edition LE101 Chaos Renegade Marine in 1988. I actually bought one at the time as a limited release, but have also bought the same miniature again subsequently. Personally, think he is one of the iconic looking Renegades of the ranges. I like the artwork of him in the Slaves to Darkness book, page 166. 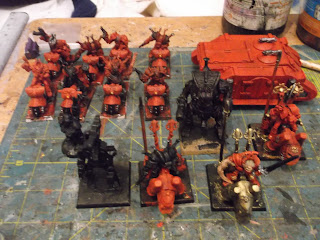 My painting table.
I have an Assault squad mounted on motorbikes, a Rhino, Chaos Dreadnought, three more Juggernaught riders, and a Robot with Techmarine.

Next update will be on probably be on more World Eaters!
Posted by Goblin Lee at 22:05