I have managed to finish painting my World Eater Assault squad mounted on Jetcycles this week. I had planned on doing more paimting, but I broke a tooth and then had to spend out good wargaming money on fixing it! Not sure which was more painful? ;)

The three army lists in the Slaves to Darkness book allow you to mount one squad per army in Mark 14 Bullock Jetcycles. This costs 110 points per Marine, and so the points paid are dependent on which army list you are using. World Eater squads are eight strong, therefore it's 880 point to upgrade. The lists do not specify which squad can be upgraded (unlike Chaos Steeds, Beast of Slaanesh, etc) and so I decided to choose an Assault squad as it seemed to suit them best. Also, I was running out of jump pack for all four Assault Squads.
The total cost of the squad, with an upgrade of Power Glove for the Sergeant, works out at 1,115. Of course that could increase with any addition of Grenades. So they are more a large battle squad, or misson specific use, even in the larger points Rogue Trader Armies.

Painting wise I painted them in the same manner as the rest of the World Eaters. I did however try to make them a little more colourful, and to make each of the 'Bloodletter Headed' renegades looks different from one another. As for the Jetcycles, I did consider a range of different colours to contrast against the red/black of the Renegades armour, but in the end went for a Khornate red as it seemed fitting. 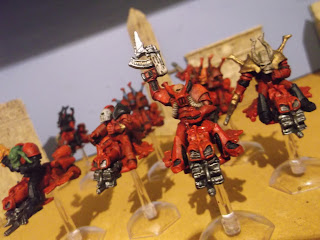 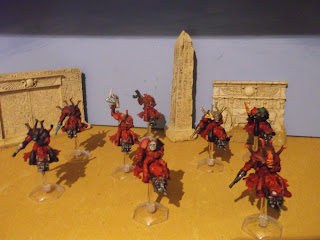 World Eater Assault Squad mounted on Mk 14 Bullock Jetcycles.
I have used the Marines from the mounted Renegades range as riders, excpet for the Sergeant. I chose specific, slighty crouched legs, which seemed to fit on the cycles better. I wanted to have a majority of the Khornate 'Bloodletter Headed' Renegade in this squad as they are World Eaters, but also a few others to add some variety. 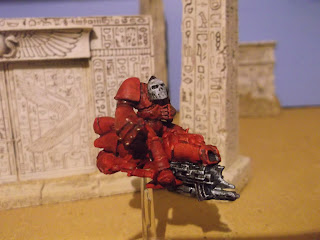 Squad Sergeant.
He is a mix of bits really. His legs are mounted Renegade ones, his body is that of a 1980's Citadel Chaos Knight, and his right arm is a RTB101 plastic Space Marine Power Glove.
I love the 'attitude' in his Skull face. 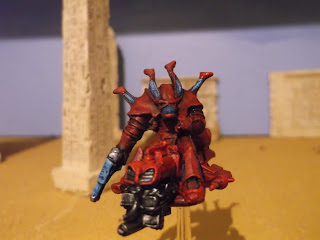 'Bloodletter Headed' Renegade.
The squad contains two special weapons; a Plasma Pistol, and a Hand Flamer. None of these weapons are present the actual models, and I did'nt want to hack them up. So, for the Plasma Pistol I dediced to paint the Bolt Pistol in a Plasma looking blue. I add the colour to the Renegade as well, for additional effect. 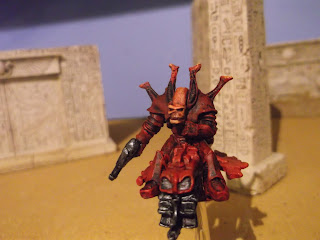 'Bloodletter Headed' Renegade, with a fire skull look to his head. 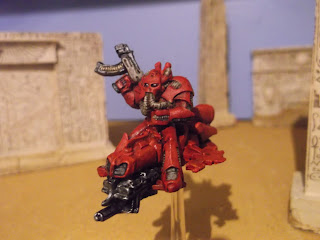 Renegade with lots of tubes in his armour. 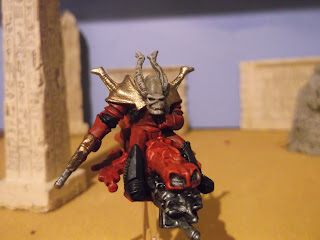 Another 'Bloodletter Headed' Renegade, this time with a Skull face and more gold on his armour. 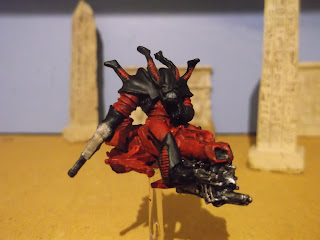 The last of the 'Bloodletter Headed' Renegades, with a dark look fron the black armour.
I painted it a little lighter than normal to give that 'biker black leathers' look. 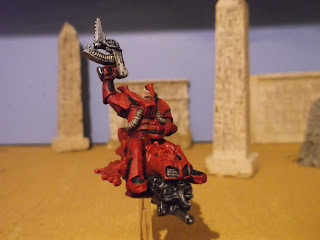 Bare headed Renegade.
I like this miniatures and really wanted to add him to the unit as to me he just exudes the speed appropriate for Jetcycles. 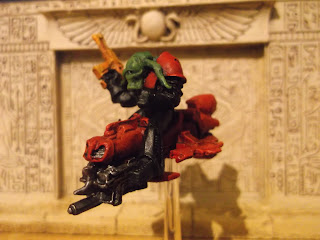 Lastly, a one-eyed, horned, Renegade.
As mentioned earlier the unit has one Renegade armed with a Hand Flamer. So I picked this model as the stand-in as the Bolt pistol has a long barrel that to me suggests aflamer based weapon. I painted it orange to differentiate it, something I plan to do with all of thehand flamers in my Legions, so I can locate them at a glance and unify the look of them. 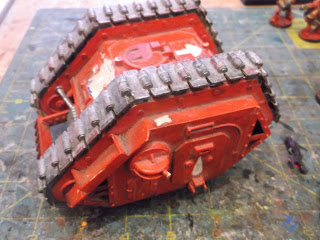 Ahem...
...I bought another Land Raider from e-bay.

This one only cost me £26, mainly due to the fact it had no guns. I'll tidy it up and either source some side Las-Cannons, or convert something up from Rogue Trader bits.

Next week will probably be more World Eaters. I am painting up Tactical squad, and have the Motor Bike Squad half painted on my desk.
I still need to make a start on the Officers of the Legion, the Terminators, and a series of general photographs of the all of the Legions. I'll see what I can get done of the next week.
Posted by Goblin Lee at 17:31