A quick and small update this week, this side of a weekend at work for me!

A while ago I purchased a small mail order of giant frogs for my Slann army/ies from a company called 'Toad King Castings', who can be found here: http://www.toadkingcastings.co.uk/  . Now I have not managed to get around to painting the giant frogs (or ordering some more, which I plan to do), but yesterday I did paint 'Terence Toad', a much smaller giant frog, smoking a pipe.

I love this miniature. He's cute, and has a sweet twee vibe which I only usually get from Hobbits. This to me is the Slann version of a Hobbit. I had planned to just place him in a random Slann regiment as a curiosity, but now I have painted him, I might use him as a low level Slann Wizard, perhaps a Wizard who's spell has gone wrong and turned him into, er, a smaller frog!

Painting wise he was very quick and easy to paint. Two tones of green, eyes, and a pipe. The main effort was in the base. I put the frog on a lipped 25mm square lipped base, with him sitting on a slightly raised mound of Miliput. I then painted the inside of the base dark brown, and added some grasses, a water lily, and a few tiny stones. After that I added some 'Solid Water' water effect resin to suggest he was sitting on a mud mound in a pool of water. I have never used the water effect resin before, and testing it out was the main reason I painting him (that and the cuteness!). I am really happy with how it all looks, and I will be using it a lot more, especially with the Slann and Eru-Kin. 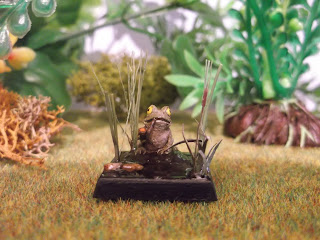 Terence the Toad, smoking in the jungle. 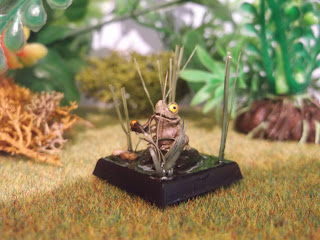 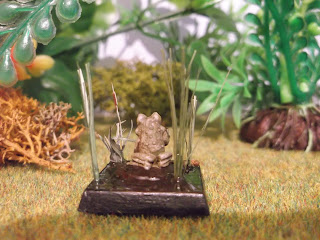 Back end of a smokey Toad! 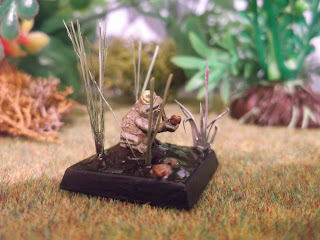 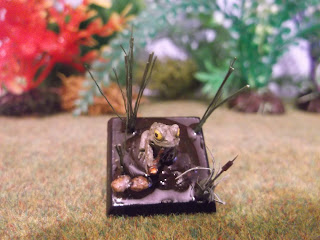 Tilted view of the base.
I added the water effect up the the top of the lip of the base. It just covered part of the stones and the lower part of the little mound of mud he's sitting on. It pooled in the deeper dips of the base as planned. It is meant to take 12 hours to dry, but given yesterday in Sussex it hit 34.5C it set in about 4 hours! 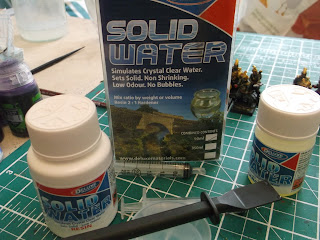 Water effect resin kit. I bought it from (yet another) model railway shop for about £10.
You have to mix the two different parts of the resin kit in the little tub and then pour out where required, and was very easy to use. 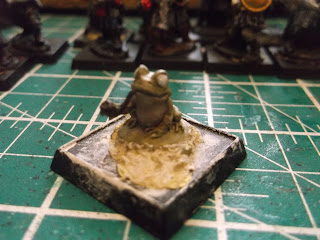 
Next update will be Dark Elves.