About three weeks ago, as the Snakeman project drew to a close, I started painting my pre-slotta Dark Elf army. Now I already had a Dark Elf army made up from Citadel's mid/late slotta based C09 Dark Elves, and the Marauder Miniatures ones. However I never really liked the army or felt that they really had the right 'vibe' for the Dark Elves. So last year I decided to collect a 'new' Dark Elf army, from the pre-slotta range of Dark Elves, adding to the ones I already had.

I always liked the pre-slotta Dark Elves. The style and sculpting seemed more understated and better to me, and they seemed to work as a range as a whole. The simliarity of thier weapons, helmets, shields, and cloaks gives the range a coherence, without being the same, or too disperate. I was'nt overly impressed with the later 1980's slotta Dark Elves, and I really dislike the pudgy and round faced Marauder Dark Elves.

Painting wise, looking at the pre-slotta miniatures the helmets suggested to me a Classical Greek look, and the rest of the equipment and armour a Byzantine look. So I decided to go for a lighter look for the Dark Elves, with less purple and blacks, and more colours, and also with more slivery chainmail. In keeping with the Greek look, I have opted for bronze shields, scale armour, and helmets, with a little verde gris. I am also going to paint some Ancient Greek looking shield designs as well.

The only exception to this is the Mengil Manhides Regiment of Renown, who are a lot darker, in line with their description in the background. Also, I am undecided on how to do the bases. I want to avoid the snow look, so might go for a forest look, as that is suggested in the 1st Edition Dark Elf background in the 'Forces of Fantasy' supplement. In the Forces of Fantasy book (of the Forces of Fantasy supplement) it describes the Dark Elves as "Driven from the Elven lands they took refuge amongst dark forests and caves until, many years later, they established a small independant kingdom".

The older, 1st Edition Warhammer background of the Dark Elves being more forest orinetated suggests to me the idea that this army and the pre slotta range are more akin to an earlier era of Dark Elves. As some of the miniatures still have bows rather than crossbows, and as the Dark Elves still have a High Elf look to them with the long chainmail coats, then I like to consider that this army is a representative of an early Dark Elf army, just after their exile from the High Elves. The Dark Elves with bows I will be counting as army with crossbows for gaming purposes. 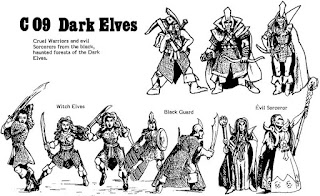 Some of the pre-slotta Dark Elf range. 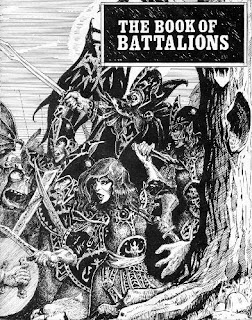 Artwork from the Forces of Fantasy supplement for 1st Edition Warhammer Fantasy Battle. 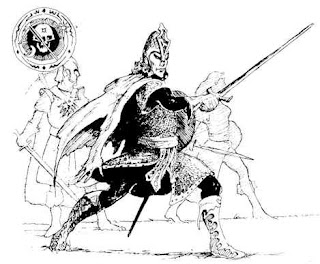 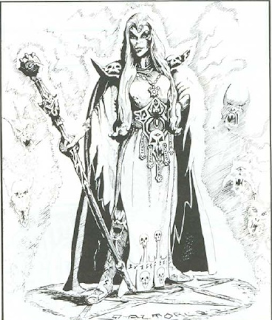 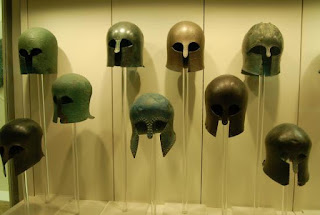 Ancient Greek helmets, which made me think of the similarity between them and the pre slotta Dark Elves. 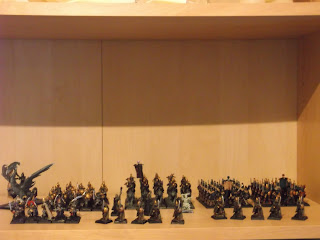 A very poor army wide photograph.
Once I paint the army I shall do an overall army photo-shoot on a gaming table, as I did with the Snakmen. The army is still very much a WIP, but I have a lot of the miniatures to a level where it's only the shields and bases which require attention. 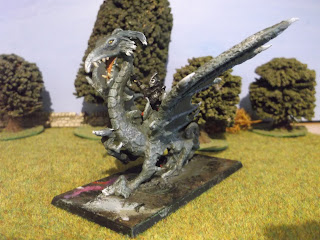 Army General on Dragon.
The Dragon an old Aureola Rococo model, which used to be painted gold and part of my Bretonnian army, but seems more at home with the Dark Elves.
The General is a slightly converted Dark Elf Cold One Rider. 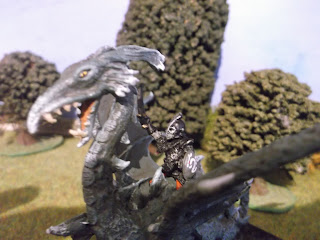 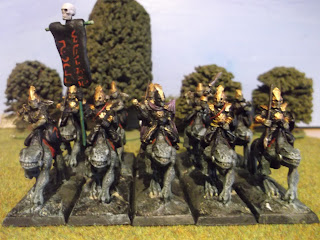 C21 Dark Elf Cold One Riders.
I have converted a standard bearer for the unit, and opted for a grey-green granite looking colour for the Cold Ones. 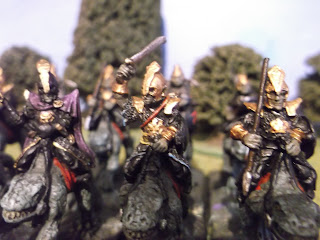 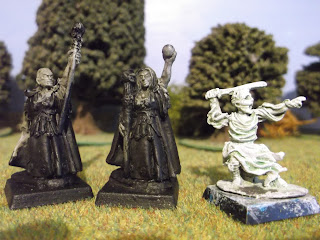 Dark Elf Sorcerers WIP.
Also there is magically bound Ghost, an old pre-slotta Ghoul miniature I think, and it's actually one of the first miniatures I ever owned. 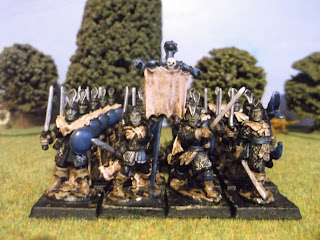 Mengil Manhides Regiment of Renown.
The background of the Regiment is that they are dressed in dark clothing and wear the skins of poor unfortunate humans who have crossed their path. 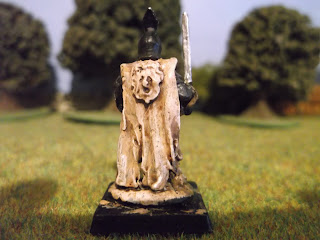 Rear view of the flayed cloak. 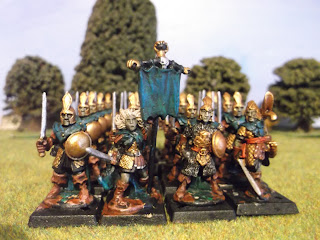 My second regiment of Mengil Manhides Dark Elves.
I did just want to paint the second Regiment the same as the second, so I when for a sea raider feel for them, with sea gree/blue cloaks, and bronze armour. I also swapped out the Mengil miniature for a C09 miniature as a unit leader to differentiate. 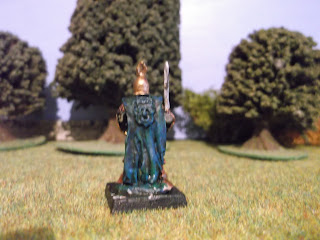 Rear view of the cloak. 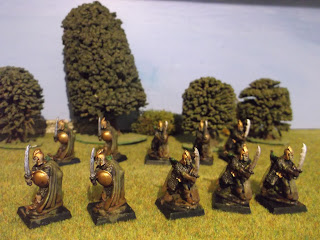 10 Dark Elf Shadows (Scouts).
I will split these into two units of five. I painted the cloaks as dull and dirty greens to a suggest weather-beaten look. 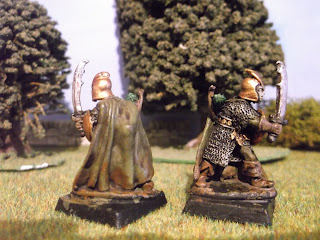 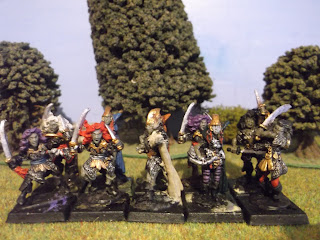 Witch Elves WIP.
Instead of just lots of purple of later paionting styles of Witch Elves, I have gone for a mix of colours. I have also added a few 'gothy' details such as stripey legging and dyed hair.
I like these Witch Elf miniatures much more than the later versions. Their look is more practical and sensible, just like their male counterparts, rather than clad in chainmail bikinis with hairsprayed hair like the later versions! 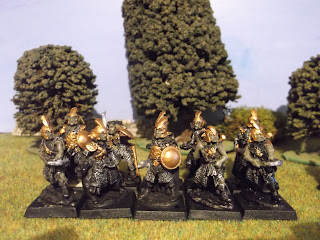 Dark Elf Crossbows WIP.
These a mix of the C09 range, and are going to have bronze armour and shields. 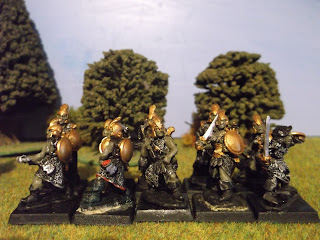 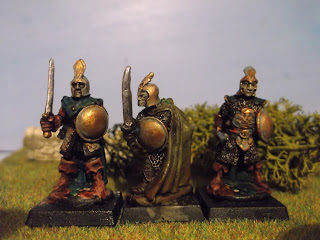 UPDATE.I have verde gris-ed the bronze armour. I still have the shield desgins to add, but they are that one step closer.
Next update will be some more of the Dark Elf army, as well as a few random things I want to add.
Posted by Goblin Lee at 18:58