The 101st Catachans, a Dwarf army of renown, Hobgoblins, and a very old carrier bag.

Although I already have an Imperial Guard/ Astra Militarum army in the form of the Praetorians, I wanted to do something with the metal Catachans (I was never too taken with the plastic versions) I owned. I also wanted an army that was more 'run of the mill' and less rare than the Praetorians. So, I have embarked on painting Catachans.

I like the Catachans. I like their independent nature (killing Commisars is fine by me, I never liked them or the idea) and they are a constrast to the spit and polish Praetorians. Most Catachan armies are, by virtue of the design style of the miniatures, Vietnam war era American themed. Instead of Jungle Warriors, with green combats, I have opted for a slightly different approach. As some of the Catachan miniatures have mohawk haircuts, which reminded me of the American 101st Airbourne of World War Two. So I have chosen them as a template for my Catachans.

I am painting this army, for the gaming table. I am not going to spend too much time and effort on details, but get them ready for a return to 40k gaming. I will return to them once the army is painted to add details such as eyes, and the 101st warpaint.

In addition, I have been sorting out my 3rd edition Warhammer Fantasy Dwarf army. I already have a completed army, but I wanted to do something different. I wanted to base my Dwarf army more on the Regiments of Renown, especially Prince Ulther's Dragon Company. So I have added two more regiments to the two I already owned, and in addition added and expanded Bugmans Dwarves, padded out with several interesting 1980's crossbowmen.

During a conversation on the Oldhammer Facebook group about Pygmies, I was asked how many Hobgoblins I had. So, I have added the photographs of the Hobgoblins I also added to those. 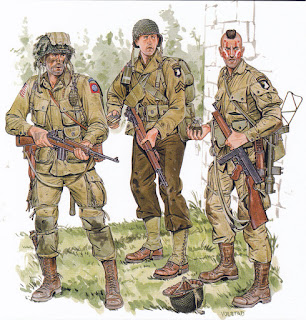 The 101st Airbourne.
I found the artwork via a google search. It looks like an Osprey piece, but whosever it is, it belongs to them. 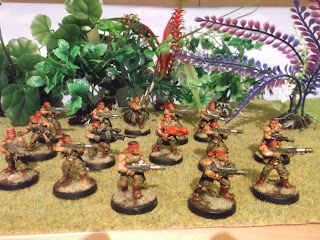 An evenings worth of painting. 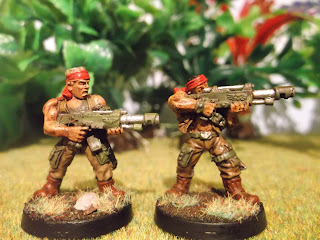 Las gun armed troopers.
I have painted the combats Vallejo US Field Drab. They are basically painted, as I want to get them done. I will go back and added other details once the bulk of the painting is done. 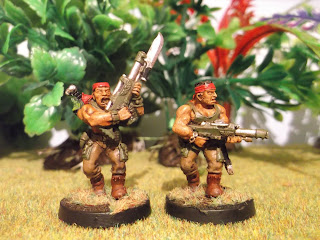 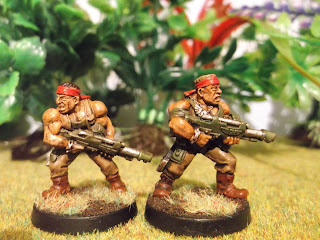 Troopers.
The one on the left has the 101st Airbourne mohawk. I will add warpaint at a later date. 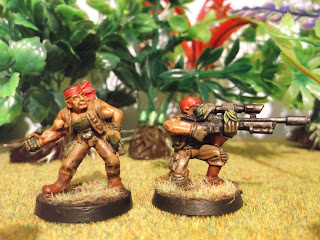 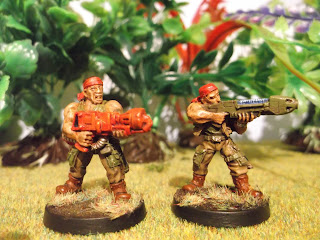 Flamer and Plasma gun.
I have opted for the go old 1990's red look of the flamer. It seems to suit them, and will be easy to find on the gaming table. I did'nt go the the same red for the lasguns as I always thought it wasa little too much. 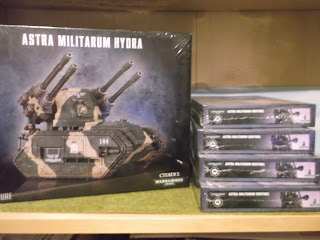 I have some gluing to do!! 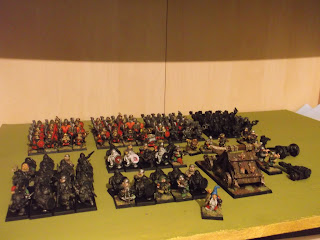 The Dwarf army of Renown.
It consists of for Regiments of Prince Ulther's Dragon Company, and the Prince himself as General; 20 Bugmans; two regiments of 10 crossbowmen mixed with Bugman Troopers; the Goblobber; two cannons; and a Wizard. 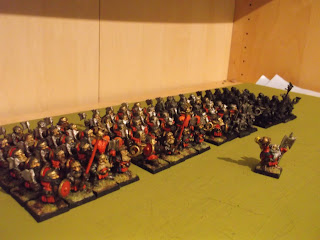 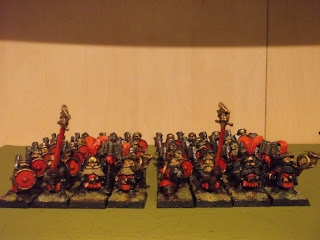 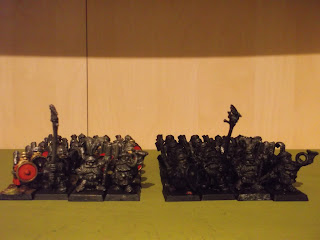 Second two.
I have given the regiment on the right a different type of shield in order to use them as an elite. 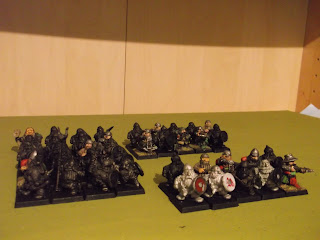 Bugmans.
Like the Dragon Company, I have expanded the regiment. The main regiment will be a normal warrior unit with crossbows, th other two will be crossbowmen unit in support. 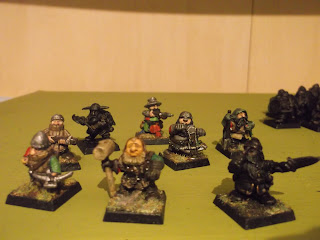 The additional miniatures added to Bugmans for variety. 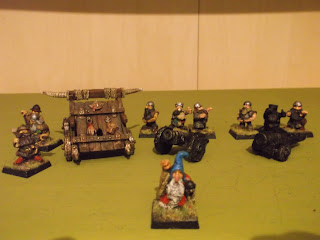 Goblobber, cannons, and Wizard. I have the rest ofthe Goblobber crew, I just need to find where I put them! :) 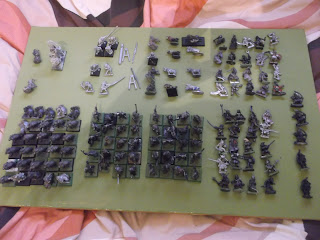 1980's Hoblgoblins.
They are a mix of Citadel C36 pre-slotta and slotta Hobgoblins. They are all either badly painted, or unpainted, but one day I hope to paintstrip them and repaint them. 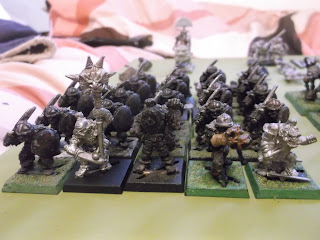 The RR15 Despoiling Hobgoblins of the Darklands Regiment of Renown. 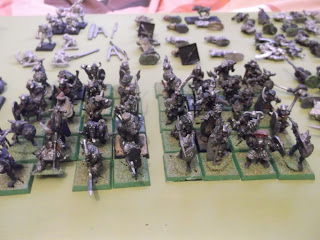 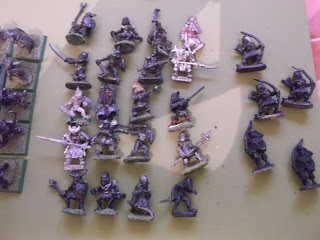 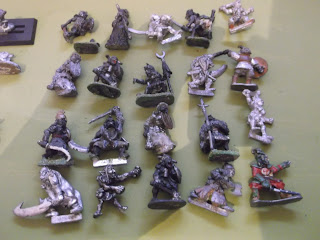 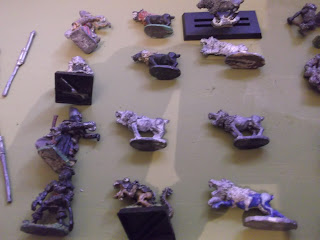 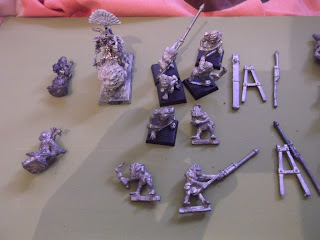 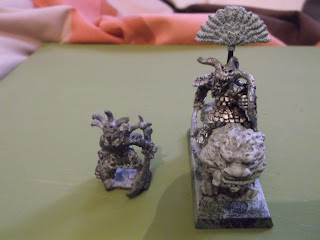 On the left is Gyokurinti the Strangler.
On the right Manic Hobgoblin Hero from the BC 2 Monster start set, mounted on a Temple Dog. 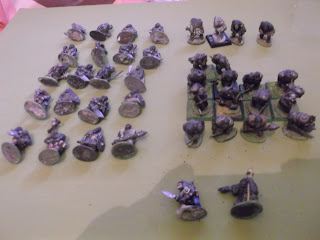 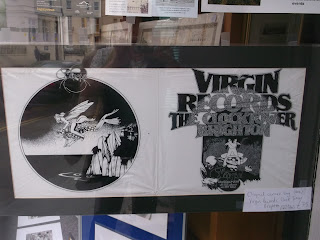 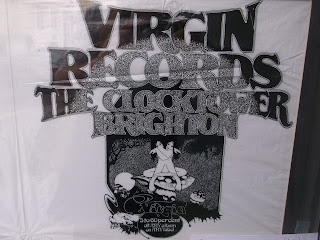 Close up of the front, with the old Virgin logo, drawn by Roger Dean. 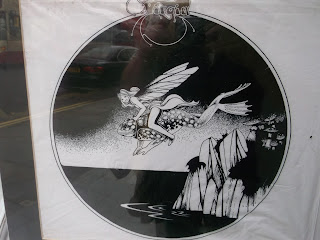 The rear view of the carrier bag, with a fairy riding a frog.

Next update will probably be more Catachans, although I am relly keen to sort out my Slann and paint the Melniboneans.
Posted by Goblin Lee at 22:16