I've felt I have neglected my Fantasy Tribes Gnolls/Great Goblins and Dwarves for far too long and had a yearning to paint some before I start any next project.

As anyone who has looked at my blog before, they will know my love of Goblins, and especially the old Fantasy Tribes Gobliniods. This also extends to the Fantasy Tribes Dwarves, which I have'nt really painted much. So I picked a few Dwarves to paint, and some Gnolls/Great Goblins to paint or repaint, as well as the Gobbledigook miniature from the White Dwarf comic strip, and a more modern cottage scenery piece. 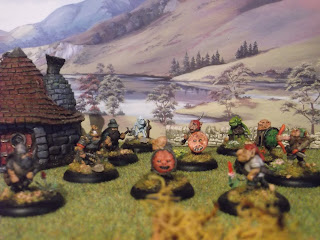 Dwarves and Great Goblins clash in the hills during the 'Goblin Wars'. 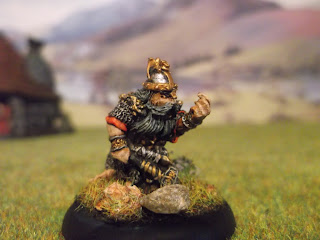 Thorgrimm Brandedimm.
This miniature was available via from Mail Order after collecting vouchers. He was also the Dwarf Chieftain in the 1st Edition Warhammer scenario 'Ziggurat of Doom', and armed with the magical hammer 'Foebane'.
I really like this miniature. I like that he is beckoning, taunting, any foe (probably Goblins :/ ) that stray close. His Dragon Helm is great and detailed . The photograph is'nt that great, it make the miniature look darker that he is, but we have had some odd lighting in Sussex today! 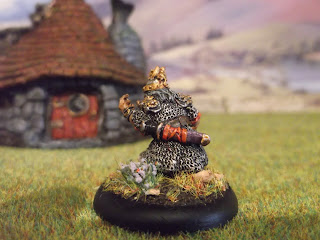 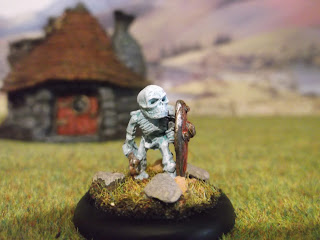 FTS11 Dwarf Skeleton with Axe and Shield.
Again another miniature from the Fantasy tribes era I really like, this time Skeletal Dwarf. I painted him with Citadel's Nihilakh Oxide over a white undercoat to give that spooky feel to him. I only bought him recently, earlier this year, but have been wanting to paint him. 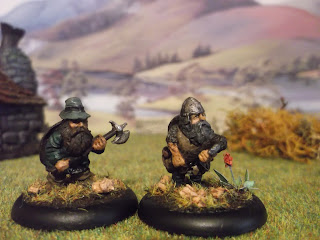 A FTD3 Dwarf with sword and polearm, and a  FTD2 Dwarf  with light Crossbow and sword.
The Dwarf with polearm is wearing some sort of Tyrolean Alpine Hat, so I painted him up in alpine greens. 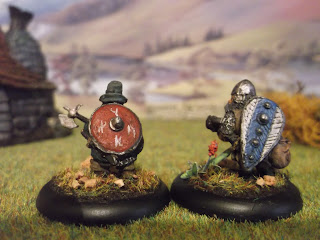 Rear view.
The runes on the back of the read 'Karl' in Dwarf runic script. I thought that might be a good alpine Dwarf name. 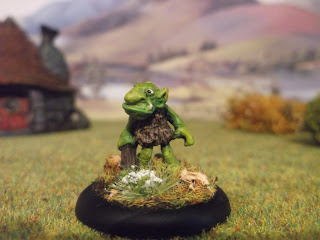 Gobbledigook.
He was a little Troll in an occsaional comic strip featured in White Dwarf in the mid 1980's. The miniature is from the SS6 White Dwarf Personalities box set. 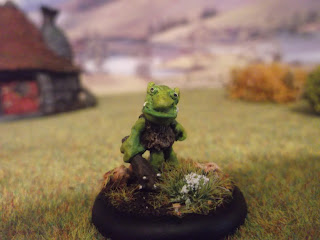 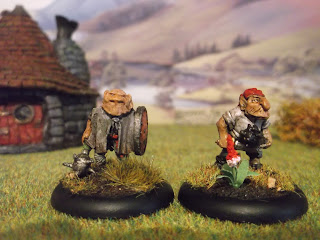 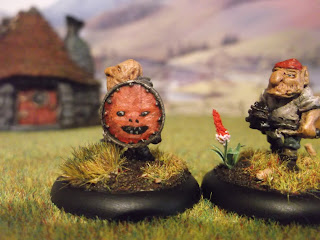 Shield.
I tried out the shield painting guide in White Dwarf #101. 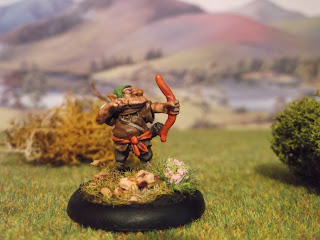 Another C12 Great Goblin, this time an archer. 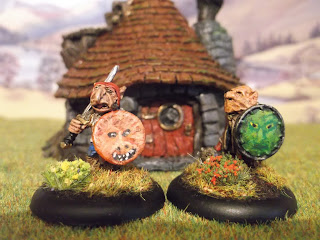 On the left a FTG3 Gnoll/Goblin standing with hand weapon, again, another trial using the White Dawrf #101 guide.
On the right is another of the C12 Great Goblins, this time with a 'Green Man' style shield.
I am not a great painted when it comes to shields and banners, but I am looking through and trying out the old painting guides and artwork and deciding to give it more of a go. 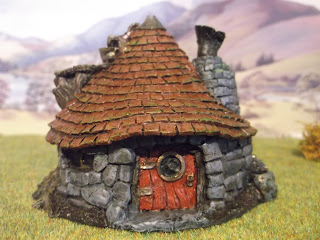 Cottage.
I bought this cottage last year at Salute from Twilight miniatures as a ranodm Goblin-esque piece of scenery. I really like the detail and look of it.
Their website can be found here:
http://worldoftwilight.com/Miniatures.html 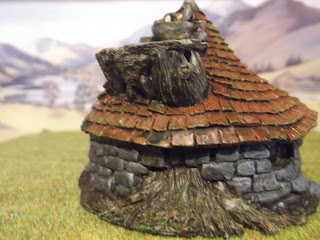 Side view, showing the tree stump which the cottage is built around. 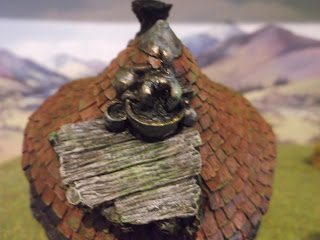 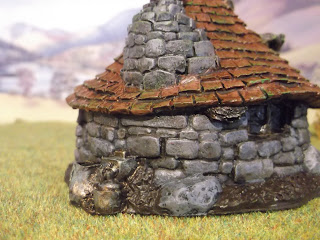 The other side with water-butt. 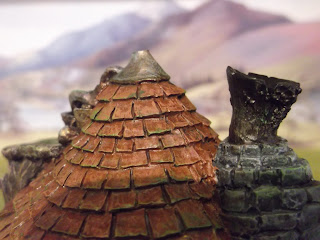 Roof tiles and wood stump chimney top.
Next weeks update might be on more Gnolls/Great Goblins and Dwarves. I am also writing a history of the 'Goblin Wars' based on the background and infomation from 1st and 2nd Edition Warhamer Fantasy sources.
Posted by Goblin Lee at 20:54