It's been a little busy at work over the last week, but still managed to paint some more Pan Tang infantry.

I have continued keep the scarlet red armour, but have added more sea themed colours to armour and helmets. The Pan Tang infantry often have sea creature shaped helmets, and so I have painted these in sea themed coloured. I also think that this will add more colour to them and break up the block of red look. Using the bold and bright colours is I feel more reminiscent of some of the 1980's art work as well, especially in the Stormbringer rulebook.

In addition I've added two of Theleb K'aarna's bodyguard to the army. They are described as one being obese and having the head of a pig; the other being Snake-headed and long necked. There are several types of miniatures I could have used, but I thought it would be nice keep with the 1980's Citadel Miniatures theme and sculpting look.

So for the pig-headed bodyguard is used a C27 Chaos Beastman named 'Guzgog'. Although more boar looking, I think he works well. For the second bodyguard I used a C27 Snakeman. I think the description suggests he is just Snake-headed and long necked, but I think that the Snakeman in his heavy armour fits the look. There is an old pre-slotta C38 Beastman which also fits the description, named 'Snakeman', but I was'nt too keen on the look or sculpt fitting in with the sculpting of the Pan Tang.

Other than that I have received my other Pan Tang Tiger in the post from e-bay, and another Pan Tang Infantryman. This means I now have four Tiger teams, two with actual handlers, and two with Pan Tang infantryman handlers. 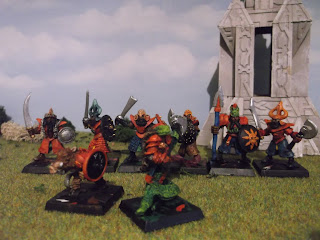 This weeks batch.
I still need to do the bases, which in retrospect I might do for all of them in one go, once I have painted the army. 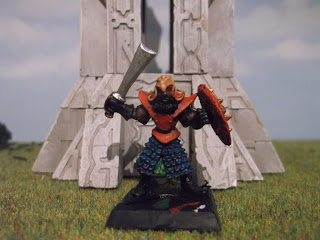 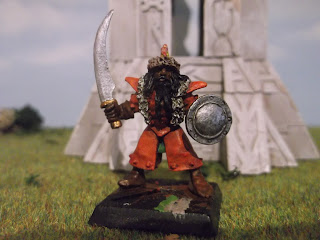 Voorg.
The shield is an old Hasslefree one, painted as a metal buckler. 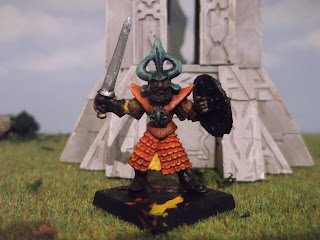 Krool.
His helmet is some sort of squid and so again is went for a more aqautic colour rather than just red. 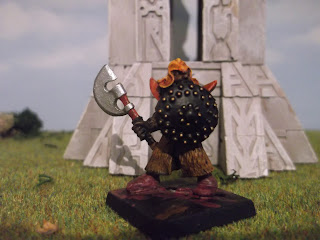 Tashim.
He has an Octopus looking helm, which I painted a brighter orange. 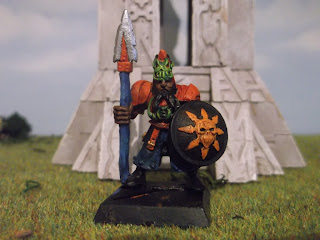 The Chaos Warrior range 'Pan-Tangian' spearman.
I made use of a big Marauder Miniatures plastic shield, and painted the sea-monster on the helm in a contrasting green to the red armour. 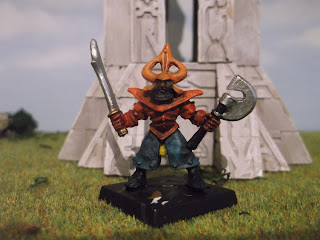 Vandar.
I am using another one of these miniatures as a Tiger Handler. 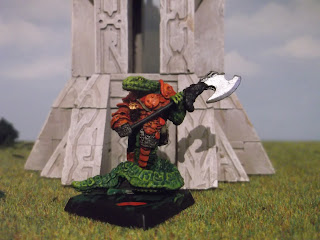 The first Theleb K'aarna's Bodyguards.
I have used S'sirron Fangthrane, one of my favourite C27 Snakemen miniatures (although they are are fantastic). The background in the Strombringer rulebook described the Snake-headed bodyguard as having a 'Lormyrian axe', so I chose a miniature with that theme. 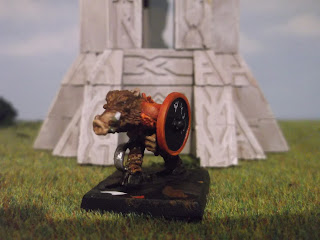 The second of Theleb K'aarna's Bodyguards, C27 Slotta based Beastman, Guzgog.
In his description in the Stormbringer rulebook he is mentioned aswielding a simitar and target. Although the miniature has a sickle, it's close enough for me. 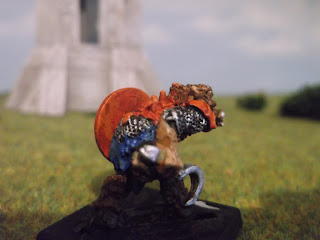 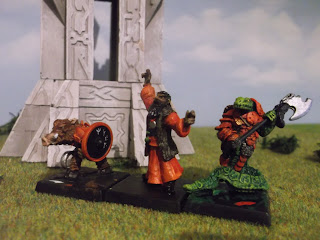 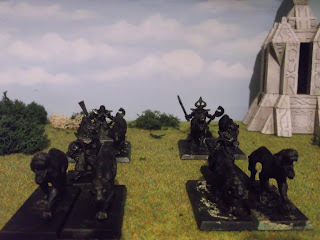 The four tiger teams.
They're greea..., well you get the idea, but they do look fun. I am a little daunted when it comes to painting them, but willing to give painting Tigers a try. The handlers will also have tiger themed armour to tie in with their charges.

Next update, more of the Pan Tang.