I'm currently on holiday, which should in theory mean I could be getting more painting done. However, I have been bimbling about the Sussex countryside, and meeting up with friends in Brighton, and so in fact less painting has been achieved! At least so far anyway, but I still have a few days left.

What I have done is painted two more Pan Tang infantry, including a standard bearer. I read somewhere that the banner of Pan Tang was a Merman (as well as using the Chaos symbol). So I thought I would give the idea a go. After a quick Google search I found several designs for Mermaids and a few for Mermen, including an undead Mermaid. I decided to adapt the Undead Mermaid to a Undead Merman as it seemed fitting for the evil Pan Tang.

I'm not a great painter of banners, but this banner proved to be very quick and easy to do, and I felt with a little more care I can achieve better banners in the future. It's a basic banner, but encouraging that I painted it in about 5-10 mins.

In other painting, I miss the Slann, which I have neglected for some while. So I painted up a spare Slann, who wll be heading to the Spawn Bands. I also painted an old C01 Fighter, whom I intend to use in my upcoming Araby/Haradrim army. Finally I repainted the old C22 Chaos Demon, which I had painted a few years ago, but never liked the finished work. Being odd and naked, the Demon might be NSFW. 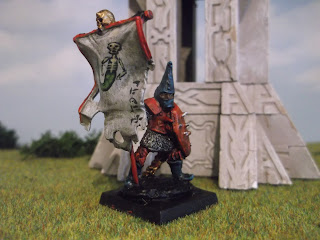 Pan Tang Standard Bearer.
He is converted from a broken Citadel SS1-2 Chaos Warrior, Ogroth Darksoul. The banner is a plastic one from the current GW Grave Guard set on brass rod. 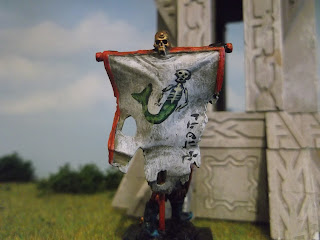 Close up of the banner. I think that the Undead Merman looks fine and was fun to paint. I added some random runic/magical script on the banner to fill up the space. I painted the banner a canvas colour to suggest a ships sail. 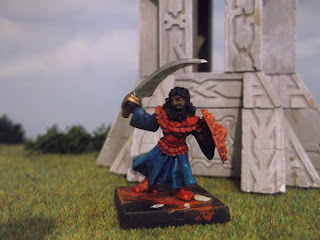 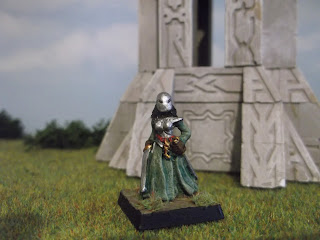 A Citadel C01 Fighter, 'Klotilde Ironface'.
She is an early slotta based miniature from 1985 and designed by Bob Naismith. She is tiny ! She is actually based on a 20mm base. I have owned her since the 1980's, but paint stripped the dull paint job from then a while ago. She is wearing a full face mask, hence her name I assume. 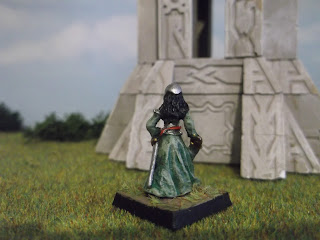 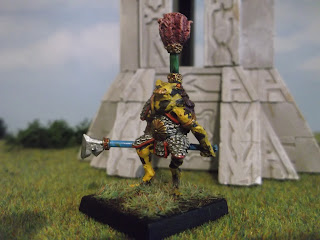 The C32 Slann 'Pintamilkada'.
I used 20 of these as alternative Alligator Warriors, with double handed weapons. I have a few spare, and so they will end up in the Spawn Bands. I am glad I had a few more because I wanted the chance to paint some of them up in a different style to the Alligator Warrior look I gave the others. 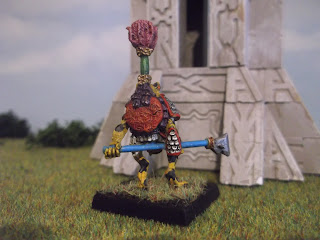 Rear view, with all the great sculpting details. 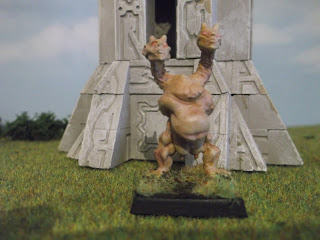 C22 Chaos Demon.
I don't like two headed creatures as a general rule, but I like this miniature. I originally painted this miniature a duller colour, but it never really suited it. So I have opted for a flesh colour to give it a creepier feel. It has no arms, however it does have legs and feet that look like arms and legs, so I am wondering if the legs are really it's arms, and its legs are now it's necks!? 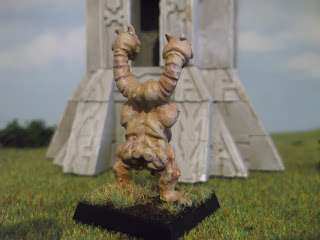 Next week should be more Pan Tang. I only have nine actual Pan Tang range miniatures left to paint, then onto the Tigers, archers, and maybe a few Chaos Warriors if I include them.
Posted by Goblin Lee at 13:32