It's Deadcember, that time of year for Oldhammer-ers to paint something Undead related.

I have chosen paint an old Citadel Horseman of the early 1980's. I had planned to paint a lot of other things as well. However, I have been very busy at work with Xmas, been lost in sorting out my Oldhammer era miniatures in armies (more of that in the new year), and I have also been very very unwell after having an allergic reaction to lunch one day (I am lactose intolerant). This is also why I still have'nt photographed the Pan Tang.

As for the Horseman, he's a two-piece old pre-slotta miniature. Originally he was the FF66 Skeleton Rider on Horse from Hell, from the Fiend Factory range from 1982. Later, he was moved to the C21 Fantasy Cavalry range in 1983, and re-named 'Skeletal Fanatic'.

I have been informed that the later C21 version was a one-piece casting, rider and horse no longer seperate. That suggests to me that the C21 version was a 're-casting' by Citadel of the earlier FF66 version. This something which Wargames Foundry have been doing in order to re-release old 1980's Citadel ranges. It would also suggest that the C21 might be slightly smaller than the FF66, as with Wargames Foundry's miniatures, although I don't know for sure as I only have the FF66.

The sculpting is superb. Whilst the nature of the miniature require very little detailing, the actual sculpting of the robes and horse give a great sense of movement. It is one of my favourite miniatures.

I have painted him up for use as a Spectre in Warhammer fantasy Battle 3rd Edition.  It was a very quick paint job. Black undercoat, drybrush with white, and a wash with Citadels Nihilakh Oxide Technical paint. I added a couple of flowers to the base to give the almost artwork feel to the miniature riding through a meadow. 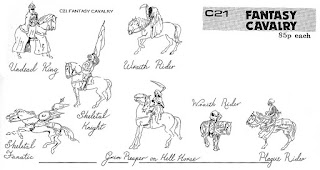 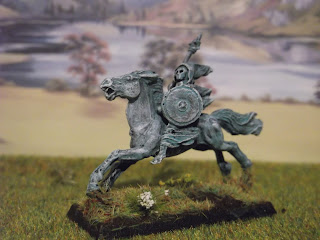 Lef hand side, shield side. 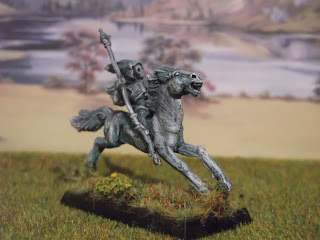 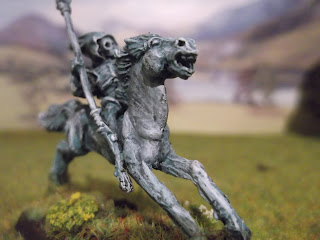 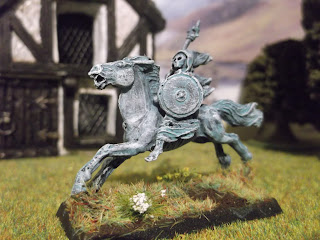 Not Santa, but the Nightmare before Christmas!


Next update should be the Pan Tang army photographing.
Posted by Goblin Lee at 18:44