The McDeath scenario.
This is something I have wanted to approach for a while. I have always liked the scenario, but it's only in the last few years I have got around to collecting the miniatures for it. My aim is to have not only the forces required to play the scenario, but also use those forces for the basis of two 3,000 3rd Edition Warhammer armies; McDeath's (Orc and Goblin list); and the Rebellion of the Just (Norse list).

There will be several updates on the McDeath Scenario, but this one is focusing on Lady McDeaths pet hound, 'Spot'. Spot is a two-headed Chaos hound, which breathes fire, has Iron hard skin, and has a Scorpion Tail mutation which can deliver a poisoned attack. In the scenario, Spot is Lady McDeaths pet, and obeys a limited series of commands.

I have collected all but three of the character models from the release sheet, I don't have Sandra Prangle or Markus Grimmock, but I do have stand-ins. The third model was Spot. The original Spot miniature is one of the Chaos Hounds from the C22 Creatures miniatures range. However there are two similar two-headed Chaos hound miniatures, and I have the other miniature than the one featured in the Scenario release sheet. When I picked the hound up from e-bay, it was missing it's tail, and in need of repair. So I added a spare tail I had from the C29 Giant Scorpion, all achieved with a little drilling and pinning.

I based Spot on a 50mm square base. I tried a 40mm base and a 25mm x 50mm base, but both seemed a little too small. As I intend to use but Spot, and the Beastie of Loch Lorm, as 'counts asTrolls' in a 3rd Edition Orc and Goblin army of McDeath (more on this in a later update), I wanted both to have the same base size. Both work better on 50mm, so that's how they ended up. Painting Spot was easy. I just copied the paint scheme from the McDeath Gamesmaster Guide cover artwork. It was just a mix of browns/beiges/ and white, over a black undercoat.
I am very happy with how Spot turned out. 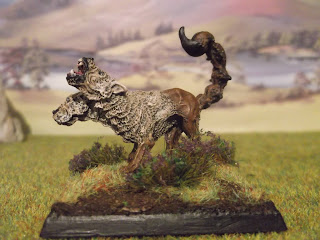 'Spot' from the left side, showing the howling head. The other C22 Chaos hound, the 'actual' Spot, has the howling and closed mouth heads around the other way. 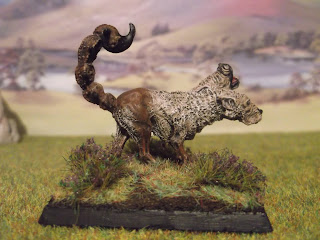 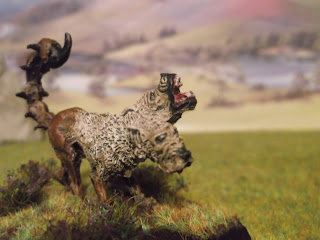 Slight close up of the heads. 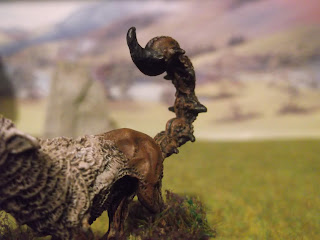 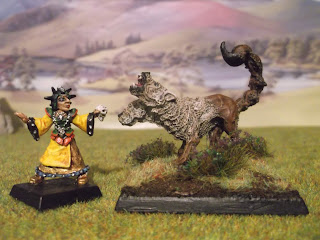 "Fetch!"
WIP Lady McDeath shown next to Spot for scale. I think that the 50mm base gives Spot a better and bigger battlefield presence, more befitting such a fearsome beast. 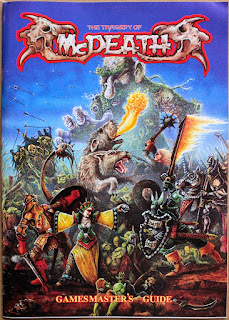 The Gamesmaster's Guide for the McDeath Scenario showing Spot. The tail in the artwork is slightly different, but I thought that the tail I had would work nicely.
Next update will be Lady McDeath. It's about time I finished painting her. I might get McDeath himself painted if I have the time.
Posted by Goblin Lee at 21:18