I have completed the Empire Helblitzen Regiment from page 58 of the Warhammer Fantasy Battle 3rd Edition Warhammer Armies book. I detailed the background and miniatures in a previous blog post here:
http://goblinlee.blogspot.com/2022/02/helblitzen-regiment-project-part-one.html

Collecting and painting the regiment was quite enjoyable and it was satisfying to see a regiment from the Warhammer armies book in reality. Although, of course, it is not the original regiment, I had collected the same miniatures, and then painted them in the same style and colours in which they were painted in the photograph. This did mean sometimes painting parts of them in a style I would not have ordinarily chosen, but this did make for an interesting exploration of the styles and colours used by GW's studio at the time. Some of this also meant a combination of looking for the miniatures in old citadel adverts, peering at the the photograph intently, and a little guesswork for some of the more obscured parts. The only concession to modernity was adding them to a movement tray, and adding some tufts to the bases.

The original photograph on page 58 of Warhammer Armies. 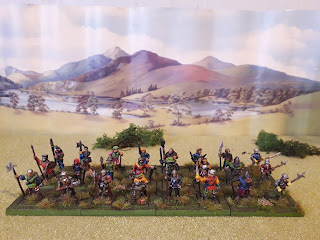 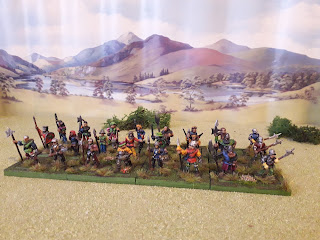 I have no idea on what my next blog update will be as I have several options for painting at the moment, but I am eager to start an army.