Ok, this isn't the "Oldhammer themed showcase of something quite special and interesting" as promised, as the absence of available time has intervened to delay me, but soon, I promise.

However, in the last few weeks I have been tinkering with my 1st to 3rd Edition Slann collection. I have converted some Cold One riders, and also painted a couple of new background boards, three step pyramids to grace the jungles of Lustria, and finally I have painted 26 Slann.

I am not going to focus on painting Slann at the moment as I have some other areas I am working on, namely the cataloguing and organising of my 3rd Edition Warhammer Fantasy Battle Armies. It was however quite fun to back to the Slann for a while. Anyway, for now, here are the Step Pyramids and the Slann blowpipes. 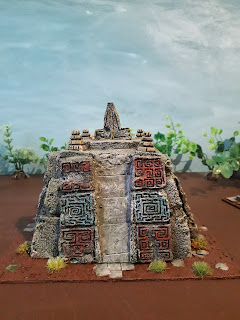 The first pyramid was originally produced in the 1990's by Fantasy Forge miniatures, then by Grendel Miniatures. It is currently being produced by Scotia Grendel, and like all three of the pyramids it is made from resin, although unlike the others, this is a multi-part kit.
For a step pyramid it's an odd design, not very 'stepped' really. However I do quite like it, and it has a weird sci-fi Slann feel, and I can imagine Slann leaping up the sides.
I based all of the pyramids on plastic card, and then added plastic card squares to the bases to look like ruined flagstones. 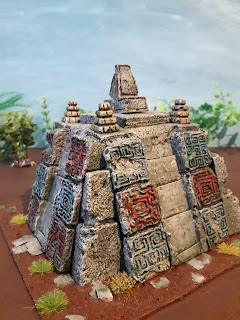 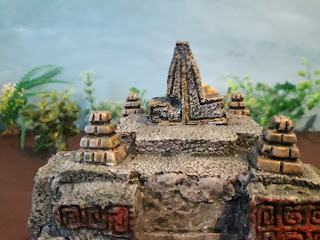 The top of the pyramid.
The decoration looks sort of Aztec-ish, but also has a weird alien look to it, suggesting some sort of magical or arcane technological function. It reminds me of the 2nd Edition Warhammer Fantasy rules for Power Weapons where they drag the unsuspecting wielder to pyramids in Lustria to perform routine chores and lever pulling (it's true, look it up, p28 of the 'Battle Magic' Book!). 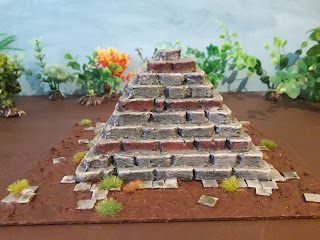 The larger of the two more normal looking step pyramids.
I cannot recall from whom I bought them, but it was at one of the Salute conventions a good few years ago. I painted a little bit of colour on every third step to break up the grey, and add some Slann mystic mystery. 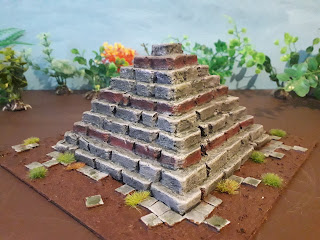 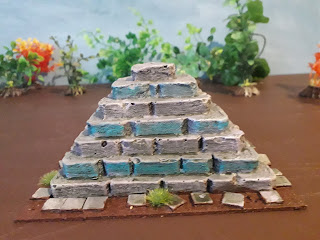 The smaller of the two pyramids.
It's just like the other one, but smaller and with blue every other second step. 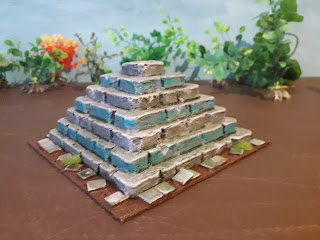 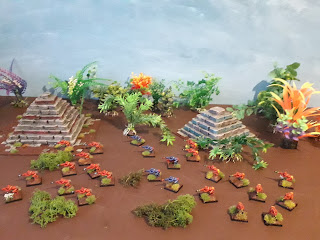 25 Slann Blowpipers moving through the jungle and past ancient pyramids.
Some time ago I painted 20 of the C32 Slann 'Akabylk' miniature, but I grew unhappy with the way they looked. So I had decided to split the regiment of 20 into two units of 10, and update the paint work making each unit slightly different. I have based the look upon the description of the Venom Tribes.
In addition, I painted another 5 in blue, to fulfil the function of Scouts. 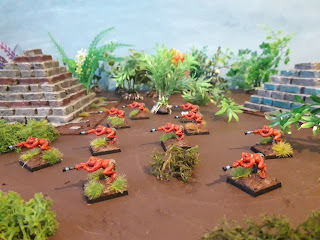 The first unit.
They have green loin cloths and a blue markings on their blowpipes. I painted different marking on the blowpipes to help with quick and easy battlefield identification. 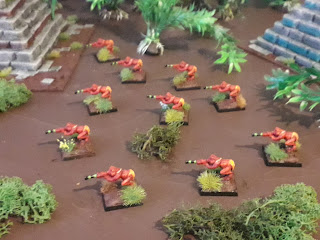 The second unit.
They have orange loin cloths, and green markings on their blowpipes. 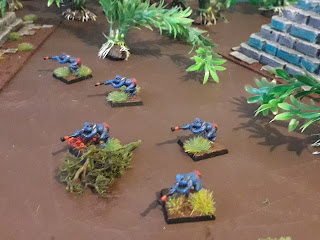 Scouts!
I wanted to keep these simple and to paint some Slann blue as per the physique description of Slann in the various editions rulebooks. 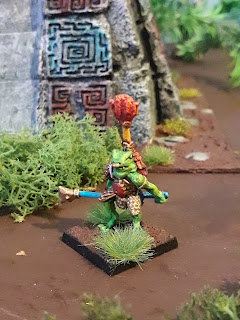 C32 Slann 'Pintamilkada'
I painted him just for the fun of it whilst I was painting the blowpipers.
Another comedy Slann name too!

The next blog update will probably be the Slann conversions as I wanted to show what I have been doing, and also I may be a little pushed for time in the next few weeks and might not be able to paint anything else. I'll see. :)
Posted by Goblin Lee at 18:15