A lot has been written on news feeds, blogs, and forums on the demise of White Dwarf and it's transformation into two formats, so I won't bore everyone with repeating it. Personally, I think it's a shame to see it go. However, as I have'nt bought a copy since the release of the Tomb Kings in 2010, and only bought about three copies on the last ten years, it gives you an idea that I have been less than impressed with it's content for sometime.
Will the new approach prove any good?  Just have to wait and see, but as we all know GW have a lot of other things to address than just tinkering with White Dwarf (a £30 Codex, really!).

Anyway, painting wise I have managed to get the five Squat Heavy Weapon Trikes finished this week, as well as a few other odds and ends. I only have two basic strength Brotherhoods to finish painting, and then onto the basing and varnishing.

After I have completed the Squats, I might finish off the oddments I have for my Ork Rogue Trader army, and then perhaps paint up a few Goblins as it's been a little while. 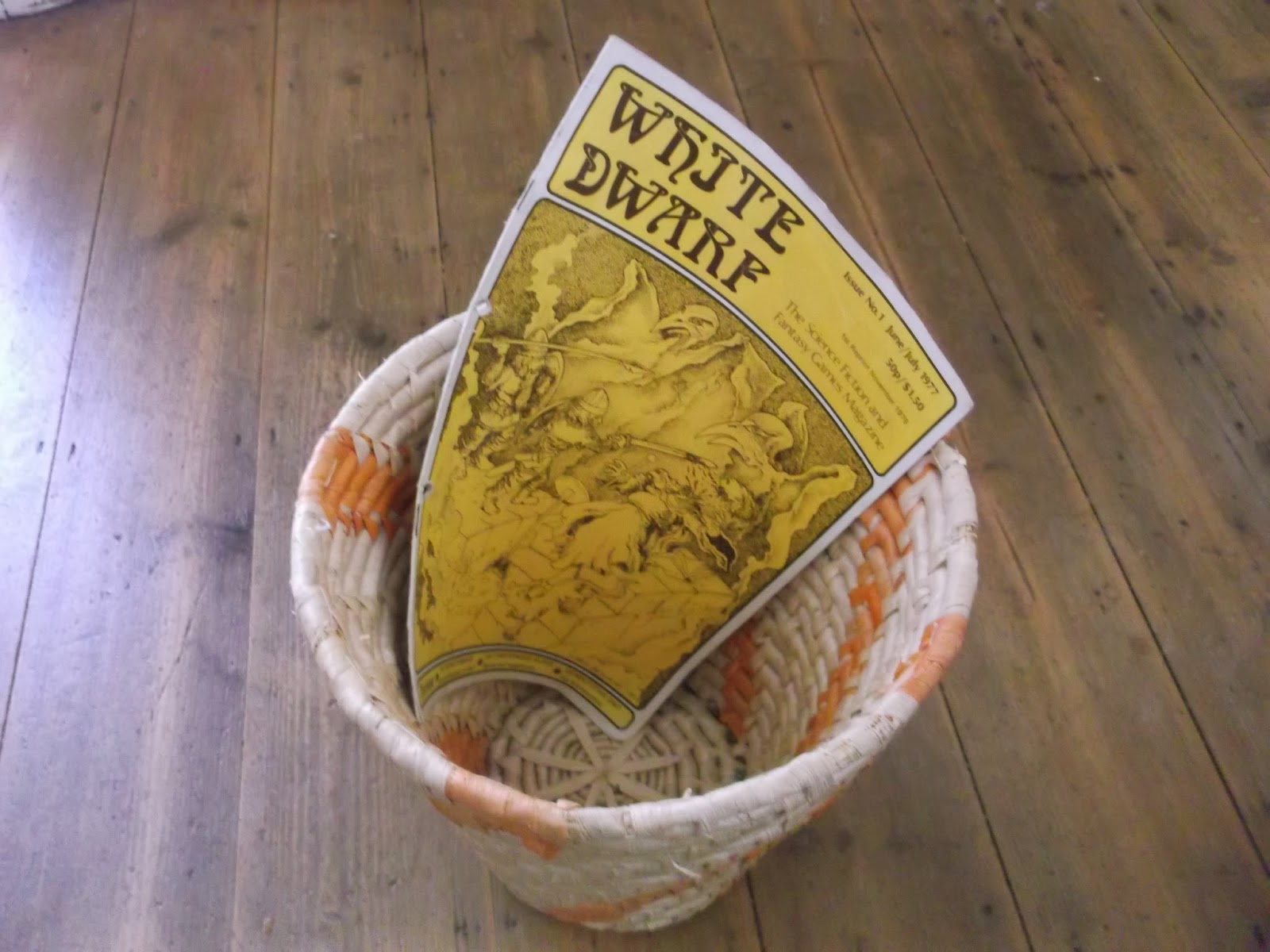 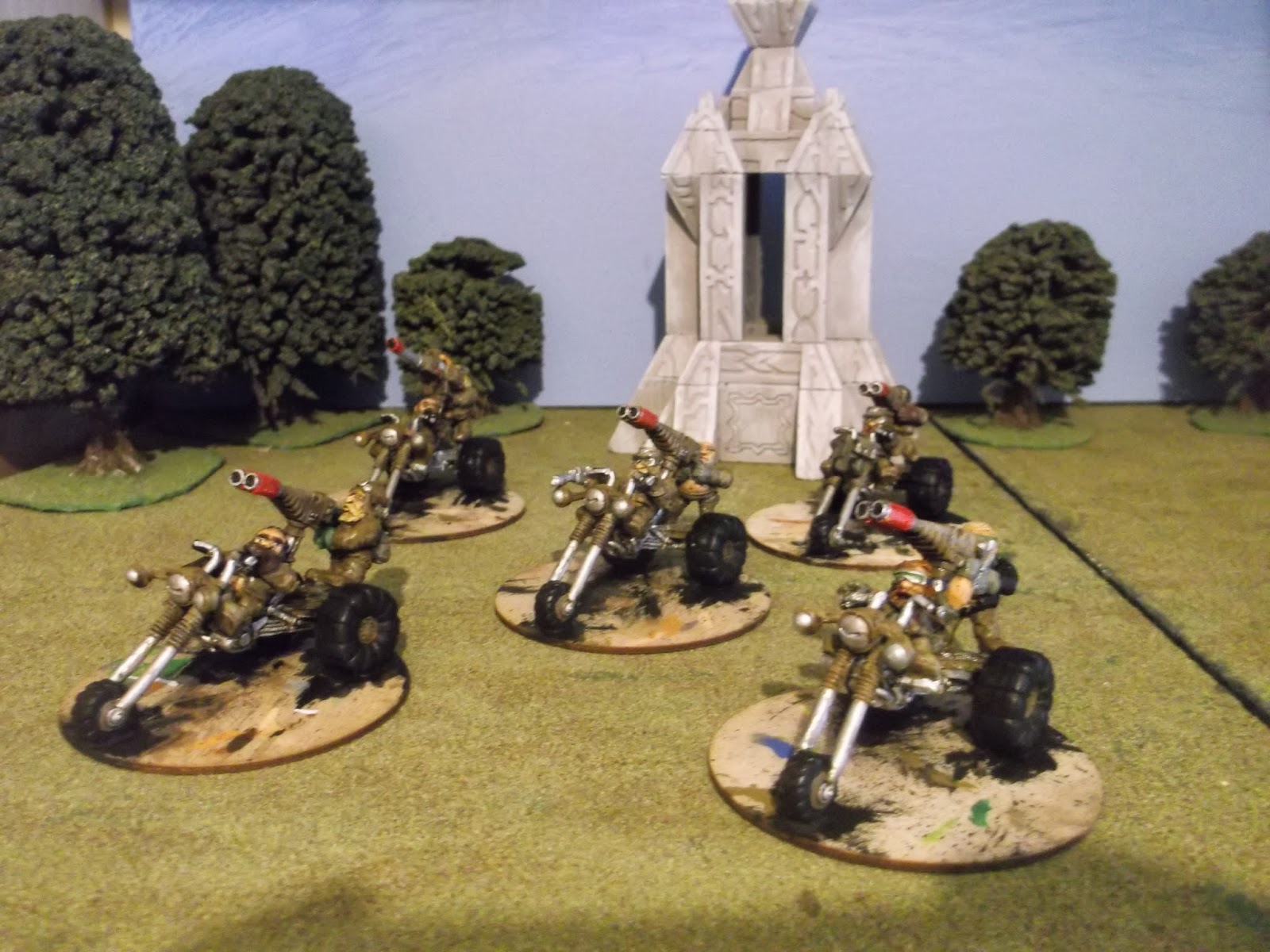 Five Heavy Weapon Trikes.
Like the Bikers, I have kept the paint scheme linked in with the rest of the army, but used a little more lee-way on some of the details. 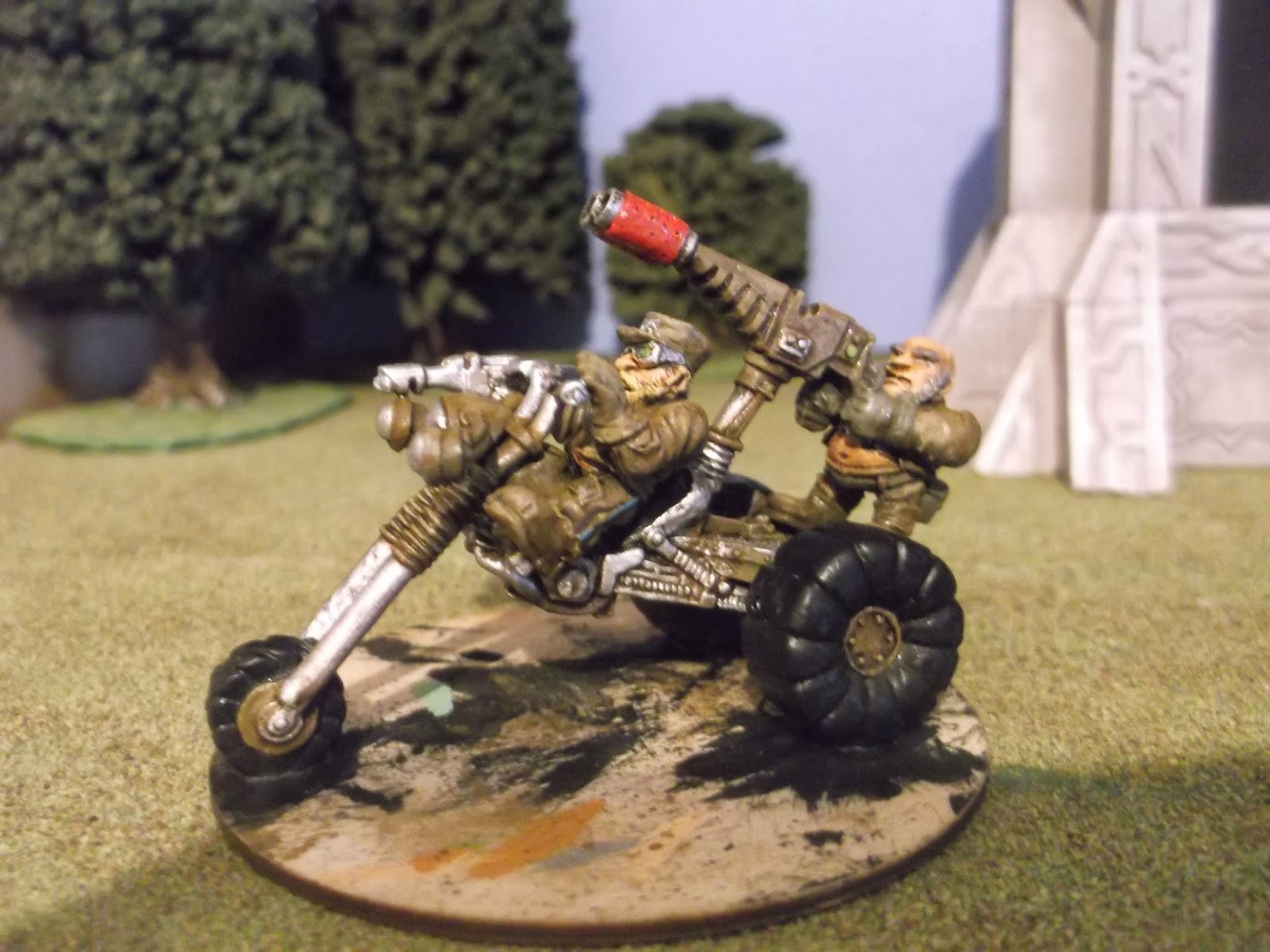 First Trike, with a fat little biker on the heavy weapon.
As all but one of these drivers are the seperate arm version, I converted the left arms designed to hold guns by cutting off the hand, and re-attaching it at 180 degrees to rest on the handlebars. 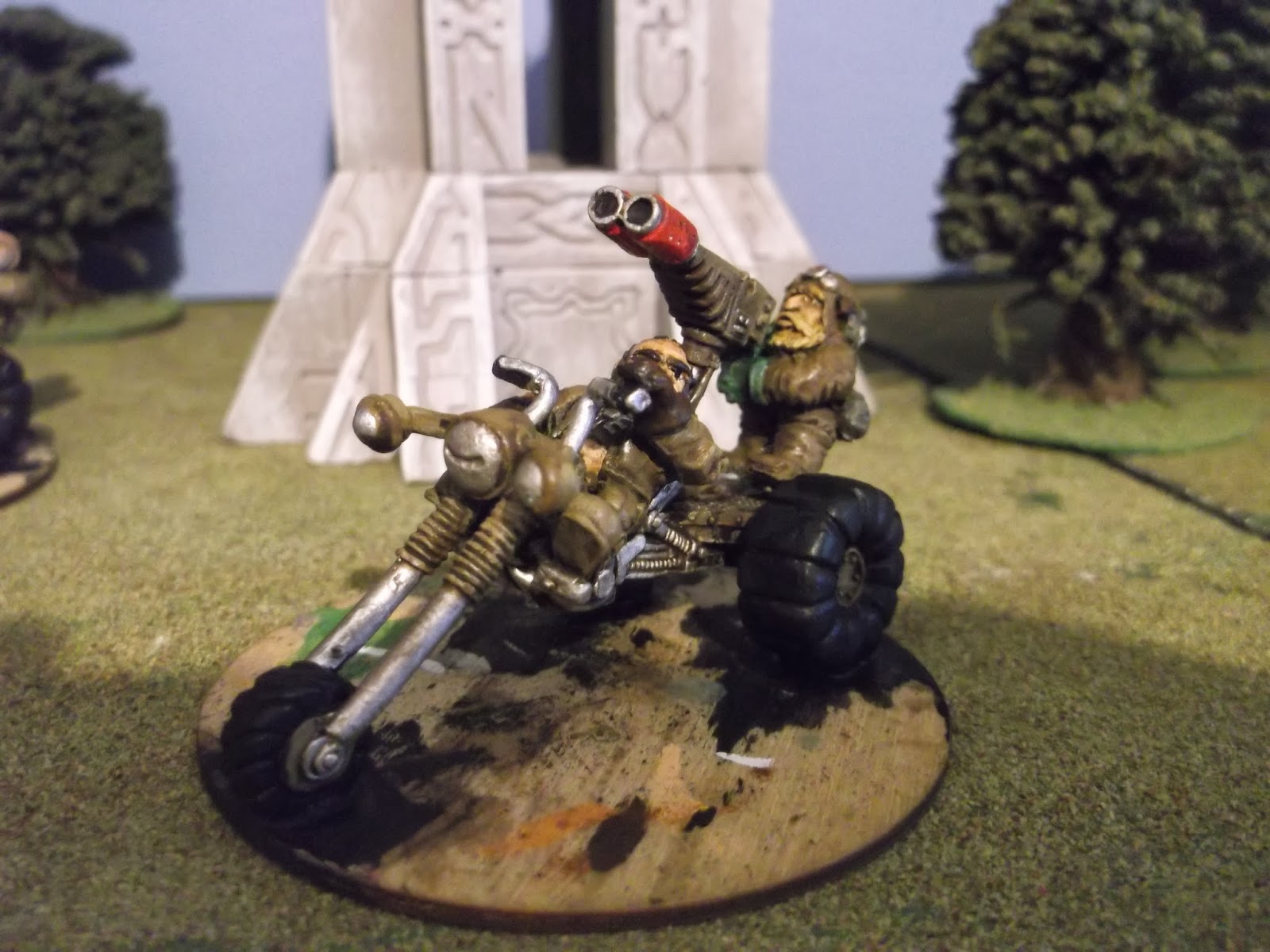 Second Trike, with a Squat adventurer on the back. 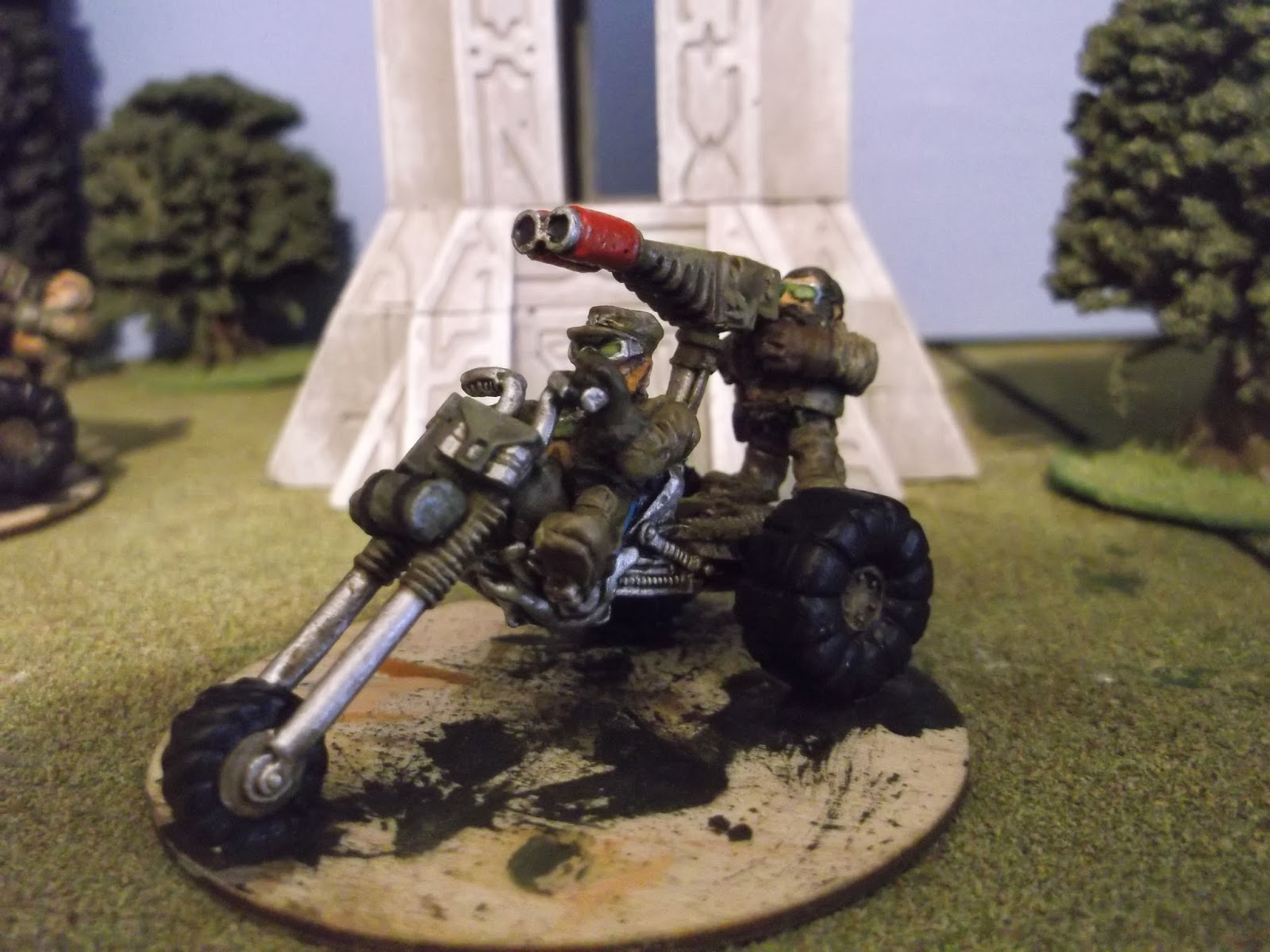 Third Trike.
I lost the headlamps to this model, so just I just bulked up the front with a couple of equipment packs from, RTB101 Space Marine box set and a blanket roll from an old Tamiya kit. 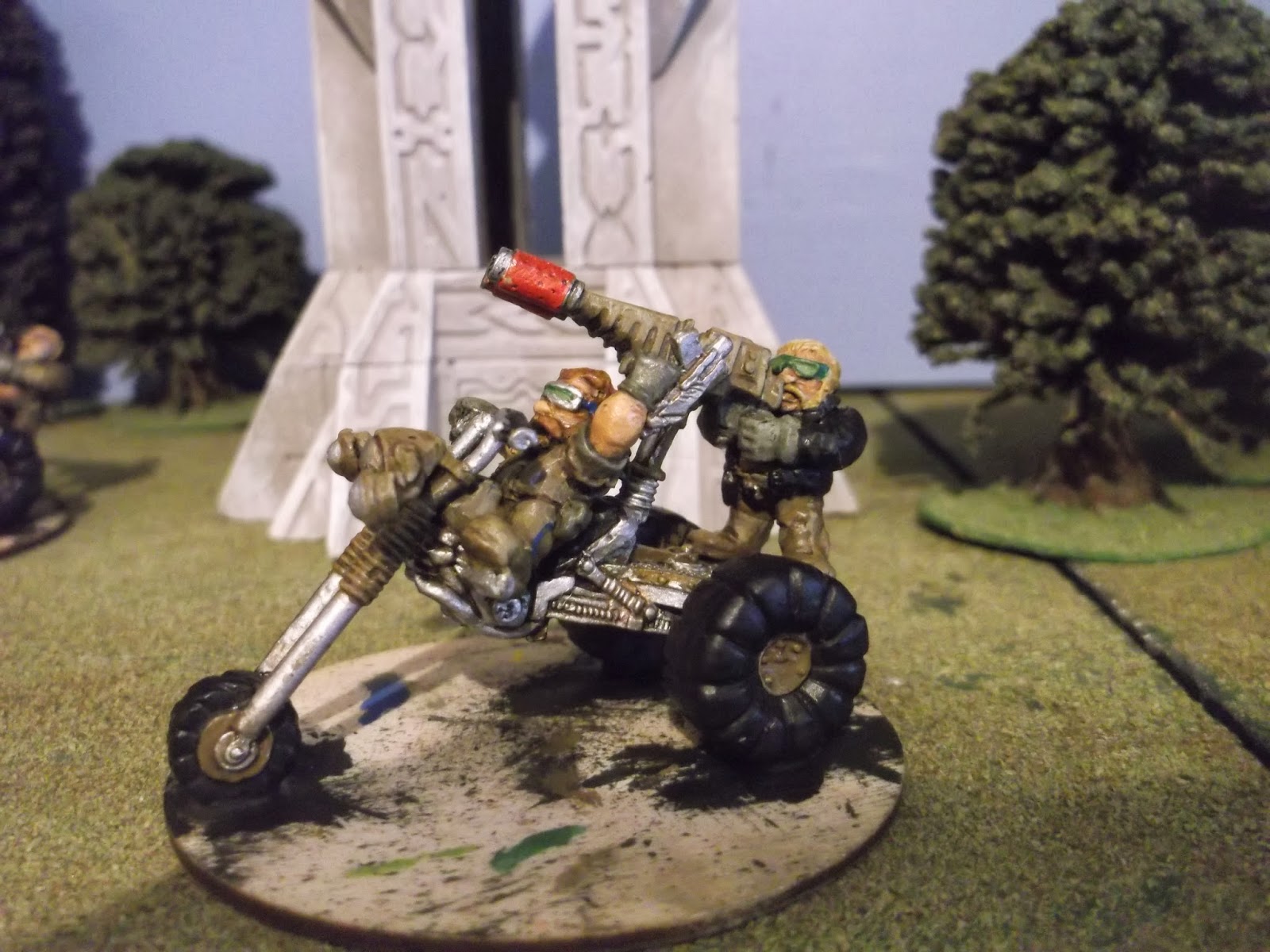 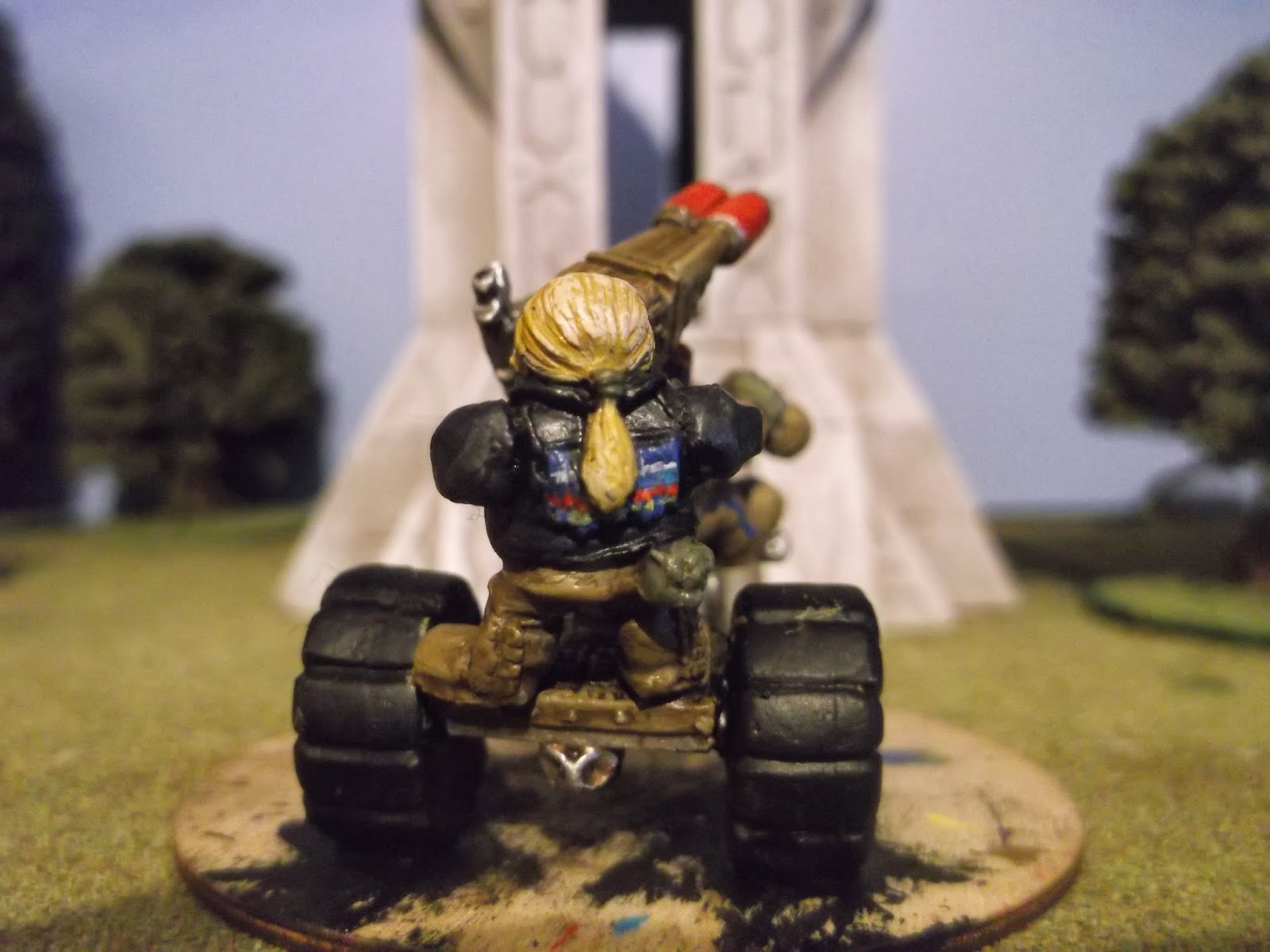 Back view of the jacket.
The back of the jacket has fronds on it, so I painted them up to look like Native American beadwork and give this Trike a South Western USA biker feel. 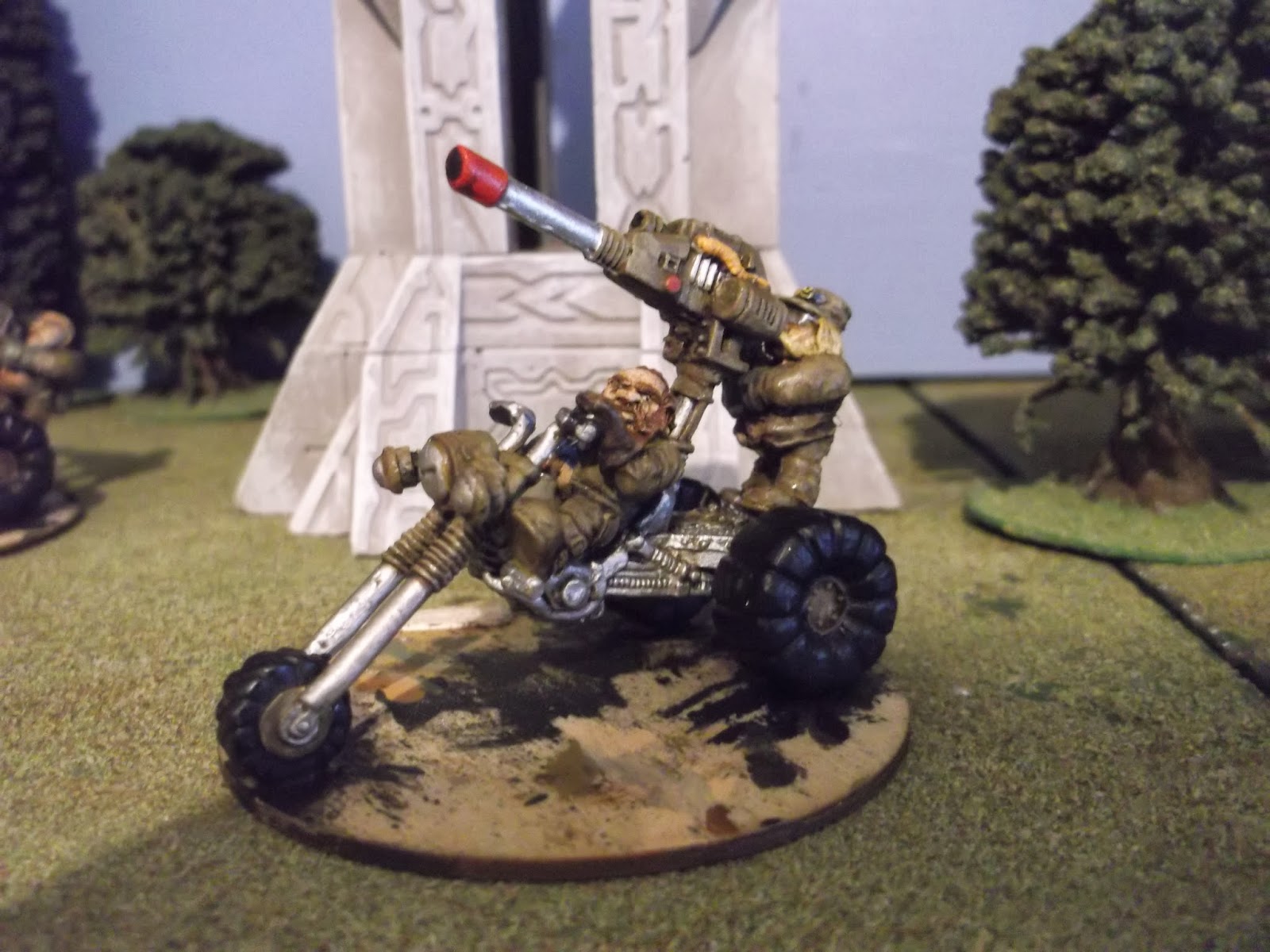 Fifth and final Trike.
I converted this Trike to carry a las-cannon using a spare las-cannon mount from the Rogue Trader Ork Wartrak. 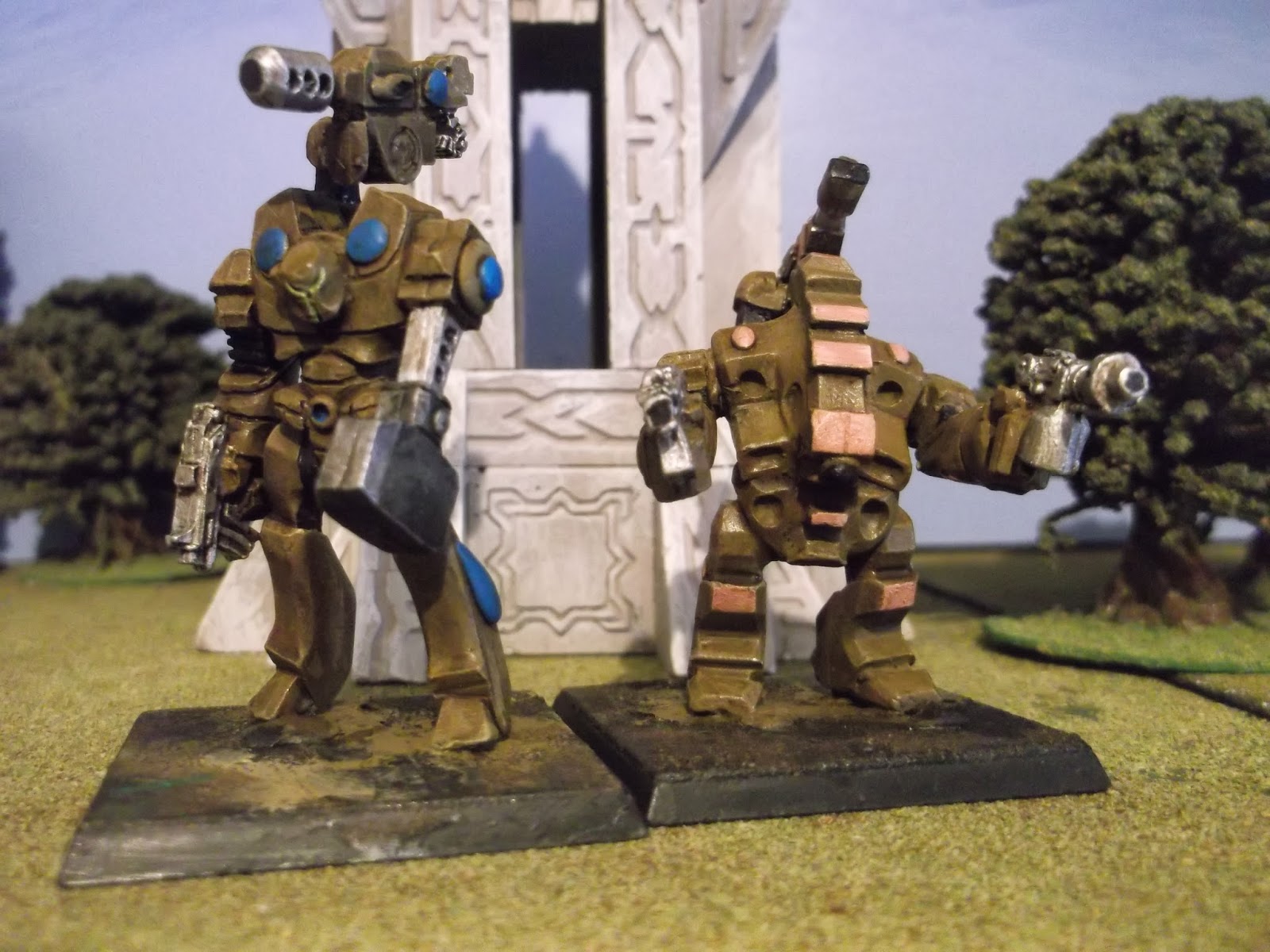 Robots.
For every Guildmaster in the force you can have a Mantiple of Robots. They are usually of the same type, so I painted up both of them.
On the left is a Colossus, on the right is the Cataphract.
I might go back and paint more markings on them as they look a little plain. The Colossus has the 'Brighthelmstone' colours on it. The Cataphract is pink due to the history of this particular model. I painted it up in about 1989, and it was meant to be red, but messed up the paint scheme and it turned out pink! I left the colour as it was a bit of a humorous jokey thing at the time. So when I paint stripped it and re-painted it I added pink as a nod to it's orginal pinkness. :) 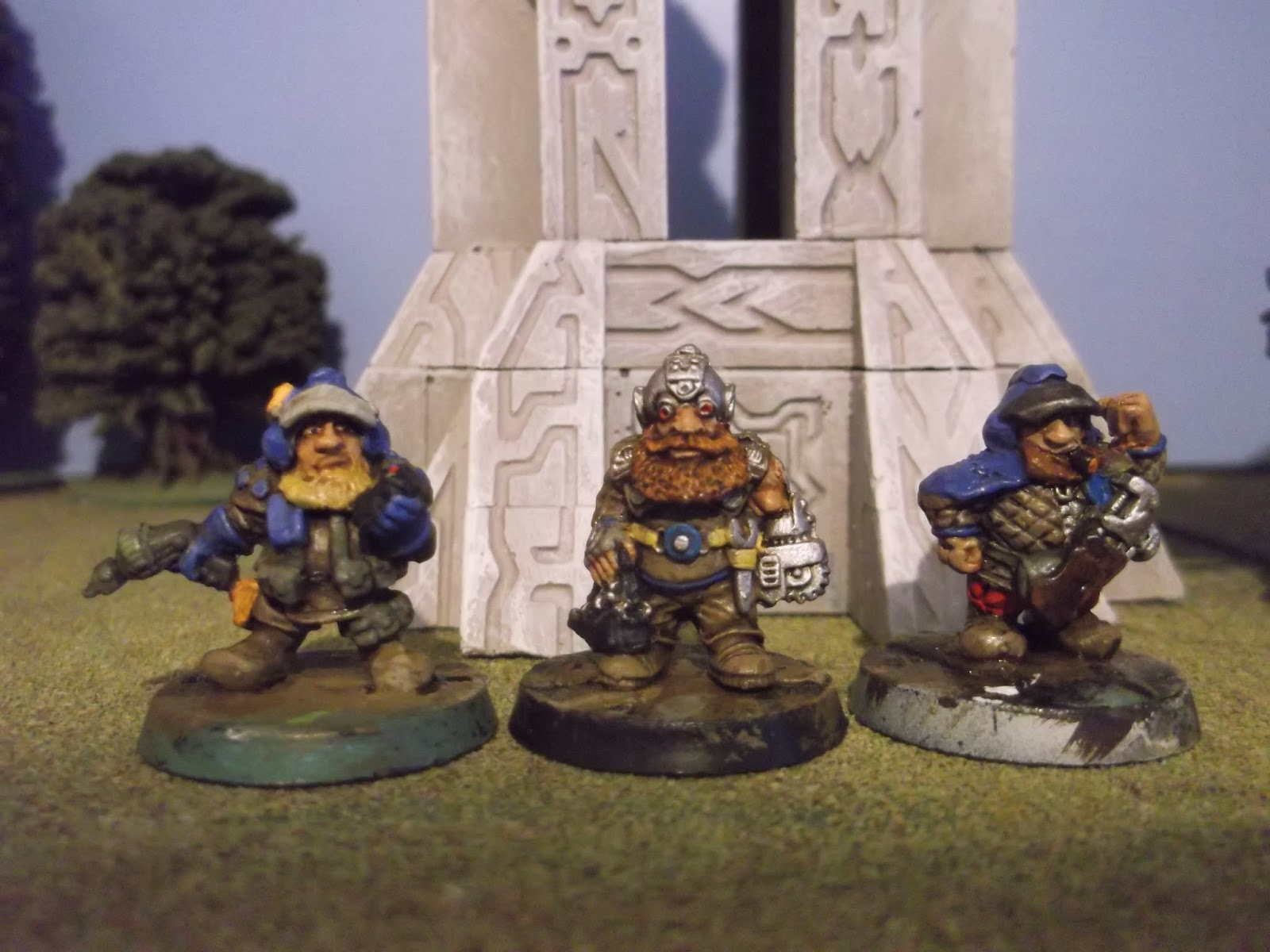 The Support Weapon Crews for the Tarantulas below.
From the left, another use the of 'Blish' Browning miniature as a crewman, centre is the Iron Claw Servitor, and on the right a spare Thudd Gun crewman. 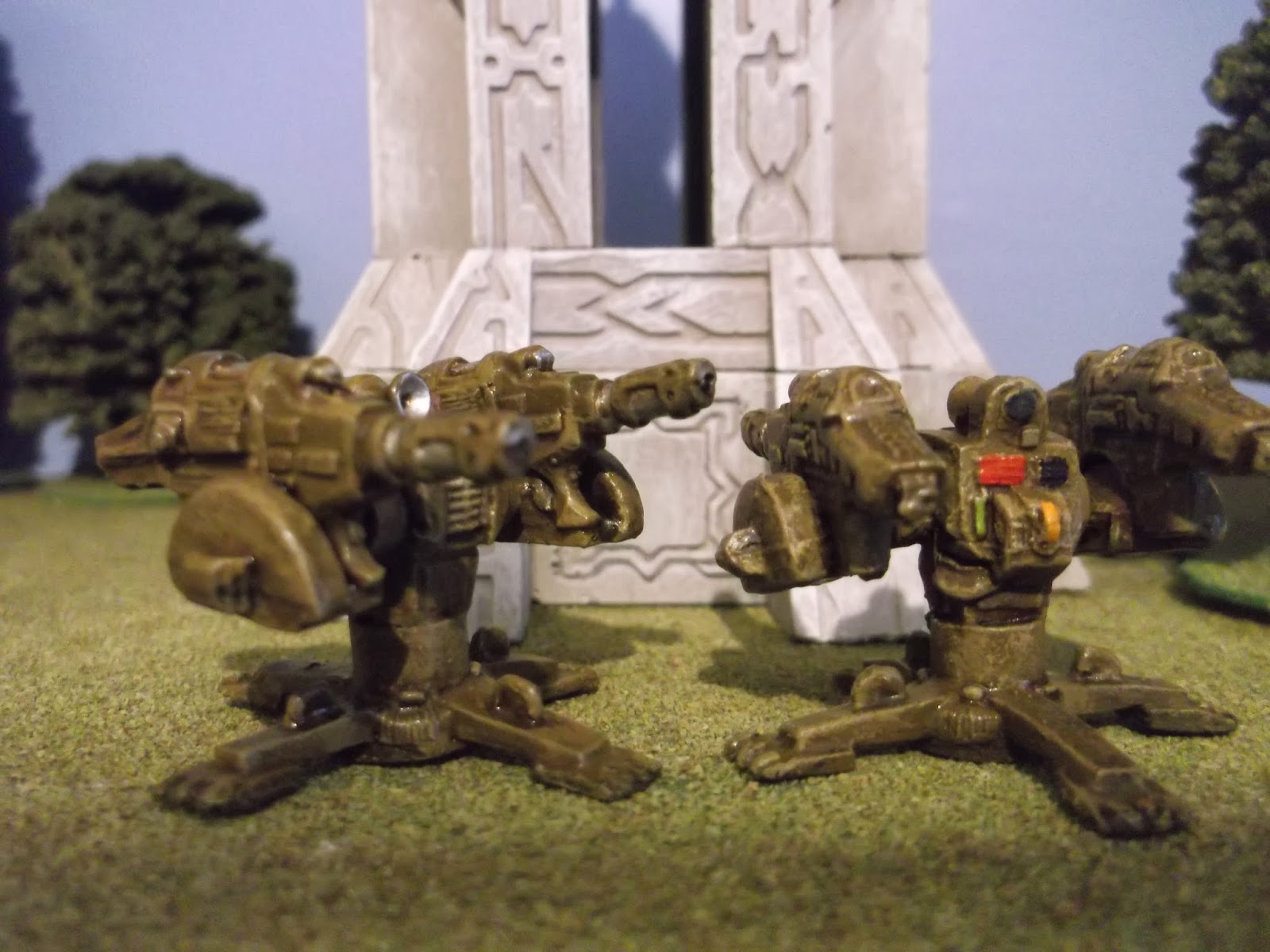 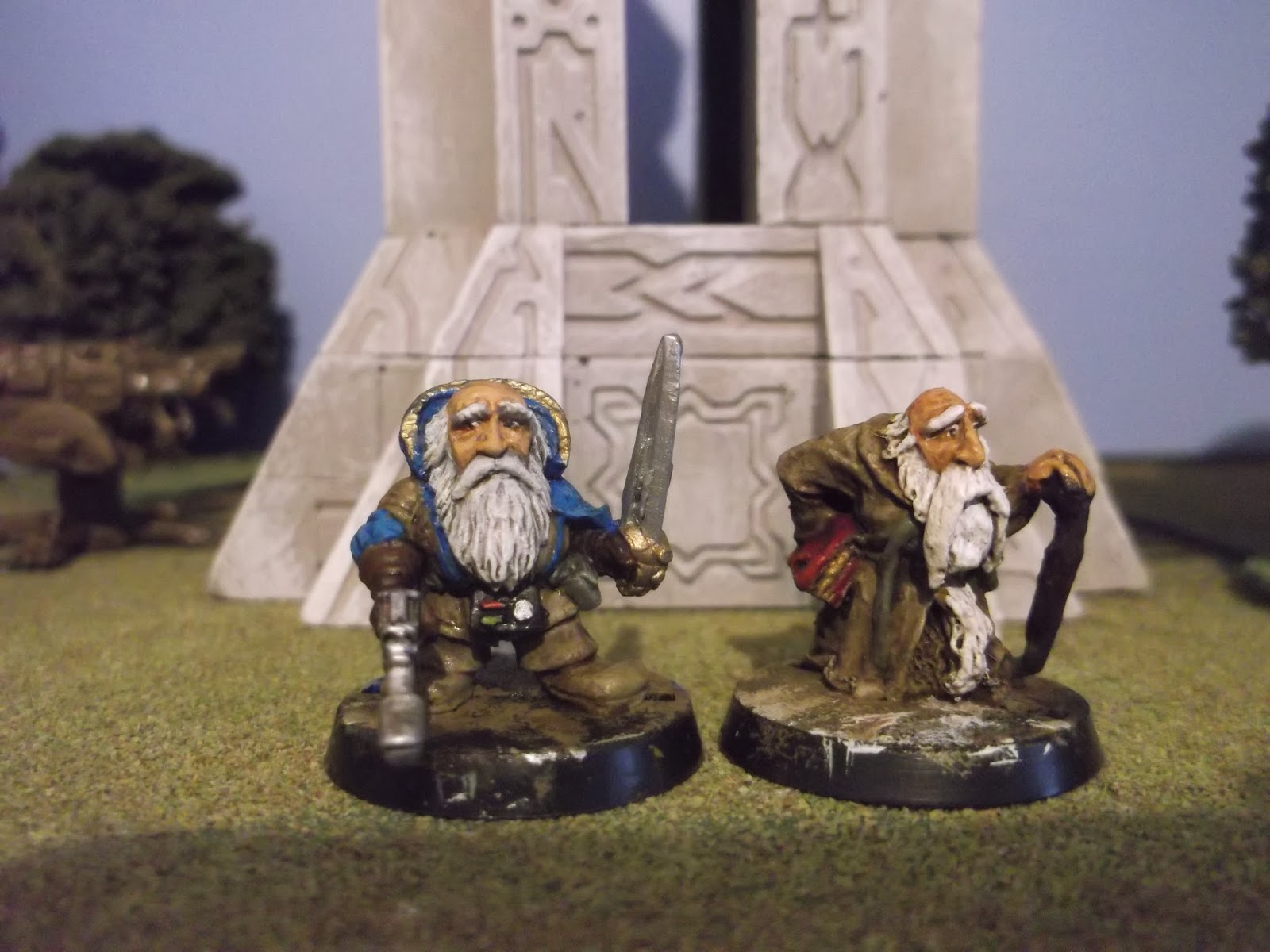 Living Ancestors.
On the left is one of the Perry Twin ones from the 1989 range.
On the right is an old Fantasy Dwarf miniature from the F4 Villagers range (I think his 'name' was 'Elder'). 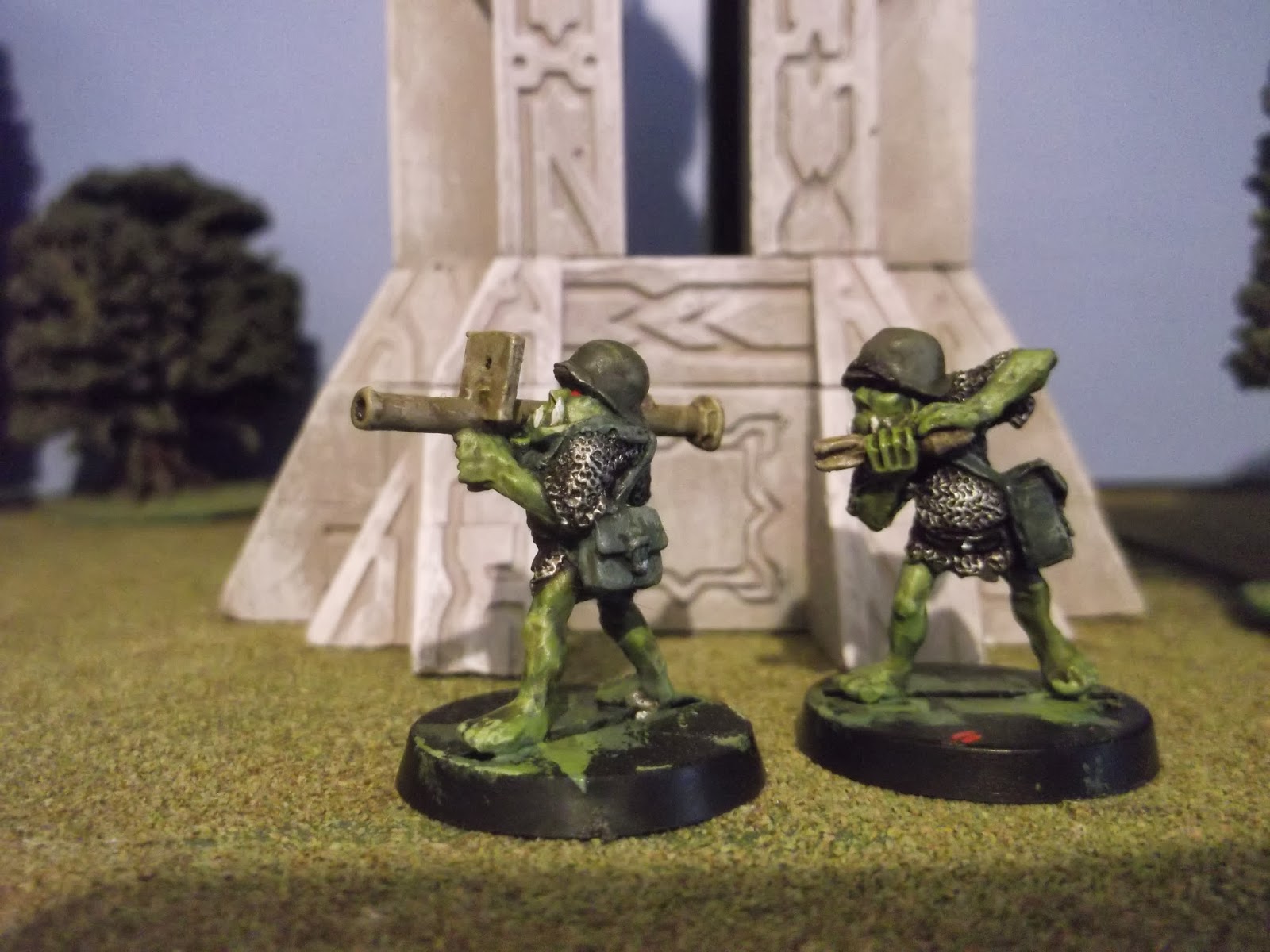 LE22 Orc Bazooka Crew.
I was sorting through boxes of stuff and found these two. As a break from Squats I painted them up for the fun of it, and as a free-standing team for my Ork army. 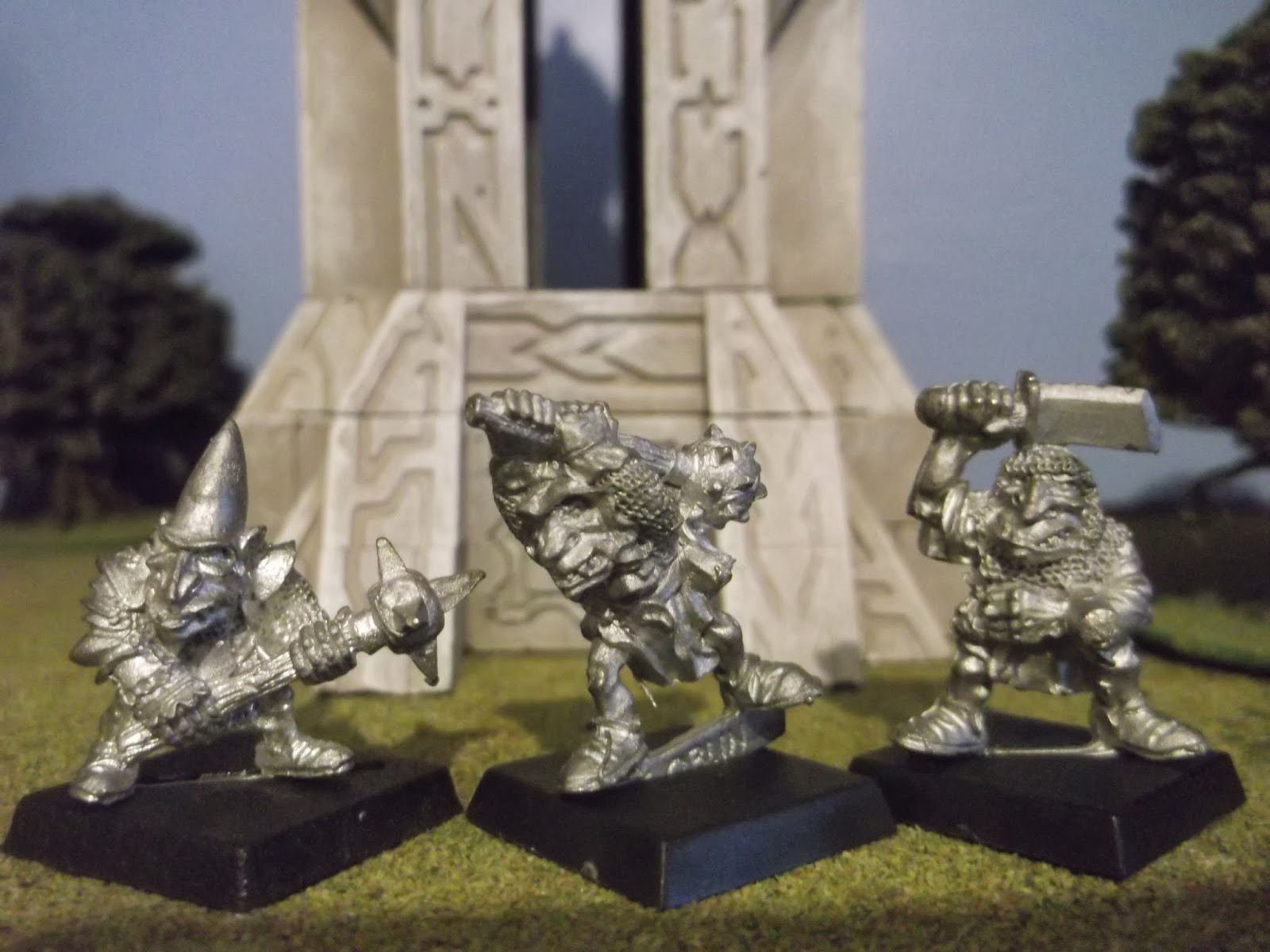 Iron Claw Goblins!
I managed to bag a few Iron Goblins on e-bay that I did'nt have! :)
I want to get around to painting up a few Goblins before I embark on my next project, and I also plan to do a couple of  updates on just the Iron Goblins at some point, probably in Febuary. 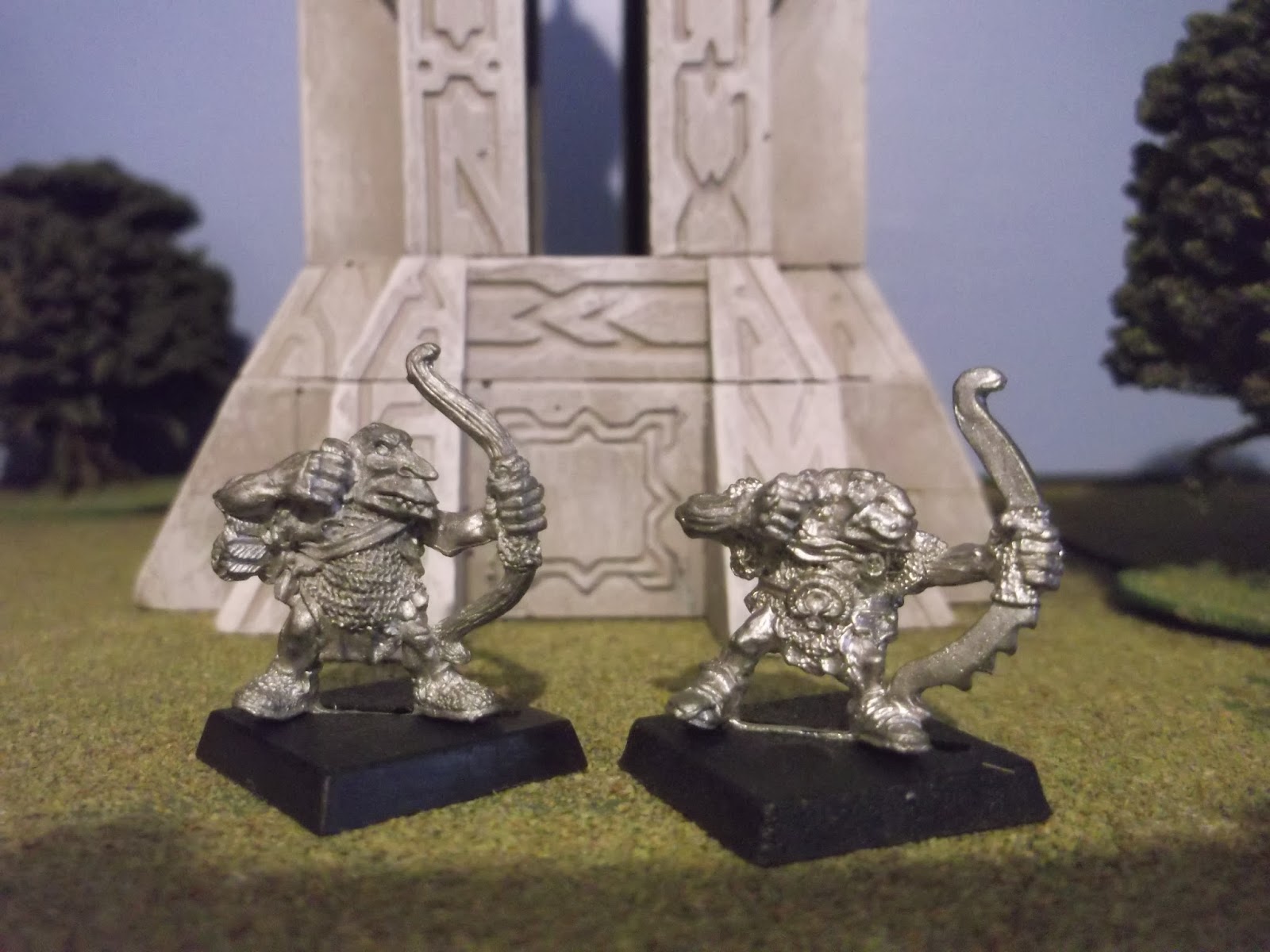 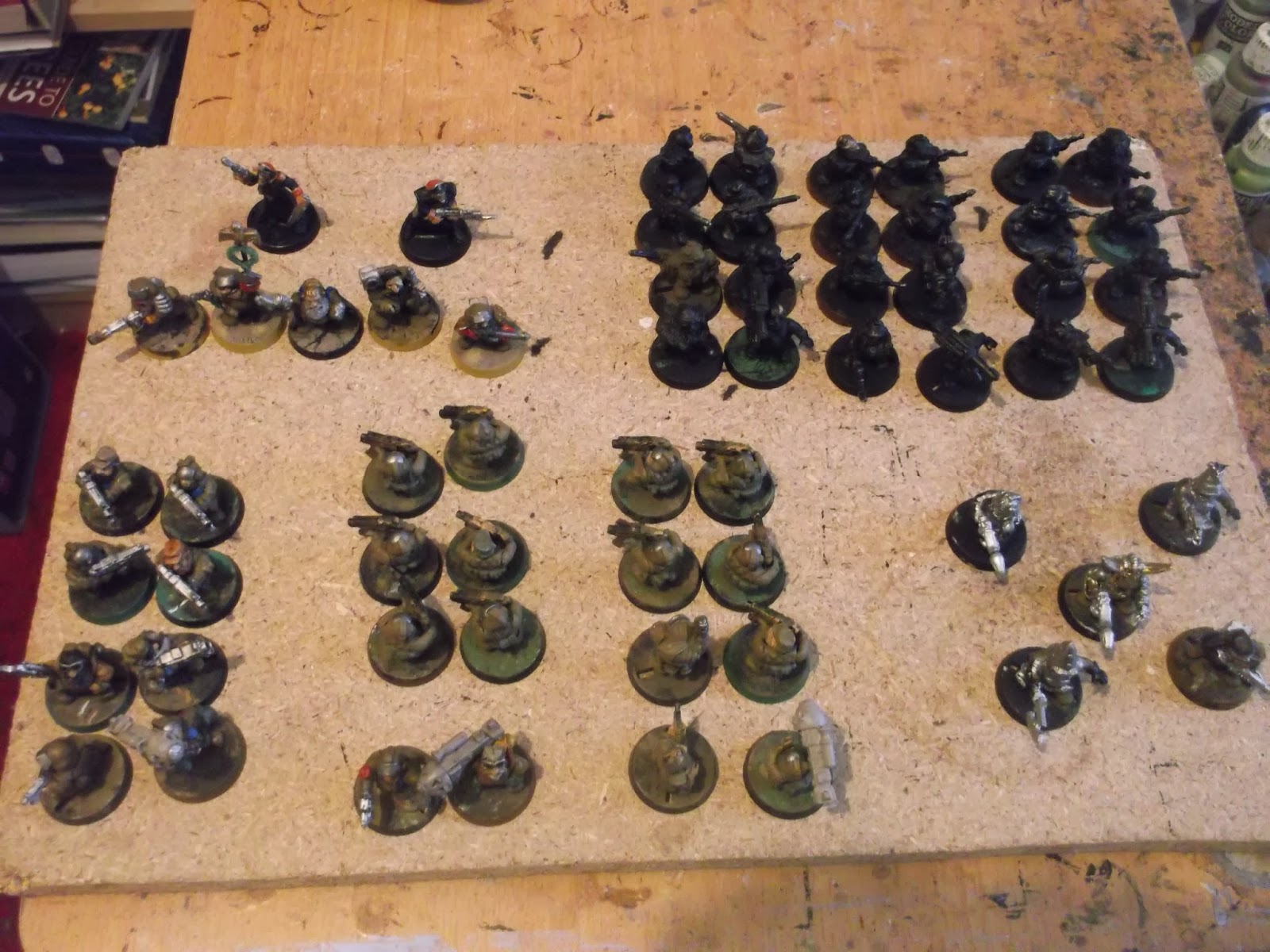 What's left to do for the Squats.
The two Brotherhoods, and a couple of Commisars.

Next update will again be on the continuing painting of the Squats, and any random stuff I might find and paint up.   :)
Posted by Goblin Lee at 14:48