I've had a busy time painting over Xmas.

Since I changed the Squat army paint scheme on boxing day I have painted three complete Brotherhoods, each consisting of one Warlord and Hearthguard, and three Combat Squads. I still need to varnish and base them, but I have made a good start to the army and the years painting. In additon I managed to get both Mole Mortars done, repainted the thudd gun, painted up the Adeptus Mechanicus, and painted an old Ground Zero Games APC as a proxy Rhino. I still have a lot left to do though.
I also managed to buy a Living Ancestor on e-bay, the one with the Sword  :) .

Once I have painted the entire army I will do a much more in-depth Blog update with more detailed photographs. The army is still very WIP.

Well although I don't usually bother too much with background for armies,  I thought I needed a theme and background for the Squat Army. As traditonal Rogue Trader era Squat Armies are generally Stronghold based I thought I would base the background around a Stronghold. I had started to painting the Squats up in Valieljo English Uniform so wondered if I should give them an English feel, but I needed a name for the Stronghold. It then occured to me that as I live in Brighton and Hove, why not give them the old name for Brighton: Brighthelmstone?  It sounds suitable for a stronghold name.

Bit of local history,  Brighthelmstone was the old Saxon name for Brighton from the time when Sussex was founded as an independent Kingdom (late 5th Century) until 1820's when it had already become know more commonly as Brighton.
In 1997, Brighton and the ajoining town of Hove (where I live, actually) merged together, and in 2000 we were granted City status and a new combined coat of Arms by the Queen. So I decided to paint the army badges and oddments with the same Azure colour used in the Coat of Arms, although I drew the line at painting Dolphins on things!
By the way,  Inter undas et colles floremus' translates into 'Between downs and sea we flourish', although as we have a nearby valley up the on the South Downs known as the Devils Dyke, I like to think of it more as being between the Devil and the deep blue sea! A very suitable Motto for the Squats, especally with Games Workshop releasing more Tyranids into the wild this month. :) 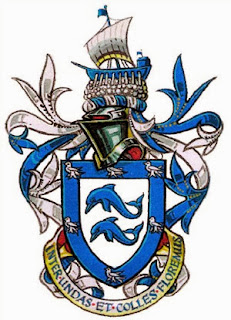 Brighton and Hove's Coat of Arms, made from combining the Brighton's and Hove's old ones.

Anyway, why does this matter to the Squats?
The start of the background I have come up with is that long ago during the Dark Age of Technology/The Squat Age of Founding, a small group of intrepid explorers and colonisers left the south what was to become the Pre-Unity state of Albyon and headed out to found a colony. Naturally drawn to hilly areas by the sea, they settled in hill country, burrowed into the local Downland, and named it Brighthelmstone, after the ancient name of thier original home. They chose an vintage uniform colour and the blue Azure of thier crest as part of their identity.

I'll write up more later, and might even have a go at painting the crest on a couple of vehicles.

Anyway, enough of local history, on to the painted stuff! 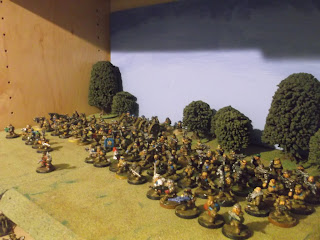 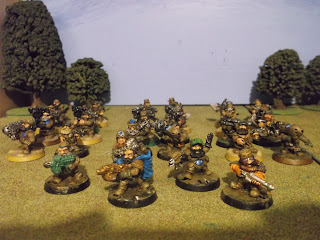 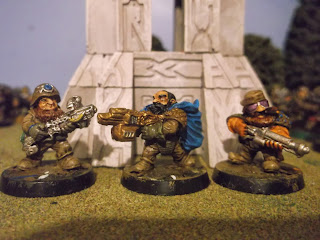 3 Iron Claw Squats, with the centre one being used as a Warlord.
I must admit that I have never been a fan of the Iron Claw Squats, but now I am painting them up I am begining to like them more. They are useful for using as Warlords and Hearthguard as they are both characterful, and the weapons they have can pass for a lot more of the exotic equipment they might roll up on the weapons/equipment charts. 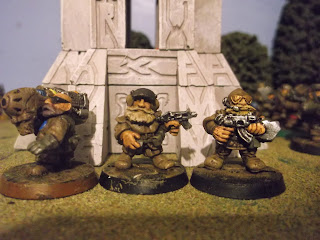 Troopers.
I have painted them using Valiejo English uniform, which I highlighted with the same and a little white.
The belts and pouches are painted with Valiejo Brown Violet, and highlighted again with that and white. The whole model was then given a wash of Citadel Agrax Earthshade.
Where possible I have added odd differences, such as different coloured gloves/pads/armour/random equipment, to break up the block of colour. 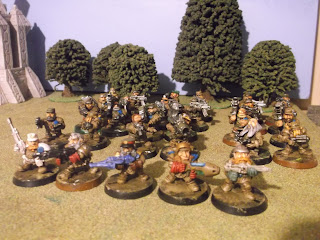 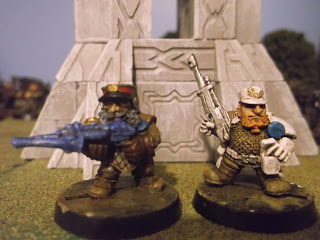 On the left an Iron Claw miniature with a Shuriken Catapult eing used as a Warlord. To keep with the nod to an English theme I have him a British Army looking Officers cap. Might call him Melchet.
On the right is the one of the Squat Medic miniatures which I am using as a Hearthguard. I always liked this miniature. 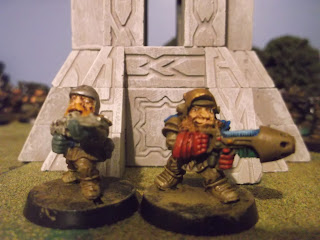 Two more Iron Claw Squats as Hearthguard, on the left a Needle gun, on the right a Plasma Gun. 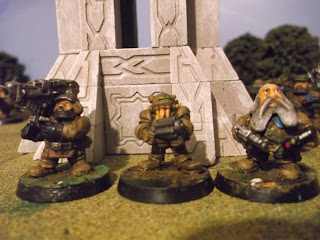 Left to right, plastic Heavy Bolter, metal Grenade Launcher, and the right is a plastic squat with a plastic Dwarf head from the Drastik Plastik Dwarf set. 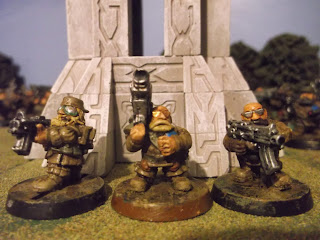 Three more troopers, a metal one on the left, the other plastic.
I love the head with shades, and the one on the right shows how I added the RTB101 Bolter on. All but one of the Five Brotherhoods have the Bolt Gun upgrade, adding that extra punch for 3.5 point per squad. 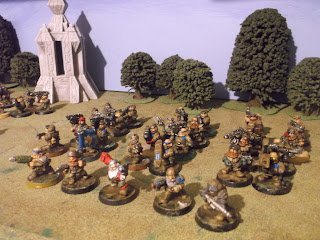 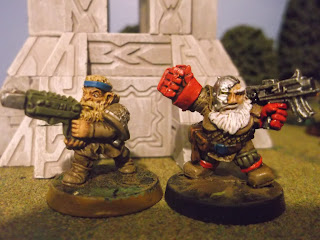 Another Iron Claw Squat Hearthguard on the left, and a Warlord on the right from the Command Group range, named Vikas Ingram. It was only after I painted him that I realised he looked a little like a heavily  armed Father Christmas! LOL 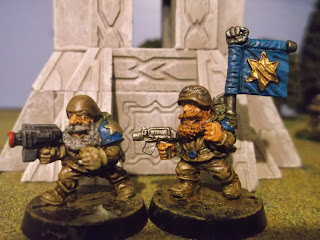 Two more Iron Claw Squats. The gun on the left looked a little like the Web Gun/pistol from the rulebook, so I painted it up differently from the normal Bolt Pistols. 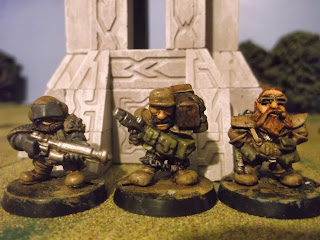 Three metal Squats sculpted by the Perry Twins.
On the left, and used as a Hearthguard with Flamer is Waltha Twelvebore; centre is Laoder Grigg, and left is Capt. Khyrk. Both are used as normal Troopers.
I always liked the joke/funny names that the Perry's Squats had. 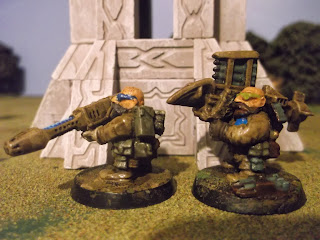 Heavy Weapon conversions.
On the left is a Heavy Plasma gun made using an old broken Titan Weapon from Adeptus Titanicus. He replaced the heavy Plasma gun conversion I had previuosly done using an Ork gun, as it did'nt look that good. I added RTB101 Space Marine pouches to his back to bulk him out.
On the right is another plastic miniature converted to hold another RTB101 item, a Missile Launcher. 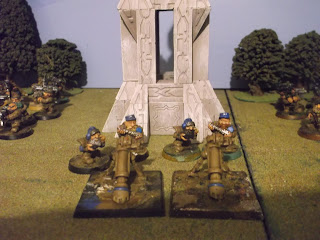 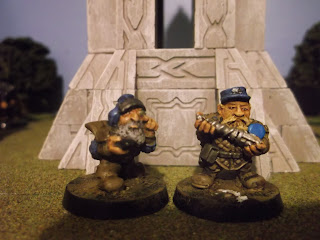 Close up of the Crew.
I have given the crew members Royal Artillery coloured helmets and caps to tell them apart from the Troopers, and to add a different blue (Ultramarine Blue) other than Azure. 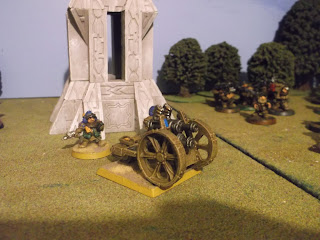 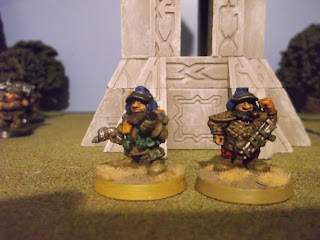 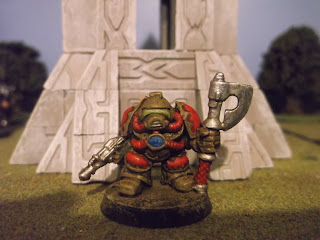 Squat Adeptus Mechanicus.
I really like this miniature, and only got him recently from e-bay.
I the game they are useful for repairing things, but I primarly wanted one to paint up and to have as part of the background.
I decided that painting his armour red all over, as is the style for the Adeptus Mechanicus would jar too much with the rest of the army. So I decided to just do the pipes, shoulder, and knee pads, as well as have the Brighthelmstone Azure blue on the chest centre. 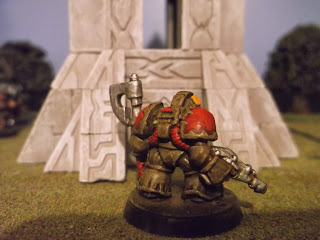 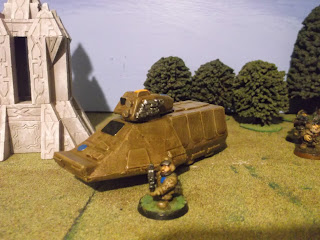 Ground Zero Games APC.
I bought this back in the 1990's and have had it laying around since then, so thuoght I would use it as a Rhino proxy, a locally produced APC. I modified it by adding two Bolters on the side, and might paint more details on it. I'm not very impressed with it, it was a poor quality casting (I don't know if GZG are better now) but thought I might as well use it for something. 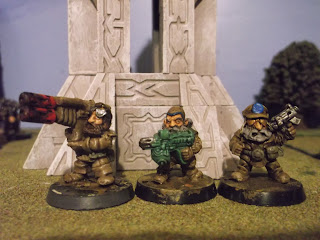 Three random Squats. Gunner Kief on the left with a Multi Melta, centre an Iron Claw Squat with a Melta gun which I use as a Hearthguard, and right another Bob Olley Squat, this time used as a Squad Leader. 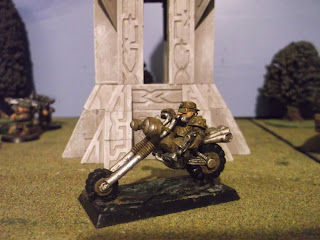 Biker!
I painted up a test model to see how the bikers will look.
Still WIP. I wanted to avoid making them a 'biker' add-on to the army, but have them look like an intergral part. So I have decided to paint them in the same scheme as the rest of the army, although they will get more individualist detailing.

I still have lots of Squats to paint, so will be carrying on with them. I am taking a break from the footsloggers and turning my attention to the bikers. I have two Squads of 8 bikers to do, 5 Heavy Weapon Trikes, and a Guildmaster on a jetcycle.  :)