Those of you who follow my Blog will notice that I did'nt get around to updating the Blog as usual this Sunday. This is because I was helping a friend move house over the weekend and yesterday.

Before the house moving activies, I had managed to do a lot of painting. I am still working my way through the Squat army, I managed to complete a further 5 Combats Squads, 40 Squats in all.  :)
I have nearly finished the army, which I think is pretty good going since I only started painting in December. I have one more Combat Squad, two Warlords with Hearthguards, two Commisar advisors, and two Bombots left to do. And of course the varnishing and basing to do as well, which will probably take a week in itself.
Enjoy :) 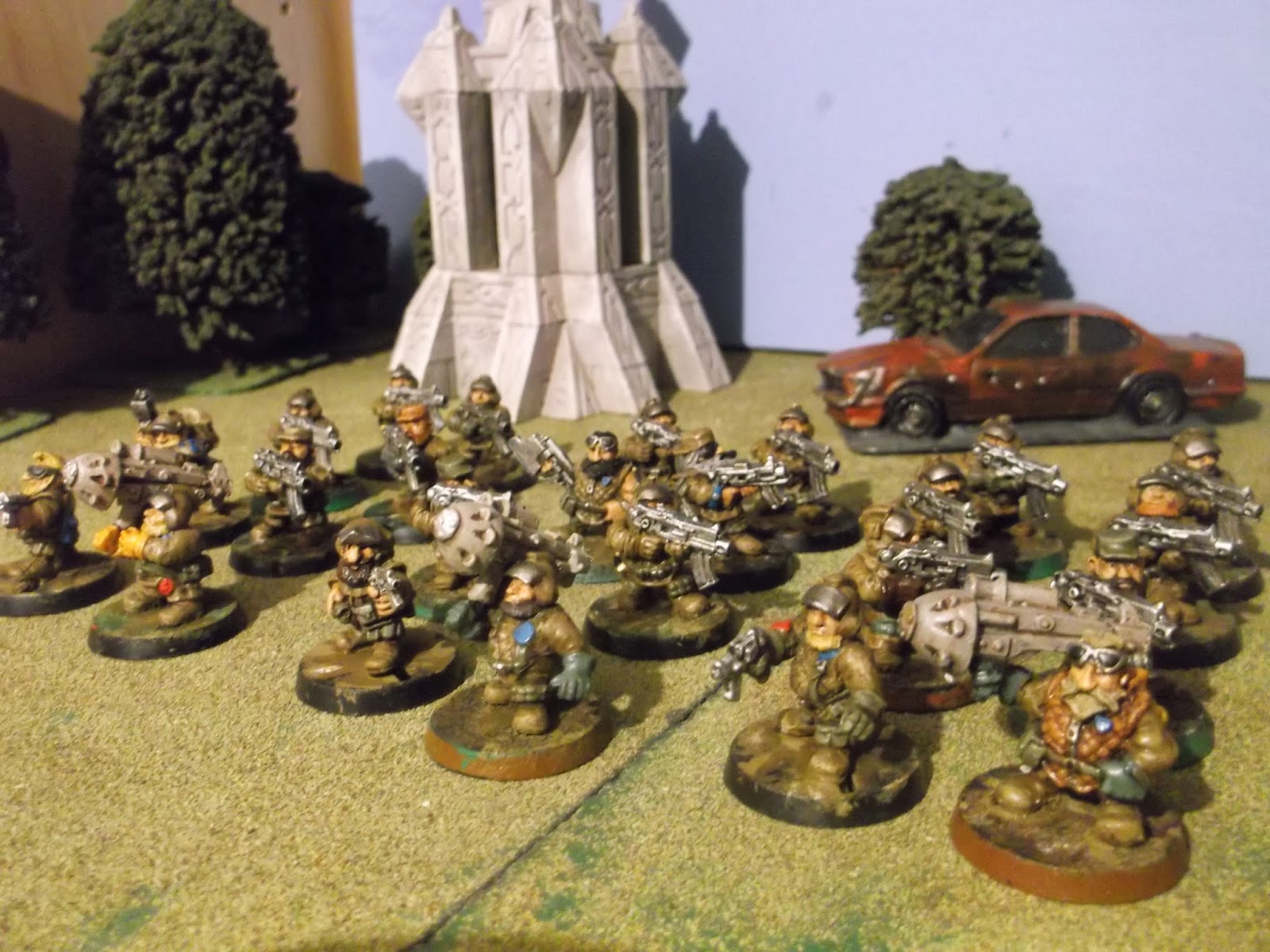 Brotherhood Four's Combat Squads.
Each Squad is equipped with one Conversion Beamer, Bolt guns, and the Squad Leader has a Bolt Pistol. 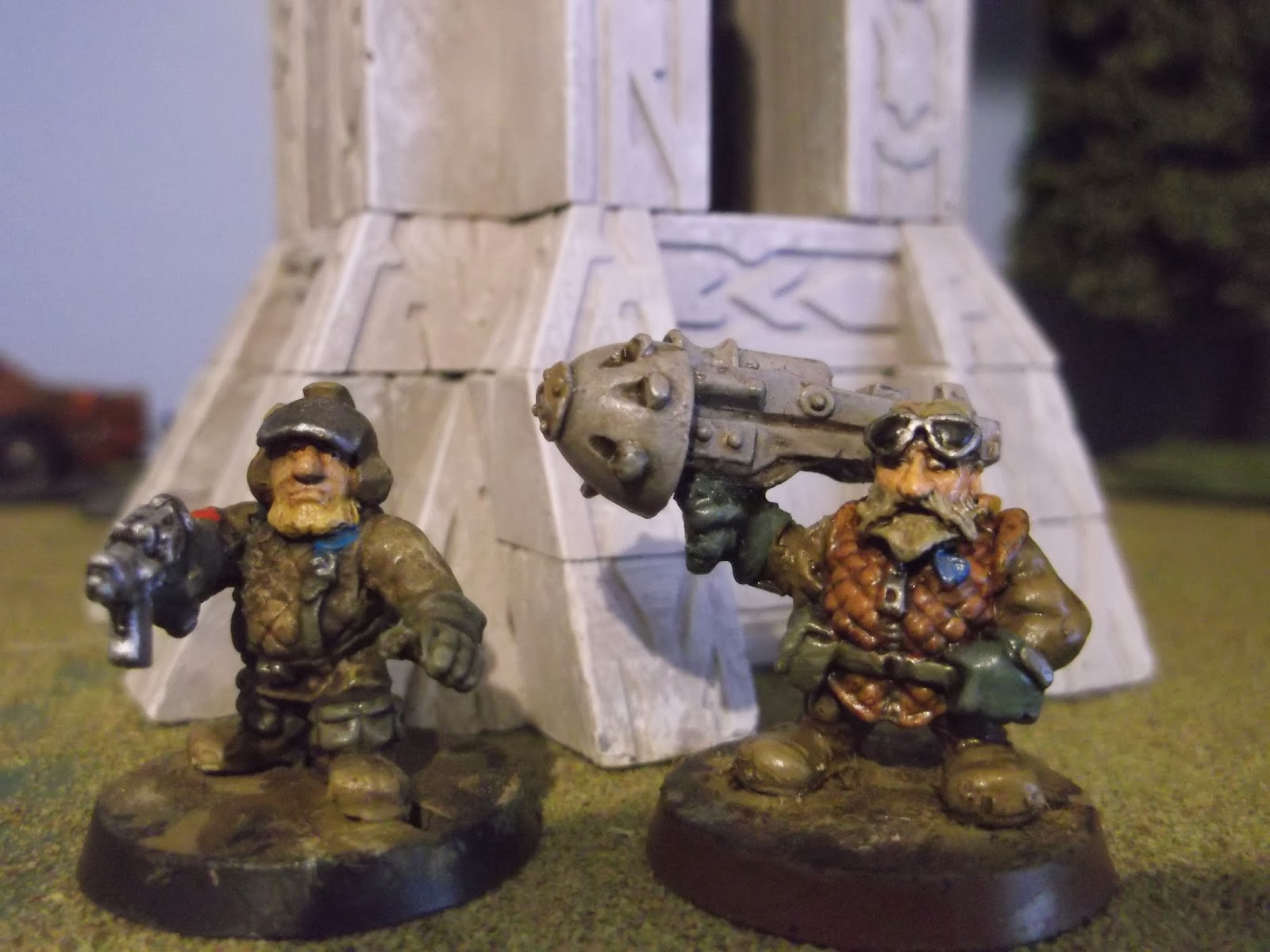 A metal Squad Leader on the left.
On the right is a converted broken 'Colt Stoner' miniature, using a plastic Squat arm and metal Imperial Guard/Space Marine Conversion Beamer. 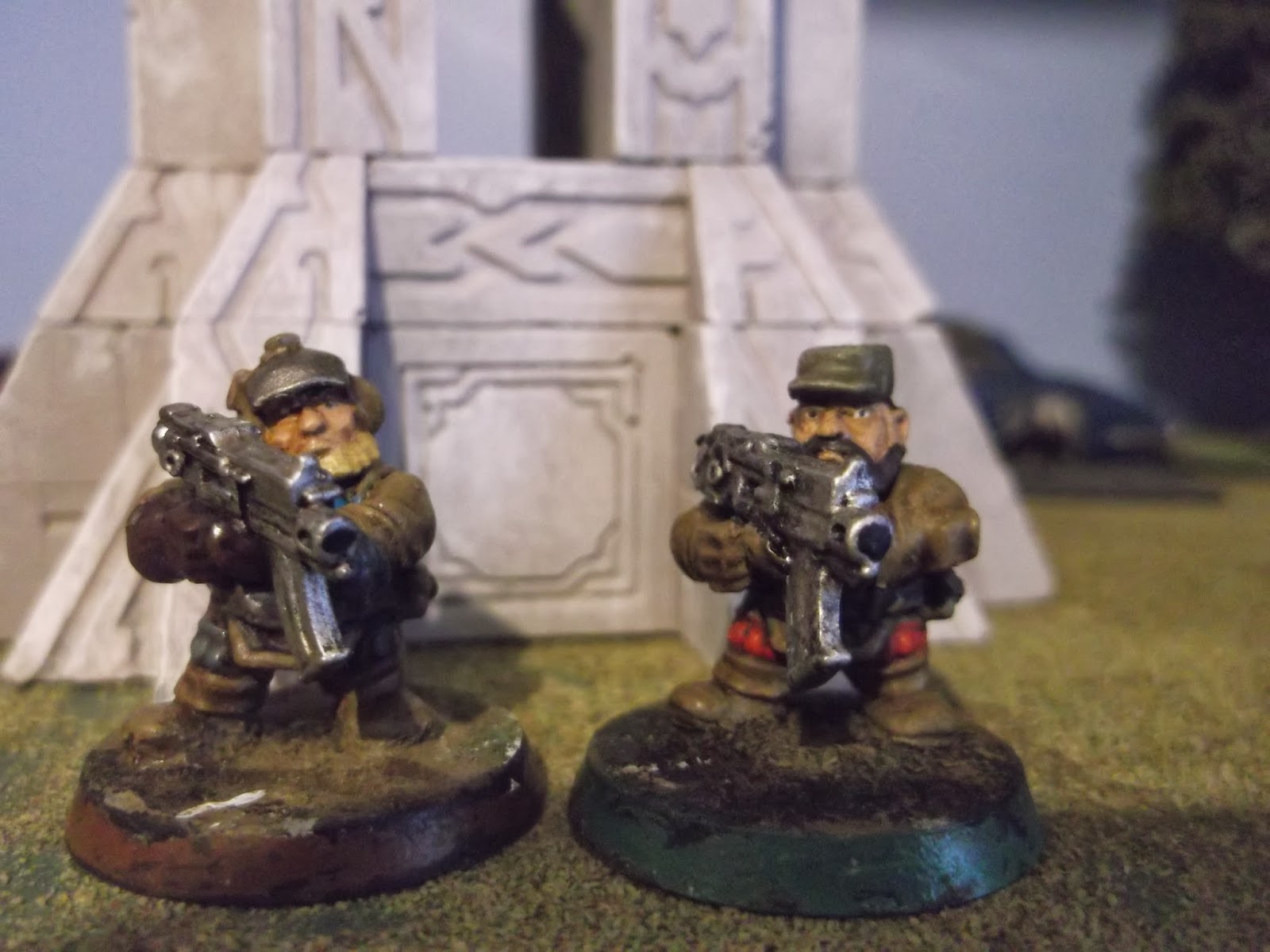 Couple of the plastic Troopers with RTB101 Bolters. 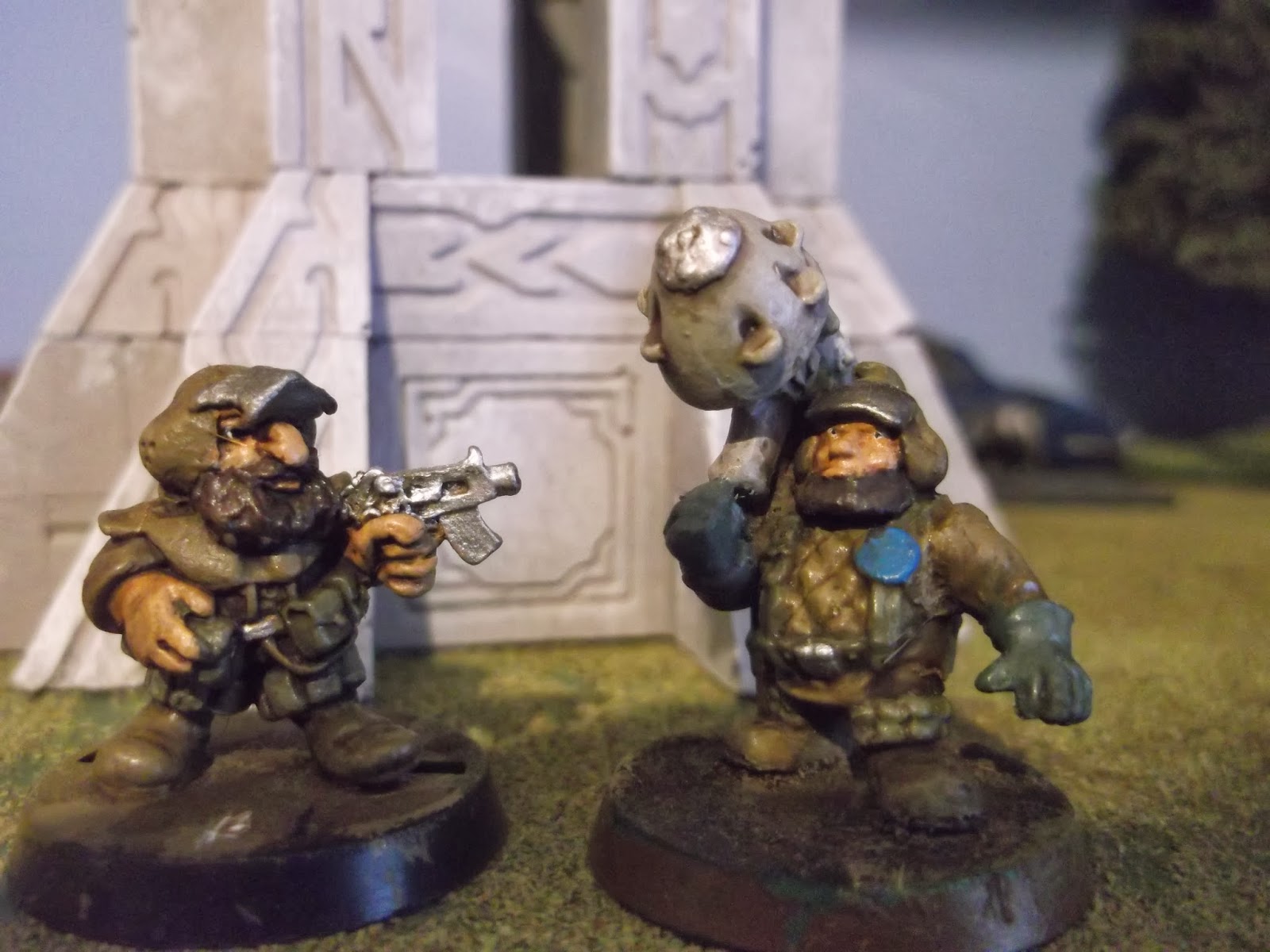 'Lee Hotchkiss', and a plastic Squat with metal Conversion Beamer. 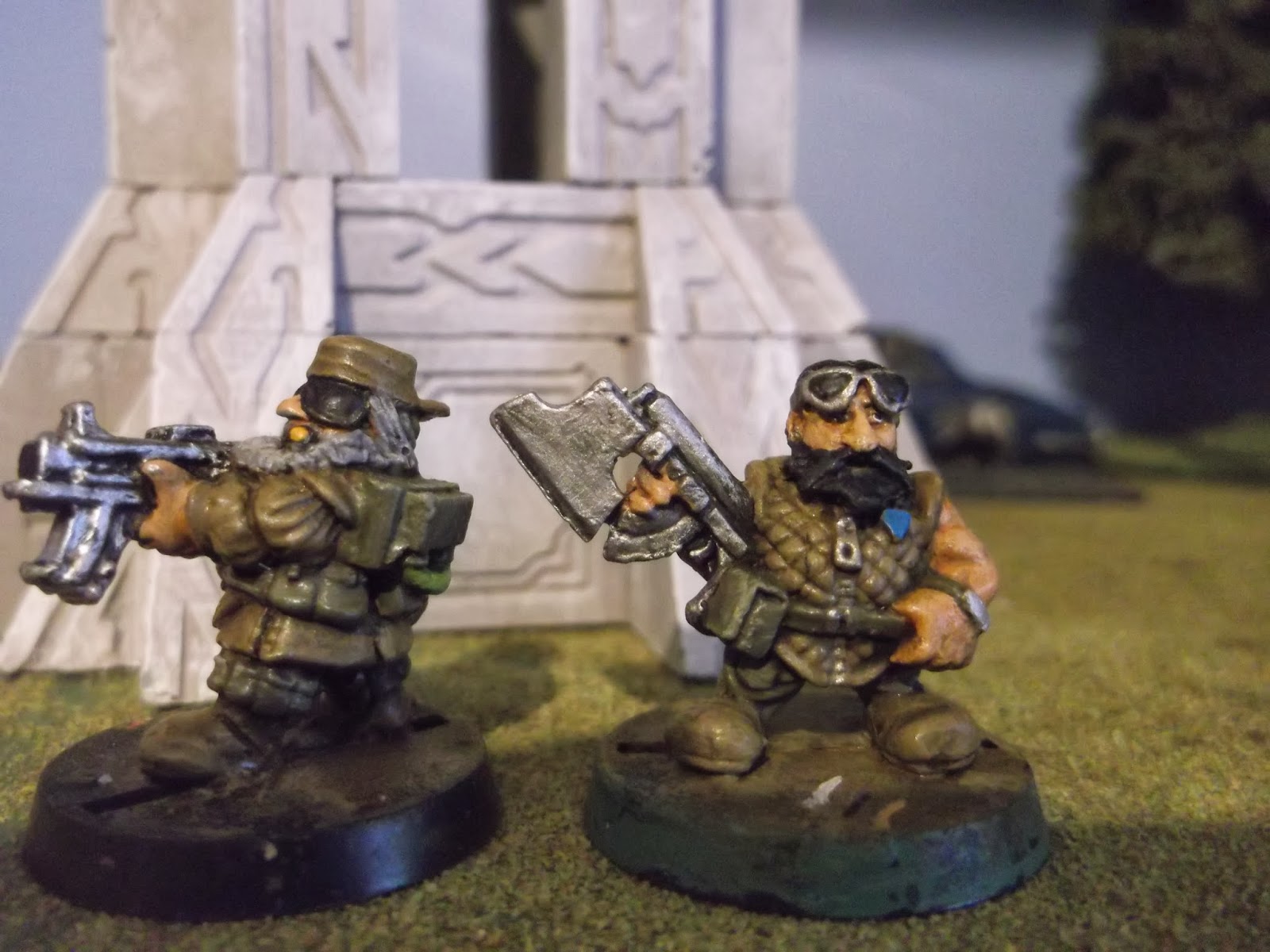 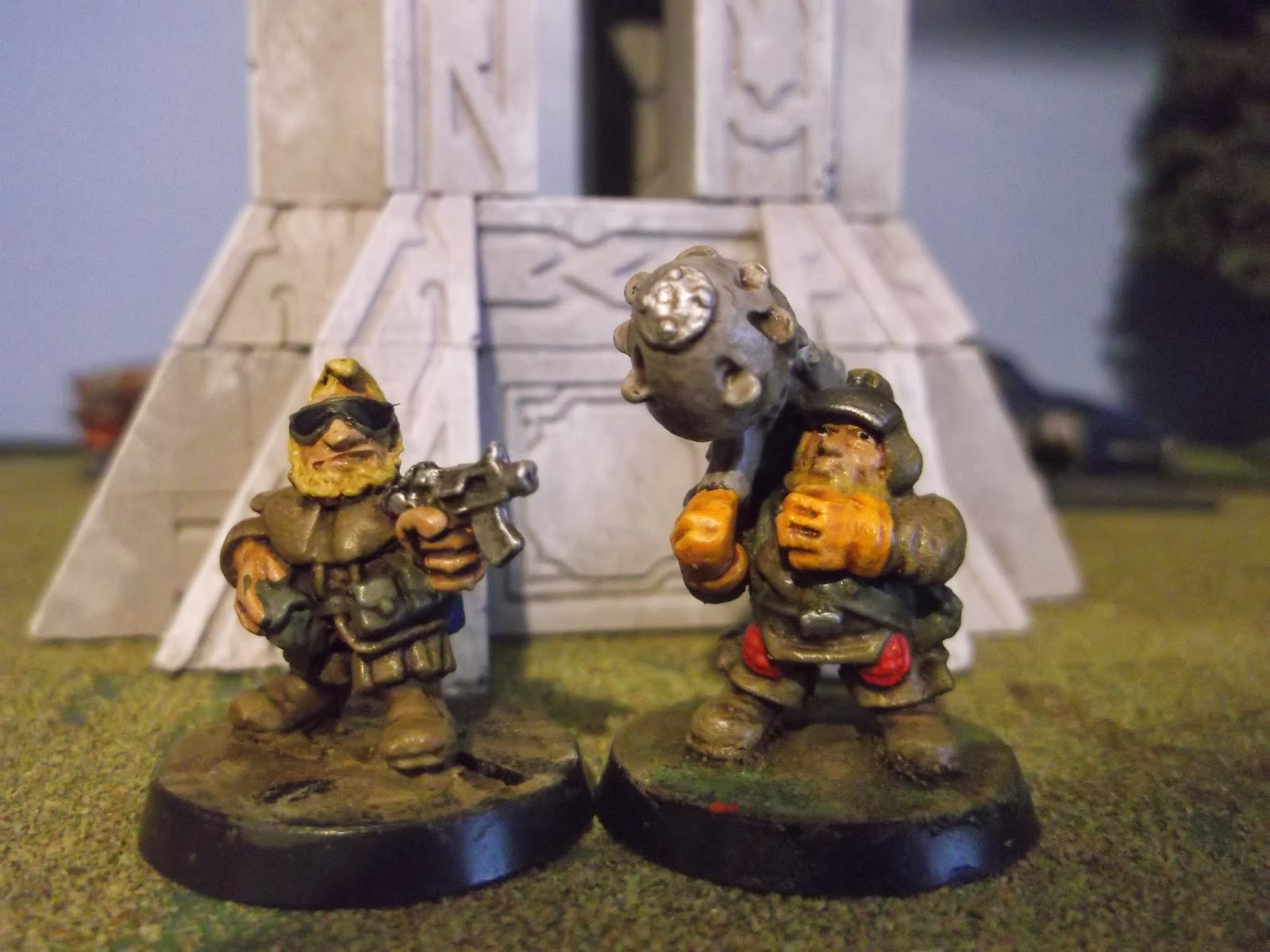 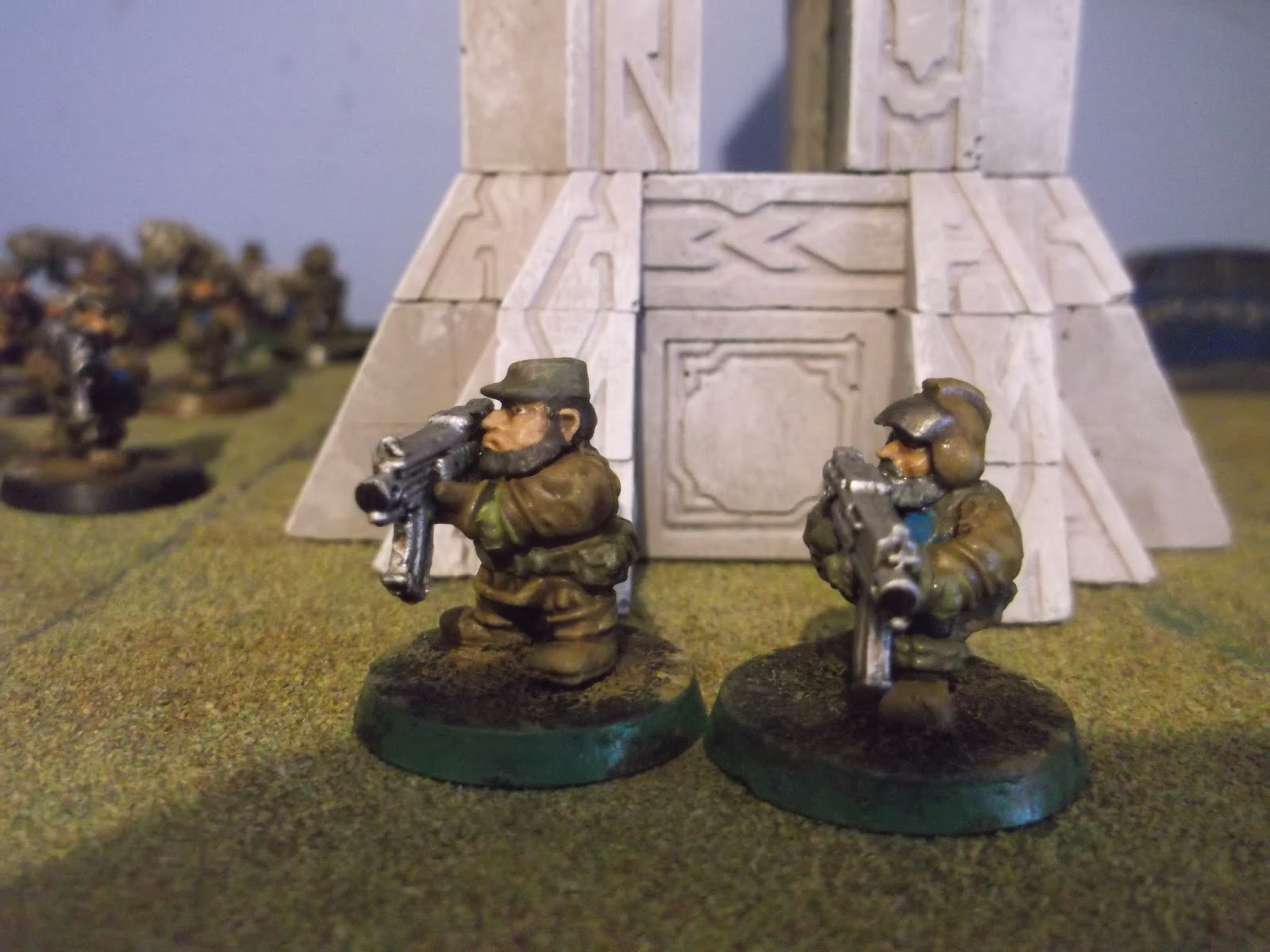 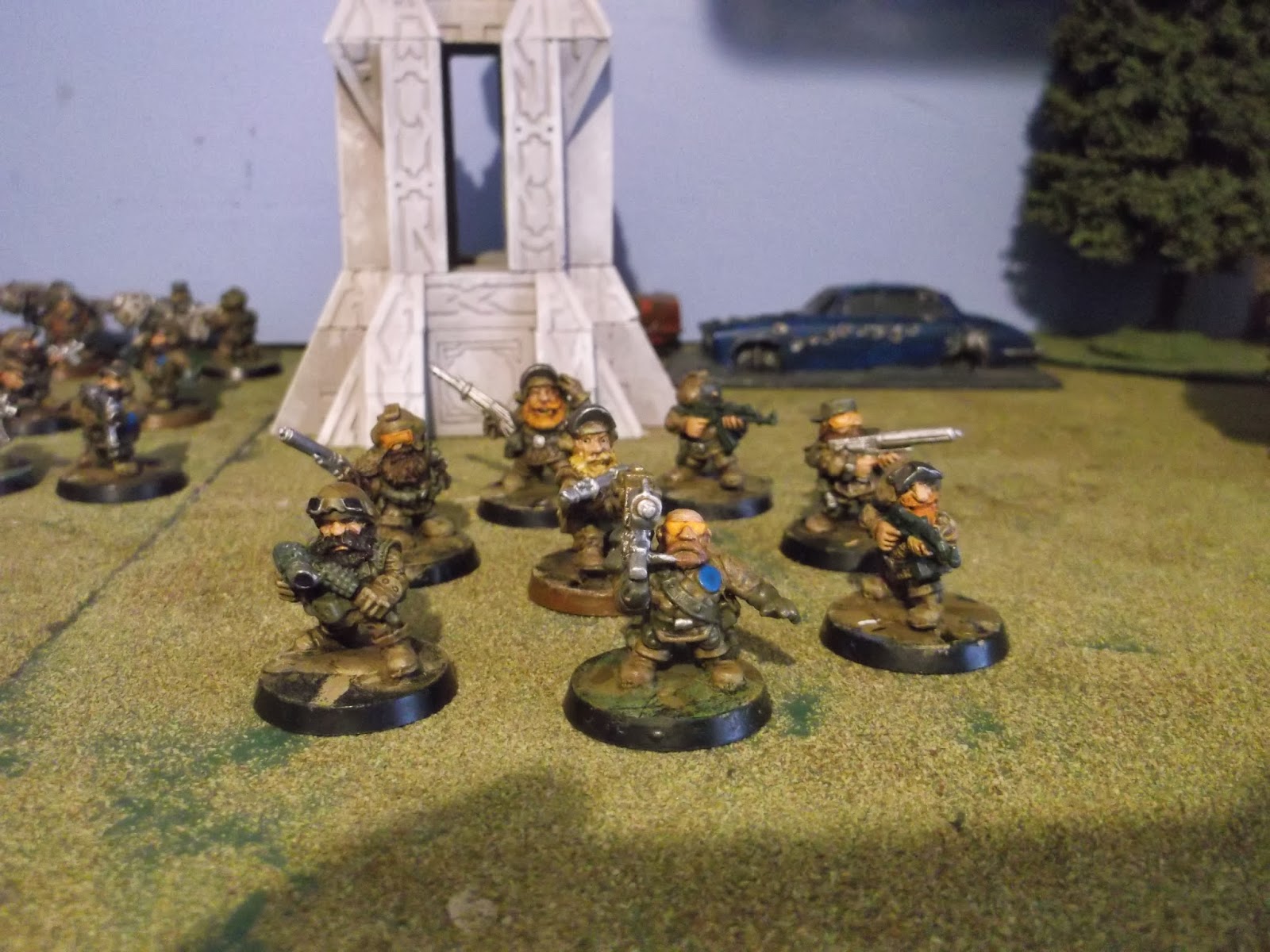 Brotherhood Five, Squad One.
This is the last of the Brotherhoods in the army. Each Squad is equipped with las-guns, one las-cannon, and the Squad leader has a las-pistol.
I prefer to have the Squat Troopers upgraded with Bolt gun for the extra 3.5 points per Squads, however I had a lot of Las-gun armed miniatures, so put them all in one Brotherhood. I gave the squads the las-cannon upgrade so they can act as anti-vehicle support, and having the las-guns means you are not wasting Str 4 bolter shots.
Ironically this is my favorite Brotherhood as the miniautres mostly metal, full of character, and look great. 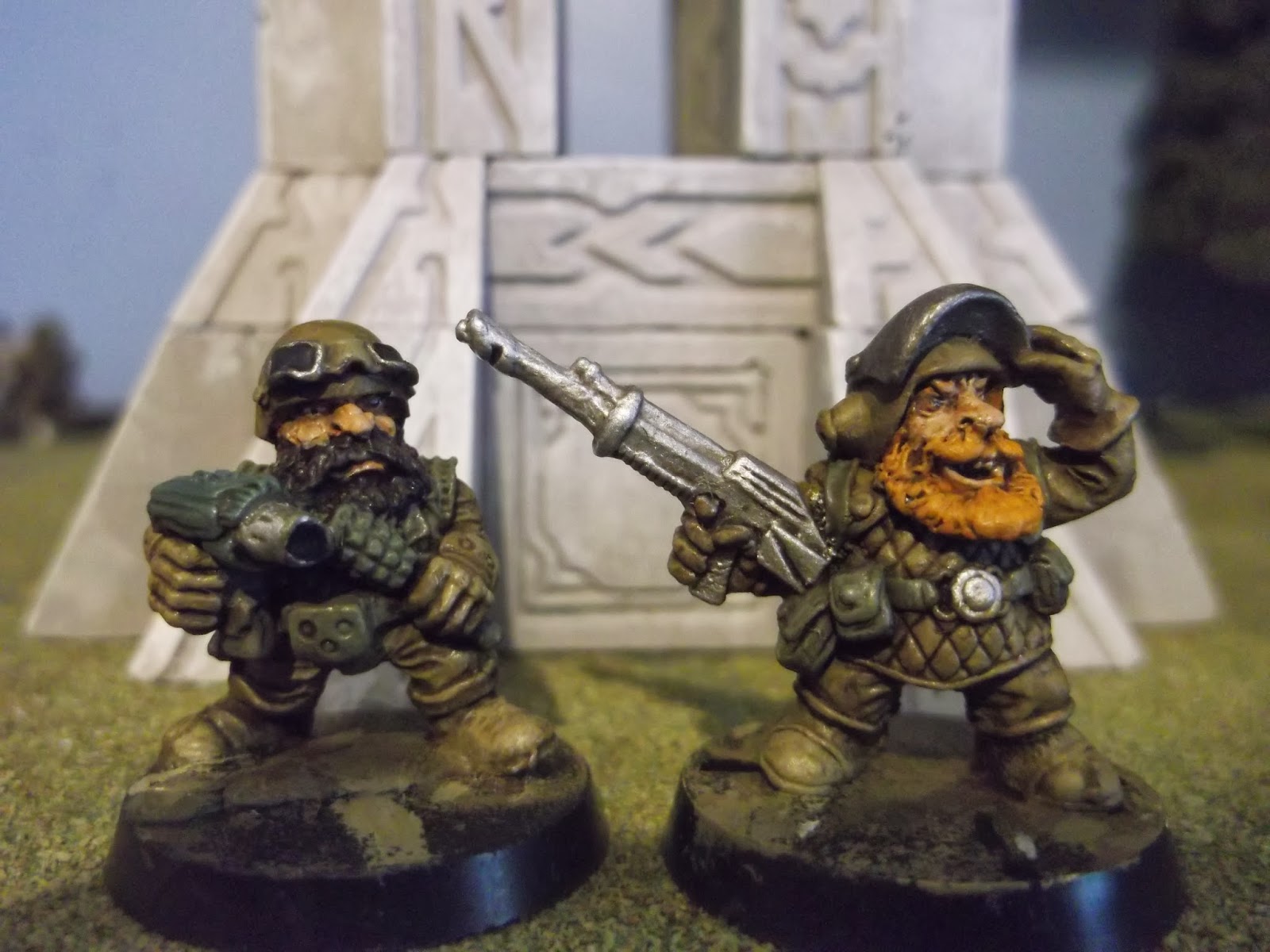 Squad leader and Trooper from the Iron Claw range.
I never liked the Iron Squats, and it stopped me from collecting a lot of them at the time. However, now I am painting them up, and much better than in 1989, I have gained a new appreciation for them. I think the problem is that they don't always look great unpainted and my mental image of Squats was from the first RT03 Space Dwarfs range shown in the in the Rogue Trader Rulebook. Also when I was putting together an army for gaming at the time, they weapon options did'nt always seem to fit with the army list. 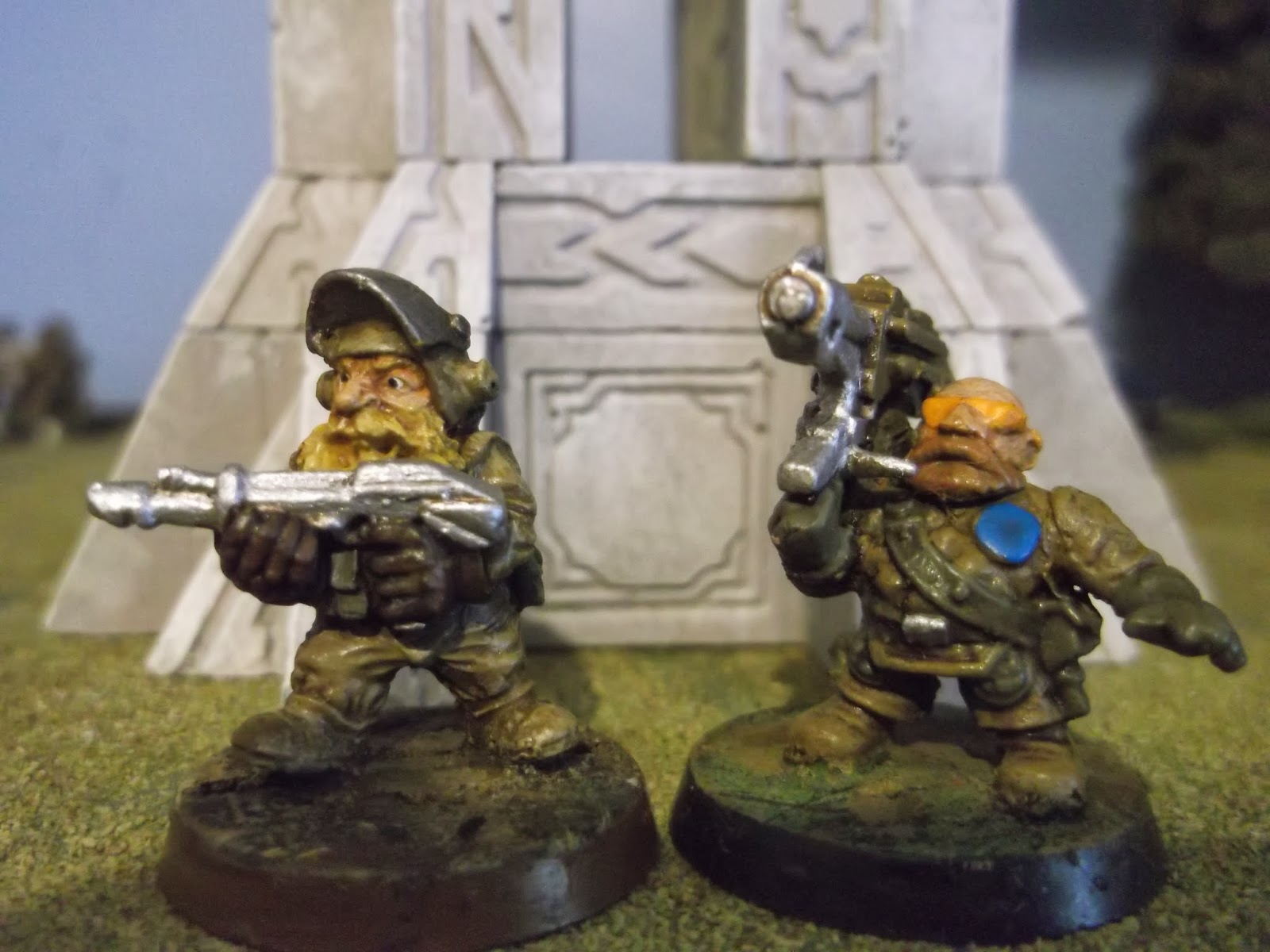 Another Iron Claw Squat, and a plastic Squat with plastic Las-Cannon from the Imperial Guard box set. 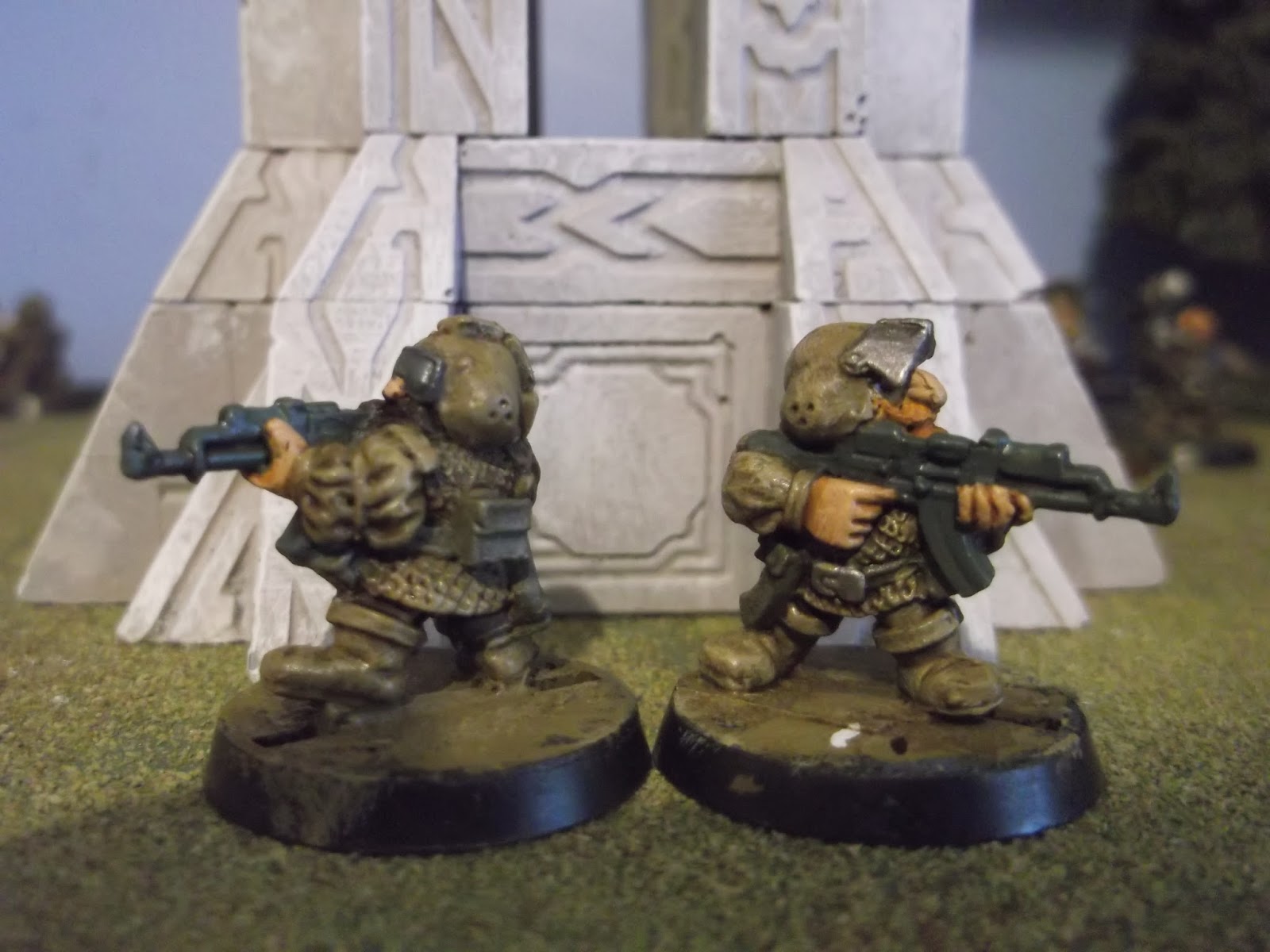 'Luger Gerlich', and 'Gal Von Benko'.
They both have the very 'AK47' looking auto-guns that some of the RT03 Squats had.
Unfortunately they can't use them as such in the army lists, which is a shame as the extra range over the las-gun was always handy. 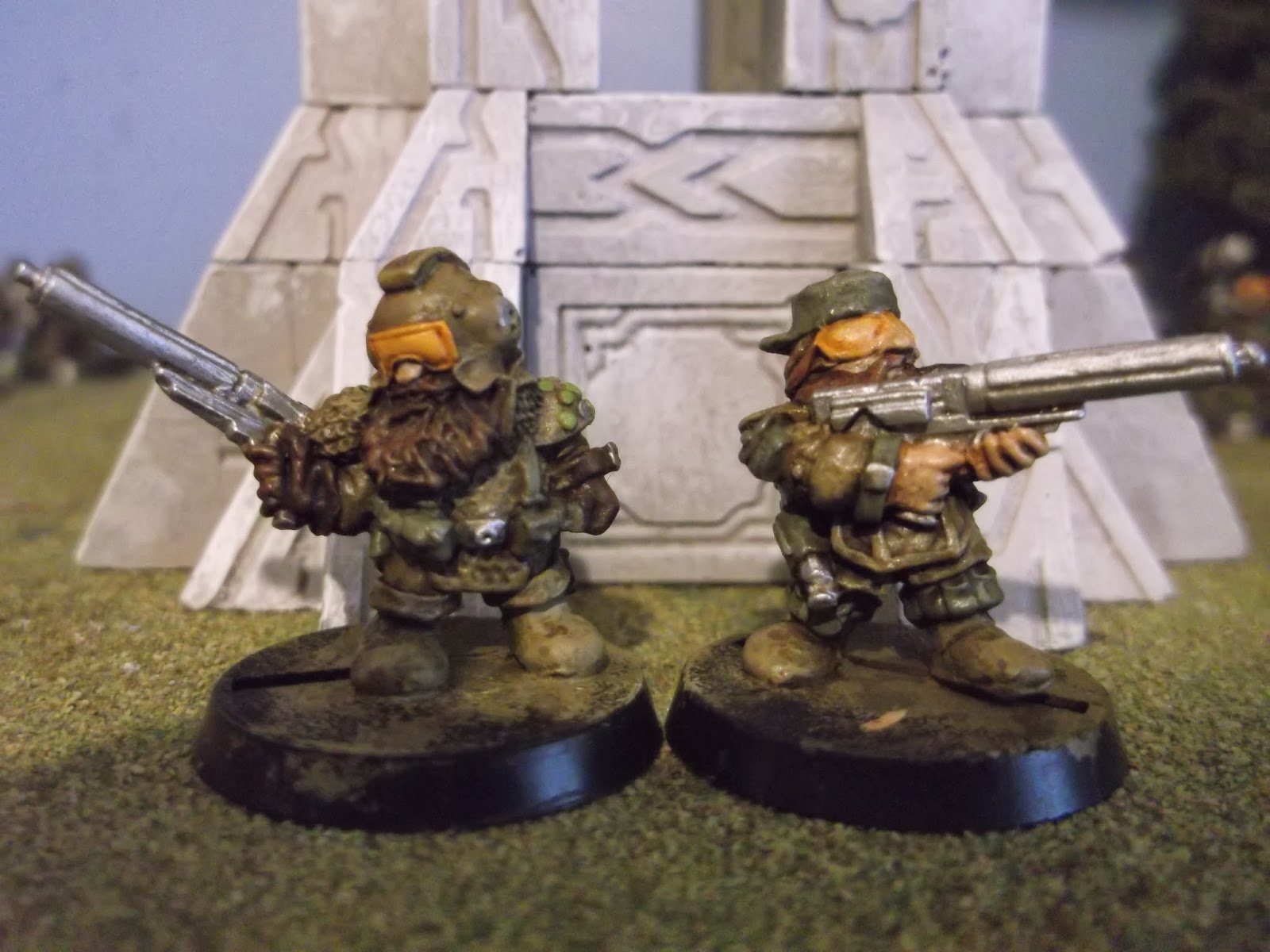 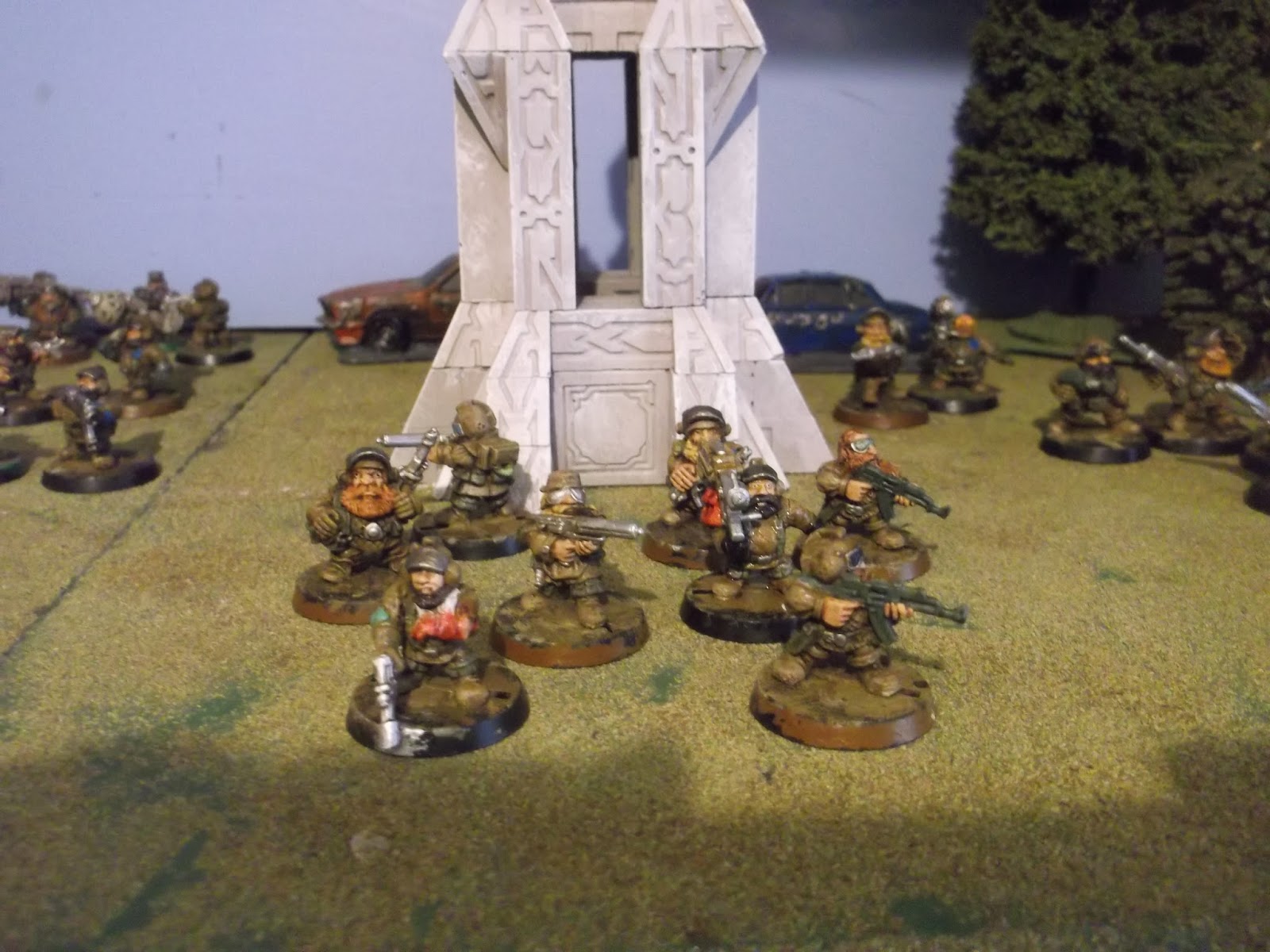 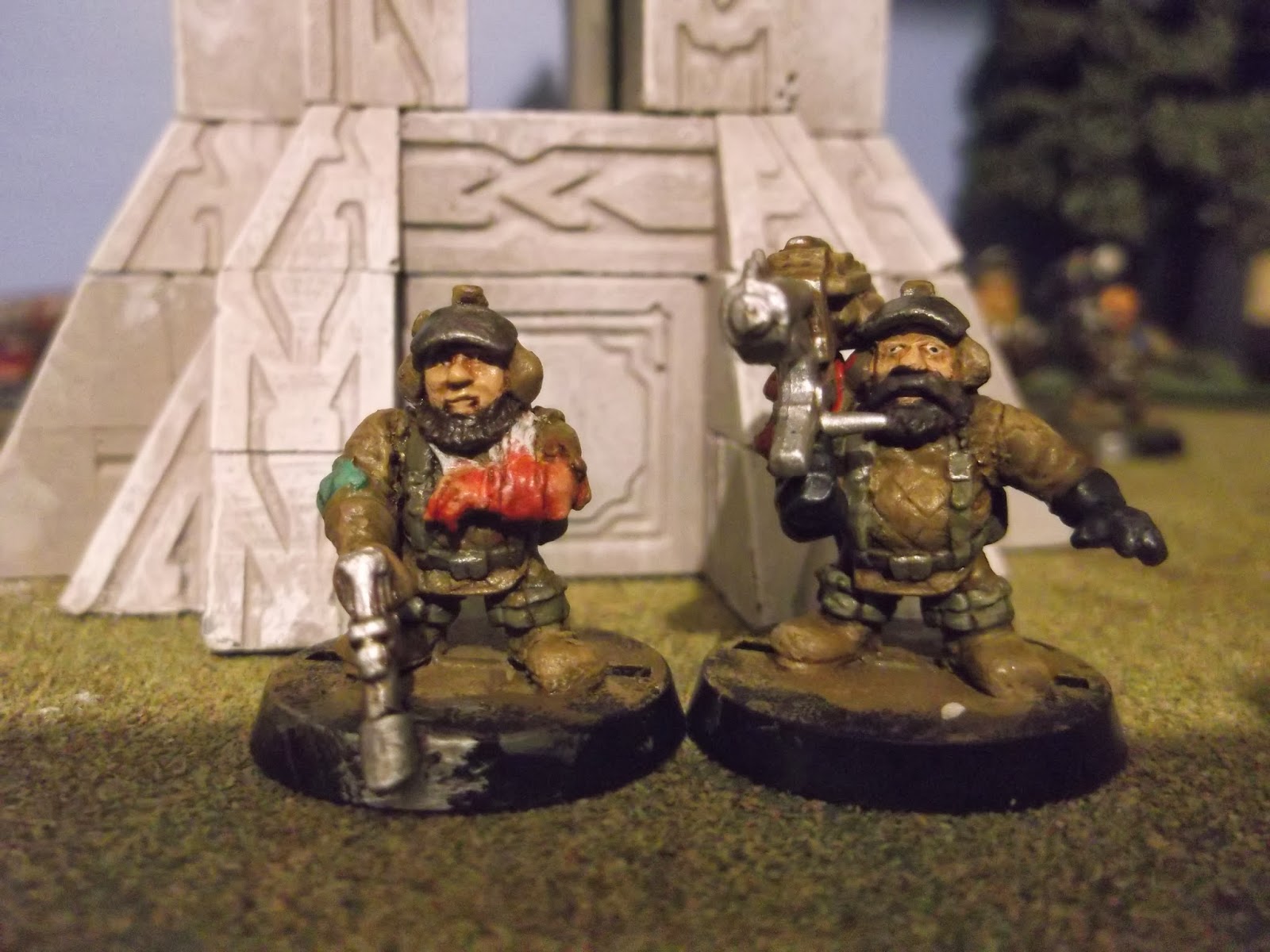 Metal Squad leader and heavy weapon Trooper from the Perry's designed release in 1989 that came out alongside the plastic boxset. Like a lot of thier ranges of the time they liked to add an injured model. 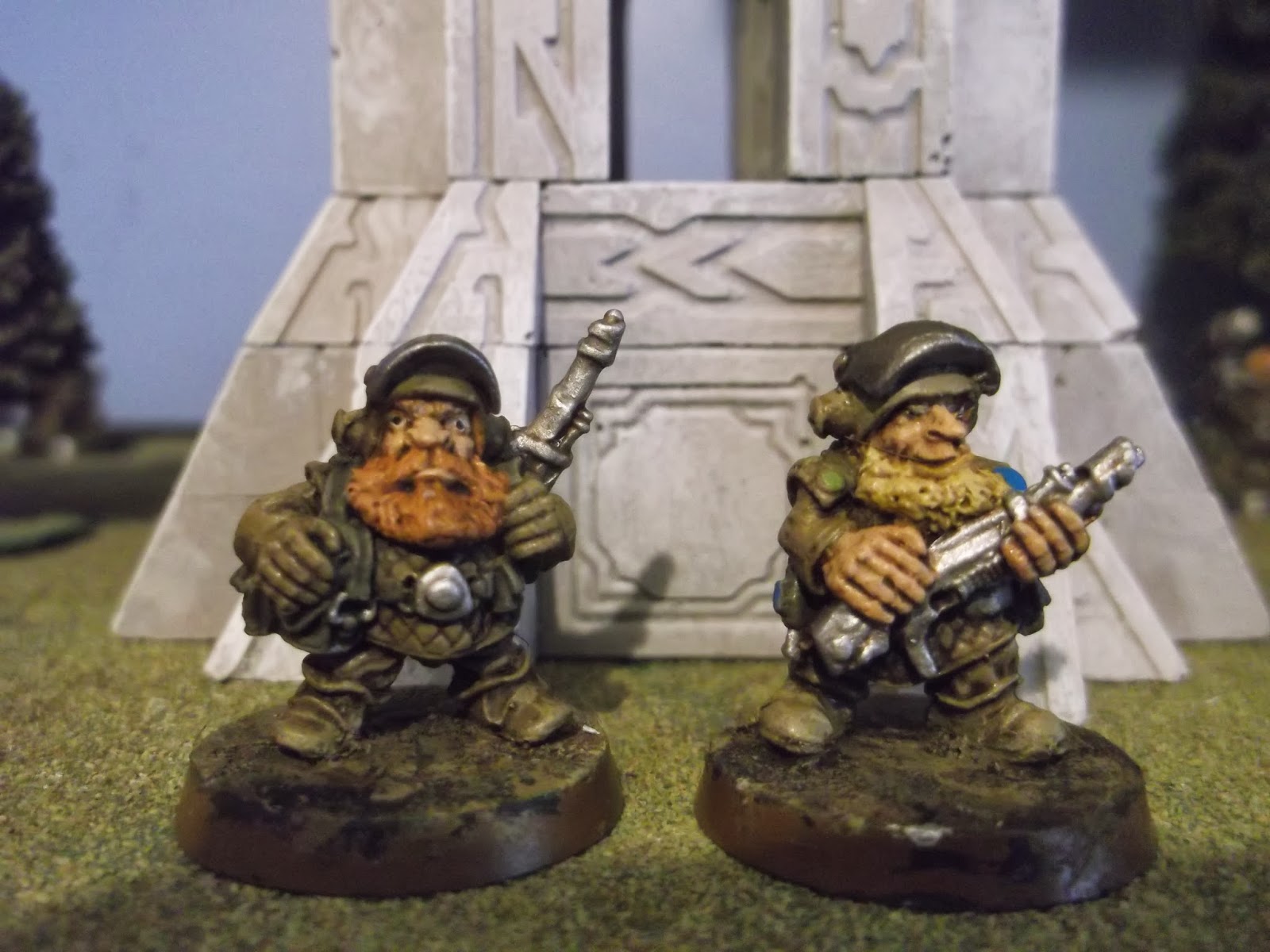 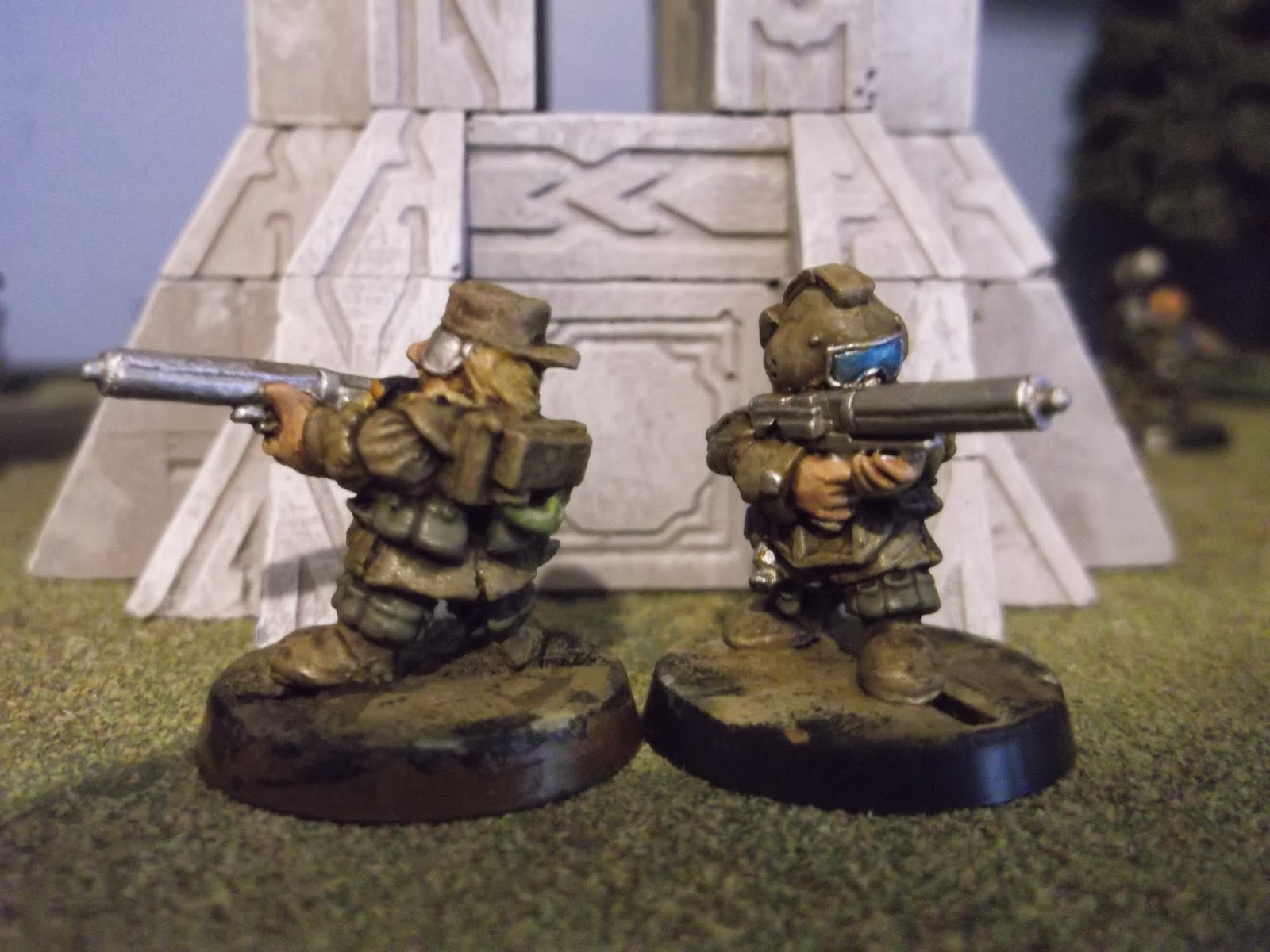 Another 'Lewis Gun', and 'Maxim Bang'.
Funny they are both named after early machine guns but have Las-guns! ;) 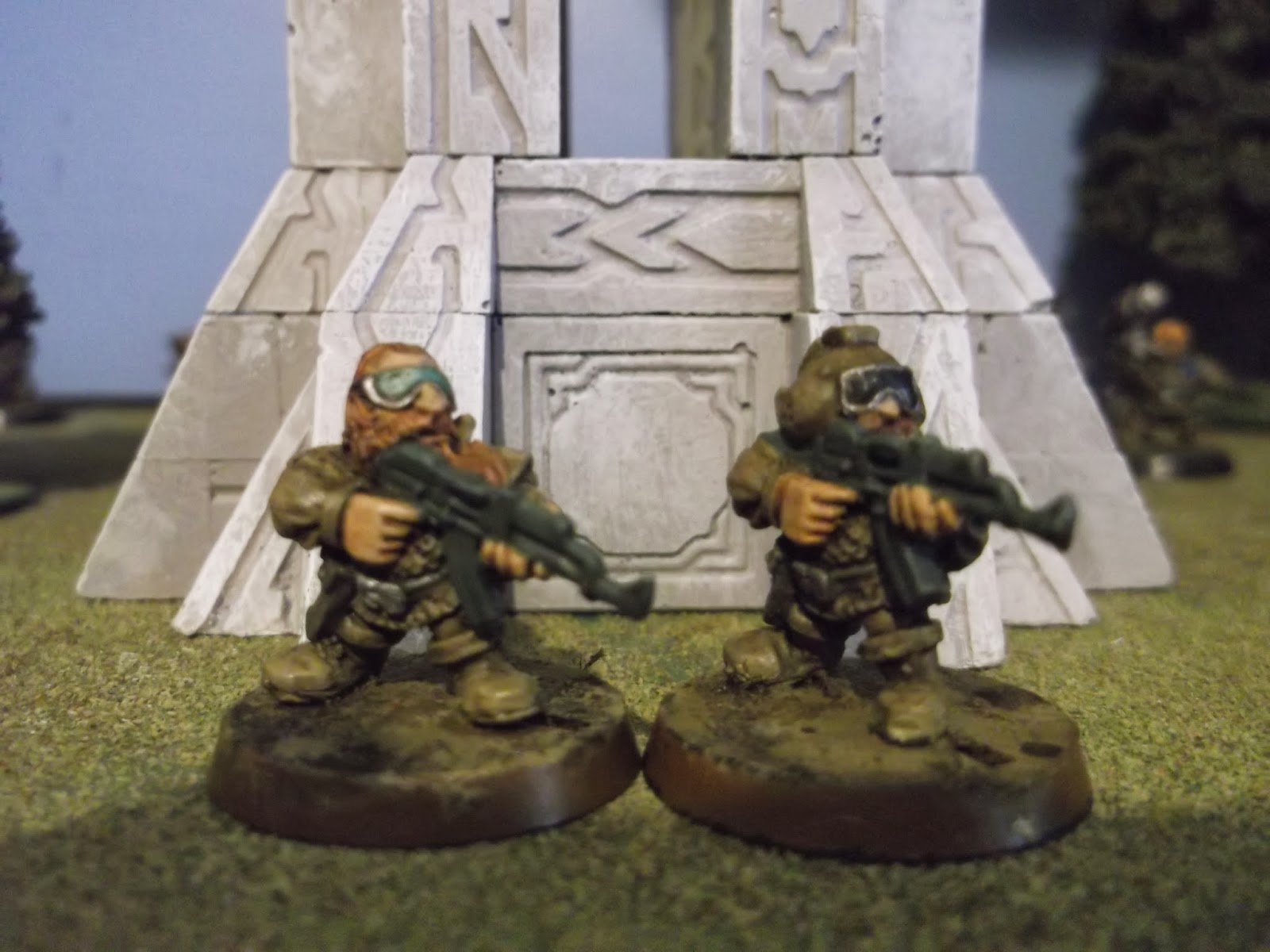 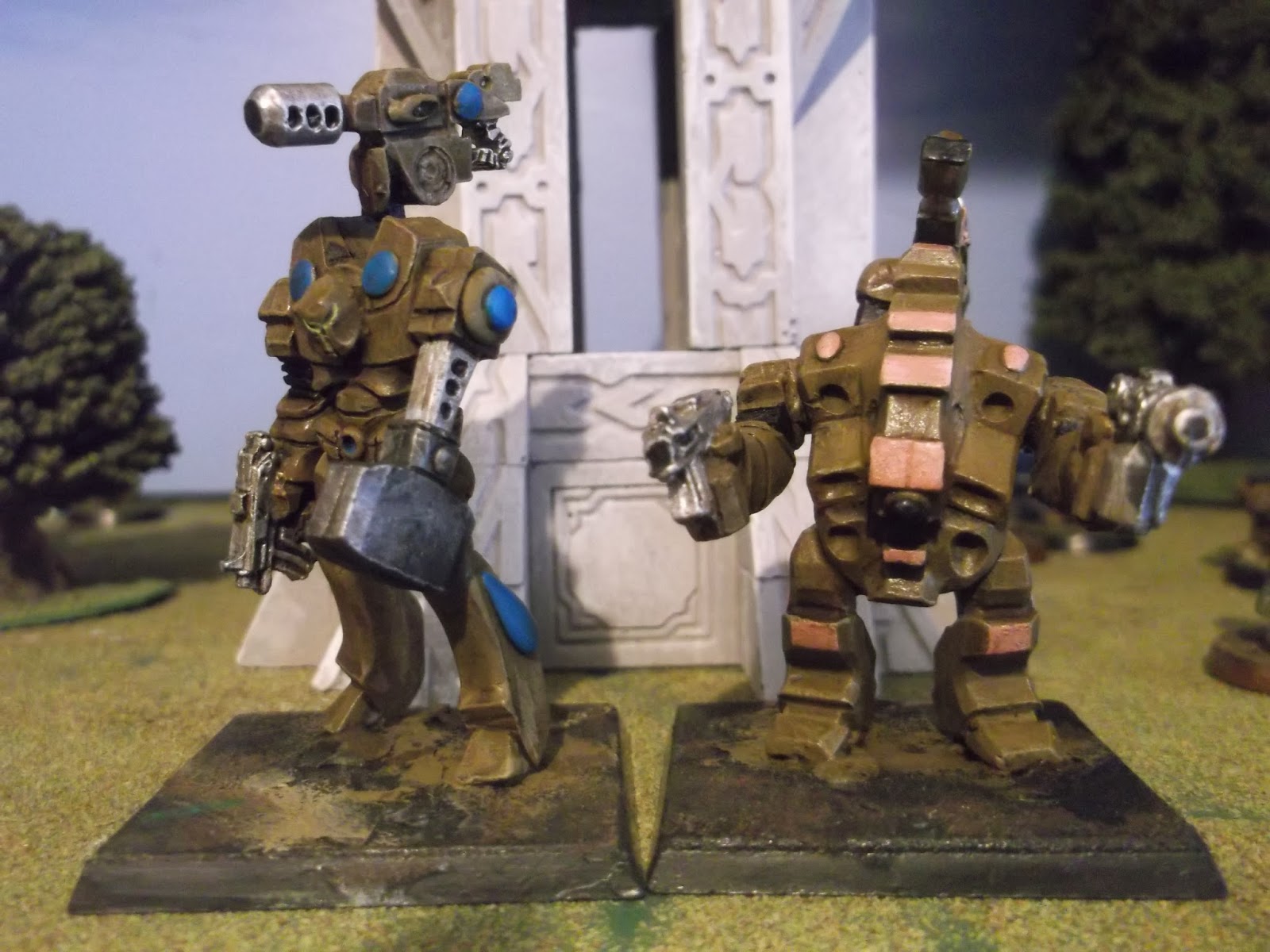 Robots: not newly painted but it was pointed out to me by Asslessman that they look like Mr & Mrs Robot.
So I shall name them Sheldon and Amy :)

This week shall I hopefully finishing off the last Combat Squad and the Warlords/Hearthguards, and maybe the Commisars and Bombots.
Posted by Goblin Lee at 14:31